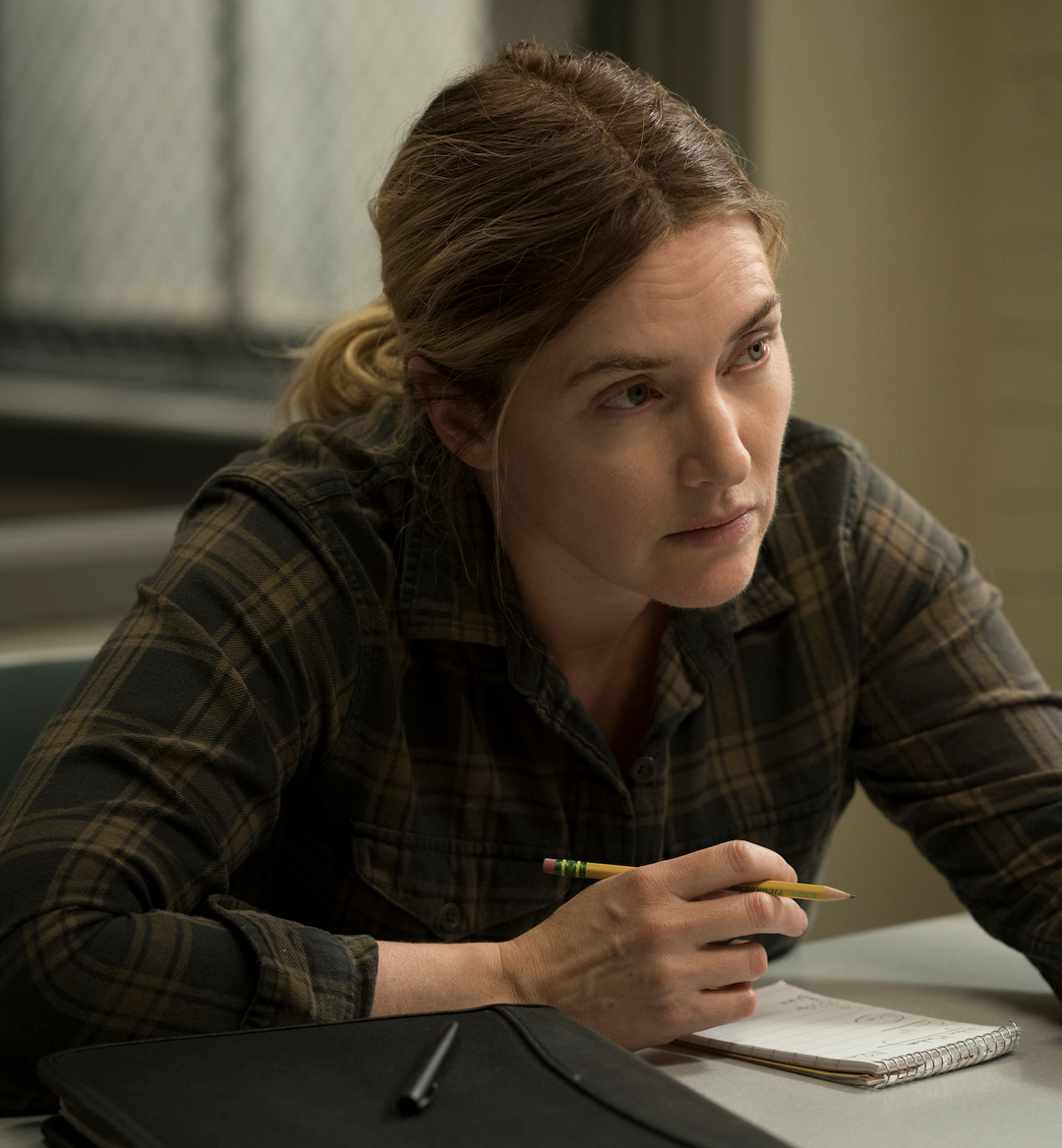 Someone grab me a hoagie, a Wawa coffee, some ritz crackers, a can of spray cheese, a cheesesteak, and a six-pack of Rolling Rock because I'm still drowning my sorrows over the fact that Mare of Easttown has been off the air for over a year.

This series had a hold on our lives like no other, gluing us to the television each Sunday night and to Twitter the next morning. Now, there are only two ways to fill this massive gap in our lives: one, to rewatch the series, and two, to find something to replace it with. Given that I've already rewatched the series an embarrassing amount of times, we've assembled 25 shows like Mare of Easttown for when you need a good hoagie break.

Throw in a murder with a cast like this and you're bound to get something earth-shattering. At the beginning of the first episode of Big Little Lies (which is based on Liane Moriarty's novel of the same name), we're blindly clued into a murder occurring without any of the vital, accompanying details. The entire first season retraces the steps leading up to that murder, with each puzzle piece slowly falling into place.

With the highest rating of any show on this list, Yellowjackets is a multi-faceted mystery rolled into a murder rolled into a plane crash. Basically, in the '90s, a team of high school girls become stranded in a remote forest after their plane crashes on the way to a soccer championship game. Switching between the crash site in the '90s and their present-day lives, it's clear that something much more sinister went down in that forest.

Based on the book of the same name by Celeste Ng, Little Fires Everywhere pairs up Reese Witherspoon and Kerry Washington as two very different characters whose paths become intertwined in their town of Shaker Heights, Ohio. At the beginning of the series, we know that a massive fire breaks out in a house, but we're not entirely sure of what exactly causes it, which is what the series is all about.

Sharp Objects explores the tense relationship that journalist Camille Preaker (Amy Adams) has with her estranged family as she travels back to her old hometown in an attempt to solve a string of suspicious crimes. It's a psychological thriller for sure, with Preaker becoming fully entranced in the crimes, making parallels between her own life and the victims'. Given this, it definitely makes Sharp Objects one of the greatest shows like Mare of Easttown.

5. 'Under the Banner of Heaven'

Focusing on the real-life murder of Brenda Lafferty and her infant daughter, Detective Jeb Pyre (Andrew Garfield), who's also a devout Mormon, takes charge of the case. However, through his investigation, he comes to a few other major realizations regarding the truth behind his unrelenting faith. While it wasn't as successful, Under the Banner of Heaven is definitely one of the shows most like Mare of Easttown as they're both constructed in the same manner.

Kaley Cuoco plays the notorious, alcoholic flight attendant, Cassie Bowden, who finds herself right smack in the middle of a murder case after she wakes up in bed next to a man whose neck has been slashed. With the cops on her tail and some personal demons of her own making the situation even more complicated, she attempts to clear her name with the help of her friends, Annie (Zosia Mamet) and Max (Deniz Akdeniz).

Inspired by the 1996 film of the same name, Fargo follows a new plot, cast, and murder investigation each season, which all takes place throughout various areas of the Midwest, just as the original film was set in Minnesota. The series has picked up tons of awards throughout its four seasons, including an Emmy for Outstanding Miniseries. On top of that, it's got a fifth season currently on the way.

The White Lotus took the world by storm during the summer of 2021 from its stacked cast to its absolutely chaotic and gripping plot. The only information we're given at the start of the series is that a murder occurs at a hotel; the rest of the show deals with retracing the steps of each guest to figure out who was killed—though more importantly, who was the murderer. Given the ever-changing nature of The White Lotus, it's at the top of the list of shows like Mare of Easttown.

Based on the real-life investigation into Kathleen Peterson's suspicious death that left her at the bottom of her home's staircase, The Staircase takes the findings of the case and the documentary of the same name and creates a live-action version of the events. Colin Firth stars as Michael Peterson, the husband of Kathleen who's thought to be the one who killed her.

Nicole Kidman and Hugh Grant star as Grace and Jonathan Fraser, a couple who become intertwined in a murder case. Prior to this, Grace was simply living her picture-perfect life as a wealthy therapist, though as each episode forges on, new details emerge, revealing that perhaps her life wasn't so perfect after all.

Who's in It: Nicole Kidman, Hugh Grant

This anthology series follows a different, well-known crime case each season; so far, the show has covered the O.J. Simpson case, Gianni Versace's assassination, and the impeachment of former president Bill Clinton. Just as each season of American Crime Story features a new case, it also brings on a (mostly) different cast, following the successful model of Ryan Murphy's American Horror Story.

Patty Hewes (Glenn Close) runs a successful law firm in Manhattan, but when a new protege, Ellen Parsons (Rose Byrne), comes along and joins the firm, the dynamic of the office shifts, creating a frenemy situation between the two. Each season of the thriller series deals with another case, with each ultimately leading to quite a few people dying on suspicious terms in the process. With as strong a female lead as Glenn Close is, it's obvious why Damages is on a list of shows like Mare of Easttown.

A revamp of the original Perry Mason series that ran from 1957 through 1966, Matthew Rhys portrays the eponymous role as the iconic 1930s private investigator and defense lawyer. Set in Los Angeles during the tail end of the Great Depression, Mason has to solve a kidnapping case all the while dealing with his own personal struggles along the way.

Much like American Crime Story, this anthology series also features a new crime case each season, fit with an ever-changing cast and setting. The series has been lauded by critics, winning and being nominated for quite a few awards; it's also got a fourth season coming our way, which is set to star Jodie Foster.

Mark Ruffalo takes on the role of a pair of identical twins, Dominick and Thomas Birdsey, who are deeply interconnected yet incredibly different at the same time. Though Thomas has paranoid schizophrenia, he's able to manage his symptoms fairly well with medication, though after he has a particularly rough schizophrenic episode one day, Dominick has to figure out how to get his brother released from the mental hospital that he's being held in.

Bloodline tracks the tight-knight Rayburn family of the Florida Keys, which is helmed by their legendary patriarch, Robert (Sam Shepard). Kyle Chandler portrays his son, John, a detective in the area who finds himself in the middle of a familial mess when a few skeletons in their collective closet begin to make their way out.

Based on the Stephen King novel of the same name, The Outsider is a major genre-bender that combines the themes of mystery, thriller, crime, drama, horror, and sci-fi into one. After a young boy is murdered, those investigating the case, including Detective Ralph Anderson (Ben Mendelsohn) and private investigator Holly Gibney (Cynthia Erivo), realize that the investigation is even more complicated when supernatural things start occurring.

This eight-part miniseries stars Riz Ahmed as Naz Khan, a college student who has been accused of murder, as well as John Turturro as John Stone, who plays Khan's lawyer. It all takes place in New York City, and as the case becomes more and more convoluted, Naz attempts to take measures into his own hands while being held at Riker's Island.

A re-creation of the original 1945 film, HBO's Mildred Pierce is a five-part series starring Kate Winslet as the titular character. And for all the Mare fans out there, this series pairs her up with our favorite writing professor, Guy Pearce, who portrays Pierce's second husband, Monte Beragon. Is this listed as one of the main shows like Mare of Easttown simply because of its cast? Well, perhaps. But aside from that, both shows have a majorly strong-willed female lead, which makes the series just as deserving of its inclusion.

A show that didn't deserve to be canceled, Netflix's original series, American Vandal, tracks a novice pair of high school detectives as they try to solve a new (and absurd) school-related crime each season. While it's not one of the shows like Mare of Easttown that's extremely serious, it still lends itself to the whodunnit nature of the series.

Olivia Colman and David Tennant star alongside one another in Broadchurch, which finds two detectives, Alec Hardy (Tennant) and Ellie Miller (Colman), attempting to solve the murder case of a young boy found near a beach.

Cruel Summer takes place in the 1990s and follows Kate Wallis (Olivia Holt), a high school student who mysteriously disappeared, as well as Jeanette Turner (Chiara Aurelia), who takes over the former-popular girl's duties after she goes missing. The entire series takes place over the course of three years, focusing on the same day of each year in an effort to reveal new findings from both stories.

This British drama follows a staunch woman much like Mare named Catherine Cawood (Sarah Lancashire), who serves as Calder Valley's police sergeant. While dealing with the daily crimes and occurrences of her job, she's also wracking her brain around who's responsible for her daughter committing suicide. Out of all of the series listed, this is definitely at the top of the heap when it comes to shows like Mare of Easttown as the parallels between the two are practically endless.

Based on the Danish series of the same name, The Killing tracks a new murder case each season, though Detectives Sarah Linden (Mireille Enos) and Stephen Holder (Joel Kinnaman) are the mainstays throughout it all.

An AppleTV+ original series, Defending Jacob stars Chris Evans and Michelle Dockery as Andy and Laurie Barber, whose 14-year-old son, Jacob (Jaeden Martell) is being accused of murder. Based on William Landay's eponymous novel, the series proves to be even more high-stakes as Andy Barber also happens to be the assistant district attorney.

Watch on AppleTV+
Slide 1 of 3
Did you like this article?