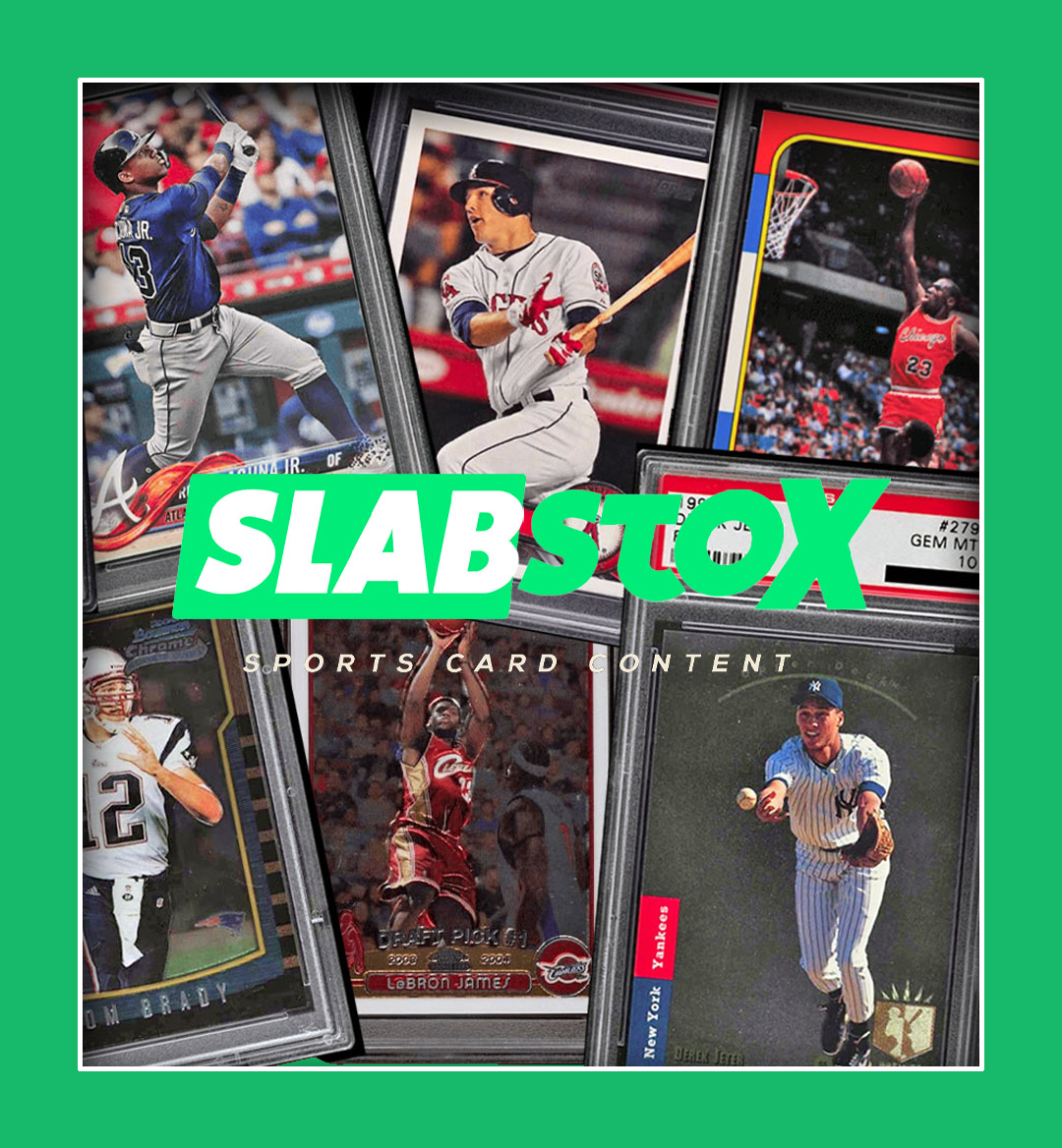 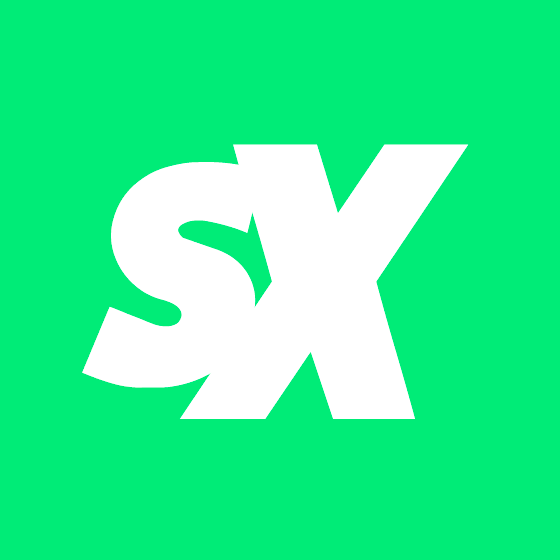 Aaron Judge and Albert Pujols gave us a record chase to remember, football’s young QBs are shaking out and there are some new superstars on the court and card buyers are noticing. Quarter 3 of the 2022 calendar year has come to a close—football cools down as basketball and hockey heat up. Here’s what we're talking about in this months SlabStox Card Market Report:

Join the CardTalk/SlabStox Pod. SlabStox and CardTalk collab each month to dig deeper into our SlabStox card market report, bringing you debate, analysis and fun. Stay tuned to social media for updates.

If you want to receive this SlabStox Card Market Report every month in your inbox, subscribe to SlabStox’s Daily Slab newsletter,

Baseball enjoyed more than one moment in the spotlight in September. Home run sluggers Albert Pujols and Aaron Judge owned the sports (and sports card) headlines as each chased milestones from the plate and proved hitters can still crush the ball and record books post steroid era.

It’s been a long time since we could cheer players approaching these milestones. Pujols became the fourth player to hit 700 home runs in a career, the first since Barry Bonds did it in 2004. Pujols did it in style, hitting both 699 and 700 in the same game (9/23/22).

Judge kept us hanging a bit longer. After hitting his 60th home run mid-month, he went seven games without a dinger until September 28 when he tied Roger Maris’ Yankee (and AL) record of 61 against the Toronto Blue Jays.

Both players were in the white-hot spotlight—their card sales have been impressive (however, think twice before jumping into this hot market as it is likely to drop): 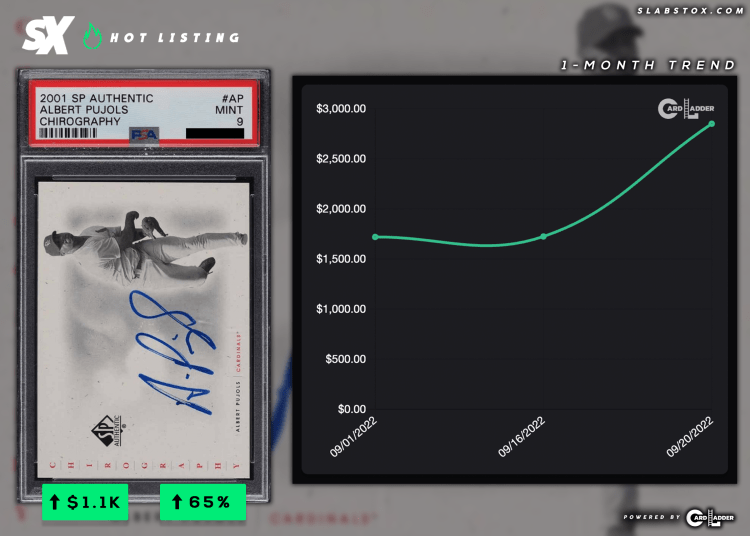 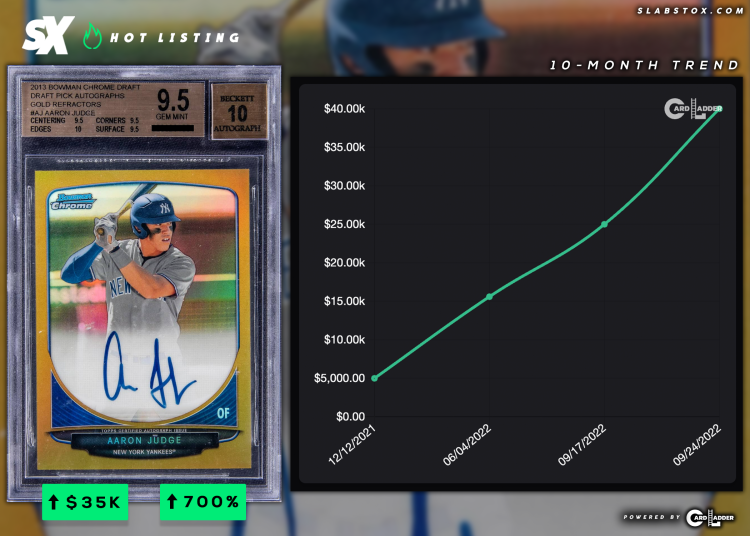 In a time where finding cards increasing is difficult, Judge and Pujols aren’t only beating the odds, they’re CRUSHING the odds. Records and milestones matter for legacies, and both of these players are adding to theirs. When it’s all said and done, big legacies create long-term collectors. Pujols is there, and Judge is well on his way.

Take 2: Young QBs emerge beyond Mahomes, including a $1M sale

The chase for the next GREAT quarterback has grown to a fever pitch in recent years and the start of the 2022 NFL season was no different. The run up for young QB sports cards went exactly as expected — wild speculation and investment (which some would call gambling).

No card sale reflects that more than the Justin Herbert 2020 National Treasures NFL Shield RPA 1/1, which sold for $1,800,000 on auction on September 10 (one day before the 2022 NFL Sunday kickoff), outselling a Michael Jordan/LeBron James/Kobe Bryant 2006 Exquisite Triple Logoman 1/1 in the same auction by more than $120K. That’s astounding considering this is a card of a third year player yet to make a playoff game, and it outsold many of the most important sports cards ever made. 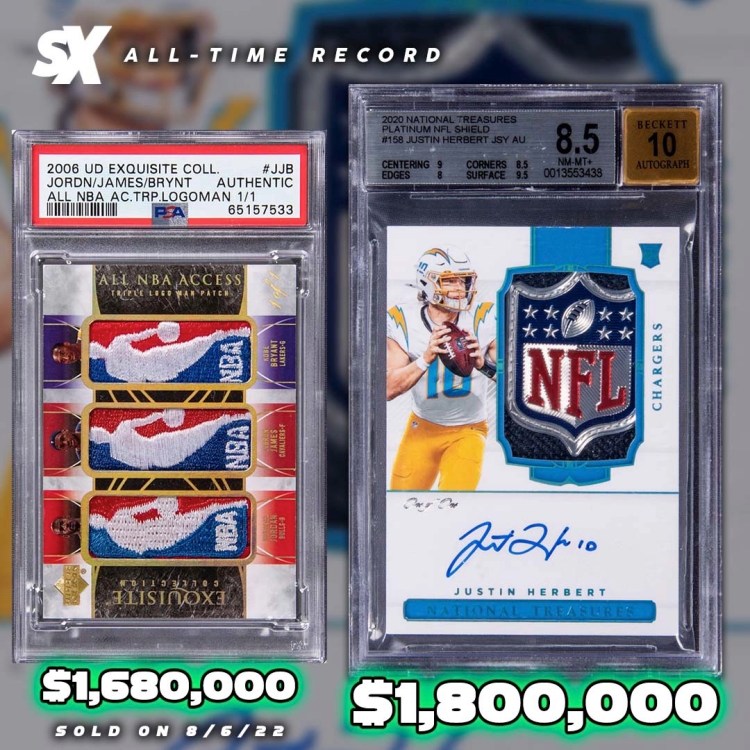 While the football market has expanded beyond QBs, the most hype is always focused on QBs trying to take the next step, either making the Super Bowl or contending for one in the near future. That, plus strong performances in the opening weeks created some quick risers on the QB chase list. Top players in September:

While some quarterbacks emerged to turn profit for collectors, more quarterbacks have fallen into the “loss” category. Trey Lance and Mac Jones’ injuries combined with some poor performances crippled their markets. Justin Fields’ straight up inability to throw a football has tanked his market

Jones and Fields’ 2021 Prizm Silver RC PSA 10s decreased 33% in September, with even bigger losses since the summer. The decrease doesn’t only represent their lack of success, but also the increase in the PSA population report leading to more supply on the market.

Trey Lance’s injury was our first glimpse this season at how an injury affects a card market. The result of the injury combined with an already declining market from the huge hype prior to the season is… not pretty. 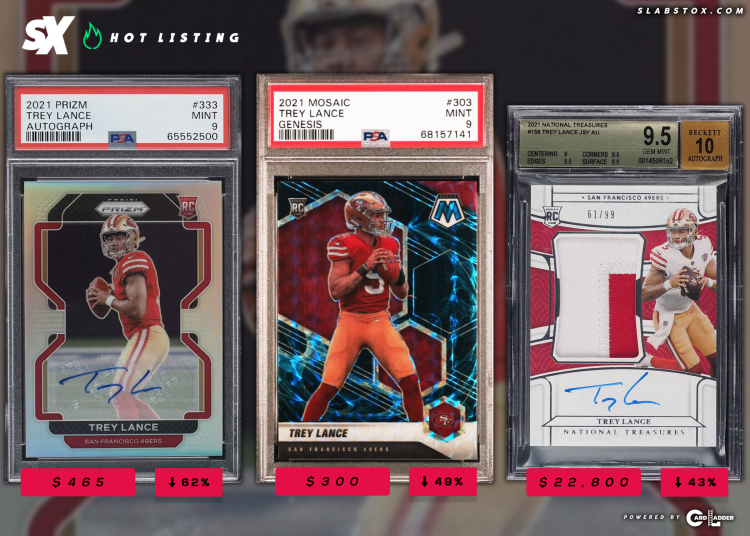 Keep this bit of knowledge in your back pocket for next year’s football season kickoff. Every year we see wild speculation in the quarterback market, particularly for strong QB classes (i.e. 2018 and 2020). However, only a few will pan out, and by Week 3, those who don’t drop like a rock. Be careful. Look into players who you believe are on the verge of taking the next step toward greatness. Often, that comes down to quality players surrounding the QB and a little luck escaping the injury report.

Take 3: Tennis—a new card market after the US Open

The US Open concluded on September 11, and this year’s event included some of the most powerful stories the sport has seen along with a most timely “product” release. This years US Open provided momentum for the tennis card market: 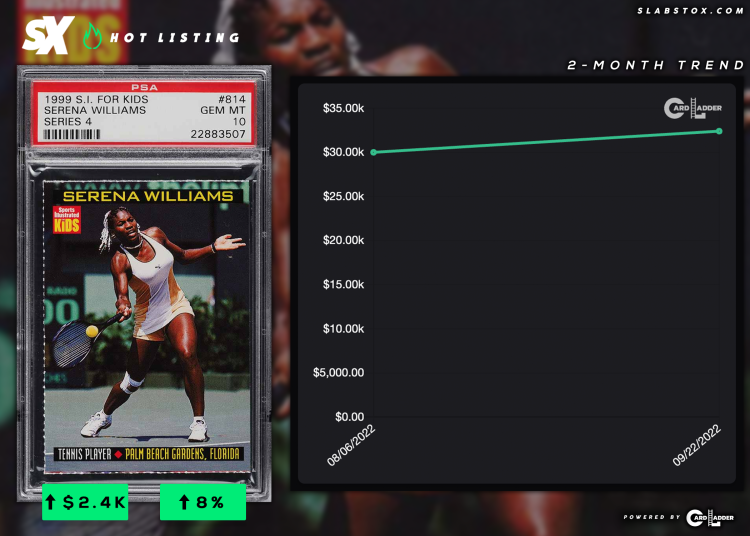 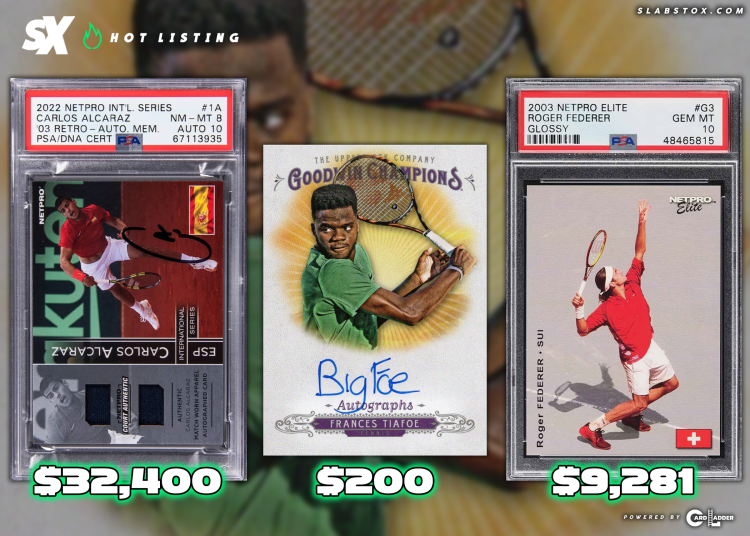 Exercise caution with big increases in categories like tennis. The overall supply of these cards is very small compared to the major sports, so it doesn’t take much demand to increase the top chases. Once that short-term demand is satisfied, the resulting sales have a potential to drop in price. That’s not to say tennis doesn’t have a long-term future in the sports card market, as it is a global sport with a large following.

Take 4: Other indexes may indicate rough card market ahead 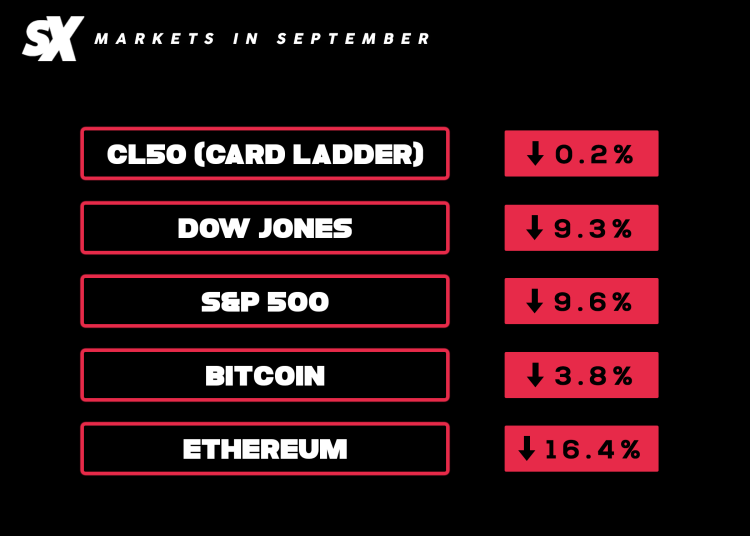 As stocks take a beating with rising interest rates to control inflation, the Card Ladder 50 (CL50), a representative index of 50 highly transacted cards to reflect the overall trading card market, has remained steady, losing only one-fifth of a percent in September. During the third quarter, the CL50 increased 14.31%, but it dropped 0.94% for the year.

What does this mean? If you’ve read past market reports, you’ll know the card market and the CL50 often “lag behind” other markets, sometimes by a month or more due to the time it takes for transactions to occur. When we update these numbers after October, there is a good chance we might see some of the stock market drops take effect in the card market. 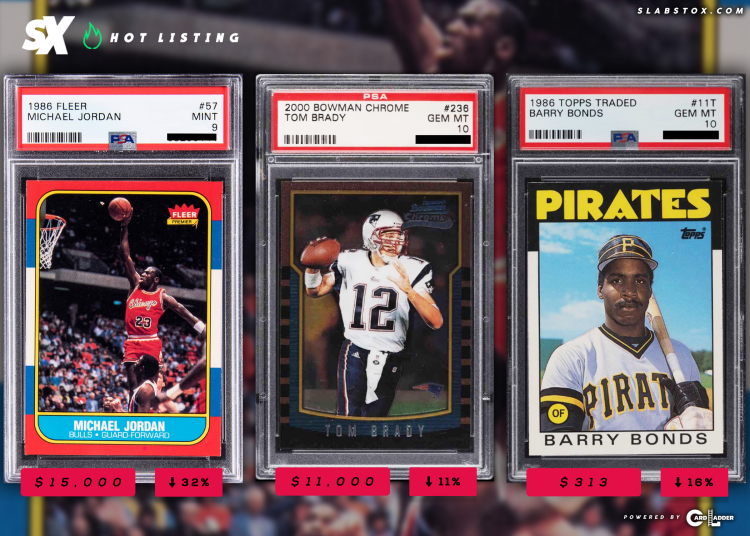 While the CL50 shows stability overall, some cards took huge hits. The MJ 1996 Fleer PSA 9 that was sitting at $28,000 one year ago has been nearly cut in half, as it reached its lowest point since August of 2020. In the month of September it lost 32% of its value. 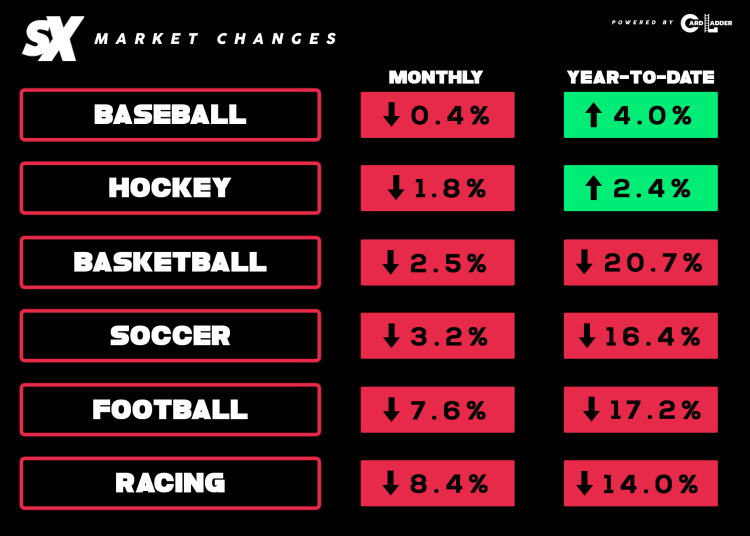 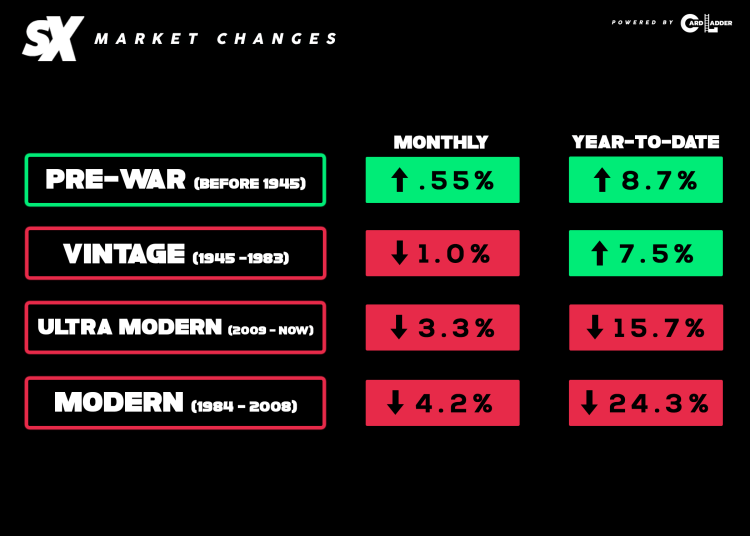 For perspective: We discussed in last month’s Market Report episode how in the future, we most likely will see Pre-War and Vintage start to turn red. The Vintage index decreased 1%, while Pre-War saw marginal gains. It’ll be interesting to check-in on this in six months.

Make sure you’re always paying attention to which sports are hot and which sports are not. This might not always play out, but more often than not, what’s hot at the moment will be cool six months later (see, Racing and Football). 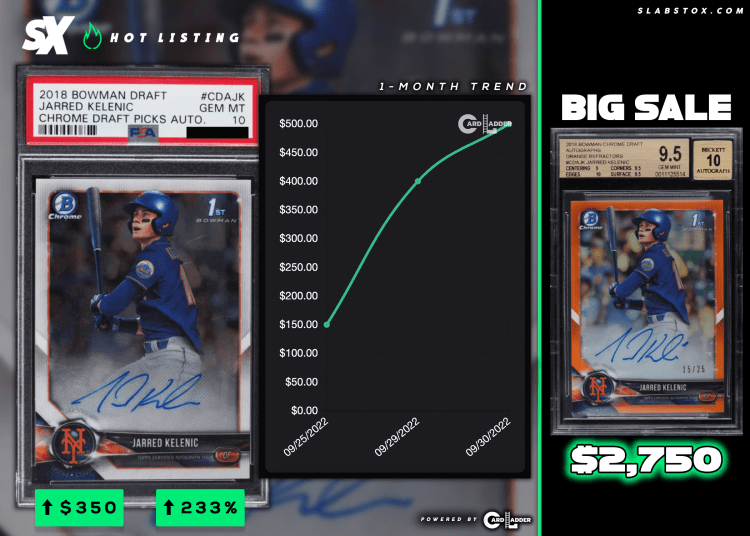 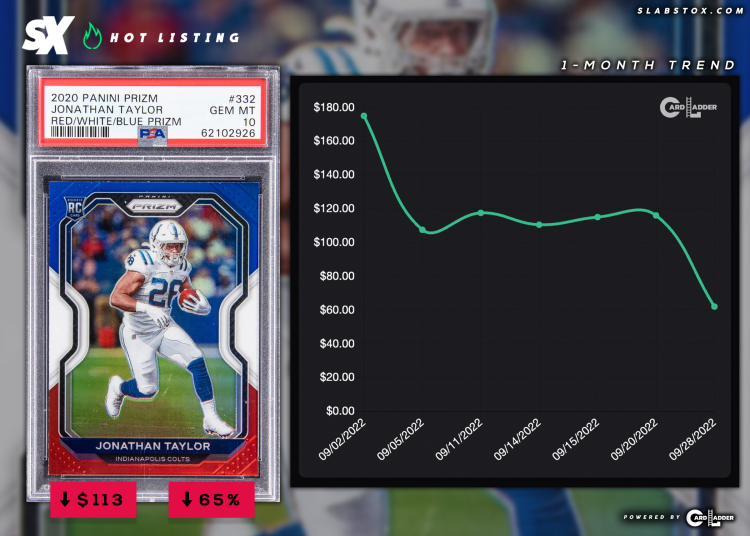 Outside of beating the Chiefs, the Colts have been rather underwhelming. Along with that, so has Jonathan Taylor, and it’s leaving fantasy owners and collectors wondering what the problem is. He’s rushed for 328 yards and just one TD. While those numbers exceeded last season through Week 4 (274 yards and one TD), the expectations were far higher to start this season.

October 7 and October 19. Those are two days to circle on your calendar as the NHL (7) and NBA (19) seasons get underway. There has been some positive movement in each market, but it always is player and card dependent, especially in a down market like we’re in right now. If you’re looking to participate in each market, be sure to tune into the games each night, as at the beginning of the season, hot players sell better than throughout the rest of the season. We’ll see you in the next month’s market report to break down the biggest movement!

Sports Card Shows Worth Checking Out

Many product releases have been delayed by manufacturers due to supply chain issues. The release dates below are subject to change by the manufacturer. Dates provided by Cardboard Connection.

2022 National Treasures Road to the World Cup (moved from Sept.)

Would you like for us to touch on something in a future SlabStox card market report? Hit us up on Instagram @SlabStox and let us know!