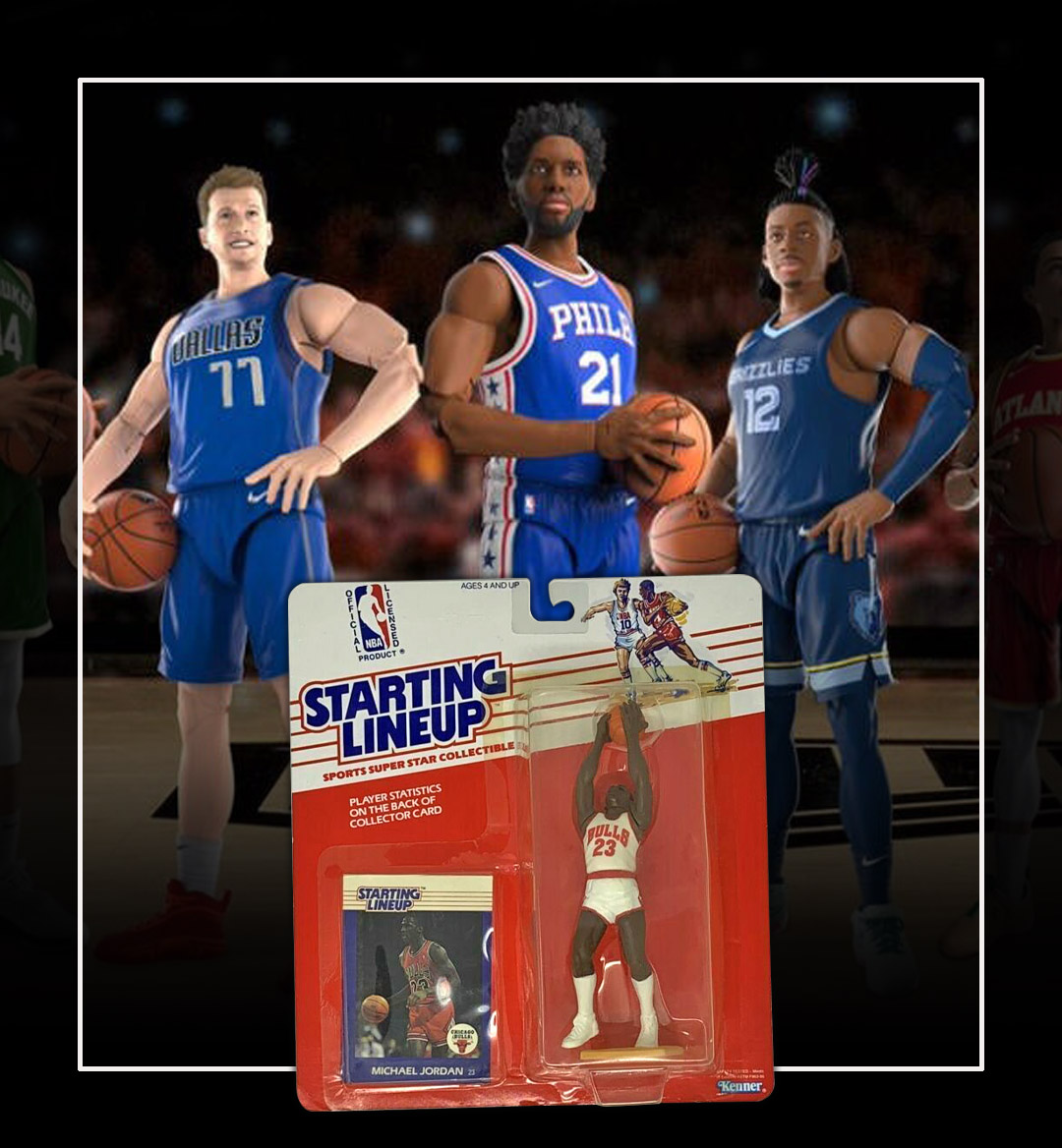 You may have heard that after a 21-year hiatus, Fanatics has partnered with Hasbro and Panini to bring Starting Lineups back, with upgrades for the modern era that include NFT trading cards. We will dive in to that later in the article.

If you grew up in the 80’s or 90’s, Starting Lineups figures are nothing new to you. In the days before NBA2k and twitter, having a mini-figure of your favorite NBA player was one of the furthest extents that fandom went.

The History of Starting Lineups 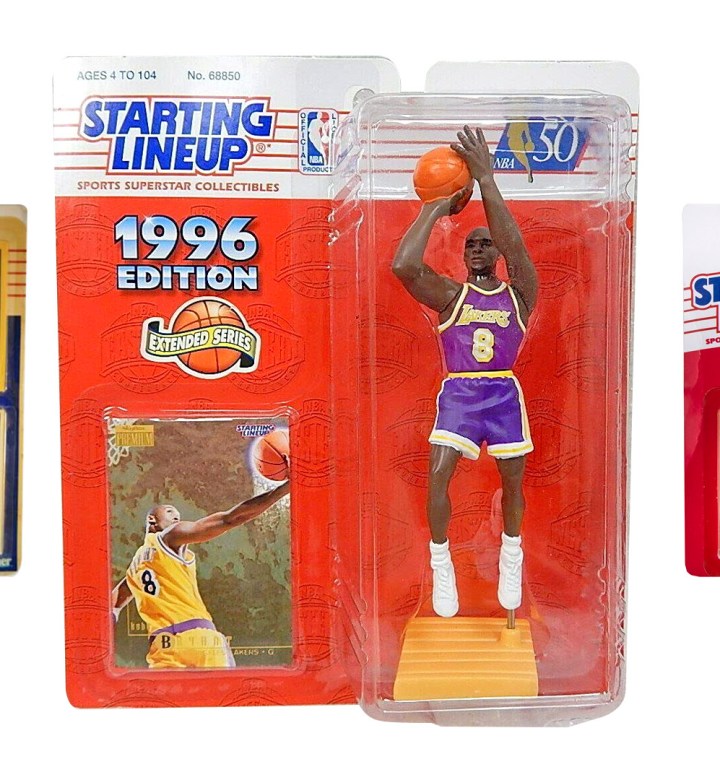 Starting Lineup action figures were actually conceived by former NFL wide receiver John McInally, who was known for his savvy intinution. He was the only player to ever get a perfect score on the Wonderlic test, an aptitude test all NFL prospects are given. In a toy store, McInally noticed all the G.I. Joe action figures, but none of famous athletes. His vision of famous athletes on toy shelves became a reality in 1986, the last year he’d play professional football.

These figures also wisely included a trading card in the box, as the late 1980's was in the midst of an explosive boom in that hobby. The combination of a toy and a card made for a perfect pairing, and they flew off the shelves.

In 1989, Starting Lineup released their NBA Slam Dunk Series, which featured NBA legends such as Michael Jordan or Larry Bird. What was special about these action figures is that they were more like figurines. Each player would be shown dunking on an NBA hoop, even with the hardwood beneath their feet.

By the early 1990’s it looked as though Starting Lineup had issued and sold an action figure of every significant sports star. With a lack of innovation, people began to lose interest in the collectibles. Today, some of the Starting Lineup figurines that have a low population count are heavily sought after by collectors.

Since Legacy One Inc. acquired the trademark for Starting Lineup in 2017, physical Starting Lineup action figures have generally been exclusive to sporting event giveaways, I.E if you are one of the first 5,000 people in the stadium you get an action figure of the team's best player.

Because most kids decided to rip them out of the box and play with them–or display them on their shelves–some of the figures in the original packaging can be worth quite a bit of money. Even highly-graded examples of just the cards that came in the boxes have also sold for some big numbers.

For now, to illustrate how collectible just the cards have become, check out this list of the top 10 Starting Lineup card sales: 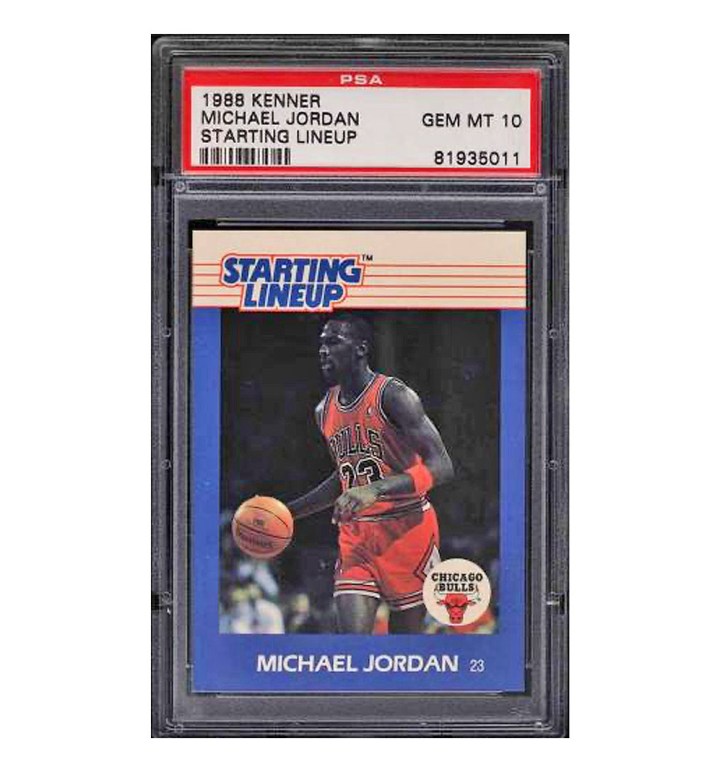 To kick off this list, we have a card from one of the most collected Starting Lineups ever.

The 1988 Kenner Michael Jordan card is his first with the brand, and it features a young MJ gearing up to make a play in transition.  The accompanying figure has His Airness donning the iconic white Bulls uniform.  However, the card brings in a pretty penny when graded well; check out this PSA 10 copy that sold for over $15,000 in 2021. 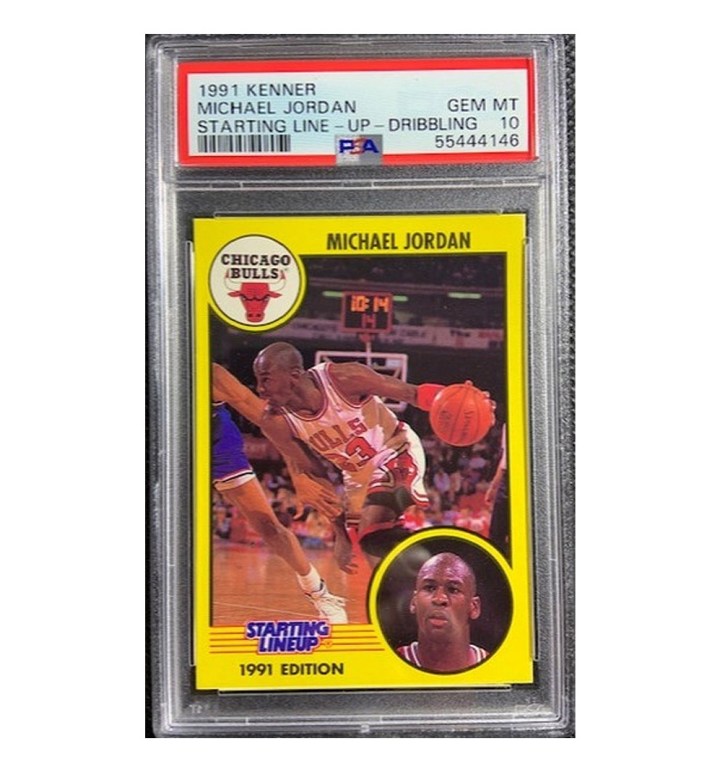 Our next Starting Lineup card is a rare variation from 1991’s Michael Jordan figure.  This POP 5, yellow-bordered card shows another action shot of Jordan driving to the basket.  The “dribbling” variation, as it is called, has sold for up to $9,300.  It remains one of the rarest MJ Starting Lineup cards to date.

Next, we have Jordan’s second-year Starting Lineup card.  This stunner shows MJ doing a solid impression of the NBA logo.  The card was a part of the “One on One” set, and it came with two figures: Jordan and longtime rival Isiah Thomas.  This PSA 10 copy shown above sold for $7,250 last year, and it’s unlikely that we will see another gem mint copy for sale anytime soon. 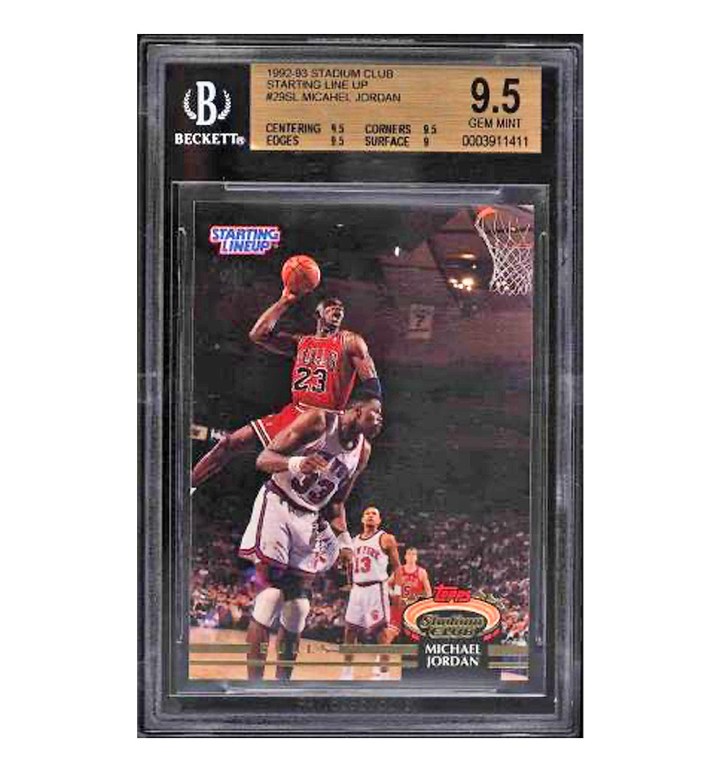 This card is the first on the list to collaborate with another popular set, Stadium Club.  MJ’s 1992 Stadium Club card is one of his most iconic poses;  we get a glimpse of His Airness as he attempts to posterize Patrick Ewing.  The card is also an extremely tough grade, which may be why a BGS 9.5 copy has sold for as high as $5,925. 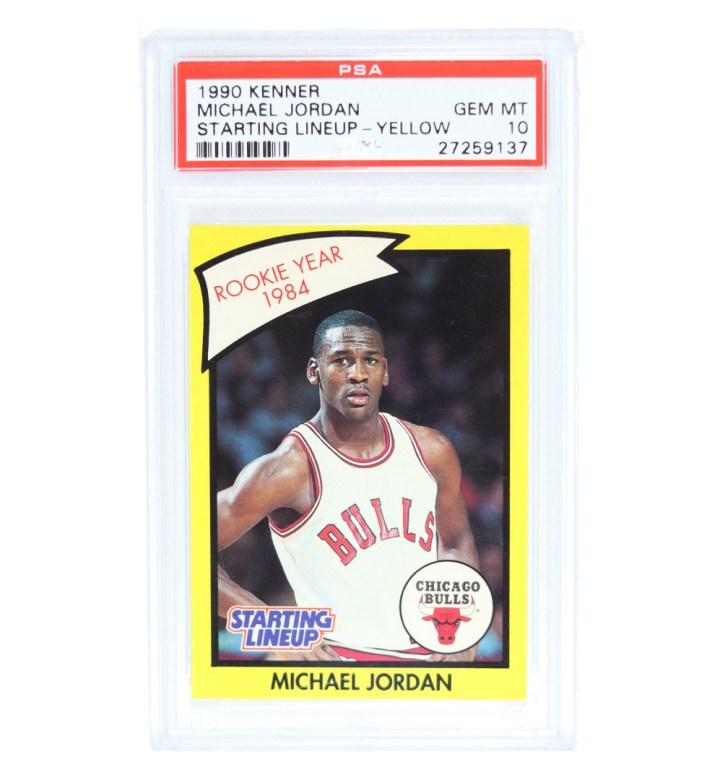 Number five on the list is one of two cards used in the 1990 Starting Lineup.  This one, bordered in bright yellow, features a shot of Jordan during his rookie campaign.  Then a 21-year-old, Mike would go on to win Rookie of the Year for the 1984-85 season.  While the card may not have been produced during that inaugural year, it is still very rare and tough to grade. It sold for $3,330 in March of 2022. 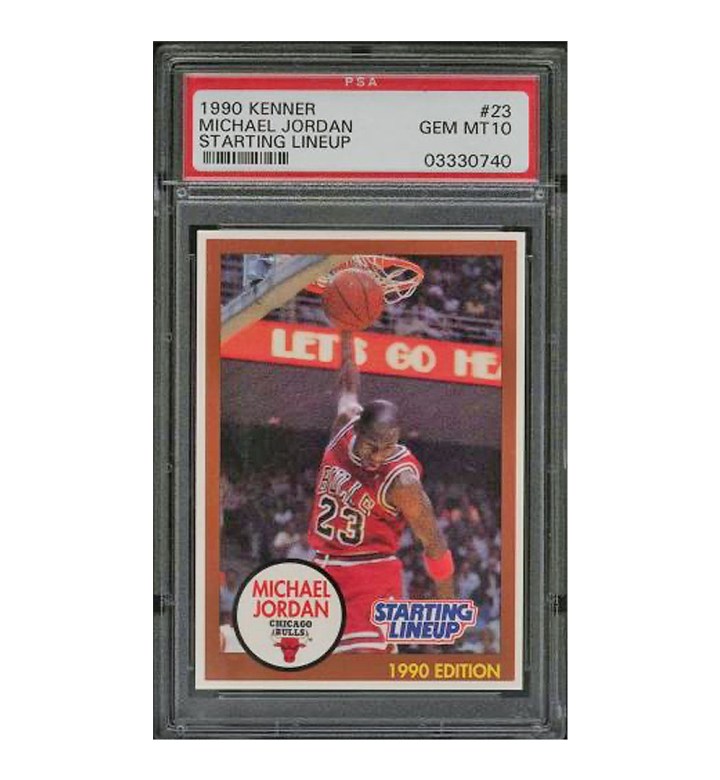 The other card in Jordan’s 1990 Starting Lineup showcased his acrobatic skills around the rim.  It is another PSA 10 with a low pop, and it sold for $3,150 in a PWCC auction. While the other card was a callback to MJ’s rookie year, this copy showed 23 as he began his first Finals run.  The Bulls would go on to defeat the Lakers in the following summer, and the rest is history. 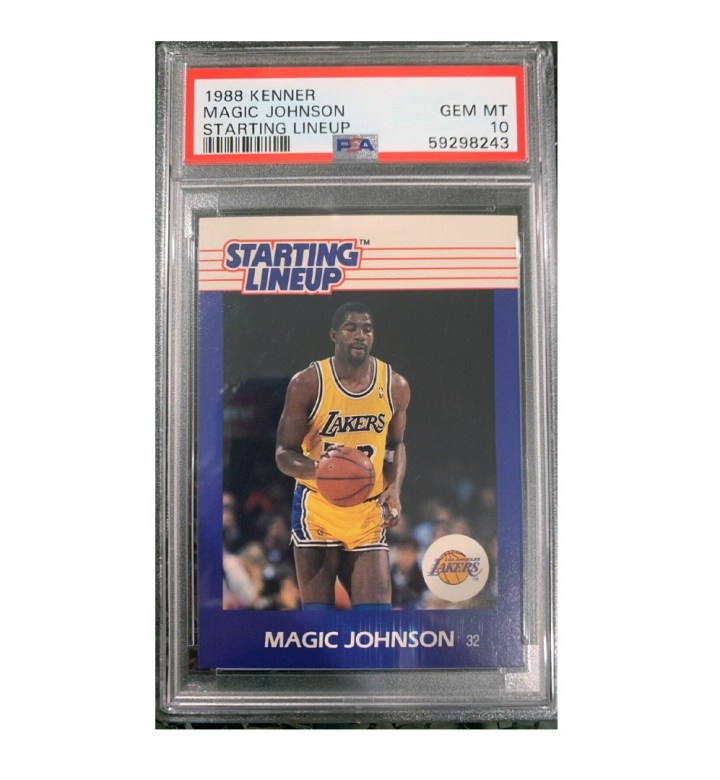 We have reached the first card on this list that doesn’t have Air Jordan on it.  Magic Johnson’s first Starting Lineup also rolled out in 1988, which makes this rare PSA 10 copy a hot commodity.  The series was released when Magic and Bird were still the faces of the league, and both were battling it out almost every year for a championship.  This card sold for $2,200 this year, and it still serves as a remnant of the “showtime” era of basketball. 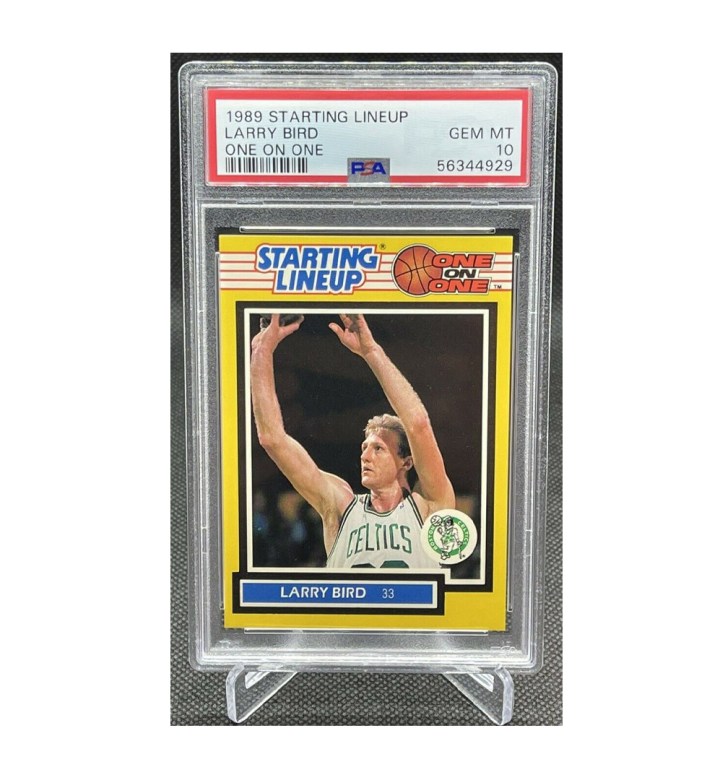 At number eight, we have our first card of Celtics legend Larry Bird.  “The Hick From French Lick” only has a few known Starting Lineups.  His “One on One” set with former foe Magic Johnson is arguably the most popular.  The supplemental card shown above sold for $2,150 back in July, and it currently stands as a POP 14 as a PSA 10. 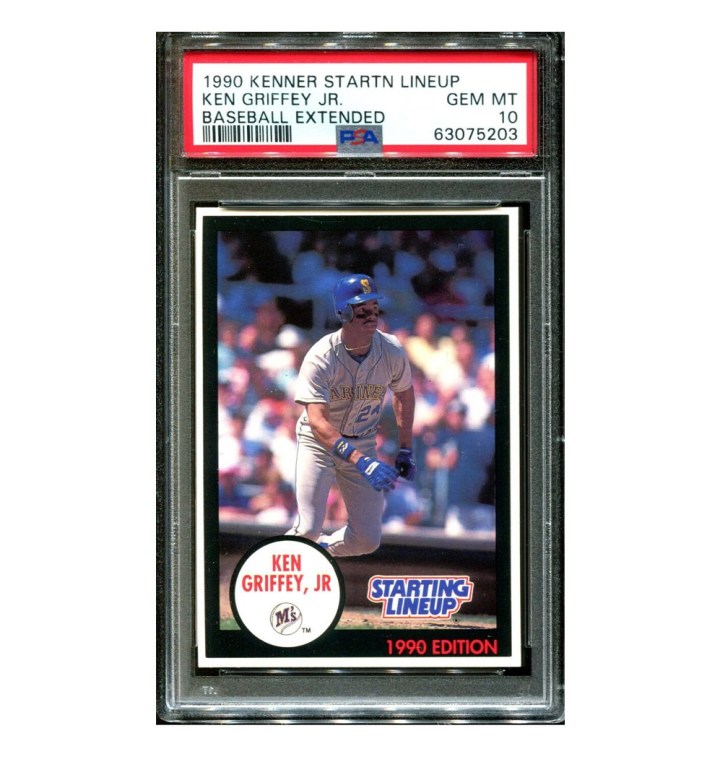 This is the only baseball card on the list, yet it makes so much sense to see Griffey up here with names like Jordan, Magic, and Bird.  Junior’s collectible market is well documented, which explains why this POP 1 PSA 10 sold for $1,670 last December.  The corners and edges of these cards are hard to find in such pristine condition, so seeing this copy with a 10 beside it is astounding. 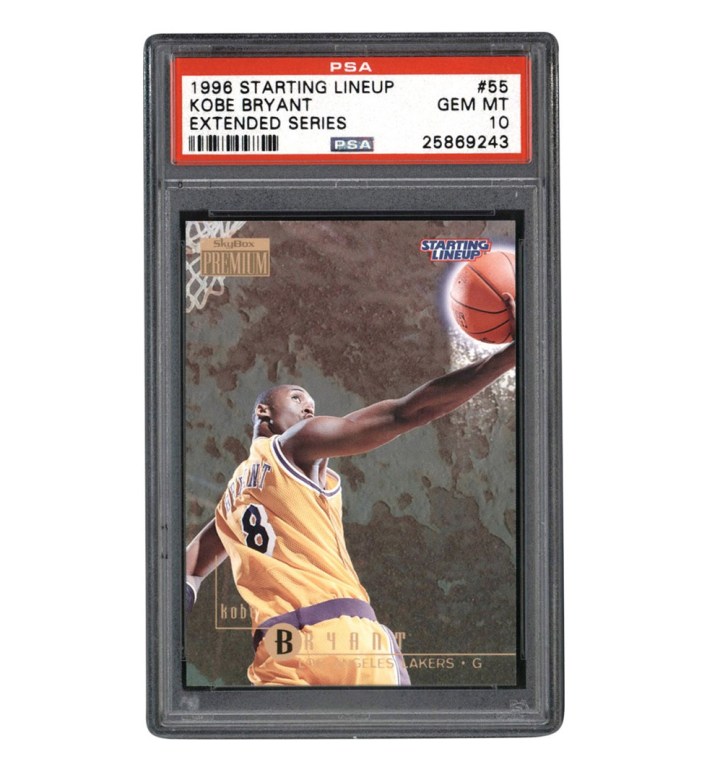 Our last spot on the list is the only one to feature the Black Mamba.  Although Bryant’s action figures may not have been as prevalent as Jordan’s, they are still must-haves for Kobe collectors.  This 1996 Skybox Premium rookie was included in all of his rookie Starting Lineups, and it has sold for as high as $1,560. 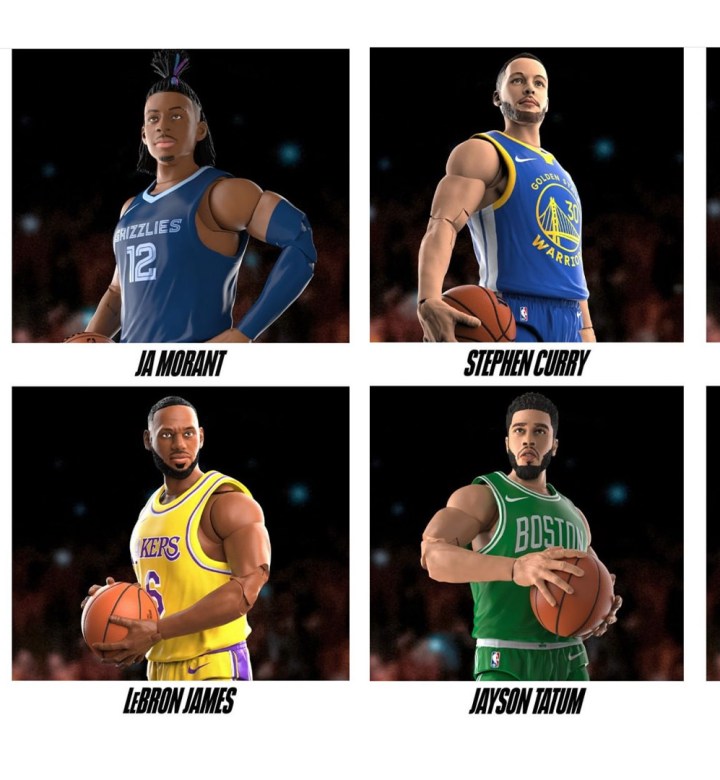 On September 22, Hasbro + Fanatics + Panini partnered to bring the iconic Starting Lineup figures back to market. They were made available for pre-order only on the Fanatics network of websites.

“We’re thrilled to be bringing back one of the most beloved sports collectibles brands of all time, Starting Lineup, and to be teaming up with Fanatics for its highly anticipated return this fall,” Eric Nyman, President and COO of Hasbro, said in the release. “The fast-growing sports collectibles category presents great opportunities to connect with fans of all ages, and we’ve got many exciting announcements to come from the brand in the months ahead.”

Eight of the NBA's top players were featured in this launch including:

Gone are the more simple figure designs of the past. These new figures have a futuristic and sleek look, with improved packaging and extremely realistic details–all the way down to each players branded sneakers. For example, LeBron's figure sports his LeBron 19 Low Nikes.

Also included in the packaging are additional accessories including two pairs of additional hands and a flight stand with base that has the modernized Starting Lineup logo on it.

There will also be a physical exclusive Panini trading card in the box, while consumers will also receive a link via email for digital NFT trading cards–a feature we will get in to greater depth later in the article.

According to Fanatics, these will be shipped to consumers on or around December 1st, 2022.

So It Comes With an NFT?! 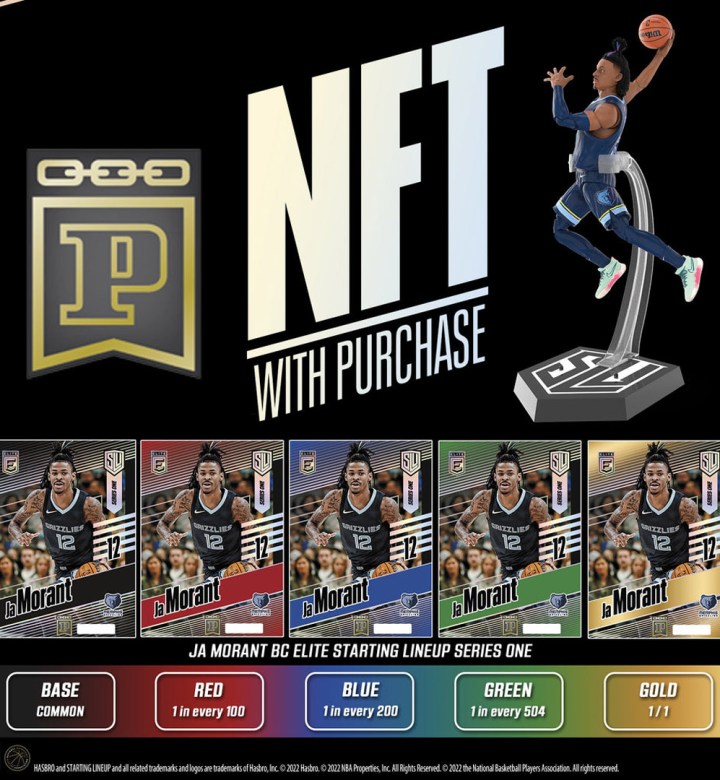 Panini recently made the decision to expand to the blockchain in 2022. The company says it did so to carry forward the legacy of Panini Collectibles into the digital era, as well as give users the highest degree of legitimacy for the digital collectible they own.

As previously mentioned, these new Starting Lineup figures will be accompanied by a physical and digital trading card. Each NFT trading card will be sent to buyers via email link. These digital collectibles will contain different rarity levels. Most will receive a common base card, but they might also get a rarer edition.

It will be interesting to see how much these cards sell for on the open market, and if the gold parallels top the prices of some of the older Michael Jordan cards we previously highlighted.

The digital Starting Lineup NFT trading card offer is valid on purchases from September 22, 2022 through 11:59PM EST on April 30, 2023 (or while supplies last).