"The Gilded Age": Get to Know The Ladies Who Punch 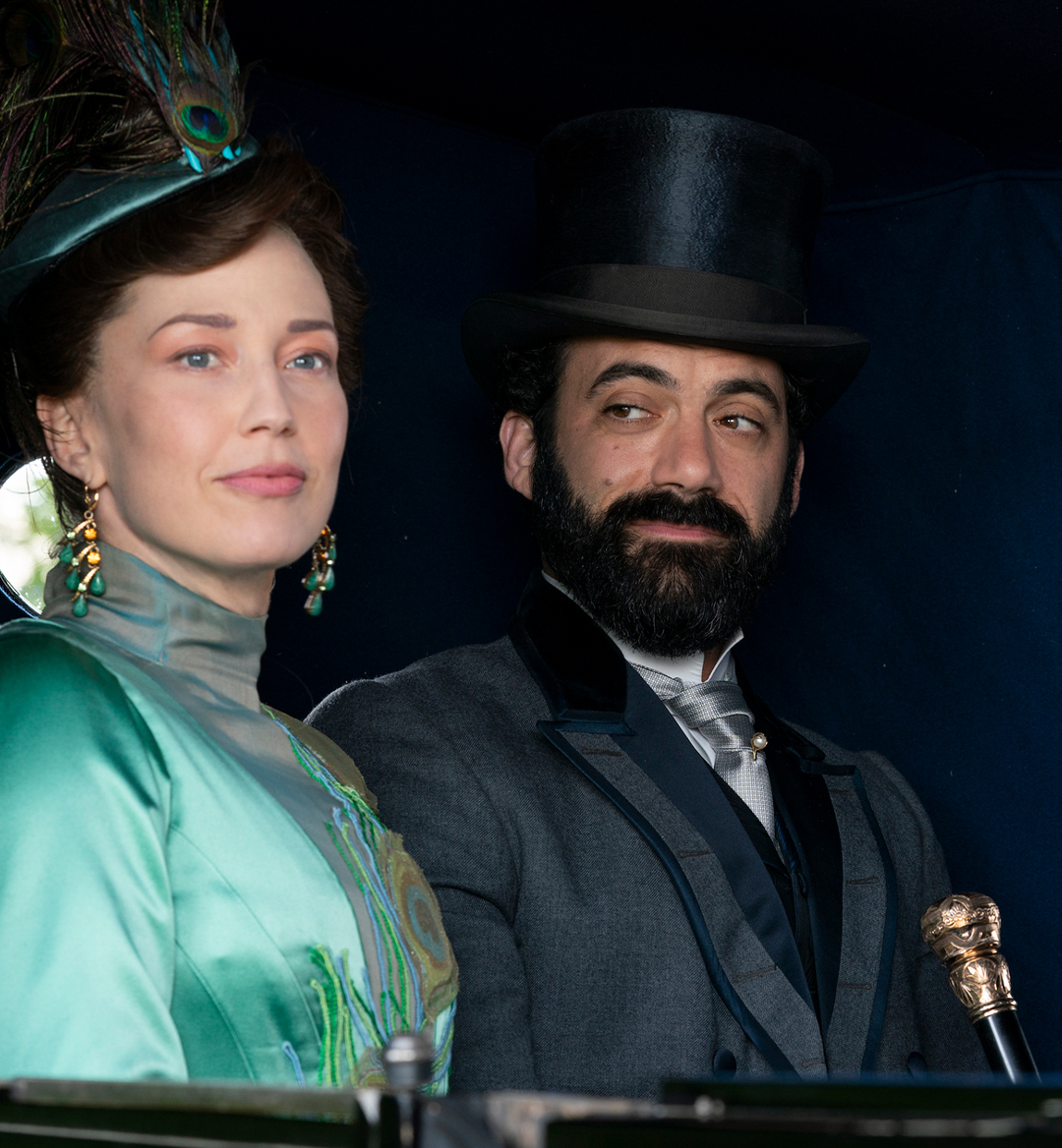 From the outside looking in, it could seem like The Gilded Age is very much a "ladies-who-lunch" type of show. There are women in elaborate outfits being toted around town by horse and carriage. They are dining on the finest of meals while being waited on by men in coats and tails. In many ways, this show is more so "ladies-who-punch" than anything else—but not with their fists, however, as that would be very improper.

Instead, they use selfless charities like The Red Cross to social climb and steal each others' butlers for their own gain. In a city where new inventions are just around the corner and enemies are perched right across the street, it's not always easy to get a full read on the rundown of the day. With one conflict playing into another that's occurring across town, it's important to narrow its theme down in order to understand the full scope of the many plots of The Gilded Age. 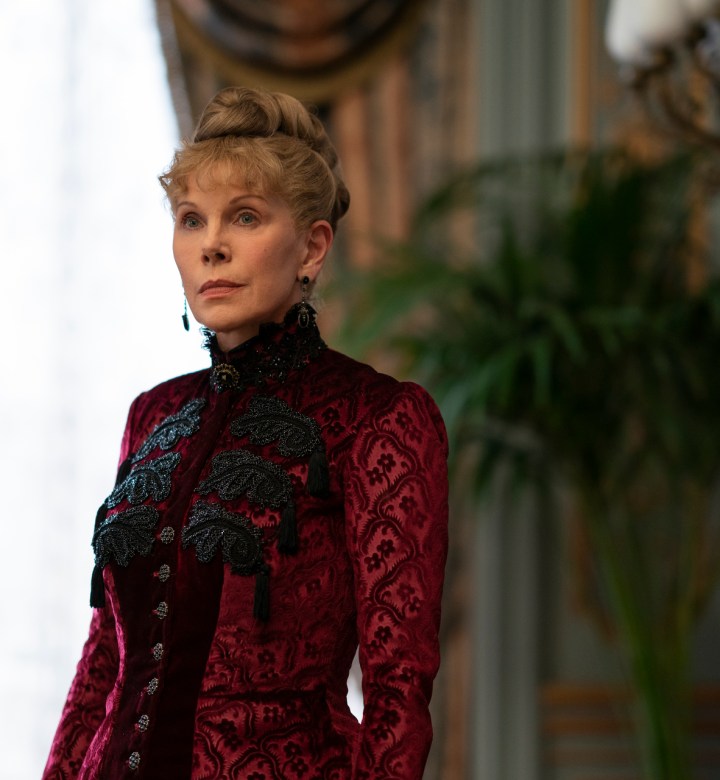 It's one of the oldest wars of all time: the everlasting battle between the new and the old. Things were very much in flux in the late 1800s, creating a race around the track to see who would burst through the finish line first.

The thing is, it's not just as simple as the van Rhijns against the Russells; there's much more that comprises the two houses, including those in the families themselves as well as the staff that operates beneath them.

The way that each house spends its own money goes directly into how they wish to come off as people. For one, the Russells tout their money by dumping much of it into the creation of their mansion, in hiring a French chef to be on duty at all times, and by their actions outside of the house itself. This includes how George Russell (Morgan Spector) willingly bought up the entire merchandise at a charity event simply to make a social statement.

On the other hand, the van Rhijns live in a beautiful, stately home, though it looks like nothing compared to the Russell's bustling estate right across the street. They have a devoted staff who seem genuinely more invested in the family itself than the Russell's staff does, and while they don't have a French chef cooking all their food, their meals are most likely just as well-made.

Where the two houses converge, however, is the way in which they raise their children, though, on the van Rhijn's side, this also applies to Agnes (Christine Baranski) and Ada's (Cynthia Nixon) niece, Marian (Louisa Jacobson). Marian found someone that she loves but that Agnes disapproves of; Mr. Tom Raikes (Thomas Cocquerel) isn't quite up to Agnes' standards, and she believes he will want someone with more money than Marian. Because of this, she practically forbids Marian from seeing him.

In the same way, Bertha Russell (Carrie Coon) is extremely protective over her daughter, Gladys (Taissa Farmiga), making her wait too long to officially come out in her debutante ball. Her father sends other suitors away, paying them off by providing them with lucrative jobs in his industry.

Speaking of jobs, Mr. Russell also doesn't approve of his son's sudden interest in a new career path: architecture. Wanting Larry (Harry Richardson) to continue working for him and eventually take over the company someday, it's going to be tough for him to convince his father otherwise.

Basically, there's no pleasing either of the household heads.

The main thing that separates the two houses is that Agnes doesn't care about Bertha's attempts to one-up her and those around her. Because Agnes is part of the old money crew, she doesn't need to one-up anyone—she's already above Bertha. However, as she watches Bertha climb further and further up the ladder, the air up there is starting to feel a bit suffocating to Agnes.

The Role of Charity 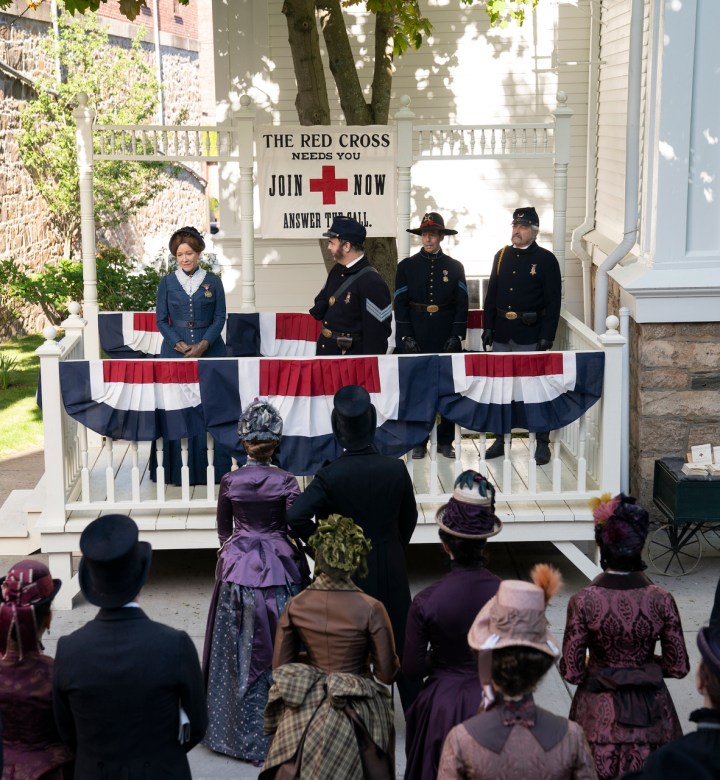 If you looked up "charity" in a dictionary from the late 1800s, you might just find a photo of various women climbing up ladders. That is to say, regardless of the pure intentions behind charity, it's really just used as a tool for social climbing in this time period.

Good ole Clara Barton (Linda Emond) is simply trying to do something good for the world with The Red Cross, yet Bertha, Aurora Fane (Kelli O'Hara), and many others see it as the perfect opportunity to hoist themselves up even further into the glittering eyes of society. Though Barton recognizes their true intentions behind wanting to be involved, she admits to just being happy that they're willing to donate their time and money to her.

At the same time, the charity also has a funny way of showing people's true personalities, which most notably came into the open with regard to Fane, whose glances and mutterings about Peggy Scott's (Denée Benton) presence were not lost on Barton. She subtly made the point that racism had no place in her charity, as she constantly applauded Scott for her continued writings about The Red Cross in the New York Globe.

As a whole, the Russells certainly have made their mark on the charity industry, especially at the event that occurred in the second episode of the season. Beyond upset about how Aurora refused to host a charity event at her new home, she arrived at the event alongside her husband, who proceeded to buy the stock of every stall at the event, as they were selling handmade goods for the proceeds to be donated. In one fell swoop, the Russells solidified their spot on the social scene. 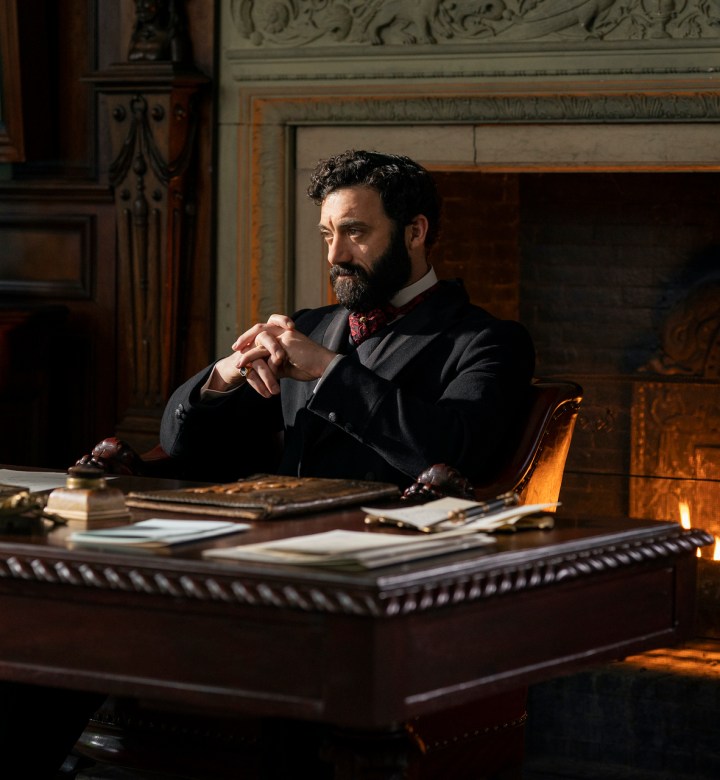 Inventions and expanding upon those very inventions are at the heart of the industry boom in this time period. Run by robber barons like George Russell, we have to remember that very few people saw the same sort of success that he did during this era—and even with that, he's still hitting some fairly rough bumps along the way.

Leading a new train empire, Russell put everything on the line for his company, and many others followed suit. While the exploding transportation industry represented a promising era of new growth, it was also teetering the line of acceptable risk and losing everything.

And in fact, that's just what ended up happening with quite a few of Russell's colleagues after retreating on their promises to push for his new train line within the political sphere. As Russell bought up the remainder of his company's shares that he had lost, his colleagues' net worths plummeted, with many of them becoming bankrupt as a result of it, forcing them to beg him for mercy.

Following this, one of his colleagues—Mr. Morris—ended up killing himself as he exhausted his funds and was left with nothing. In a way, things were later flipped on Russell as one of his trains crashed, killing quite a few people because of older and faulty parts. Facing possible legal action, Russell sees firsthand the dark side of the coin; as he sits atop his proverbial throne in his glittering new home, he's far removed from the nitty-gritty of what's actually going on. Had he been down in the dirt with the rest of them, perhaps this tragedy could've been avoided.