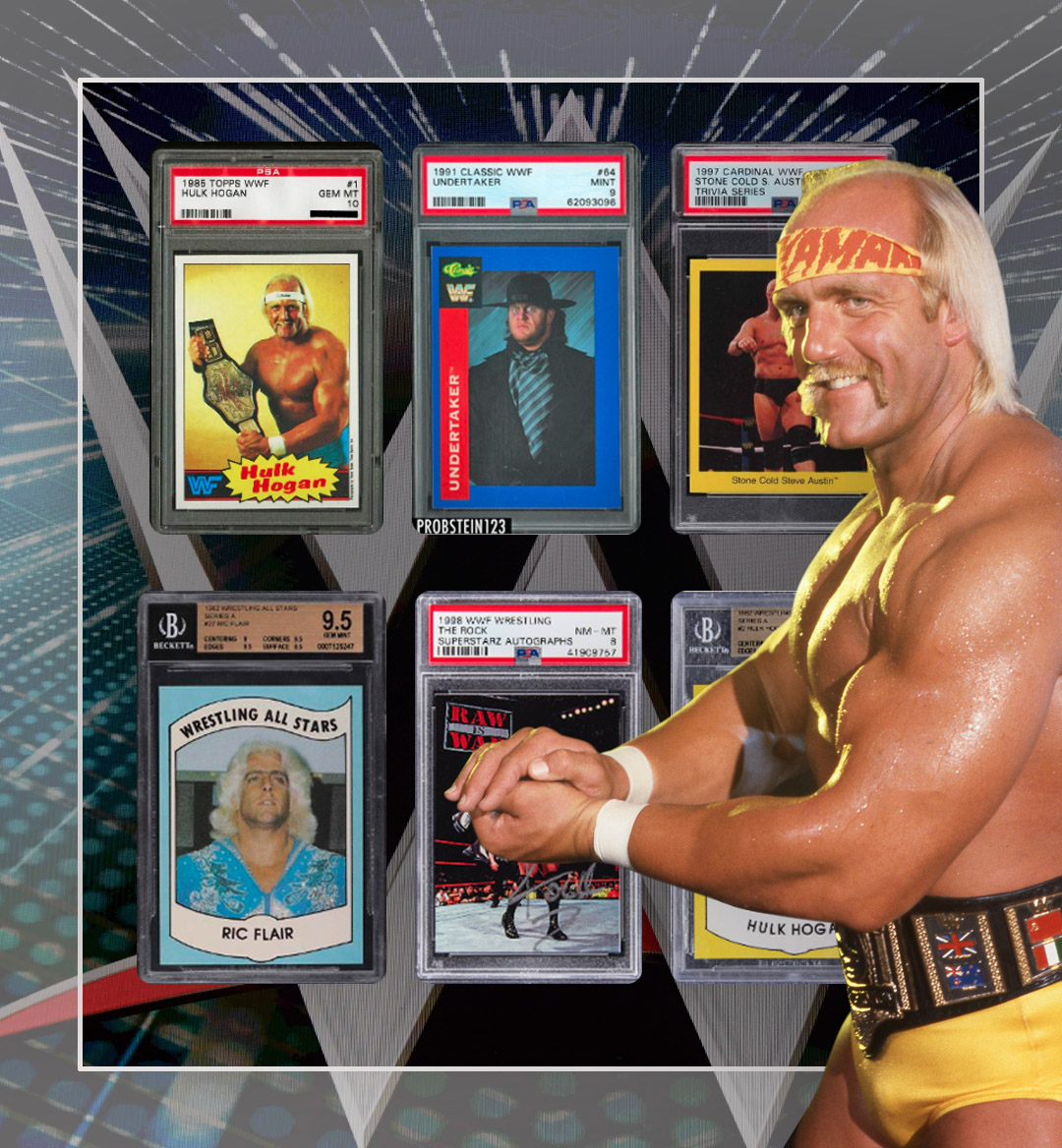 Before I jump in to the list of the top WWE trading cards to look out for, let's get you up to date on the state of the wrestling card market. The 2022 release of WWE Prizm has put a spotlight back on wrestling trading cards.  The iconic stars of the 90s and 2000s have been rebranded into the ever-sought-after Prizm set. This has ushered in both a layer of nostalgia and a desire to hunt the jaw-dropping Gold and Black Prizms, which consistently bring in a pretty penny across all sports.

However, Prizm isn’t the wrestling world’s first grand entrance into the hobby.  Legends like Ric Flair, Andre the Giant, and Hulk Hogan all have rookie cards stemming back to the early 1980s.  The following list highlights a few of the most revered sets for WWE collectors:

There are other noteworthy sets to acknowledge as well, but the aforementioned list offers rookie cards for the game’s most heralded superstars.  Diehard fans of the WWE/WWF have been accumulating these cards for decades now, and now the average cardboard collector is catching on.  CardLadder has reported a 34.7% increase in its wrestling index over the past 90 days.  This comes at a time when many other major sports have been on a downhill slope, so it is exciting to see big sales across the WWE market.

Today, we intend to feature 10 cards in the WWE world that are worthy of a second (or third) glance.  Some may have fetched a high price at auction, while others may be up for grabs as you are reading this article.

Without further ado, here are the top WWE trading cards to look out for: 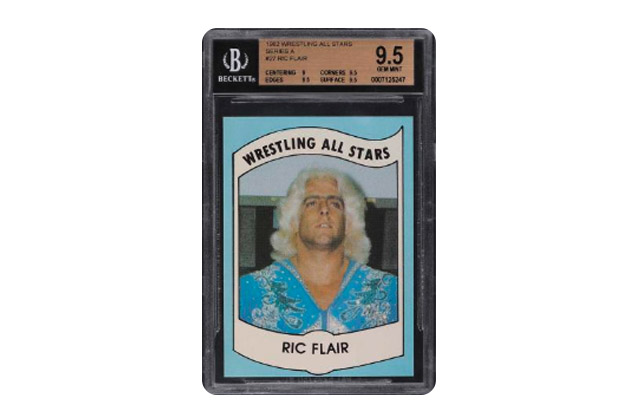 If you’re a Rolex-wearing, diamond ring-wearing, wheeling-dealing, limousine-riding, jet-flying son of a gun, then this card is for you.

One of wrestling’s biggest personalities, the Nature Boy rose to prominence in the late 70s fighting in the National Wrestling Alliance and later in the WCW.  Flair has since maintained relevance by appearing in many WWE events over the last 2 decades. His trademark slogan, “WOO!”, has become synonymous with American pop culture, and his flashy attire is certainly hard to forget.

The card pictured above brought nearly $9,500 at auction in April, but lower grades can be picked up for far less. This is also Ric Flair’s first appearance on cardboard, which cements it as his true rookie card. Other copies of the 1982 Wrestling All Stars Flair can be purchased here or at major auction houses. 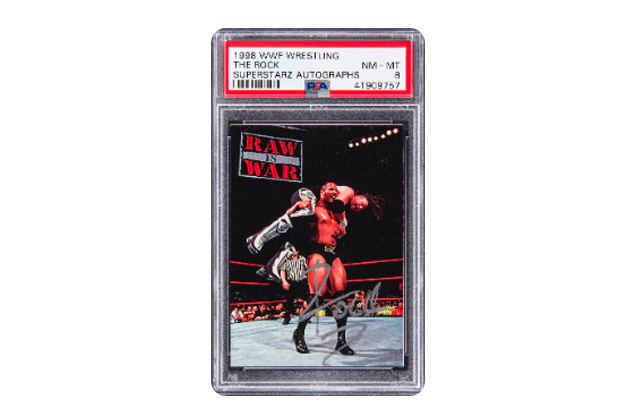 Arguably the most popular man on Earth, Dwayne “The Rock” Johnson has reached a celebrity status that surpasses any other wrestler on this list.  Therefore, it is only fitting that we showcase one of his more electric appearances on a card.

The 1998 Superstarz Autographs feature phenomenal photography work that transports the viewer back to the late 90s, a time when wrestling reached peak ratings.  This is also the first autograph set for The People’s Champ, and it has proven to be a tough set to grade.  There are currently only 33 PSA-graded copies and only 1 PSA 10 to date. 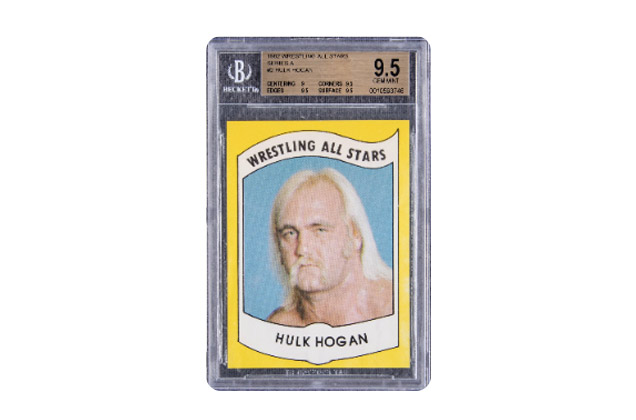 Another rookie card for a legend, this 1982 Wrestling All-Stars copy features a yellow border and a young Hogan with a sad demeanor. While he has had his fair share of controversy, Hogan has remained one of the most prominent names in the sport for 5 decades.

The Beckett 9.5 shown above fetched an auction price of nearly $48,000 in 2021.  There are no PSA 10s, so this may just be the best Hulk Hogan card to ever exist (Oh Brother!).  Nevertheless, lower grades can be picked up at a more affordable rate on eBay and other trading platforms. 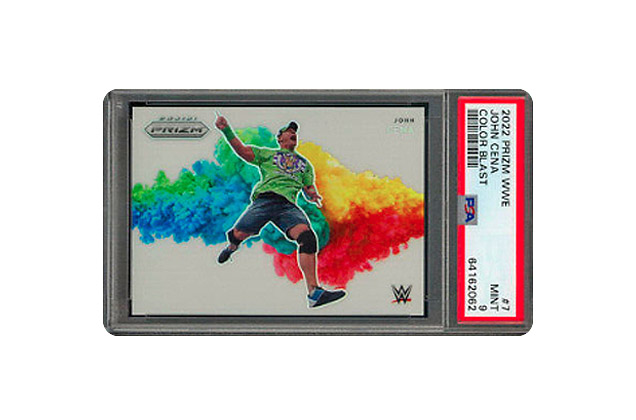 We aren’t sure how a card without anybody on it sold for so much, but here we are.  Jokes aside, Cena has transformed himself from WWE Champion to A-list celebrity in a few short years, even playing the titular character in HBO Max’s Peacemaker.

This card featuring the wrestler/actor/rapper/mogul is our first item from the 2022 Prizm set, which has been one of the hobby’s hottest releases of the year.  The Color Blast is a short-print card that only appears once in every case (12 boxes).  It sold ungraded for $7,500 when the product debuted, but it has since cooled down to the $1,500-$2,000 range.

There are only 3 Color Blasts currently available on eBay, including a BGS 10 copy.  This card accentuates everything remarkable about Prizm, so it will be interesting to see where it goes in the future. 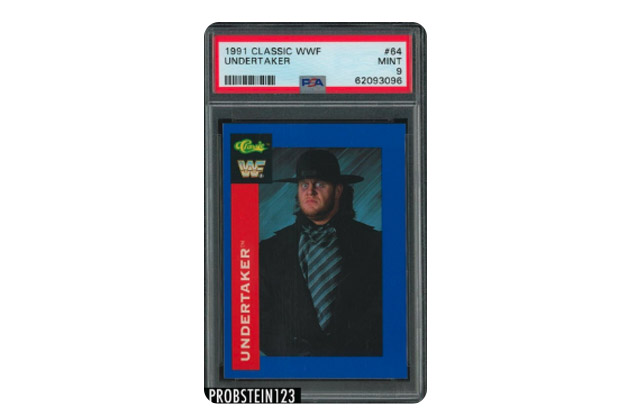 Another early WWF card of a GOAT,  this card is a diamond in the rough of the junk wax era.  Undertaker has reached almost mythical status in the WWE, all while accumulating a fandom across generations.

Copies are available at a favorable price, but higher-graded copies have reached new heights in the past year.  An SGC 10 recently closed at $3,000, marking the most expensive card to come out of the 1991 Classic set. 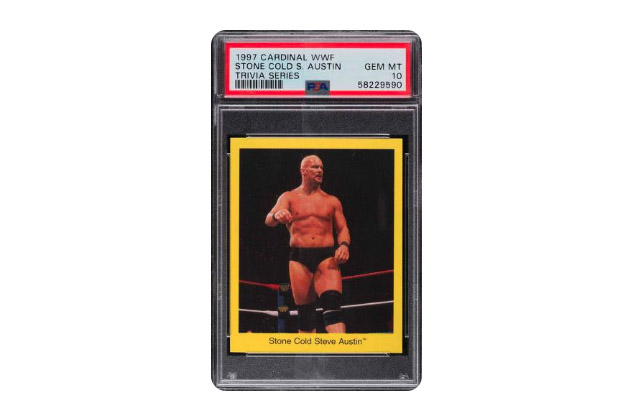 There may be more impressive “Stone Cold” cards out in the wild, but sometimes simplicity is key. The beer-drinking brawler is sure to be found on most fans’ Top 10 list, and he reached an unprecedented level of fame in the late 90s.

Austin has cards dating back to 1991, but many still consider this his most recognizable rookie card.  The Cardinal series’ crisp yellow border almost looks like a Polaroid from the golden age of the WWF.  And who better to show on this Polaroid than Stone Cold?

Different graded copies can be found here, and most of the PSA 8s and 9s have remained relatively inexpensive despite the resurgence from the Prizm release. 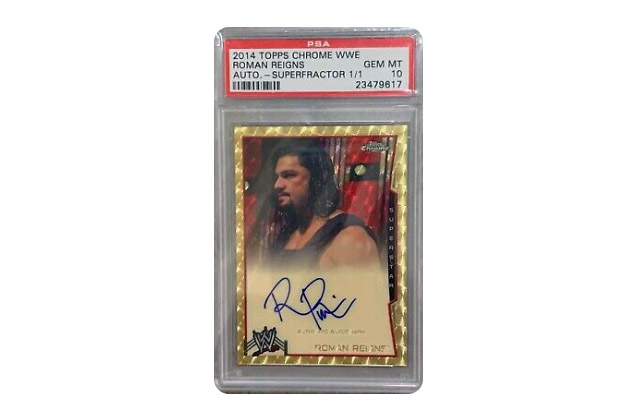 This is undoubtedly the best card of the dual champ.  The 36-year-old has accumulated a following comparable to the other legendary stars on this list.  He also rose to such an esteemed status at a time when Topps had sole control of the WWE market, so we saw a new influx of the popular Superfractor 1/1s.

This card sold for $15k in February, and there aren’t other copies you can pick up.  Regardless, other superfractors and low-numbered parallels can be found online, and we will be watching to see if this 2014 rookie 1/1 auto resurfaces in the future. 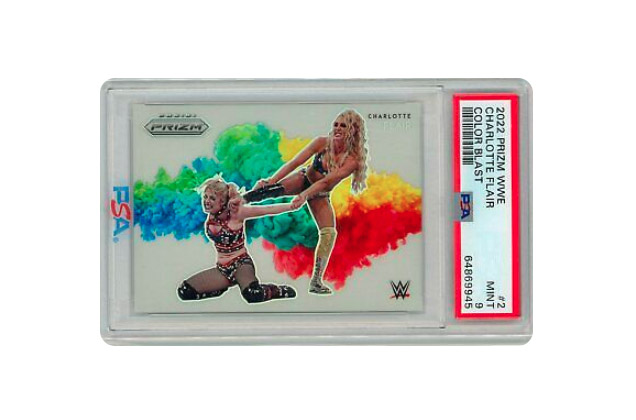 It’s a family business for Charlotte Flair, and her skillset as a fighter mirror that of her father, the Nature Boy.  This card is another case hit from 2022 Prizm, and it has proven to be Flair’s most expensive card in existence.  However, other great female fighters like Sasha Banks have rallied 4-digit prices on eBay, so Charlotte is not the only Color Blast to have on your radar.

Look for Flair’s short print inserts and serial numbered cards here.  New auctions and prices are being realized daily, which is the case for most cards in the 2022 set. 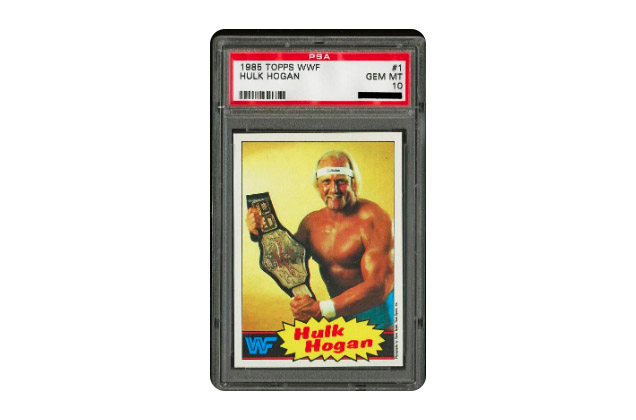 This isn’t Hogan’s true rookie card, but it certainly has more eye appeal.  1985 marked the first year Topps manufactured WWF cards. The first card in the set is none other than Mr. Hogan, smiling and holding the championship belt. This has historically been one of the top WWE trading cards to look out for.

CardLadder has verified a PSA 10 sale of $35,000, which is certainly eye-opening.  But a population of only 14 PSA 10s and an iconic photo manufactured by the most storied card company is the perfect mixture for big-money auctions.  You can shop for various grades here, although there probably won’t be any Gem Mint 10s available anytime soon. 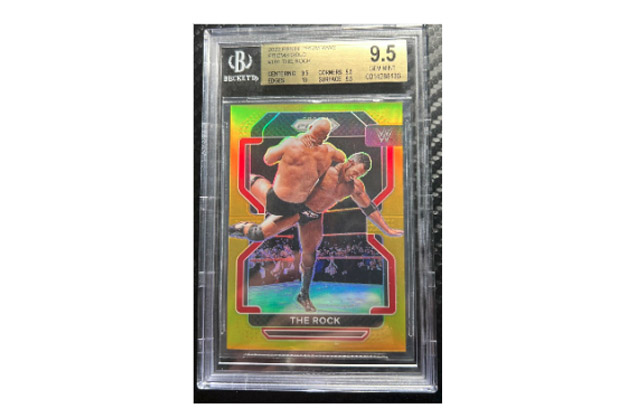 Our final spot includes one of the more stunning cards you will see today.  We mentioned earlier the power that Prizm Golds have in the hobby and their immense desirability.  This card is no different.

Currently the highest-listed Prizm WWE card on eBay at $74,999, we could definitely see this card cook up a high sale price.  Stars like Ultimate Warrior, Undertaker, John Cena,  and Roman Reigns have all had low-numbered Prizm auctions, but there still hasn’t been a verified public sale of the People’s Champ.  Add a Beckett 9.5 grade into the mix and you have a truly spectacular card.

The only card that will exceed the gold’s value is the mythical Black Prizm 1/1, which has not surfaced as of early May. However, when it does, it will most certainly become the one of top WWE trading cards to look out for.

If you are more of an AEW fan, make sure to check out my recent article on the Top AEW Cards to Look Out For!