The Most Valuable AEW Cards of All Time 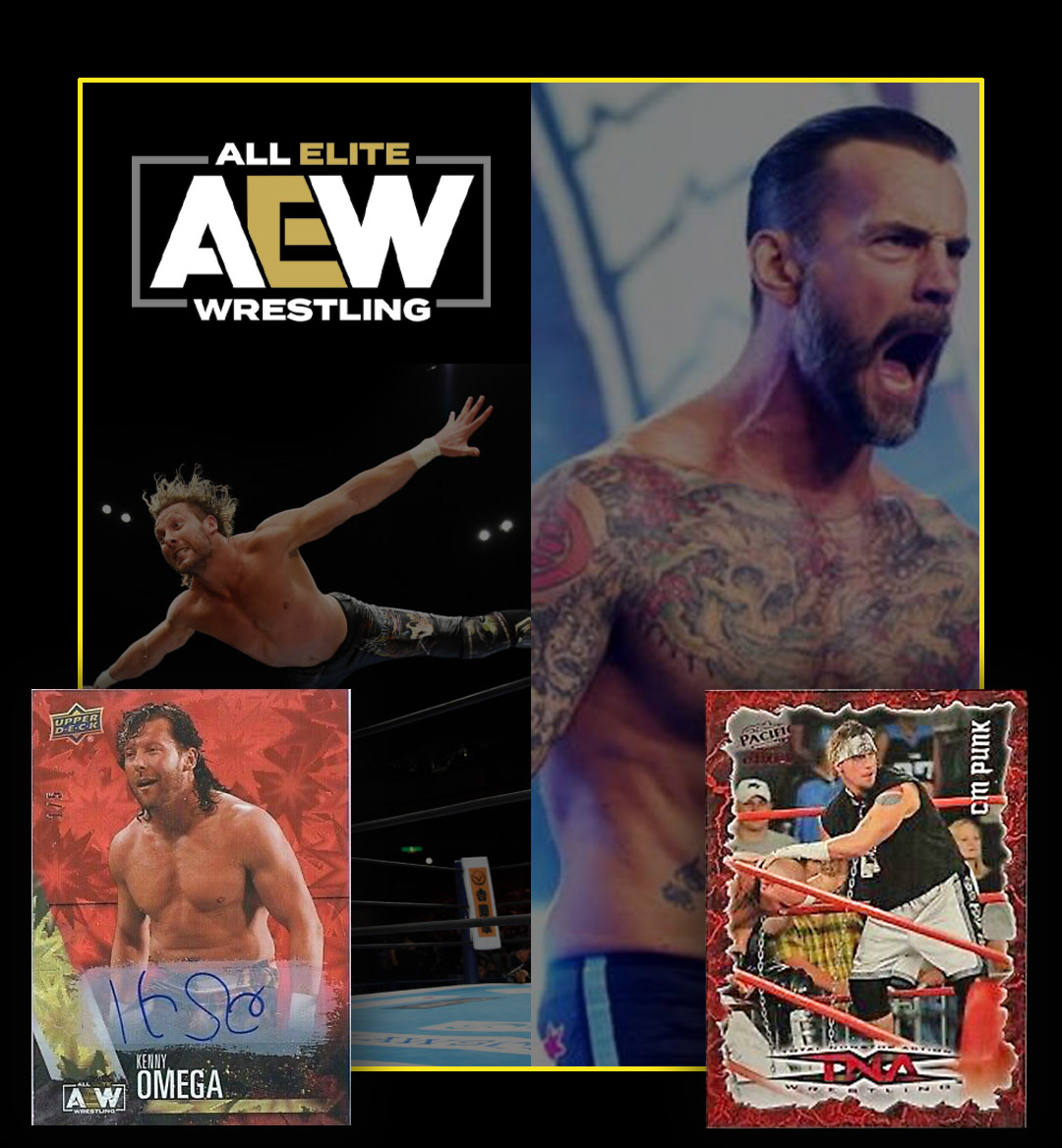 Before we jump in to the list of the ten most valuable AEW cards of all-time, let's dive a bit into how we got here. Upper Deck’s inaugural release of All Elite Wrestling cards has given fans a chance to rip and collect their favorite stars. Founded by Tony Khan in 2019, AEW has already become the second-biggest wrestling promotion group in America. Deals with TBS, Bleacher Report, and an upcoming video game have made the group rapidly popular.

The hobby boxes, which were released in late 2021, have become a bit of a rarity. They are already sold out on bigger hobby sites like Blowout Cards, with no restock currently listed. Today, we aim to highlight some sales of the most valuable AEW cards to come out of the product so far. We will also look at some older sets that feature prominent AEW fighters.

It is still possible to find these boxes on secondary markets like StockX, but they are growing in demand increasinglyHowever, collectors will not have to wait much longer for a new product. 2021 Upper Deck AEW Spectrum, which is slated for a June release, will feature some low-numbered autographs and other high-end relics. These cards will surely produce some big sales in the future, and some may make it onto this list.

For now, let’s finally take a look at the most valuable AEW cards of all time and put a spotlight on some of the best wrestlers in the ring today, and if you are wondering who might be next on this list, check out this article on the next 10 AEW champs! 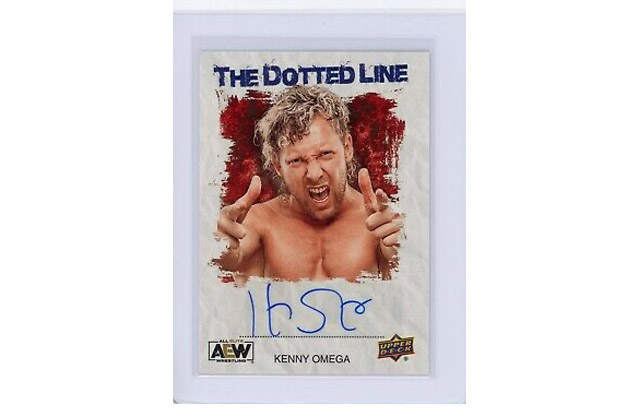 It's no shock that the most valuable AEW card ever sold is “The Best Bout Machine”, one of AEW’s initial talent signings that made the wrestling world take notice. Kenny Omega’s legendary run in New Japan Pro Wrestling cemened his status as the “Best Bout Machine,” which segued right into him having some of the greatest matches of all time in his new home of AEW. His reign as AEW World Champion saw him take his talents to Impact Wrestling and the Mexican wrestling promotion AAA in a bid to make waves as the “Belt Collector.”

This stunner of a card sold for $2,500 back in January, but copies are available for less on eBay currently.  Nonetheless, the rarity and lack of graded cards from this set makes this ink of “The Best Bout Machine” still desirable for collectors. 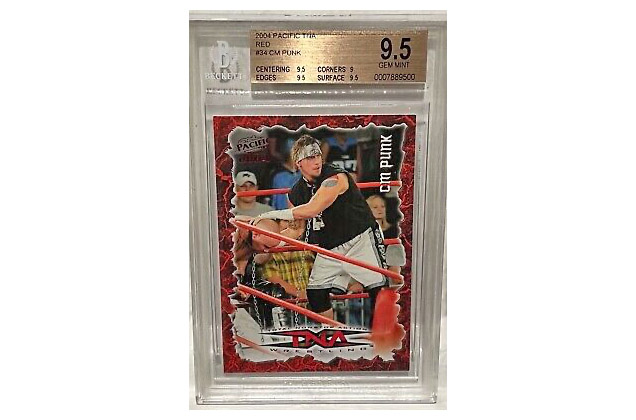 The second most valuable AEW card ever sold is of Chicago’s favorite son, CM Punk. He produced one of the most iconic moments in wrestling history when made his grand return to the sport that popularized him. On August 20, 2021, Punk blew the roof off the United Center as he made his debut for AEW. And since then, he’s shaken off all that ring rust to compete with the new generation of upcoming talent that solidified their names in his absence. Punk has become an AEW mainstay that regularly produces the best matches and promos on a weekly basis.

This bad boy is a tough, tough one to grade.  PSA does not even have a 10 listed in their registry, so it was no surprise that Punk’s first appearance on cardboard was able to fetch such a pretty penny. 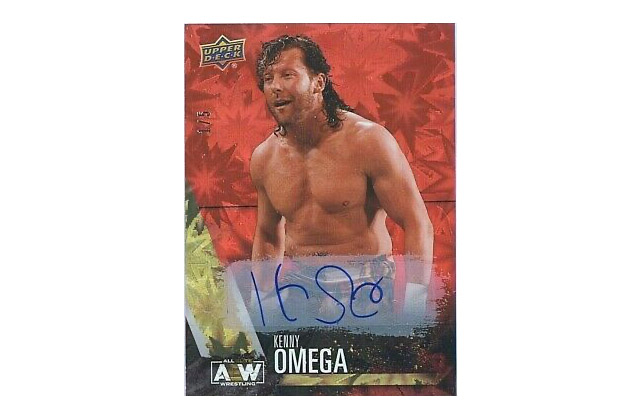 Kenny Omega’s finest in-ring exploits in AEW are many. He had a banger of an Unsanctioned “Lights Out” Match against Jon Moxley at Full Gear 2019, one of the greatest tag team matches of all time at Revolution 2020 alongside Adam Page against The Young Bucks, and a strong AEW World Championship title defense match back at All Out 2021. Omega is widely recognized as AEW’s most reliable in-ring talent when it comes to keeping fans’ attention thanks to his amazing match output.

We really do enjoy Upper Deck’s commitment to make low-numbered sets with this product.  Hitting an autograph numbered to 5 of one of AEW’s biggest names is sure to make someone’s day.  The question remains: would you grade this if you pulled it? 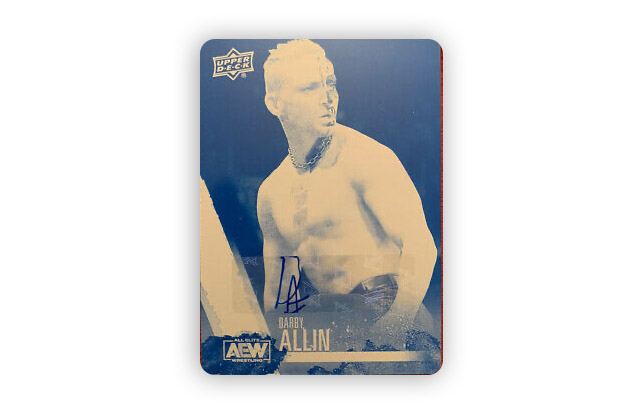 The half-face painted Darby Allin is actually a rebel with a cause. His past struggles have defined him as a mysterious individual that takes the fight to anyone and everyone, no matter the size. His affiliation with wrestling icon Sting has helped him fend off the many individuals that come for his head. And once the bell rings, Darby uses a high risk-based style that puts his body on the line on the regular in order to incapacitate his foes.

It is interesting to see a printing plate autograph make an appearance on our list.  We have seen plates of big stars in other sports sell high at auctions, so it seems like the common denominator here is a sweet signature across the center of the card. 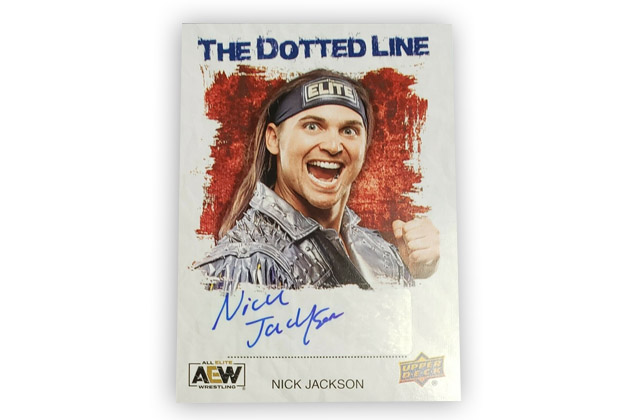 Nick Jackson is one-half of AEW’s most recognizable tag team, The Young Bucks. Besides his quality duo work alongside Matt Jackson, Nick has impressed in his rare singles outings as well. Assorted bouts with Rey Fenix, Bryan Danielson, and Trent Beretta have shown that Nick can also be counted on to give the AEW faithful an awesome singles performance whenever.

‘The Dotted Line’ set from the inaugural production last year is definitely one of the sharper wrestling inserts we’ve seen.  The clean, simple design throws fans back to the NWO auto set of the late 90s, which is still heavily revered years later. 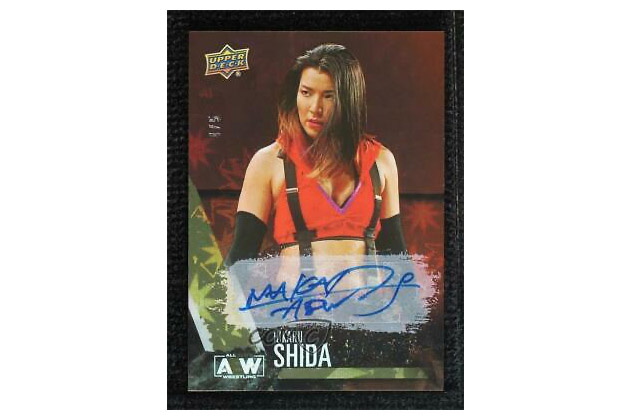 AEW’s women’s division is jam packed with some quality domestic and international talent. One of the top Japanese female wrestlers in the company is Hikaru Shida, a multi-talented woman who can sing and land a devastating Falcon Arrow. Shida claimed the AEW Women's World Championship in 2020 by defeating Nyla Rose and went on to have a strong reign that pitted her against the very best of the AEW women’s roster.

The “Dynamite” parallel definitely sticks out when holding the cards in hand.  And this copy features a meticulous auto from Shida, especially at a time when many athletes shorten their signature to mere initials. 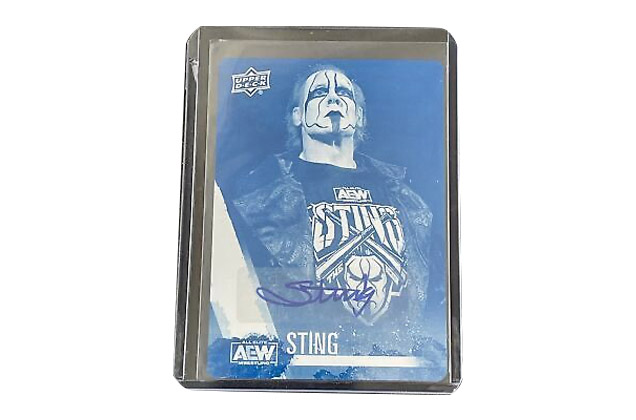 “IT’S STING!” Famed WCW commentator Tony Schiavone’s signature callout for the “Stinger” sounded like the greatest thing ever once it was uttered during Sting’s grand debut for AEW. This monumental event took place at Winter Is Coming (2020), which saw Sting scare off Team Taz and stare down the remaining babyface wrestlers left in the ring. Sting’s AEW tenure has seen him aligned with Darby Allin and look way better than expected in several multi-man matches.

How can it get much better than a 1/1 of a wrestling legend? Well, adding an auto surely doesn’t hurt! Sting has made many appearances on older WWE and NWO sets, but this printing plate currently sits as one of his most expensive cards to date. 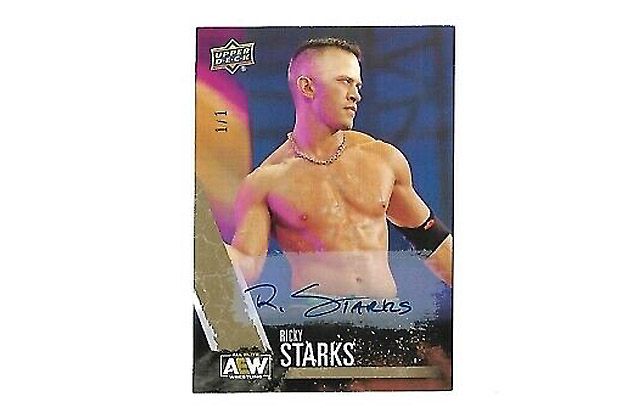 “The revolution will be televised…” “Absolute” Ricky Starks first popped up in AEW to answer Cody Rhodes’ TNT Championsip open challenge series back in 2020. Now Mr. Starks wrestles on behalf of Team Taz as its crowning jewel and FTW Champion. The sky is truly the limit for the “Absolute” one - fans have flocked to him thanks to his cocky demeanor, crowd-popping promo delivery, and flashy in-ring style.

This card is a shining example of the power between printing plates and true 1/1s.  This glimmering gold parallel is Starks’ best card as of now, but it makes us wonder what type of sale a Kenny Omega Gold 1/1 would bring. 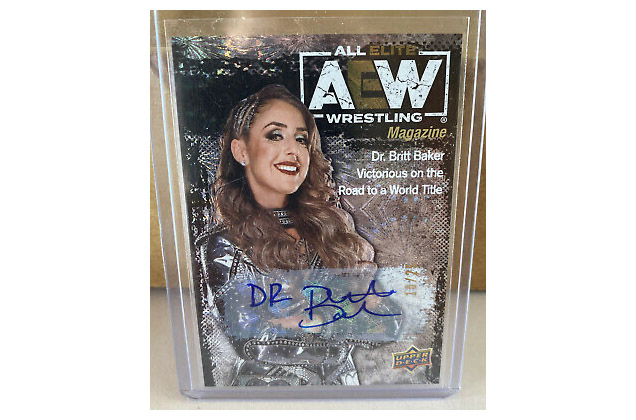 Never forget the DMD! Once Dr. Britt Baker, DMD embraced her heelish ways, she turned heads and morphed into the undisputed queen of AEW. Her welcome switch from generic babyface to effective heel pushed her higher up the women’s division card and eventually resulted in her defeating Hikaru Shida for the AEW Women’s World Championship. The wrestling world’s most talenetd dentist is still a force to be reckoned with nowadays.

Number 9 on the list also features the first appearance from the ‘Magazine’ set, another unique insert from 2021 AEW.  There was also an alleged $8,000 sale from the printing plate of this card, but we were unable to verify its legitimacy.  Regardless, many low-numbered copies are still readily available for collectors on eBay, including the Gold 1/1. 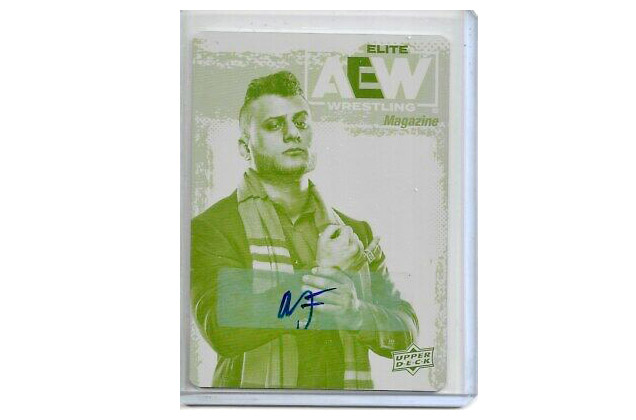 He’s better than you… and you know it. Maxwell Jacob Friedman (aka MJF) has emerged as one of AEW’s “Pillars”. He also notched his place in the company as its biggest heel. The old-school bad guy vibes are so strong with MJF - his constant berating of the audience, dirty in-ring tactics, and disgusting acts against his rivals have made him so easy to despise. MJF’s not only a great promo - he’s also a fine wrestler that can easily back up everything he says beforehand. Make sure you kiss the ring when he comes your way during an AEW show.

The swagger emitting from this card is unrivaled.  This printing plate brought a respectable sale back in February, so it will be worth noting what prices can be garnered from MJF’s fandom.

Be sure to check out the hits that come from 2021 Upper Deck AEW Spectrum.  This product only features 7 cards per box, so there are sure to be some valuable autos of all our aforementioned stars and more! With the prominent rise of AEW in the wrestling world, we imagine having to tweak this list in the near future.