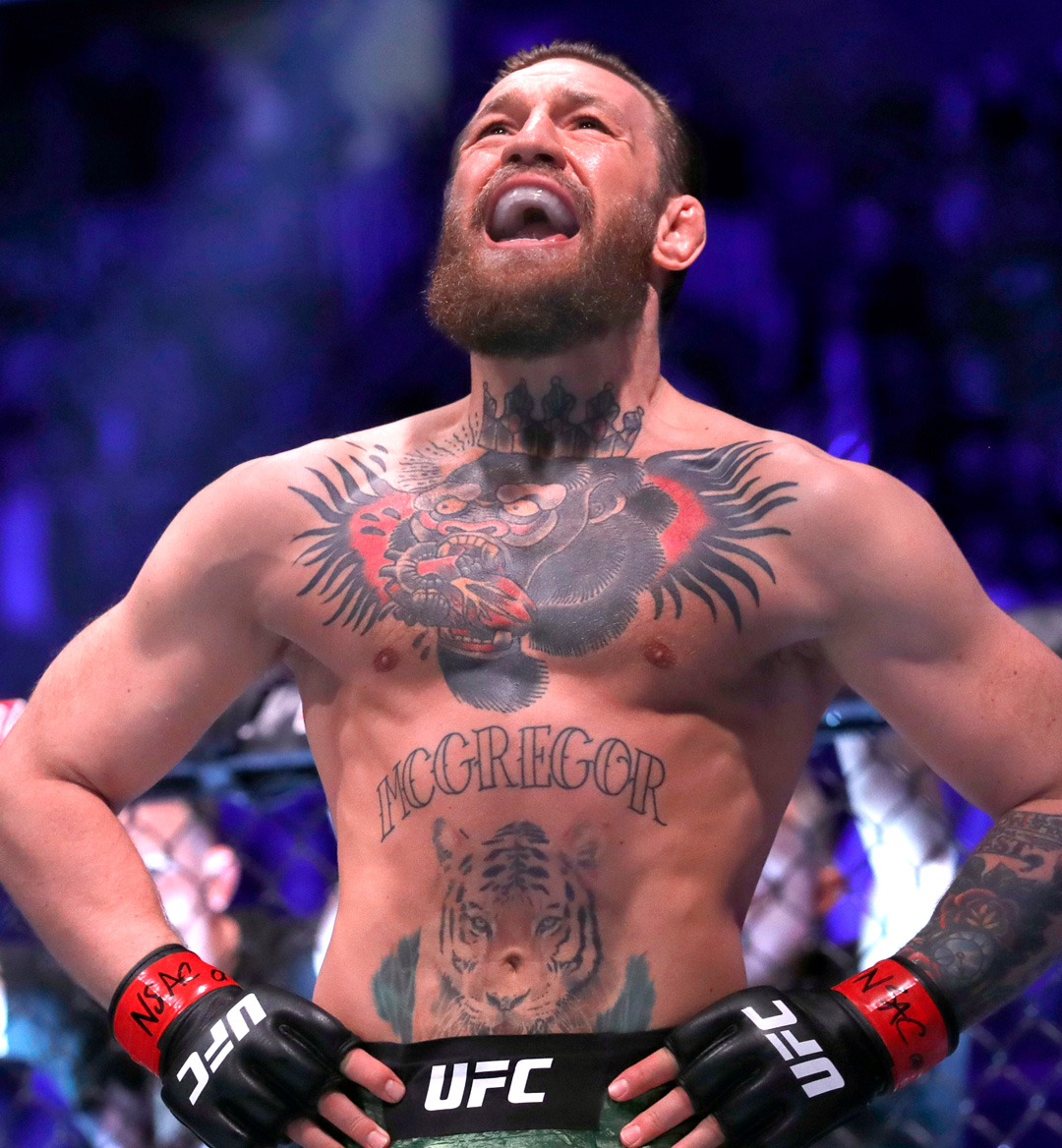 Behind the Gucci mink coats, beyond the private jets and Rolls Royces, and yes, even when looking past the loudmouth and savage trash talk…Conor McGregor has an outstanding career in the UFC.

Today, we are looking back on his six best performances in the octagon.

This fight felt different at the time. Before this fight, Conor was a brash striker with an unorthodox fighting style who had entered the UFC. However, when he took on “The Diamond,” it meant a serious rise in competition.

For many of McGregor’s bouts, it is his mental warfare that proves to be his biggest weapon, and this fight is one of the better examples of that. It was clear during the fight week media rounds and press conferences, Poirier had a legitimate disgust for the way McGregor behaved. Poirier seemed to be less concerned about winning as much as he was about shutting Conor up and derailing the hype train.

Even during the face off right before the fight, Conor was smiling. He was taunting Poirier to come get a piece of the action.

When the fight got underway, it was quick work. Just minutes into the first round, Conor landed his vintage left hand strike. The shot clipped right behind the ear of Poirier, a very vulnerable spot for fighters. He followed up that shot with multiple ground and pound blows until the referee stopped the fight.

The two will face off for a second time on January 23rd and I would suspect it will be a much closer contest.

An iconic performance on an iconic card 🙌

After surging through the ranks, McGregor was set to take on Jose Aldo for the featherweight belt. However, Aldo was unable to defend his title due to injury, which meant that an interim belt would be on the line for his scrap with Chad Mendes.

Leading up to the fight, the big question was whether or not Conor could handle a high-level wrestler. His previous bouts all featured fighters who were more known for their striking ability; Dustin Poirier, Max Holloway, ect. But Mendes did bring a different style to the table, and it raised eyebrows to that part of McGregor’s game.

The first round did bring some adversity for the Irishman. Mendes successfully took McGregor down and delivered some quality shots from the top position. But to be fair, McGregor was able to land some shots of his own from the bottom. If Mendes was going to play this ground and pound game, McGregor made sure he paid the price via elbows from the bottom.

In the second round, Mendes’ gas tank emptied. As he faded, McGregor got stronger and Conor was able to cut off the cage and land a straight left hand that dropped Mendes to his knees. McGregor was crowned as the interim featherweight champion that night.

The first fight with Nate Diaz was a bit of a wake up call for McGregor. It happens to all of the greats (except Khabib). The confidence that McGregor walked into the cage with made him so dangerous, and ultimately might be what cost him the first bout with Diaz. In their first fight, McGregor found success in the first round. However, he appeared to think he would finish Diaz early in the bout, and Diaz stuck around. He weathered the storm and fired back. It was McGregor’s first loss in the UFC.

When the two rematched, most people expected a more conservative Conor. It was clear that Conor needed to save some energy, in case the fight lasted all five rounds. In the first round, Conor landed multiple left hands that dropped Diaz and in addition, he put in major work to the front leg of Diaz. Through the second round, McGregor continued to cruise. At the end of round two, Diaz clawed back. The two went back and forth for all five rounds. McGregor would land monster shots, staggering Diaz. The Stockton native would wear a shot and respond with more pressure. At times, McGregor was forced to seriously retreat.

At the end of the night, McGregor finished with his hand raised. It was not his “cleanest” performance, but undeniably one of his trademark wins.

This is a performance that is more than worthy of being in the number one spot. It’s as close to flawless as it gets. The fight was bold and the performance was even bolder.

It was no secret that Conor was eying up the 155 lb division. After claiming gold at 145 lbs, Conor set his sights on  a second belt. Although fighters had previously won belts in different weight classes, no fighter had held two belts simultaneously. It would be a first for the company.

But that’s who McGregor is. He is daring. He takes risks. And when you are capable of what he is capable of doing in the ring, then, fook it… I would be too.

McGregor challenged Eddie Alvarez for the lightweight belt after Alvarez snagged the championship throne from Rafael Dos Anjos in an epic performance. Alvarez was known as a tough, rugged fighter… but probably was discredited for being a great martial artist.

The Notorious ran through Alvarez. In the first round he dropped Alvarez on numerous occasions. McGregor looked comfortable and at ease the whole time. His left hand demonstrated that mythological like power. When Alvarez would strike, Conor would disappear. And when Alvarez was done, McGregor was right back in his face.

The fight ended in the second round from an incredible combination from McGregor. He landed four to five consecutive shots, leaving Alvarez defenseless.

It was art at its finest. And yet, somehow, his performance on the mic after the fight was even better.

It is his best performance and needs the fewest words to explain.

Jose Aldo was the pound for pound king of the UFC. A monster. And most people would agree when I say, the fight was over before it started.

McGregor sent a barrage of verbal attacks on Aldo before their matchup. It was mental warfare at its finest. It is a question asked frequently in combat sports, “did he cross the line.” McGregor attacked Aldo’s home country, throwing insults at Aldo in his native tongue. Aldo was clearly angered by McGregor’s antics.

When the bout began, Joe Rogan saw the mental warfare had taken its toll. He claimed that Aldo looked stiff, while “Conor’s relaxed and smiling.” As Rogan said it, McGregor landed the shot. *THE shot*. It was the left hand McGregor said he would land and it was just as he predicted.

13 seconds. That is all it took. McGregor not only took down the giant of the division but also captured the imagination of fighting fans everywhere. McGregor was more than brash trash-talk. He was here to stay.

Who Are the Fastest NBA Players?