Everything You Need To Know About Japanese Pro-Wrestling 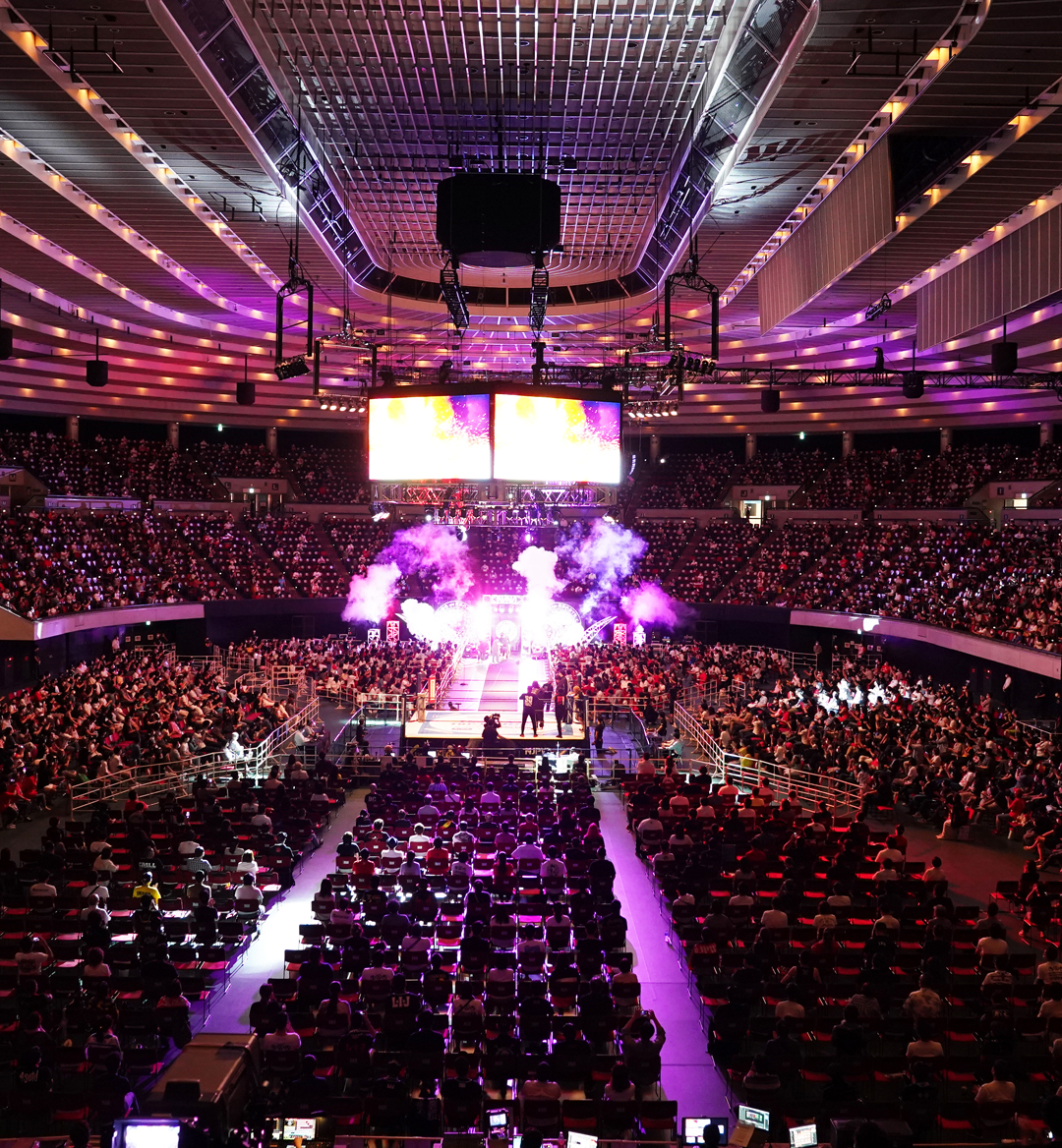 Because pro-wrestling has become an increasingly niche hobby in the Western world since it fell out of the popular zeitgeist in the early/mid-’00s, for many in the United States, it’s impossible to imagine that alternate styles of pro-wrestling even exist. In fact, American pro-wrestling is only a small example of the various genres of pro-wrestling that are exhibited in the world — and although its aesthetic has come to define the medium of pro-wrestling, it is often quite limited in its ability to tell specific stories. This typically Americentrist view of pro-wrestling (and pop-culture writ large) is standard around the globe, meaning that the exciting world of Japanese pro-wrestling is often totally ignored by more casual fans.

Puroresu, a word that comes from the Japanese pronunciation of “professional wrestling,” has come to represent the distinctly Japanese style of live combat theater. Although sumo wrestling had existed in Japan long before pro-wrestling garnered any popularity, sumo is considered a “legitimate” sport in that the outcomes are not pre-determined and therefore has quite little in common with pro-wrestling as an art form — at least on a formal level. Matsuda Sorakichi, who is considered Japan’s first pro-wrestler, had thrown Western-style wrestling exhibitions in Tokyo in 1887, according to Nippon.com, but this form of entertainment didn’t really catch on as a cultural phenomenon until after World War II. Pro-wrestling’s rise to prominence in Japan truly began in the 1950s. A performer named Rikidōzan is considered to have helped the genre gain popularity by staging elaborate theatrical shows in which gaijin (usually Americans) were trounced by native Japanese heroes, playing on post-Atom Bomb resentments against Westerners. Turns out the trope of the villainous foreigner isn’t unique to American pro-wrestling.

Rikidōzan eventually established the Japan Pro Wrestling Alliance in 1953. This federation was presented as a “real” sport and was likened to baseball and sumo in popularity. By the early 1960s, rival federations began popping up, including Tokyo Pro Wrestling and the International Wrestling Enterprise. A decade later, New Japan Pro-Wrestling and All Japan Pro-Wrestling would dominate the scene and began attracting global audiences — stars like Antonio Inoki were especially credited for this development through his spectacular fights against Mohammed Ali and Olympic jūdōka Willem Ruska.

By the 1990s, the global popularity of Japanese pro-wrestling had waned a bit, but within Japan, women’s wrestling had amassed unfathomable popularity that is sort of incomparable to anything in American pop culture. For example, Chigusa Nagayo (who we ranked as the 6th best pro-wrestler of all time) was at one point also the number 1 pop star in the country. Western journalist Dave Meltzer, who remains the world’s most esteemed chronicler and critic of pro-wrestling, had championed Japanese women’s wrestling and regularly rated women’s matches higher than men’s matches at the time—highlighting the excellence of these athletes. Collaborations between the World Wrestling Federation and All Japan Women’s Pro-Wrestling were attempted and drew some attention to this sub-genre—but the extent to which WWF CEO Vince McMahon’s ignorance prevented him from seeing the star quality of certain Japanese grapplers and the potential for success of Japanese fighters remains a huge debate to this day.

New Japan Pro-Wrestling has endured through a significant waning of wrestling’s popularity in Japan and has in the past decade garnered cult popularity in the United States amongst wrestling fans who are seeking a well-produced alternative to the WWE’s kid-friendly (and often insultingly juvenile) aesthetic. NJPW has produced significant global stars, including several gaijin who have returned West, including Candian fighter Kenny Omega of All Elite Wrestling. NJPW events have an aura of prestige that Western wrestling events have failed to create, and despite the time differences, Western audiences regularly follow the live events with zeal. American and Canadian wrestlers regularly do tours of Japan to bolster their prestige and skillset. Although All Japan Pro-Wrestling and Pro-Wrestling Noah (a federation founded in 2000 by the legendary fighter Mistuharu Misawa) still exist, their ultra-serious presentation has turned them into ultra-niche products for the most hardcore fans. Japan’s less serious promotion, DDT (a now-empty acronym that once stood for Dramatic Dream Team) Pro-wrestling has been holding more unconventional, intergender, and comedic matches since 1997 and has garnered a similarly small cult following in the West.

Women’s wrestling in Japan has also waned in popularity but continues to be a deeply respected style amongst wrestling die-hards. Stardom is probably the most prominent of what’s known as Joshi puroresu, although beloved fighter Meiko Satomura’s much smaller Sendai Girls federation is for the first time being made legitimately available through IWTV and is attracting a lot of attention because of its ultra-high quality. Calls from Western fans to integrate men’s and women’s wrestling in Japan have been ignored (perhaps due to cultural differences in perceptions and attitudes around gender), although NJPW did feature a women’s match in a collaboration with Stardom at the Wrestle Kingdom 14 (NJPW’s Wrestlemania analog) in January of 2020. Any plans for future integration remain unclear, as pro-wrestling in Japan has been on a pause due to the novel Coronavirus and is only just now returning.

Japanese pro-wrestling differs from American pro-wrestling in several notable ways. The most obvious is that there are slight variations in rules: for example, it takes 10 seconds longer to be counted out, and refs are more tolerant — meaning that run-ins and weapon usage don’t always result in immediate disqualifications in the same way as in the US. Beyond that: puroresu is generally more serious than what’s seen in the States—and while there is still a bevy of predominantly comedic wrestlers and matches, the stories are presented as more sports-like than the soap opera style of the WWE. Factions or teams play a bigger role in Japanese pro-wrestling storytelling — at least in NJPW, where most wrestlers are recruited by a crew and swear fealty to that stable. This plays a huge part in the storytelling, as loyalty and betrayal are important motifs in the most popular puroresu narratives. Matches in Japanese wrestling are often far longer and differently paced than American pro-wrestling — Kenny Omega’s 5+-star bouts, for example, sometimes exceeded an hour in length. And this applies to longer-term storytelling as well, where a character’s narrative arc or significant feuds may span several years or even decades (compared to WWE stories that often fizzle out within weeks or months).

The brutality of Japanese pro-wrestling is notable as well: while American audiences often decry American pro-wrestling as looking quite obviously “fake” the same can not be said of Japanese pro-wrestling which is sometimes frighteningly real-looking. What’s become known as “Japanese Strong Style” focuses on violent kicks and punches that are not pulled back. Pro-Wrestling Noah in particular is harder to distinguish from MMA fights and often feature long sequences of absolutely devastating traded blows between foes.