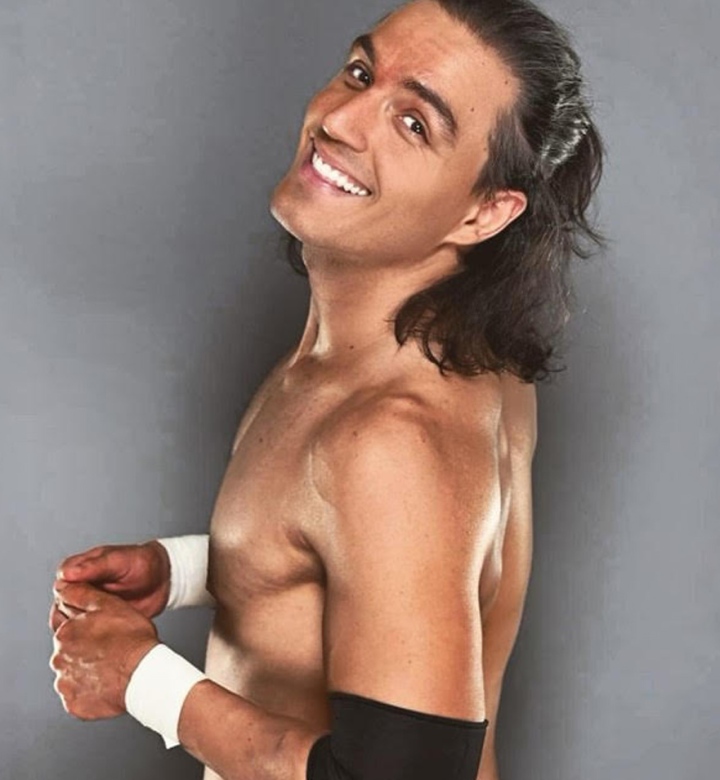 Is pro wrestling an art or a sport? It’s a debate that’s plagued the business since its inception—and a topic that pops up on Twitter at least once a month. Old-school industry stalwarts maintain that even though the outcomes of fights are pre-determined, the athleticism required in pro wrestling relegates it to the realm of sports. Newer generations of grapplers, on the other hand, defend the narrative elements inherent to the medium and reify storytelling as the main feature of the entertainment, placing pro wrestling in the domain of art.

And then there’s RJ City. The 31-year-old, Toronto-based wrestler and stand-up comedian won’t take a firm stance on the endless art vs. sport dialogue, but he’s more than happy to remind you that it’s all fucking fake.

Although discussing the “fakeness” of wrestling has been a taboo within the wrestling world, RJ is one of many in a new generation of performers who are bucking tradition and calling out the charade implicit in their work. On social media, RJ can regularly be seen mocking wrestlers’ outdated commitment to kayfabe, alongside cutting psychological insights that often point to the fragile masculinity of his opponents.

I love when a wrestler suddenly debuts a new top rope move and I think "Wow, you must have been really insecure."

In the ring, RJ invokes the ire of audiences by doing exactly the opposite of what they came for, all while whistling show tunes. RJ’s deconstructionist take on pro wrestling has led others to label him as a postmodern revolutionary, but RJ thinks of himself as more of a muppet.

While most wrestlers are drawing from an image repertoire filled with hyper-muscular superheroes or grappling legends of yore, RJ’s cultural touchstones were shaped as much by Old Hollywood and Broadway musicals as by the Attitude Era and the days of territories.

“My grandmother and my mother very much ruined me culturally as a kid. They showed me Abbot and Costello and said, ‘You have to watch this immediately. This is the best.’ They showed me The Nutty Professor and said, ‘This is the best.’ And after that, there’s no turning back,” RJ says. “I thought that was pop culture. I was like a sociological experiment. As a kid in kindergarten, I’m singing Ethel Merman and my teachers are going, ‘What the fuck?’”

Drawn to the colors, humor and glamour of pro wrestling, RJ’s family politely tolerated his more violent hobby—and, always a bit out of step with the times, RJ was remained blithely unaware as wrestling fell out of the zeitgeist’s favor.

“In high school I continued to enjoy it even though all my friends kind of dropped out of it,” RJ says. “I was like, ‘I’m going to be a wrestler!’—and that’s cute when you’re a kid, but by the time you get to university, it was like, ‘Are you fucking serious? What is wrong with you?’ I was very inside the wrestling bubble. I believed the propaganda. I didn’t really grasp how niche it was at the time.”

Despite the doubters, RJ began training while studying in school, which in a sing-songy voice he simply and somewhat sarcastically described as “great and weird.” Following college, RJ quickly landed a huge role in the campy horror film Monster Brawl alongside some serious wrestling superstars. At the exact same time, he also landed his first television role in the little-known but deeply beloved Canadian children’s show Splatalot. The fortuitous timing of these successes, along with some of his first matches in which he was immediately established as a smart-alecky heel, quickly made him a rising star. After that, RJ also began performing in comedy clubs, where he’d take on the wrestling industry as an object of his derision. His biting witticisms and bratty demeanor became his calling card, as did his bizarrely mellifluous voice.

“It was very much a process of figuring out what people wanted. At a certain point, I realized when I stopped worrying and trying to be cool, I became much better. One show I was just singing backstage, goofing around, singing ‘Strangers in the Night.’ Someone said, ‘You should sing in the ring.’ And the second I did it—instant heat. The boos were so loud. And more importantly it was different from anything else on the card,” RJ recalls.

RJ has since refined his in-ring persona as a snively, fourth-wall-breaking contrarian touring the United States and Canada on the indies. And while other wrestlers are working themselves—often literally to death—RJ’s oppositional and defiant philosophy differentiates him from the endless slew of self-serious sportsmen.

“The goal was always to do what everyone else isn’t. If everyone else is coming out and yelling, I’m going to come out slowly and calmly,” RJ says. “Everyone else is coming out ready to fight; I’m just going to sit on the turnbuckle and cross my legs like I don’t give a shit. My idea is to be as non-aggressive as possible just to see what happens. It’s me going, ‘What do they want, how can I not give it to them?’ It’s not about being one of the boys for me…In one sense, people might say, ‘Oh, he’s ruining the illusion of wrestling.’ But the real illusion is that there was an illusion at all. I seem to be the only person who is keenly aware I’m inside a wrestling show.”

Another element started emerging in the character as well: anxiety. Comedians have always used humor to deal with pain, and suddenly RJ’s bitter schtick became tinged with a more vulnerable edge. His promos started pointing to his latent neuroses, and the character quickly became as relatable as he was hateable.

“When I was a kid, every night I would have an anxiety attack. I couldn’t go to bed, I would just freak out for whatever reason. I had to see a therapist and figure it out,” he says. “Eventually it went away on its own, but I still have anxiety about, well, anything! So that became a part of me and my humor. I felt very disingenuous pretending that I didn’t have it when I did. It didn’t make me feel better. And we all have it! This is how I really feel: I’m terrified of this person, I don’t want to get hurt, I don’t want to do this match. And no one’s saying that in a wrestling context.”

“So [the RJ City character] is sort of trapped in his own hell,” RJ continued. “It’s very Twilight Zone. It was like the universe said to me, ‘You wished it? Your wish came true.’ And for whatever reason I’ve decided to ride out this trajectory.”

RJ’s wild ride has taken a new meta-cultural twist as of late in his exploits, along with his unexpected tag partner and new best friend, David Arquette. The postmodern echoes come through loud and clear: The actor who once starred in a horror franchise that poked fun at the stale conventions of the genre has now been paired with a wrestler who does the same in his fights.

The two became acquainted through mutual buddies as Arquette sought to reprise his glory days from the 2000 film Ready to Rumble, during which he became embroiled in several actual wrestling angles. They quickly bonded over Hollywood gossip, and the elder Arquette was taken under RJ’s wing as a kind of strange kohai. The friendship blossomed—as wrestling friendships often do—into a worked feud that garnered interest from mainstream celebrity gossip websites like TMZ.

People always ask me, “why the fuck are you wrestling David Arquette?”, so I’ve collected our entire feud into this anthology.
https://t.co/zGodySKozt

Following a blowout match—Arquette fought with three ribs he’d cracked in training days before—the two have paired up as a lovable but reluctant duo.

After that match, “he knew that I could help him figure this whole thing out,” RJ said of Arquette. “So we thought, ‘What if we team, but I don’t want to team with you?’ Because I kind of don’t—it’s annoying, he doesn’t know how to wrestle! The gimmick is that it’s not a gimmick. He’ll say things like, ‘I want to do an Undertaker dive,’ and I have to be like, ‘Well, you’ve never done one before. You have a wife. You have children. So maybe you should not.’ All that stuff came out of our relationship and me showing him what wrestling is.”

As for the future? Well, who knows. How much RJ would be allowed to keep his self-aware act in bigger TV wrestling companies is a huge question, and the extent to which he’d have to water down his character for the sake of accessibility or family-friendliness remains to be seen. So while other wrestlers may have a list of dream opponents, titles they want to snatch and companies they want to star in, RJ is content just seeing where things go.

“If you took my goals from two years ago and compared them to my actual reality now? My actual reality turned out to be way more wonderful and weird than my goals,” he says. “That’s not to make any statement about who I would or wouldn’t want to be signed with. All I really know is that I’m really content at this point to not have a plan and see where the weirdness takes me.”