Can Jayson Tatum Live Up to the Hype in the NBA Finals? 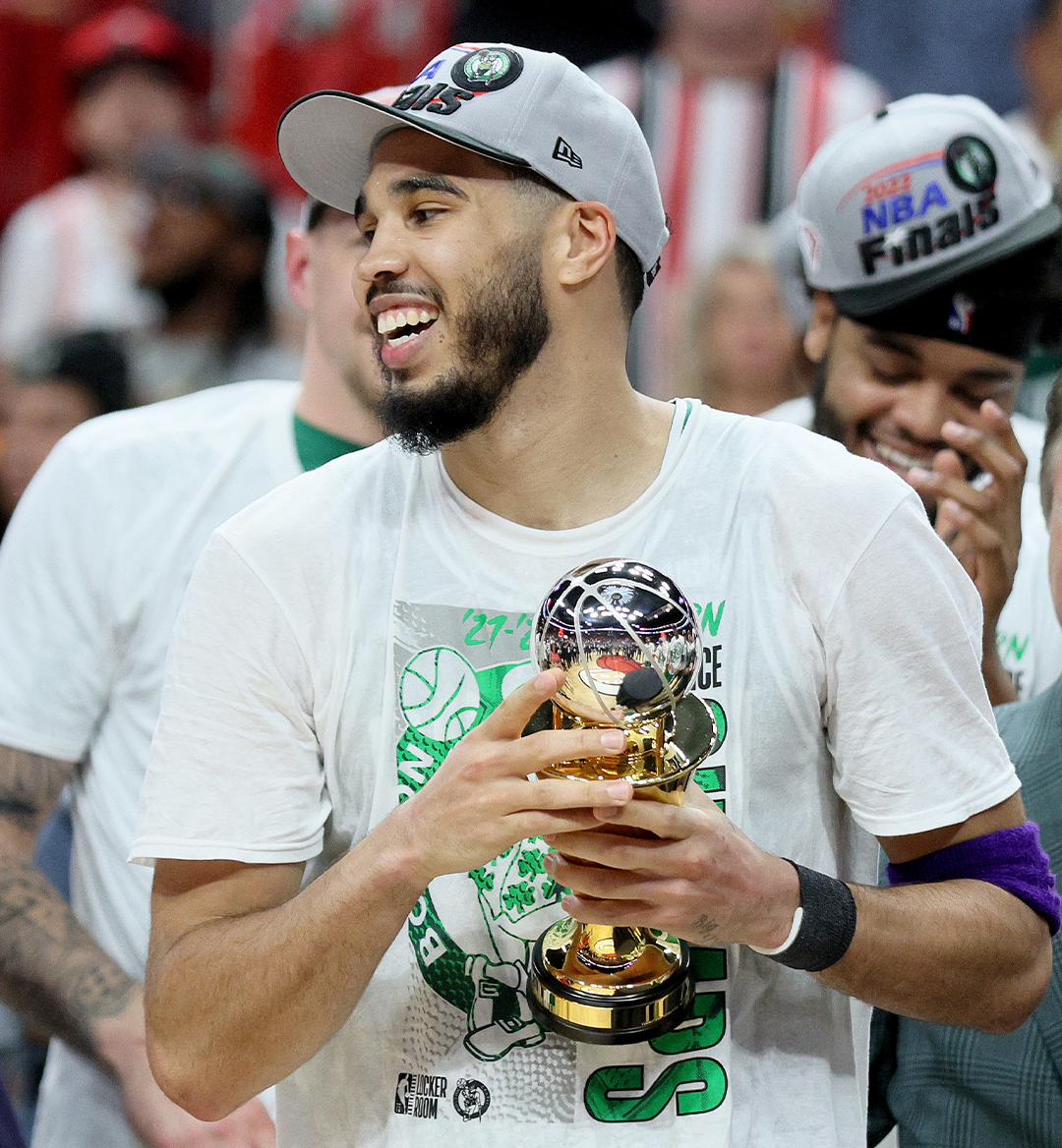 Jayson Tatum is the next, great NBA superstar—or so we’re told. At just 24 years old, he’s been the breakout player of these playoffs, leading the Boston Celtics to the Finals and grabbing the inaugural Eastern Conference Finals MVP along the way. His stats are sparkling (26.9 points, 8.0 rebounds and 4.4 assists per game) and his tough shot-making gives him a sense of unguardable inevitability. A studied follower of the Mamba Mentality, Tatum has recreated his mentor’s graceful midrange game—and also his knack for a certain kind of cringey, performative grindset. Whereas new-age stars like Nikola Jokic or Giannis Antetokounmpo are both future Hall of Famers in unprecedented ways, Tatum is an All-Star straight out of central casting. He went to Duke and plays for the Celtics and scores lots of points. He can sling cold cults like a champ. There’s a certain tautology to it all: Tatum is a star because everyone keeps saying he’s a star.

Even if Tatum is certainly a great player, he also hasn’t been the undisputed top dog in any of Boston’s playoff series this year. Against the Nets, Tatum swept Kevin Durant, but Durant had to contend with Boston’s league-leading defense and Tatum got to feast on Bruce Brown. In the second round, Tatum was soundly outdueled by Giannis Antetokounmpo, a sobering reminder of the gap between Tatum and the NBA’s absolute elite. Only the staunchest Tatum-heads would argue that Tatum played better than Jimmy Butler after Butler and an undermanned Heat team nearly pipped the Celtics for a Finals berth.

A cynic could say that the Boston Media Mafia has manufactured consent around their favorite son. Ever since Tatum boomed Lebron James in the 2019 Eastern Conference Finals, the media apparatchik has thrown its full weight behind Tatum; Bill Simmons and his cartel of influential, trend-setting media members with New England ties have taken up Tatum as their cause celebre and elevated his standing in the general basketball discourse. To his credit, Tatum has validated a lot of the media's shamrock-tinted gaslighting—he truly is among the best two dozen basketball players alive. And yet, when a Celtic who was patently not the most valuable player in the Eastern Conference Finals saunters across the stage to collect the freshly minted Larry Bird and Bob Cousy trophies, it’s hard to not grow suspicious of how and why it happened.

In this sense, there’s a growing rupture between the perception that Tatum is in the midst of an all-time great postseason run and the reality that he’s merely having a very good one. Notably, Tatum is a lackluster playmaker for a player this lauded and prolific—amongst the 64 players who Basketball Index classifies as either a “shot creator” or “primary ball-handler,” Tatum ranks 50th in passing creation volume (their proprietary metric for evaluating the true impact of a player’s passing).

While Tatum has pumped up his assist totals in the playoffs to nearly six per game, his playmaking ceiling is capped by his inability to stress multiple layers of a defense. Despite his size and athleticism, the 6’8 Tatum is a begrudging interior presence, scoring only 6.9 points on his 13.9 drives per game in the ‘yoffs, figures that lag behind gimmicky guards like Jordan Clarkson and centers like Karl-Anthony Towns. Despite his marionette-ish slipperiness with the ball, Tatum’s handle is more flashy than functional at this point; hounded by Miami’s handsy defenders, he barfed up nearly five turnovers a game.

As such, his reliance on his jumper allows Tatum to thrive against nearly every imaginable defensive coverage, but it leaves the Celtics vulnerable to spells of point-less grossness if Tatum is running cold; he has an icy 51.4 percent True Shooting in Boston’s 31 losses, compared to a rosier 61.3 percent True Shooting mark in their 51 wins. Tatum's greatest asset as a scorer (his gobsmacking shot-making) feeds into his main offensive deficiency—when you can routinely drain impossible shots yourself, there’s no incentive to fuss for easier ones for your teammates. At a certain point for Tatum and the Celtics, being a bucket becomes a problem.

Although these Finals don’t represent some legacy-defining moment for the 24 year-old Tatum, they will provide some much-needed present clarity—it’s not that Boston’s boy-emperor has no clothes, but it’s unknown if he’s dressed in stylish gorpcore.

If Tatum is truly the generational scorer that a city full of lesser Wahlberg siblings believes him to be, he should have no problem vivisecting Golden State’s switching defense. His fellow All-NBA First-Teamer Luka Doncic just hung 32 points, nine rebounds and 6 assists per game on the Warriors, so surely Tatum can do the same, right? By taking home the Bill Russell Finals MVP trophy to pair with his Larry Bird and Bob Cousy ones, Tatum could once and for all prove he's not a creation of Boston-obsessed basket-bloggers. For Boston to capture the title, Tatum needs to prove his lovers correct.