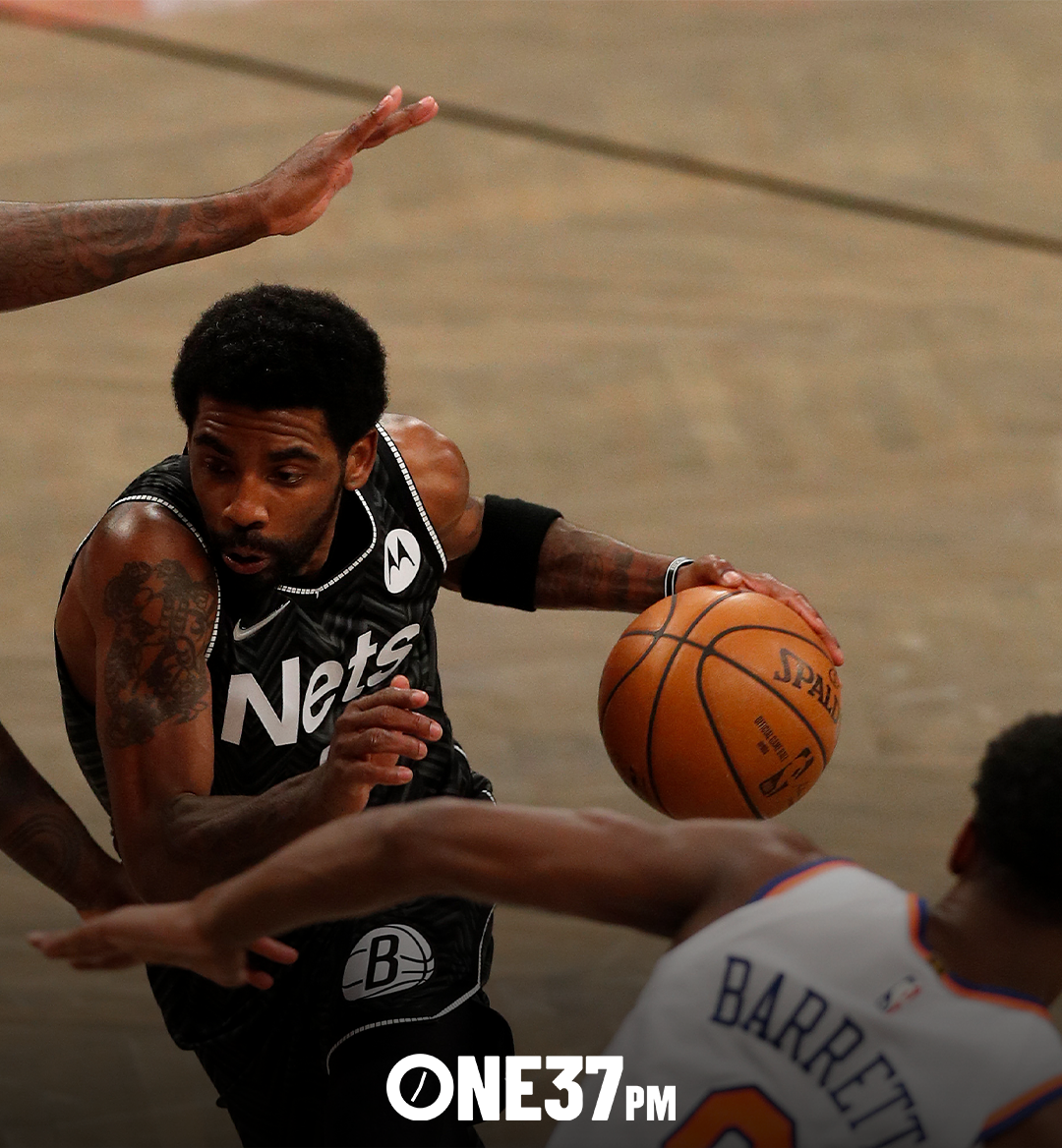 Like Taylor Swift or 28 people who got the Johnson & Johnson vaccine, the NBA is defined by bad blood. In the 1960s, Bill Russell and Wilt Chamberlain wrestled for supremacy and introduced the NBA to the American mainstream. Two decades later, Magic Johnson and Larry Bird rescued the league from tape-delayed oblivion with their epic, decade-long duel. If The Last Dance proved anything beyond the merits of taking things personally, it was that Michael Jordan neither produced nor possessed any shortage of enmity.

More than nearly any team, the New York Knicks have had a rich history of hatred. Throughout their existence, the Knicks have steadily added to their Rolodex of enemies: the Baltimore Bullets in the 1960s and 70s; the Miami Heat, Indiana Pacers and Chicago Bulls in the 90s; their own fans in the 2000s and 2010s. But before this year, despite sharing a division and a metropolitan area for 44 years, the Knicks and the New Jersey/Brooklyn Nets were more associates than adversaries. Time was, the Knicks and Nets were parallel playmates failing to sync up their sporadic successes. Today, with New York City hosting playoff games across two boroughs for only the second time ever, they offer a roadmap for how rivalries are forged and fed in 2021.

To be sure, this is hardly a traditional rivalry. “Until they meet in the playoffs,” says Casey Powell (a.k.a. CP the Fanchise), the founder of the popular YouTube channel KnicksFanTV, “I don’t know how serious the hatred can be.” Still, it’s one that feels uniquely modern. While the NBA’s erstwhile rivalries evidenced how familiarity breeds contempt, the increase of player movement across the league has prevented teams and players from gaining repeat exposure to each other over the years. Gone are the days of centers performing stunners on guards and coaches clinging to a player’s leg like moss on a rock; now, cold wars are played out on Twitter and prestige magazine covers. In 2021, rivalries have found a new catalyst and medium: trolling.

“On both sides, I think there’s a lot of mutual respect,” says Matt Brooks, a reporter for the Nets blog NetsDaily. “The fan bases, though, have a total rivalry. Especially leading up to games, it’s really heated with fans talking smack, going back and forth with each other. The fan side of it is very much alive, even if that hatred and vitriol isn’t necessarily there between the actual players.”

Although the intensity of the Knicks-Nets rivalry has been ratcheted up because of the teams’ recent success, the games themselves are besides the point. At 41-31, the Knicks may be in the playoffs for the first time in eight years, but they’re hardly equals to the Nets, who finished seven games ahead of the Knicks in the standings and might have the greatest offense in NBA history. Instead, the results of the games are secondary to what the games represent, each contest prismatically reflecting and refracting the goals and agendas of the participants.

To Knicks fans, everything is about the Knicks except the Knicks—the Knicks themselves are about pride. Before this season, the Knicks existed within the contemporary national consciousness as both punchline and an object of anthropological interest, and for good reason: the Knicks are owned by James Dolan--an nth-rate Eric Clapton larper--and have won exactly one playoff series since 2000. For people without irrational attachments to Pablo Prigioni, the Knicks’ foibles are objectively funny. Granted, it’s not as though the Knicks had an exclusive license on being embarrassing and bad—where are the Minnesota Timberwolves jokes in Pixar movies? Why hasn’t Chuck D hosted an exhaustively reported eight-part narrative podcast about how Vivek Randive’s terrible brain has sabotaged the Sacramento Kings?

“The Knicks have been bad,” says Powell, “but it’s almost like the national media goes out of their way to crap on us.”

By virtue of being one of the NBA’s legacy franchises, though, the Knicks are a centering force for sportspages, both local and national—for better or worse, in terms of Gotham basketball, all roads lead to Madison Square Garden. As such, coverage of the Nets can be read as an implicit (and sometimes explicit) barometer on the status of the Knicks. In the aftermath of signing Kyrie Irving and Kevin Durant in 2019 and adding two all-stars whom the Knicks openly lusted over, the Nets became an unwitting symbol for everything that the Knicks were not.

“Comparisons to the Nets have been used at times as a way to shit on the Knicks,” says “Shwinnypooh”, a staff writer for Knicks’ fan-site The Strickland and the host of the website’s podcast, Pod Strickland. “Even when celebrating the Nets’ achievements, it feels like the media makes it about the Knicks. When the Nets signed Kyrie Irving and Kevin Durant, the story wasn’t about what a great job the Nets did. Instead, it was framed as, ‘What’s wrong with the Knicks?’”

Beyond offering fertile ground for Trump-adjacent allegations of a biased mainstream media, this new inter-borough rivalry is an opportunity for Knicks fans to reaffirm and validate their identity. Over the last 20 years, Knicks fandom has been a bootless endeavor, the only suspense being whether the team would be shameful or merely embarrassing. At worst, to be a Knicks fan was masochism; at best, it was masochism.

“Brooklyn is a tech hub and attracts a lot of transplants,” says Powell, “but being a Knicks fan is really a generational thing. People pass it down through their families and that passion is clear.”

During these lean times, being a Knicks fan had no rewards beyond the community and identity offered by fandom; misery loves the company of nearly every basketball fan in the city. In this sense, the implication that the Nets offer a life raft for beleaguered hoops fans felt like a rebuke of the authenticity of Knicks fandom. And with the Knicks earning a surprising playoff berth, their fans are ready with receipts.

“When the Nets moved to Brooklyn,” remembers Alex Wolfe, the editor-in-chief of The Strickland and the host of the Locked On Knicks podcast, “their official marketing slogan was ‘taking over’ and it didn’t seem worth giving attention—you’re never going to convert us. But now that the Knicks are in the playoffs and have all this energy, there’s definitely some compulsion amongst fans to jab back, like, ‘How’s that ‘takeover’ going?’”

Whereas Knicks fans transpose a gnarled web of emotions and grievances onto the rivalry, Nets fans are still finding their roots in Brooklyn and have a simpler outlook as a result. “Nets fans aren’t like Knicks fans and vice versa,” says Chris Milholen, a reporter at Nets Daily, “but we’re all New Yorkers and there’s that attitude of wanting to chirp and let the other side know how you feel.”

Like their Manhattan counterparts, Nets fans recognize that their fiercest on-court battles exist in Philadelphia, Milwaukee and Toronto, well beyond the five boroughs. And like Knicks fans, Brooklynites are acutely aware of their team’s place within the city’s sports ecosystem.

Kevin Durant told a Knicks fan in an Instagram DM that he’d “absolutely love” for a Nets vs. Knicks playoff series.

Thoughts? Who would win? 🤔 pic.twitter.com/Lm8tKcQ1Uv

“The Knicks are the bigger team,” says Milholen, “At the end of the day, there’s no plaque for that; the city doesn’t give out a trophy. It’s a moral win for the Knicks, but it’s not really a title. The Nets are chasing championships.”

To some Nets fans, this title contention is such a trump card that it essentially nullifies any potential rivalry. After all, banners aren’t hung for beating an inferior team that happens to play nearby; rings aren’t awarded for ratioing a guy with RJ Barrett as his profile picture on Twitter. “If you ask the average Nets fan,” says Milholen, “they’ll say that the main focus is on winning a ring and that the whole ‘who runs New York’ discussion can wait for later.”

Posturing notwithstanding, this is a rivalry of insecurity stitched over status and authenticity. “Both sides pretend not to care and it’s the weirdest thing,” says Brooks. “They definitely care about each other because otherwise they wouldn’t be antagonizing each other.” Taken in tandem, these two teams function as a referendum on the nature of fandom. Should sports be a vessel for communal experience or personal satisfaction? The new Knicks/Nets rivalry is the result of contrapositive forces—one team trying to reckon with their history, the other trying to create a future.

“This,” says Brooks, “is the best rivalry in basketball that has nothing to do with basketball.”