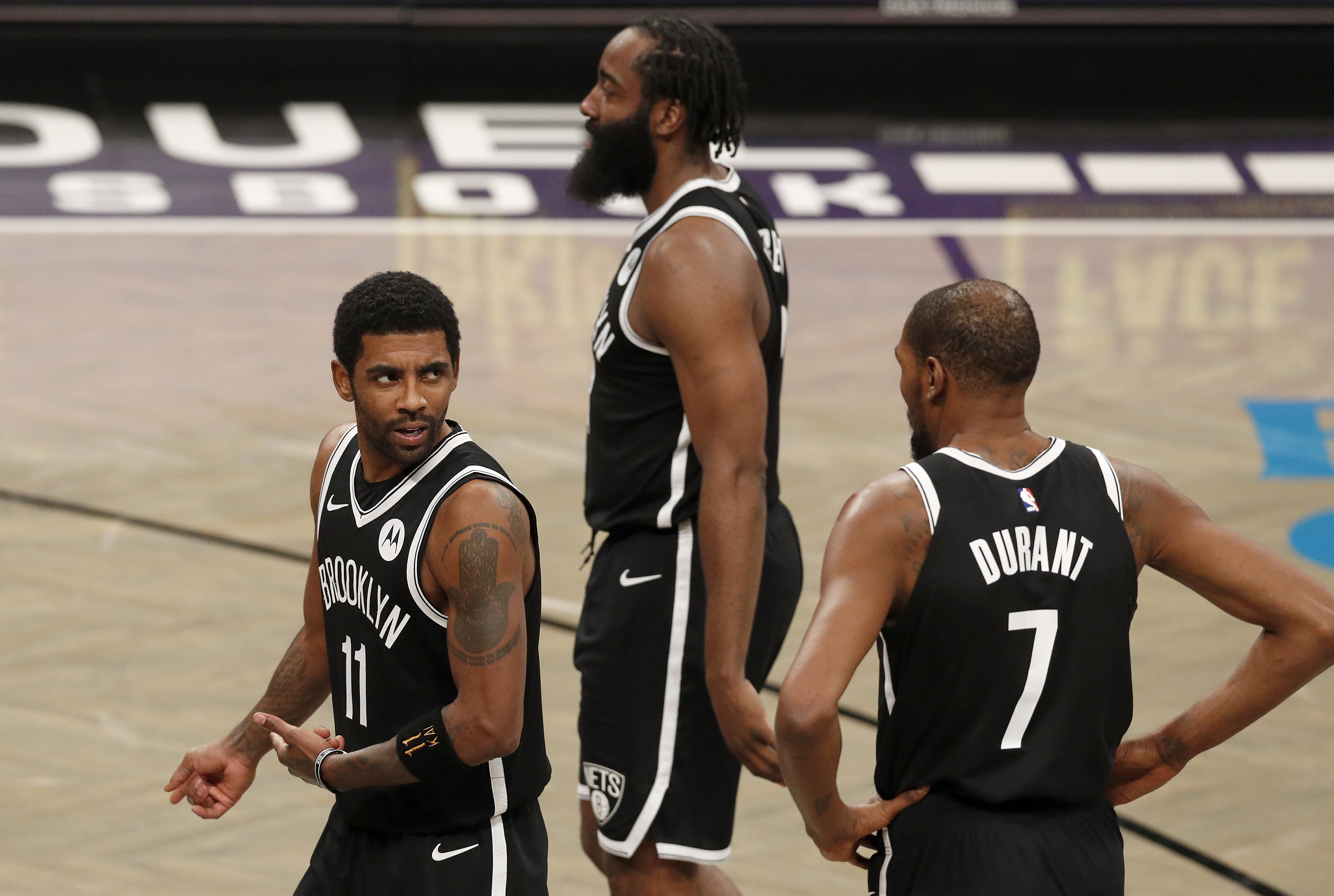 Ugh, okay: let’s talk about Kyrie Irving. For years, Irving has been a one-man uncertainty principle, zooming back and forth in the nebulous space between achieving enlightenment and being a total rube. He’s absurdly easy to meme--Kyrie burns sage! The earth is flat! What does government mean to you?—but his peculiarity has always possessed an endearing earnestness; he never seemed selfish or malicious as much as a guy who gets all his news from the comments section on a Joe Rogan YouTube clip. By refusing to get vaccinated, though, Irving crosses the rubicon from galaxy-brained to public health hazard, theoretically endangering the Nets’ championship aspirations and respiratory systems.

As an “anonymous” source who definitely isn’t Irving’s agent in a trenchcoat and fake glasses told The Athletic’s Shams Charania, “Kyrie wants to be a voice for the voiceless.”

"I've been covering the NBA now for almost 25 years. This is some of the stupidest nonsense I've ever seen. Just flat-out stupid."@stephenasmith reacts to the latest reports on Kyrie Irving. pic.twitter.com/zmAGP2oM3x

Lost in all the hubbub about Irving’s jab-lessness and subsequent leave of absence is a simple truth: this isn’t actually important. Although Irving is once again providing soap opera-y grist for NBA Twitter, the Brooklyn Nets are functionally disaster-proof—it’s immaterial whether Kyrie plays 82 games or 41 or zero. The Nets have assembled such an insane amount of talent that their virtuosity produces something like basketball nihilism. In fact, short of every ligament in both James Harden’s and Kevin Durant’s bodies snapping like rubber bands, the Nets are so good, nothing really matters.

Last year, Irving dropped any pretense of being a “traditional” point guard and emerged as the NBA’s most dangerous and stylish scoring guard, posting nearly 27 points per game on all-history efficiency. This year, the Nets are still the overwhelming title favorites while Irving remains exiled in an Elba of his own creation. Even after the Nets announced that Irving wouldn’t be allowed to join the team in any capacity until he gets vaccinated (the state of New York already mandated that only vaccinated Nets could play at Barclays Center), their championship odds remained practically unchanged, slipping from +195 to +200.

Since trading for James Harden last winter, the beauty of the Nets has been their stars’ extreme self-reliance. Whereas other players require certain situations to thrive (see: the brouhaha over the Ben Simmons/Joel Embiid fit), the Nets are almost context-agnostic. In Houston, Harden operated as a one-man offense, conjuring a string of top-ten outfits despite largely sharing the court with non-dribbling unitaskers. Similarly, Durant’s brand of scoring seems closer to golf than it does to basketball—Durant is so tall and so skilled that defenders practically melt away, leaving him playing against himself; against Milwaukee in last year’s playoffs, Durant nearly single-handedly defeated the Bucks while Irving nursed an ankle injury and Harden  gimped through the back half of the series after missing the first four games.

Beyond Durant and Harden, the Nets will be able to absorb Irving’s lost production by committee. By dint of Durant and Harden not really being guardable and demanding constant defensive attention, the flaws of Brooklyn’s supporting cast evaporate. Whereas Bruce Brown was once a guard who couldn't really shoot or dribble, suddenly, he was reinvented as a quasi-center, setting screens and lurking in the dunker spot. Before coming to Brooklyn, Blake Griffin hadn’t dunked in an NBA game for 464 days; as a Net, he rediscovered enough oomph to hang with the Bucks’ massive frontcourt in the playoffs. The Nets place such cognitive stress on defenses that any minor lapses quickly compound into major breakdowns. Trap a James Harden pick-and-roll too aggressively and Bruce Brown will slip into open space on the short roll against an outnumbered defense. Close out too tightly on Kevin Durant and watch the Nets’ drive-and-kick attack quickly animate with whirring motion.

While the Nets’ Big Three is obviously best at full-strength, there are diminishing returns on each of their considerable individual talents when the three are stacked together; as long as the Nets had at least one of Durant, Harden or Irving on the court, they scored at a rate at least equivalent to the NBA’s best offense of all time per PBP Stats—and when Durant and Harden played together, the Nets averaged 124.61 points per 100 possessions, a clownishly good figure. Moreover, according to Cleaning the Glass, the Nets were only 1.9 points per 100 possessions better when Irving was on the court than when he was on the bench (for what it’s worth, Harden was only +0.9 per 100 possessions); when the baseline level of performance is already so historically high, the presence of even more talent is just gilding on the lily.

In this sense, the very idea of adding Harden to this mix wasn’t to raise their ceiling; rather, Harden fortified their floor, offering insurance against Durant’s and Irving’s general injured-ness and flakiness. With or without Irving, the Nets are the best team in the Eastern Conference, if not the entire NBA. Something gold can stay.