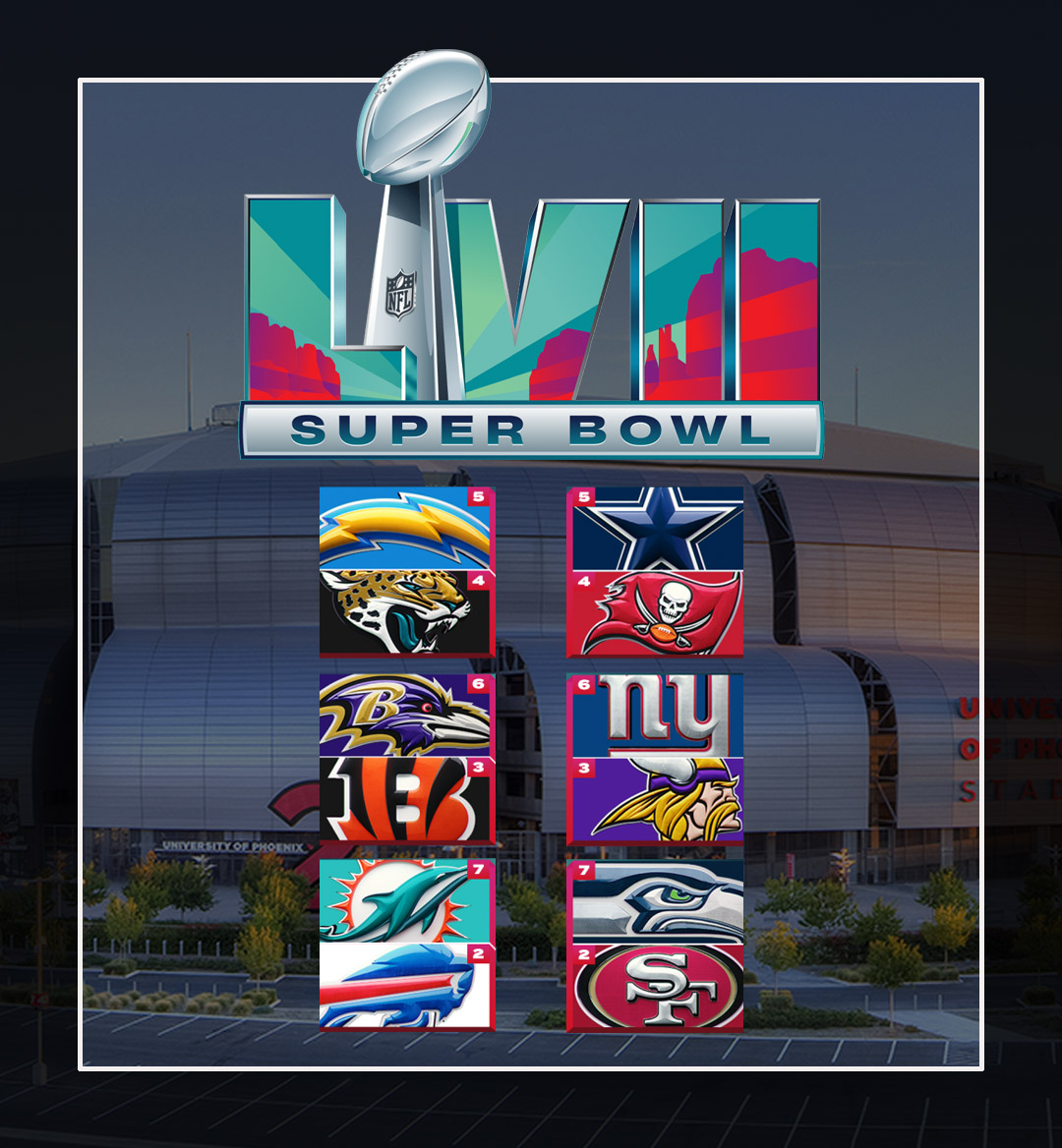 Wondering where your team fits in my NFL Playoff Power Rankings? Hint: It's definitely not the same as the Vegas odds!

Related: Which NFL Team Has the Most Super Bowl Wins?

After 18 weeks of NFL regular season madness, the playoffs are upon us. We have 14 squads vying for an appearance in Super Bowl LVII, including some who have yet to hoist a Lombardi trophy.

With Wild Card games slated for this Saturday, we figured it was time to break out our official playoff power rankings.

Disclaimer: All odds based off DraftKings lines as of date of publishing. 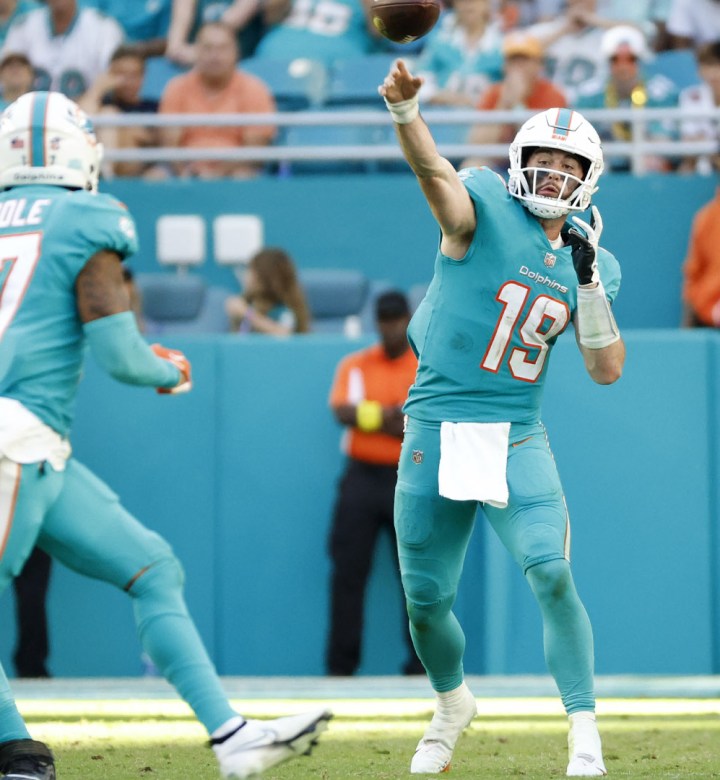 Kicking off my NFL playoff power rankings in the cellar is the team from South Beach.

First-year head coach Mike McDaniel did a commendable job of scheming the offense and utilizing Tua Tagovailoa’s abilities. However, Tua is unlikely to make an appearance this postseason, and we don’t see third-string QB Skylar Thompson being able to take down the Bills. The Dolphins will be back in the playoff picture next year, but they will very likely be sent home packing after this weekend. 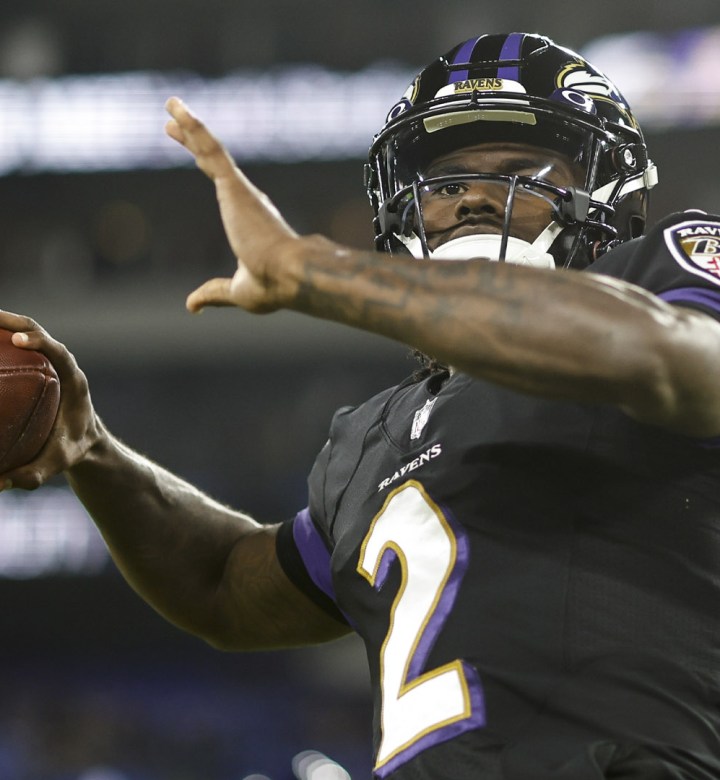 A Ravens fan may be upset to see their beloved black and purple this low on the list. However, with star QB Lamar Jackson on pace to miss another game, Baltimore faces quite a challenge in their first-round matchup against Cincinnati. Backup Tyler Huntley has held his own as Jackson’s replacement, but even he remains questionable for Sunday. 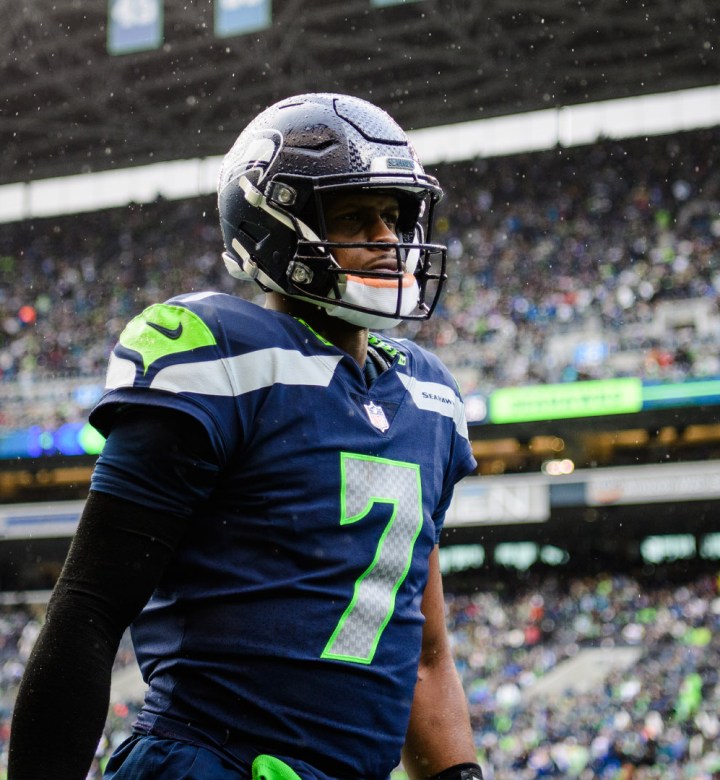 Geno Smith has been written off his whole career, yet he has found a career resurgence with the Seahawks this year. We all love a good comeback story, and Geno should be a starter next year, but Seattle is bound to have troubles against DeMeco Ryans’ defense. We aren’t writing the Hawks off just yet, but we are definitely clicking our pens. 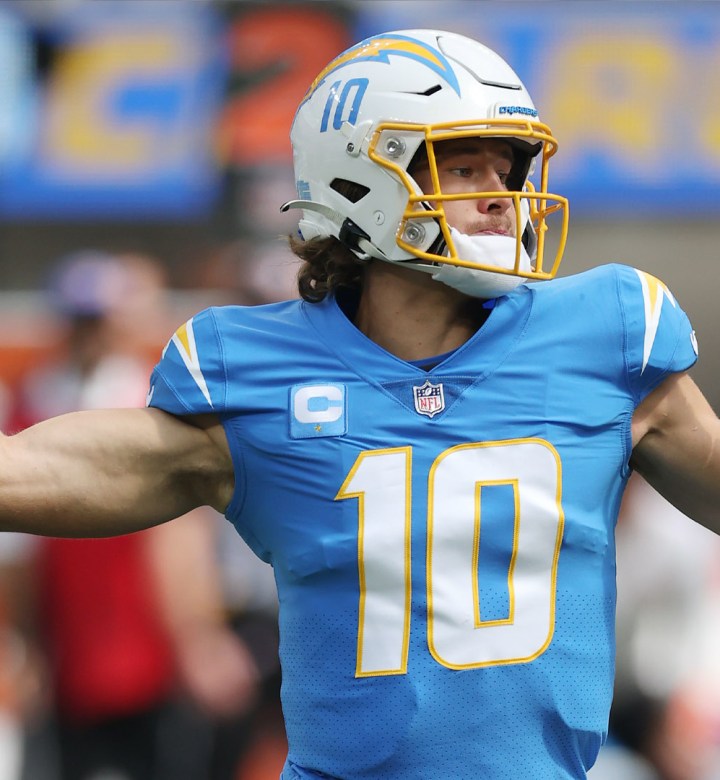 Justin Herbert, Austin Ekeler, Mike Williams and Keenan Allen are as talented as they come at their respective positions, and they will have to be on their A-game to get past a hungry Jags team.

If the Bolts can advance this week, it would likely set up an interesting matchup with the Chiefs. Brandon Staley and Joe Lombardi are going to have to make the right play calls this weekend, or they may find themselves on the hot seat. 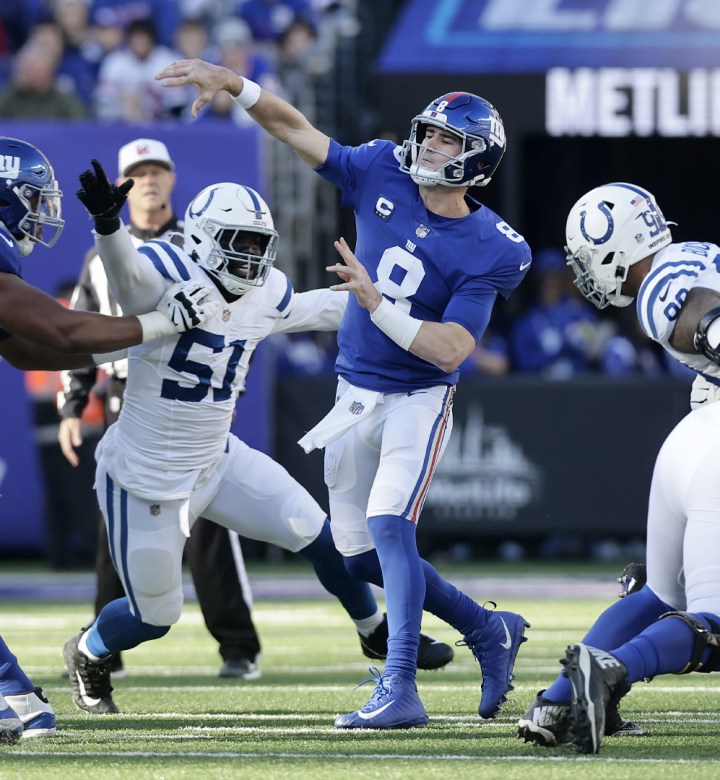 The G-Men are an enigma; they have gritted out tough games with fierce opponents, but they have also played down to poor competition. If Saquon Barkley can continue his ground-and-pound style of play against a questionable Minnesota defense, this one could get interesting. 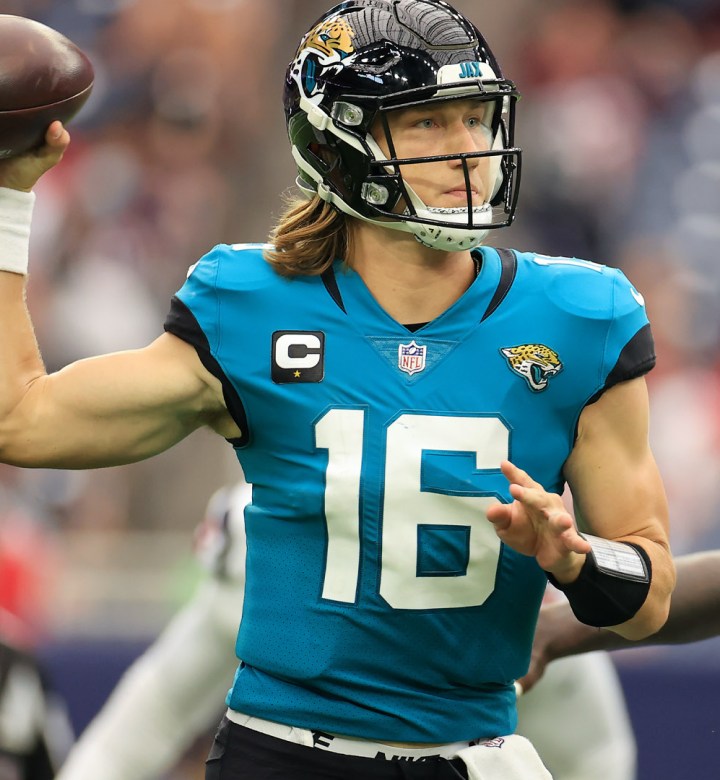 In October, no one would have expected the Jags to be where they are now. Sophomore QB Trevor Lawrence is proving why he was drafted #1 overall, winning handily in his last three games. This weekend’s matchup with the Chargers could end up in a shootout, and we see the Jags getting the edge and advancing to play Kansas City. 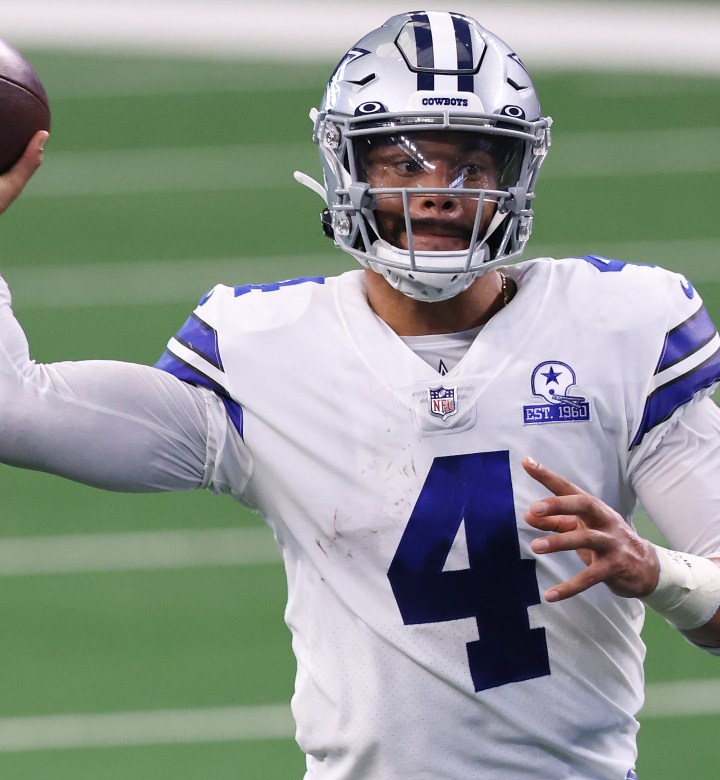 A month ago, America’s team would have been ranked a lot higher. Dak Prescott is falling apart behind center for the Cowboys, and he leads the league in interceptions. This team isn’t built for those tough winter playoff battles, and we see them getting bounced by the Bucs in the first round. 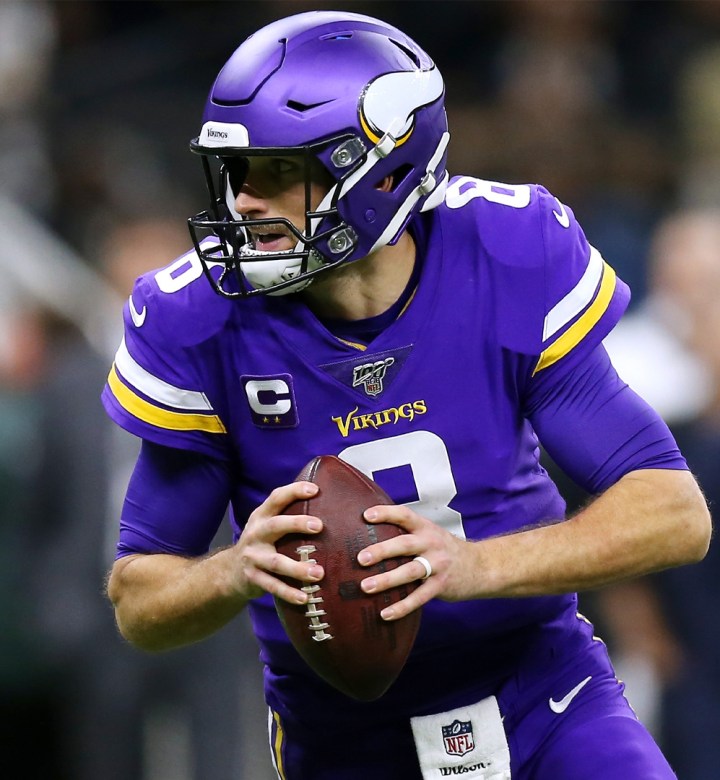 After several triumphant performances, the question still remains: can Kirk Cousins show up in primetime? Minnesota is a team of very high highs (overtime win vs. Buffalo) and very low lows (blowout loss against Dallas). Which Vikings team are we going to see this postseason? 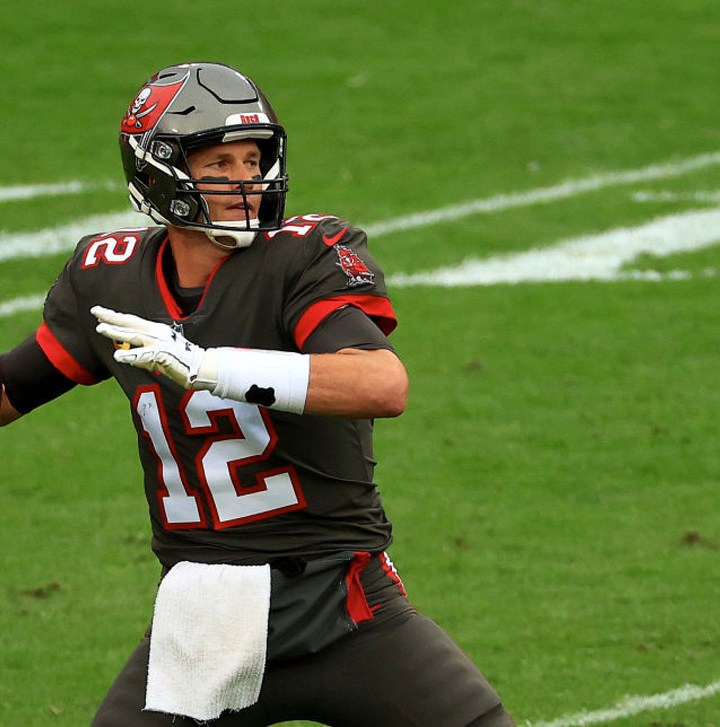 Sure, this is the weakest that Tampa Bay has been in Brady’s three years with the team. But it’s Tom Brady, and we are never willing to count the GOAT out.

Brady and Co. face off against the Cowboys this weekend, a team that #12 has never lost to in his 22-year career. Don't let Brady get hot. We've seen that story play out over and over again throughout his career. 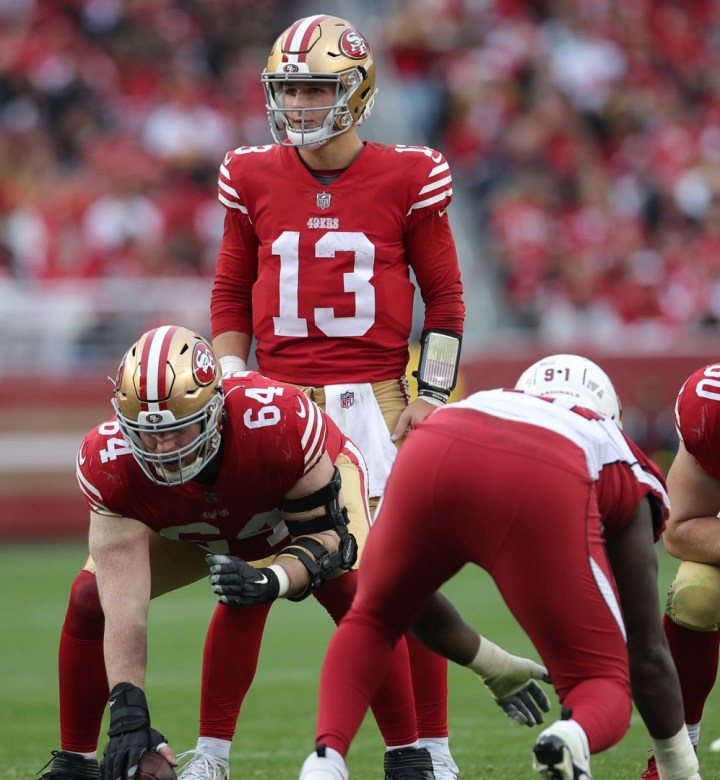 The 49ers have had no shortage of headlines this season. Brock Purdy, a.k.a. Mr. Irrelevant, took the league by storm and engineered some impressive offensive performances. He still remains undefeated as the starter, but having the best defense in football has surely helped.

Defensive Coordinator DeMeco Ryans will likely be a head coach in the NFL next year after his impressive 2022-23 campaign. If the Niners can halt Geno Smith’s production, there’s no reason why they shouldn’t move on to the divisional round. 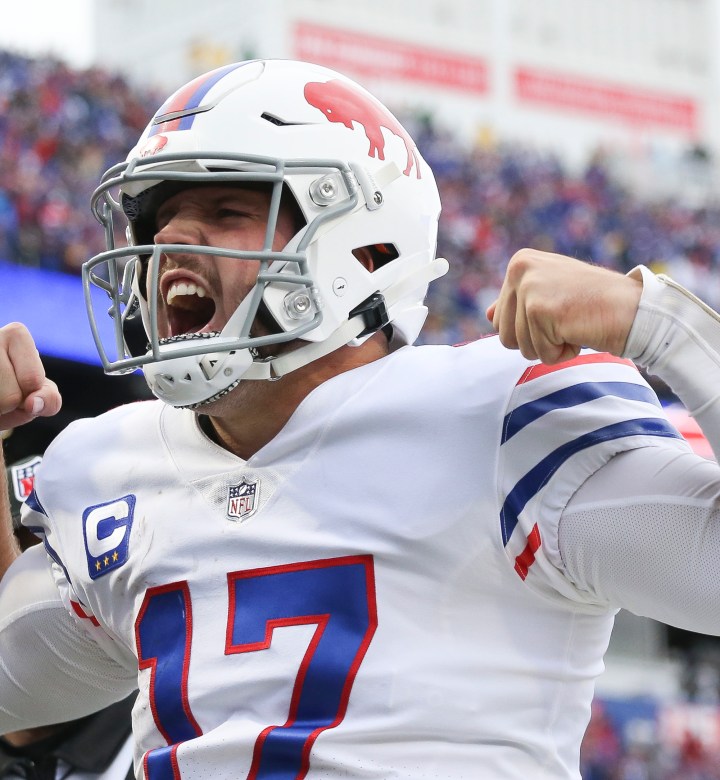 Buffalo easily could be ranked higher on this list, but we have yet to see Josh Allen climb the last hurdle and win the AFC. The Bills posted another phenomenal regular season campaign, finishing with a 13-3 record. This included an impressive Week 18 victory against New England.

We foresee this squad coasting by Miami this weekend, but they will have a tough divisional matchup on their hands against Cincy or Baltimore. The road isn’t getting easier for Bills Mafia, so we will have to see if this is finally their year. 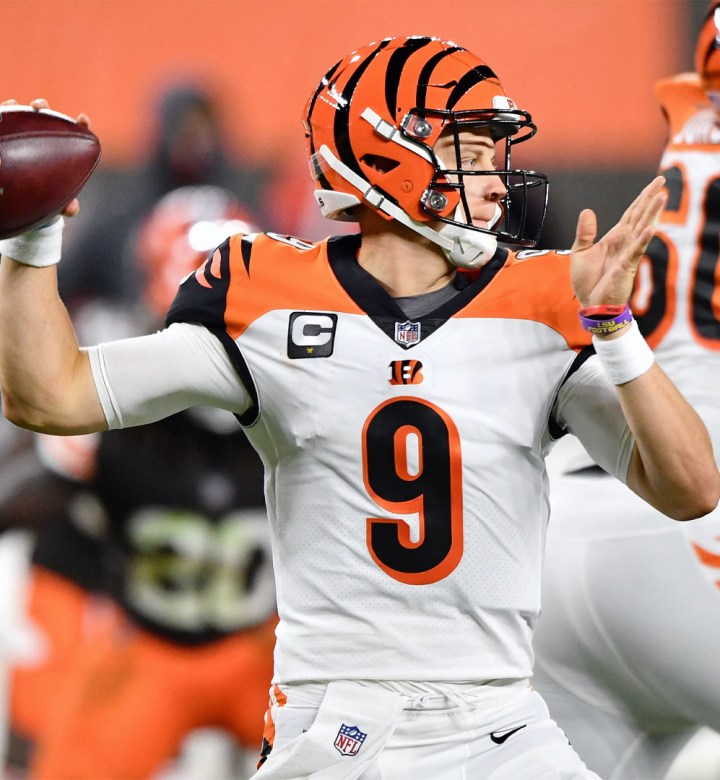 There is something Brady-esque about Joe Burrow’s game. He doesn’t have the best arm in the 2020 draft class (that would be Justin Herbert). He doesn’t scramble as well as fellow draftee Jalen Hurts. He just wins. He reads defenses, he makes plays, and he just wins.

Many speculated that Cincy’s championship window had closed after their loss in Super Bowl LVI. And yet, the high-powered offense of Burrow, Chase, Mixon and Higgins has proved once again that they are a force to be reckoned with in the AFC.

The Bengals will take on division rival Baltimore on Sunday. If Lamar Jackson does not suit up for the Ravens, we foresee a lot of “Who Dey!” chants coming out of Cincinnati.

With +850 odds on DraftKings, they are the best value on the board in my NFL playoff power rankings. 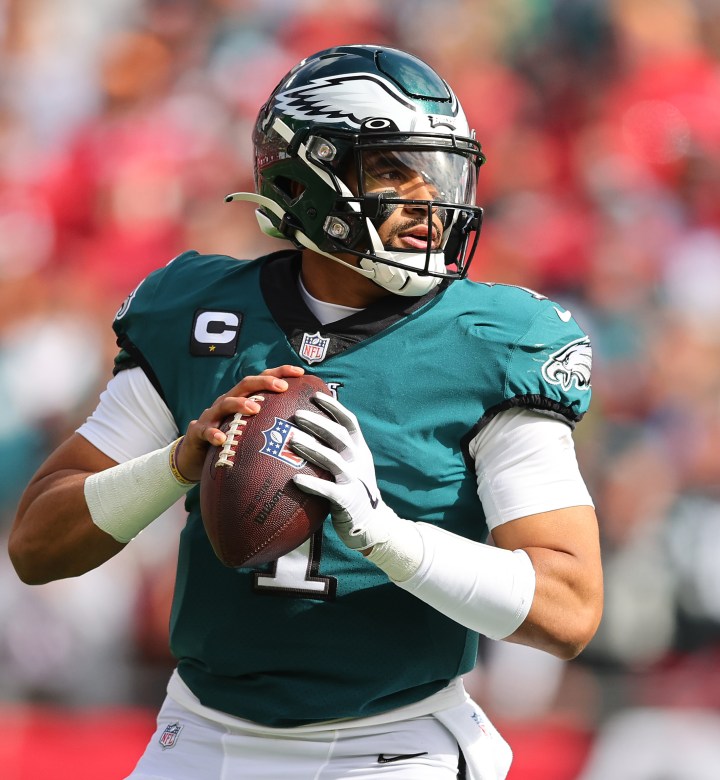 Philadelphia is another team poised to make a deep playoff run. On the defensive side of the ball, the Birds gave up only 301.5 total yards per game, which ranked second in the league. Premier play from Darius Slay and Haason Reddick has made this team razor-sharp against opposing offenses. However, it’s the breakout season from Jalen Hurts that has taken this team to the next level. Hurts has proved to be invaluable at the helm, posting a 14-1 record as the starter.
The Eagles will enjoy a first-round bye this postseason, but a matchup against Dallas or Tampa Bay will be no easy task. It will be on Hurts’ shoulders to silence the doubters and prove that he is one of the best young talents in the league. 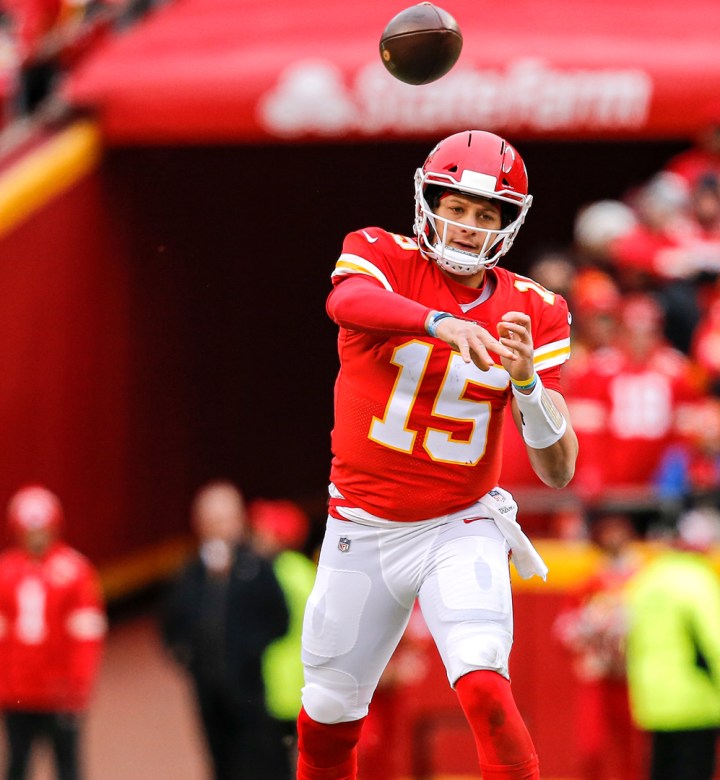 The team I'm most high on in my NFL playoff power rankings isn't exactly a stretch.

Who's Winning Super Bowl LVII? The Chiefs make football look easy. Patrick Mahomes and Co. locked up the #1 seed in the AFC with a sound Week 18 victory against the Raiders. Early in the game, Kansas City began playing what looked to be “Ring Around the Rosie” before snapping the ball. This is a team that is willing to reach deep into its bag of tricks to win a football game.

In his fifth year as the starter, Mahomes posted another MVP-level year, tossing for 5,250 yards and 41 TDs. Mahomes’ talent and creativity have made him the best quarterback in the league, but he can always count on a familiar pair of gloves in the open field. Travis Kelce, now in his 10th year, posted over 1,300 receiving yards and an uptick in targets with the absence of Tyreek Hill.

This team will put the ball in the end zone. A lot. And it’s up to everyone else on this list to scheme and outwork the Chiefs if they want a Super Bowl ring.

Five NFL Rookie Cards to Buy for the Playoffs

While many will be placing future bets and player props this weekend, we propose a much more fun alternative: sports cards. Collectibles are booming, and buying cards is a fun and tangible way to make some money. If you have a Super Bowl lock, consider picking up a nice rookie card of that team’s star player. If you bet on that team and they lose, you'll lose 100% of that money. But if you buy a card and that team loses, at least you still have the card!

Here are five cards that I could see increasing in value if their team makes a deep playoff run. 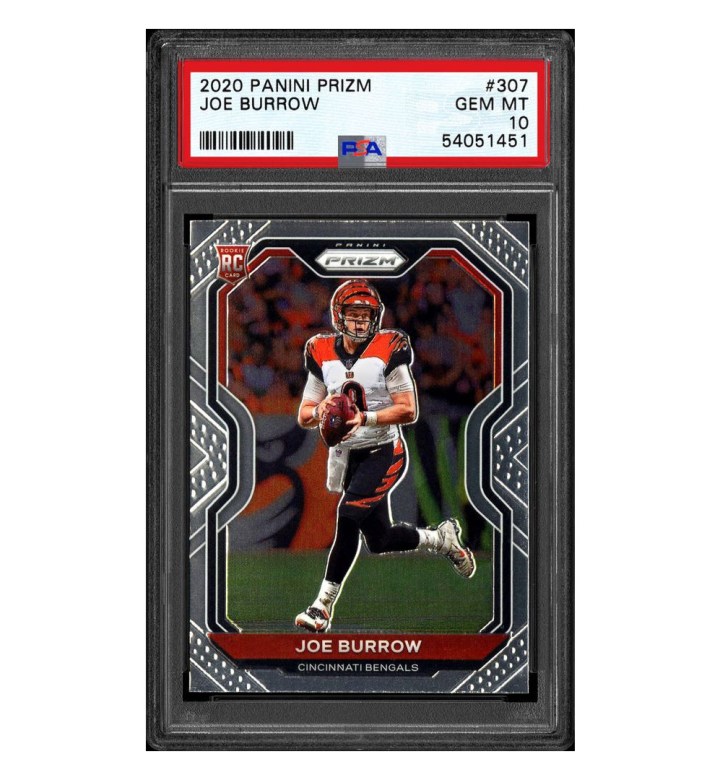 We usually advise against base cards, but Burrow’s Prizm Rookie was a $600 card during last year’s Super Bowl.  It may not ever reach that peak again, but you can definitely expect a jump in price if the Bengals can repeat their success. 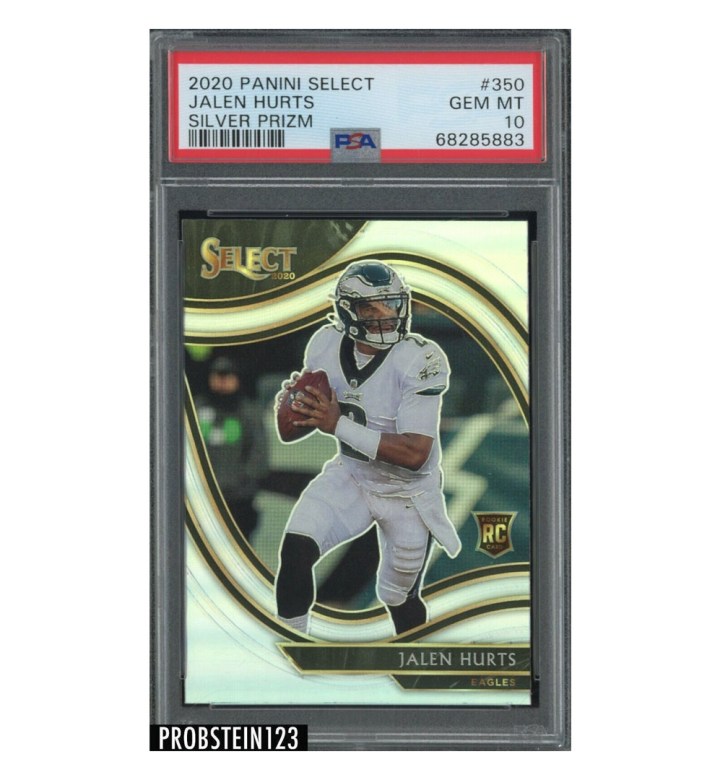 Hurts has evolved into a bonafide superstar, but many of his card prices don’t reflect that. Case in point: Joe Burrow’s Select Field Level Silver sells for around $1,000 as a PSA 10, and Justin Herbert’s trades for around $600. You can pick this one up in the $300 range, and that number will likely jump with a couple of playoff wins. 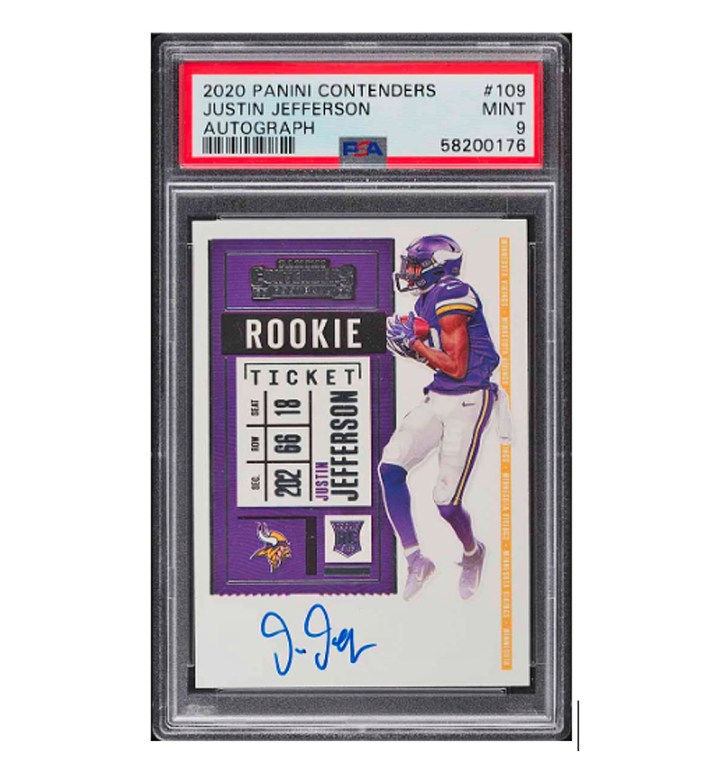 Jettas should win Offensive Player of the Year, and he may just be the best wideout in the world. He has higher-end rookie autographs in sets like Flawless and National Treasures, but you can beat the clean look of Contenders. If Jefferson keeps this production up, cards like these are going to be in high demand this postseason. 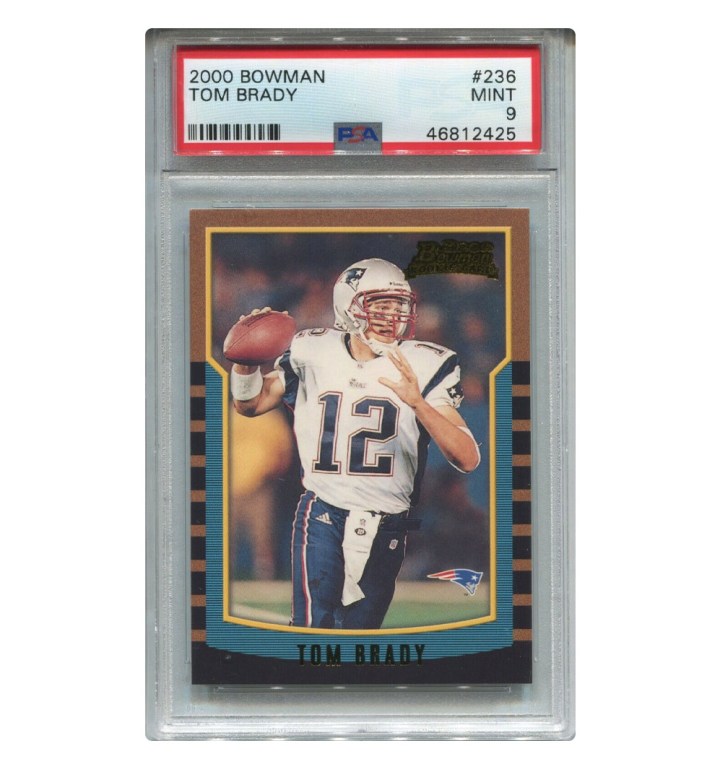 It’s an adage as old as time: Never count Tom Brady out. The 45-year-old still has some gas in the tank, and you can never go wrong picking up one of his rookie cards. This Bowman PSA 9 trades around $1,300 currently, but it was a $4,000 card this time last year. 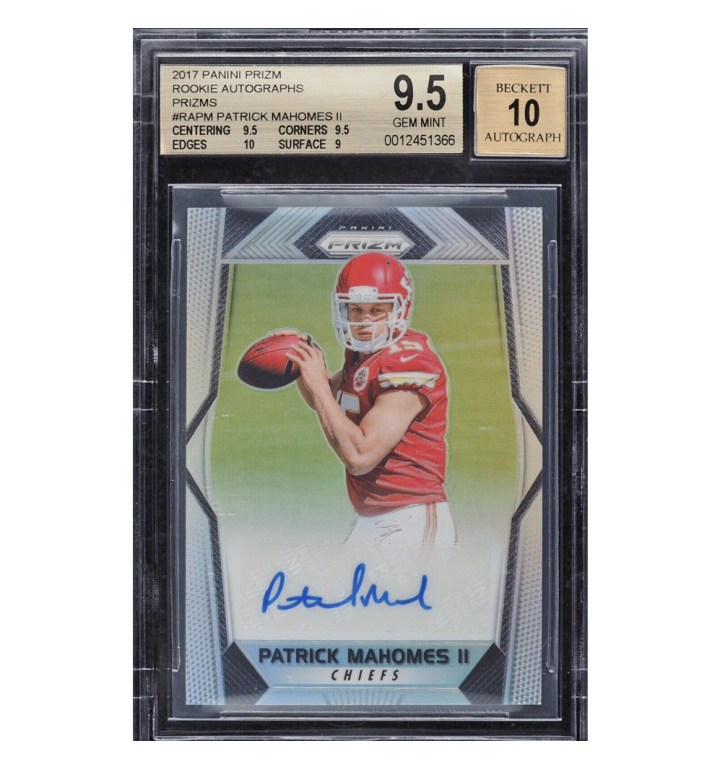 Mahomes rookies have been a solid investment all season, and he remains the #1 quarterback in the league on most lists. If you’re all in on the Chiefs this year, this could prove to be a worthy investment a month from now.

How do your NFL playoff power rankings compare to ours? Are you buying any cards ahead of Wild Card weekend? Shoot us a message on Twitter @137pm and let us know!