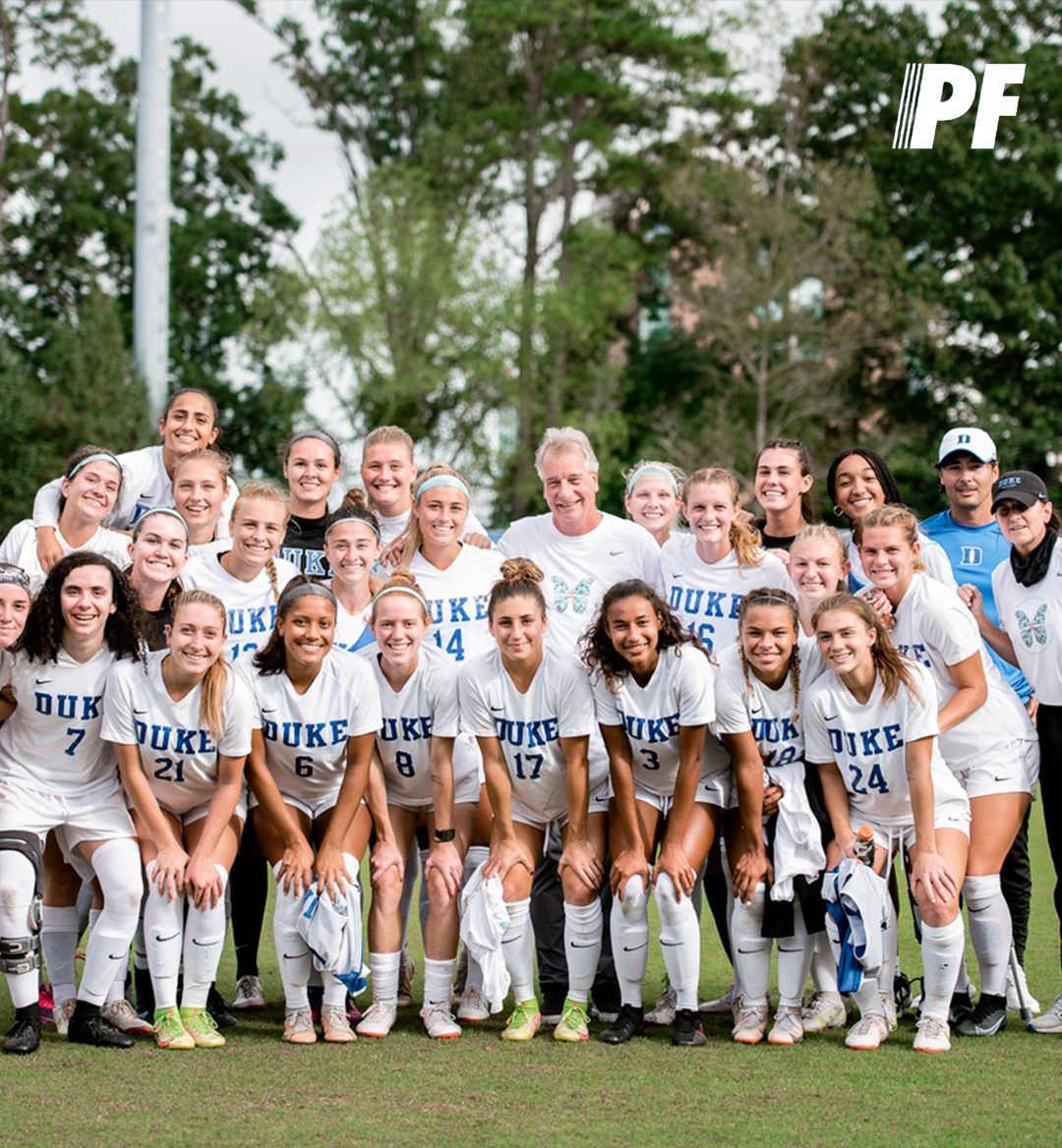 The best college soccer teams in the nation are preparing for the postseason and with that comes an immense amount of pressure for the country’s top players and coaches.

Traditional powerhouses on both the men’s and women’s side of the sport are in the mix once again this season with Duke and Virginia Tech ranked in the top 10.

Meanwhile, unexpected sides like New Hampshire’s men’s program find themselves in new territory with their 2021 success.

In fact, the Wildcats under head coach Marc Hubbard are enjoying success that the school has never previously experienced.

Before Hubbard’s appointment in 2015, New Hampshire had only reached the NCAA Tournament once in school history. Since taking over, the Wildcats are on the verge of reaching the tournament for the fourth time in Hubbard’s tenure.

Today, ONE37pm takes a look at the 20 best college soccer teams in the United States. 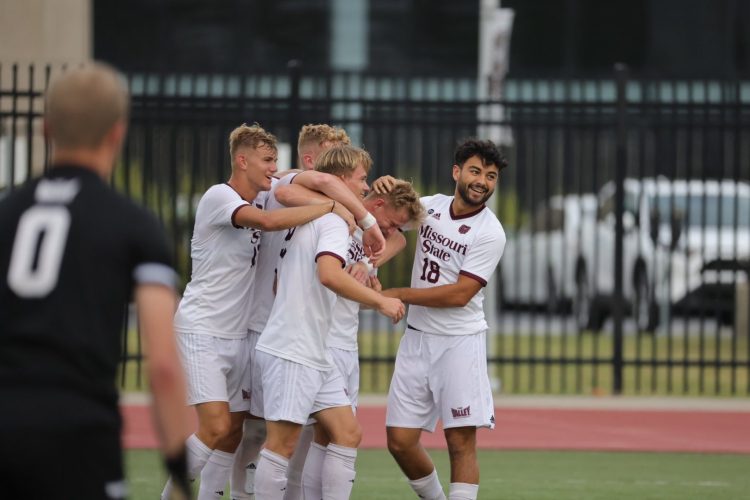 The Missouri State Bears enter the final month of the season with just one blemish against conference foe Tulsa.

The Bears are still in a very good position with eight straight wins following their sole loss of the 2021 campaign. 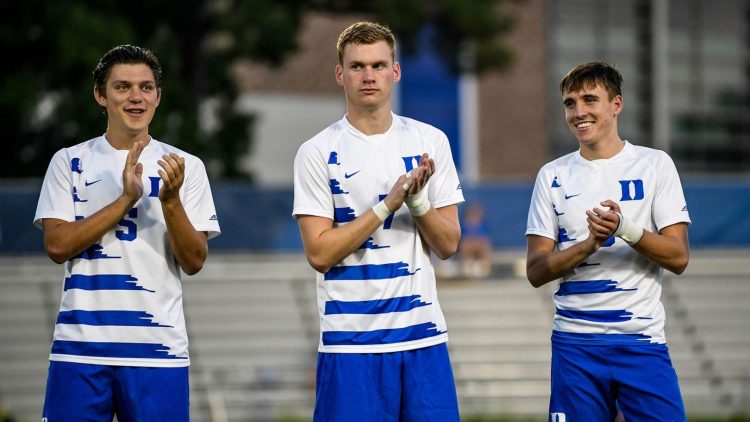 The Duke Blue Devils have put together yet another impressive season for a team that is used to the national spotlight.

Wins over Virginia Tech and North Carolina headline the Blue Devils’ success so far, but Duke still has a chance to pad its resume against Clemson and Virginia.

Duke’s Thorleifur Ulfarsson has nine goals this season, which is tied for eighth in the country. 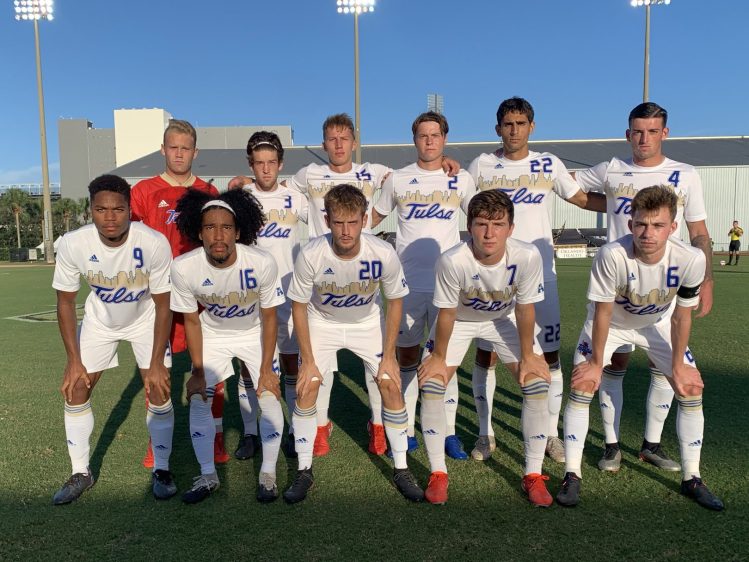 The Tulsa Golden Hurricane are led by Alex Meinhard and Malik Henry-Scott, with both players scoring seven goals each this season.

Tulsa boasts a big win over Missouri State, as well as Big Ten side Michigan State. 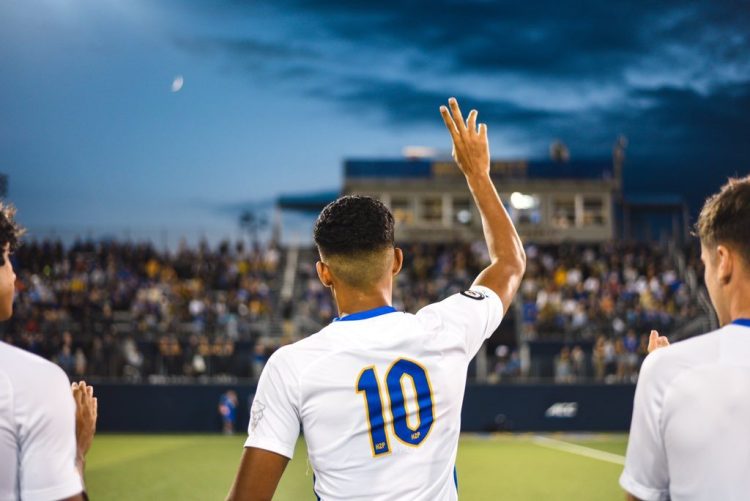 The Pittsburgh Panthers may have one of the best resumes in college soccer this season, boasting wins over Duke, North Carolina and Clemson -- each of whom were ranked top 5 when the Panthers met them.

Pittsburgh has only allowed 12 goals in 11 matches so far, which is one of the reasons why the team has remained so competitive. 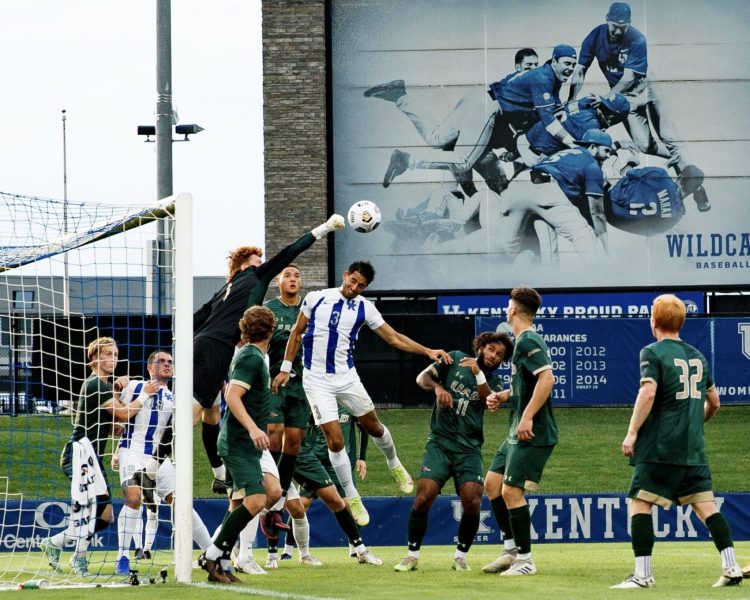 The Kentucky Wildcats aren’t traditionally known for their soccer program, but head coach Johan Cedergren is proving that they need to be taken seriously.

Cedergren is in his 10th season with the program and became the fastest coach in school history to record 100 wins in April 2021.

The Wildcats also have valuable draws against Florida International, Marshall and Coastal Carolins, keeping the team unbeaten through 10 matches. 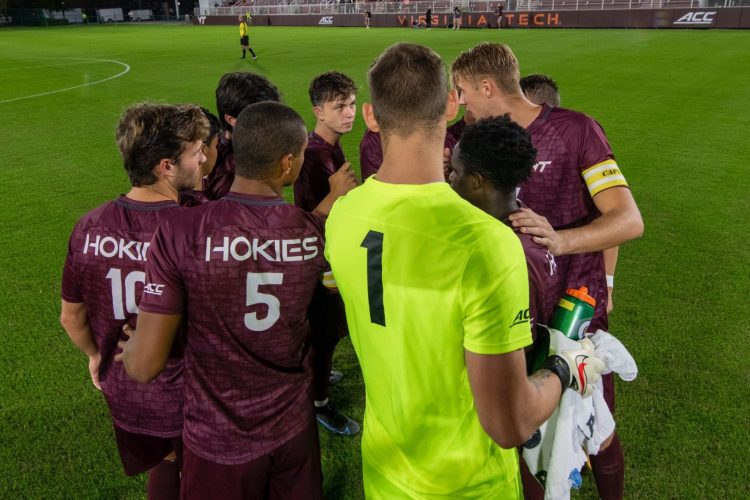 The Virginia Tech Hokies have a dynamic goal scorer and playmaker with Jacob Labovitz, who has posted seven goals and three assists this season.

Wins over Marshall and Louisville have been huge for the Hokies this season and should give the ACC team confidence heading into the postseason. 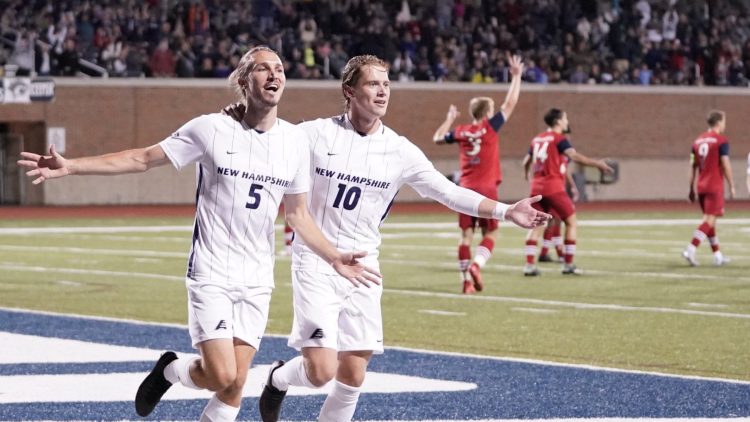 The New Hampshire Wildcats are still unbeaten through 13 matches, and the America East team could be finding itself in the national title picture with a strong finish to the season.

The Wildcats have seen Tola Showunmi take on a leadership role in attack with his seven goals and two assists this season, while goalkeeper Jassem Koleilat has been still in net allowing just six goals. 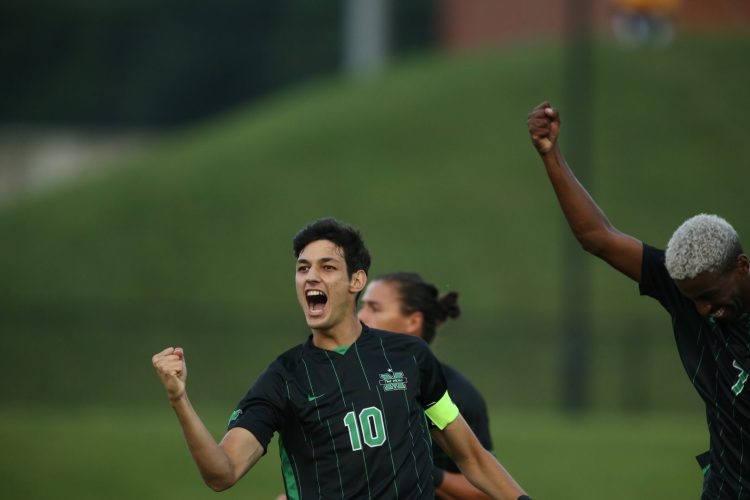 The Marshall Thundering Herd have boasted one of the toughest schedules in all of college soccer this season, and they’re being rewarded for the difficulty.

To this point, Marshall has faced five ranked opponents and only lost one match, a narrow 3-2 defeat against Virginia Tech.

The Thundering Herd are led by Pedro Dolabella, the squad’s creative midfielder who has seven goals and five assists this campaign. 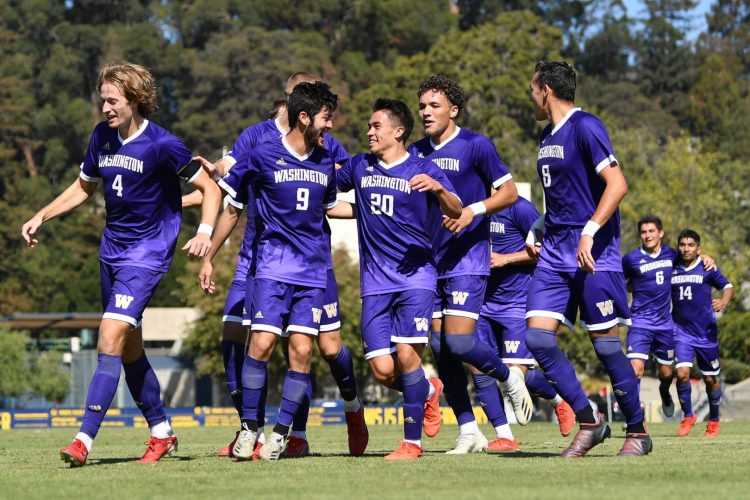 The Washington Huskies come into the final weeks of the 2021 season as one of the few remaining unbeaten sides.

The team is led by Dylan Teves up front with his four goals and five assists, but the Huskies have relied on their whole squad for contributions. 11 players have recorded at least one goal for Washington.

This season, the Huskies have allowed just five goals while outscoring opponents by 22 goals.

The Georgetown Hoyas suffered a surprising loss to Providence, but the Big East side still are firmly in the mix for a national title.

The Hoyas are averaging exactly two goals per game, while allowing 0.7 goals on the defensive end. Head coach Brian Wiese has been in charge since 2006, when he was given his first full-time collegiate head coaching job.

Under Wiese, Georgetown won the 2019 national championship and the Hoyas will look to replicate that feat this season. 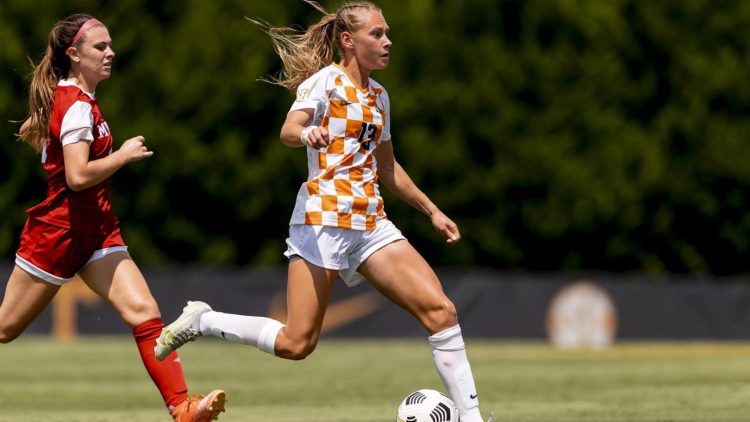 The Tennessee Volunteers have been on a hot streak this season with five straight wins after their lone defeat against the Arkansas Razorbacks in September. Tennessee is averaging over 2.7 goals per game compared to their opponents’ 0.5, which is quite impressive.

Meanwhile, Taylor Huff, Claudia Dipasupil and Jaida Thomas are starring for the Volunteers in attack, having combined for 19 goals this season, while adding 12 assists.

Head coach Brian Pensky is now in his ninth season with the team and has done a tremendous job turning the program around after going 8-6-1 in 2020/21. 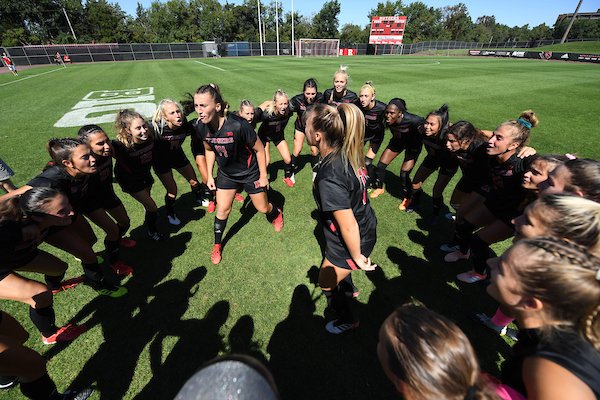 The Rutgers Scarlet Knights have already secured two ranked wins this season over Penn State and Michigan, and head coach Mike O’Neill has his team prepared to make a deep run in the NCAA Tournament.

Now in his eighth season, Rutgers are the clear favorites in the Big Ten after outsourcing opponents 41 to 10 this year.

In fact, goalkeeper Meagan McClelland has allowed less than a goal per goal for the Scarlet Knights during her 13 starts this season. 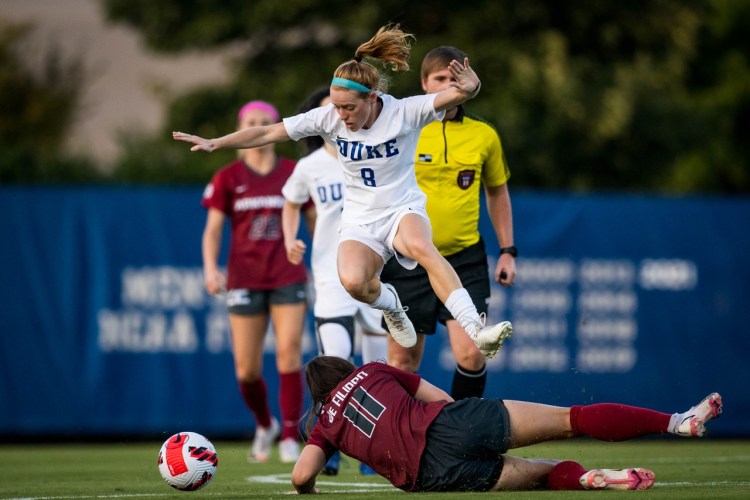 The Duke Blue Devils always seem to be in the hunt for a national title and this season is no different.

Despite their 1-0 loss to Virginia, Duke is firmly in ACC contention and the team certainly has the chance to make a big impression when they face Florida State on Oct. 24.

Michelle Cooper’s seven goals and three assists have paced the Blue Devils this season, while goalkeeper Ruthie Adams has allowed just seven goals in 12 appearances for the team. 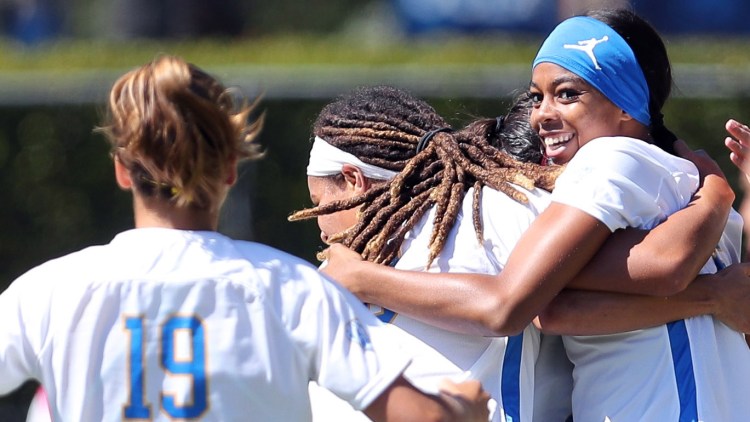 UCLA remains unbeaten through the team’s first 13 matches, leaving little doubt that the Bruins deserve to be ranked in the top 10.

Mia Fishel leads the squad with nine goals this season, while teammate Madelyn Desiano has racked up eight assists so far for the Bruins.

UCLA will face significant rival USC in the coming weeks in a match that could decide the winner of the Pac 12. 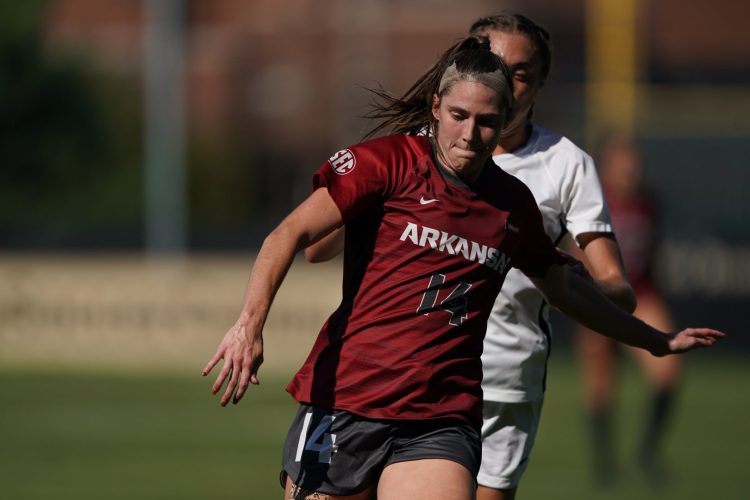 The Arkansas Razorbacks have rebounded well after back-to-back losses to Duke and North Carolina at the start of the season.

During their 11-game winning streak, Arkansas has only allowed five goals in total. Meanwhile, Anna Podajil, Parker Goins and Taylor Malham have combined for 22 goals this season for the Razorbacks, making a lethal attacking trio. 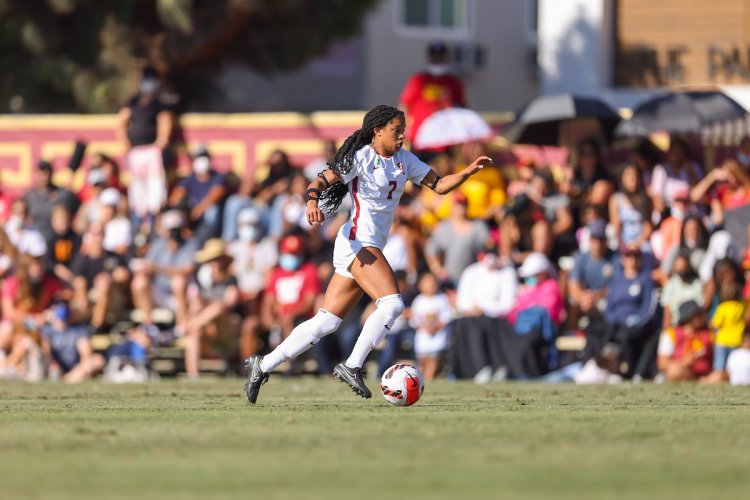 The USC Trojans are currently enjoying a 10-match undefeated streak after losing their first two games of the season, and their attack is clicking very well.

This season, the Trojans have scored four or more goals on six different occasions, including a 7-0 win over Utah.

USC still has a massive meeting with UCLA at the end of the regular season, which will surely have major implications for the postseason. 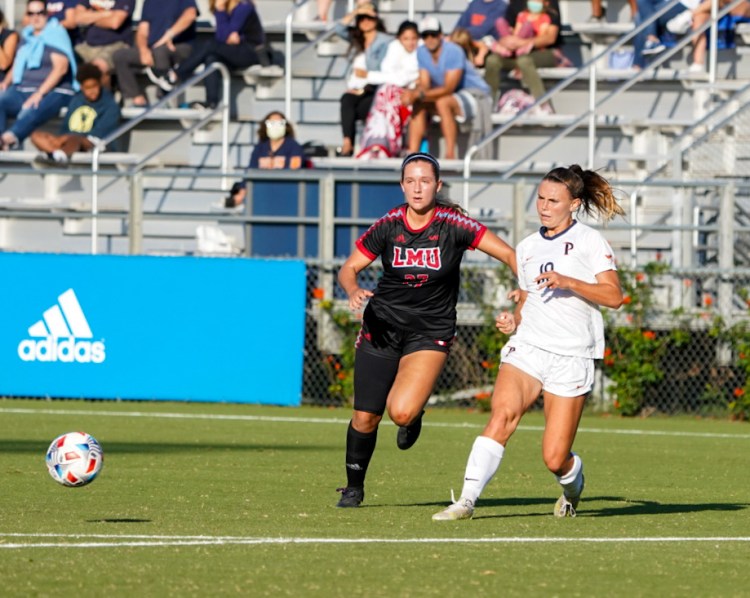 Pepperdine has been simply unstoppable for much of the 2021 season, and the key to their success has been their defense.

Through 13 matches, the team has only conceded five goals while posting nine shutouts. That includes the squad’s season-opening win over USC - who also resides in the top 10.

Pepperdine has five players with four or more goals this season, including the team’s top goalscorers in Tori Waldeck and Joelle Anderson, who each have six finishes. 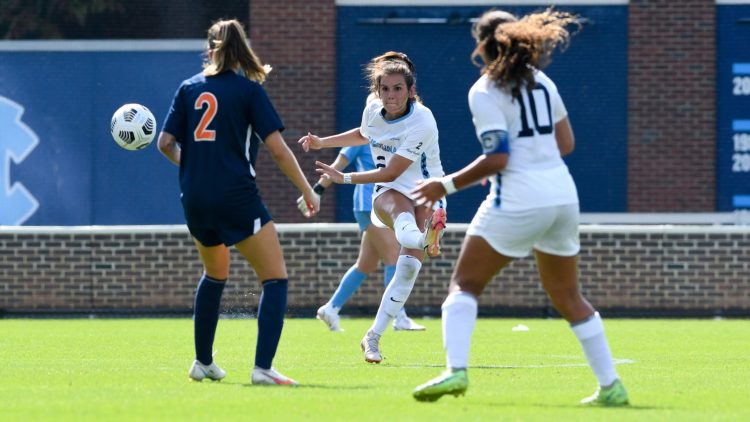 The North Carolina Tar Heels are once again near the top of the rankings after another successful season under head coach Anson Dorrance, the former U.S. Women’s National team manager.

The Tar Heels are unbeaten in five straight matches and have been led this season by Emily Murphy and Emily Colton with their combined nine goals.

Meanwhile, the stout North Carolina back line hasn’t conceded more than one goal in a match all season. 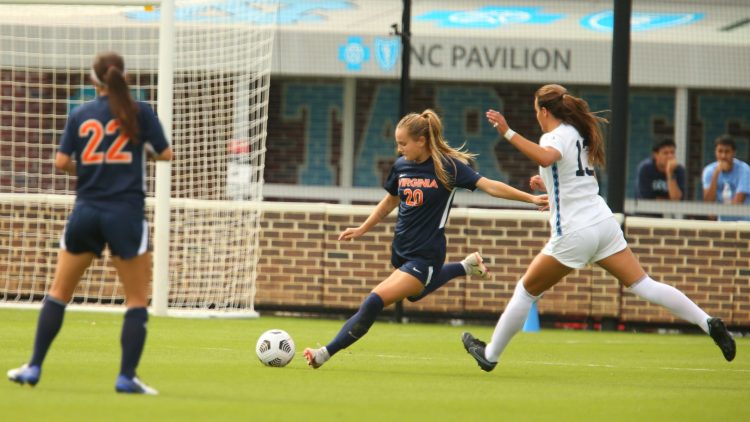 The Virginia Cavaliers have stood up to almost every test this season, and their fate may be decided by their date with No. 1-ranked squad Florida State.

The Cavaliers have been led by top goal scorer Diana Ordonez, who has 10 goals this season for Virginia. Meanwhile, Lia Godfrey has posted an incredible nine assists and helps lead the Cavaliers attack. 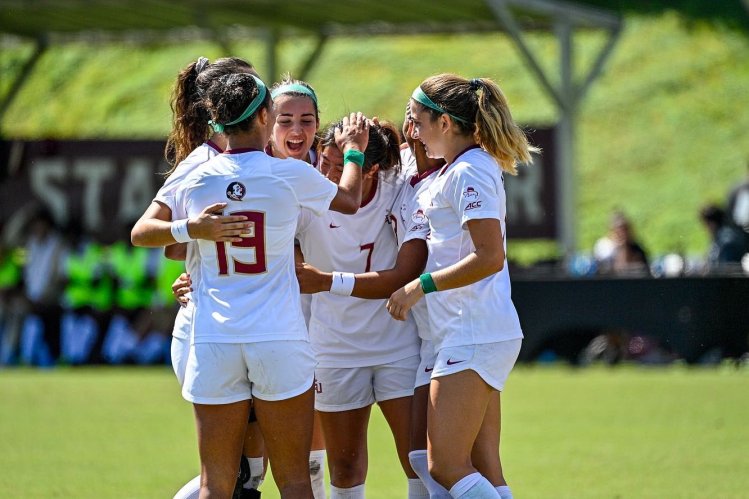 The Florida State Seminoles sit atop the rankings with their undefeated record through 13 matches and the southern school still has massive fixtures remaining against Duke, North Carolina and Virginia.

The Seminoles have had 17 different goal scorers this season, with Beata Olsson leading the charge with eight goals to her name.

Head coach Mark Krikorian took over at Florida State back in 2005 and has taken his Seminoles team to five separate championship matches during his tenure.