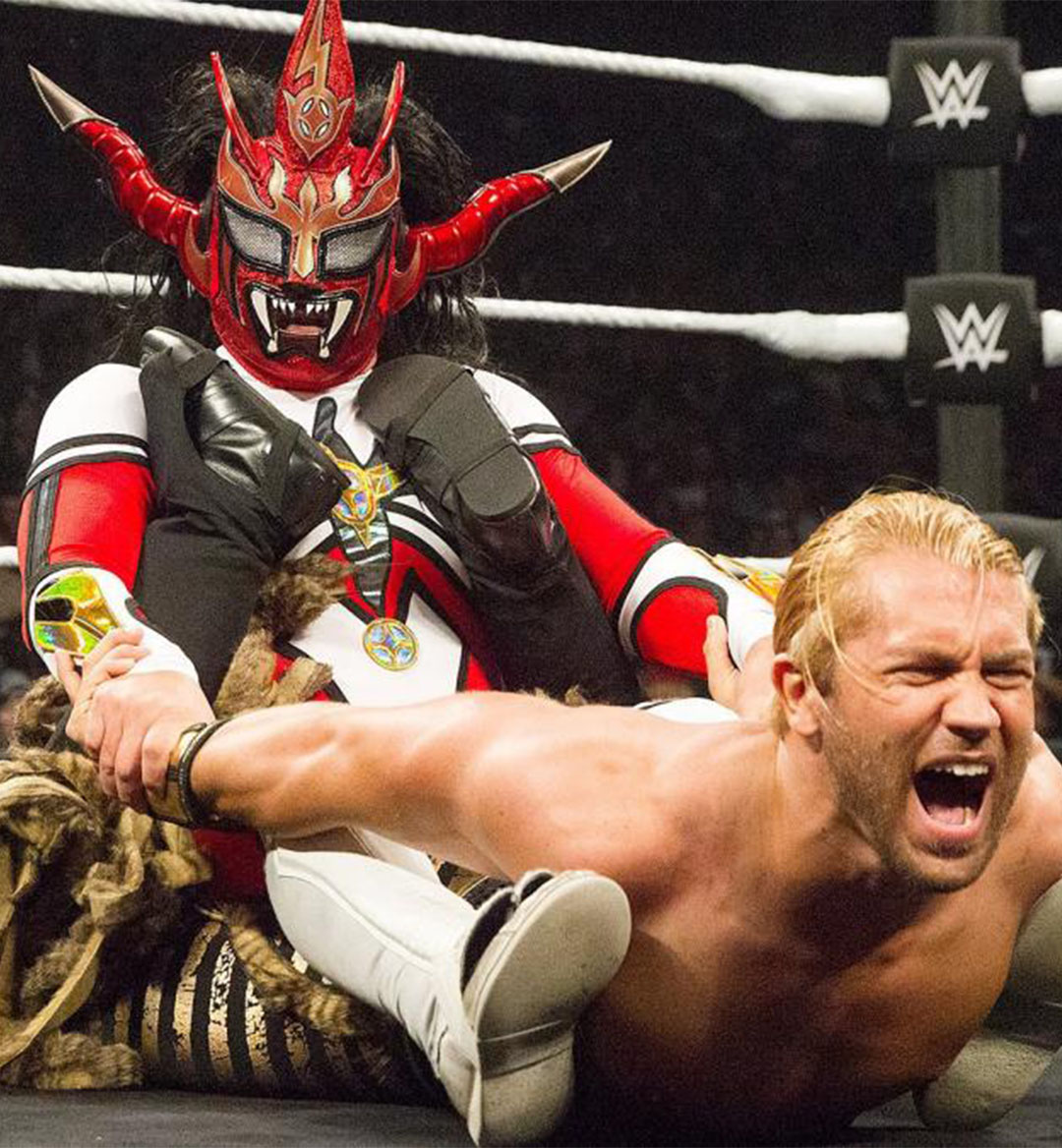 At some point in time, New Japan Pro Wrestling’s Jr. Heavyweight legend Jushin “Thunder” Liger once locked up with WWE’s Jeff Hardy (when he was still a part of Impact Wrestling) back in 2016. Plus we once witnessed Liger lock horns with Tyler Breeze in a special NJPW vs. NXT matchup back at the first-ever NXT TakeOver: Brooklyn event.

Those two matches paint an intriguing picture of a world where WWE engages in a more fruitful relationship with NJPW. Based on a recent report that’s begun to make the rounds, that dream scenario may just become a reality. Talks are said to have gone down between both wrestling entities in hopes of a talent exchange program that could benefit them in the long run. Since Daniel Bryan is a free agent these days, it makes all the sense in the world for WWE to do everything in their power to keep him by allowing him to work NJPW dates while still signed to them. It would be quite a mind-blowing sight to see Bryan walk into the Tokyo Dome to compete at NJPW’s annual WrestleKingdom mega card.

Thanks to that hot rumor, I decided to get into my fantasy matchup bag to come up with 10 incredible WWE vs. NJPW dream matches that I’d love to see. An entire PPV that features these 10 matches would most definitely be ranked among the greatest wrestling shows of all time. And yes, it would probably usurp WrestleMania X-Seven for the #1 spot.

The babyface element from both men would make it hard to choose who to root for, that’s for sure. Would Cena be able to fight through the pain delivered by consecutive High Fly Flow’s? And would Tanahashi be able to survive more than one Attitude Adjustment? No one truly knows...

This is the type of dream match that presents another unique style clash. Cesaro is an impressive powerhouse that has the scary speed of a cruiserweight backing him up, while Kazuchika Okada employs a methodical approach to breaking down his opponent. This match would probably start off slow, then gradually build into an epic encounter full of impactful maneuvers being delivered by both competitors.

Cesaro’s freakish strength would definitely wow the crowd if this took place in Japan and I’m sure Okada’s charisma & flashy signature moves would move the crowd if this match went down in the States. This competitive contest would definitely get a pop out of me since I’m sure it would be filled with deadlift suplexes, beautiful dropkicks, nasty uppercuts, and everything else both men have in their arsenal.

You can already imagine the multitude of stiff shots that would be delivered during this meeting between these beefy badasses. Roman Reigns and Shingo Takagi house a whole lot of power within their thick frames, which means fans would be treated to a match full of jaw-dropping stalemates.

You can just imagine just how hard it would be for both men to take each other down with their respective usage of clotheslines, elbow shots, and so much more. This war would definitely go the distance and see both men trying to stake their claim as the most powerful representative of their respective companies. So which move gets the W here - Reigns’ Spear of Takagi’s Made in Japan?

It’s so hard to believe that the only time Daniel Bryan and Kota Ibushi came to blows was during a tag team match (check out the evidence posted above). If Daniel Bryan got the OK to work for NJPW on WWE’s behalf, I’d be so down to see this version of the “American Dragon” come to blows with today’s refined rendition of Kota Ibushi.

This match would most certainly feature plenty of stiff kicks, slick submission exchanges, neck-breaking suplexes, and a whole lot of top-rope maneuvers to boot. Bryan and Ibushi’s moveset is jam-packed with a ton of match-ending moves, so you’d know it’d be exciting to watch them dish out the sort of moves we haven’t seen from them in ages. Bryan would totally break out the Cattle Mutilation for this one!

5. The Usos vs. Guerrillas of Destiny

The Uso Penitentiary seems like it would be the perfect place for the Guerrillas of Destiny to pay a visit. Jimmy and Jey Uso have morphed into one of the finest tag teams on the scene today and the same can be said about Tama Tonga and Tanga Loa. Samoan wrestlers always exceed under pressure and I’m sure we’d get to see that familial trait on display here.

The back and forth exchanges between these two teams would be off the charts, plus there would be a whole lot of mid-match trash talk to bask in. This one’s so hard to call - all I know is that this match would be pure tag team gold. Just like it’s tough to decide who would win this match, it’s also hard to determine which team has the better theme song.

Here’s another instance of two big boys that would make for the perfect match. Sheamus and Tomohiro Ishii are two of the more underrated members of their respective rosters - on more than one occasion, they’ve proven to be reliable when it comes to producing a quality matchup that looks as real as it gets.

It’s hard to imagine a situation where one of these men finally succumbs to the other’s offense, but there ultimately has to be a winner. This powerman contest would certainly make everyone watching it wince in pain and roar with excitement all at the same time. This clash of the titans would leave both men battered, bruised, and filled with a newfound respect for the other man.

So I’m sure this match would be quite the treat to watch unfold. But I’m putting this dream meeting here because I’d love to see the opening moments between these two unfold. Riddle’s probably going to do everything in his power to make his “too cool for school” opponent crack a smile, while Tetsuya Naito would most likely deny every one of his happy-go-lucky foe’s attempts at being friendly.

This match would be equal parts hilarious and super competitive. So who would you place all your bets on - Riddle’s MMA expertise or Naito’s cunningness? All I know is that both men would probably become best buddies once this match comes to an end. The most epic fist bump of all time would take place after this meeting of two of the coolest wrestlers on today’s scene.

8. Seth Rollins vs. Will Ospreay

Do you guys remember when Seth Rollins went on a Twitter tirade that caught the attention of Will Ospreay? Seth’s championing of his fellow WWE peers put him in the crosshairs of “The Aerial Assassin” and ended up kicking up a firestorm of back and forth tweets that got superheated. Seth eventually apologized for his tweet about comparing bank accounts, which is commendable.

But forget all that - I want to see all that Twitter tough talk comes to life in the ring. Both of these guys are considered two of the very best modern-day wrestlers and I‘m sure they’d work extremely well together. Give this one 20+ minutes and you’re guaranteed to get a Match of the Year candidate out of it. This battle of the high-flying daredevils would definitely steal the show!

You gotta feel for Chad Gable - he’s proven himself to be an excellent in-ring technician, but he’s been given nothing but lame-duck tag teams and a horrible gimmick to work with all the while. I’m sure the amateur wrestling pro in Gable would work wonders outside the confines of WWE if given the chance.

Pitting him against the Bullet Club’s “Bone Soldier” would create a scenario in which Jr. Heavyweight magic would be created. Ishimori has gotten plenty of opportunities to showcase his talents and has knocked it out of the park on every occasion. This match would prove to be a true coming-out party for Gable that would showcase his full potential for the world to see.

This one is clearly just for s***s and giggles. R-Truth’s run as the 24/7 Champion produces the same type of slapstick humor that Toru Yano’s King of Pro Wrestling reign has given fans thus far. I’m sure both men would go out of their way to employ some outlandish tactics in a bid to eke out a victory.

I’m talking about both guys hiding underneath the ring & re-emerging for a sneak attack, running through the crowd, using the corner pads to engage in a mid-match pillow fight, using tape to wrap up each other’s hands & feet, etc. The battle of the comedy kings of wrestling is something I need to see at some point. And once it’s done, Truth and Yano would make for quite the makeshift tag team.