Fashion On Film: The Impact of 1940s Style in Hollywood 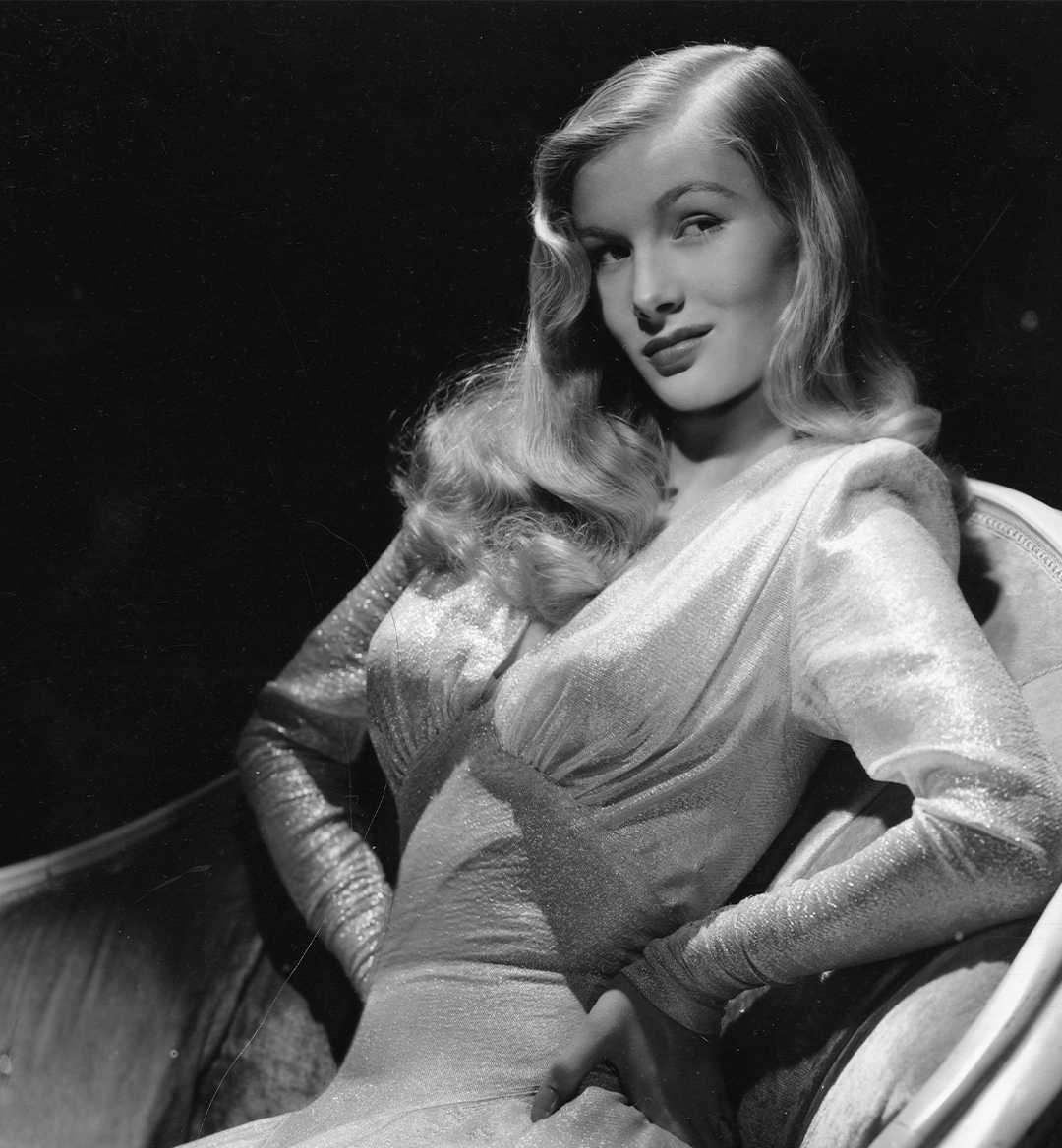 So we’ve done the 1920s and the 1930s, which means the next installment of our Fashion On Film Archives is the fabulous 1940s. 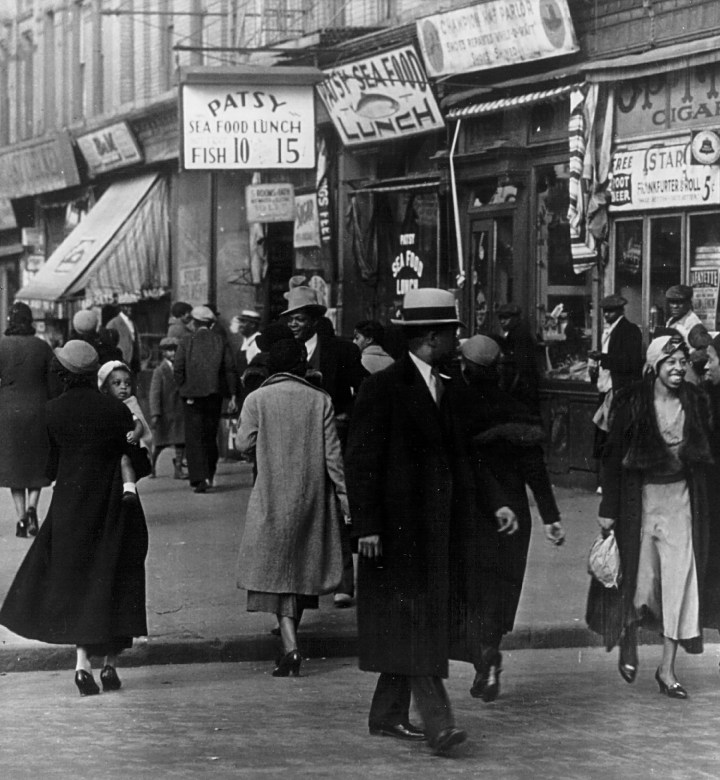 Now let’s rewind for a second here. The 1920s had just followed the Flu Pandemic of the 1910s, so people were getting dressed in their Sunday best almost everyday to party and have a good ole time, but the decade concluded with the start of The Great Depression.

While The Great Depression didn’t stop folks from enjoying entertainment, to say life changed drastically would be an understatement. And as we all unfortunately know from recent events that have mirrored those of the 1910s, 20s, and 30s, when unforeseen catastrophic events happen that affect your life and livelihood, well, you have to scale back and work with what you got to make the best of the situation. 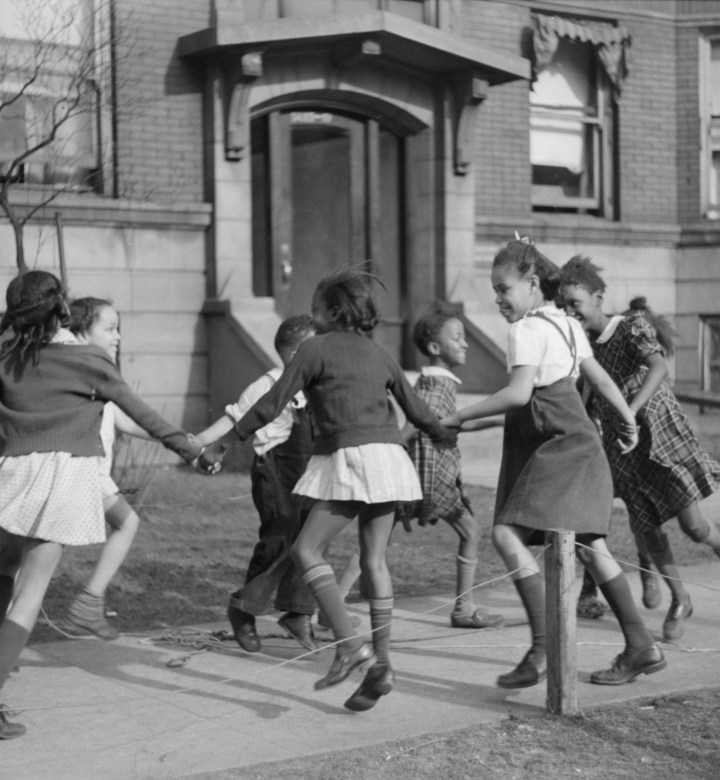 But at some point, things do begin to take a turn for the better, and that’s where we’re at right now with the 1940s, with the exception of World War II of course (when it rains it pours). 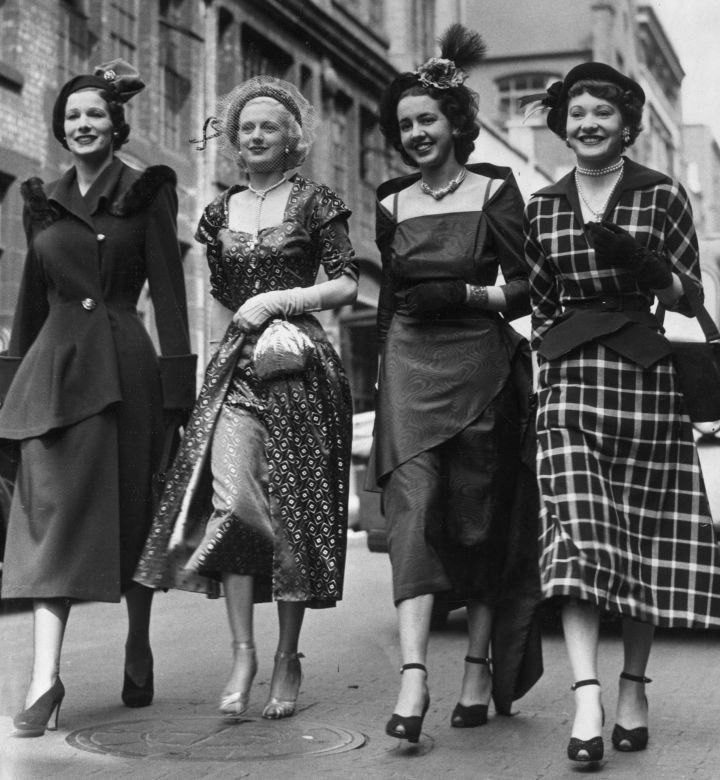 As far as 1940s fashion goes, we’ll cause this a “Renaissance,” or a rebirth if you will. Many of the luxury houses that had been forced to shut down over the course of the previous decade for obvious reasons reopened, and new fashion houses began to emerge. Whereas the 1930s focused on the bias cut, the 1940s began to take that concept and expand upon with a focus on the hourglass “coke bottle” figure. 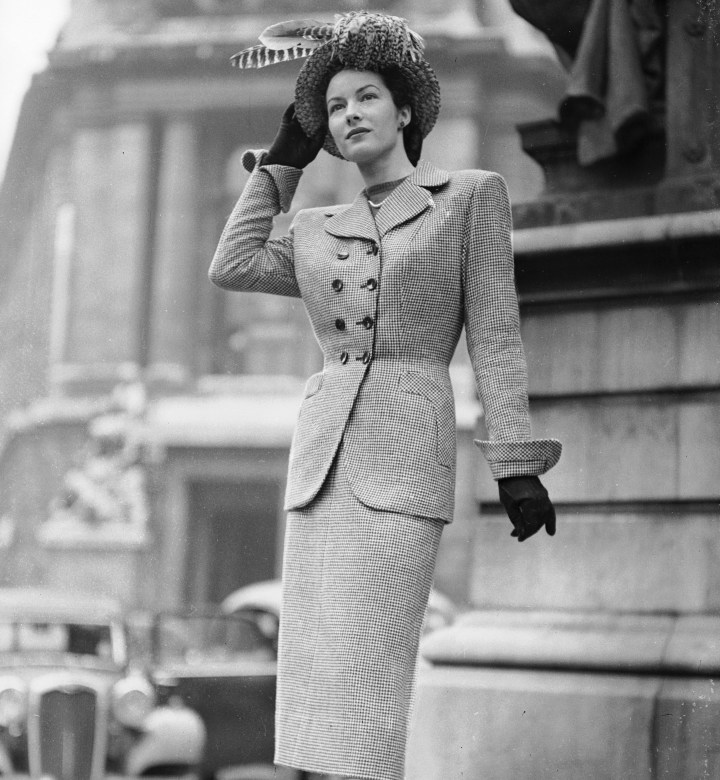 Some the trends we saw where: A-line skirts, square shoulder jackets, and high waisted pants and tops that was made in acceptable for women in part by Katharine Hepburn (remember we told you to keep an eye for her at the end of the 1930s article), who refused to conform to standards of what a woman “should look and dress like”

Blazer dresses and skirts were also another one two punch combo that was super popular, along with wedge toe sandals, and different styles of hats, gloves, etc. In short, women were starting to wear more form-flattering clothes, and show off their bodies just a little bit more (the bikini was introduced in the 1940s). 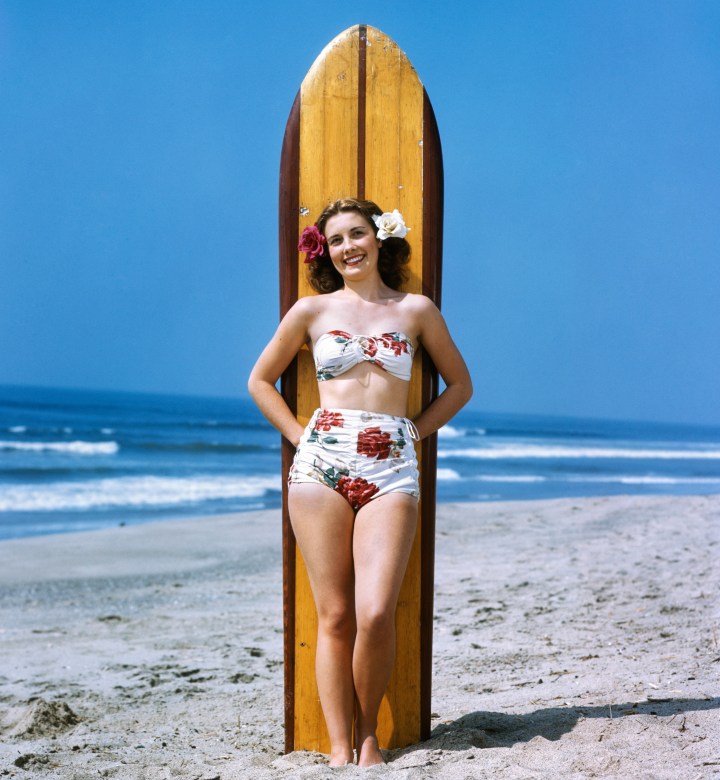 Making our way over to the men's side of things. Not much changed in terms of how the fellas dressed. Hats remained a common theme be it the fedora or homburg, trench coats were even more in style than before, and military-themed clothing was again popular for obvious reasons due to the circumstances at that time. 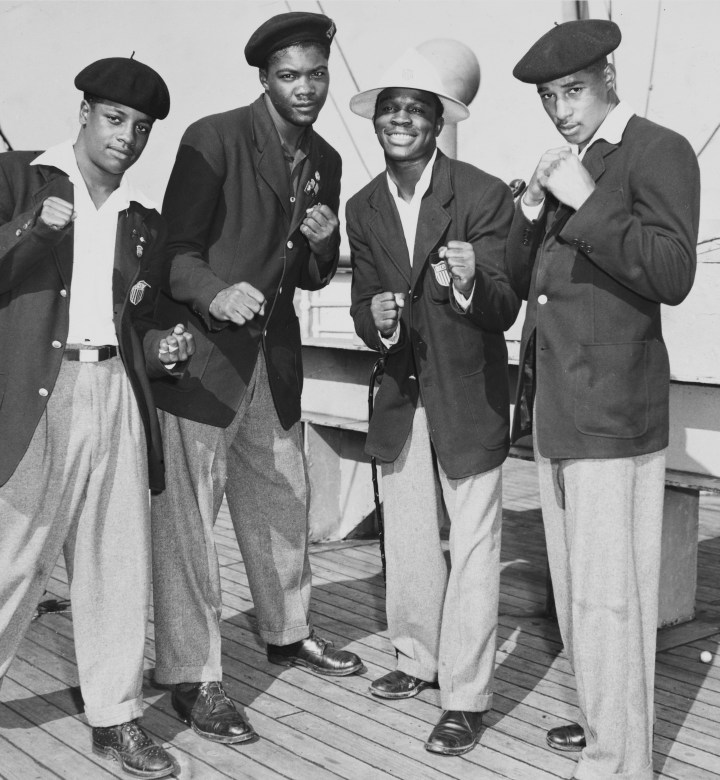 However, the biggest change in men’s fashion was, believe it or not, comfort. After years and years of wearing suits pretty much 24/7, the guys wanted to wear outfits that were more comfortable when the occasion called for it. 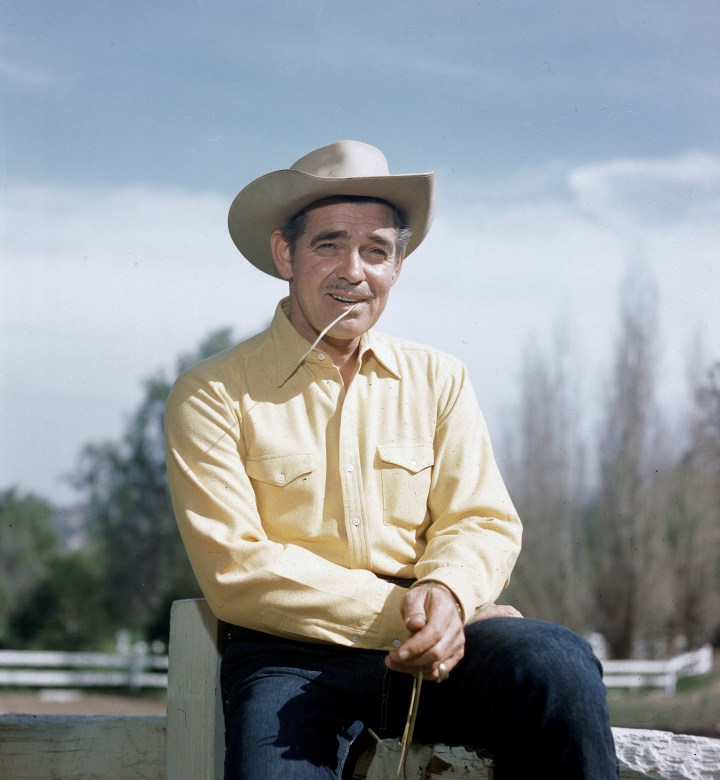 This meant the start of button down shirts, and looser pants and jackets. 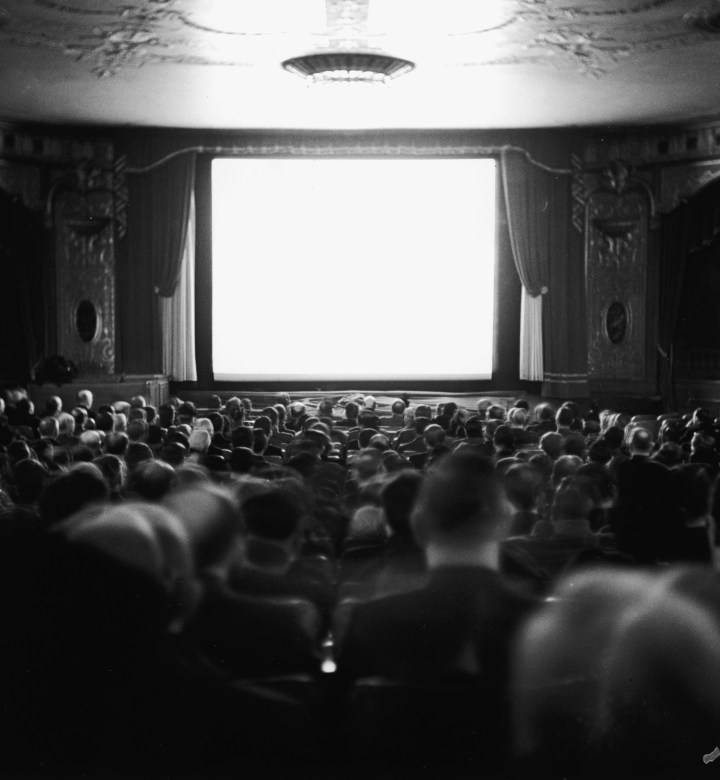 So now we’re in the 40s. The silent era is pretty much no more, and there are major technological advances being made in the film world to provide even more entertainment value to audiences. World War II meant that there were a lot of military/patriotic films being made, which was a departure from the 1930s where people wanted absolutely no reminder of The Great Depression whatsoever, but the goal was still to provide escapism. 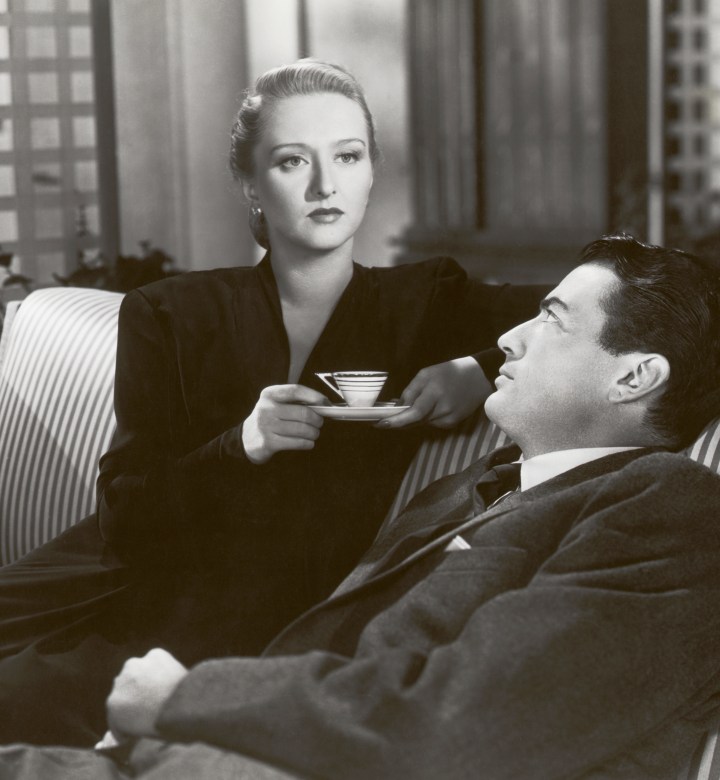 Hollywood was slowly becoming even more dominant with the rise of Katharine Hepburn, Lauren Bacall, Gene Tierney, and Rita Hayworth to name a few on the women’s side, and Humphrey Bogart, Frank Sinatra, and Vincent Price on the men’s side. We would even see the introduction of a very young Elizabeth Taylor, who we would become much more familiar with in the decades to come. Many of Hollywood’s most classic films would be released during the 1940s, and like the previous two articles in this series, we have a list of seven to get you started.

Films To Get You Started

Starring the real life love birds Katharine Hepburn and Spencer Tracy, Woman of the Year is a masterclass film about two rival reporters falling in love and eventually growing to resent each other.

Gaslight tells the story of a young newlywed couple who moves into a house where the murder of a young woman had taken place twenty years earlier. What follows is suspicion, and a race against time.

Starring two of the biggest actors of this era, Humphrey Bogart and Lauren Bacall, The Big Sleep is about a private investigator that gets hired to look into the gambling issue that a general’s young daughter has acquired. As he continues his investigation, he finds there’s much more to the story.

Gilda had the familiar names of Glenn Ford, Rita Hayworth, and George Macready starring in it, and is about a cheating gambler who develops a partnership with a casino owner, only to find that the casino owner’s wife is his ex. Cue the music.

If it has the word dangerous in it, you know that there’s about to be a ton of drama on the way. Dangerous Years is about a teenage on trial for murder who finds out that he’s more connected to the prosecutor than he ever thought.

Spencer Tracy took his turn with a Dr. Jekyll and Mr. Hyde film, taking on the roles of both Jekyll and Hyde. The film also starred Ingrid Bergman and Lana Turner.

Ever heard of Phantom of the Opera? It’s a pretty decent film if you ask us. A little on the scare/creepy side, but still really good. Obviously there’s been plenty of remakes since, but it wouldn’t hurt to check this version out as it has what the newer version lacks, a haunting score.

That concludes the 1940s, we'll be back with the 1950s installment of Fashion on Film soon.