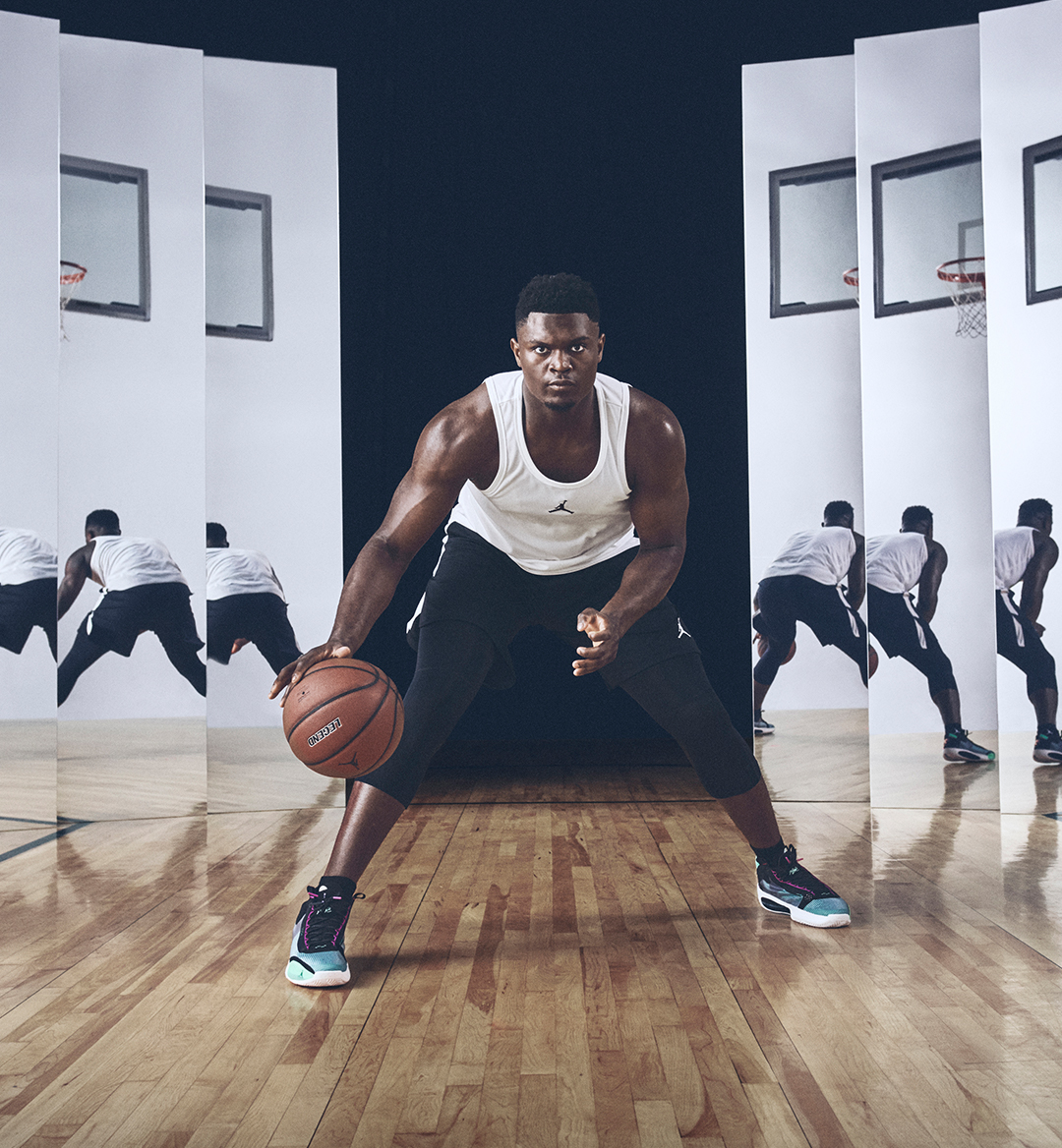 This weekend, adjacent to all the fashion week mayhem trafficking the streets of New York City, Jordan Brand and its newest signee, Zion Williamson, took to Harlem to publicly debut the all-new Air Jordan 34. Williamson, arguably the most important incoming NBA rookie since LeBron James, caused an understandable frenzy when he walked onto Harlem’s Dunlevy Milbank Center court, newly updated with Jordan branding for the event.

Surrounded by exuberant young fans who were seeing the New Orleans Pelicans forward for the first time, Williamson rattled off two thunderous dunks—the latter of which was a uniquely effortless between-the-legs slam that flooded every corner of social media over the weekend. In each frame of the now-viral clip below, Williamson soars through the air, similar to Michael Jordan himself, wearing the latest signature shoe of the long-retired GOAT.

A public unveiling like this is critical for the highly touted Air Jordan series. Jordan Brand, through no fault of its own, is undeniably burdened by its past—especially when releasing new products. Given the brand’s history of industry-best designs that wholly define what basketball sneakers should be and just how impactful they remain, their peerless lineage invariably makes each new release—when it doesn’t have historical context—that much more difficult.

Jordans can’t just be good; they need to be better, praiseworthy and filled with technological advancements that will not only drive Nike products but also the sneaker industry at large. Perhaps this excellence-without-excuse approach to creation is what fueled Jordan Brand designer Tate Kuerbis to produce one of the series’ best installments in recent memory. Or, more grandly, a future classic Jordan sneaker. 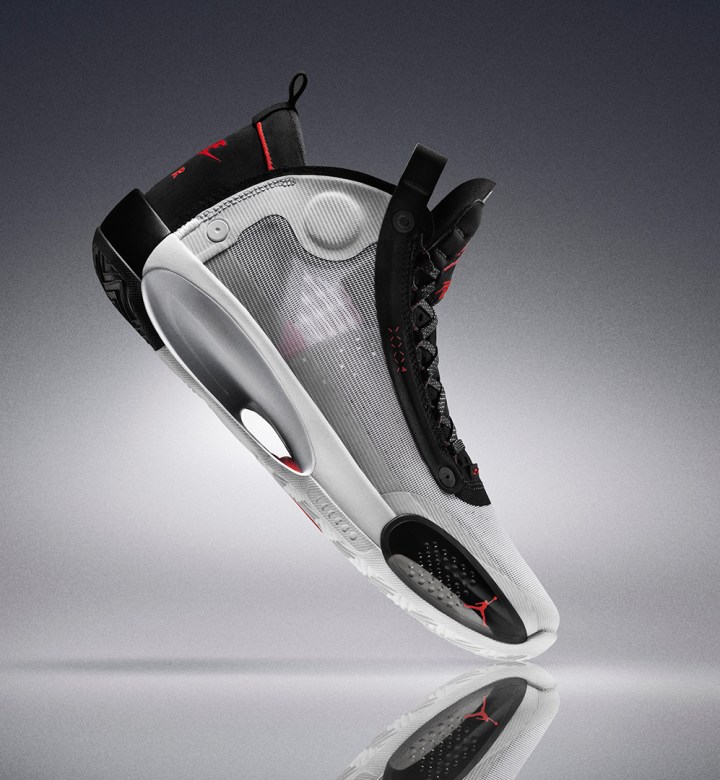 “One of the things I love about this shoe is that it doesn’t remind you of any Jordan from the past,” Kuerbis said of his latest creation. “But it does remind you of the purest form of a basketball shoe.” What Kuerbis is referring to is the fact that this shoe doesn’t directly reference a Jordan sneaker from the past. In recent times, Jordan Brand has sought inspiration for budding designs from the in-house lineup, sifting through its unmatched archive to inform contemporary works. This practice has proved successful at times, but at other times it has come off as perhaps too conforming.

Historically, Jordan Brand is best known for newness and groundbreaking innovation. All the same, it currently dominates the sneaker industry with an expansive retro collection fueled by sneakers designed 20 to 30 years ago. But when it comes to producing new Jordan silhouettes, focusing on the former and not leaning into the somewhat simpler notion of tracing the past ensures that a style like the Air Jordan 34 will soon hold court as a desired retro itself.

“The Air Jordan signature game shoes have become the most influential line of performance footwear in basketball history,” said Gentry Humphrey, vice president of Jordan Brand Footwear. “By introducing new, proprietary innovation with the XXXIV, the line’s game-changing legacy is extended to a new generation of athletes.”

The Air Jordan signature game shoes have become the most influential line of performance footwear in basketball history. 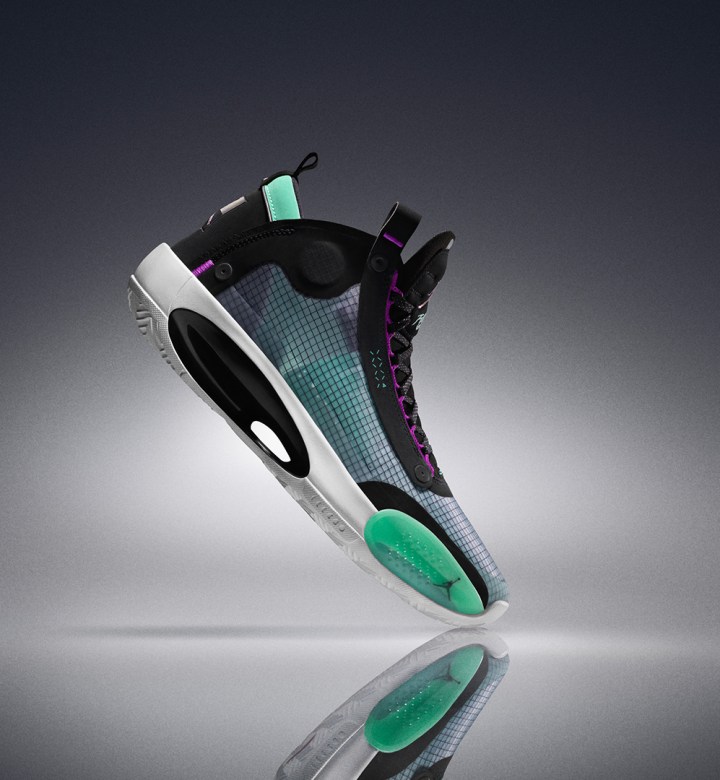 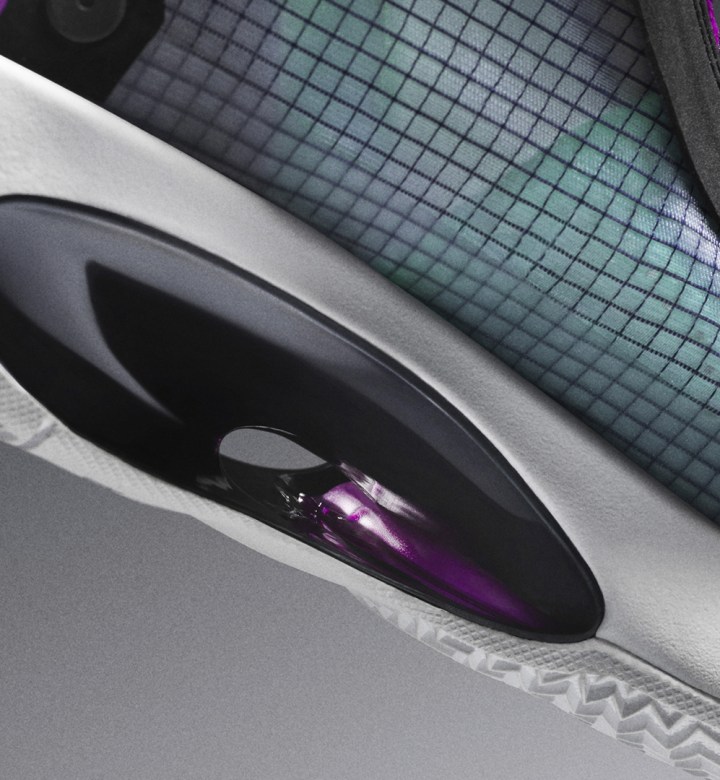 Following a reductive theme represented in the shoe’s less-is-more approach, the Air Jordan 34 is among the lightest sneakers in the Jordan series; a men’s size 9 weighs just 13.1 ounces. Taking notes from Williamson and other explosive Jordan athletes that play above the rim—like the newly signed Jayson Tatum and veterans Blake Griffin and Russell Westbrook—creating a lightweight shoe with bouncy energy return was central to the design. In response, Jordan Brand is debuting its Eclipse Plate, a clever technology formed by two Pebax pieces for heightened propulsion. Eclipse Plate is largely a modernized iteration of Jordan Flight Plate, a beloved brand innovation from years past. The Air Jordan 34 is also packed with hallmark Nike cushioning. Customary Zoom Air units pack both the heel and forefoot for long-standing comfort and durability.

Though it is premature to deem a new sneaker a future classic before it is even released, this behavior is exhibited in popular culture with relative consistency. When a new album debuts on a Friday, we quickly label it as among the year’s best (or worst) by Monday morning. When adored fashion collections grace the runway, we deem them “best in show” even though they’re presented seasons ahead of landing in stores. The common thread is both enchantment with newness and personal experience, where people know exactly what it is they like when they’re presented with it. Is that so wrong?

The Air Jordan 34 has all the traits of a perfect basketball-meets-lifestyle sneaker: glowing new design language for off-court functionality and boundary-breaking performance innovations for on-court dominance. Its defiance to repeat the past breathes life into Jordan’s present. Moreover, it promises limitless possibilities for the future.

Expect the Air Jordan 34 to be available at select Jordan retailers and on SNKRS on September 25.