Arena Embroidery is Just Getting Started

Chatting with Rocco Arena about the studio's work with Drake, Supreme and more 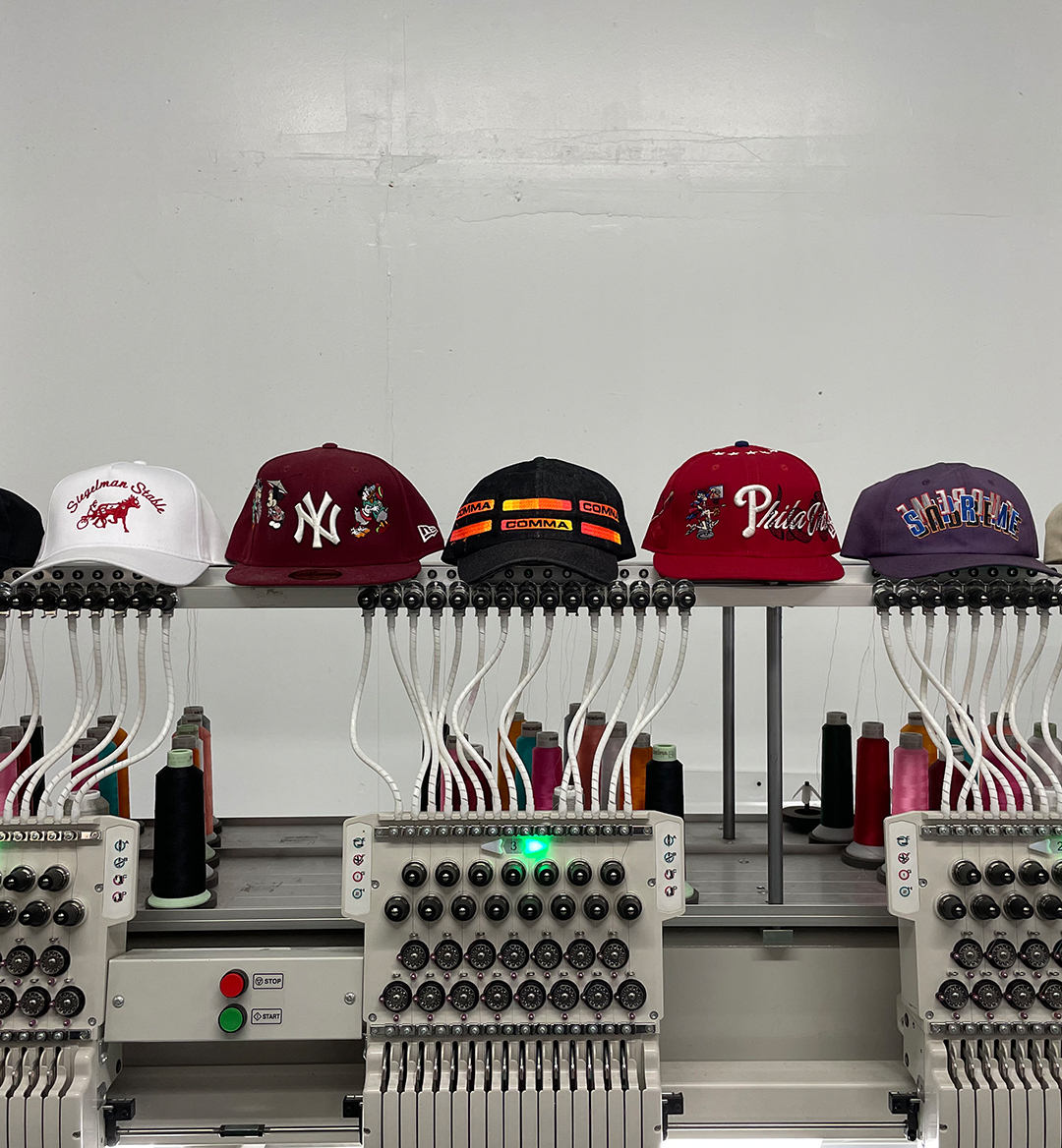 The north star for a lot of creatives is finding a career that manages to balance fine art with a technical application. Rocco Arena has come about as close as one can with his Brooklyn based studio Arena Embroidery. As an embellishment studio, Rocco and his team of five are in a unique position where they have the opportunity to help brands and high profile clients bring their ideas to life—through sampling, actual design development and full scale production.

Rocco and I met during an event we hosted for Siegelman Stable; Arena does all of the embroidery for the brand beloved by Kylie Jenner, Justin Bieber and more. So I headed over to his Brooklyn studio to hear a bit more about how Rocco got into embroidery and eventually founded Arena.

Rocco is originally from Philly, went to film school in NYC, and then moved to LA to try to get in the world of music videos. “But I ran out of money, and needed a job job. And I didn't get a job in the film industry, I got a job with Nike sportswear, making one-off garments for Nike athletes and the public, too. I knew nothing about apparel embellishment at all,” he tells me of his first job in the space—a pretty good gig. He worked with Nike from 2012 to 2015 before a myriad of personal reasons caused him to return to the east coast to be closer to family.

It was during this time that he took the skills he had learned with Nike into conducting some freelance embroidery work for clients he met through friends in the space. “I still kept doing embroidery, odd jobbing. There were a couple brands I would make files for,” he tells me. “Making files” is a big part of what sets Rocco apart from other embroideries, and it’s one of his primary responsibilities with Arena to this day.

“And then I slowly transitioned into working for artist Borna Sammak, who was mainly a video artist, an old friend. He came and saw the machines and everything I was doing for Nike and wanted to incorporate that into his art. So then I started working for him as an artist's assistant, making paintings and sculptures, using the stuff that I had learned and those machines,” he goes on. After working for Sammak for a few years: “Four summers ago, I decided to go into business for myself, and started this company.”

“Arena” is not just Rocco’s family name, it’s also a Latin word, which translates to “sand.” He tells me a fun anecdote about how it became the English word for a stadium: “Arenas are called that because everyone would chant for more sand to cleanse the blood during gladiator games.” Chanting for sand, in this context, was chanting for the next event to begin. You learn something new every day.

As someone already deeply embedded in the fashion design world of Brooklyn, the clients came in pretty quick. “It was all word of mouth in the beginning,” Rocco tells me, going on to explain how a longtime friend of his, Alex Dondero (who he refers to as an “older brother”), runs LQQK Studio, a popular screen printing studio and brand in the city. “A lot of those clients were looking for embroidery. Word just spread.”

“One of the first things when I first got the machine was a Yeezy runway job, just stamping sweatshirts and stuff with logos. That was exciting. Like the second that I got an embroidery machine, doing stuff for runway,” Rocco recalls some of his most exciting early clients.

“There was a client that helped me build what this is today,” Rocco tells me, starting off a story that culminates with his proudest achievement to date. The aforementioned client was a fairly underground rapper from Toronto named Aubrey Graham.

Aubrey Graham, or Drake as you may know him, found Arena through his Image Director at the time, Mellany Sanchez, and commissioned Rocco to do some pieces for a giveaway. “It started as a giveaway for the Scorpion tour. They brought out a basketball hoop and you took a half court shot for like 20 grand or something. Whether you made the shot or not, you got a basketball jersey.” Drake loved the pieces, so he ended up commissioning Arena to make the majority of what he wore for the Scorpion Tour. You can see Drake in a vest concocted by Arena in the legendary SICKO MODE video below.

But that’s actually not the culmination of this story. “The Raptors won the NBA championship, and he needed a jacket and Air Force Ones to wear to the parade. We made him an MA1 flight jacket, decked out, embroidery everywhere. And then some white AF1s with the Canadian flag knocked out on the swoosh.” 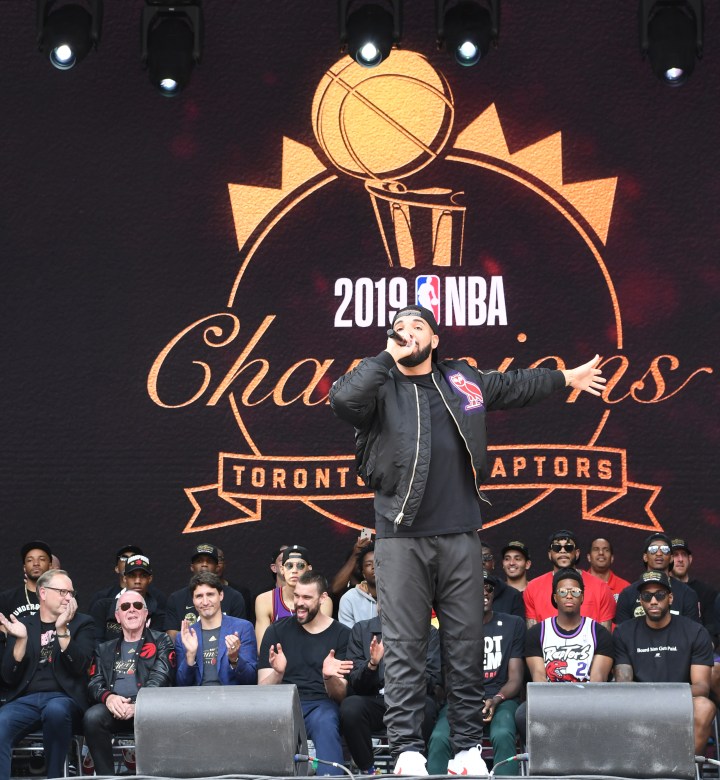 And while the winningest NBA teams of all time have a dedicated designer ready to create championship merch, Toronto’s first-ever championship meant it was an opportunity for a studio like Arena to get involved. “There was no protocol for… You know the Lakers like have a guy that does their jackets,” Rocco chuckles, recalling how what he considers his proudest work came to life. “[The Raptors] were like, ‘Well this jacket's sick, can this be the team jacket?’ And I was like, ‘Yeah, absolutely.’ So we got a bunch of 5XL MA1s in and made everybody on the team the jackets.”

“I consider that my biggest accomplishment. I made the Championship Toronto Raptor teams their championship jackets, right in this space. One by one.”

1 of 1 exclusive from The Boy @Drake. #WeTheNorth pic.twitter.com/GFTTvkag5f

“That was great,” Rocco grins to me as he finishes recalling the project.

They also worked on some commemorative hats for the Philadelphia 76ers, a special project for Rocco as a Philly-native and lifelong fan of the team. You can read more about that collaboration between Lapstone & Hammer and the 76ers here.

Since then, a significant amount of Arena’s business comes in the form of sampling. “We do a lot of sampling. Sometimes we come up with our own art, but mainly they're giving us art to see sampled quicker than the factories can do, so they can present in meetings. the computer image can only go so far in a meeting,” Rocco explains. They currently do a lot of sampling for Supreme, among other brands. It’s a major goal of Rocco’s to escalate this kind of work even more.

“My main job in the company, other than consulting and talking over stuff, is making the embroidery files. A lot of shops don't do it in house. There's very little back and forth with testing and getting it right. That's pretty unique about what I and the company do. That's pretty much why we have this niche spot in the industry,” Rocco explains to me.

When we turn to the future, there’s a vast array of things Rocco is excited about. They’re planning to open up the basement of their studio as an archive/material library. He also might want to use the space for retail purposes in the future.

“Project wise, I'm working on courting more fashion houses to do sampling. Making an effort to steer the business into more consulting and sampling. And having a space that celebrates that is what's most exciting for me right now.”

They’re working on some merch for Korean popstar B.I. with a brand called Ojeito. “It’s been really fun. We embroider all kinds of stuff, but it's mainly sweatshirts and ball caps. So exploring their silhouettes and turning a pop star's branding into merch has been fun.”

When I ask Rocco his favorite thing about what he does, the answer flows naturally. “I think that's easy for me to answer. It's a skill that is the perfect blend of digital, mechanical, manual. It has a bunch of different components of a skill or a craft. It's still exciting to watch the thing sew, after you've meticulously sequenced your file and drawn the shapes and all, to see it come to life,” he says, and I can tell he means it.

I was curious to hear if Rocco and Arena have any intention of creating pieces of their own. “We don't have a brand, but we have fun,” he chuckles to me, before going on to tell me about an immensely silly project: a thread gilly suit they produced for an advertisement in a magazine called LILY PAD, helmed by Bergen Hendrickson, an artist in the Arena Embroidery universe. 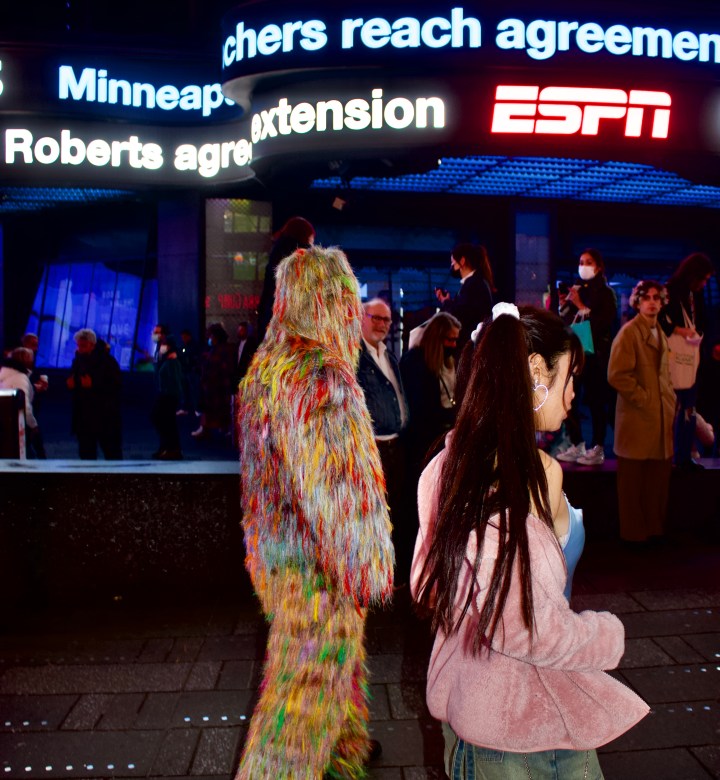 In its most basic form, Rocco has a clear vision for the future: “I want us to be excited about what we're doing.” After spending time in the studio with the team, including Rocco’s dog Lorenzo, it’s clear they’ve been maintaining the ethos so far.