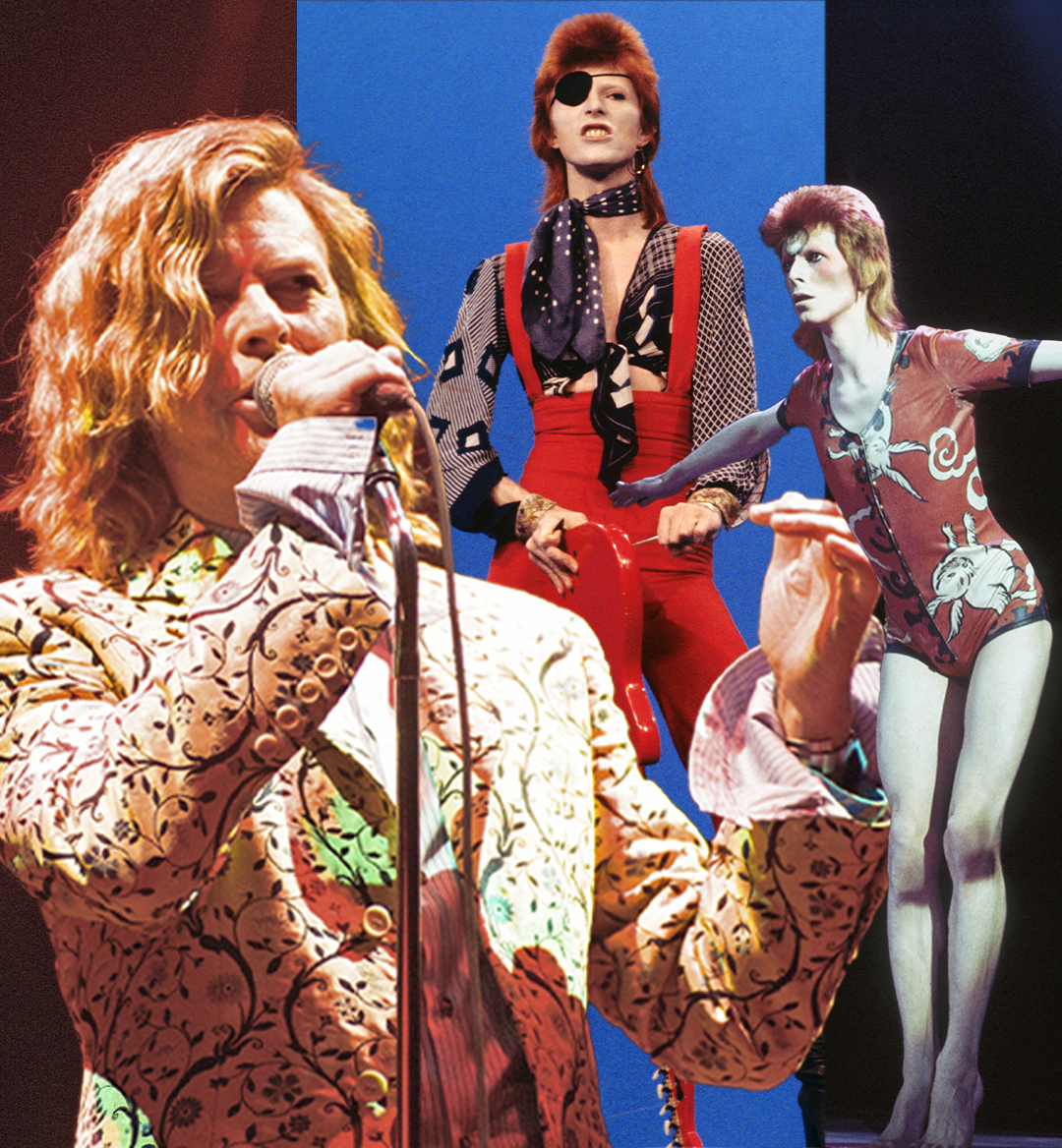 David Bowie. Aka Ziggy Stardust. Aka Aladdin Sane. Aka Halloween Jack (you get the point). It’s not often that a David Bowie comes around. A multi-generational talent who’s regarded as being one of the most prolific entertainers of the 20th century. An innovator known for his countless reinventions, visual concepts, and stage costumes. A defining force that shook up the 1970s and 80s with over 100 million records sold (which makes one of the greatest sellers of all time), and multiple awards/certifications including countless number one albums (eleven total), gold and platinum certifications, and an induction into the Rock and Roll Hall of Fame obviously. Bowie’s influence remains heavily felt today, and that includes his style influence which is still frequently drawn upon. The legend was the epitome of what is now known as “glam rock fashion,” challenging gender norms, critics, and societal expectations through the many looks that comprise some of the best David Bowie outfits of all time. 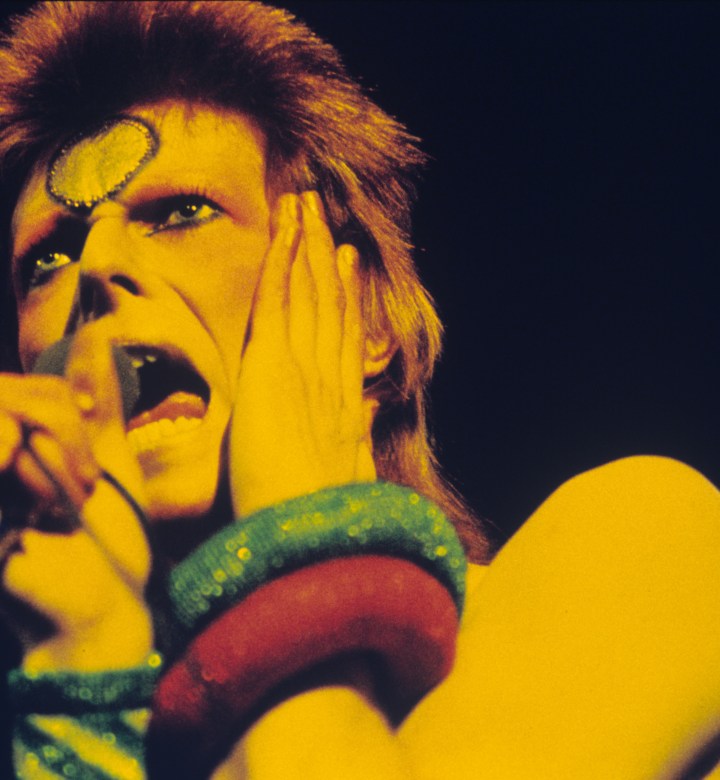 Style was such an important part of Bowie’s being that he even made a song in 1980 called “Fashion.” And if that wasn’t enough, Bowie married supermodel Iman in 1992 making them an instant powerhouse fashion couple.

With yesterday being his the anniversary of his passing, and brands such as Midnight Art Dept. releasing collections in his honor (the collection came out in October), we thought it would be cool to look back at his top 20 style moments. Let’s Dance!

On June 21st, 1972, David Bowie made an appearance on the television series Lift Off, where he performed his iconic hit “Starman” for the very first time. In addition to the memorable performance, the singer also made a statement in a red, blue, and gold quilted two-piece ensemble, and with red boots with black laces. The shimmery outfit went perfectly with his reddish brown hair, making it impossible to not keep your eyes on him the entire time.

During this time, Bowie was still very much in his Star Trek intergalactic space mode, which kind of fit the mood of the late 1960s and early 1970s to begin with. “Starman” reached number 10 on the UK Singles Chart, making it his first major hit since “Space Oddity” three years prior. 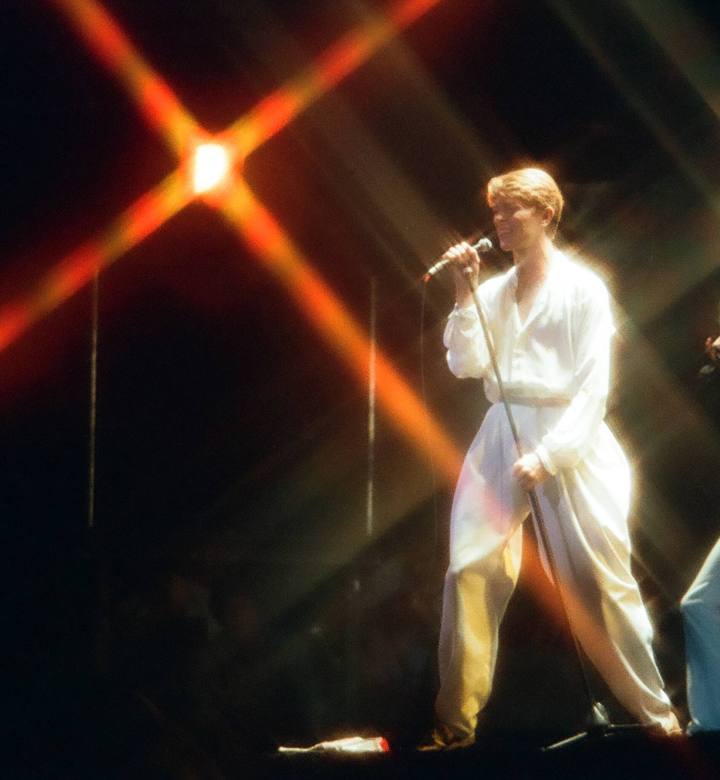 Bowie performed at Earls Court on more than one occasion, but his 1973 performance is the one that’s recognized by many as being one of his top all time style moments. We agree, but we also think that his 1978 show deserves some love as well. By the time 1978 rolled around Bowie had mostly left the space themes behind in his costuming as he was ever evolving in both style and music, so with that came a new toned down persona that was still very much earthy.

This oversized white suit is definitely a cool style moment from the artist, and you can still see its influence today with certain jumpsuit styles and colors (especially with the belt at the waistline).

Remember how we told you earlier that Bowie made a song in 1980 called “Fashion?” Well you didn’t expect for a fashionable music legend to not show up fashionably dressed for the music video to a song named “Fashion” now did you? In our opinion, “Fashion” is one of Bowie’s underrated music videos, which was very much in line with the grunge style he was sporting at that time. For the video, the rock star wore a simple navy blue/black button down shirt that was left open David Bowie style, and tucked into white baggy pants. Simple, yet still very cool. 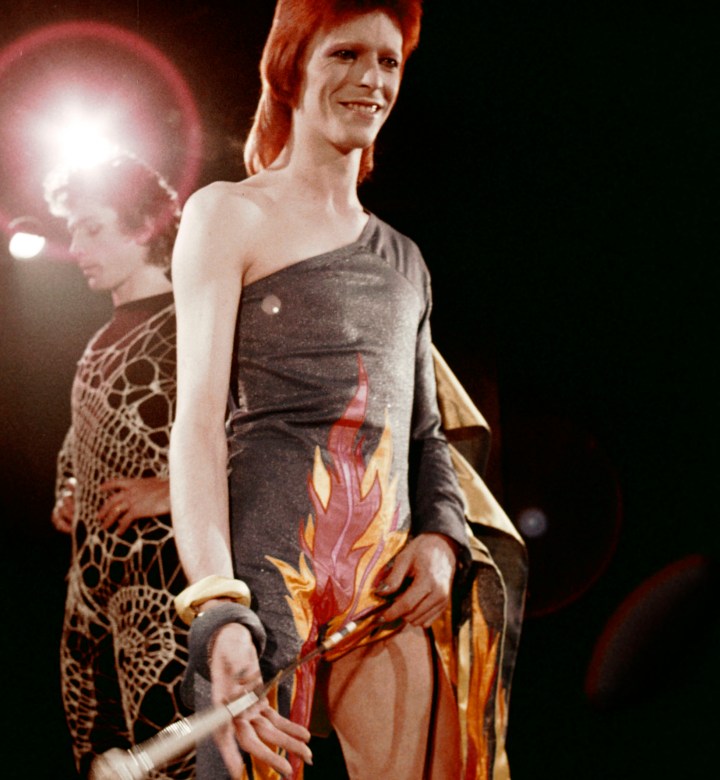 On November 16th, 1973, Bowie performed a special longform show on the Midnight Special at London’s Marquee Club where he was in the midst of embarking on his farewell to Ziggy Stardust. For those who don’t know, Bowie had multiple personas throughout his career, and when he grew tired of them both musically and creatively, he would bid them farewell. It was basically his way of reinventing himself.

So in 1973 he was making his final rounds as Ziggy, and we have to say this outfit that he rocked for his 1980 Floor Show musical (which was a part of the Midnight Special) was out of this world (literally).This is another outfit of his that has been heavily recreated.

Bowie gave so many great fashion moments on stage that sometimes people forget about his music videos! The video for “The Jean Genie” had great fashion all around from Bowie and his leading lady, to the random people walking around the street who probably didn’t find out that they were in a music video until later.

The four minute clip starts off with Bowie performing at a concert where he can be seen wearing a white ensemble with padded shoulders, then transitions to an off stage shot where he rocks a black leather jacket, cut offs, Rastafarian style socks, and patented shoes. “The Jean Genie” is recognized as being one of Bowie’s most recognizable tracks. 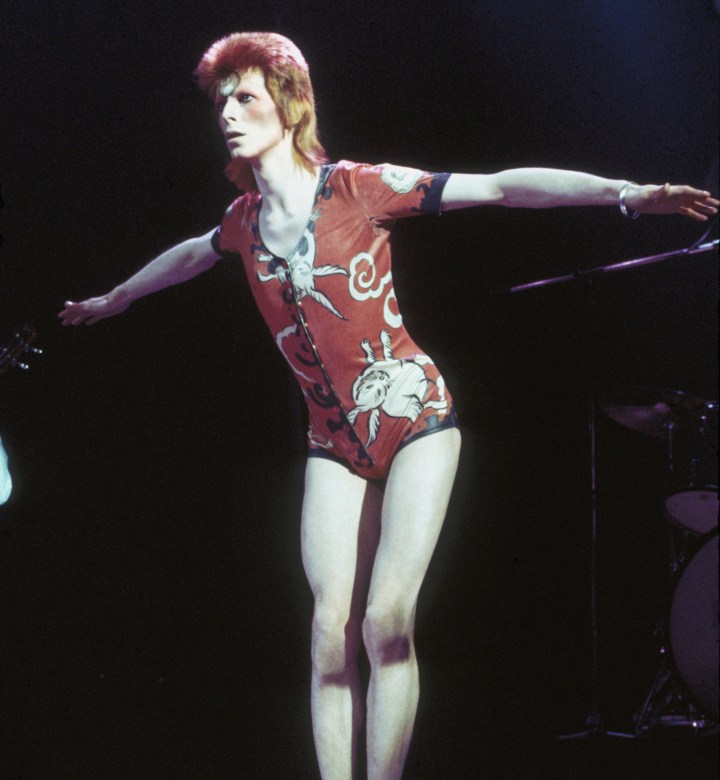 Legend has it that Bowie’s 1973 performance at Hammersmith was his very last as Ziggy Stardust. And when it’s the last time you are ever going to do something, well, you make it special. Despite the occasion, there’s not a whole lot of pictures of Bowie’s performance that evening, and a good percentage of the ones that are available are either in black and white, or you can’t really see much of what he was wearing. That, our friends, is what makes the outfit so great.

You can’t really make out much of it, but the little bit that you do see is spectacular. Maybe one day we will be gifted high quality photos of this concert in color. You never know what could become unearthed in the future. 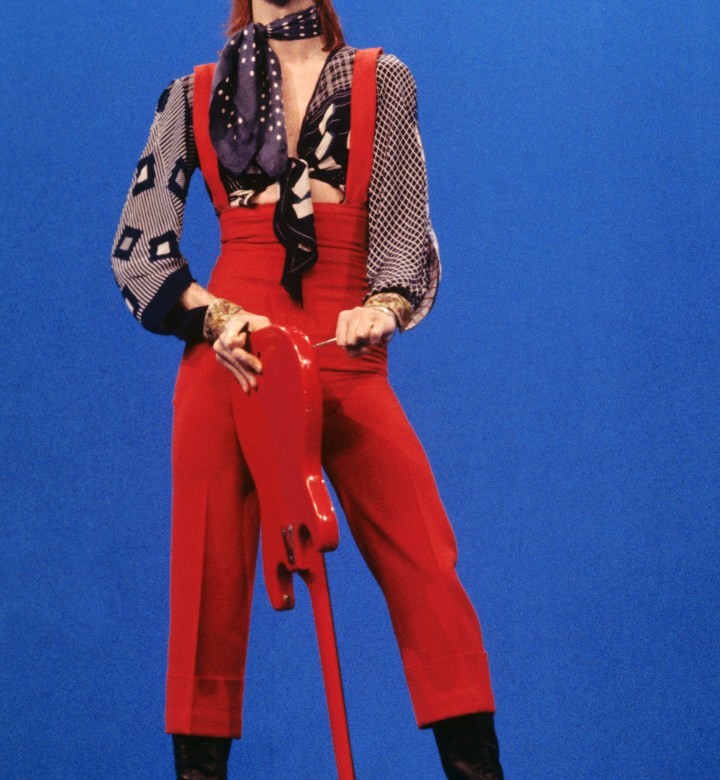 In February 1974, Bowie took to the Top Pop stage to give an amazing performance of his song “Rebel Rebel,” and he did so in a pirate eyecap, a polka dot tie around his neck, a long sleeve top tied around his chest, and red overalls to complete the look. This particular ensemble was an interesting one that wouldn’t have worked for anybody else other than David Bowie.

The 1990s brought about a very different David Bowie. One who was a little older and in a different phase of life than what he had been ten to fifteen years prior. And with that evolution came a difference in his personal style. The video for “Fame 90” shows a more suave David Bowie as he rocks a “regular” suit with slicked back hair. While not the most attention grabbing look he ever sported, it is a nice look at his maturation. “Fame 90” was originally recorded in 1975 as “Fame” for his album Young Americans, with “Fame 90” being the 1990 remix. 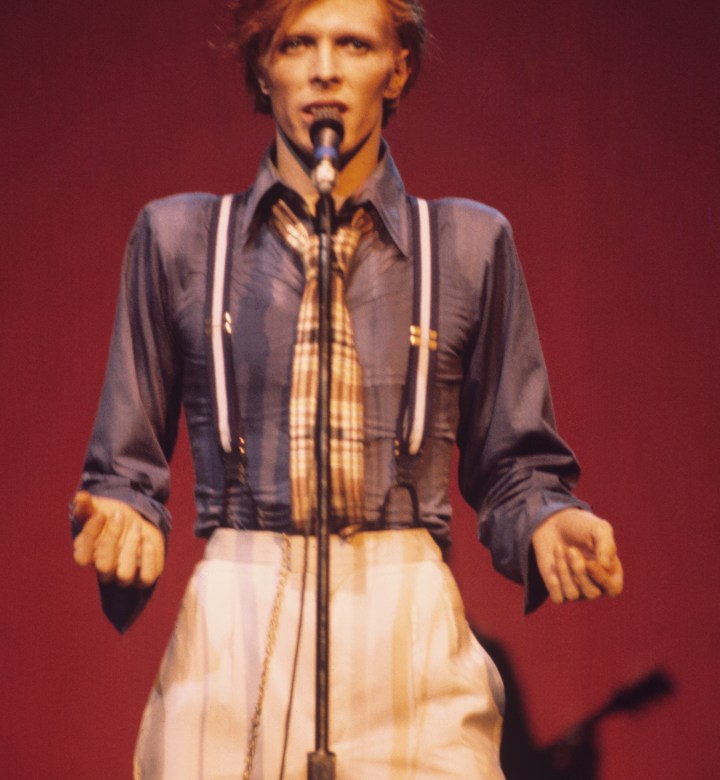 David Bowie walked so Napoleon Dynamite could run. Jokes aside, this was an interesting fashion moment from the artist during his October 1974 Philly Dogs tour with the gray dress shirt underneath baggy white overalls. This piece was completed with a plaid tie, giving us cool school nerd with a rock & roll Bowie edge. 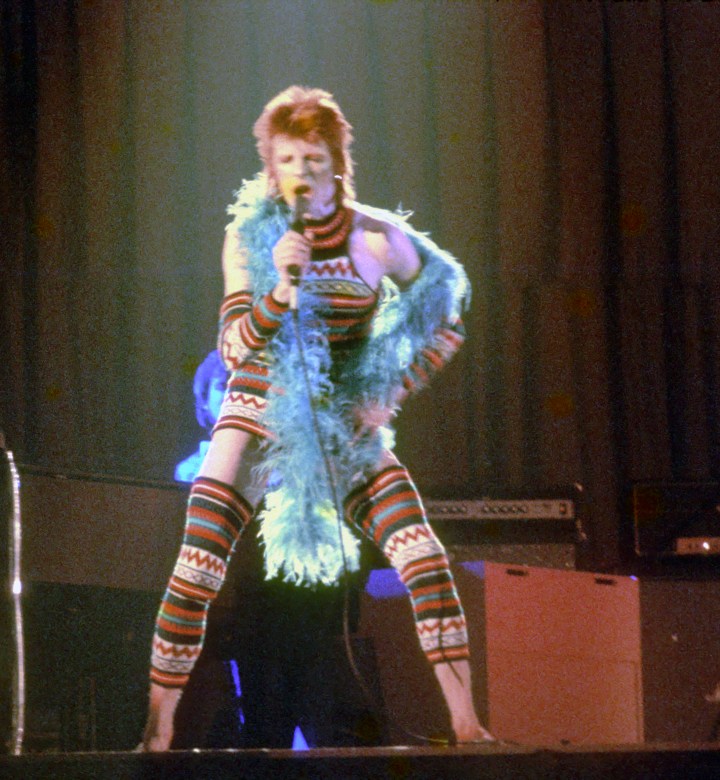 If it feels like we keep coming back to the Ziggy Stardust era, it’s because that time period provided so many defining David Bowie looks that were compelling. While we don’t know exactly where this performance was other than somewhere in Los Angeles, we had to include it as one of his greatest moments because of his sheer creativity. From what we can see, Bowie (or Ziggy rather) appears to be wearing a uniquely patterned halter mini dress paired with matching arm and leg sleeves, and blue feather boa to match. Who was doing it like that? Nobody other than Ziggy of course. 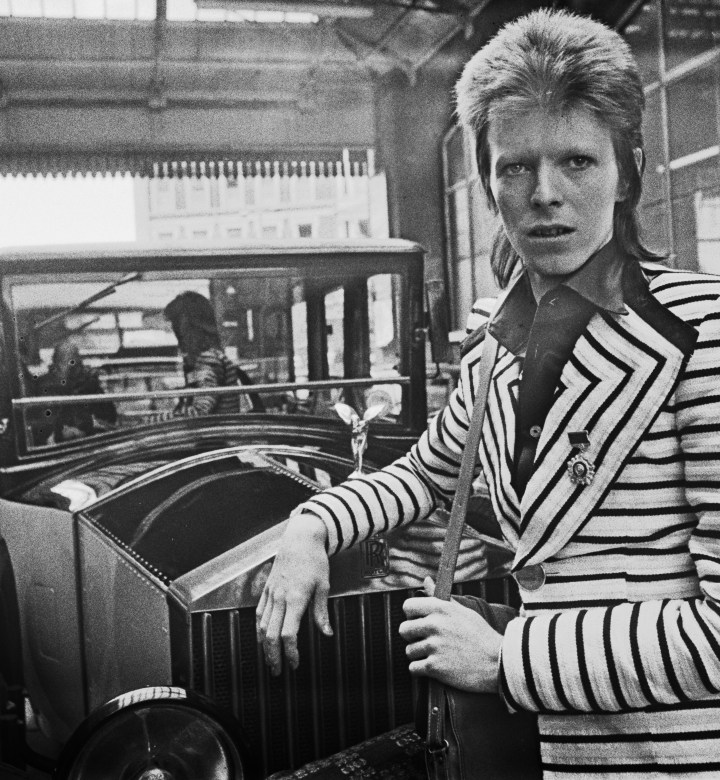 And yet another example of an outfit from the Ziggy Stardust era during a London 1973 appearance at King’s Court. We have definitely seen dresses similar to these become popular in the last decade or so, proving once again that Bowie was ahead of his time.

Live Aid 1985 was one for the ages. While in our opinion Queen has the honors of having the performance of the evening, Mr. Bowie’s was pretty darn good too. Also, one time for that baby blue suit which was a very clean fit.

The video for “Blue Jean” is a masterpiece, and so was Bowie’s style in the vid which showed wearing a red neck tie, an oversized gray shirt, and baggy pants. While the outfit sounds simple and easy to recreate, it’s really not. Watch the video and you will see exactly what we’re talking about. “Blue Jean” was released in 1984 for Bowie’s sixteenth studio album Tonight, reaching the Top 6 in the U.K., and the Top 8 in the U.S. 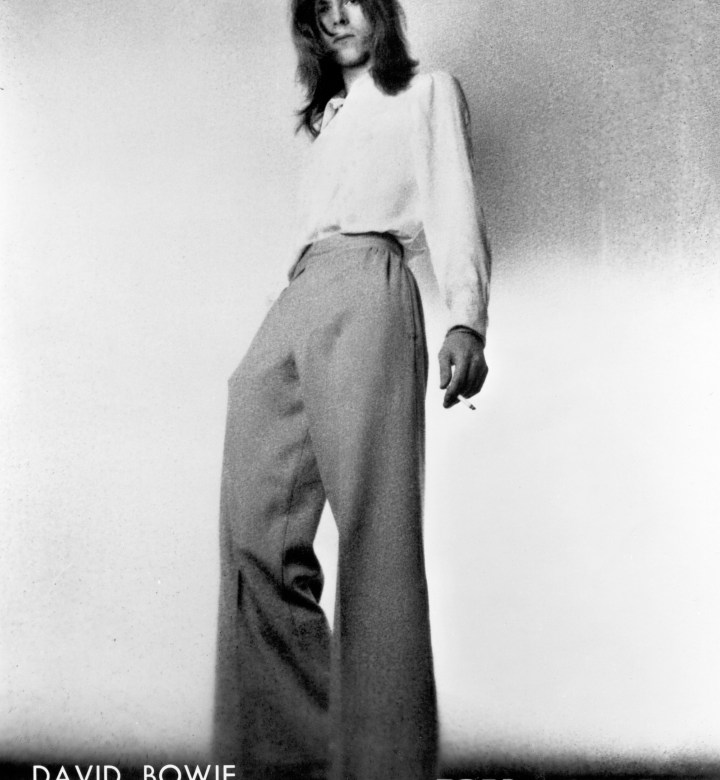 This rare photo from 1971 shows a young then-rising star Bowie wearing a white dress shirt tucked into oversized dress pants, and was completed with his long locks which was something we didn’t see much of once he became a super duper star. The photo was taken in London, England in December 1971 to promote the release of his Hunky Dory album. 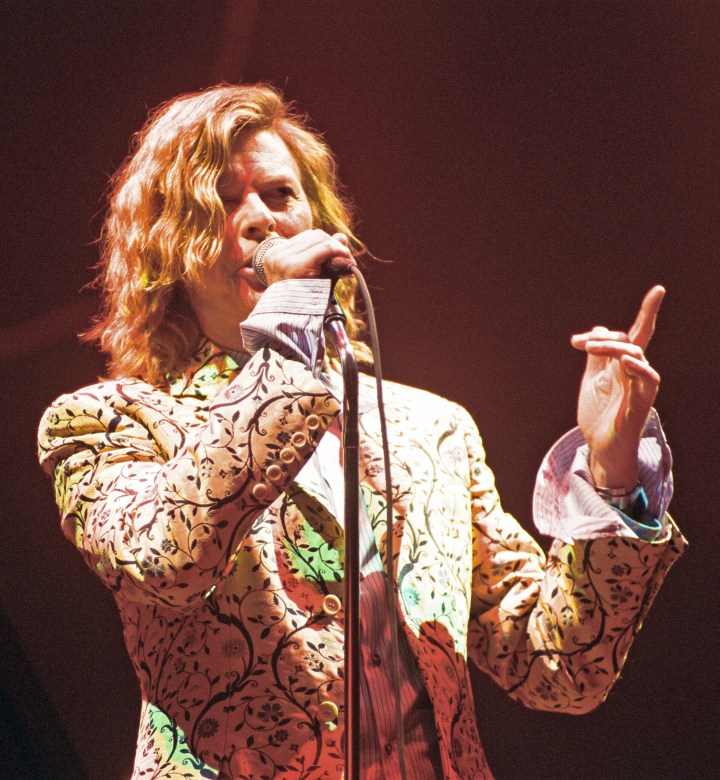 We had to include another shot of Bowie from the 2000s because he very much indeed still had it. The artist took to the Glastonbury Pyramid Stage wearing a coat designed by Alexander McQueen that was fit for a king. Also, the 2000 Glastonbury Festival saw the return of Bowie’s long locks, which was something we hadn’t seen from him for a while.

We couldn’t leave out the video for “Modern Love” now could we? Released in 1983 as the first single off his Let’s Dance album, both the music video and cover artwork for “Modern Love” showed the artist rocking a tan suit that was a simple look for the icon, but still one that stood out. The single experienced a ton of success on the charts, reaching number two on the U.K. Singles Charts, and number 14 on the US Billboard Hot 100. 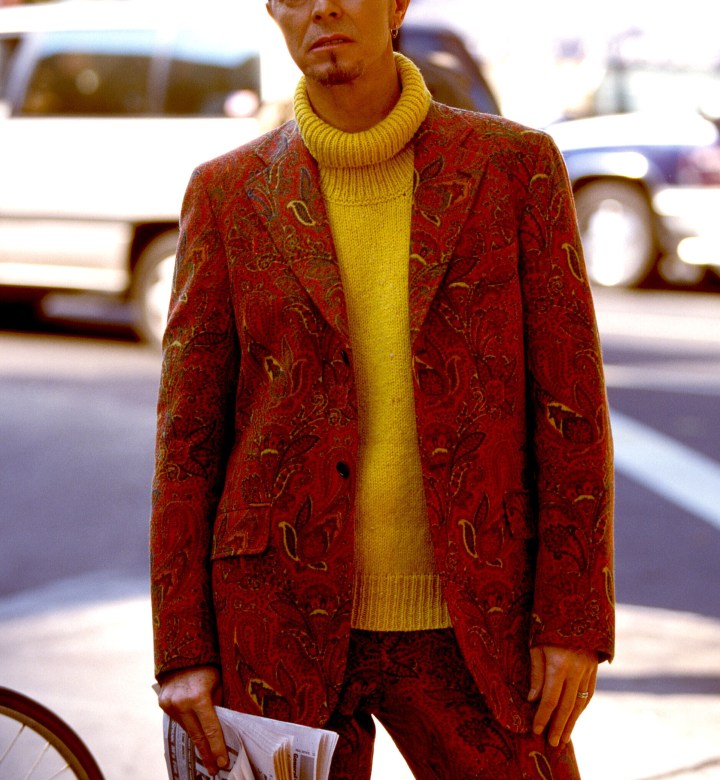 Please enjoy this random undated photo of David Bowie from 1994 in a yellow turtleneck and red suit. This is your outfit inspiration for the day. You’re Welcome.

This right here is self explanatory. Bowie’s blue eyeshadow and pink lip gloss contrasting perfectly with his fiery orange hair. The bluest suit we have ever seen in our lives. The tie. Freaking iconic. 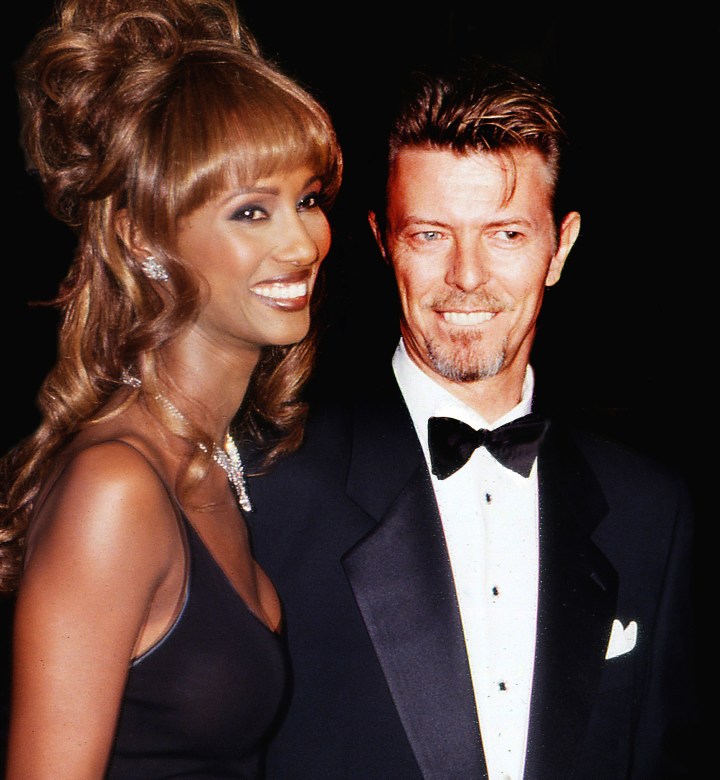 And of course we also had to throw in a couple's picture with his supermodel better half Iman. When it comes to the list of most stylish couples of all time, we’re not sure anyone tops Bowie and Iman. Perhaps John and Yoko could tie for the number one spot, but the point is... David Bowie and Iman will always be one of the most stylish and attractive celebrity couples of all time.

And last but not least, the music video for “Space Oddity.” There’s just something incredibly prolific about this legendary music icon sitting on stool in a shimmery outfit while playing his guitar and singing this heart tugging song. Fun Face: “Space Oddity” was first released in July 1969 as the lead single of his second studio album David Bowie. The track was reissued by RCA Records in 1972 along with the music video, and would give Bowie his first U.S. hit. If at first you don’t succeed, try it again.

A very Happy Birthday to one of the greatest musicians and performers of all time.