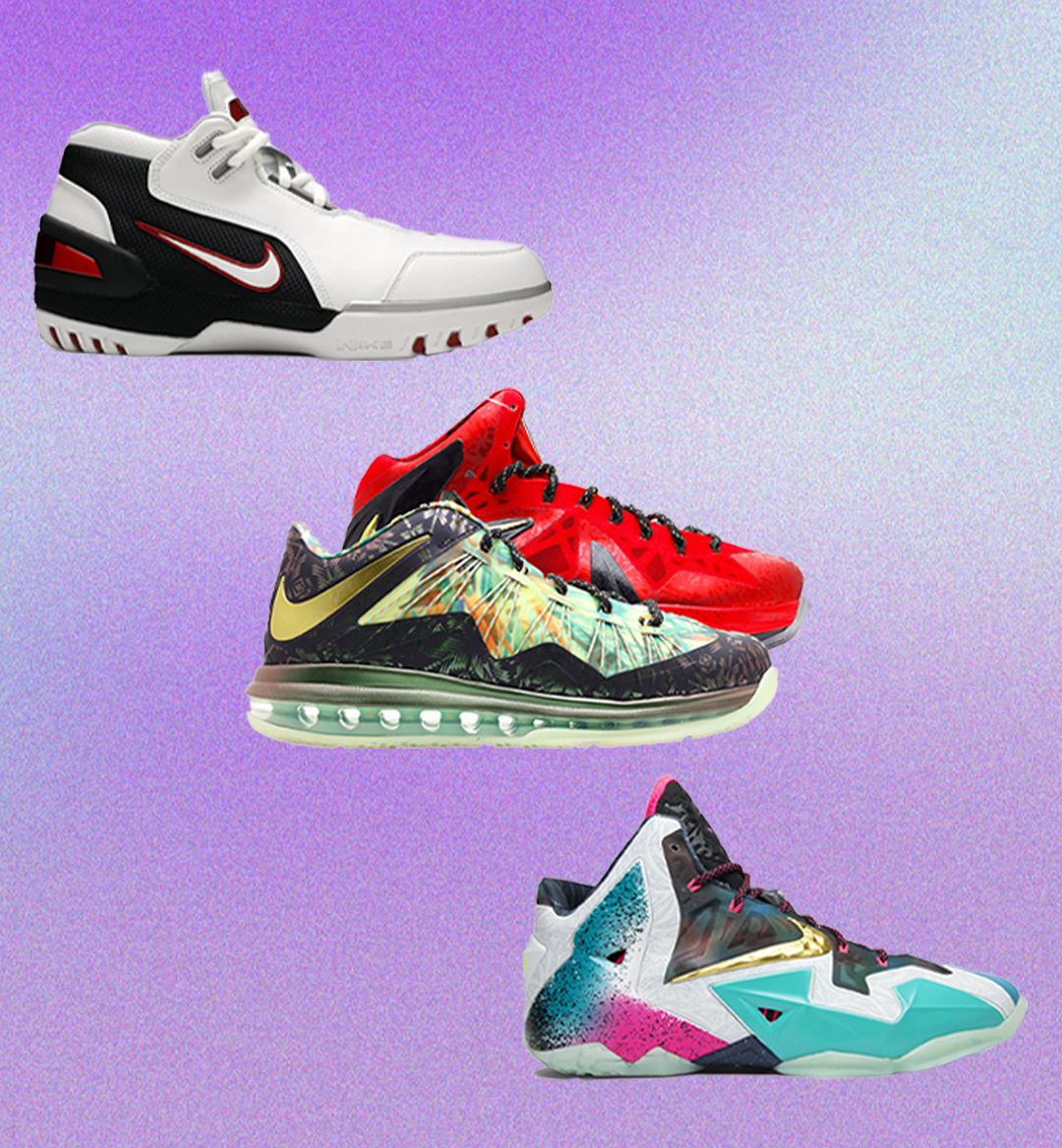 Twenty years. 2-0. That’s how long it’s been since LeBron James signed his deal with Nike. The same way Bron has given us twenty years worth of epic highlights and dazzling moments, he has also blessed us with some pretty dope sneakers. Since releasing the LeBron Air Zoom 1 in 2003, there have been consistent drops each year, and today we are taking a look at some of the best LeBron shoes to ever grace the court. One of the coolest elements of LeBron’s sneakers is the fact that they tend to be tied to the different eras of his career.

There are colorways that represent his first stint in Cleveland, some that capture his four years with Miami, multiple ones that reflect his second stint in Cleveland where he brought the Cavs their first ever championship in 2016, and newer drops that chronicle his current spot with the Los Angeles Lakers where he has been for the past four years. We’ve got a lot to get to, so let’s get started.

The Best LeBron Shoes at a Glance 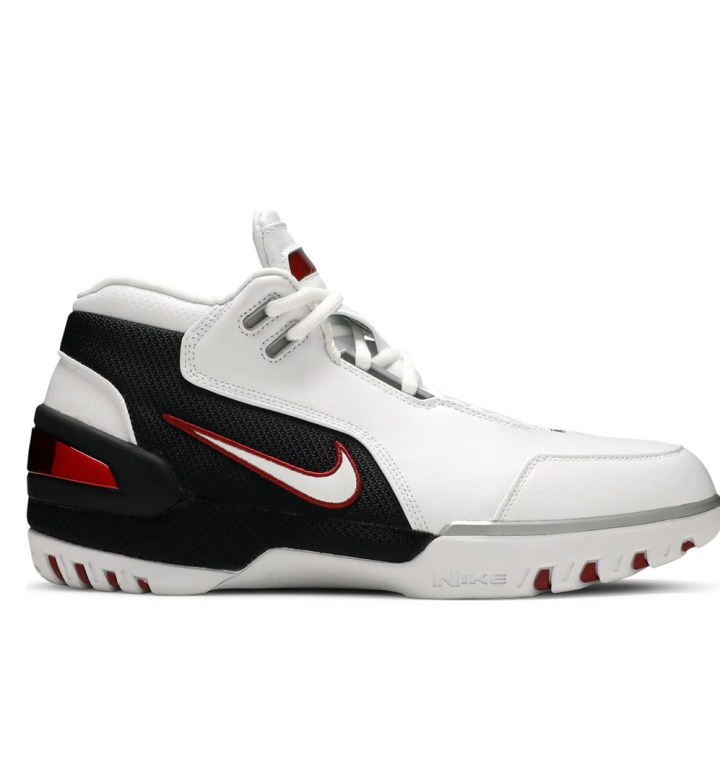 The “Debut” Air Zooms. It’s easy to forget about these in the grand scheme of things, but they represent the beginning of an era. And what a beginning it was. The “Debut” Zooms were released during LeBron’s first season in 2003-2004, and was his first signature sneaker, making the name fitting. Bron wore these Zooms on the court during his very first NBA game on October 30th, 2003 versus the Sacramento Kings where his statline was 25 points, 6 rebounds, and 9 assists.

These sneakers definitely represent a part of NBA history, and there’s still plenty available on the secondary market making them a collectors item. 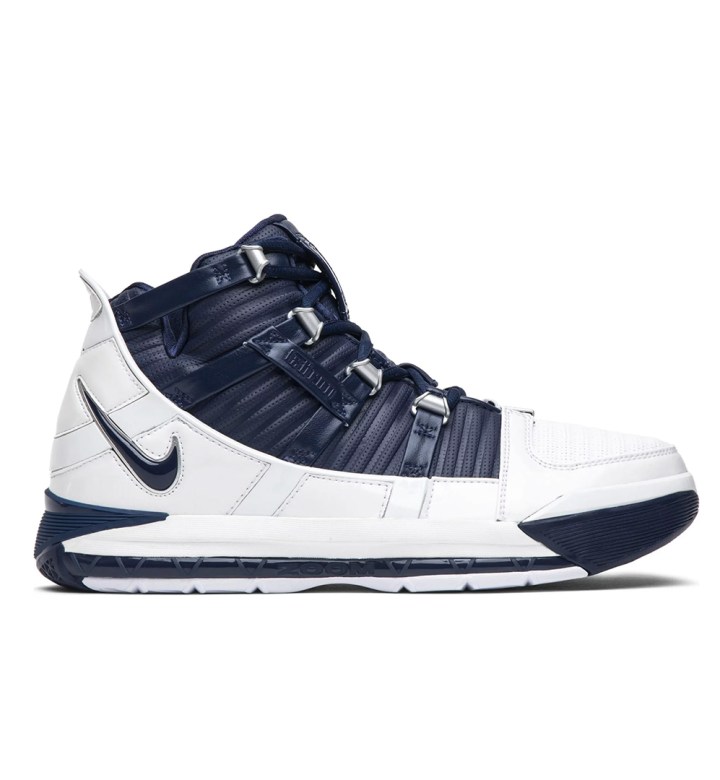 2006 was an important year for LeBron because the 2005-2006 season was his very first time making the playoffs. It was also the year that he dropped the Zoom LeBron 3 “Retro Midnight.” Despite being released nearly seventeen years ago, the shoe still very much remains current in terms of its look and design. So current that the sneakers were actually re-released during the 2019 season, pretty much blending in with all of the other sneakers that were coming out during that time. This is also a shoe that could serve as another collectors item down the line. 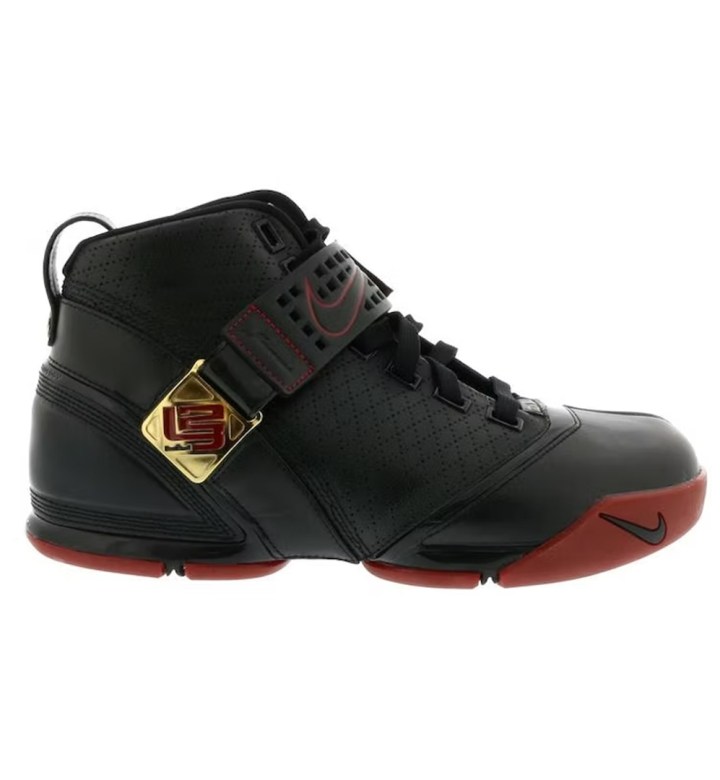 Released in December 2007, the 2007-2008 season did provide us with some standout moments (and sneakers). For starters, LeBron had concluded the previous season leading the Cleveland Cavaliers to their first NBA Finals appearance after beating the Detroit Pistons in a 4-2 upset (this was also the series where he scored 48 points in that sick double overtime Game 5). 2007 was also the year where his second child Bryce James was born.

And even though the Cavs didn’t make it back to the NBA Finals that year, they did have interesting playoff series against the Wizards and Celtics. There are different colorways available of the Black Crimson 5s, but in our opinion this was the one that stood out the most. The starting price on these bad boys are roughly $1000, and unlike the other two shoes we’ve mentioned so far, not many of these are left. Better get on it if you want a pair. 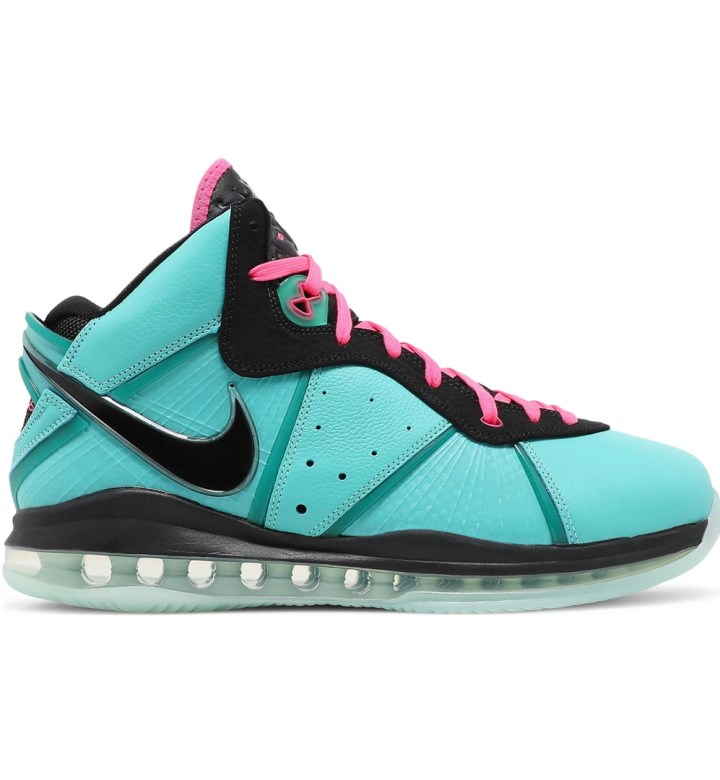 So now we’re in the Miami era. The era of the Big 3 aka the Heatles. Some may argue that the sneakers Bron put out during his four years in South Beach are among his best, and we can’t disagree because they were next level. Much of LeBron’s sneakers during this time period were tropical themed because, well, Miami, and they were super youthful and fun representing everything twenty-somethings love about the 305 from the clubs to the beach. The “South Beach” iteration of the LeBron 8s was just that. Colorful, young, and fun. 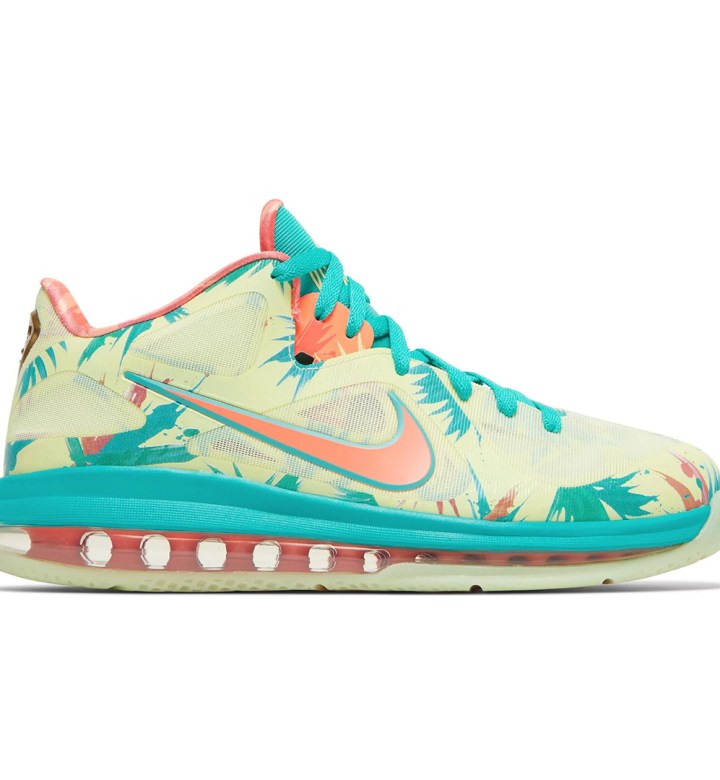 This brings us to the “LeBronald Palmer” Nike LeBron 9s which were finally released this year after nearly a decade of waiting. As you can see, the tropical vibes are in full effect, with the shoes name drawing inspiration from the popular “Arnold Palmer” drink which is made up of half sweet tea and half lemonade. For those who have never tried an “Arnold Palmer,” it’s actually pretty good in our opinion. An even balance of tangy lemonade and sugary iced tea. Just don’t use unsweetened tea. That’s borderline criminal. 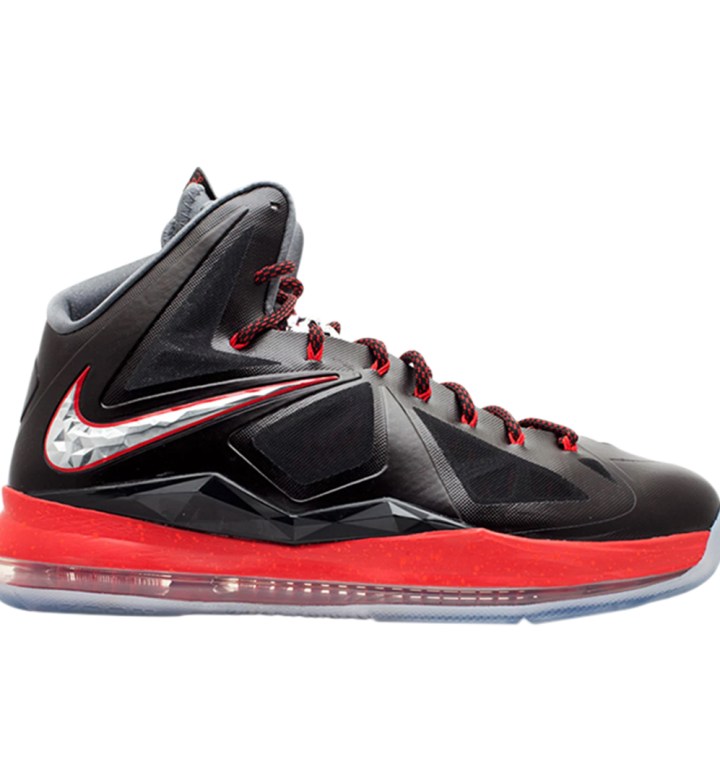 Okay, back to shoes that were actually released during 2012. The “Pressure” colorway is iconic for a number of reasons, the first being that 2012 was the year that LeBron won his first championship with the Miami Heat putting an end to all of the speculation on when/if he was ever going win a ring, and providing redemption to that disappointing loss to that 2011 Finals loss to the Dallas Mavericks.

We also can’t forget that legendary ECF Game 6 matchup against the Celtics when Bron put up 45 points, 15 rebounds, and five assists on 73.1 percent shooting (and that iconic staredown). Pressure was definitely a good name for these shoes, which were the first Nike’s to incorporate Nike+ basketball technology. 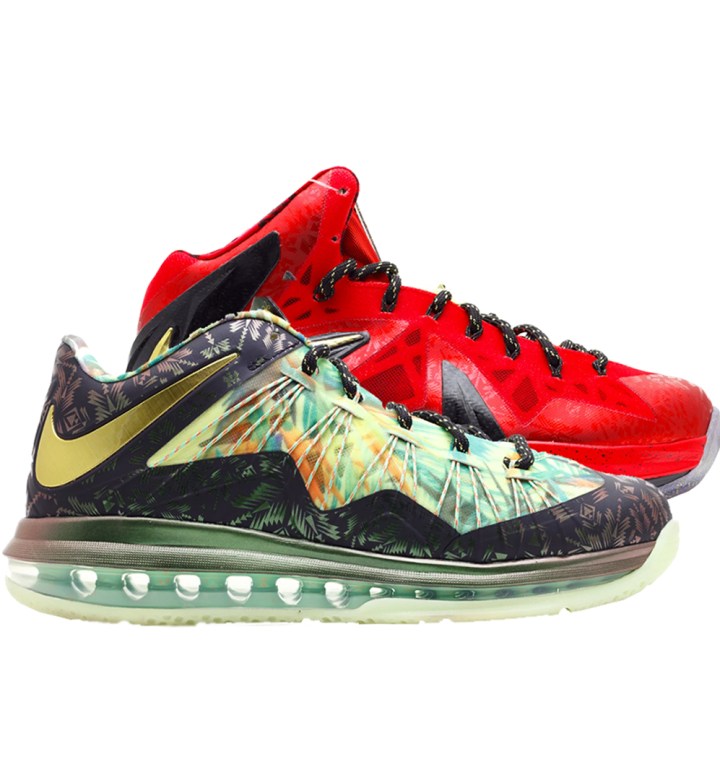 Not one, but two sneakers make up the Celebration Pack, which remain one of LeBron’s most coveted. Of course 2013 was the year LeBron locked in his second championship when the Heat defeated the San Antonio Spurs in a seven game series that was also a close call with a down to the wire Game 6 that the Heat could have lost had Ray Allen not hit that three to tie the game and send it into overtime, and an equally intense Game 7. The championship celebrations (pun not intended) were also pretty lit (yes we were enviously watching from afar). 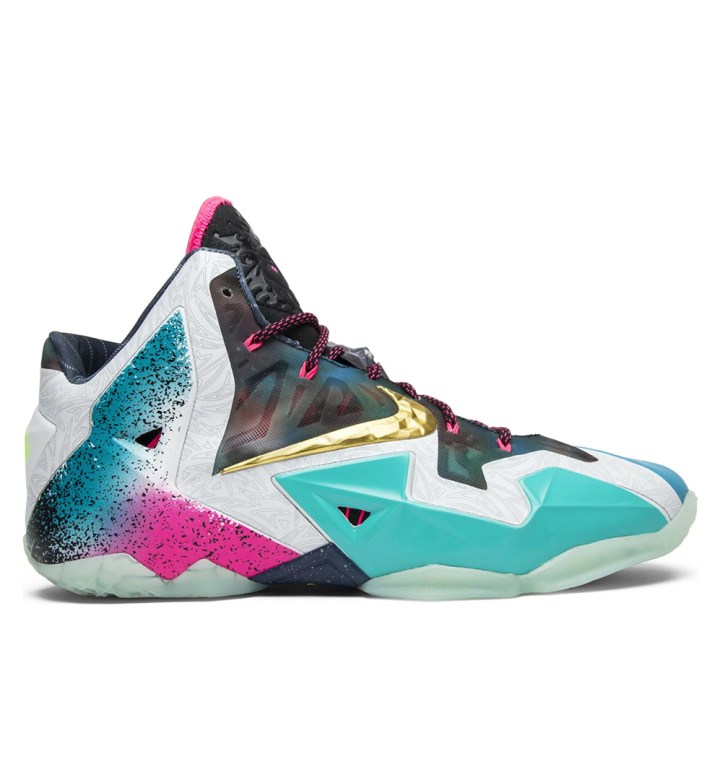 Okay so now we’re back in Cleveland for LeBron’s second go round with the team. Bron’s return to Cleveland was done in surprise fashion, but for those like myself who are die-hard Cavs fans, it wasn’t completely shocking because we (or atleast I) always knew that he would eventually come back to get Cleveland a championship, which he did. “What The LeBron” was released in September 2014 around the time of the announcement, and included features from previous signature releases, along with the map of Akron, Ohio. 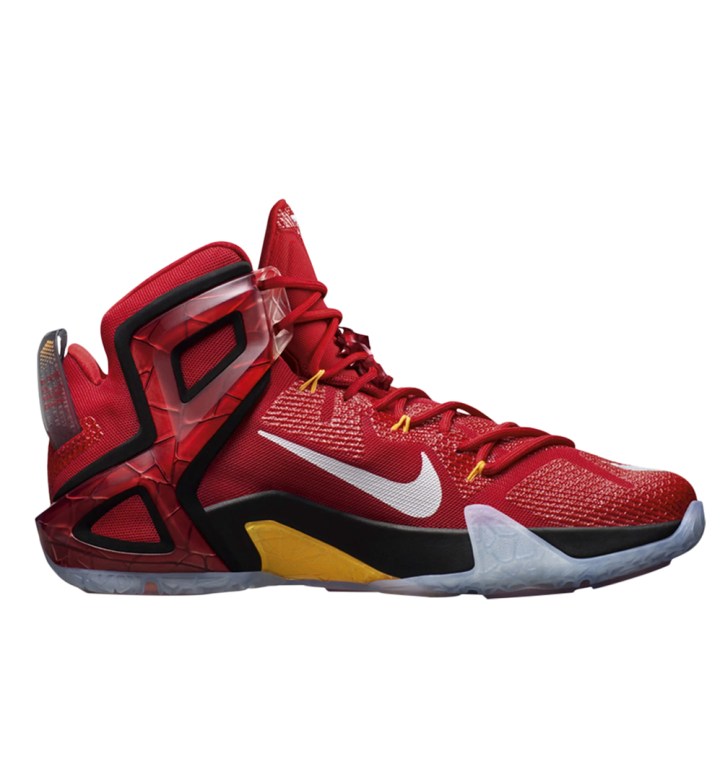 The “Ignite” LeBron 12s were first worn on foot by James during the Cavaliers playoff opener against the Boston Celtics. That game was significant because it was also both Kevin Love and Kyrie Irving’s playoff debut, and Cleveland’s first time being back in the playoffs since 2010, the end of his first tenure with the team where they played… the Celtics. The shoes (and the game they were worn in) would mark the beginning of an interesting playoff run where the Cavs ended up facing the Golden State Warriors for the first of their four year rivalry. 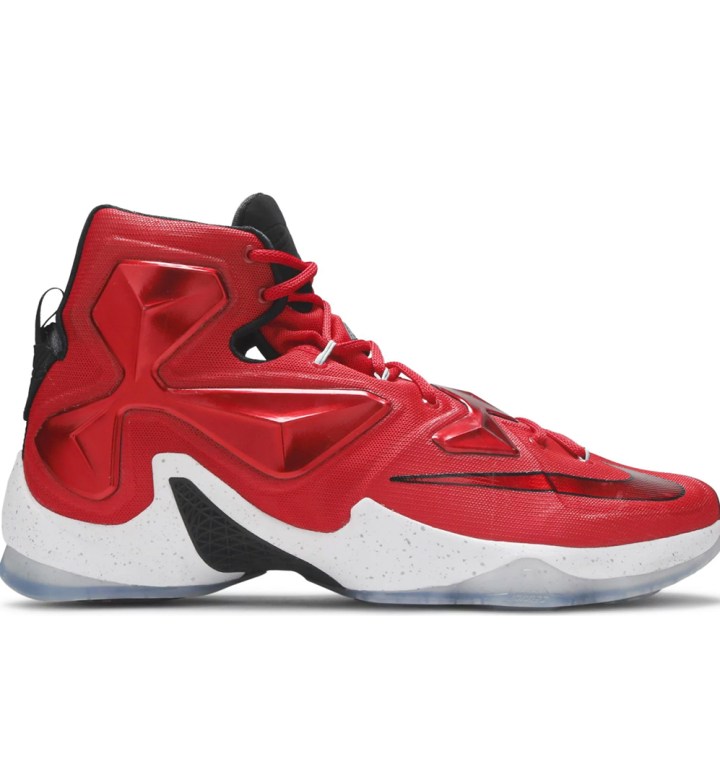 We’re now at the start of the 2015-2016 season, and the Cavs are coming off a disappointing 4-2 loss to the Golden State Warriors during a playoff campaign where they lost both Kevin Love and Kyrie Irving (who went down during Game 1 of the Finals). With everybody back healthy, it was time for round two.

Designed by Jason Petrie, the “On Court” LeBron 13s were released at the start of the season, and featured Flywire technology to go along with the red upper, asymmetrical lacing, and the black accents sprinkled throughout the shoe. 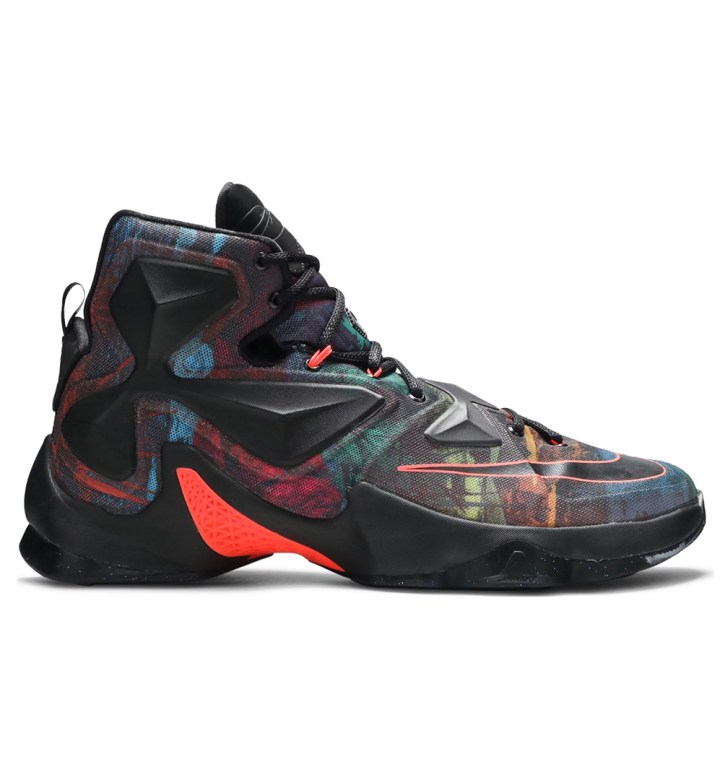 While these were released in November 2015, we still feel that these are the shoes that best represent the 2015-2016 season, which as you guys know, would be the year that LeBron would bring the championship to the Cleveland Cavaliers for the first time in history (and Akron by automatic default). Each of the five shades of the Akronite paid tribute to the various different chapters of LeBron’s journey up to that point, including his Akron roots, and his years in Miami.

And if the Akronite 13s sum up the season, then the Gold Swoosh Soldier 10s sum up the postseason. LeBron wore the White Gold iteration during the Cavs Game 6 matchup against the Golden State Warriors where he notched his second 41 point game in a row. Game 6 was the final game at the Cavs home base before Game 7 where they would complete their 3-1 comeback to win the ship. The Gold Swoosh 10s would go on to be released two months later. 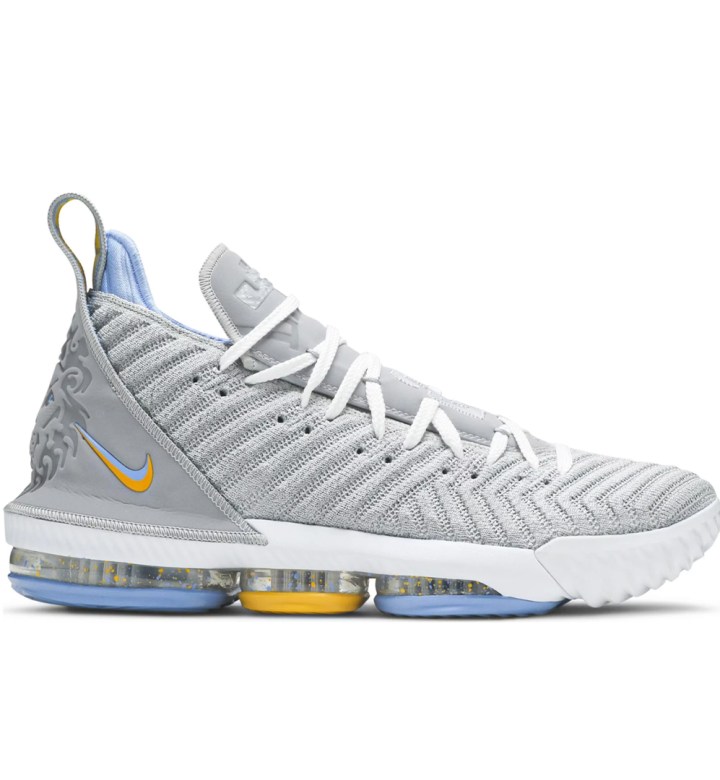 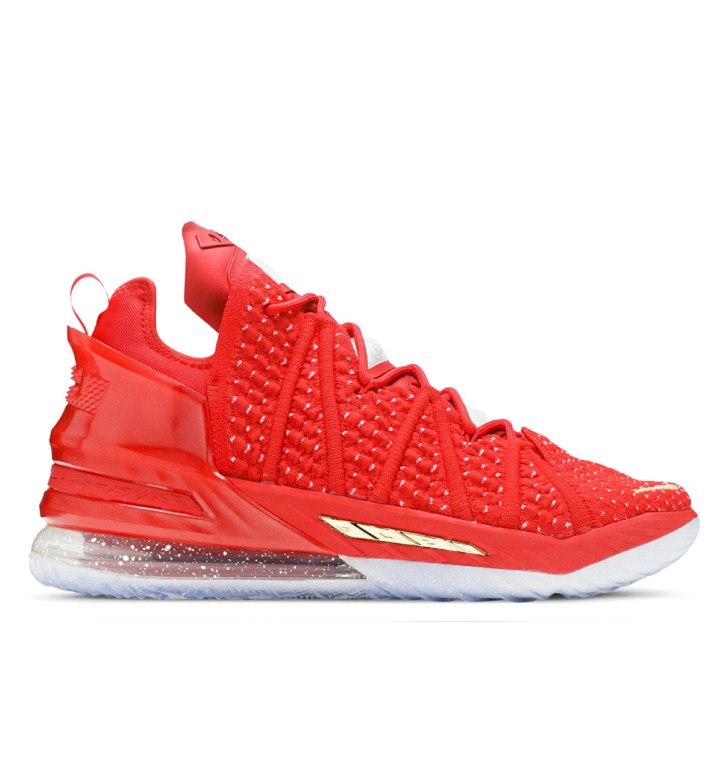 With the holiday season around the corner, we thought it would be fun to throw in one of LeBron’s sneakers. Red, fun, and festive. 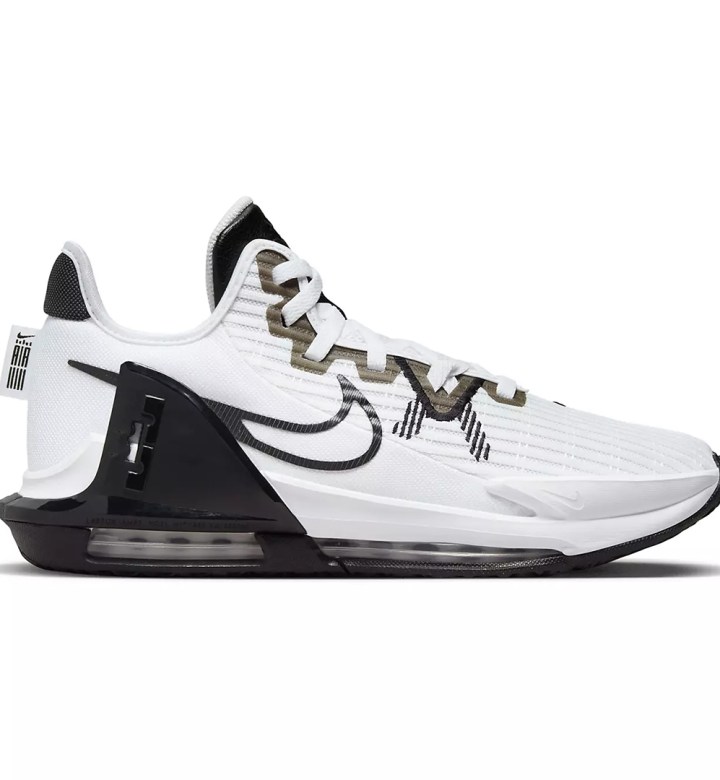 Simple. We all have been witnesses.

LeBron obviously has dozens more sneakers that you can check out. Be sure to follow us for more style articles and content.

In other LeBron news, continuing to celebrate LeBron James’ 20th year in the NBA and 20 years with Nike, Nike will release a new colorway of the signature LeBron XX (LeBron 20) this Sunday, December 4th. 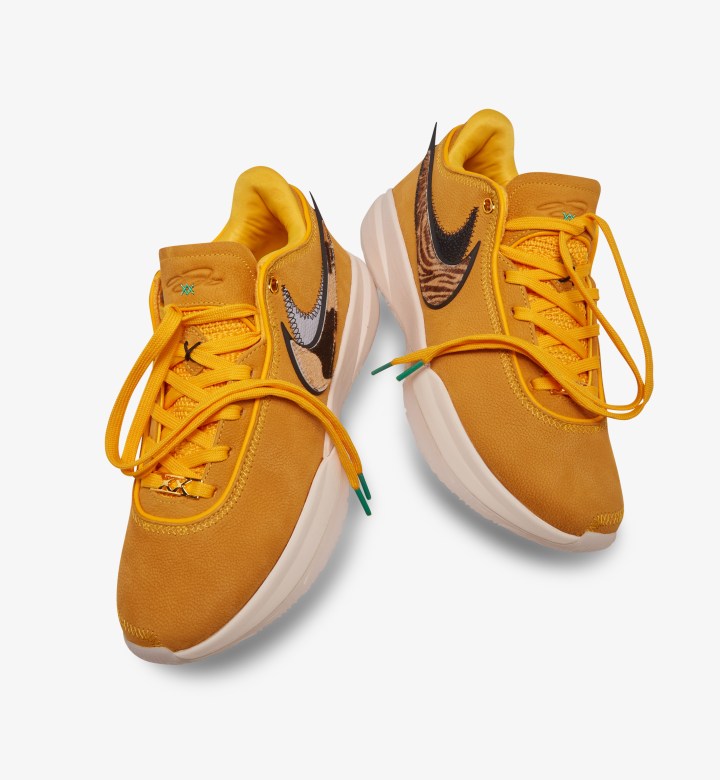 The latest colorway of the sleek, luxury inspired low-top silhouette will be available in a limited quantity of just 200 pairs exclusively at UNKNWN.com/releases. The new Releases structure is intended to create fairness for its digital community to access the most exciting and coveted product launches. To buy, fans must register a profile and sign up for the launch in advance. Winners will be selected at random resulting in the automatic purchase of the sneaker and be notified by email on the launch day.

Also launching this weekend and available at UNKNWN.com/releases is another new LeBron XX colorway in pink. 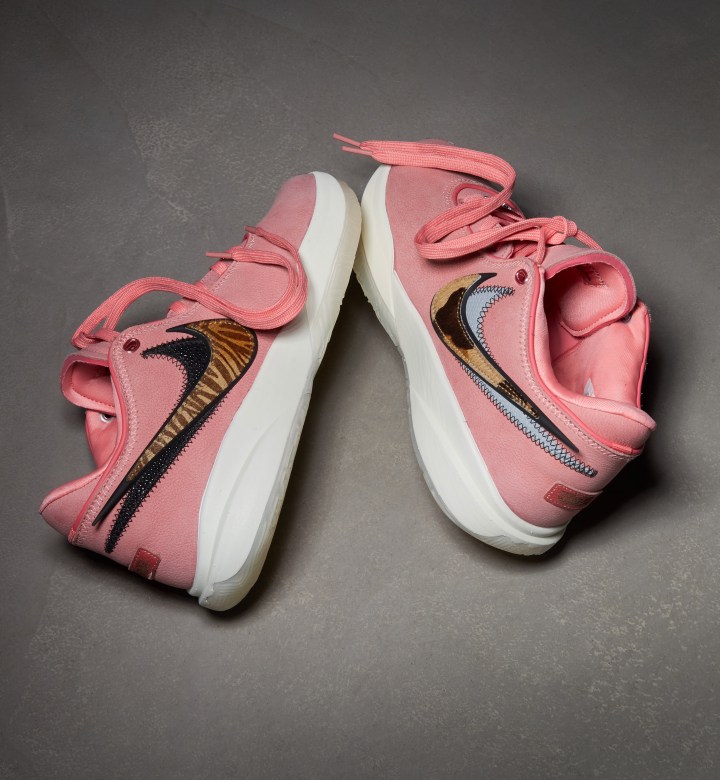