The best threads in the league. 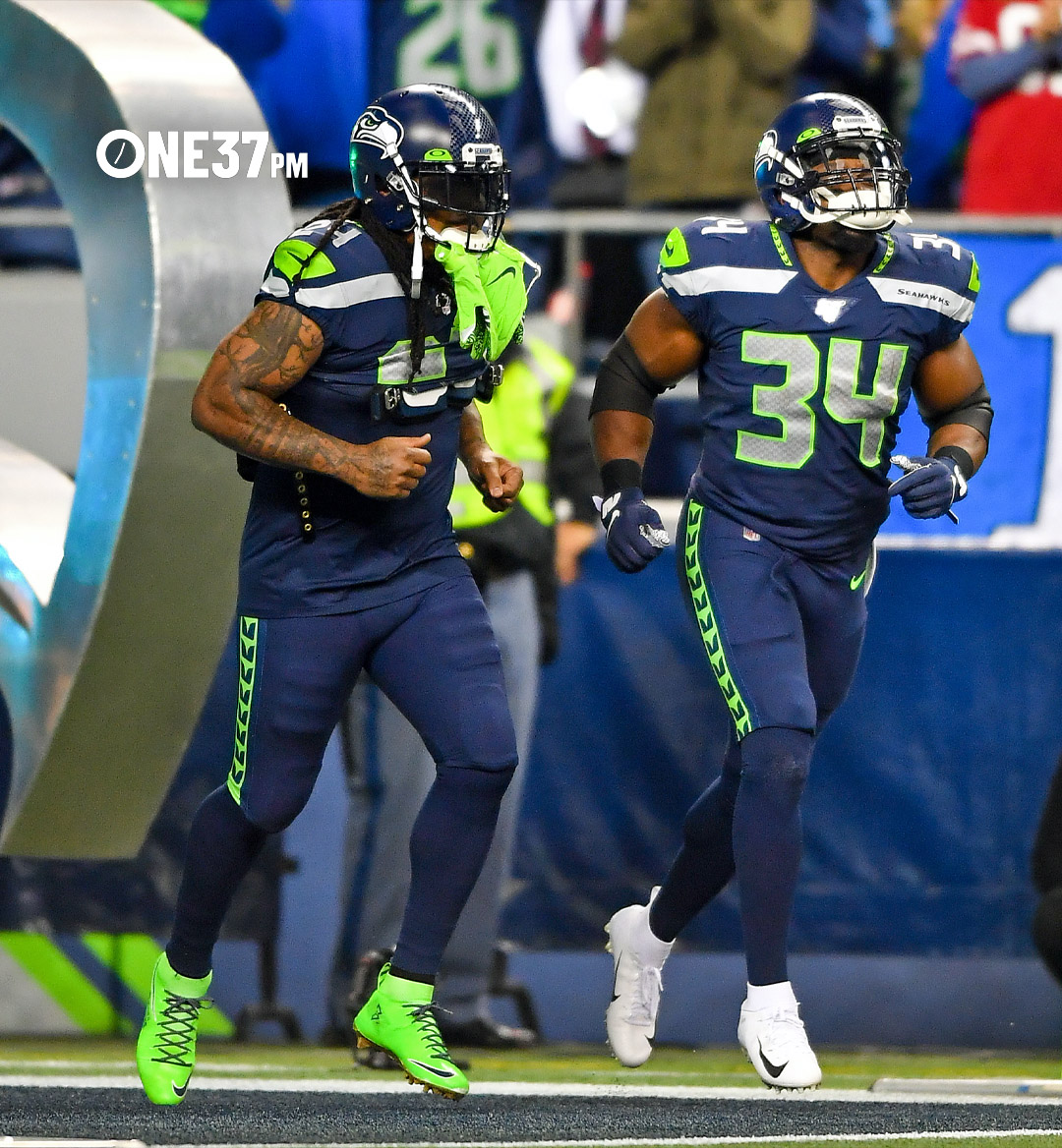 Black Friday is almost here, making it the perfect time to start thinking about copping your favorite NFL team's jersey. Here at ONE37pm, we are giving our take on some of the best that the league has to offer.

We based our picks solely on the color combinations and creativity of each team’s uniform combos this year, as well as the impact that a few uniforms have on the culture of their team, and how they represent the origins of their franchise. 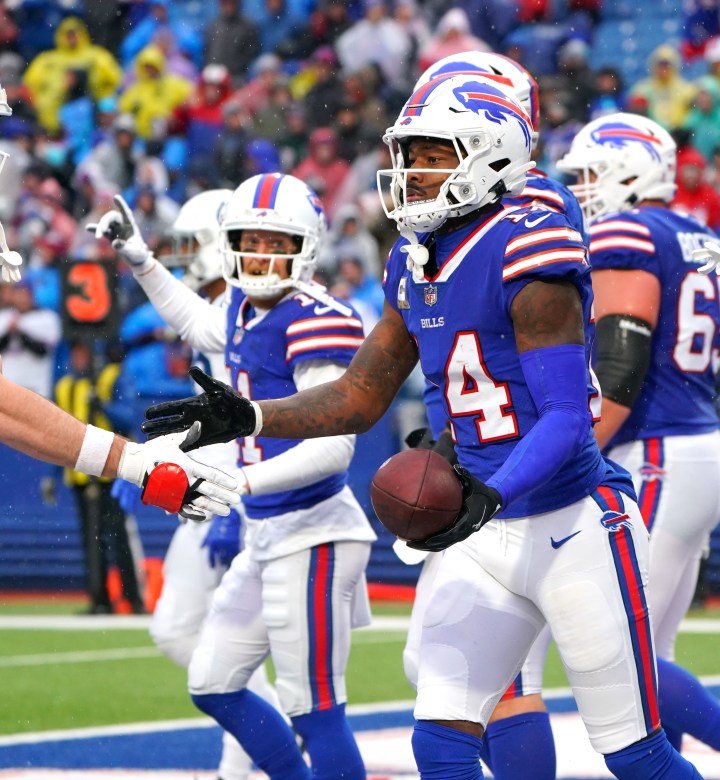 Stefon Diggs #14 of the Buffalo Bills celebrates a touchdown in the game against the Indianapolis Colts during the fourth quarter at Highmark Stadium on November 21, 2021 in Orchard Park, New York. (Photo by Kevin Hoffman/Getty Images) / Getty Images

Kicking this shin-dig off with the Buffalo Bills' pretty color scheme on their main home jerseys. The striped collar is professional, their logo is dope, and I really like the blue and white stripe running down the sides of the pants. They almost look like a superhero costume. 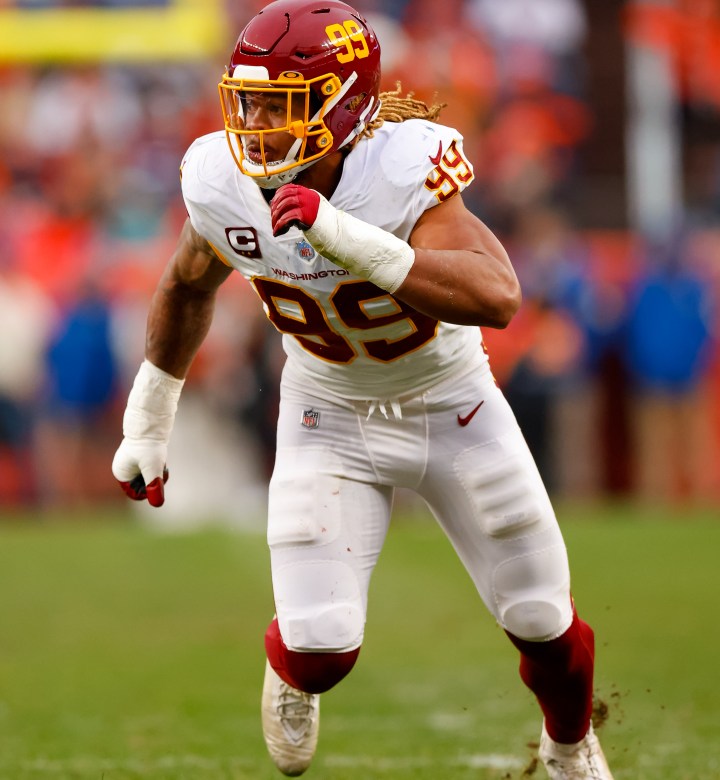 Yes, the Washington Commanders made this list, and rightfully so. I love the college vibe that they give off with several of their uniforms, and the yellow face mask is a great touch on this all-white look. Outlined in yellow and filled in with red, the numbers really pop off of these uniforms in a good way, and while they keep the helmet simple, it's a super cool look and great utilization of team colors. 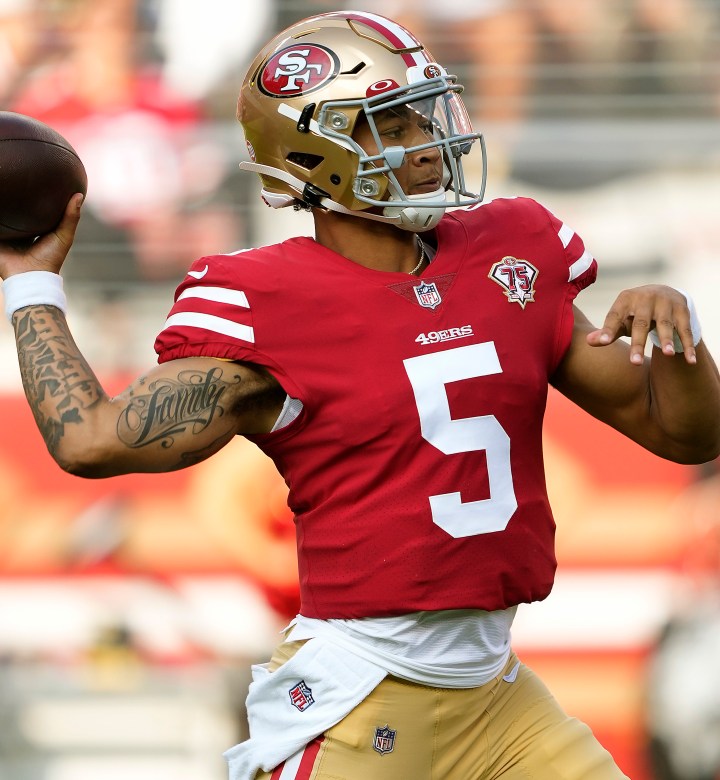 The San Francisco 49ers home uniforms are straight classy. There's so much to like about these threads—their bronze helmet with a red and white stripe streaking down the middle ranks among one of the best helmets in the entire NFL. The pant selection on this uniform combo is key, and they get extra points for matching their bronze helmet with bronze pants. You can't forget about their original red jerseys either, as the stripes on the shoulders are my favorite part of their tops. 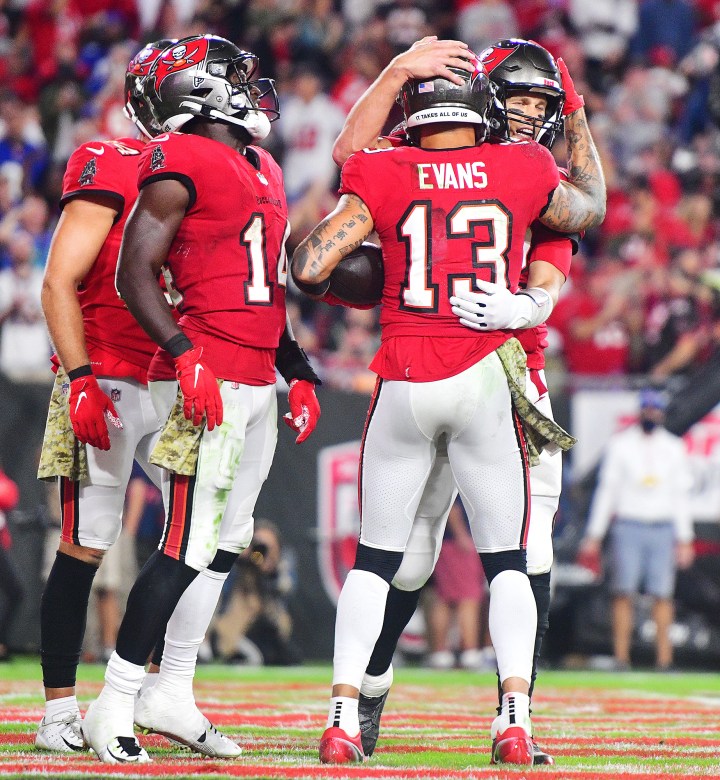 These bright red Buccaneers jerseys are mean as heck. Most teams in the NFL with a red and white color combo don't have a dark helmet, let alone a silver one, so I give the Bucs props for being different and pulling it off. The numbers and names are outlined very nicely as well, and the fact that they have two logos (the Bucs flag logo on the helmet and the black ship logo on the shoulder) certainly sets them apart from other teams. 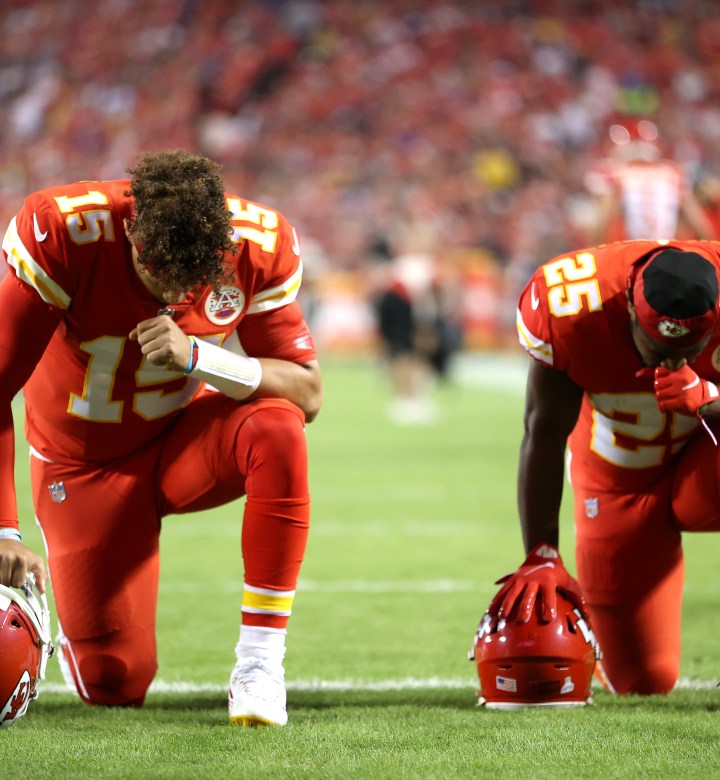 These are without a doubt the best look that the Kansas City Chiefs sport. Great utilization of their primary color on the jersey top and pants—I would like to see them utilize their gold color on their pant selection at some point but there's nothing wrong with keeping it simple. The white-colored numbers and names pop largely thanks to the gold outlining, while the identical stripes on the shoulders and socks add nice symmetry to this design. 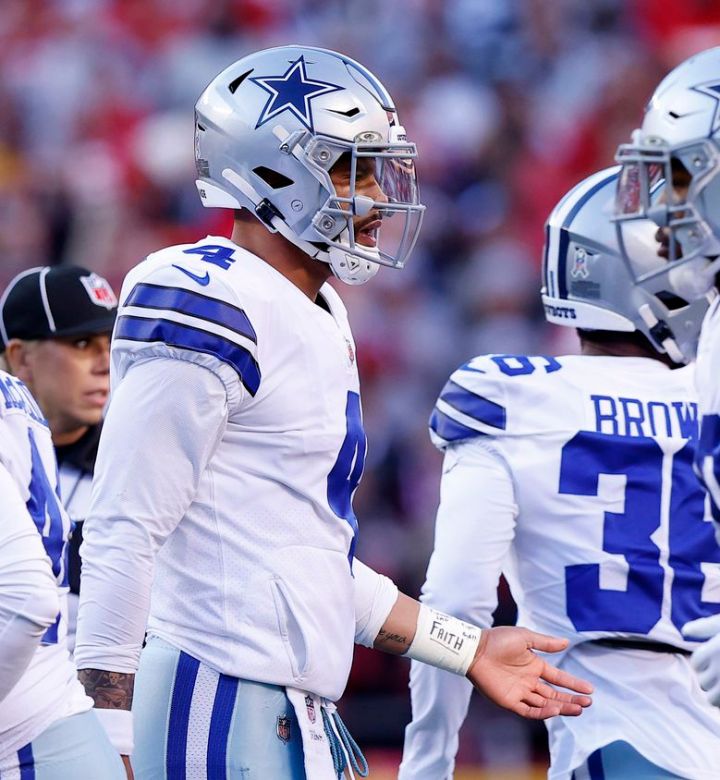 It'd be a cardinal sin to not include the Dallas Cowboys' classic home uniforms on this list. Much like the New York Yankees in baseball, the Cowboys are among the most hated teams in their respective league, so their uniforms definitely don't get the love that they deserve. This year, the Cowboys are bringing back a retro look for their Thanksgiving Day game against the New York Giants.

While all their looks are iconic, the white helmet with a blue star maintains a special spot in the league's visual history. Beyond just their special throwbacks for Thanksgiving, Dallas expertly incorporates a star motif throughout their jersey, specifically on the silver pants with white and blue stripes running down the side. It's different, and it slaps for America's Team. 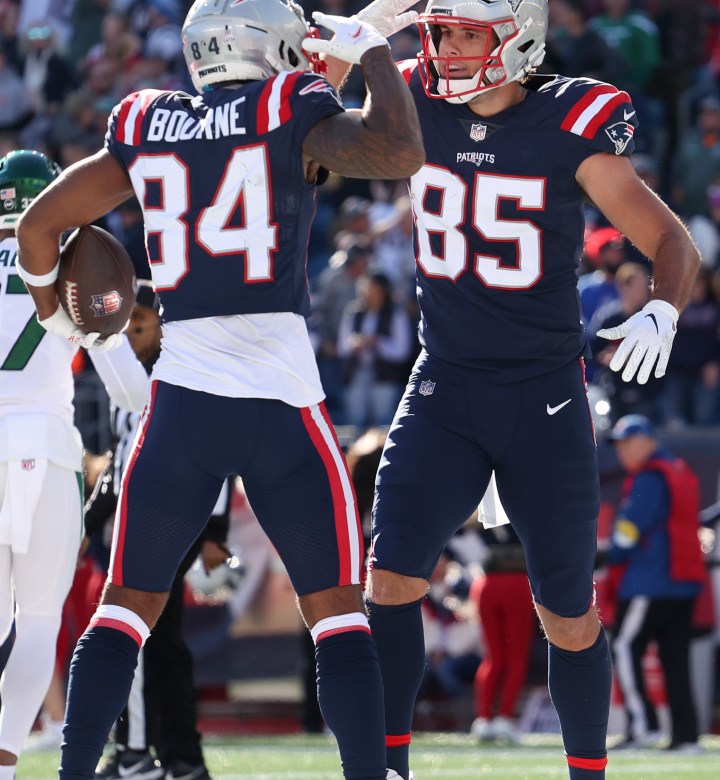 Hunter Henry #85 of the New England Patriots celebrates with Kendrick Bourne #84 after a touchdown during the first half in the game against the New York Jets at Gillette Stadium on October 24, 2021 in Foxborough, Massachusetts. (Photo by Maddie Meyer/Getty Images) / Getty Images

They're not America's team, but the New England Patriots certainly do red, white and blue justice in these threads. The dark blue tops and bottoms, along with the red outlining allows the numbers and names to really jump off these uniforms, while their grey helmet and logo will always be an NFL classic. 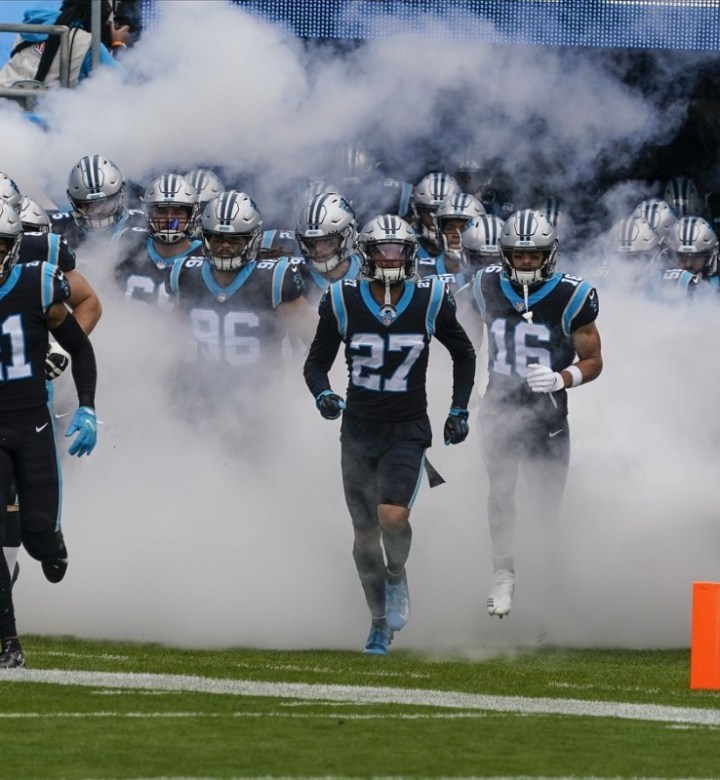 Carolina's black on black boo-ya! The subtle light blue trip going across the collar and shoulders still allows the black to rightfully dominate the Panthers alternate home look, but reminds fans that Carolina blue is one of the prettiest colors in the world and that it looks great next to black. 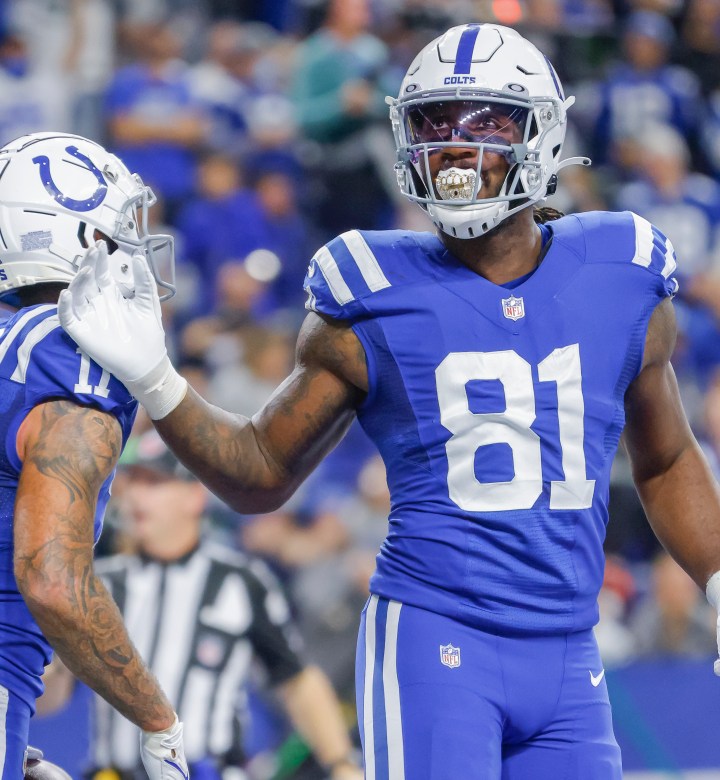 The Colts blue on blue unis with their patented horseshoe logo is a simple look, but it's still a hard one. Indy has one of the prettiest color combos in the league, and while lot of their uniforms popularity can be attributed to the excellence of the Peyton Manning led teams, there's no denying that they sport a very appealing look. The white helmet with the blue stripe going down the middle is my favorite part of this uniform. 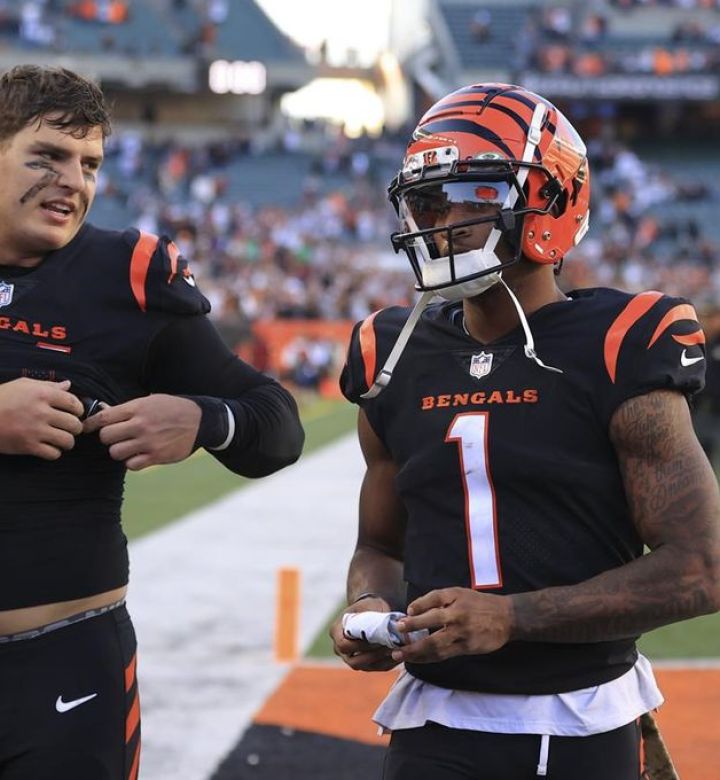 This season, with the Bengals playing better football than they have in the past, their black on black uni combo with orange and black cat stripes are their best thread, and are usually overlooked. Orange and black would seem like a difficult color combination to pull off, but I think the Bengal theme allows Cincinnati to make it look super cool. These helmets are definitely top 5 in the NFL as well—and their special white versions hit even harder. 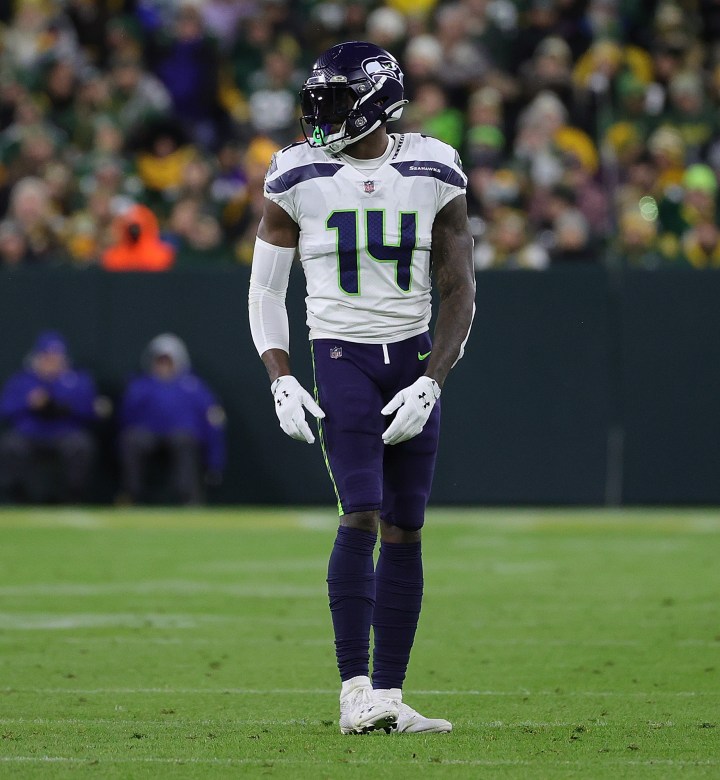 The green highlight on this white top is arguably the most dynamic aspect of any uniform in the entire league. The more I look at Hulk-like figure D.K Metcalf in this thread, the higher I want to rank these Seattle Seahawks uniforms. With that being said, one player's ability to make a uniform look better should not elevate the uniform alone. Nonetheless, the Seahawks utilize their dark blue in 10/10 fashion, and do a great job of taking these away uniforms to next-level swag. 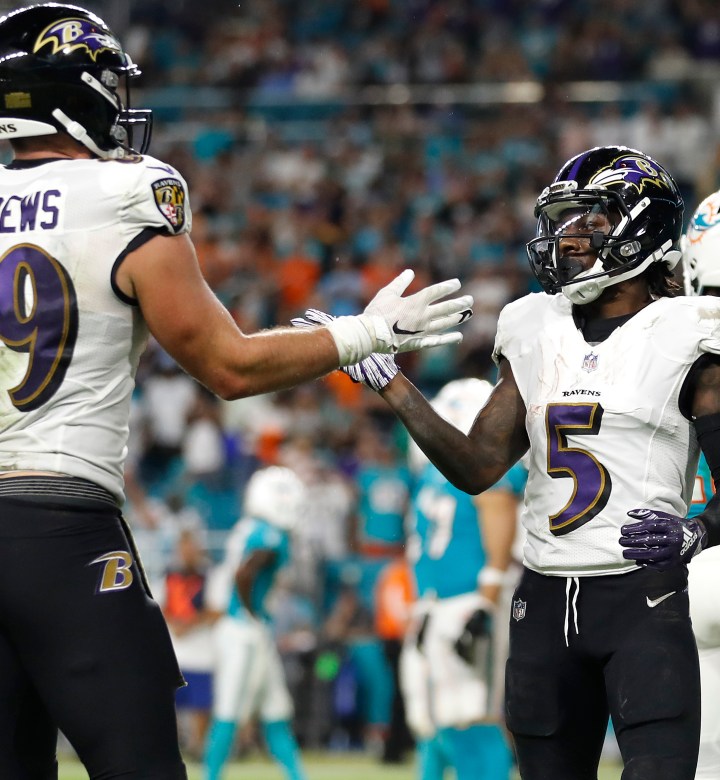 NOVEMBER 11: Mark Andrews #89 of the Baltimore Ravens celebrates with Marquise Brown #5 catching a touchdown reception against the Miami Dolphins during the fourth quarter at Hard Rock Stadium on November 11, 2021 in Miami Gardens, Florida. (Photo by Michael Reaves/Getty Images) / Getty Images

The swag of the Ravens squad might attribute to why these uniforms are so highly regarded as one of the best in the league. Even so, Big Truzz utilizes their purple and gold to make one of the most recognizable uniform numbers in the league. They get extra points for matching a black helmet with black pants too, but it's their use of their primary purple color that really sets this uniform apart from so many others. Oh, and their super dope logo. 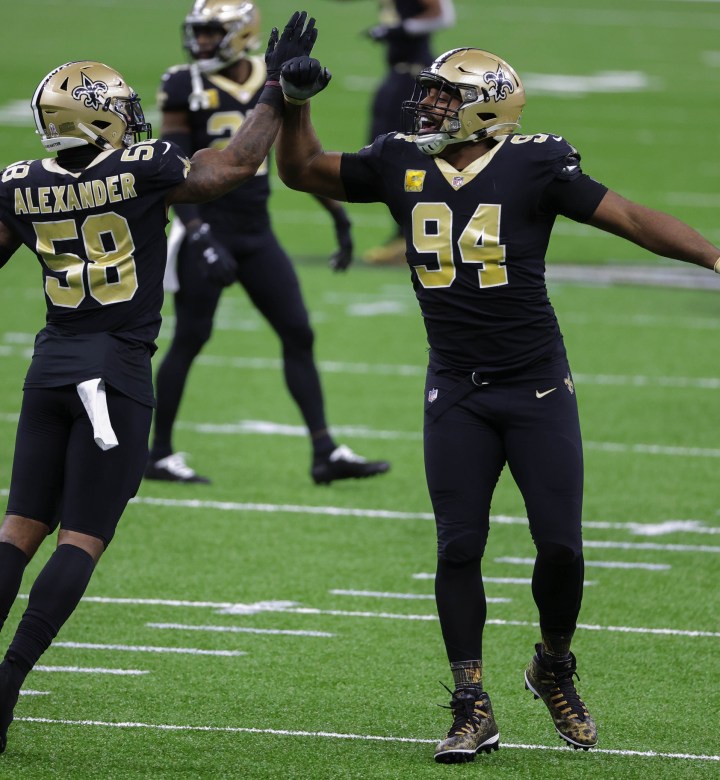 The Saints mean business in these threads. The black on black jersey-pants combo with dark gold numbering is fire & the Saints classic emblem planted on the helmet slaps too. To an extent, a team's success should play into how attractive a uniform is, and everyone knows that when the Saints showed up to the Superdome in these, they were dropping 50 on you. 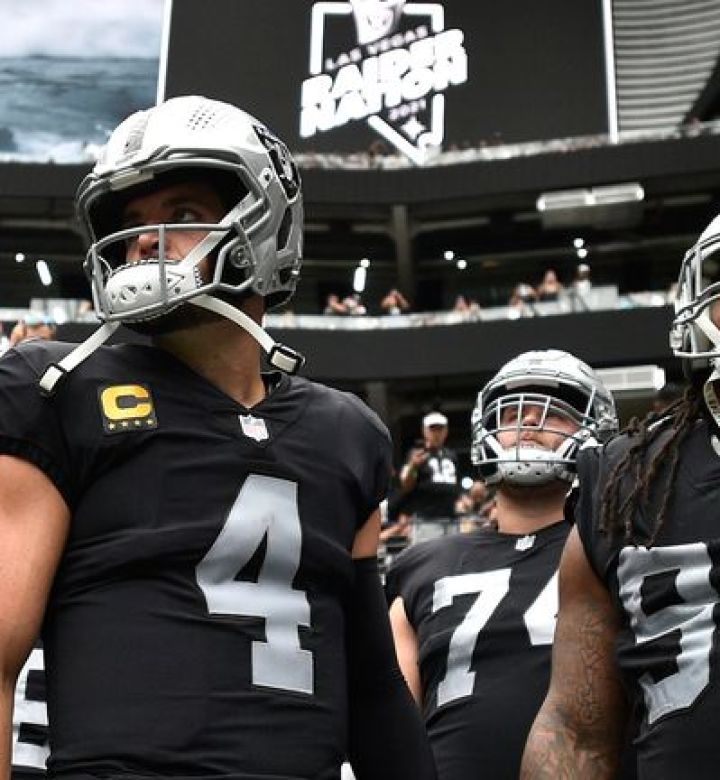 No one vibes old school better than the Raiders. Their black tops, grey helmets, and bottoms are an NFL classic and can be incredibly intimidating when teams have to visit a raucous Raider nation. Not only is this a classic NFL look, but the Raiders' black threads actually evaluate the culture of the entire team, which is rare, and why I hold LV's uniforms in such high regard. 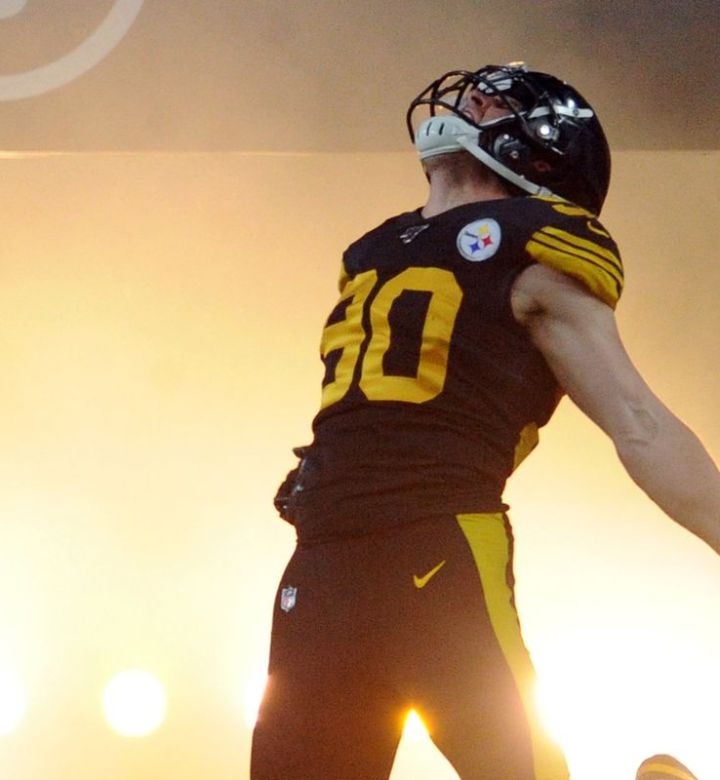 While their standard-issue home jersey is one of the league's most famous looks, Pitt's Color Rush jerseys are on a whole different level. The black lining and yellow stripes going down the pants will remind fans of the franchise's origins, while the black jersey and black pants combinations add something different to the mix. Once again, the fact that the Steelers are one of the most legendary franchises in the NFL elevates this modernized version to one of the best in the league. 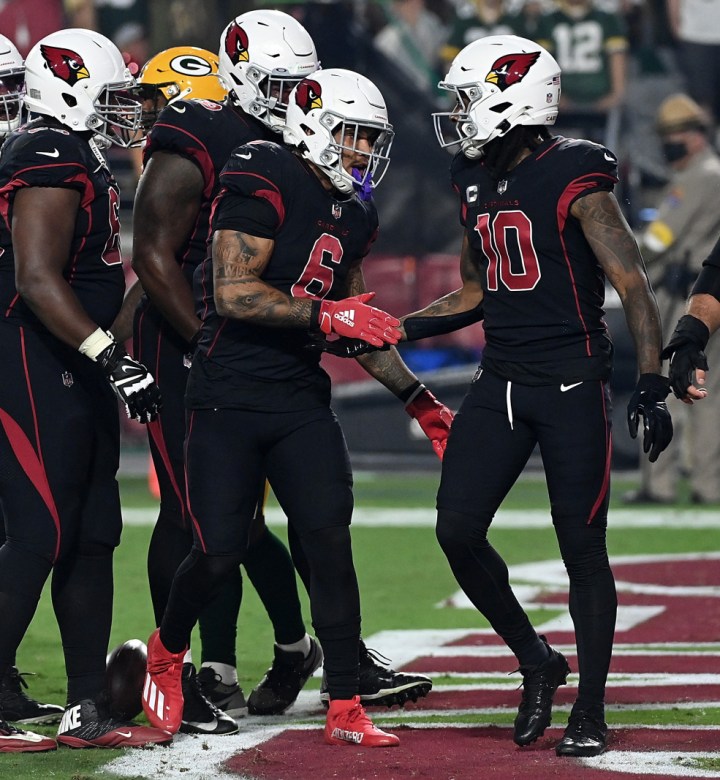 The Arizona Cardinals' black-on-red uniforms are supremely underrated. Much like franchise quarterback Kyler Murray, these black threads with red stripes streaking down the sides have fast and furious written all over them. The Cardinals logo really pops off of the white colored helmet as well, and nobody rocks a white helmet better than the Cardinals do in this look. 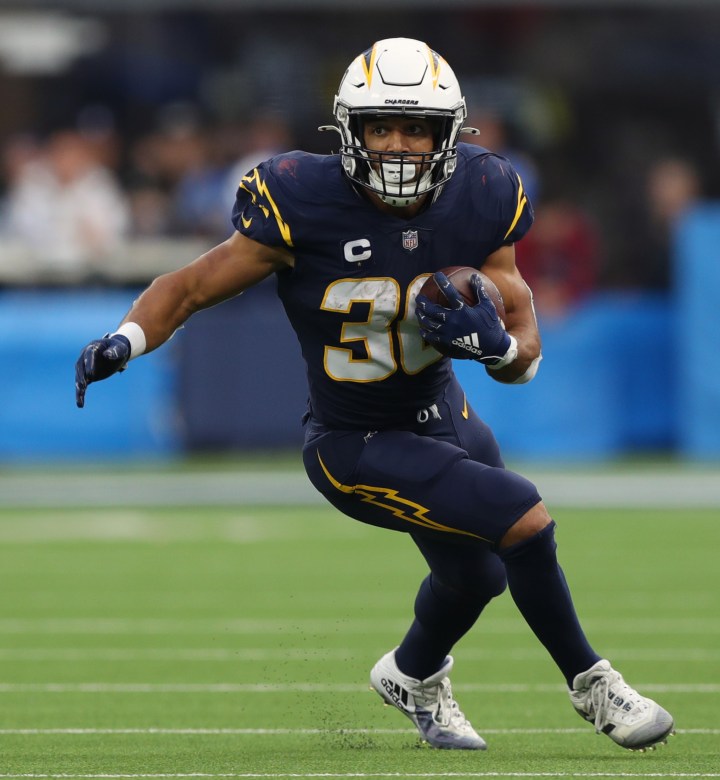 LA, Y'all went crazy on this one. The blue, white, and gold color combination is devastating, while the eye-popping lighting bolt logo adds fuel to this fire kit. This uniform is without a doubt the cleanest in the game, and you should definitely go cop one to watch Justin Herbert and the Chargers in style.