Florence Black is a British Luxury Label With a Vintage Vibe 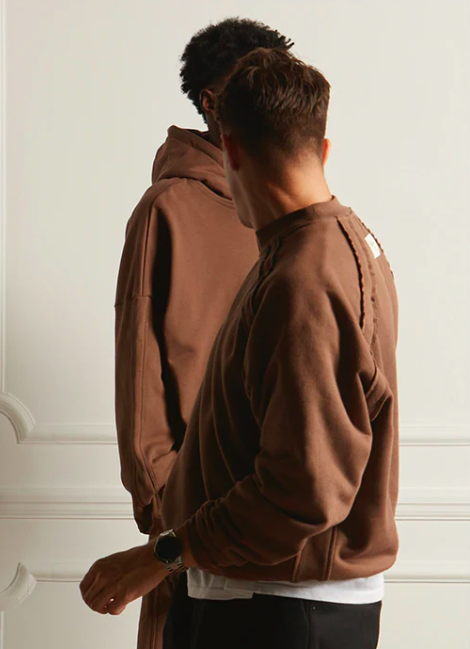 Happy 2023 everyone! As we kick off this fresh new year of fashion, we’re highlighting a brand that experienced great success in 2022. If you haven’t already heard of Florence Black, then you will soon as they are on their way to becoming one of the top U.K. brands. Known for blending street fashion with a slight punk edge, the brand was founded by designer and creative director Finn Lewis in 2018, stemming from a culmination of his childhood experiences and love of classic timeless styles.

In the five years since, Florence Black has gone from being the new kids on the block, to industry vets that are very much booked and busy. Ahead of the new year, we caught up with Finn to talk more about Florence Black, their upcoming creative endeavors, and what personally inspires his work. You can check out the full interview below.

Lewis: Actually slightly before that! The brand idea had been around a few years before that, we even released a few t-shirts and jumpers in 2017, but this wasn't a 'brand' then. It wasn't until after taking a year of further development & factory/fabric sourcing when we released our first real collection in 2018. That's when we became 'established'.

ONE37pm: Talk to us about the differences in the brand between then and now. How have you guys evolved since then?

Lewis: Huge, literally monumental. I actually do look back sometimes and cringe a little bit because you can literally see everything I was doing wrong, it was a lot. Coming from a styling background, I always knew what I wanted as far as a final look was concerned, but to really have a solid understanding of product development, fabric sourcing, shoot direction etc.

This would take years & years learning from the best, taking on board anything they could teach me and advice on how to improve. I had to let go of the ego pretty quickly, & I was very lucky to get good factories and suppliers around me who could give me that guidance, especially at that early stage of a brand.

Then when you look at the brand now, the team I have around me, the direction we are heading, absolutely incredible. I used to get really worried about the future of the brand, but now I'm so excited. I'm getting to build my own brand, I'm getting to meet some pretty amazing people in the process. Now having a larger budget to build bigger and better collections & campaigns helps me realize my vision too.

ONE37pm: Now you said there’s been an explosion in the recent attention you guys have been getting correct? What has that looked like for you?

Lewis: Almost uncontrollable, the recent attention has propelled the brand size x 3 / x 4. That amount of growth in a small amount of time has obviously come with its issues. Getting good people round me who I can trust has been the most crucial step. Sounds so cliche, like it belongs in a motivational youtube video, but until you go through it, you realize how true that is. Being able to 'hand off your baby' is very difficult, especially when you have been involved in absolutely everything to do with the business up until that point is hard.

ONE37pm: I would imagine there is a steep learning curve for this next step of the business, how are you managing that personally?

Lewis: Work solid, burnout, work solid, burnout, rinse repeat haha! I would by no means try to romanticize this process or pretend that it's anything other than a disgusting slog.I think the most difficult part for me isn't the learning, I'm happy to learn and absorb information. For me it's the time in the day I have to get work done. Having my offshore work, as well as the brand, trying to train twice a day & then have some form of social life, as well as sorting the flat out during my recent move to London, so on and so forth.

ONE37pm: You also work offshore & train twice a day? How do you find the time?!?

Lewis: By sacrificing downtime currently, spending less time 'sitting about' watching TV or scrolling through instagram, instead utilizing any spare time I have working or working out. Training goes hand-in-hand with productivity in business. A healthy body and healthy mind is much more efficient. There's definitely an element of vanity in there as well, I can admit that, especially being younger and single I think most guys want to look their peak at this age. Cram as much into a day as possible basically!

This is where recently getting a good executive assistant has already started to pay dividends. I'm sure Louise will hate me by the time the year is out, but she knows everything's a balancing act for me at the minute, and how crucial she will be.

ONE37pm: So what do you do when you have a mental fog? How do you get out of that?

Lewis: Speaking to peers, I've found when you talk about certain issues, personal or business, out loud to someone you kind of piece things together yourself literally as you're discussing it. Last but probably the most important for me is music. If my head is mush, the headphones or speaker go louder, I let that influence me. Music is my sure fire way to get me into a certain mood or head space.