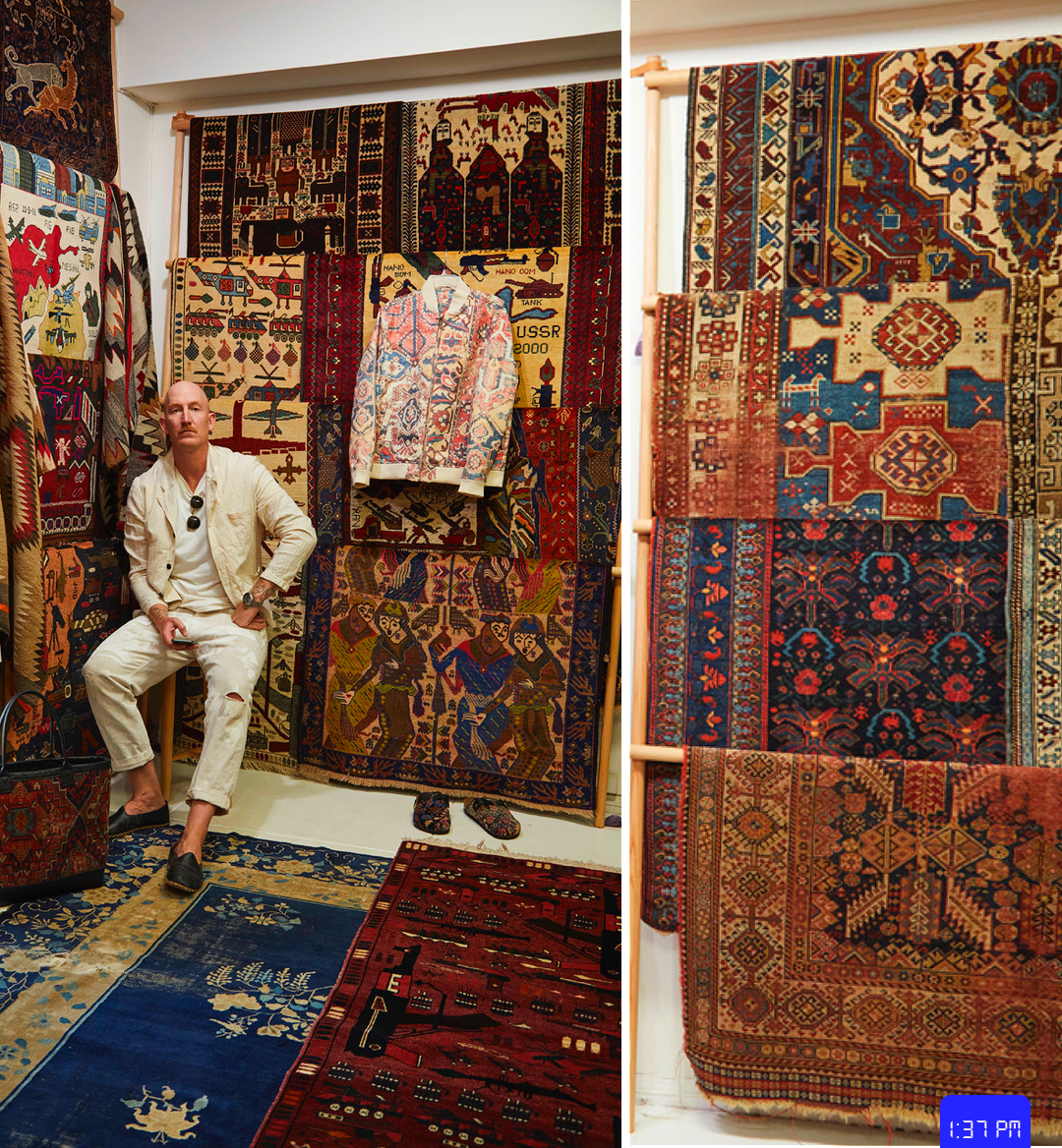 So much of our fascination with hand-crafted materials is the knowledge of the rituals that went into their creation. Rugs are much more than simple room decorations; they’re story-telling vessels, each one containing a long history of traditions and themes woven into their very fibers. As the pandemic forced many of us to re-emphasize our commitment to our homes, an interest in interior decoration and design has exploded.

We sat down with one of LA’s preeminent rug dealers to talk about the myriad of meanings we can concoct out of something as simple as the fabric adorning our floors. Mikael Kennedy is the founder of King Kennedy rugs. This is the story of how he went from fashion photographer to rug dealer.

From the moment our conversation begins, I am keenly aware of Mikael’s infatuation with his work. He never speaks of the rugs with regard to their use within a space. Instead, speaking with Mikael resembles speaking to an art dealer, overflowing with excitement over the craft that they get to work alongside every day.

Mikael has worn many hats, one of which being that of a fashion photographer. His nascent fascination with rugs came about throughout his time as a photographer, interacting with meticulously curated homes across the nation. “During the course of my wanderings a photographer, I would come across these rugs in people’s houses,” Mikael tells me, referencing pieces he would see during shoots for Ralph Lauren and other major brands. But there was one issue. “No one knew where to get them,” says Mikael.

By chance, Mikael met a rug dealer in western Massachusetts around this time. The dealer was on his way to retirement, and Mikael purchased ten rugs to dip his toes into the game. He brought the first batch of ten back down to NY (in his now viral Mercedes) and flipped them in a week. The demand was clearly there.

So from there on out, Mikael would always travel for work with an empty duffel bag. Whenever he went to a new town, he would find the local rug dealer and do his best to schmooze his way into the back room, to get his hands on the good stuff. “I think at the beginning, they found me humorous,” Mikael chuckles to me, regarding the understandable hesitation some of these old guard dealers would have around Kennedy in his early days. But once he proved his knowledge and commitment to the craft, they began to open up. Many of these connections have blossomed and developed into years-long friendships.

Years later, through these disparate connections nationwide, Kennedy has established a network of rug dealers that now spans across the globe. Despite their incredible value in the US, Persian rugs can’t be legally imported from Iran, so all of the Persian rugs you see in the US today have simply been exchanged domestically for decades. Mikael has his Persian rug dealers in the US, and then has a network of dealers internationally as well. He’s got two primary dealers in Islamabad, Pakistan for his Afghan imports, among others. These dealers, who work closely with the weavers, are the source of many of his pictorial and war rugs, which have become increasingly sought after commodities in the US.

One of his Islamabad dealers also helped him find these vintage car rugs from brands like Mercedes and Land Rover. “I bought every car rug in Islamabad,” says Mikael. Browse the incredible collection on his website. He tells me a delightful story about seeing a lowrider crew in LA last summer comprised entirely of Nissans and giving them his roster of rugs from the Japanese brand. They needed them more than he. 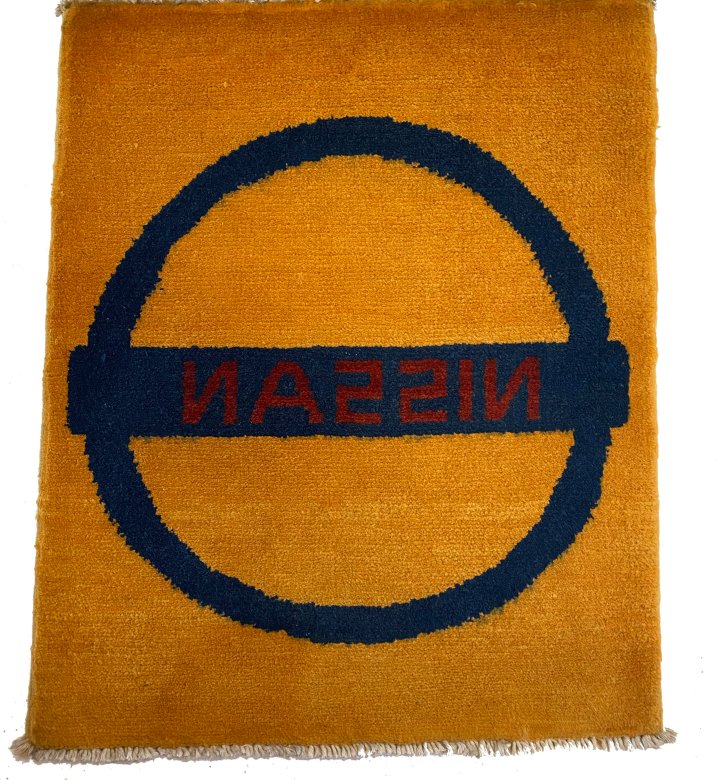 Cars have remained prominent in a lot of Kennedy’s styling of his collections and his onset into the world of high-end rugs. “My early artwork was based on American nomad traveling,” Mikael tells me, adding that he lived a very Kerouacian lifestyle in the 90s, road tripping and traveling around the nation. “The road has always been a driving force in my life and my photographic artwork,” says Kennedy, adding: “I think a car should be more than a car to people. It should be treated like a sculpture.”

This conversation is driven (pun intended) by my personal interest in one of Kennedy's most viral posts of all time, featuring the 1980 Mercedes 300SD that Mikael reupholstered with vintage rugs.

This was the car that carried his first fateful collection of ten rugs, and he’s now had it for 13 years. “The car is a character more than just an object,” Mikael tells me, again returning to the notion of cars and objects carrying their histories with them.

This brings us to the rugs themselves and the meaning imbued within them. So many of the Afghan rugs that makes up King Kennedy’s collection are rife with war imagery and other motifs you wouldn’t necessarily anticipate in a floor decoration. From his experiences with the dealers and weavers, Mikael was able to provide a bit more clarity around how certain symbols have entered the weaving process. “The Afghan weavers have been weaving their existence for a really long time,” he tells me, adding: “In ‘79, the Russians invaded and the country was invaded by war, and more or less has been since.”

The rugs are maps of human existence.

So all of this iconography coursing through the rugs is representative of the experience of the weavers creating them. For example, the numerology “256” appears on many of the war rugs. Mikael spoke with his Islamabad dealer Raheem about the reasoning, to which “Raheem told [me] the Apache helicopter is the most advanced war machine, it can target 256 targets at one time.” Each icon has a story.

But war rugs are far from the only pictorial pieces in the King Kennedy collection. One of the other extremely prevalent themes in the woven Afghan rugs is the Shikargah designs, which depict hunting scenes and other scenes from the culture they were created in. The Laila Majnu rugs, for example, present a story of star-crossed lovers. 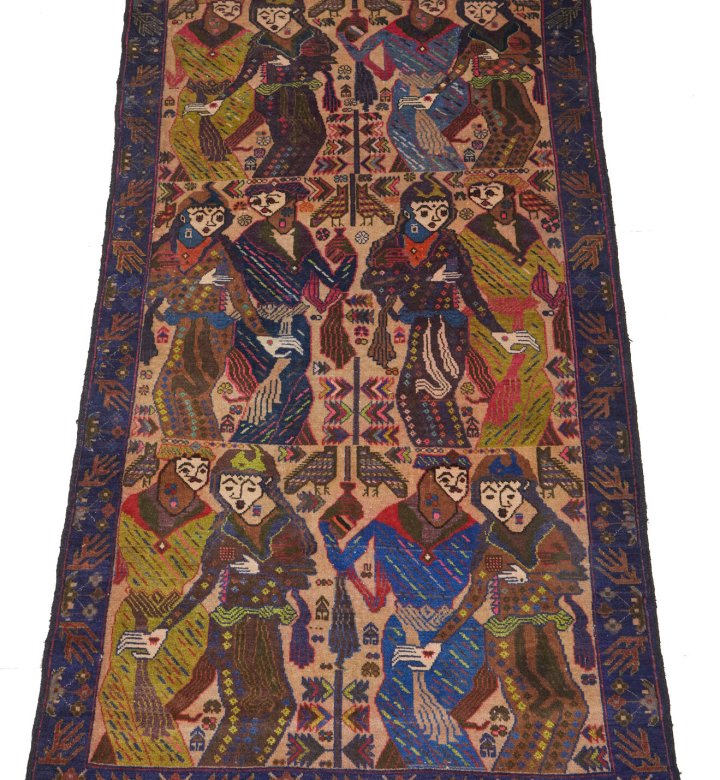 Especially in an era oversaturated with burgeoning rug designers, I was curious to hear a bit more about how Mikael makes the selections for his collection. “I only buy rugs that I want to keep.” he tells me. The primary through-line in Mikael’s selection process is his commitment to viewing the rugs as not antiques, but works of art.

These are paintings that you put on the floor.

Every item offered by King Kennedy is clearly selected by Mikael, and when speaking with him you can feel his personal connection to certain pieces in the collections. I ask him what his favorite rug he ever sold was, and he describes a Turkish prayer rug to me as “one of the most ornately designed prayer rugs I’ve ever seen.” That’s the one issue with being an art collector; you have to say goodbye to some of the things you grow to love. “I sold it to a collector, and to this day I keep trying to buy it back from him,” says Kennedy. 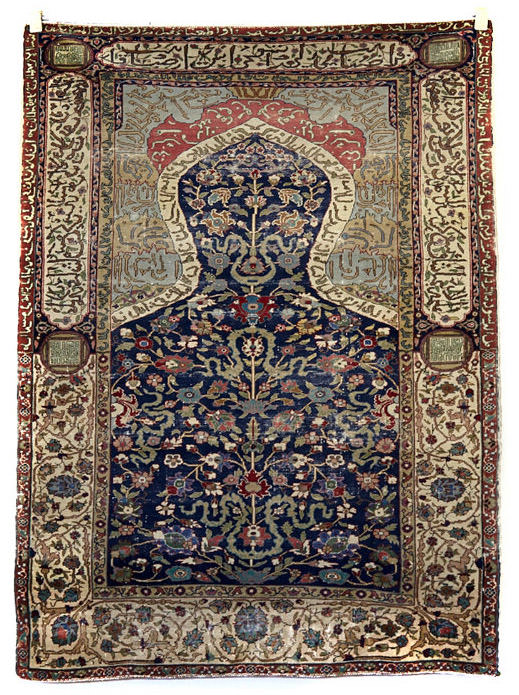 The future for King Kennedy is bright, as he has become a go-to rug dealer in LA and has numerous projects in the works. King Kennedy is planning to launch a clothing line utilizing material scavenged from vintage rugs, in addition to the continuous practice of importing, trading and selling the rugs that catch Mikael's eye.

Keep up with King Kennedy on IG, as the page provides insight into the myriad of textural and aesthetic inspirations driving the brand forward.

"If this fails, I want to just have the greatest rug collection," Mikael jokes to me. It's a good backup plan, but after our conversation, it's clear he doesn't need to worry.