The Fear of God x Nike Collection Just Dropped, Here's What You Need to Know 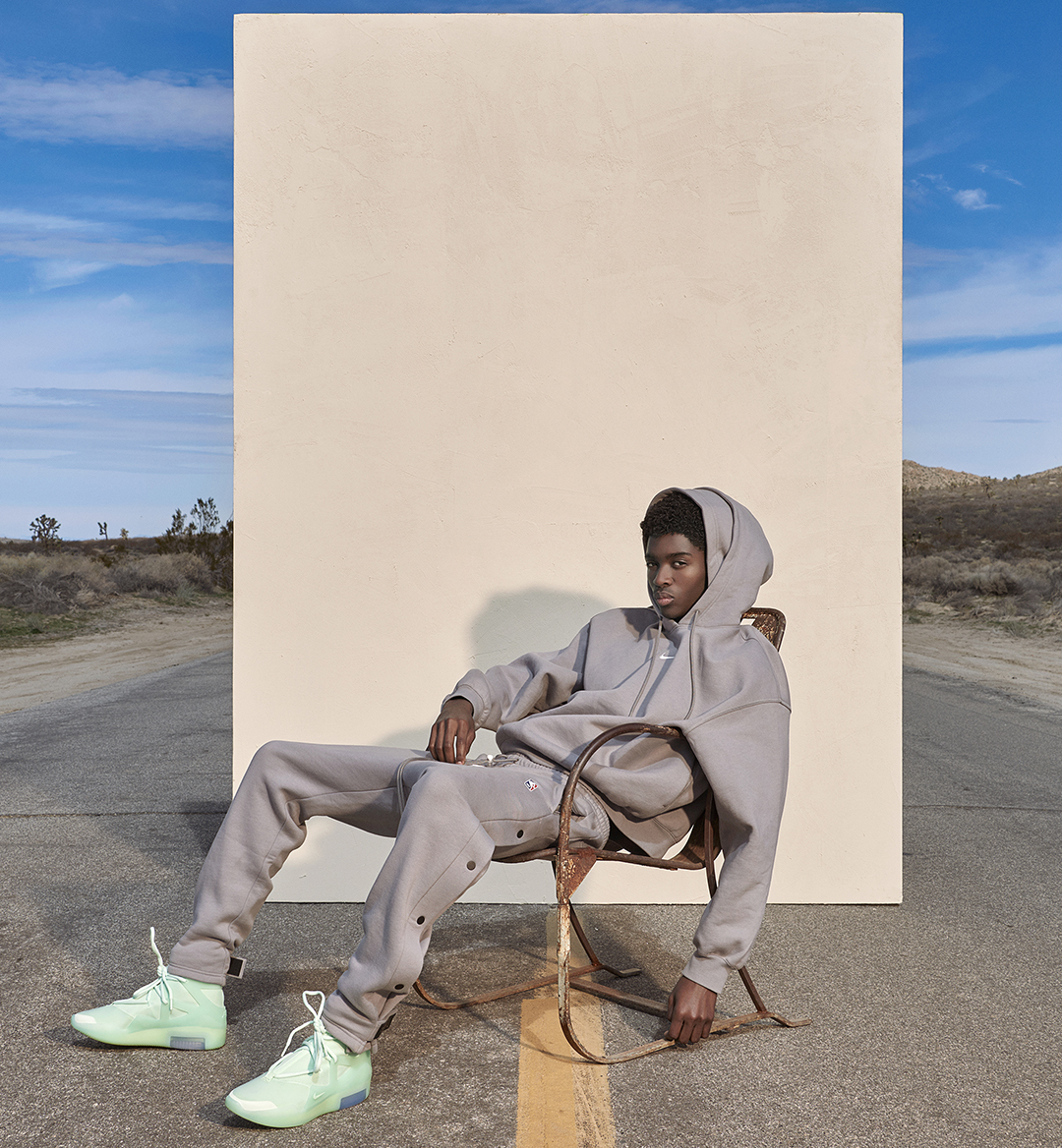 Compounding effortless cool with a seamless understanding of contemporary fashion, Jerry Lorenzo, a 42-year-old Los Angeles–based designer whose pieces have been worn by Kanye West, Justin Bieber, Rihanna, Travis Scott and many others, masters the narrative of how Fear of God, his fashion line, is worn. April 27 (when the second installment of his Fear of God x Nike collection lands in stores) marks one of the most anticipated streetwear and sneaker releases of 2019.

Much of the aesthetic of Fear of God, aka FOG, leans heavily into Lorenzo’s personal taste and his exceptional eye for styling, layering and proportion.Truly, and almost singularly, FOG’s global ascension can be attributed to Lorenzo’s personal styling of the brand on himself. No one wears it better or more aspirationally than he does. This is not so much a call to mimic his personal aesthetic but to create your own.

There are very few modern brands whose founder both shapes and defines the feel of the company better than any muse could. Does anyone wear Fear of God better than Lorenzo? Or has anyone ever looked better in a Tom Ford suit than Tom Ford? In fact, in a recent New York Times interview, Ford confessed that he allows cinematographers to see his films only after they’re complete. The multi-hyphenate, whose critically acclaimed pictures A Single Man (2009) and Nocturnal Animals (2016) have culturally resonated far outside the epicenter of fashion stalwarts, largely works in this manner, color-correcting each film frame as a guide for the cinematographer to follow. While this method may strike most as arrogant or rather controlling, in the mind of an artist like Ford or Lorenzo, it’s an essential approach to almost any project.

Lorenzo isn’t known to be as controlling as Ford, but he is an artist, and as one, much of his work comes with a certain level of supervision; a certain way of seeing and accepting before anyone else can muster a summation. This, for both fashion powerhouses, has come with a great measure of success.

All of Lorenzo’s work is visually arresting, including the “Old Town Road”–esque pictorial campaign promoting the highly anticipated Fear of God x Nike collection that lands this weekend. Here are five things you need to know before it arrives: 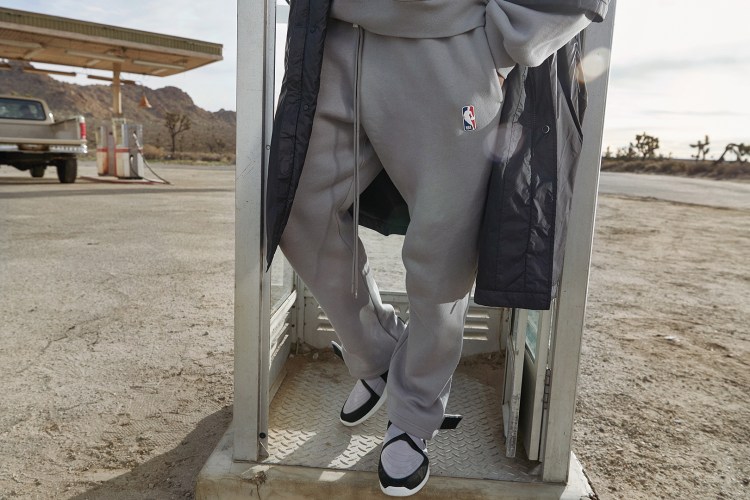 5. Fear of God’s Nike Collaboration Is Also an NBA Partnership

Now that Nike is again the official apparel outfitter of the NBA, and this upcoming collection revolves around Lorenzo’s adoration of the sport, it made sense that Nike would utilize its licensing rights to apply the NBA logo throughout this range of products. You’ll see NBA-branded jerseys and warm-ups that effectively place Lorenzo and Fear of God on a very short list of streetwear companies to partner with the globally beloved league.

4. Lorenzo Redesigned the Nike Air Raid After Falling in Love with the Shoe in High School

When Lorenzo first laid eyes on the Tinker Hatfield–designed Nike Air Raid in 1992, he was only a sophomore in high school. He immediately adored the off-court cross-strapping sneaker, which, at the time, had been introduced with a unifying “Urban Jungle Gym” ad campaign featuring Spike Lee and Tim Hardaway.

“When the kid walked in the classroom with the Air Raid, no one told me that I was supposed to like the Air Raid. I was just drawn to it, the design, the colors. It was like, oh my God, what is that?” Lorenzo said. “It became interconnected with all these other real emotional things that were happening at the time of the shoe.”

Lorenzo felt an even deeper connection to the Air Raid when he discovered that it was Hatfield’s first off-court sneaker—unconventional at the time—designed for the playground. He found it fitting that it would be his first off-court design for Nike as well. 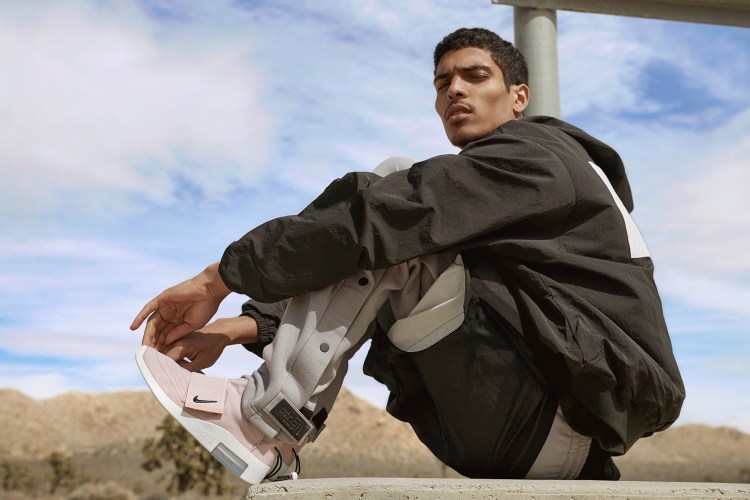 3. Lorenzo Created an Entirely New Silhouette for the Collection

Although the Air Raid–inspired Nike Air Fear of God Raid leads this widely touted collection, Lorenzo also flexed his design prowess by creating a new silhouette from scratch. Driven by the look and feel of a traditional moccasin, Lorenzo’s Air Fear of God Moc has a full ripstop nylon upper with an adjustable mid-foot strap. A toggle system at the heel allows the wearer to tighten the shoe from an untraditional position. The look adds to the collection of off-court sneakers Lorenzo is designing for Nike.

Shot on a picturesque country road with minimal props aside from a glorious old gas station and an eerily perfect diner, the campaign missive follows a basketball superstar who is pre-stardom. Humble beginnings arrive at this on-trend western background that looks like a scene from a vintage Marlboro ad. Its cast rides in a near immaculate beige Ford pickup with nothing more than a weathered basketball and really, really nice clothes. Draped in tailored sportswear-inspired tops, breakaway warm-up pants, parkas, elongated tees and netted shorts, what surrounds these garments, in essence, is emptiness—a symbolic ode to starting with nothing only to gain everything. 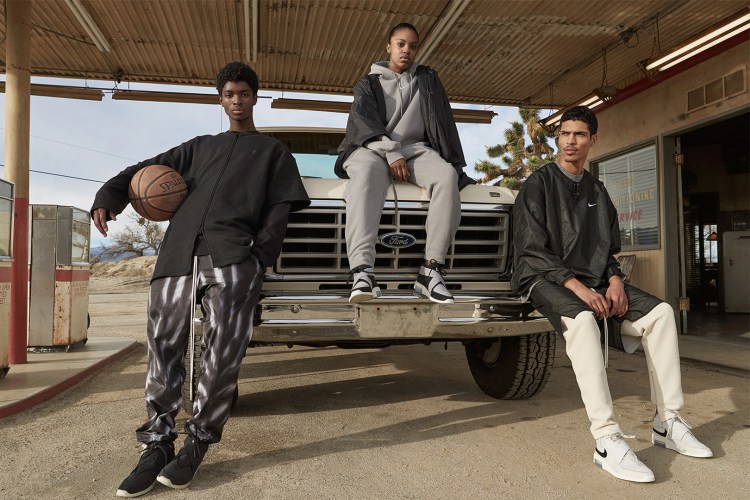 1. You Can Purchase the Fear of God x Nike Collection on April 27 at Select Retailers

Even though it won’t be easy to get your hands on this collection, select Nike retailers will stock this Saturday’s release. For sneakers, the first place you’ll want to try your luck is Nike SNKRS. U.K. retailer END. will host a raffle for both the Air Fear of God Raid and Air Fear of God Moc. Solebox, Slam Jam and Union will also host raffles for an opportunity to purchase. Apparel will be available at FearOfGod.com and Nike.com.

Related: Fear of God’s Jerry Lorenzo Teams Up with Converse