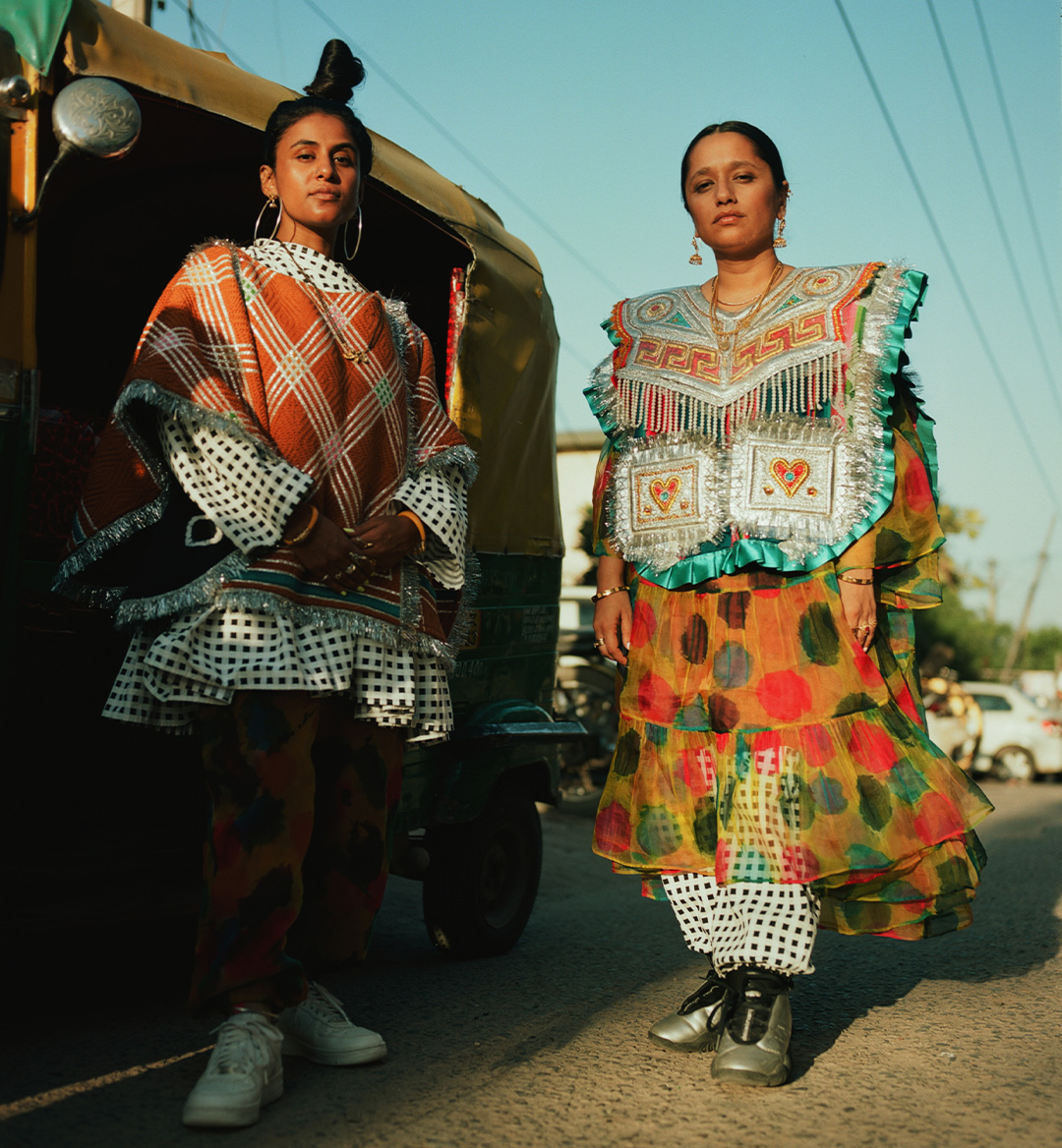 Binary thinking is never productive. Whether with regard to gender, expression or identity, people rarely fall into prescriptive boxes. We all exist—to some extent—within the gray. This notion of the spectrum and a rejection of the binary is what led co-founders of NorBlack NorWhite — Mriga Kapadiya and Amrit Kumar — to create their vivid line and the conceptual thinking behind it. I had the opportunity to catch up with the Delhi-based duo to hear about the genesis of the brand, the ethos coursing through the collections and what’s to come.

The Genesis of NBNW

Mriga and Amrit, themselves, embody much of the NorBlack NorWhite ethos. They are distinctly different (“opposites” in some ways), but the marriage of their respective worldviews has culminated in the direction that has driven the brand to such success.

Amrit and Mriga met in Toronto as they were both coming out of university. Mriga explains how they were drawn to each other: “Both of us incorporated a different sense of style that we hadn’t seen other brown people rock.” Amrit was working at a vintage store at the time and learning a lot about the trade; they were both building relationships with artists in the Toronto scene and “just making shit happen,” as Mriga puts it.

The move to Bombay and eventual creation of NorBlack NorWhite was organic and unplanned. Mriga tells me about a watershed trip that they went on in the days before NBNW—without the intention of creating a brand or even really immersing themselves in textiles. Nonetheless, the duo went to Kachchh, Gujarat, in Northern India, where they stumbled upon on archival library of textiles from the region. The librarian introduced them to the founder of the library, Judy Frater, a woman from DC who was obsessed with textiles. She introduced them to a nearby family, the Kathris, who introduced them to the concept of Bandhani tie dye. 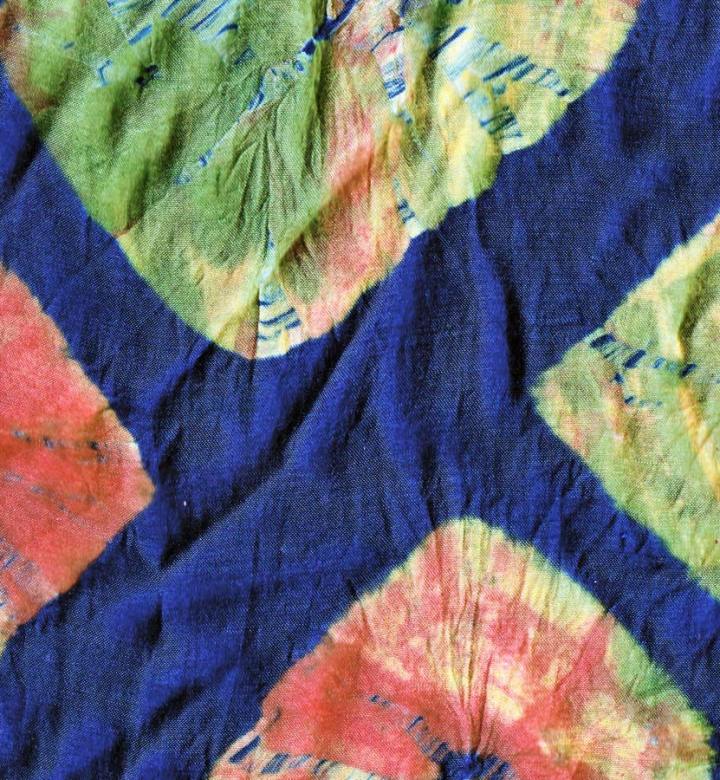 They had initially planned to spend an afternoon with the family, but ended up staying a full week. “I think we were just fascinated by each other and had a really nice energy exchange,” Amrit explains. “We’re just people that like things,” she goes on, illuminating that they weren’t necessarily “textile people” at the time; they were just curious to learn. They began developing some early product after this trip and got an order a trade show, leading Amrit to believe: “Maybe we’re onto something.”

The name of the brand encompasses so much of a cultural shift away from binary thinking, so I was eager to hear a bit about how the title came to be.

Mriga tells me a tory of a rickshaw ride and getting into a conversation with a stranger about gray space and how it played a role in her relationship with her own multicultural identity.

They also cite Michael Jackson’s death as a moment that fortified the name. MJ’s “Black or White” video was a huge part of the duo’s upbringings, and the legacy of that iconic video helped to cement the name. And then, one of my favorite reasons for the name:

Straight up on a fashion level, we wanted to fuck up the attraction to everyone wearing black and calling it fashion.

Throughout our conversation, Amrit and Mriga return to the notion that none of this was supposed to happen. It was the culmination of an eye-opening trip and a myriad of convalescing factors. “A lot of amazing energies gravitated towards us and the work that we did,” Mriga tells me, referring to the nascent days of the brand’s exposure. We discuss their very first shoot in detail, as it is still representative of a lot of what makes NorBlack NorWhite what it is: “We were just doing it out of love at the beginning.”

“There’s something about that shoot that still feels like it’s very core to what we do,” Mriga says. 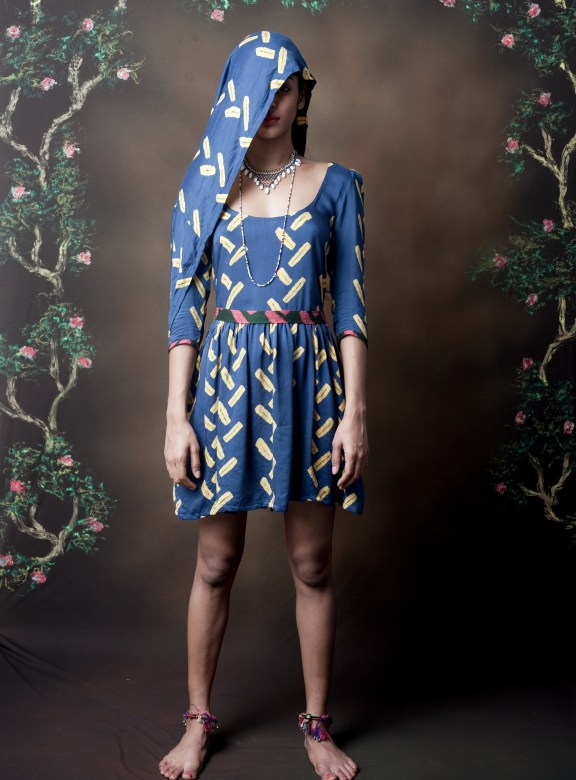 “It was just presenting these very traditional textiles that we grew up around in a way that we would wear them out in the streets in Bombay, in New York, in Toronto. Just kind of making it more accessible to our style. And taking it out of that traditional context,” Mriga explains.

In the early days, they primarily focused on trade shows, but quickly found that the model was less accessible and not providing the most value to their customers. They soon transitioned into the DTC model they rely on to this day.

One thing I loved hearing about NBNW was that they’ve relied on the same tailor since their early days. Mohammed ji came on in a more casual capacity almost ten years ago. “He would roll up and we would give him one design at a time,” they explain, until “eventually he quit his full time job and stuck with us. And he’s still with us.” He’s now the head of the shop, ten years later.

For more information on the whole team that makes NBNW what it is, check out their team page.

NorBlack NorWhite began with primarily womenswear, but—like with the early trade shows—it became clear that gendering the clothing wasn’t necessary for the audience. “Knowing that a lot of different people buy what we make, it never made sense, even in the beginning,” Mriga explains.

As far as the jumping off point goes for each collection, there’s a myriad of ways that a project can come to life. But at its purest form, “we start with a feeling,” says Amrit. Sometimes they’ll start by identifying a textile or a region that they want to highlight, other times they’ll start with street art or some other form of inspiration front he streets of Bombay.

"It comes from whatever we’re interested in at that point,” Mriga explains, adding: “it’s still a very ongoing learning process.” They now have a full design team, and work collaboratively with the group to determine the direction of each collection. “It’s pretty fluid,” Amrit summarizes.

“One thing we started experimenting within the last four or five years is iconic imagery or symbolism that we see in the streets of India,” says Mriga, referring to some of the iconography that has begun to crop up in a lot of their designs. “We’ve formed a little part of our website which is the gift shop, which is a taste of how we explore parts of the streets of India.”

Color is such an integral part of the vibrant design perforating all of NBNW’s looks. “It’s intuitive, a feeling of, this looks amazing together,” Mriga explains regarding the color selection process. “I do gravitate towards certain color tones and so does Amrit, and they’re the opposite,” Mriga chuckles. 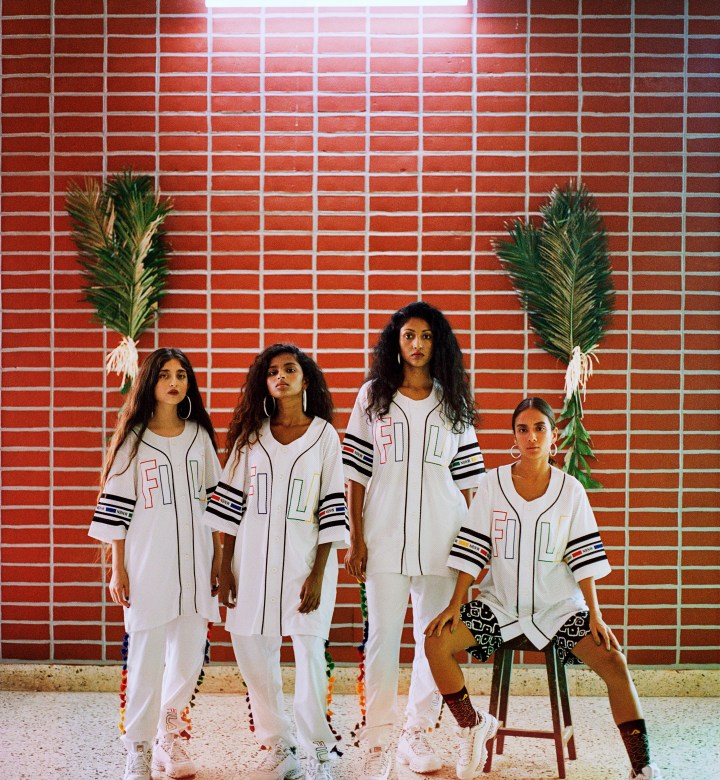 One such highlight was their collab with Fila. “They really gave us a lot of space to do what we wanted to do and we’re quite happy with the results of that one,” Amrit explains. They directed, styled and brought on friends to do the music for that shoot.

If you want to learn more about individual projects that NBNW has worked on, I implore you to check out the Universe section of their site, with blogs and copious imagery highlighting the numerous incredible projects they’ve worked on over the past decade.

Throughout our conversation, Amrit and Mriga both eagerly reveal some aspects of their forthcoming collection. “It’s a mashup of a lot of different aesthetics,” Amrit explains, adding: “You can see bits and pieces of both of us, and also from our design team.” They’ve also started integrating embroidery recently, and hope to see more of that in this collection. “It’s definitely a range. Aesthetically, it’s going to be fun.”

That’s what we’re excited about, changing things up.

“We usually gravitate towards very simple silhouettes, and this one is more experimenting with silhouettes we wouldn’t usually go for,” Mriga says. "We’re playing around with different shapes, more focused on the detailing and trims.”

As far as events go, they’ll also be hosting their first pop up in LA this summer, which will include new pieces and some of their favorites from the brand’s tenure. They did a pop up in BK in 2017 and still maintain a loyal following in the US. So if you’re in the area, keep your eyes on their IG to hear about the pop up this summer.

NorBlack NorWhite embodies so many aspects of a burgeoning fashion world untethered to outdated notions of how clothes should be. As more and more brands reject gendering clothing and prescriptive notions of what textiles you can use for what pieces, the future of fashion will certainly be neither black nor white.