Noreen Seabrook and the Future of Rugs as Art 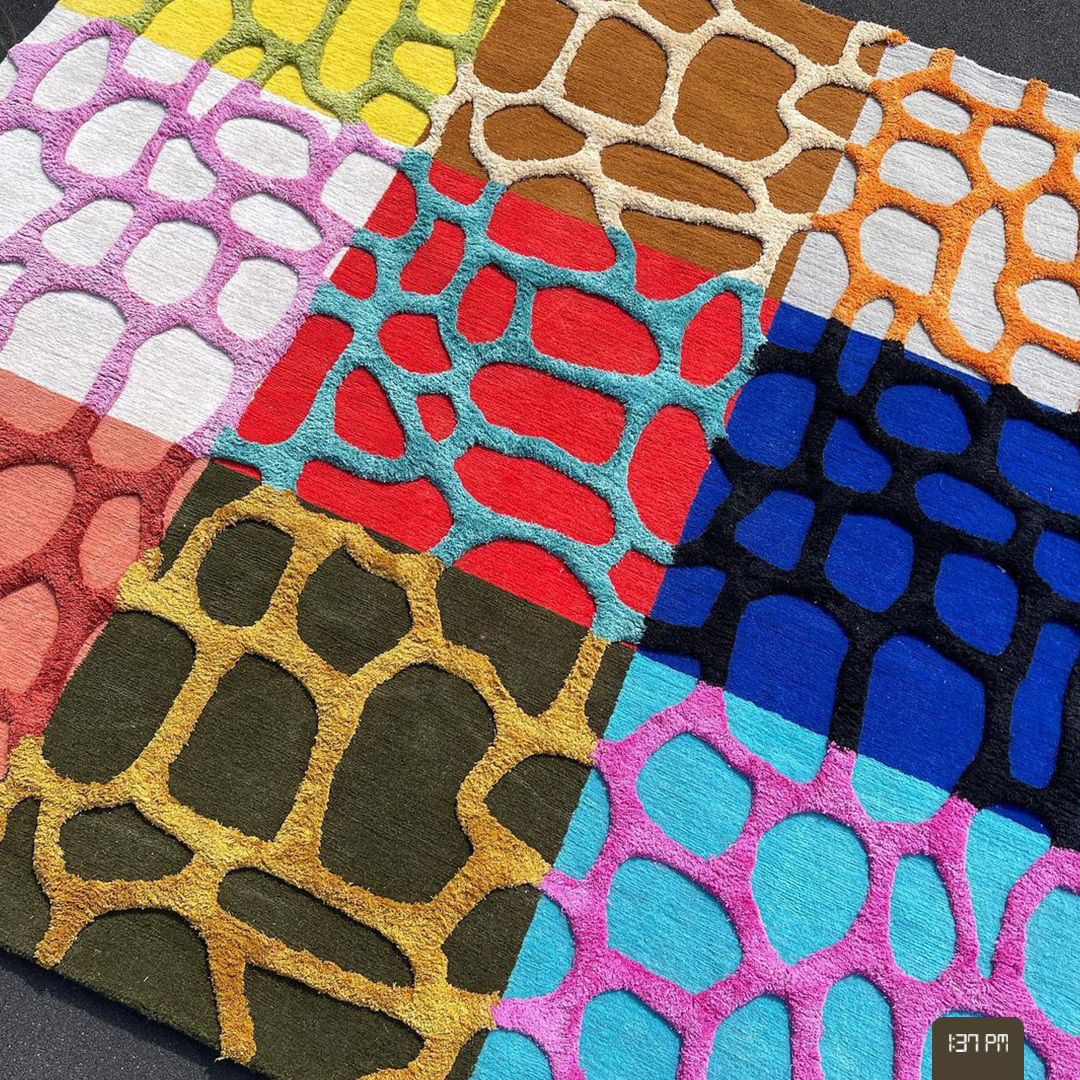 “I really believe nothing is random,” Marko Nichols-Marcy tells me, a mere few minutes into our conversation about Noreen Seabrook—the rug company his parents built from nothing back in 1995. And as we unravel the story together, it couldn’t be more clear that he’s right. From circuitously connecting with legendary photographer Chi Modu through a friend of a friend to getting the chance to show a Dennis Rodman rug to the Worm himself, nothing has been random since Marko took over the helm of the brand four years ago. I got the wonderful opportunity to spend a few hours with Marko at the brand’s Greenpoint-based studio to hear about the genesis of Noreen Seabrook, their impressive roster of celebrity clients and the future.

The Genesis of Noreen Seabrook

Marko’s father and mother started Noreen Seabrook in upstate New York in 1995, naming the brand after his paternal grandmother, Noreen herself. Throughout the entirety of our conversation, Marko’s eyes glisten with admiration whenever he speaks about his father, who was one of the first rug makers in the US to prioritize using manufacturers in Nepal. “He can walk into any room, any restaurant, look at a rug from anywhere in the world, and tell you where it’s from, who made it, and what it means," Marko gushes.

They’ve used the same manufacturer since 1995, with Marko remarking that “these are like second fathers to me,” when referring to the family of weavers and manufacturers he grew up working with. “I think what’s made us so successful is the fact that we’ve always been in Nepal, on site, every three months, working with these guys who for 25 years have worked with us, exclusively,” Marko tells me. That commitment to quality is what allowed the brand to flourish for 20 years as a rug-producer, relying on traditional patterns and beloved designs.

Marko’s father Michael has fostered a deep commitment to the quality and craft that courses through every product Noreen Seabrook makes to this day. "We really want to do something interesting and revitalize this craft that was dying out, because you’ve got a lot of these machine-made and crappy...” Marko trails off before adding: “The more people support that, the quicker this is gonna disappear. Because there’s not gonna be another generation of weavers that know how to weave these carpets.”

Marko Takes Up the Mantle

In 2017, Michael retired from the brand, leaving the son in charge of the thriving business. “He’s a traditionalist,” Marko tells me, referring to his father. “I’m a traditionalist in the sense of the way it’s made. But I’m trying to keep up with the zeitgeist of today,” he adds. While continuing to create the brand’s historically-proven designs, which they sell to wholesale distributors nationwide, Marko began ideating other ways to make more visually interesting and innovative designs.

That same year, Marko went to the MOMA one day and saw an exhibit chronicling fashion through the 20th century. There was a paisley bandana hung up in one of the exhibits, which cultivated an “aha” moment for Marko. “That’s a rug,” was the realization. When he brought the idea up to his dad, “Don’t be bloody silly that’ll never bloody work,” was the response. Marko delivers the feedback in a jocular British impersonation of his father from across the pond.

He would eventually go on to sell two of these rugs to one Robyn Fenty, if you've heard of her.

Since then, Marko has worked on a myriad of different self-initiated designs in addition to producing rugs based on concepts from artists, photographers and more. Early rugs like the paisley design demonstrated that there was a hunger in the market for eye-catching rugs, pieces that you could build an aesthetic around.

What appealed so many different creatives to what we’re doing is that we were able to introduce a whole new canvas that—for the majority of the past 50 years—has just been something you walk on.

Marko and his team, Eric, Sean and Chris, worked to institute a variety of different designs in the past few years. One of which was the Tibetan tiger theme, which has quickly become one of their more sought-after designs. On the decision to incorporate the traditional tiger rugs into the roster, Marko tells me: “Once we’ve gotten the attention, I think it’s our responsibility also to pay some homage to the actual culture and the work that has some integrity in the design.” He got some pushback from his wholesale distributors on these designs. But the first one they made, they sold to a pro football player. The second one? Kate Moss.

In this era, Marko also began utilizing Instagram more heavily, as the newer, vivid designs were well-suited to the platform. While the previous designs certainly made great additions to high-end living spaces, they didn’t necessarily have the flash that caught the eye of the contemporary social media user.

Marko is a goofy and charismatic guy, fluctuating between staunch humility and the kind of bombastic swagger required by the modern day artist. In a more reflective portion of our conversation, he turns to why he’s able to remain so steadfast in his commitment to the quality of the work. “There’s a whole group of people that I think have been my motivation to work hard,” Marko notes, referring to the weavers and manufacturers who rely on the work and the entire network of actors that contribute to the success of the brand. “If it was about me, I would half-ass it,” he chuckles. “If it’s about other people that have inspired me or been mentors to me or have helped me in the past, then I want to do the best I possibly can. And that became a habit after a while.”

As an avid fan of a lot of the celebrities Marko has worked with, I had to indulge myself and ask questions about his most exciting and interesting client work. “We’ve never put anyone on a pedestal so they can look down on us. We’ve looked at them as human beings,” Marko tells me, a reflection on how they’ve been able to maintain such a high-profile roster of collaborators.

Their first art commission was from the painter Jay West, working with him to create a rug based on one of his paintings. That connection sparked many more and the realization: “Oh shit, we’re really onto something here. And everything was organic.”

From there, word of mouth kept bringing more clients in. Folks would see rugs in friends’ homes (like the home of NYC artist Baron Von Fancy) and ask about the creator. That’s how Marko got set up with then-NY Giants player (now Detroit Lions) Romeo Okwara and numerous others. Through Romeo, he attended the release of an ASAP Rocky album at Sotheby’s back in 2018. That’s where he met Chi Modu.

It’s hard to think of someone whose work has had as big of a societal impact as Chi Modu. The photographer is responsible for some of the most iconic photographs of hip hop artists from the 1990s and 2000s, and re-emerged last year as one of the first major photographers to mint their work on the blockchain. “I met Chi not knowing he was, and as a result I was able to just be who I am,” Marko tells me. Their conversation subtly hinted at the possibility of Noreen Seabrook creating a rug based on one of Chi’s photos. And Marko ran with it.

The rug he decided to create based on a Tupac photograph would end up being one of the higher-lift rugs the manufacturers had made to date. 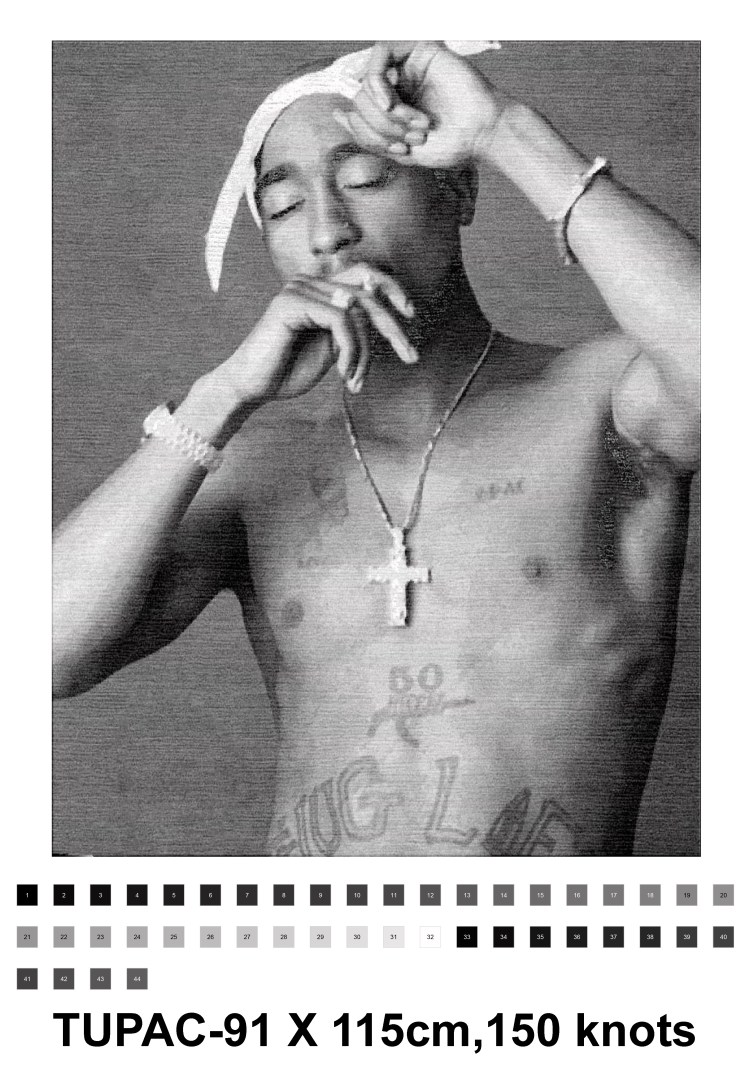 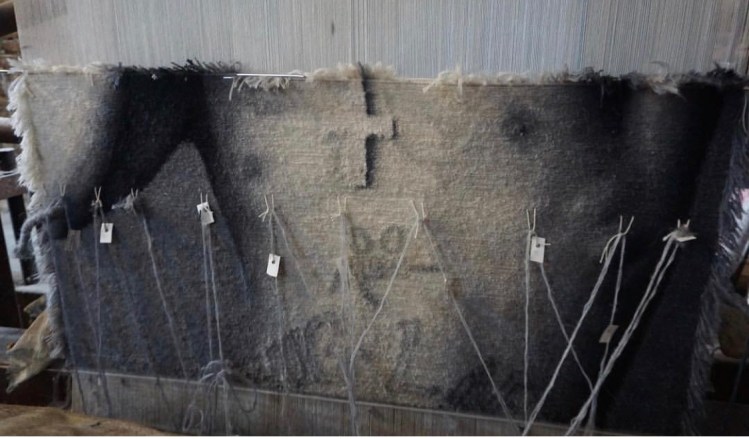 Marko tells me that the experience working with the weavers on this rug differed from their previous work on traditional patterns. “The weavers, for the most part, have never been the kind of be proud of their work. This is something that’s part of their culture; they’re not weaving a rug and then taking pictures of it.” But it was different with the Chi Modu / Tupac piece, a work of art in its own right. “They were so proud of this work. I think it’s one of the more impressive things we’ve done.” 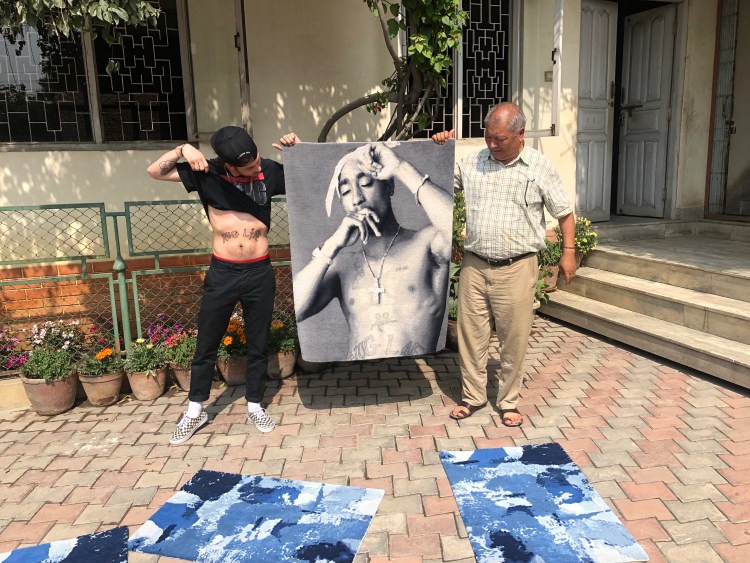 It might be difficult. But once you’ve done it and you’ve done it well, not only are you better at what you do, but it’s encouraging. It’s worthwhile.

He was nervous to show Chi the work, especially after almost getting the rug confiscated at airport security (Tupac’s spirit interfering, Marko wonders). But he and Chi reconnected after it was complete and spent an evening together, with Chi trying to get to the bottom of who Marko was. Upon revealing the rug, he uttered a simple, “Oh, wow.”

“For me, I think he was one of the more inspirational figures. Even though I only met him twice,” Marko tells me of his time with the late, great Chi Modu. They had had plans to do a collection of rugs based on Chi’s photos, but as these things go, it never came to fruition before Chi’s untimely passing last year.

This article could easily devolve into a catalogue of all of the high-profile collaborators Marko has worked with and eccentric stories of his time with them, but I’d prefer to focus on the ethos that has been driving Noreen Seabrook since the younger Nichols-Marcy took over the brand four years ago. Around the time Marko took over, he had been diving into some books chronicling the history of rug design, especially during the rise of the Art Deco movement. The sensationalism of that era died down, but he learned a lot from these historic dives. “It got watered down, like everything does,” says Marko, before adding: “I’m a very firm believer that history doesn’t repeat itself, but it does rhyme.”

As a lifelong Chicago Bulls fan, Marko is also constantly inspired by Dennis Rodman and his work ethic. “He made rebounding as cool as Jordan made dunking,” he tells me. And by incorporating these more eclectic designs, Marko is essentially trying to do the same thing, drawing the eye and focus to something long swept under the radar.

I wanted to make rugs as cool as Rodman made rebounding.

As for the what's to come, Marko is eternally grateful for all of the client work, but wants to make sure to implement some of his own design ideas as well going forward. “I think I wanna start to really introduce some original work, some original ideas,” he tells me. Marko’s ethos surrounding Noreen Seabrook more closely represents an artist than a businessman. “I’ve never had the mentality like I’m here to sell. I’ve always had this like, I’m here to share. I want to share this world. I want to show you what this stuff is,” he says.

By combining the work ethic and business acumen of his father with his own intense creativity and charisma, Marko has managed to strike a balance that will see Noreen Seabrook in the spotlight of rug design for years to come. Sitting atop a stack of god knows how many rugs, gazing across the sun-soaked studio with a sense of gratitude, Marko leaves me with love: “This is where my heart is. And I’ve got a responsibility to take care of this.”