Rihanna: From Muse To Billionaire 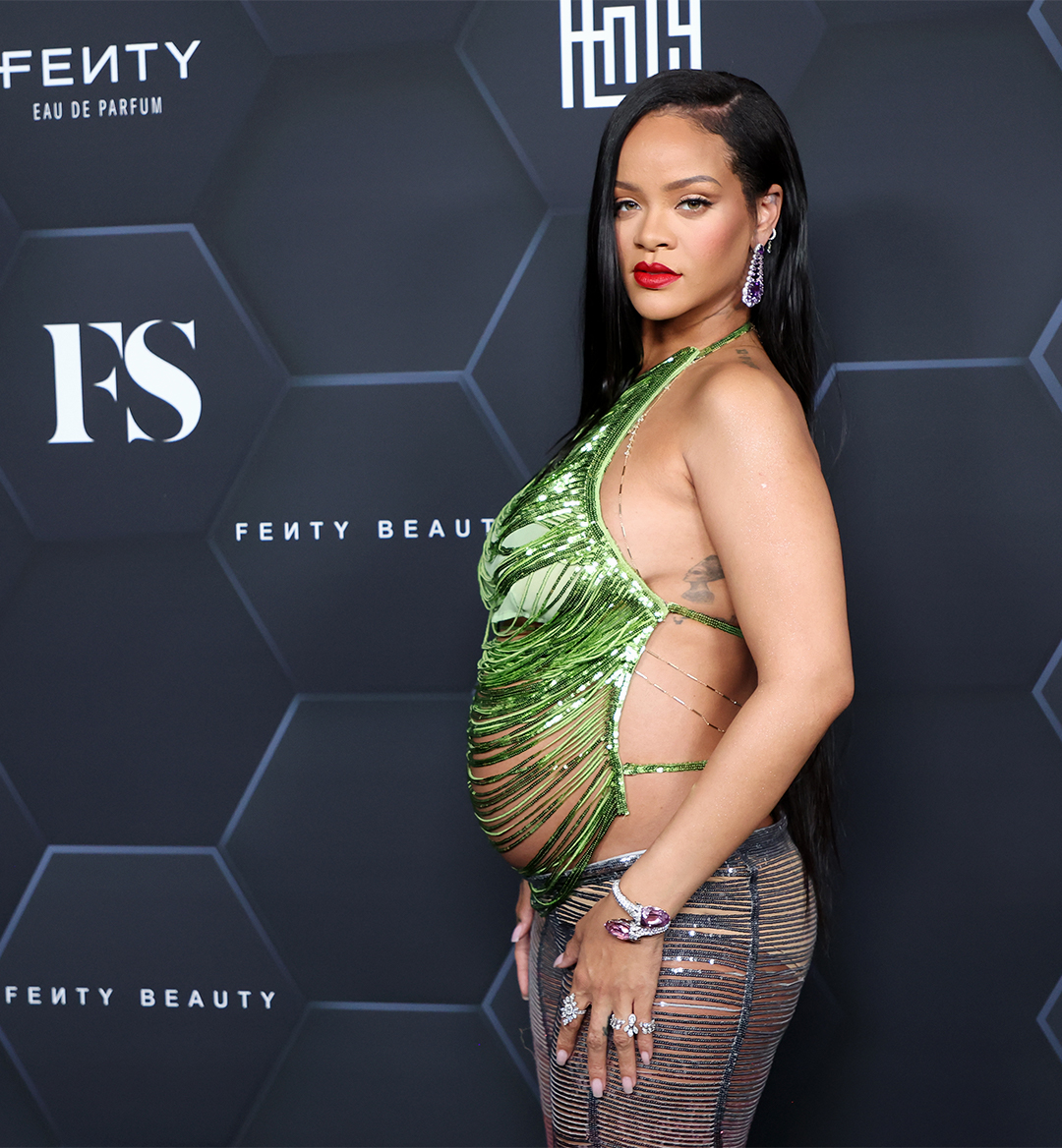 As you all know, today is Queen Rihanna’s birthday, and the newly-turned 34-year-old has had quite an eventful past six months. Of course, last month it was announced that the singer turned entrepreneur was expecting her first child with rapper boyfriend ASAP Rocky, and in August, her net worth was valued at $1.7 billion officially making her a billionaire. While some of that billion has come from her record breaking music career, it’s safe to say that a good percentage (possibly majority) has come from her Fenty beauty and fashion empire.

Rihanna released her first album Music of the Sun in the summer of 2005. While that album along with her sophomore effort A Girl Like Me were both successful on the charts, it was 2007’s Good Girl Gone Bad that catapulted Rihanna into another dimension of commercial success. With that commercial success also came a flurry of brands that wanted the then 19-year-old as one of the faces of their products, and one of those was CoverGirl, whom Rihanna signed a deal with in 2007.

The artist was the face of many CoverGirl products, making it her first dive into the world of makeup, and paving the way for her own Fenty Beauty brand that would launch ten years later. In a June 2007 interview with People, Rihanna stated that her CoverGirl endorsement was a dream come true.

“My mom is a make-up artist so I really wanted to put on makeup and she wouldn’t let me because I was always too young. And now I can because I’m a CoverGirl. When me and my best friend get bored at night we go to CVS to buy a bunch of stuff to try. I like different colored eyeliner, I love different shades of lipsticks and lip glosses, anything with colors.”

Rihanna would continue to appear in many ads over the course of the next couple of years, it was also during this time that she would begin to capture the attention of the high fashion world.

While the Good Girl Gone Bad era was noted for its many hit singles, it was also the period of time in which Rihanna transformed into a style guru in the making. It started with “the bob” hair cut (Rihanna famously cut her long tresses into a short bob as a part of her makeover for the album), which was eventually transformed into a short pixie cut a la Linda Evangelista. 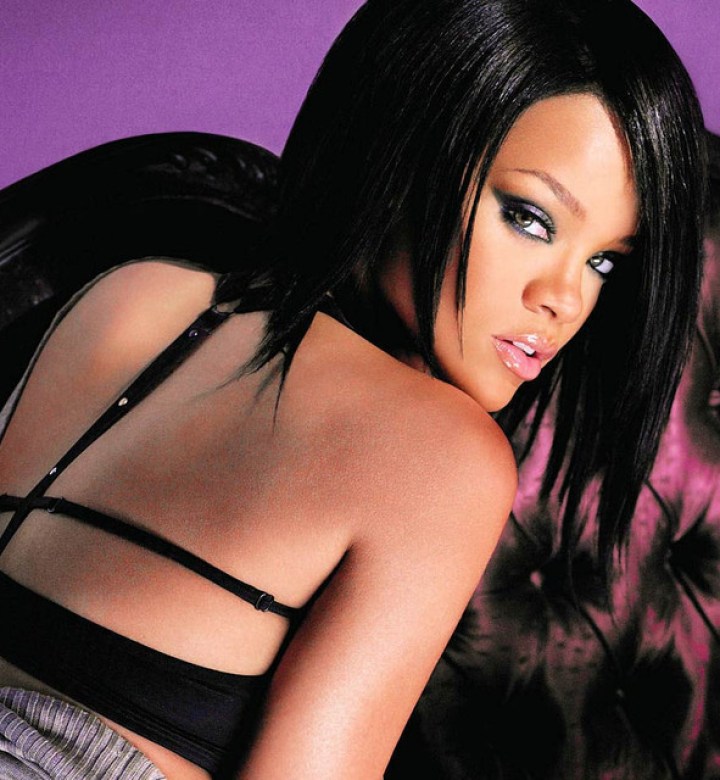 That short pixie took Rihanna’s supermodel looks to the next level, not only setting her apart from her music industry peers, but giving her a rare high fashion/couture look that very few possess. 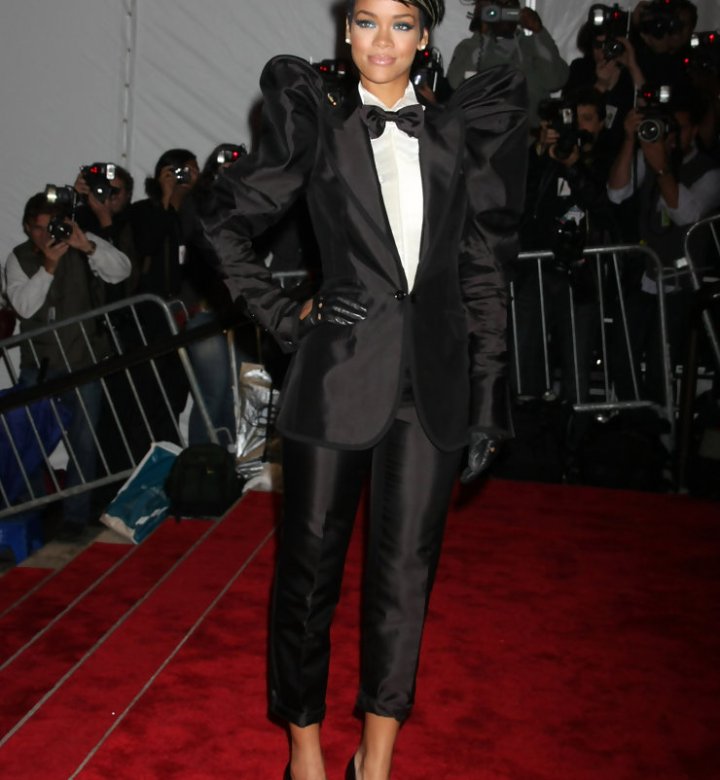 We saw Rihanna pull up to the 2009 Met Gala in a tuxedo, give her own take on punk rock fashion, and even don elegant looks such as the Alexandre Vaulthier Fall 2009 dress at the 2009 Red Carpet Fashion Awards. Rihanna was making bold brilliant fashion statements, and the fashion industry was being put on notice as she was featured in a Gucci campaign that same year. 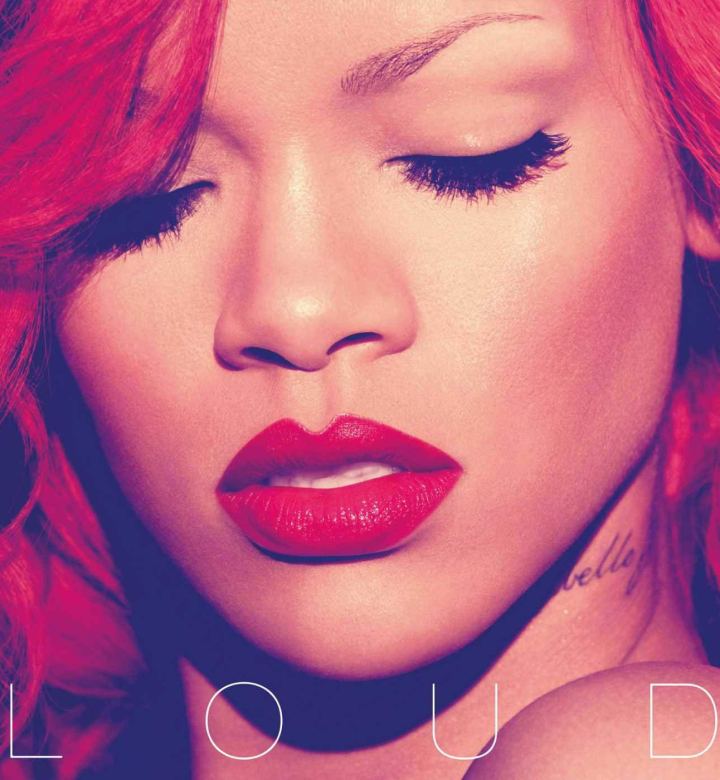 Rihanna debuted her Loud era with bright red hair in a move that was considered a bit shocking back in 2010/2011. We don’t see Rihanna with red hair that much nowadays, but it’s still the foundation for a lot of other artists who have since adopted the red hair look. 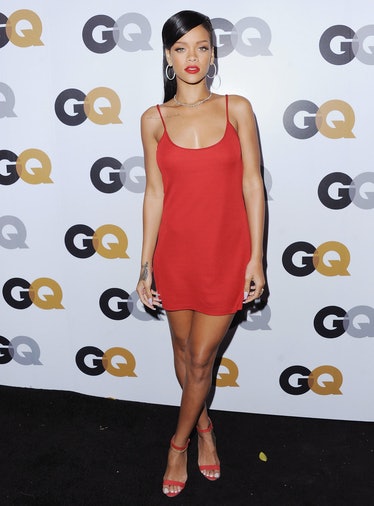 Rihanna sported a chic sporty athletic look at the GQ Awards in 2012. 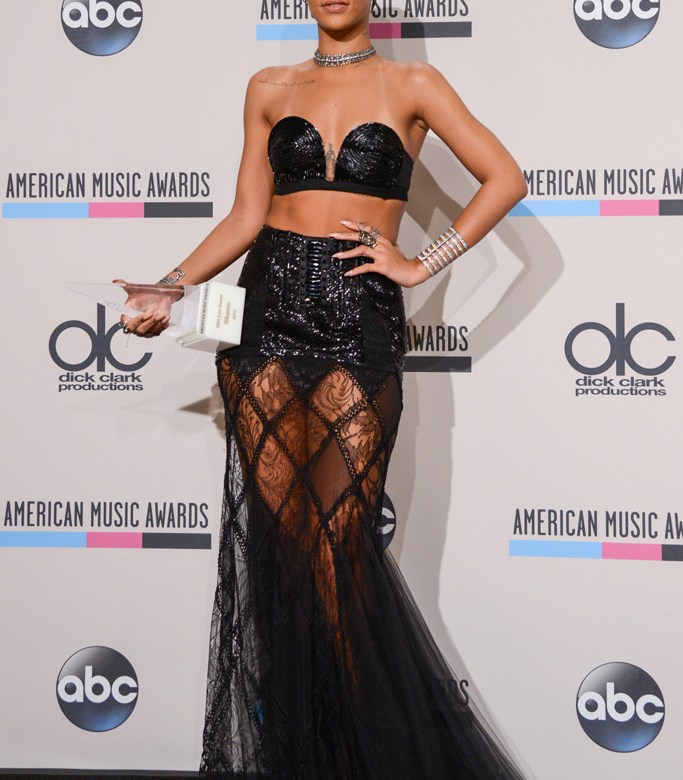 If you ever had your hair straightened as a kid, then you are more than familiar with the bobby pin hair wrap that your mom and aunties did for you to preserve your style for the next day. Rihanna brought back that hair wrap look at the 2013 American Music Award along with a risque outfit as she accepted the Icon Award. 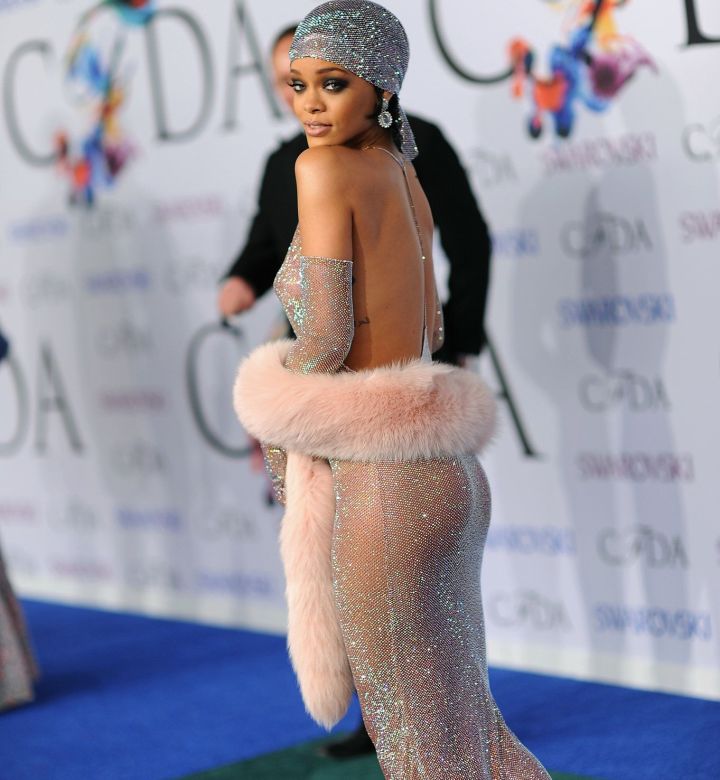 Speaking of iconic fits, we present one of Rih’s most legendary outfits—her glittery sheer dress from the 2014 CFDA Awards. Known as the “naked dress,” Rih pushed style boundaries to the limit, creating a moment that will be remembered in fashion history forever. 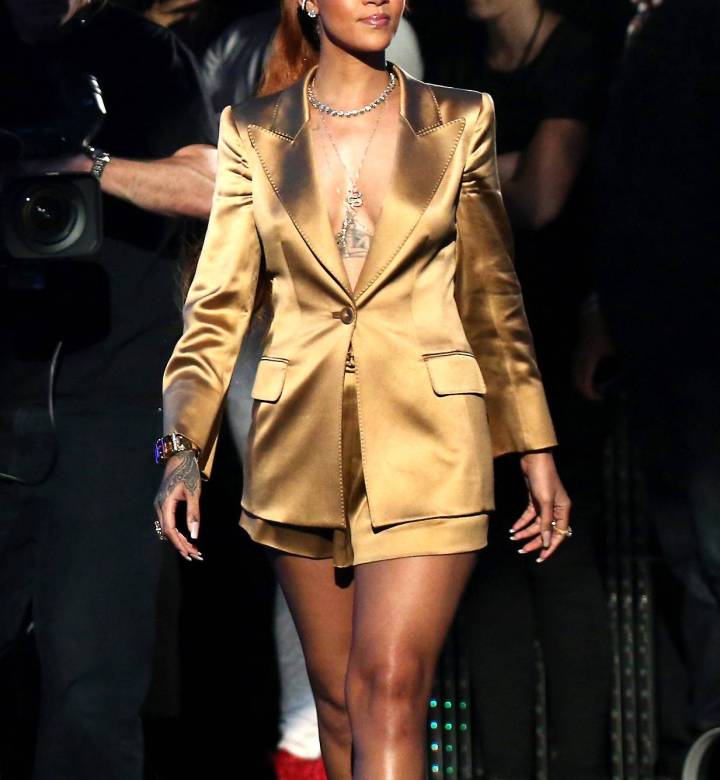 Rihanna kept it simple at the 2015 BET Awards, but still made a statement with her gold ensemble and light brown tresses. 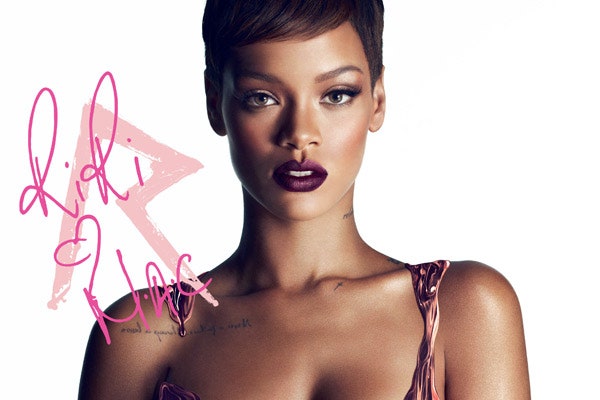 From 2011 to 2017, Rihanna was the face of many more brands, further establishing as being one of the most marketable celebrities in the world. RiRi inked deals with Balmain, Dior, Puma, and more, and notched her second major makeup partnership with MAC in the Fall of 2013, which was a small preview of what was to come.

Rihanna also partnered with Sephora as another distribution channel, and recently announced that Fenty Beauty would be joining the Ulta Beauty family this March.

2022 is also expected to bring about Fenty Beauty stores, where fans of the line can shop in person.

In the four years since its launch, Fenty has become one of the top beauty brands.

In May 2018, Rihanna debuted Savage Fenty, a lingerie line designed for all genders and sizes. Like Fenty Beauty, Savage has been incredibly successful, with many famous ambassadors such as Megan Thee Stallion, Normani, and Kehlani.

Savage Fenty is also widely recognized and praised for its annual Savage Fenty Fashion show which combines runway models showcasing the latest Savage styles, and performances from the industry’s finest.

So that folks is a small glimpse of how Rihanna became the billionaire she is today. It didn't happen overnight, and as you can see, Rihanna went from being a brand ambassador to thee standard for beauty and fashion businesses over the course of a decade. If you have a goal and put your mind to it, you can truly do anything. Rihanna proves that.