Thrift2Death and Sustainability in Fashion 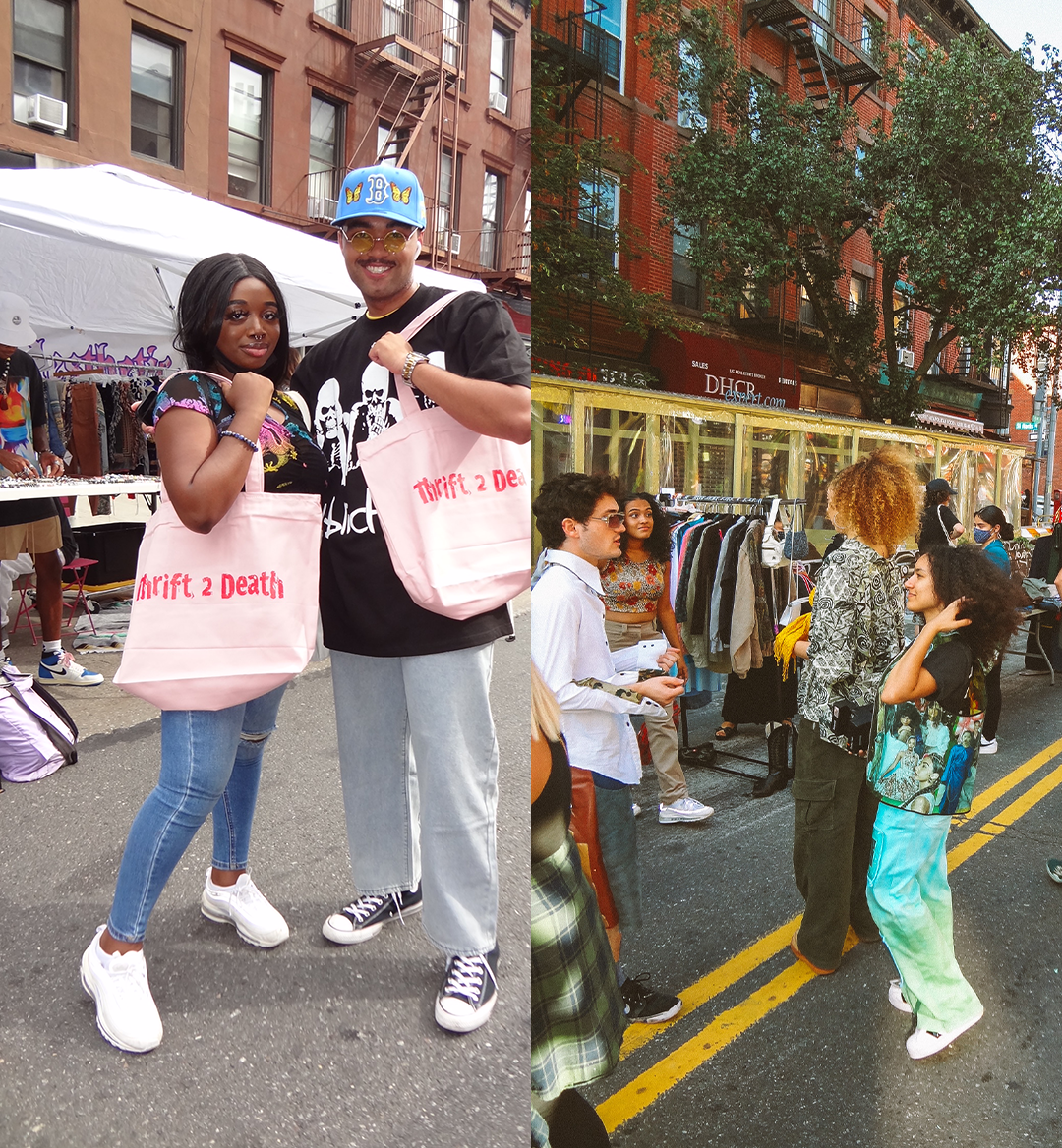 Sustainability has long been a topic in fashions circles, asking those interested in getting dressed to investigate their practices of shopping. And while there are certainly brands who operate sustainably, one primary practice remains supreme in terms of reducing one’s carbon footprint and getting the most use out of the garments that are already circulating: thrifting.

Throughout the pandemic, numerous new avenues for buying recycled clothing have emerged, opening up new possibilities outside of just going to your local Goodwill. Thrift2Death is an NYC-based thrift pop up market and meet up community, started last year by Treysaun McGeachy and cofounder Christain Neils. We spoke to Treysaun ahead of the first summer Thrift2Death event of the year, which will be taking place this Saturday, May 14th outside of Slope Vintage at 71 5th Ave in Brooklyn.

Throughout the pandemic, Trey began producing a lot of thrifting content on TikTok, posting reviews and other content meant to provide the community with resources for thrifting successfully. He was simultaneously working for a shop called Slope Vintage, and realized the potential opportunity for bringing a community together. He pitched the idea to his boss, partially based on the opportunity posed by the pandemic-initiated practice of closing 5th avenue to allow for shops and restaurants to spill out onto the street.

“I have so many friends who are designers or curators,” Trey tells me, adding:  “So I thought it would be cool to highlight other people and small businesses, and just throw an event for the community.” They hosted the first event July 24th in the summer of 2021. “It went so well. It was a nice day, a lot of people came out and supported the businesses,” Trey recalls excitedly. The initial success convinced Trey that this could be a successful community-building model going forward. “Wow, this can be an actual thing,” was the immediate reaction.

They did events on a monthly cadence throughout last summer, and then had to figure out ways to activate throughout the colder months of NYC’s winter. They did a Halloween party with an org called Aftr Prty, did an indoor Holiday Market, and then did a fashion show in Spring 2022.

Summer is when Thrift2Death really thrives, and Trey is eager to get back to the streets of Park Slope for more events this summer. “In the beginning, we were mostly asking friends to participate,” he says, but after the success of last year’s events, they’ve had to open up applications for vendors for this summer’s events. Trey has also remained committed to making sure that vendors’ participation is accessible; they charge vendors only $50 to participate.

As of today, there are four Thrift2Death fairs set for summer of 2022, with more to come. There will be an event on May 14th and 28th, and then two in June. In the coming weeks, Trey plans to finalize dates for July and August events as well, after which they’ll open up vendor applications for the many sellers eager to get involved with the event.

In a world where thrifting is not only an accessible practice to acquiring a wardrobe, but one that emphasizes sustainability above any other shopping method, Thrift2Death and Trey are demonstrating a future of fashion that will never go out of style. See you this summer.