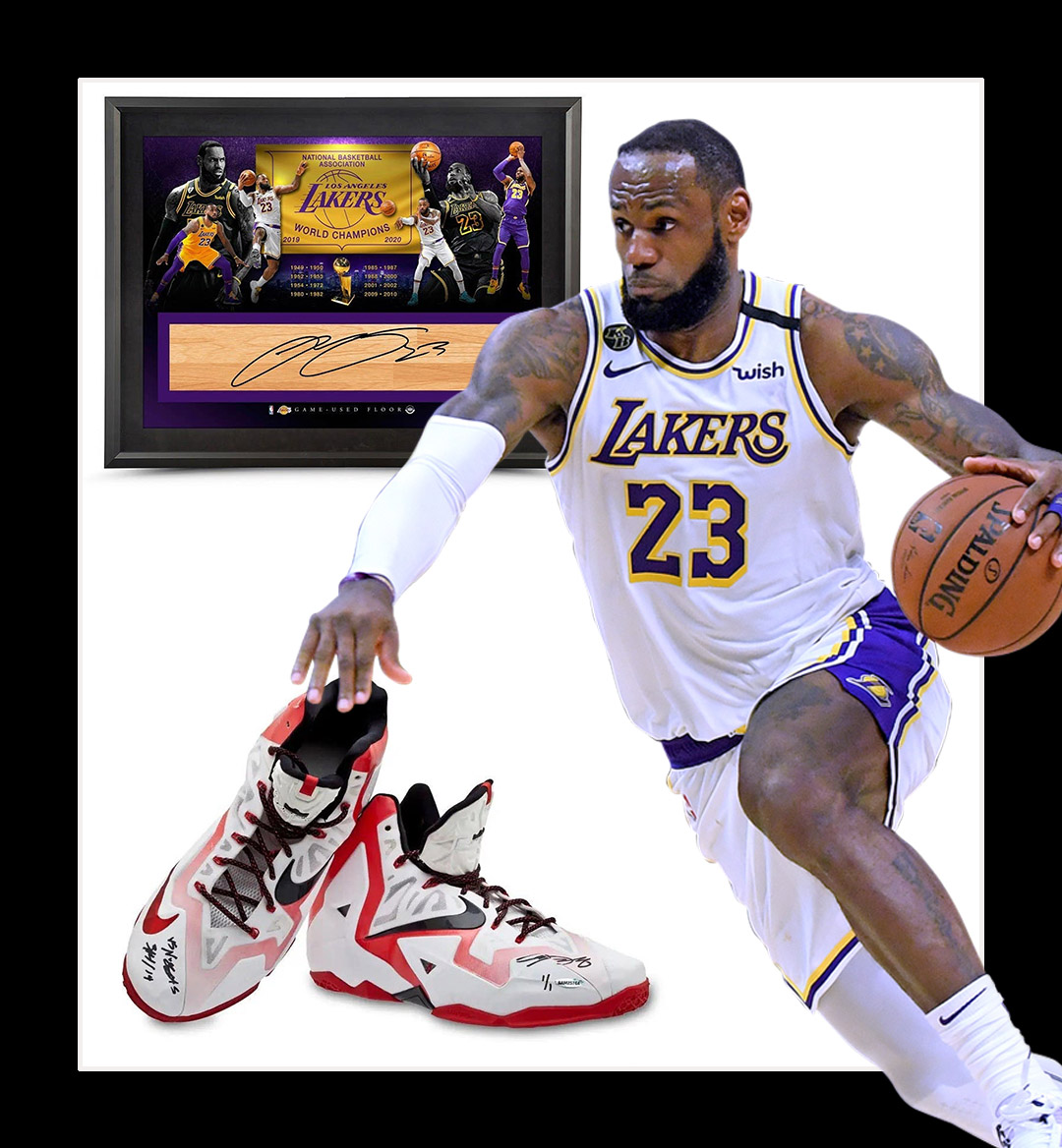 Does the impending NBA all-time scoring record have you thinking about LeBron James collectibles? Let's get into it!

Many thought when Michael Jordan retired for good after the 2002 season and Kobe Bryant hung it up after the 2015 season, that nobody would have a chance to break Kareem Abdul-Jabbar’s NBA all-time scoring record. “The Captain” has held the mark at 38,387 points since 1988.

But then again, when Jordan’s career was winding down, there was just a little buzz starting about a then 17-year old manchild phenom from Akron, Ohio known simply as LeBron.

While James never played against Jordan professionally, word is that as a high schooler he was impressing the GOAT in pick-up games together, and the expectations started.

But as good as LeBron has been throughout his 20 year career, I’m not sure any of us actually saw him breaking Kareem’s 38,387 points record at all - let alone potentially in 100+ fewer games played.

I’m not here to tell you all about the record, you can get that info from ESPN.com. But what I can tell you is how significant this record is, and why it will cement many LeBron collectibles down as must-haves and increase the demand and long term desirability of his stuff.

In just a few short weeks, he’ll not only be an 18-time NBA All-Star and 4-time NBA Champion, but he’ll have scored more career points than any other player in NBA history. And that’s just the tip of the iceberg. Point being, it’s going to be hard for future generations to make a case against LeBron being the true greatest of all time.

Now let’s take a look at my picks for the top 10 most significant LeBron James collectibles: 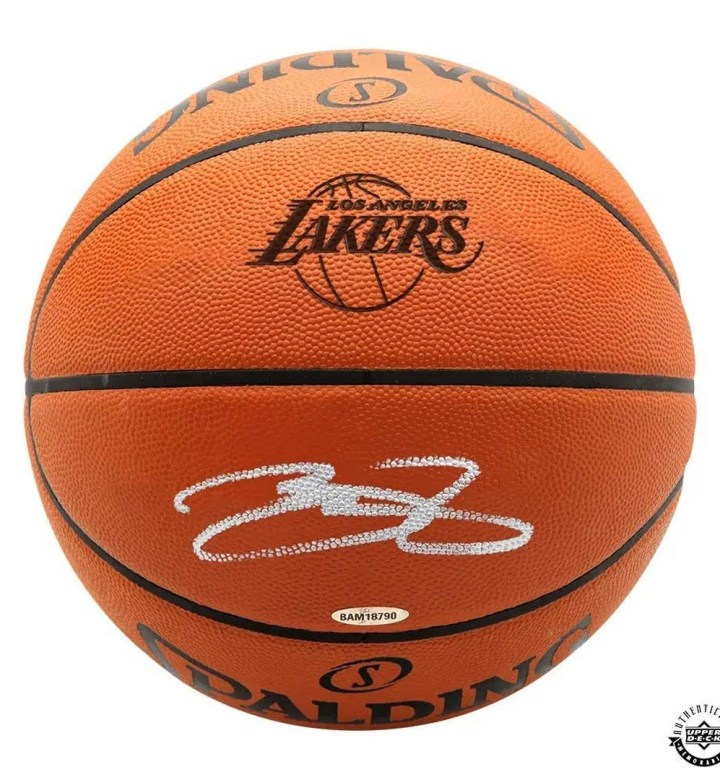 Signed when he joined the Lakers in 2018-19, at first glance just your basic replica NBA Basketball with a Lakers logo stamp on it, the real significance of this collectible is its rarity. First of all, King James has likely signed less autographs than most other star athletes by a significant margin. He’s been Upper Deck exclusive since age 18, and this ball is signed with a silver pen, looks sick, and is authenticated by Upper Deck - so you know what you’re getting. 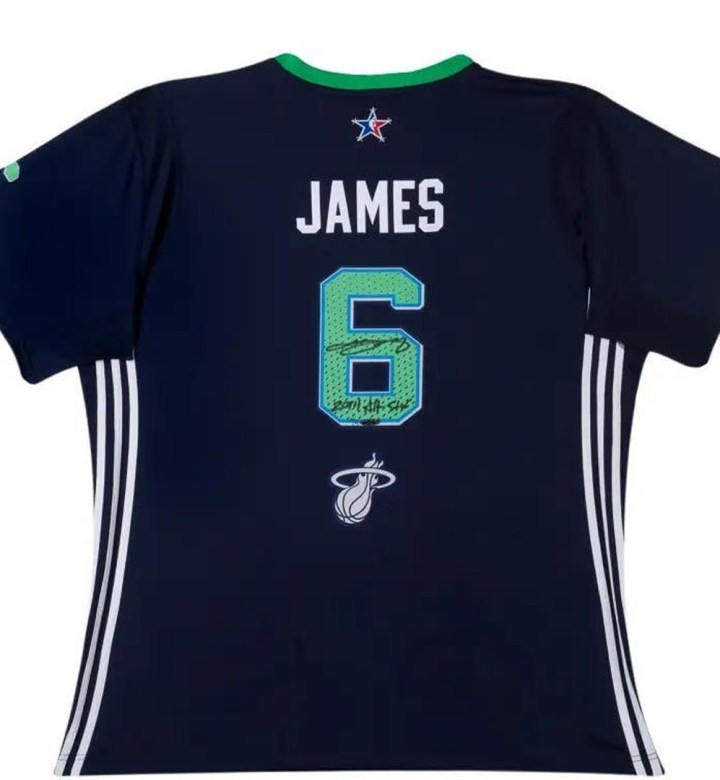 A replica jersey from his 2014 All-Star campaign as a member of the Miami Heat, James signed the #6 on the back of the jersey and inscribed it “2014 All-Star.” Although not game-worn, it’s NBA Authentic and limited to 14 total. 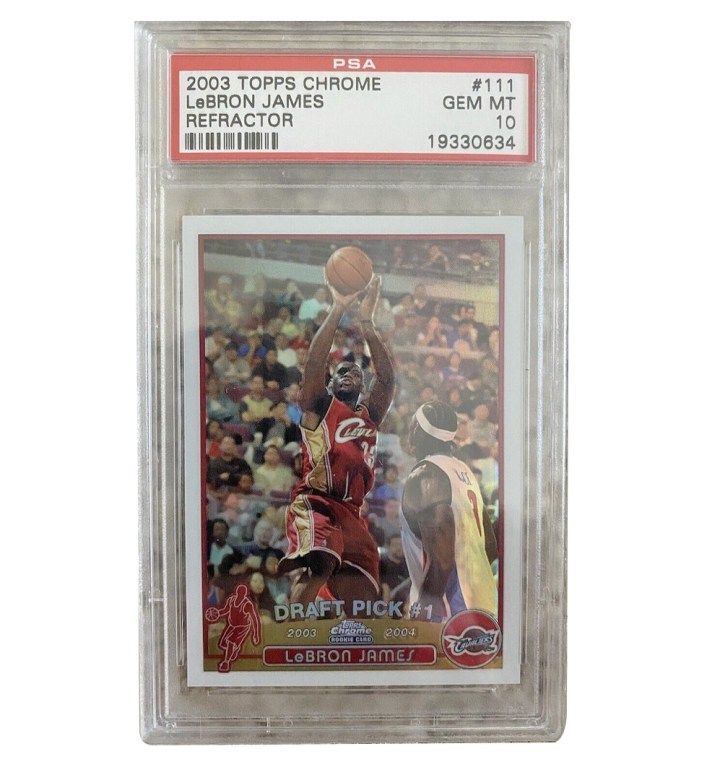 Here it is, the most recognizable, iconic, if you will, LeBron James rookie card. In PSA 10, it only has a population of 174. In BGS Pristine 10, its population is unknown but likely similar, and in BGS 10 Black Label it’s likely far more rare. 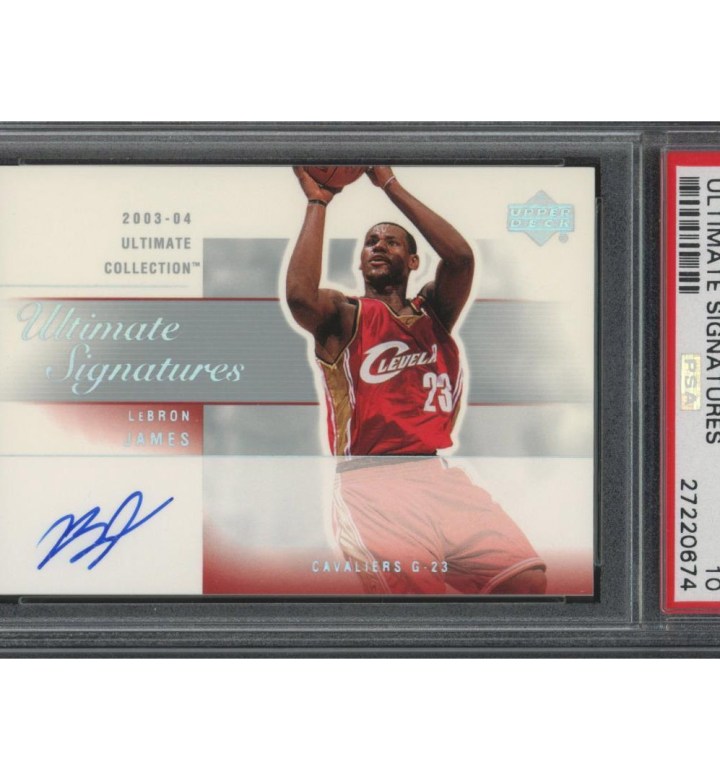 To the ultimate LeBron collector, there’s nothing like a rookie autograph PSA 10, and even though this card isn’t serial numbered, it’s short printed and there’s only 14 graded a gem mint PSA 10. 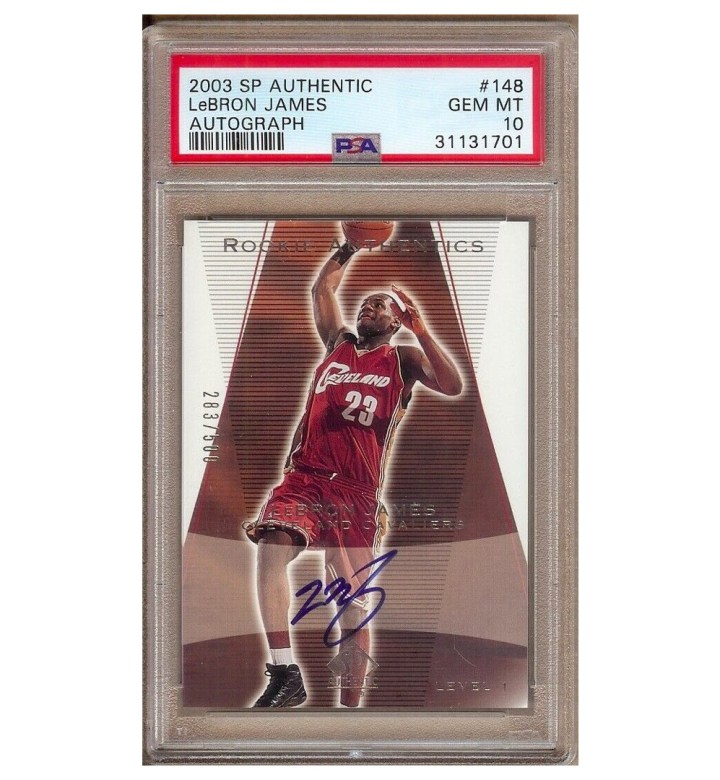 Unlike the Ultimate Collection above, the SP Authentic is serial numbered to 500, and there’s only 50 PSA 10s out there. 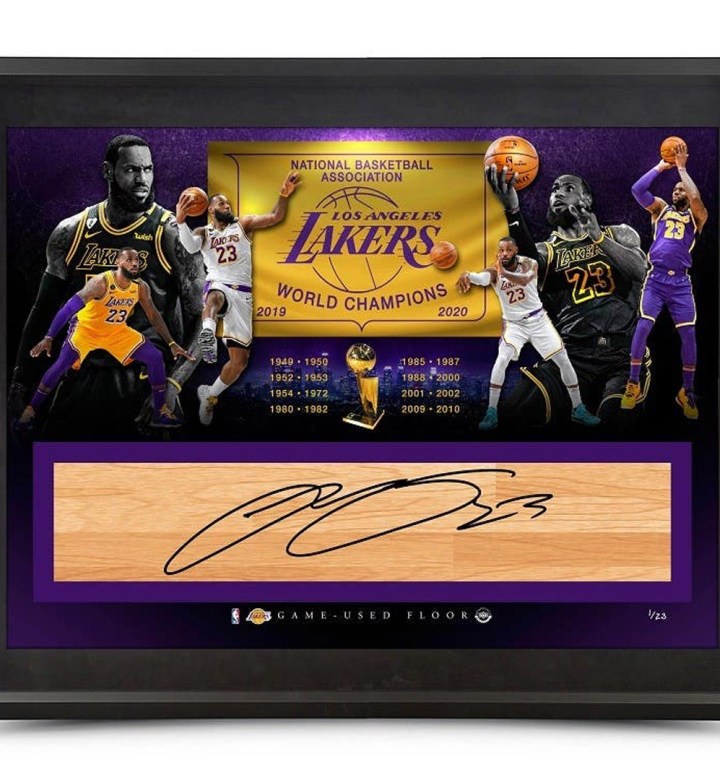 This is one of the most unique LeBron James collectibles on the market. In many cases with these types of items, collectors are left wondering how many of the floor pieces are out there. In this case, the Upper Deck store has limited these to 23 and 20 each, respectively - each being from the Lakers 2020 Championship run, signed by LeBron and beautifully paired with a print in a high-quality display case. 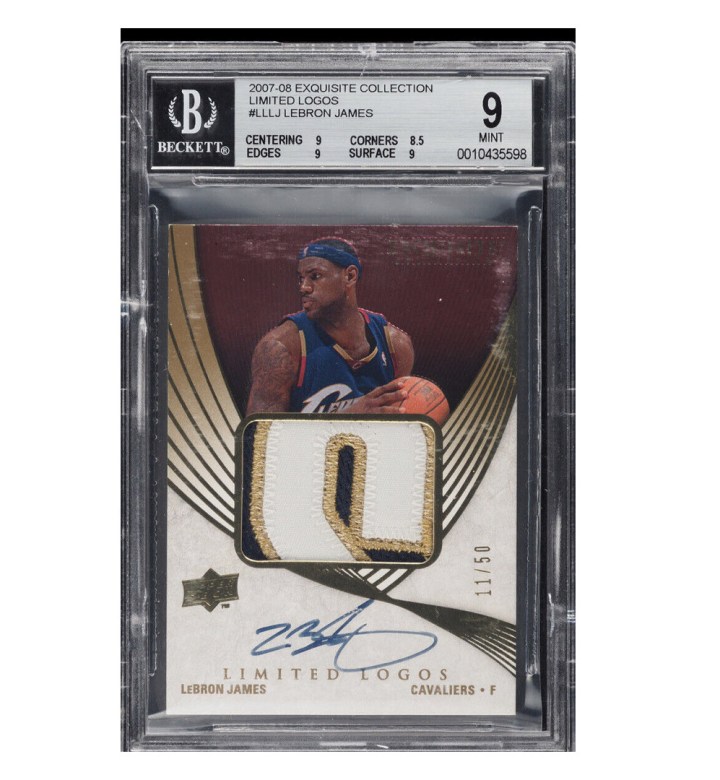 Back to sports cards, this one is super-desirable because it features a game worn patch and an on-card auto of which there are only 50 in circulation. Each patch is from a different part of a James uniform that was used in a game, and value will vary depending on the card grade. 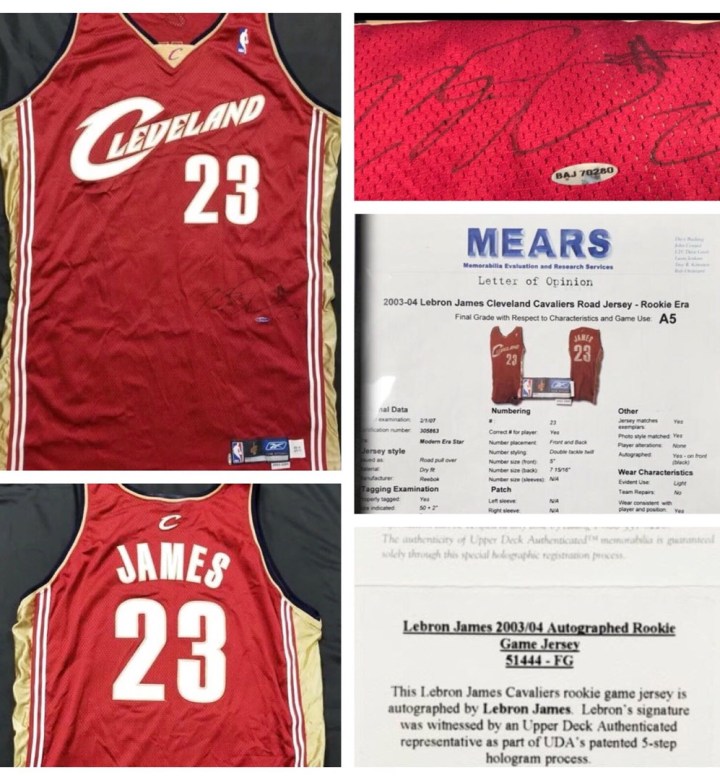 Usually every huge reward comes with a solid amount of risk, and this piece stood out for a few reasons. First of all, it claims to be a game worn autographed LeBron jersey from his rookie season in 2003-04, and it comes with a certificate of authenticity from both Upper Deck and MEARS. But when you look at the price the seller wants, and combined with the fact that it’s on eBay and not directly from the Upper Deck store, or via a high-end auction house like Sotheby’s, Goldin, Heritage or Pristine, proceed with caution. Assuming this is legit though, it has to be considered a top three LeBron collectible. 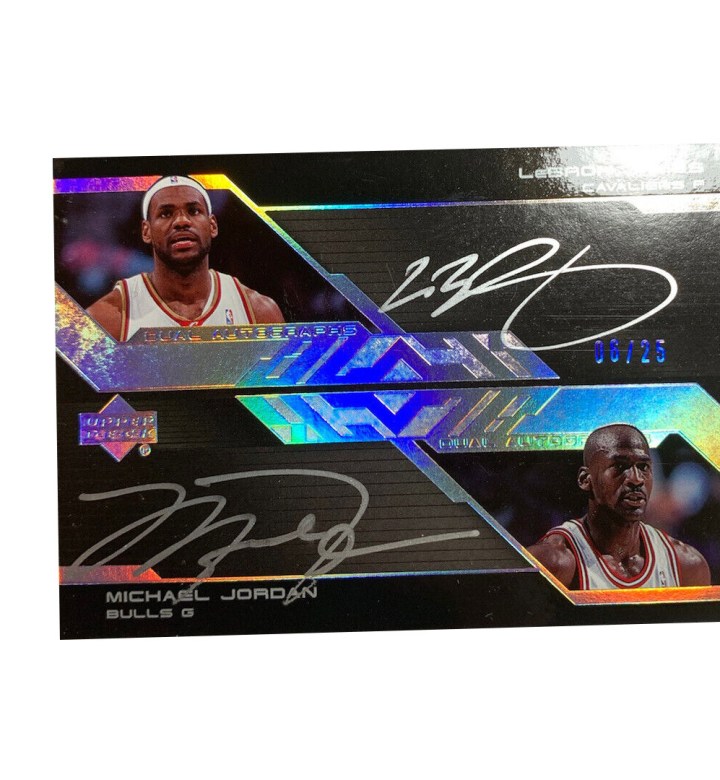 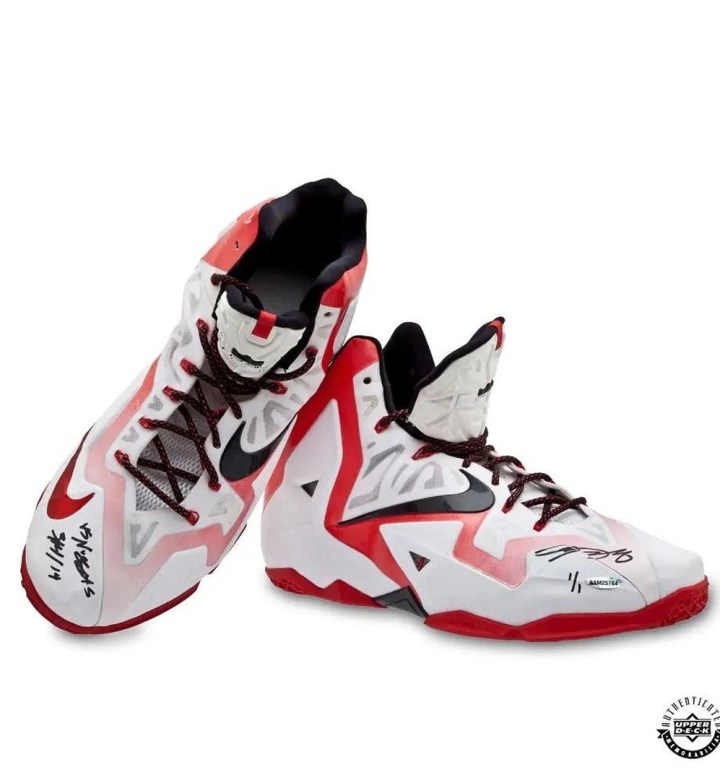 Sneakerheads get ready. We saved the best LeBron James collectible for last. The game worn, autographed and inscribed Nike LeBron 11s are from when he played 40 minutes and scored 21 points with six rebounds and six assists at Denver in a 111-107 loss to the Nuggets. Only one thing could possibly make these shoes more desirable than they are now - and that’s if LeBron doesn’t pass Kareem until March 14, 2023 at home against the New Orleans Pelicans - exactly nine years to the date of when he wore these shoes.

Note: Other game-worn LeBron James shoes can be found here in the Upper Deck store.

Which of these LeBron James collectibles would you most like to own? Shoot us a message on Twitter @137pm and let us know!