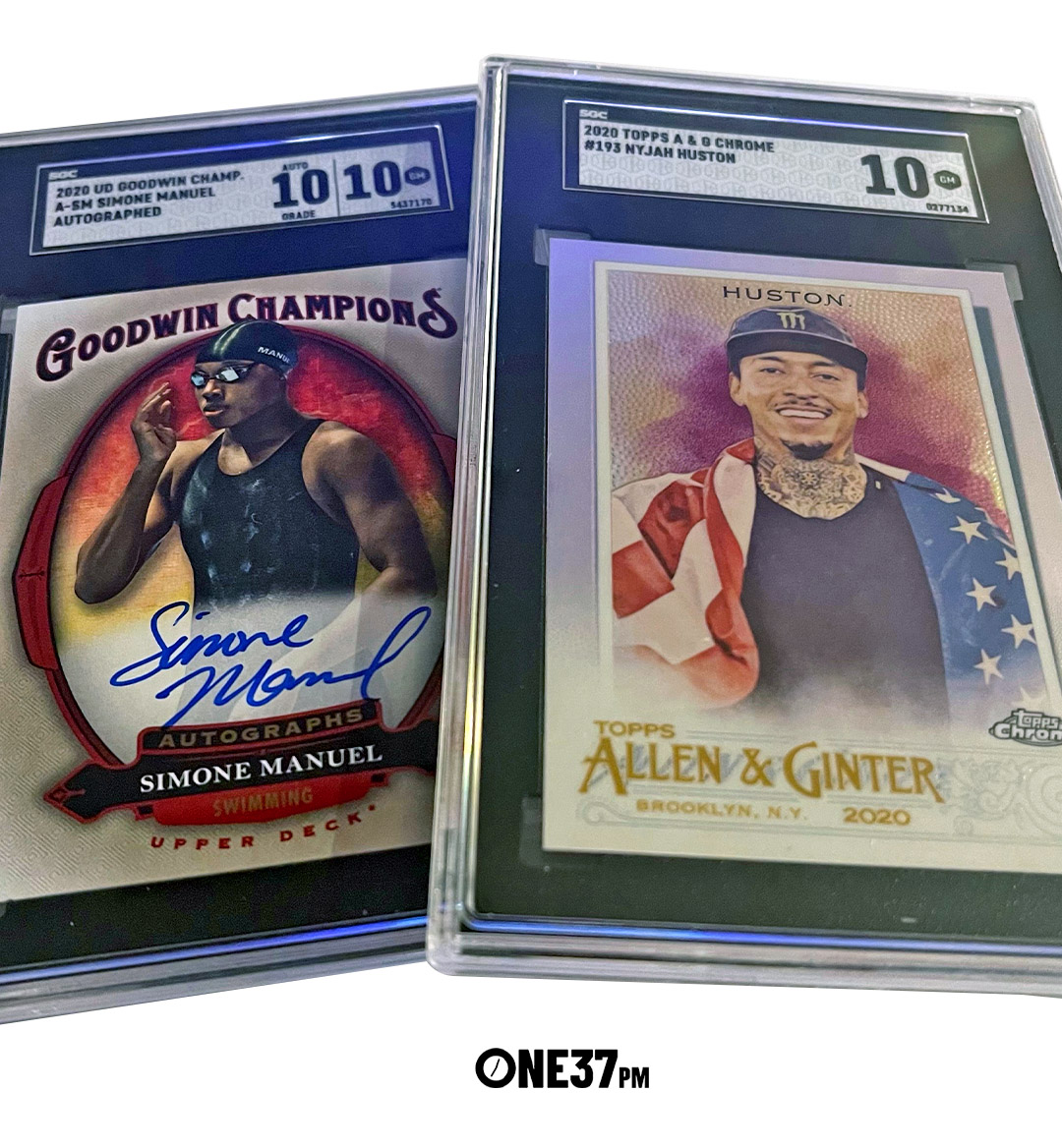 Anybody who has read my content knows how much stock I put into relevance in my sports card flipping strategy. In my experience, relevance is what drives the masses to eBay to make a purchase. In some cases–such as hitting a big shot in a big game–relevance is hard to predict. In others–such as an event like the Olympics–the relevant game is much easier to play.

Once every four years, the world comes together on a grand stage, and athletes from sports that don’t typically get mainstream attention step into the spotlight. Because of the lack of mainstream attention, these athletes also typically have way fewer cards out there than a basketball or baseball player, which plays out well in the supply vs. demand game, while the cost of entry on many of these cards was relatively low.

About two months before the Olympics, I wrote an article about the Top 10 United States Olympic Athletes Whose Cards to Look Out For and thought that it might be fun to buy some of the cards, grade them with SGC at $25/each, put them on eBay a couple of weeks before the Olympics started and see how it all plays out.

Below you will see the results of the play, and hopefully, it will help you plan around other big events that may be coming up, where you can deploy a similar strategy. 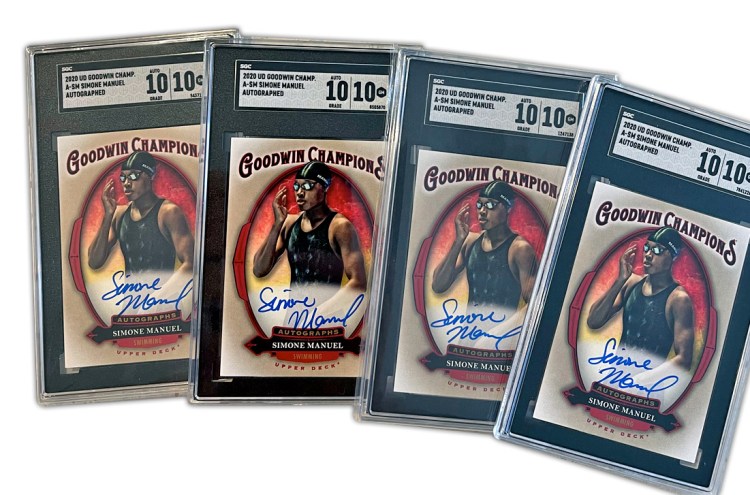 Manuel was one of the first Olympic athletes I set my sights on since she had already won two gold medals and was the first African American to win a gold medal in an individual swimming event. She seemed destined for big things, and it was a safe bet that she would become a household name if she lived up to the pre-Olympics hype surrounding her chase for six gold medals in Tokyo.

However, after being diagnosed with “overtraining syndrome,” which caused extreme fatigue, as well as depression and insomnia, it was a struggle for her even to make it to Tokyo, as she failed to qualify in her signature event in which she won the gold at the 2016 Rio de Janeiro Games, the 100 free. However, she managed to qualify for the 50 free on the final day of qualifiers, which became quite a big story.

Ultimately, the only medal that Simone took home from Tokyo was a bronze for her part in the 4 x 100 free relay.

I did very well here, turning in a $577.12 profit. This is actually remarkable considering Manuel’s disappointing results in Tokyo. Flipping $346.32 in cost into $923.44 in sales was a win, but one can only imagine how much more they might have sold for if Manuel won a few gold medals.

The team that I felt best about investing in heading into Tokyo was the USWNT. When you factored in their high likelihood of making a deep gold medal run, their star power in the mainstream media, and their lawsuit against U.S. Soccer in which they are demanding equal pay to the USMNT, there seemed to be a perfect storm of relevance brewing that I was sure would yield some major profits. 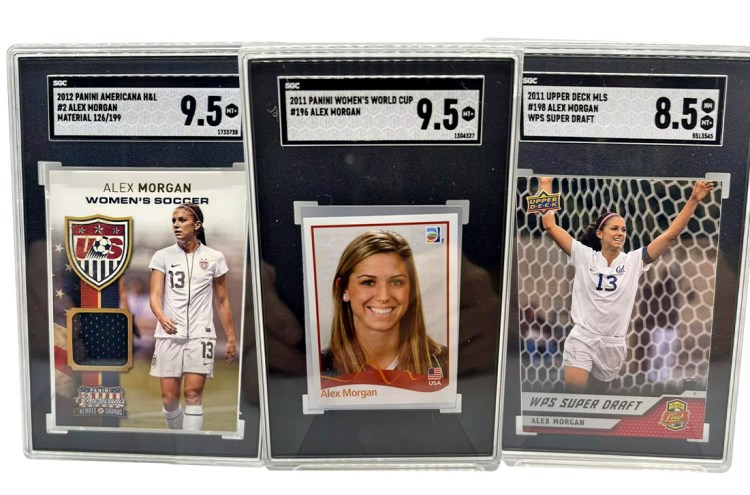 Simply put, Morgan is the most mainstream star in the sport that I felt would get the most attention in the United States during the Olympics. In retrospect, given how strongly I felt about this play, I should have bought more of her cards, but as you will see below, I am not going to complain about the results.

A little while back, I wrote this article about the Top 10 USWNT Cards to Look Out For, so I had already done a ton of research. The 2011 World Cup Sticker set was all over my radar. This was the first time Panini ever produced a Women’s World Cup set, and they didn’t think it would have much interest. Because of that, they only released it in Germany (site of the tournament) and printed extremely limited quantities, making the rookie stickers of Alex Morgan and Megan Rapinoe very difficult to find, especially highly graded copies.

I was able to find two raw copies on eBay, which I purchased from a seller in Germany, and then found a raw game-used patch card numbered /199 out of the 2012 Panini Americana set. All three of these cards came back from SGC graded a 9.5. I also bought one of her raw 2011 Upper Deck rookie cards from a bargain bin in Dallas that had a slightly dinged corner for just $25. These cards were all sold before the Olympics even began.

Again, I will not complain about the results, turning a $433.96 profit. However, I’m not sure why I didn’t purchase more of her cards, as I have always been a proponent of going all-in and trusting your gut in situations like this. By taking my profits and selling all of these cards BEFORE the Olympics started, I shielded myself from the fact that the USWNT played poorly in Japan, taking home the bronze medal. 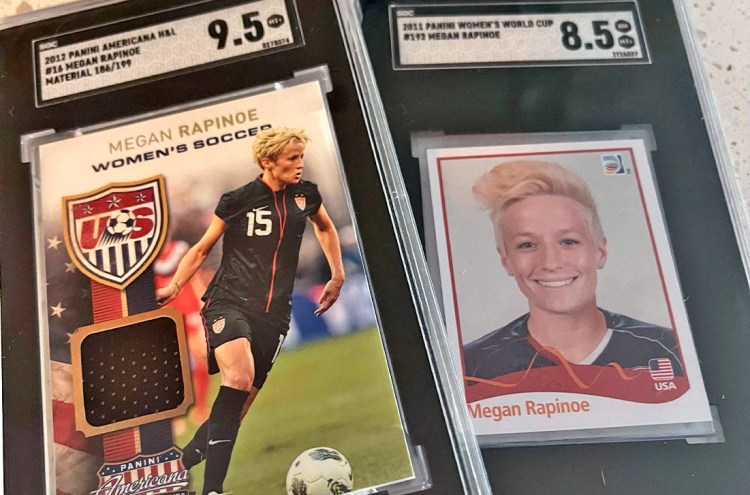 Rapinoe is the vocal leader of the USWNT, and I was fairly confident that she would be all over the media throughout the Olympics and the face of the lawsuit that was generating a lot of buzz in the weeks leading up to Japan. If the United States made another gold medal run, Rapinoe would be the most quotable player on the squad, making her the second most relevant person on the team next to Morgan.

I was able to find one of Rapinoe’s raw rookie stickers on eBay from that same 2011 Panini World Cup sticker set I mentioned above, coming from another seller in Europe. That sticker, unfortunately, was not in as good of shape as the two Morgan stickers I purchased and only came back from SGC an 8.5. However, that isn’t a terrible grade, given the extreme rarity of it. I also picked up a 2012 Panini Americana Game Used Patch /199 (the same set as the Morgan one from above) that also graded an SGC 9.5.

Not exactly a huge win here. I received many early offers on the Panini Americana patch card that I turned down, banking on a gold medal run. In retrospect, maybe I should have taken my profits off the table, but I still have $13.79 in profit and a numbered /199 game-used patch in my collection that is 100% profit if/when it sells. 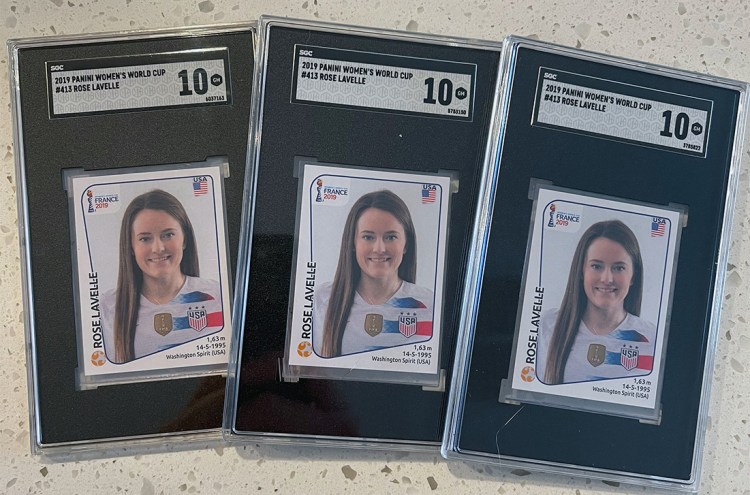 There was a ton of hype surrounding Lavelle as the Tokyo games approached since she appeared to be next in line as the future face of the USWNT after a huge 2019 World Cup performance in which she took home the “Bronze Ball,” awarded to the third-best player in the entire tournament.

I went relatively heavy on Lavelle, banking on her taking a big leap on an aging team and having a huge showing in Tokyo. I picked up (8) of her raw rookie stickers from the 2019 Panini Women’s World Cup sticker set in one lot. They came back from SGC with (3) SGC 10s and (5) SGC 9.5s.

This one didn’t work out as planned, with her scoring only one goal in the entire tournament. The offers were coming in fast and furious after she scored a goal during a 6-1 group stage blowout of New Zealand. Another lesson learned here, don’t be greedy. I received multiple $300 offers for the SGC 10s but held out, thinking I could do better. If I only sold ONE of them, This play would have been profitable, and I would still have been holding two more 10s and 3 more 9.5s. Either way, I now own three SGC 10s and three 9.5s for a total cost of $177.06. I plan to stash them away until the World Cup in 2023. 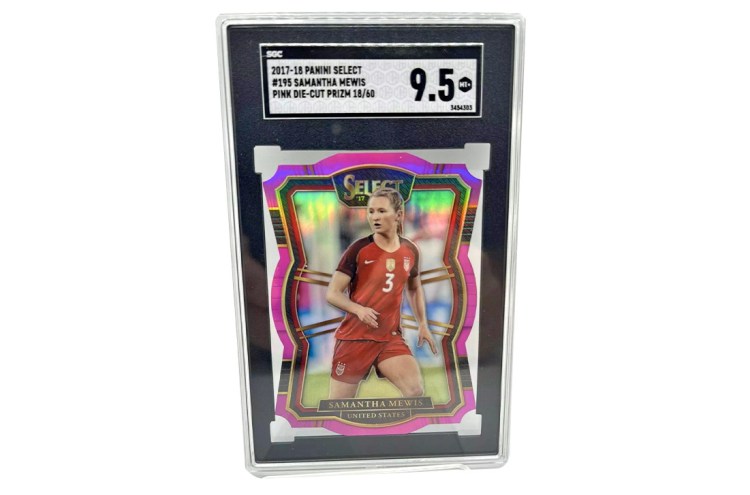 Mewis is another player that I had my eyes on as a possible emerging star. When searching for her cards, I came across a 2017 Panini Select Die-Cut Pink /60 that I felt was way underpriced. I picked it up, and after sending it out to SGC, it came back graded a 9.5

This card netted a $65.02 profit, and it’s probably a good thing that I sold it shortly after the Olympics kicked off, given the disappointing showing for the USWNT. It wasn’t a HUGE play, but anytime you can turn 60%+ profit margins on a quick flip, it’s a win. 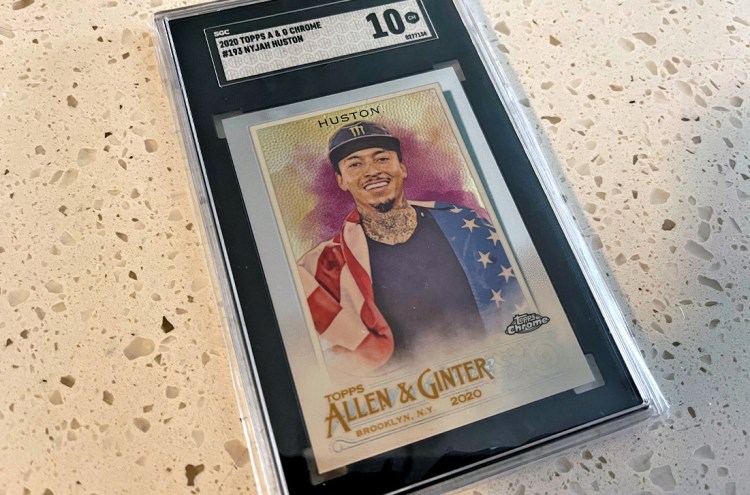 Nyjah Huston was my sneaky play of the Tokyo Games, competing in Street Skateboarding, making its first appearance as an Olympic sport. Huston has over 4.9 million followers on Instagram alone. I assumed that with his mainstream popularity, combined with the fact that he was a big favorite to take home the gold, as well as the only cards I could find of him being in the Topps Allen & Ginter set, there would be massive demand compared to the supply of his cards available.

I only picked up one of Nyjah’s Allen & Ginter cards, a raw silver copy that appeared super clean in the eBay listing. After sending it out to SGC, I was extremely happy when it came back graded a Gem Mint 10. It generated a ton of interest right off the bat after I listed it at $700 (or best offer). Within the first few days, I received multiple offers ranging from $200-$375, declining them all and deciding to roll the dice that he would win the gold, and I would get closer to my $700 asking price. Unfortunately for me, he shockingly flopped in Tokyo, failing to even win any medal after missing his last 4 jumps and finishing in 7th place overall. The card now remains unsold.

This is another example of risk vs. reward. I could have cashed out early and taken my $375 off the table, but I banked on this legend stepping up on the grand stage. That gamble did not pay off this time, but I still feel good about owning the card and Nyjah’s mainstream relevance. I will be able to sell it and at least recoup my money, but the big profits won’t be there this time. 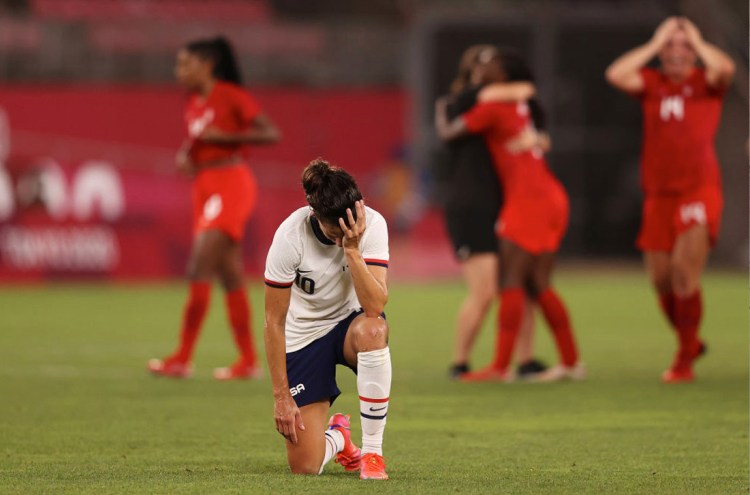 My final tally on these plays reads:

The shame of this entire play is that I invested in huge favorites, all of which had rough showings in Tokyo. Who could have predicted Simone Manuel, Nyjah Huston, and the USWNT all failing to capture gold medals?

With that said, even given their relatively poor performances, I was able to turn $1484.99 into $2257.82 PLUS (8) graded cards that will eventually sell. I feel great about the way this all played out–as I now have those cards in my collection to flip at a later date–but I can't help but think about how much better the results could have been! With that said, if you had placed a bet on any of them to win a gold medal, you would have lost all of your money. By gambling on them this way, I still came out ahead.

Biggest Regret: Rose Lavelle - Not selling all of her stickers after the New Zealand game.