The 14 Best 'Mortal Kombat' Games of All Time 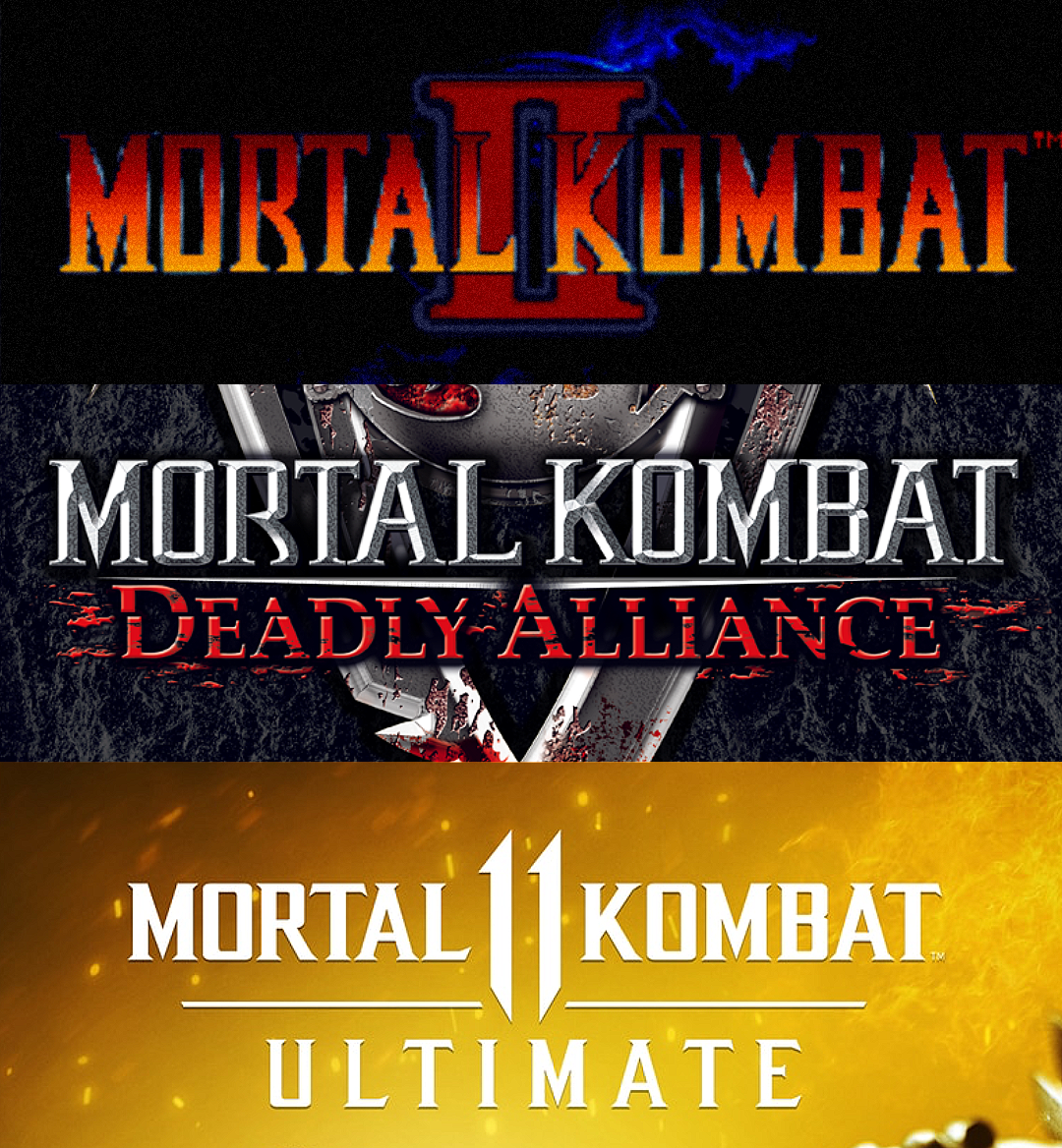 The smoky, dingy, and oh-so-loud arcades of the 90s were ruled by fighting games. Between the game publishing arms of Capcom, SNK, and Acclaim/Midway, there existed the triangle of excellence known as Street Fighter, The King of Fighters, and Mortal Kombat. Speaking of Mortal Kombat, the very first installment in the series delivered an equal amount of shock and awe due to its over-the-top violence and unrelenting gore. So much so that the gaming industry was forced to regulate itself by introducing the Entertainment Software Rating Board after the government tried to step in to get violent video games under control. To say that MK is a groundbreaking game and a trendsetter would be an understatement. Now's the perfect time to celebrate the series that made the phrase "FINISH HIM!" pop culture gold by listing off the 14 best Mortal Kombat games of all time.

This is the game that started it all. Ed Boon, John Tobias, John Vogel, Dan Forden, and a collective of other talented video game developers came together to craft one of the most groundbreaking fighting games of all time. The use of digitized graphics and the incorporation of over-the-top violence caught everyone off guard at first glance. Playing the actual gory game itself led to a newfound group of gamers that basked in all the brutality and bloodletting that transpired during every one-on-one encounter. The origins of iconic fighting game characters, such as Lui Kang, Johnny Cage, Scorpion, and Sub-Zero, took place here. And from that point forward, the fighting game genre rose to another level thanks to Mortal Kombat's bloody uppercuts and match-ending Fatalities.

Mortal Kombat II's original launch back in 1993 was monumental. It dominated the arcades just like its predecessor and did so by adding the series' lofty lore, adding new finishers to the game that were equal parts merciless and hysterical. This game's huge uptick in graphics made everyone look even better than their previous selves, which meant all the onscreen ruthlessness appeared even crazier than before. This amazing sequel also gets a special nod here for marking the debut of these fan-favorite characters - Kitana, Mileena, Kung Lao, Noob Saibot, and Shao Kahn. MKII is one of the best Mortal Kombat games and fighting games period.

Mortal Kombat 3 pushed the series to another plateau that pleased fans to a great degree. The bloody fisticuffs and other assorted martial arts contained within this fighter move at a much faster pace, plus the signature savagery the series is known for stayed amazing. The combo-heavy nature and newly added run button of MK3 added another level of excitement to the game and certainly made watching two expert players go at it a super hype affair. The debut of "Animalities" and the inclusion of likable newbies (such as Cyrax, Sindel, and Sheeva) marks MK3 as a monumental step forward for the IP.

The original MK3 is great enough on its own, but this updated rendition gave it all the extra bells and whistles that made it so much better. Ultimate Mortal Kombat 3 offers plenty more gorefest clashes by adding in new combos, 2v2, an eight-player tournament mode, and an even more demanding difficulty mode. New battlegrounds are also thrown into the mix to freshen up all the scenery. And the new and improved graphical representations of Kitana, Jade, Reptile, and Scorpion expanded the already strong roster. Ermac, Mileena, and Classic Sub-Zero ended up being the cherry on top for UMK3's new and improved final roster.

"BRUTALITY!" The inception of that modern-day Mortal Kombat staple came in Mortal Kombat Trilogy, which is the ultimate celebration of the original 2D games. Everybody and their grandmother popped up here to throw hands, pull off decapitations, and assault each other in the most vicious manner possible. The additional debut of the "Aggressor" meter did a commendable job of throwing in another game-changing mechanic that awarded players with increased strength/speed once it's filled. The presence of so many classic character designs and stages from MK 1, 2, and 3 does so much to make MK Trilogy such a joy to play as a diehard fan.

We know a lot of slander is thrown Mortal Kombat 4's way, but we're among that group of fans that has way more love for it than most. The game's fully 3D visuals offered a huge jump from what was on display during the original trilogy. And that meant all the blood-soaked battles became that much more wince-inducing. Being able to whip out a weapon to dish out even more painful beatdowns is still an amazing mechanic worth taking advantage of in this fighter. As far as new characters go, Fujin, Quan Chi, and Tanya stood out the most as the main ones worth caring about. MK4 left all the silliness of previous games behind to get more serious again, which ended up being the right move to make for such a massive sequel.

There was an excruciatingly long wait for another mainline Mortal Kombat after 1999's Mortal Kombat Gold. Once 2002 rolled around, Ed Boon and the rest of his development studio brethren came back in a major way with a retooled 3D rendition of what fans came to greatly appreciate. Mortal Kombat: Deadly Alliance evolved the series' battle mechanics via multiple fighting styles for each character and open arenas that allowed for sidestepping. The roster also got some welcome upgrades of their own - everyone looked far more bulkier and intimidating in comparison to their 2D counterparts. On the debuting "Kombatants" side of things, fresh faces like Frost, Kenshi, and Nitara fit right in with the series' returning roster members. Man - this game's intro shocked the hell out of us and everyone else back in the day! RIP Lui Kang...

Mortal Kombat: Deception followed the new 3D formula put in place by its predecessor and produced the type of refinement that fans and critics applauded. The stage layouts led to even more craziness now that you could knock your opponent into different parts of them. And with deathtraps put in place, it was also possible to nab the win in just a few seconds by kicking them right into a match-ending stage interactable. The "Combo Breaker" also ended up being a nice change-up and gave off some definite Killer Instinct vibes. It's also dope how you can still get a ton of entertainment out of the "Chess Kombat" and "Puzzle Kombat" side modes! MK: Deception took what came before it and made it that much better.

Mortal Kombat Mythologies: Sub-Zero? Horrendous. Mortal Kombat: Special Forces? A steaming pile. Mortal Kombat: Shaolin Monks? Two-player perfection! This action/adventure-themed Mortal Kombat spinoff is way better than it has any right to be - instead of being a terrible cash-in, this game unexpectedly excels. Lui Kang and Kung Lao come together to juggle their foes in the air and pull off sick Fatalities as they make their way through the insane events of Mortal Kombat II. The game's intuitive multi-directional combat system, super fun versus mode, and inclusion of an arcade-perfect version of MKII all combine to produce a must-play package. We're so glad MK went the God of War route here to offer longtime fans something different yet still familiar all at the same time.

Mortal Kombat: Armageddon might just have one of the greatest video game intros anyone has ever laid eyes on. It's amazing to the point where you have to sit and watch it every time you boot this fighter up. And once you make it past that epic cinematic, you're treated to the MK Trilogy version of the mid-2000s 3D series entries. Anyone and everyone that appeared in every MK game up until this point entered this grand finale tournament in a bid to defeat Blaze. On a gameplay level, MK Armageddon stuck to what worked before in Deadly Alliance and Deception. Also, you could now create your own fighter and make up your own Fatalities on the fly. This game's "Konquest" mode was infinitely better than the last version of it, plus there was a ton of fun to be had in "Motor Kombat."

Never in a million years would anyone have pitted the likes of Batman against Scorpion. But somehow someway, Warner Bros., DC Comics, and the now defunct Midway Games joined forces to present one of the craziest crossover fighting games anyone's ever played. Mortal Kombat vs. DC Universe was the first sign that Ed Boon and his staff were capable of producing deep story modes that put the game's roster in climactic situations. And when it came time to enter the heat of battle, this fighter turned out an applause-worthy performance. Yes, we hear you - there's really no blood to speak of and most of the Brutalities are underwhelming. But there's still much to enjoy about this crossover fighter - the awesome roster, vicious combos, hard-hitting stage transitions, and quality story mode are all the reasons why.

The 2011 reboot of Mortal Kombat marks one of the greatest comebacks in gaming. You have to mention this franchise refresh every time the best Mortal Kombat games enter the conversation. This return to form for Mortal Kombat lets players play with their favorites within incredibly fast-paced clashes that feel like a natural evolution of Mortal Kombat 3. The debut of X-Ray maneuvers, the inclusion of tag team battles, and the usage of special guests such as Kratos and Freddy Krueger add to this game's worthwhile package. Turning back the clock on Mortal Kombat's mythology worked like a charm here and reverting back to the 2D combat styling of the past returned the series to its 90s prominence.

Mortal Kombat X truly pushed the series forward in a shocking manner. Each character arrived with three variations that practically gave players three playstyles to master. The darker art style added to the game's mature allure and made its jaw-dropping Fatalities and X-Ray supers look even more shocking than ever before. As far as combo-heavy Mortal Kombat series entries go, this one gets the nod for having the craziest ones we've seen to date. Which is part of the reason why it's still being played in various FGC circles. The return of the run button is the main reason why this game's wild combos are such a blast to pull off. Mortal Kombat X hits on every level as a great fighting game, one of the best Mortal Kombat games ever made, and is another fine example of NetherRealm Studios' attention to detail.

Mortal Kombat 11 embraced a somewhat slower tone to offer players a more methodical and footsies-based fighter that evokes memories of Mortal Kombat II. Getting to customize every "kombatant" in the game to your liking via alternate costumes and special moves gave rise to so much player creativity. It's still mindblowing for us to witness two different versions of Frost come to blows and utilize their own special abilities that differ from each other. Mortal Kombat 11 is easily the best-looking installment in the series to date and also gets a ton of love for offering a content-rich experience for everyone that hops into it. And the story mode? It's just as amazing as NetherRealm Studios' previous cinematic efforts.