The 12 Best 'Street Fighter' Games of All Time 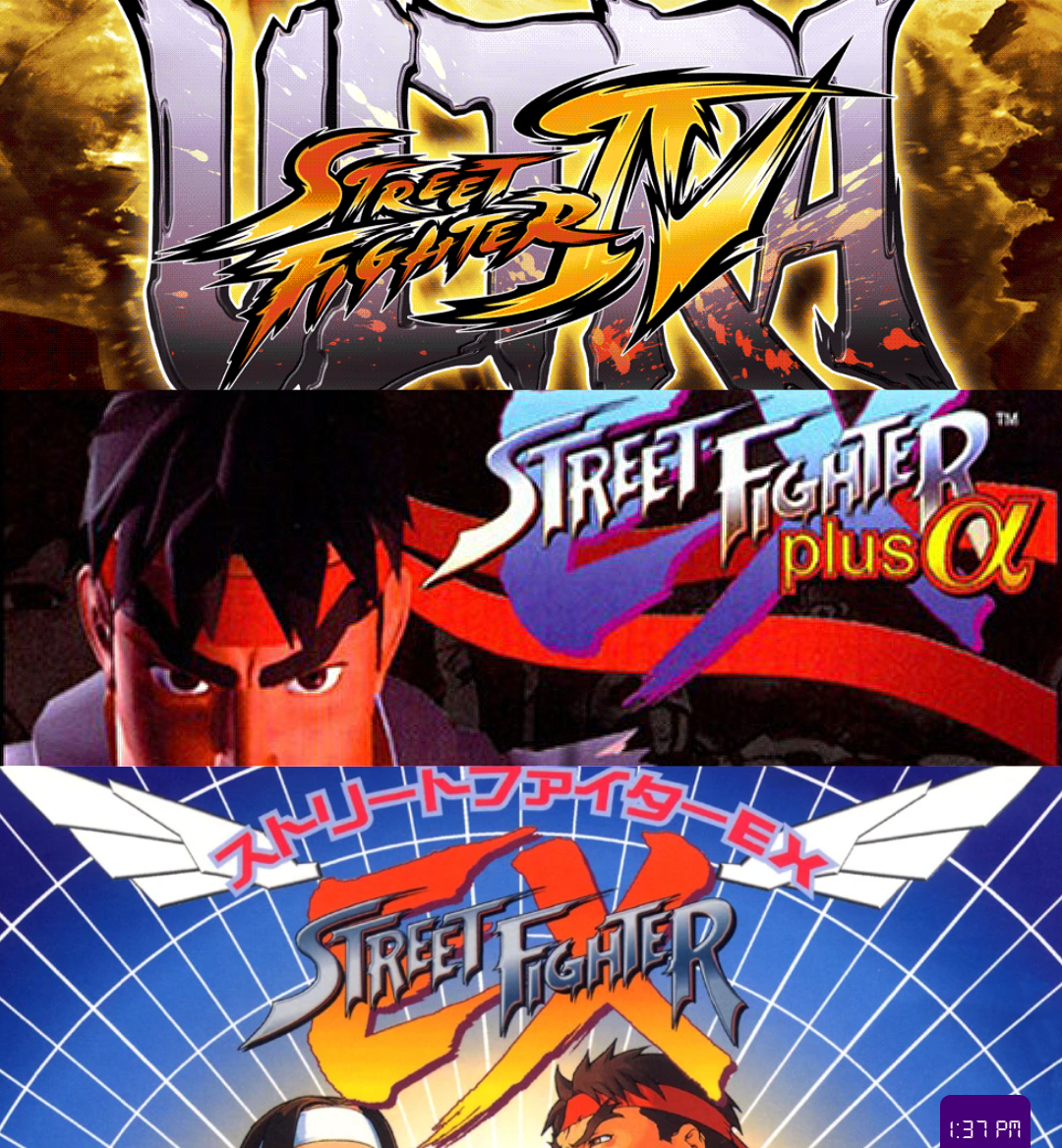 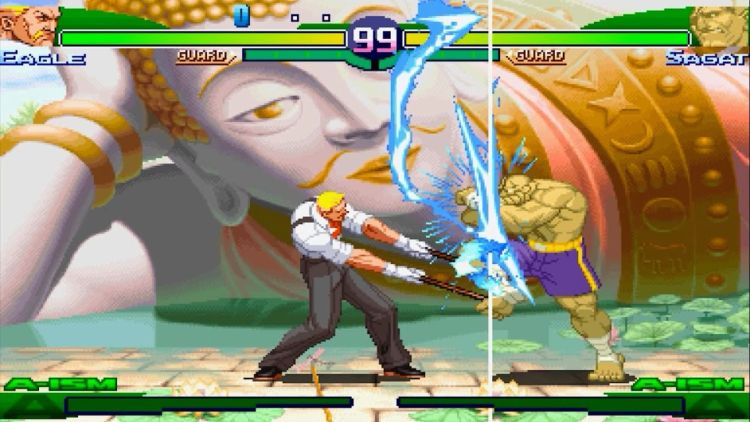 Street Fighter's 1987 arcade debut didn't move the needle whatsoever. The game simply didn't feel right when it came to landing blows and pulling off special moves. When Capcom returned to the drawing board and returned with Street Fighter II: The World Warrior in 1991, the series quickly became fighting game royalty. After a series of updates that increased the game's overall quality, the king of fighting games got its most definitive update in the form of (*takes a deep breath...*) Super Street Fighter II Turbo. The addition of hype super combos, air combos, and the iconic debut of Akuma came together to make this iteration of Capcom's golden boy absolute god-tier material.

The handshake that shook the very foundations of both the comic book and gaming fandom was the one that took place between X-Men's Cyclops and Street Fighter's Ryu. X-Men vs. Street Fighter pretty much brought a childhood dream scenario to life in the form of one of the greatest team-based fighters ever made. This game is a natural progression of Capcom's Marvel Comics-branded fighters and got the ball rolling on the "Vs." sub-series of crossover fighters. To see the likes of Sabretooth and Rogue come to blows with Akuma and M.Bison was mindblowing at the time of the game's arcade inception. The over-the-top super moves, gorgeous anime art style, and 2v2 gameplay are what push this Capcom classic onto this list.

Like the Street Fighter series itself, the "Vs." games got an updated rendition of its own. And this time, a couple of faces from the Marvel Universe linked up with the X-Men to present a loftier challenge to Capcom's "World Warriors." Marvel Super Heroes vs. Street Fighter brought together the likes of Captain America, Spider-Man, and Blackheart to this crossover clash with Street Fighter roster additions such as Dan and Sakura. The amazing 2v2 mayhem that pushed X-Men vs. Street Fighter to near perfection returns here, plus the newly introduced "Variable Assist" opened up new avenues for jaw-dropping combos. Big shout out to this game for introducing Cyber Akuma to the mix!

Thanks to the rise of 3D gaming in the mid-to-late-90s, fighting games chose to evolve alongside that bubbling trend. Sega came to the fight with Virtua Fighter, Namco arrived with Tekken, and Sony even came through with Battle Arena Toshinden. Street Fighter took the 3D leap and ended up producing an experience that stayed loyal to the 2D games' format and also introduced some memorable fighters to the fray. Developer Arika included familiar characters such as Ryu, Sakura, and Guile while also debuting the likes of Skullomania, Allen Snider, and Garuda. Street Fighter EX Plus α is the best version of this 3D spinoff - check it out for the first time ever and you'll fall in love with the exciting "Cancelling" and "Super Canceling" mechanics.

Street Fighter Alpha 3 has some of the best console ports Capcom has ever put forth. The Sega Saturn, Playstation, and Game Boy Advance editions expanded the roster to include some expected and unexpected pugilists. Then there's the PSP version, which is highly regarded as the most complete port of this game. Street Fighter Alpha 3 MAX features 38 characters, super decreased loading times, a ton of modes, more character art for their Arcade Mode storylines, etc. And with all that, you get the already excellent Street Fighter Alpha 3 template that's lifted by the clever "Ism" system. This game will forever stick out due to just how overpowered M. Bison ends up being as the ultimate final boss.

Street Fighter III: 3rd Strike will forever hold a spot on the Mt. Rushmore of fighting games. It's still played feverishly by the most hardcore members of the FGC and longtime Street Fighter followers. The game stands tall thanks to an amazing roster, god-tier music, and battle mechanics that focused on footsies & careful parries. The best way to play this perfect 2D fighter is by plugging in a PS3 or Xbox 36o with the Online Edition still loaded onto either console's hard drive. What that version offers is a whole bunch of swaggy new color schemes for each fighter and a near flawless netcode that allowed for online clashes that felt like you were playing someone sitting right next to you. Street Fighter III: 3rd Strike Online Edition is the much-preferred way to experience Street Fighter at its absolute finest.

*takes an extremely long breath* Super Street Fighter II Turbo HD Remix was and still is a valiant effort from the good folks at Capcom, developer Backbone Entertainment, comic book studio UDON Entertainment, and music arranger OverClocked ReMix. All of their combined efforts led to one of the best graphical updates Street Fighter II has ever received. The iconic fighters from the OG games came back with a refined look via bilinear interpolation, which made them look far better than their 90s counterparts. The stages themselves also got a welcome makeover, which made every fight look extra easy on the eyes. It's definitely worth getting the Switch port of this game (Ultra Street Fighter II) to see why we adore this fighter so much.

The names Yoshinori Ono and Seth Killian mean the world to the FGC at large. And that's because, during their time spent at Capcom, both men's work became associated with the biggest comeback in fighting game history. The 2008 launch of Street Fighter IV led to an FGC renaissance that also reignited the flame for Ryu and the rest of the "World Warriors" roster. By the time Ultra Street Fighter IV came around in 2014, fans were treated to the best final update possible. The roster ballooned to include so many different generations of Street Fighter, the "Red Focus" attack added even more depth to the game's combat mechanics, and the "Double Ultra" option threw in an extra bit of fun factor to the battles at hand. Props have to go out to USF4 for its "Omega Mode" variation that really added an extra bit of unbalanced zaniness to every character's moveset.

When it comes to fighting game crossovers, this one turned out to be one of the more unexpected (yet still delightful!) collabs ever created. Capcom's king of 2D fighters mashed up with Bandai Namco's "King of the Iron Fist Tournament" franchise to create a super hype 2v2 fighter called Street Fighter X Tekken. It's still such a trip to have an actual fighting game where you can team up Ryu & Jin to take on Chun-Li & Asuka. This team-based clash of styles performs well and sticks close to its source material by incorporating familiar Tekken combos and cool rivalries between both members of the roster. While the launch version of this game tripped out the gate, the game's extensive 2013 update improved things for the better. Now Street Fighter X Tekken is in its best state thanks to an increased fight speed, much-needed character buffs, and so much more.

This passion project came together due to the efforts of Capcom, developer/artist Singaporean fan developer Seow Zong Hui, and composer George Papapetrou. And thanks to those efforts, Capcom fanatics received an amazing throwback action-packed platformer that mashed up two of the best franchises from the lauded Japanese publisher/developer. Taking the "Blue Bomber" through 8-bit stages just like the good old days got an uptick in excitement thanks to the addition of bosses lifted straight from Street Fighter's roster. The fact that you can take on Akuma as a final boss in this crossover gem is an incredible nod to Street Fighter II's longtime history. Street Fighter X Mega Man is a beloved love letter to Capcom fanboys and fangirls.

Everyone and their grandmother know Street Fighter V started off in a really rough place. Its 2016 launch was marred by a lackluster launch roster, a lack of content, and gameplay mechanics that weren't really landing all that well with longtime fans. But as time went on, the devs behind the game did all the work in the world to make sure it rose to the occasion like previous installments. The roster solidified itself as one of the best in the series, new mechanical adjustments were implemented to improve the moment-to-moment gameplay, and a wealth of single-player modes gave owners a whole lot more to enjoy alongside the quality local/online multiplayer suite. In its final state, Street Fighter V is one of the most feature-rich fighters on the market. V-Skills and V-Triggers for the win!