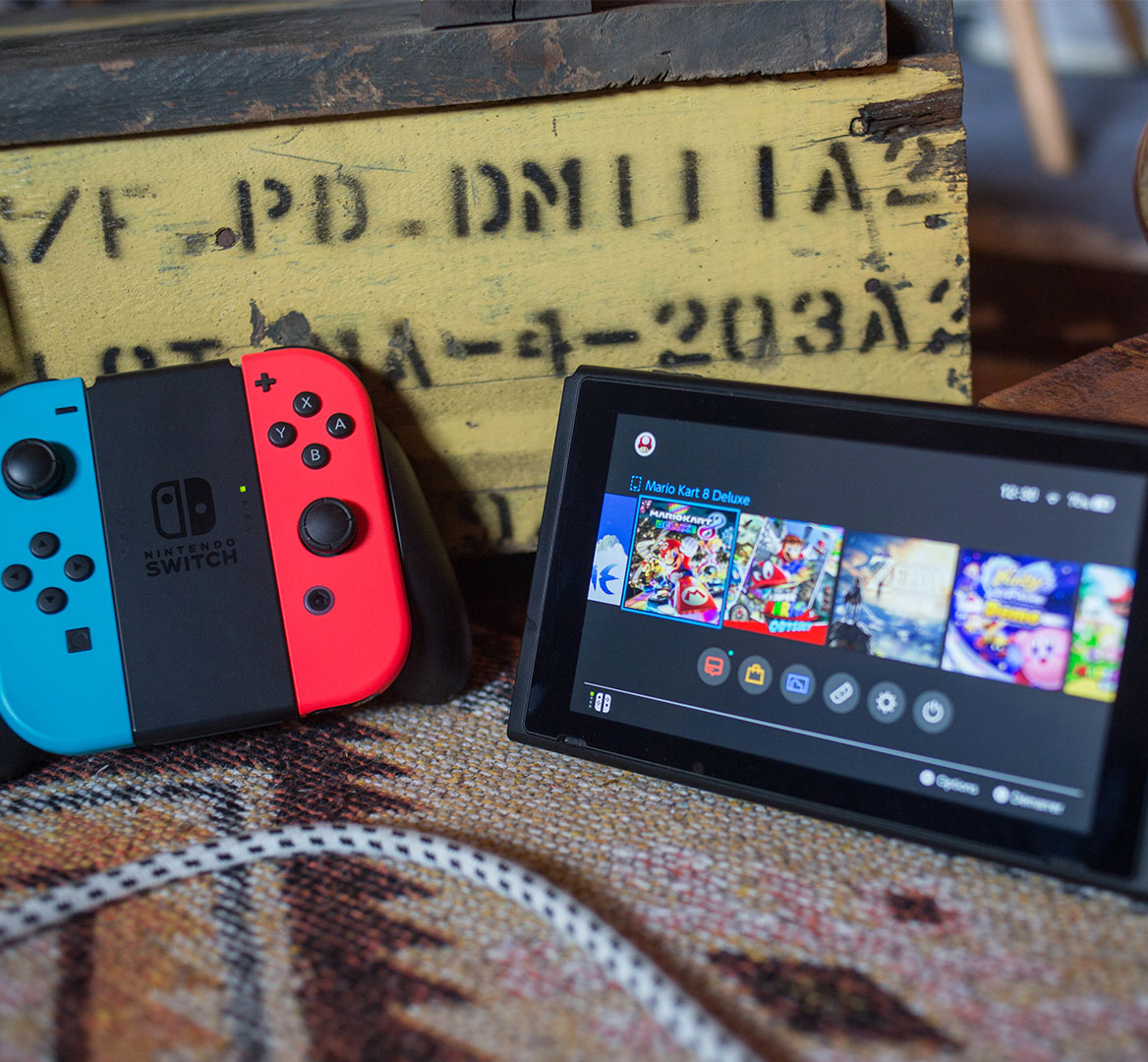 It seems like everything that lands on the Nintendo Switch gets welcomed with open arms. Ports of first-party and third-party games from previous generations have transitioned over to the mega-successful home/console gaming system and have been gifted with a new fanbase to entertain.

As of December 2019, the Nintendo Switch has sold a total of 52.48 million units. This all means that the console’s install base is massive and willing to play anything and everything that the platform offers. The following lineup of games listed below rank the highest when it comes to the best-selling games on the Nintendo Switch. And to the surprise of no one, they all just happen to be titles exclusive to Nintendo’s home/portable gaming device.

This first-party fighting game was released alongside the Nintendo Switch as a launch title that set itself apart from its genre competitors. Its willy cast of long-limbed combatants squared off in wide arenas and threw devastating punches across the screen in a knockdown, drag-out brawl. Switch owners needed a good brawler on day one and ARMS was the best option to go with.

Nintendo has gone out of its way to develop games and peripherals that emphasize staying in tip-top condition. Ring Fit Adventure is the latest venture in the company’s exercising agenda as it offers a Ring-Con device that helps users track their movements. The use of turn-based RPG mechanics that call upon you to perform battle movements via fitness routines is genius and rewarding.

Retro Studios is masterful when it comes to producing amazing platformers. This port of the development studio’s Wii U Donkey Kong Country adventure keeps everything that made the original such a sought-after classic. In addition, the Switch version brought along with it new control schemes and a playable version of Funky Kong via the game’s “Funky Mode.” Anyone who has a Switch is obligated to have this as a part of his or her gaming library.

The pink ball of destruction that’s known for sucking up everything in its path got to enjoy a new lease on life on the Switch. Kirby Star Allies may not have gotten a lot of positive reviews, but its fanbase still ran out to get a copy of it. The addictive co-op gameplay gave way to special attacks, which led to a lot of character mixing and matching between 4-player teams. Add in the overwhelming cute factor for this game and you have all the fuel you need to push this title even further up the Switch games sales chart.

The wait for a traditional Fire Emblem game on the Switch was long but so worth it by the time it finally arrived. Fire Emblem: Three Houses offered strategy RPG enthusiasts a lengthy, worthwhile journey filled with political strife and climactic battles. The clever school system introduced a new method towards building relationships with your allies and acquiring Combat Arms learned from everyday studies. The response to Three Houses was extremely positive and it’s a well-warranted one.

Creating an all-new entry in the more casual gamer friendly Animal Crossing series for the Switch was a no-brainer for Nintendo. The cutesy life simulator works great as a portable time waster – Animal Crossing: New Horizons proves that fact as undisputed. The improved visuals, local/co-op options, and new concept of having players inhabit their own island have made New Horizons into a bonafide hit with fans and newcomers alike.

Whenever the lovable denizens of the Mushroom Kingdom get together to play some sports, a ton of Nintendo fanatics always seem to take notice. Mario Tennis Aces brought back the fun of pitting several Super Mario characters against each other in fast-paced tennis matches. New characters joined the proceedings, motion controls were added in and the trick shot ability gave way to some pretty exciting turnarounds during each game.

Here’s another Switch launch game that curious gamers flocked to in droves. It was clearly a sort of tech demo for the amazing capabilities the Joy-Con controllers are capable of. The minigames on hand here were clever and provided some hilarious hijinks for Switch owners in a party setting. 1-2-Switch’s relevance to the current Switch lineup has fallen incredibly low, but it still managed to sell boatloads of copies.

As far as remakes go, The Legend of Zelda: Link’s Awakening is one of the best. It successfully breathed new life into a Game Boy original by throwing a fresh coat of paint onto its visuals. The gameplay remained unchanged, which is actually a good thing considering how great the original version was. The customizable dungeon mechanic gave this remake some extra shelf life beyond its main campaign and kept Zelda fans quite pleased with their purchase.

Super Mario Maker 2 is one of those games that has unlimited replay value. On top of the developer curated campaign this sequel offers, creative stage designers across the globe kept Super Mario fans busy with their creations. The newly added Super Mario series aesthetics and retooled course design mechanics did a commendable job of making this entry an easily recommendable buy.

Mario’s brother has struck out on his own via the Luigi’s Mansion franchise. The third entry in the series easily took top honors as the best game in the series. The haunted hotel setting gave way to ever-changing environments full of wily ghosts to capture and clever puzzles to solve. Plus the game’s unmistakable charm and addictive multiplayer modes pushed Luigi’s Mansion 3 even further to greatness.

The old school 2D platforming feel of this former Wii U exclusive thankfully got the Switch port treatment. With a total of 164 courses on deck and the inclusion of the New Super Luigi U expansion, this classic platformer arrived as a jam-packed love letter to Super Mario enthusiasts. The huge array of power-ups and playable characters also lent itself well to filling out New Super Mario Bros. U Deluxe’s content suite quite nicely.

The announcement of a brand-new Mario Party elicited plenty of excitement amongst its player base. Once it released, that excitement transitioned into high sales. New minigames were thrown into the fold along with online multiplayer, plus the unique Partner Party mode offered a nice callback to Mario Party: Star Rush. Super Mario Party is another multiplayer treat included among a huge lineup of comparable titles in the Switch library.

Nintendo gave rise to a brand-spanking-new IP on the Wii U with the first Splatoon. Once the sequel arrived, its player base expanded since the Switch install base was significantly larger than the Wii U’s. Splatoon 2 improved upon its predecessor’s third-person shooter mechanics, added a wealth of new weapons, threw in a surprisingly great single-player campaign and filled out its package with the tough but fun Salmon Run mode.

Before Pokémon Sword and Shield landed on the Switch, Game Freak decided to whet players’ appetites with dual remakes of 1998’s Pokémon Yellow. To the surprise of no one, a console rendition of the traditional pocket monster capturing/battling formula sold like hotcakes. This combined Pokémon juggernaut was the perfect appetizer for the next batch of Game Freak goodness.

Once the Pokémon franchise graduated to the Switch with an all-new adventure, fans flocked to it in droves. Pokémon Sword and Shield brought with it 81 new creatures to capture, train and fall in love with. 13 regional variants of past monsters also made the game’s collectible roster even more interesting than past iterations. The Galar region provided a fresh new setting and provided longtime fans with a UK inspired region to catch ‘em all in.

When Link returns for another round of Master Sword swinging and rupee collecting in a massive open-world, a whole lot of gamers take notice. With The Legend of Zelda: Breath of the Wild launching alongside it, the Switch became a day one success. And it’s easy to see why – The Breath of the Wild’s gorgeous art style, open-ended approach to mission completion and phenomenal open-world design made the system it launched on a destination for many.

Mario’s latest foray into open-world 3D platforming captured plenty of gamers’ imaginations and kept the world’s most famous plumber in the limelight. Super Mario Odyssey’s top-notch platforming, catchy soundtrack and unique implementation of an anthropomorphic hat named Cappy quickly pushed it to the top of the Switch sales charts when it first launched.

Nintendo’s all-star brawler has earned its status as one of the best-selling fighting games of all time. Every Nintendo console since the N64 has featured an entry in the Super Smash Bros. franchise for good reason – its formula of “beat down gaming’s greatest icons with your friends” has never faltered. Super Smash Bros. Ultimate is the pinnacle of the series and is still pulling in big sales thanks to extra DLC characters and constant updates.

You can’t own a Nintendo console without a Mario Kart game. It’s just unfathomable at this point. This former Wii U exclusive got the upgraded port treatment and became the one game that every Switch owner has to own. New racers, expanded Battle Mode options, and retooled item-carrying mechanics made this kart racer better than ever. Mario Kart 8 Deluxe is pretty much a required purchase for every potential Switch owner.