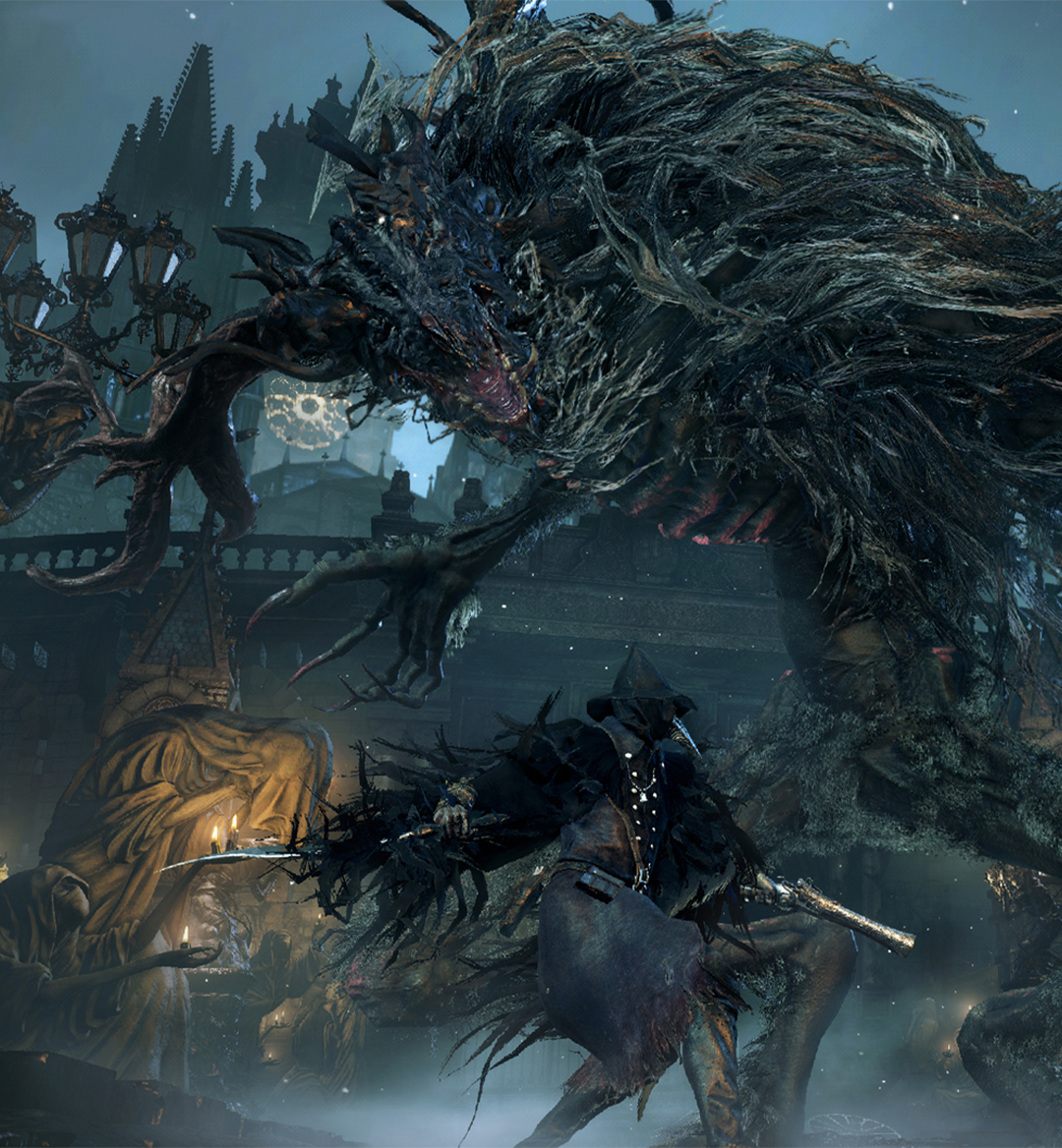 If you, like much of the rest of the gaming world, enjoy Elden Ring, it's clear you like a challenge. Regular folks might say you like your games to be obtuse, for them to withdraw support when you feel you need it most. You say you're a "Soulslike" fan.

But what does that mean? It's simple, really. You enjoy the austere, unforgiving worlds of games spawned after FromSoftware's PlayStation 3 title started it all: Demon's Souls. Arguably, the "genre" began with earlier FromSoftware titles like King's Field or Shadow Tower, but for the sake of argument, Demon's Souls is what started many down this path.

You like what you like. No one's about to judge you for that. And we all know that Soulslike games are indeed an acquired taste. But if you've been loving Elden Ring (and maybe growing as a person as you work through it), there's more where that came from. We know. You're probably plotting a course right now for your next fix of Soulslike goodness because eventually, Elden Ring will end. It's just the way of the world.

But your time with games (very much like) it doesn't have to. We've lined out some of the best Soulslike games out there that you should focus your attention on next. As a courtesy, you understand. Just for you.

Here are the 10 best Soulslike games for Elden Ring fans, in no particular order.

If you take Dark Souls and combine it with Victorian sensibilities, then toss it with a bit of even darker fantasy, you get Bloodborne. Despite the similarities, Bloodborne does have some essential differences that make it enticing all on its own. It's a more offense-oriented game that rewards brute and decisive action. It's still got all the great exploration and complex combat of Dark Souls, but it puts enough of a spin on the formula to be a great game in its own right.

If you take Dark Souls and combine it with Victorian sensibilities, then toss it with a bit of even darker fantasy, you get Bloodborne. Despite the similarities, Bloodborne does have some essential differences that make it enticing all on its own. It's a more offense-oriented game that rewards brute and decisive action. It's still got all the great exploration and complex combat of Dark Souls, but it puts enough of a spin on the formula to be a great game in its own right.

Dark Souls Remastered is a game only for the patient, and the first of a trio of titles that demands absolute perfection and precision at times. While you're spending most of your time exploring, it can certainly feel as though every moment not spent fighting is in preparation for the next battle. Much of the extreme difficulty in Dark Souls comes from the visceral and satisfying combat between you and the cavalcade of strange creatures and a variety of enemies who want your head on a platter.

While the game looks somewhat slow to an outside observer, anyone who has played can tell you exactly how nerve-wracking it is to circle a foe waiting for the perfect moment to strike. Mix that methodical combat with some insane bosses, and you've got a game that's much more action-packed than you'd think at first glance.

Demon's Souls from Bluepoint Games and SIE Japan Studio first debuted as a PS5 launch title for eager PS5 owners, but before then, it was a PlayStation 3 title that invited Soulslike fans into a world of obfuscation and bewilderment. Not much has changed since then, but this reworked version sure does look a lot better -- and many might say it plays better, too. Those who enter Demon's Souls become an adventurer who enters the fog with the intent of defeating the Old One once more to bring peace to the kingdom.

Demon's Souls is rife with frustrating battles and fulfilling moments that put you on top of the world when you emerge victoriously. It also incorporates multiplayer elements into its single-player game in an ingenious way. It's nothing like any other game you'll play on PS5, but it's a worthy remake of a game that changed the way we'd see dark RPGs for years to come.

Known for its punishing difficulty, Nioh 2 is a satisfying blend of sword fighting and spiritual power as you make your way through the game collecting special "yokai" abilities and building up your character (who was once a yokai himself.) The game itself acts as a prequel to the original game, and it's an exciting adventure that will make sure it tickles that "Ninja Gaiden hard" itch Team Ninja has always boasted.

The original Dark Souls series may have concluded, but From Software has pushed beyond it with Sekiro: Shadows Die Twice. Sekiro still carries the brutal difficulty that made Dark Souls such a hit (and a meme), but it changes things up with an emphasis on attacking and the use of abilities. Sekiro's world also feels a lot more filled out, and its death and resurrection mechanics tie right into the plot. There's also so much to do that it feels like you've stepped into a world nearly as large as Elden Ring's. Okay, not quite, but you can catch our drift. And as an added bonus, some even say Sekiro is more difficult than the other Soulslikes on the market. That'll be up to you to decide.

Dark Souls II may have been a follow-up to the game-changer that Dark Souls was, but it wasn't initially as well-received. Things have changed, and players have, well, matured. It's chock full of bizarre, spooky areas to explore and all the dark fantasy elements that made Dark Souls (and later, Dark Souls Remastered) so arresting, with a series of punishing bosses like the "Fume Knight" to spank you six ways from Sunday. It concentrates on some rather unique features that some die-hards weren't crazy about, but a tried-and-true part of the Soulslike game universe is always going to come highly recommended. You'll get to become acquainted with power stances and bonfire replays soon enough.

What a surprise that all three core entries in the Dark Souls series may be included on this list! How curious. Just kidding. Dark Souls III is actually the best of the trilogy by far, in terms of current standards. Not only does it feature the same difficult encounters you come across in the previous two titles, but it's more approachable for beginners, too. So you'll still be stuck floundering at the beginning of the game if you're a newbie trying to find your footing, but the game saves some of its harder battles for later on for a little bit of hope. Just about every aspect of this entry improves on the other two Dark Souls titles in every way, so it's well worth jumping into, no matter where you lie on the Soulslike spectrum.

We heard you liked anime with your Soulslikes. While it's easy to write off Code Vein for simply being "Dark Souls but anime", it retains many of the characteristics that Soulslikes do, with some fun changes to the formula. And don't let the anime-inspired graphics fool you. This is a deep (and sometimes very tough) game. You're encouraged to swap out classes, try plenty of different weapons and unique playstyles, and even play with friends to see everything Code Vein has to offer. But then you can stroll right into its colorful world and be stomped just the same, like the rest of the Soulslike games. So, you know, it's cut from the same cloth.

Salt and Sanctuary may "feel" different from typical Soulslike games in that it sheds a bit of its action-oriented persona and adopts a 2D perspective. But that doesn't mean it's a Soulslike you should pass up. It feels like a platformer that's got it out for you, all the while dumping new customization options, an in-depth skill tree, and additional mechanics that evolve over time into your lap. And on top of it all, its punishing difficulty makes for some ugly showdowns. All in all, that means it should definitely attract Elden Ring fans.

Yes, we're aware the Hollow Knight shares many similarities with "Metroidvania" games. But hear us out. You play as a white insect-like knight tasked with investigating the downfall of civilization by a blight called "the Infection." As the Knight continues to explore, he learns more about the kingdom and what happened to bring it to its knees -- and meets enemies too ready to kick his teeth in along the way.

But that's fine because the Knight can learn new mid-air jumps, nail art combat abilities, dashes, and even wall adhesion to get from point A to point B. Mapping out a new enemy or location is part of the fun. The Knight and his various insect-like powers make traversing these areas fun, but the challenging nature of the world and the characters within it are too Soulslike to ignore.