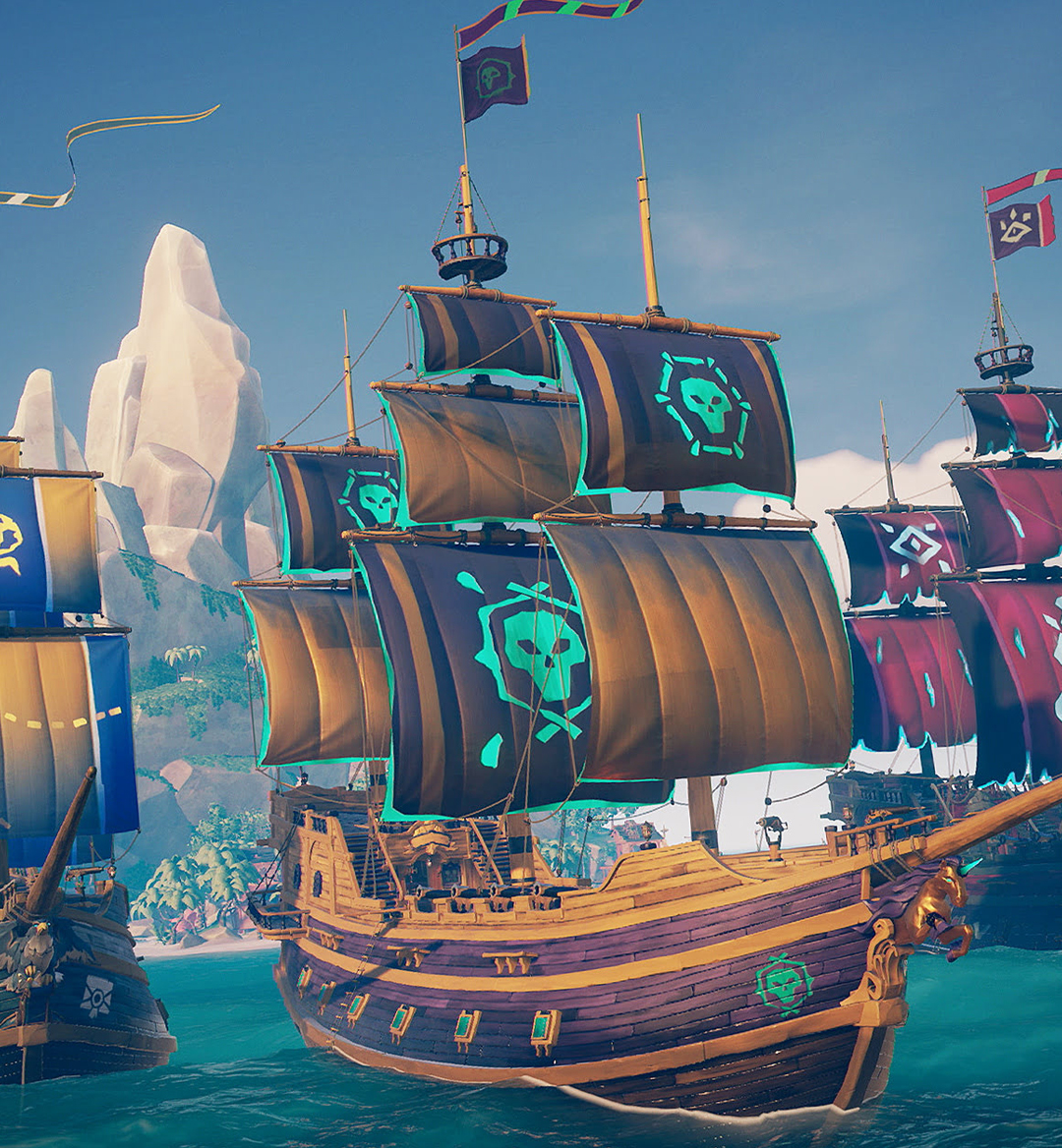 Sea of Thieves entered early access at a time when online PVP was experiencing a bit of a renaissance thanks to games like Fortnite. But instead of dropping players on a map, Sea of Thieves put players on the high seas, giving them command of entire vessels. Throughout its beta Sea of Thieves garnered a huge player base thanks to many at the time believing it was one of the few games that gave players the chance to helm their own vessels. Of course, there are a number of games that give you a similar experience. The following are the 14 games most like Sea of Thieves.

One of the big draws behind Sea of Thieves is its comedic undertone. If that is one of the reasons behind your love of Sea of Thieves, then Monkey Island is right up your alley. The game, released in 2009 by Lucas Arts, tells a swashbuckling story as players explore the titular Monkey Island.

This one might be a bit controversial. Elite Dangerous doesn’t take place on the water, but it doesn’t necessarily have to capture the essence of Sea of Thieves. Is it about piracy? It can be if you like. In fact, piracy is a major component of the game. So is PVP combat, managing your personal vessel, and a host of other factors shared with Sea of Thieves. In fact, the similarities between the two games underscore the similarities between piracy of the past and piracy of the distant future.

Beyond Blue is another game that pays homage to the Ocean. But unlike Subnautica that has players exploring the depths of an alien world, Beyond Blue has players explore the deeps of our own planet. Released by Eline Media last year, Beyond Blue didn’t cultivate a large player base despite being critically acclaimed. Exploration is the name of the game. The playing area is enormous and teeming with life, including sharks, though less aggressive than the variety seen in Sea of Thieves.

Windbound is a game that pushes storytelling in video games. Released in 2020 by 5 Lives Studios, Windbound is a game that, through its narrative, manages to mythologize the Ocean. Players take control of a marooned seasteading in an adventure that seamlessly combines the best of Sea of Thieves and Breath of the Wild. Windbound is as thrilling on the land as it is in the Ocean and is definitely worth checking out if you feel Sea of Thieves is lacking in story.

Few games can speak to the wonder, mystery, and danger of the ocean in a way Subnautica can. Released in 2018 by the aptly named Unknown Worlds Entertainment, Subnautica hit markets at the tail end of the survival game craze, sparked by Minecraft. Subnautica, however, is far from a Minecraft clone. Subnautica fleshes out an alien world and does so in a believable manner.

A classic game from the mind of Sid Meier. This game was released in 1987 and was one of the first to feature realistic pirate action. Of course, this being a Sid Meier game, strategy is a major gameplay component. Unlike other pirate games, in which victory goes to whoever can load up cannon’s and accurately shoot them, in Pirates! it's all about outmaneuvering your opponents to get the upper hand. While the game hasn’t exactly aged well, it’s still worth a look.

To say this game has generated its share of hype would be an understatement. Scheduled to be released sometime in 2021, the developers at Ubisoft could have a significant hit on their hands if they play their cards right.

Trailers for this hotly anticipated title show epic ship-to-ship combats hull, you can see every minute detail. Based on what has been showcased, battles could rival the scale of those scenes in Pirates of the Caribbean.

When players learned that Assassin’s Creed would be a series that theoretically could take place anywhere, I knew I would eventually be playing a Japanese-focused game and one that took place on the high seas. While the developers at Ubisoft have stubbornly denied players of the former, the latter came to pass in 2013.

While other Assassin's Creed games have featured boat battles, they haven’t featured the kind of boat battles that take place during the height of piracy. Everything from loading and firing the cannons to boarding and commandeering ships is a feature in this game.

An unexpected hit, Raft is a game that takes several chapters out of Sea of Thieves' book. Aside from taking place on the open water, the 2018 game released by Redbeet Interactive, is as comedy-oriented as Sea of Thieves. Instead of pirates, however, you play like normal people stranded on a small piece of debris in the middle of nowhere. It’s up to the player to literally fish for resources to slowly but surely build up their raft into a seasteading fortress. The sense of accomplishment one gets from building up to a viable community is gratifying which is probably why so many payers have become addicted to this cult hit.

Due out for an Aug. 31 release by Amazon Games, New World combines piracy with a heavy dollop of Tolkien-esque fantasy. Visually, New World is shaping up to be one of the most stunning on this list. Trailers for the game places the character in a distant land teeming with magical creatures. How the final product will turn out is anyone’s guess but if what we’ve already seen is any indication, this title is worth checking out.

If Sea of Thieves’ whimsy isn’t to your taste then give Naval Action a try. Released in 2019 by Game-Labs, Naval Action is part of a family of games that tries to blend realism, video games, and warfare. With Naval Action, one can recreate historic naval battles, like the one-off Beaufort North Carolina, or the battle that leads to Black Beard’s ultimate downfall. While the gameplay isn’t as fluid as Sea of Thieves, it is comprehensive. While other naval warfare games skip corners for the sake of gameplay, Naval Action players have to consider many of the same factors that were present at the height of piracy. This is the game for players looking for a real challenge.

Perhaps the most popular title on this list, Legend of Zelda Windwaker was, at the time of its 2002 release, was one of the largest Legend of Zelda titles. That’s because the game's core concept was sailing on the open season with your sentient boat.

The game not only made use of similar cell-shading visuals seen in Sea of Thieves, but it was also perhaps the first to popularize the visual style. While the game was underappreciated when it was released, in the years that have passed, it has gone on to be considered one of the best Legend of Zelda titles that isn’t Breath of the Wild.

Although released last year in 2020, developers at Mastfire Studios kept this game in Alpha and Beta for a number of years. It’s for this reason why Blackwake, though officials released after Sea of Thieves, can be considered its predecessor.

In fact, Blackwake was a sort of proof of concept for many pirate-themed games that has players duke it out on the open seas. While the graphics may not be impressive, the mechanics are, in many ways, tighter than Sea of Thieves, successfully sniping an enemy pirate with a cannon feels more like a matter of skill than random chance. It’s the precision of the gameplay that has players coming back.

Atlas is best described as Sea of Thieves’ slightly more serious twin brother. Released in 2018 by Grapeshot Games, it isn’t quite clear why Sea of Thieves rose to popularity while this title fell to relative obscurity. Just about everything you can do in Sea of Thieves, you can do in this game with the added benefit of more attention to detail. The only significant difference between Atlas and Sea of Thieves is the former's lack of a distinct art style, instead opting for more realistic graphics. For those looking for a pirate simulator that takes things a bit more seriously, Atlas is the game you have been looking for.