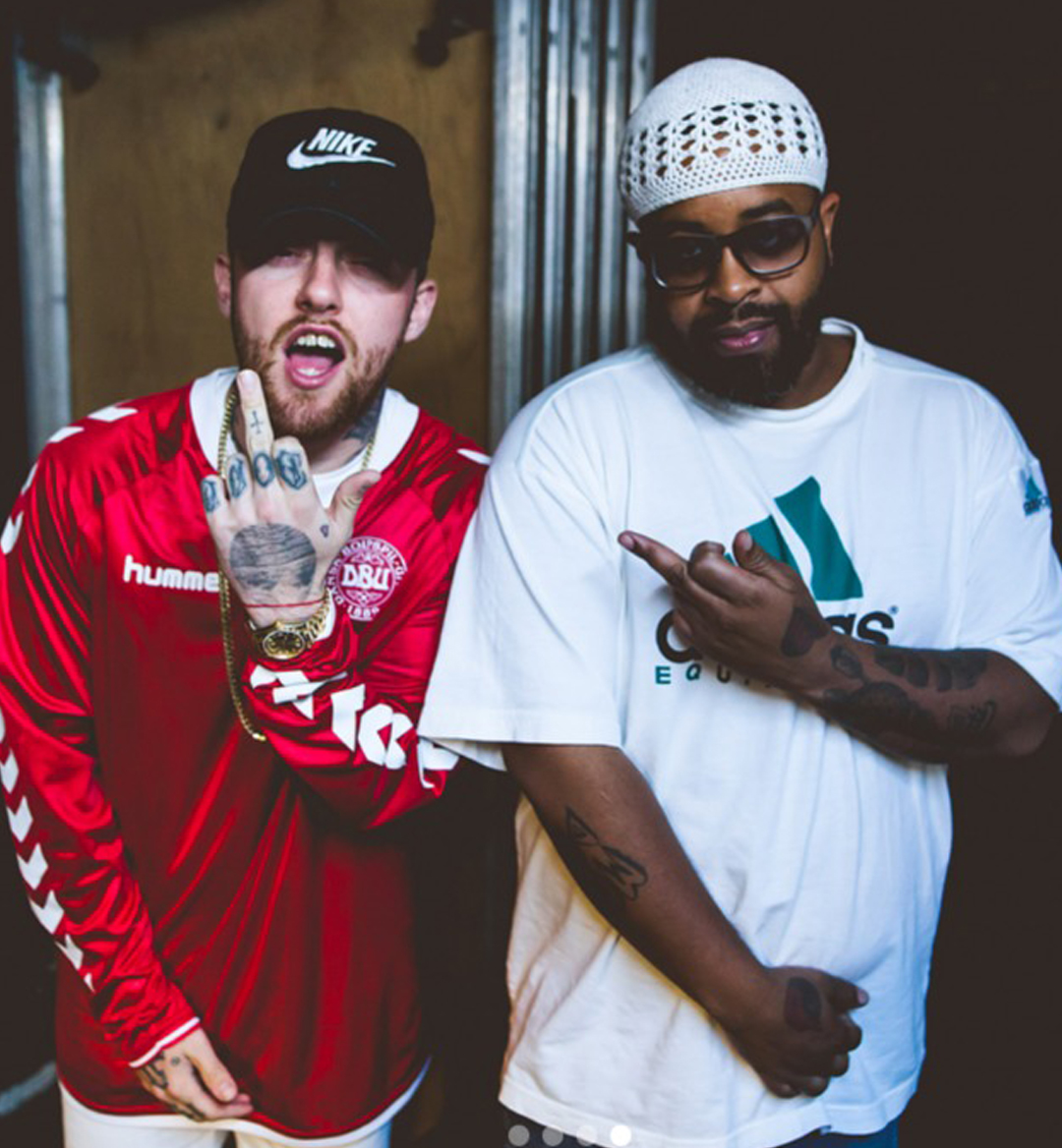 “Nobody can mix Mac Miller’s music like me because I was with him for ten years. I was in the studio for a lot of his music like Blue Slide Park, Watching Movies with the Sound Off, Faces and everything after that,” Clockwork DJ, Mac Miller’s longtime DJ, told ONE37pm.

Mac Miller’s impact on the world is as incontrovertible as his death, and his music is a constant reminder of the immutability of both. A generation of millennials can map out their growth into adulthood with Miller’s songs as landmarks. On Saturday, Clockwork DJ, Mac’s DJ for the last ten years of his life, plans to put on a four-hour set full of rare and popular Mac Miller songs at Brooklyn Bowl in honor of what would’ve been his 28th birthday on Jan. 19.

The honesty of Mac’s music that endeared him to millions is the same that could make listening to his music heartbreaking. Three years before he died (from an accidental drug overdose) he rapped on “Perfect Circle/God Speed,” “They don’t want me to O.D. and have to talk to my mother and tell her they could’ve done more to help me, and she’d be crying saying she’d do anything to have me back.” Clockwork wants to assure those who attend the Mac Miller tribute party that honoring him means honoring all of the emotions he elicited.

“You don’t feel weird or shy that you’re shedding a tear because the person right next to you is doing the same. Even the DJ is crying,” Clockwork said. “People say, ‘There’s no crying in the club.’ You can cry in the club at this party.”

Before he spreads Mac’s spirit throughout Brooklyn Bowl, Clockwork spoke with ONE37pm about the last conversation he had with Mac Miller before his death, why this party is necessary and club memories with Mac.

ONE37pm: How long have you been preparing for this event?

Clockwork DJ: I only did this event this year because of the fans. It’s been an outpour of support and people wanting this event to be an annual event. Truth be told, I wasn’t going to do it this year, but so many fans have hit me about it. Some fans came to the one I did in Pittsburgh. Some fans came to the one I did last year in Brooklyn. It was so much love in the room at those events that they came to me wanting me to do it again. So I’m really doing it for them. I’m doing it for myself, as well, because it’s kind of therapeutic to always DJ, hear his records and think about the times those records were made and the moments. It’s good for me to not shy away from it and act like it never happened. It’s a needed thing because I’ve never been anywhere where somebody played more than three Mac Miller songs in the club. I’m doing a four-hour set, which shows how extensive his catalog is.

What was the first one of these events like following his untimely death in September 2018?

Clockwork DJ: The first one I did was last year in Brooklyn and it was amazing. I tried to stream it on YouTube, but the copyright stuff was popping up with every song I played, so they eventually blocked the stream. I want to make it an annual thing like Yams Day. Yams Day is a day where all the homies and people who knew Yams come out. This is only my second year doing it, so we’re still very fresh. I want it to be an annual memorial. As long as I’m on this Earth, people will never forget about Mac Miller. 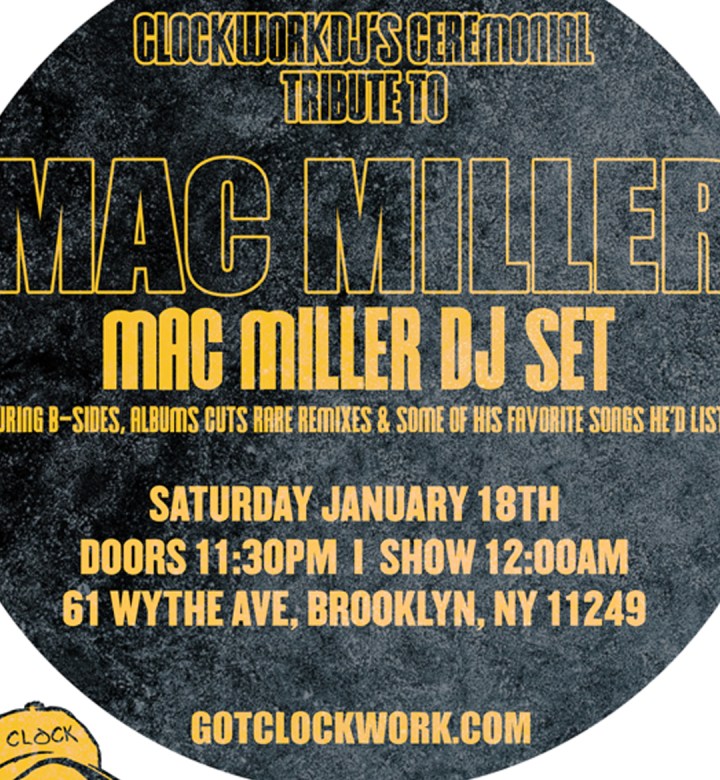 This DJ set will be four hours long. How did you come up with the set? Are you going to play any unreleased songs?

Clockwork DJ: The unreleased songs cause too much ruffling of the feathers, so I want to stay away from that. I’ve done it in the past and ruffled some feathers, so I don’t want to do that again. Plus, his new album [Circles] is coming out on the 17th so fans will get a whole new album of new music to eat up. I’ll definitely be playing those records. The whole idea just came about from me going through my library and seeing how many records he had. His catalog was so extensive. What artist now could you do a four-hour set with their catalog? Another reason I came up with the four-hour set idea is how a lot of his fans love the B-sides and the old records. They love hearing the songs he likes, so another part of the party will be me playing songs from Prince, 50 Cent, The Beatles and Sean Paul because those were some of his favorite artists. It’s me letting his spirit live in Brooklyn for the night.

To that point, Mac has a lot of somber and low tempo songs that usually wouldn’t do well in clubs. What sort of vibe are you trying to have at this party?

Clockwork DJ: I want it to be a melting pot of vibes. I’m definitely going to play the bangers like “Lucky Ass Bitch,” “Dang,” “O.K.” and “Gees.” I’m also going to play “2009,” and we’re going to cry a little bit. Last year, I played “2009” at the party and there were fans crying in the crowd. But it was a good cry because you’re in there with people who feel the same way. You don’t feel weird or shy that you’re shedding a tear because the person right next to you is doing the same. Even the DJ is crying. If you know his music, you know he went through a lot, and I want to keep it real and let people into his world. There are some people who may come to this party that never heard these Mac Miller songs because they’re album cuts or on old mixtapes. I want to make sure I cover all the bases of who he is as an artist. People say, “There’s no crying in the club.” You can cry in the club at this party (laughs).

I don’t want to bring the mood down, but do you remember the last conversation you had with him before he passed?

Clockwork DJ: Yeah. The last conversations were us talking about us linking up when he came to New York because I live in New York. But he was running around doing press and promo for the Swimming album and we didn’t get to link up. It’s crazy I’m telling you this because I’ve never really told anybody. I hadn’t seen him for months [before he passed]. We had a few shows earlier that year in South America at Lollapalooza [in March 2018]. That was the last time I saw him physically. We talked, FaceTime’d and I was supposed to see him in New York. He left New York, went back to LA and that’s when everything happened. The only thing I kind of regret is not being able to see him physically. That fucked with me for a while, but there’s nothing you can do. You can only be thankful for the times y’all did spend together. My last moments with him were in South America, and when we were there, I brought my own video camera. So I have a bunch of footage of him and Anderson Paak rapping Cam’ron’s “Oh Boy.” I got him and Mac DeMarco backstage. I got all of this raw, unedited footage that I’ll put together to show on the screen at the party. That’s for when we were in Brazil, Chile and a few other places.

What are some songs you’re going to play at the party that you think Mac wished would’ve been more popular?

Clockwork DJ: He loved “Stay” and “We” with CeeLo Green off of The Divine Feminine. The whole Divine Feminine was his shit. The record “The Question” with him and Lil Wayne from Macadelic. He also loved “Fight the Feeling” with Kendrick from Macadelic. That was back when Kendrick was starting to come out, so people weren’t really on the wave yet. “Small Worlds” from Swimming was also a favorite of his. It’s a shame he didn’t get to live to see the trajectory of that album.

You said you rarely heard more than three songs from Mac Miller played in a club. Do you have any memories of you two in the club when he was alive?

Clockwork DJ: Yeah! He would hop on my DJ sets. When he would come to my afterparties, he would hop on the turntables and he knew how to work Serato. I showed him how to drag the records from left to right. He knew about equipment and was one of those people who just knew how to use everything. I just had to show him a few technical things on when to drop the song and things like that. He would play 50 Cent “In Da Club.” He would play Shaggy’s “It Wasn’t Me.” I was going through my Instagram the other day and there’s a clip of me filming him while he’s deejaying. It’s him playing “In Da Club,” and it’s the perfect image of who he was in the club. He didn’t go out that much, so a lot of times I would have to be like, “Bro, you have to come out.” Or, I’d try to put money in his pocket to give him that incentive to come out. I’d be like, “Bro, the club will pay you to come out.” He was never that type of clubgoing person. But every time he did come out, he would turn up.

Thank you for doing this for his legacy.

Clockwork DJ: It’s still such a sensitive thing for everyone—his family and friends. I want people to know when they’re reading this article that I’m doing this all out of love and doing it for the people. This is the only event I do once a year with Malcolm. This is completely for the fans, the people, myself and his family. I couldn’t listen to his music for a while after he passed. So, I know it’s hard for some people to hear his voice again, but I know time is the only thing that will heal. That’s why I want to continue to do this because five years down the line when people are more comfortable, the event could get legs. I want to get everyone involved. But it’s difficult to get everyone involved because people are still upset. I’ve been through a lot and I know music is my therapy.

The Mac Miller tribute party starts at 11:30 p.m. on Saturday, Jan. 18 at Brooklyn Bowl. Tickets can be purchased here.