Behind The Scenes with Gavin Meeler: Getting Unstuck Through Art 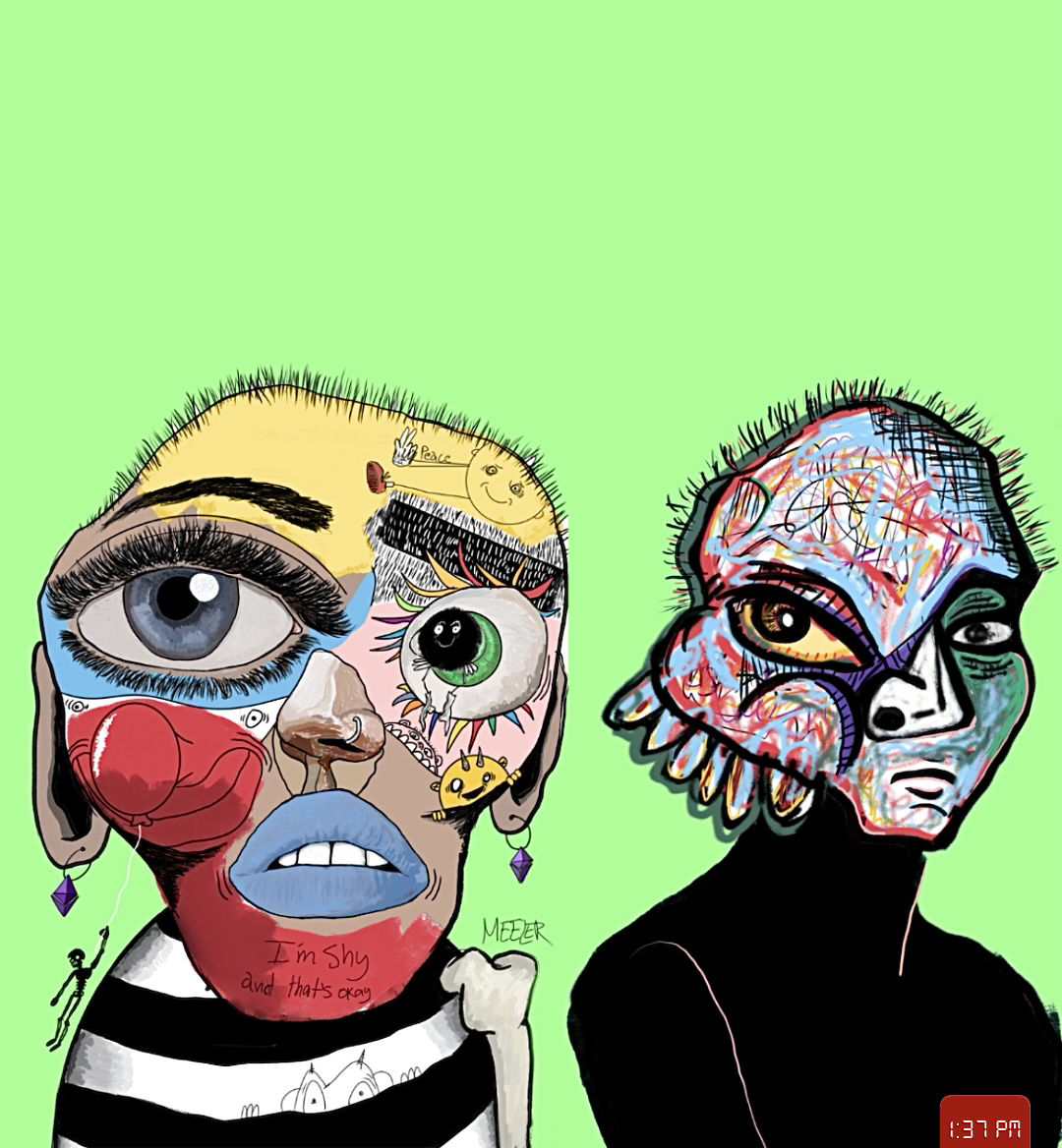 Adversity has historically led to art movements that define our culture and NFTs are no different.

What may be lost in the popularity and explosion of this new medium for delivering, selling, and buying art are the stories behind the artists.

These stories can be a powerful medium in the NFT space that helps artists emerge and find a fan base who connects to their work. With the expansion of NFTs, these stories will matter more and more for projects and artists who want to remain relevant in the long term.

It’s an opportunity for us all to support the artists we connect with on a deeper level.

We sat down with Gavin Meeler to share his story about getting unstuck from a seemingly impossible situation and changing his life through art.

It’s All About The Art

I always wanted to be an artist as a kid.

Gavin Meeler grew up outside of Atlanta, Georgia, and has been “all about art” since he was in elementary school, saying that if you saw pictures of him when he was younger, he’d likely be doing some kind of art. 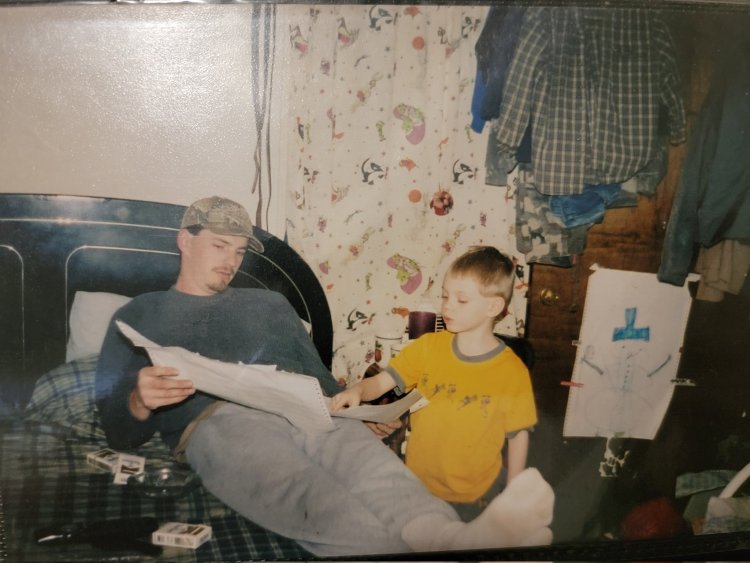 Throughout school, he struggled to stay focused and didn’t get good grades in traditional classes like math. He also described his home life as “challenging”.

Gavin took three art classes in one semester of high school because a teacher spotted his interest and pushed him to do more of it. The problem was that he didn’t enjoy doing her art, but rather wanted to focus on his own style.

He ended up meeting his teacher somewhere in the middle, but it was clear that he could stay focused, productive, and happy when living his passion through his particular art style.

He sold it to someone who was working at Subway, making minimum wage, but she loved the art so much she made it work. Meeler allowed her to make payments (and gave her the work on day 1) and ended up giving her a sketch for free.

Meeler said he’s been trying to stay in touch with her because she was his first fan before he found an opportunity in NFTs.

He also said that he stuck firmly to his price of $800 due to an indescribable feeling.

“I would never want to go to $40 for a big canvas and have always told myself that. I don’t know how to describe it. I just wanted to be in the business of actually selling the art.”

His hunger wasn’t to churn out hundreds of simple works to sell them at low prices. Instead, he takes pride in his work and doesn’t want to devalue it in the marketplace.

Despite a life-long passion for art and selling his first piece right out of high school, he had to overcome multiple hurdles to be able to produce art full-time.

Not Giving Up Despite All Odds

If you want to be a Gary Vee, go now and don’t work here anymore.

Throughout elementary and high school, Gavin got into flipping. He loved trading up — Pokémon cards, figurines, you name it, and that became his hobby.

Later on, the skill would prove useful for survival.

Meeler grew up in a difficult home without much access. He didn’t have a car and couldn’t walk to a job. He felt trapped after graduating high school.

He worked at Pizza hut (with his father giving him rides) but eventually quit and used all of his free time to learn about art.

He spent hours and hours actively studying art history on YouTube with the intention of grasping the mental state artists were in and their life stories.

Are you ready??? Tomorrow is the big day 👀😊 pic.twitter.com/VSzMKqbGNf

Despite a difficult and seemingly hopeless situation, Gavin used the time to meticulously work on his craft.

After some time, he moved in with his wife’s parents.

At that point, he didn’t even know how to drive because no one taught him how.

However, he continued to improvise on his situation and got deep into flipping items to help pay his bills. He and his wife would go to garage sales and thrift stores all day long, once selling up to 20 items every 2 days.

He eventually learned how to drive and was able to purchase two cars (one for his wife and one for him), but had to deal with frequent breakdowns.

Gavin had to take on another job to help make ends meet, landing at a truck place, which he described as “abusive”.

He was hired to paint trucks (as a way to partly fulfill his passion) but was made to clean bathrooms, was yelled at unexpectedly and workers would undo his work only to cause him additional stress.

"I wanted to get closer to my dream of painting. "

He thought it would be a step closer to his dream, but when it was held back by his boss and co-workers, he put on Gary Vee’s podcasts day in and day out.

He couldn’t handle the negativity and said Gary’s podcast brought him positive vibes and inspiration, so Gavin used his lunch breaks to watch garage sales and art videos.

Eventually, his boss told him “If you want to be a Gary Vee, go now and don’t work here anymore.”

That’s when Gavin decided to leave.

Using Art to Get Unstuck from An Impossible Situation

I got into NFTs and got really confused. I didn’t know how to navigate it, but I knew I needed to get into NFTs as soon as I could because I felt something with it.

After leaving the job at the truck place, Gavin got back into flipping.

It took a lot of work and he realized that flipping helped pay the bills, but didn’t do anything beyond that. Without any savings, he and his wife would often go out for $3 meals at Burger King. Splitting a soda and getting $1 McNugget meals. It was all they could afford.

He tried to sell his art at galleries, but he wasn’t able to make sales and wasn’t sure where to go.

After looking up anything to do to make an extra $100 online, he saw something about NFTs. It was confusing at first. Gavin didn’t understand the multiple platforms and went deep on learning how an artist could put up their work for sale using NFTs on various platforms.

“I jumped into one of the platforms and I couldn’t afford to post with gas. I had to wait 6 months. At that point, a stimulus check came in and I wanted to use it for minting my art as NFTs.”

He had to wait 6 months before he could afford to list his first NFT but took the last of the money from his stimulus check to do so.

It wasn’t about the money, though.

Gavin said Fewocious is living his dream and after watching the interview with his wife and her parents, he was determined to figure out NFTs.

I got burned by accidentally burning an NFT and losing $400 in gas during the minting process. It felt fatal at the moment, you don’t find a $400 item at a yard sale.

Minting your work as an NFT artist costs money, and Gavin didn’t have much left to spend to share his work with the world on the blockchain.

However, he said he learns best by doing, and while almost losing the last of his dollars, he figured out how to get his work onto NFT trading platforms.

That’s when doors started to open.

Then, he got an e-mail that he would be featured on the home page of OpenSea and had to get at least 20 items in his collection for them to do so.

I'm so very grateful & honored that @garyvee just bought my piece. You don't know what this man means to me. He got me out of my depression & into such a better mind state. He did all of it through his amazing psyche he has and talks about. Go read his new book 12 & half. Thank u pic.twitter.com/uIQn1pJCb8

His first ever NFT collector eventually included him in an event with XCopy and Beeple, and Gary Vee ended up buying two of his pieces.

Gavin was on a vacation with his wife and her Aunt and Uncle when their buy orders started rolling in after OpenSea shared his project on their home page.

He was “freaking out” when sales hit $4,000 but had no idea how to get the money into the bank, or if it were even real. His family shared the same skepticism.

Ultimately, he made about $20,000 after being featured on the OpenSea home page and said that transferring the money “felt like such a big leap. Our hearts dropped when we pressed that send button because we didn’t know if it would go through.”

The bank was skeptical when he tried to transfer his Ether from Coinbase. It was a local bank and they had to involve the highest level of management to approve the transaction.

But once it did, Gavin’s life immediately improved. He used the money to pay off debts, and he said “it felt like the world to us” when he and his wife went out for a $30 meal that actually filled them up.

He also finally secured an apartment (this past month) where he now has a studio to continue to seriously work on his art. This wasn’t an easy process either. He had to pay 6 months of rent up-front in order to qualify due to the inconsistency of his income.

My pen would take over and I’d start creating but I’m becoming more thoughtful and intentional with my future projects.

After spending over 6 months in the NFT space, the direction for his art is becoming more clear.

His next endeavor is a concept he calls continuous paintings.

The idea behind it is to create a 1/1 painting, then have a phase 2 where he draws over the same canvas, evolving the art, and doing it in multiple phases.

In a lot of ways, it’s the combination of his previous two projects into one.

He’s able to step back and spend the time being thoughtful about where he wants to go next with his art.

Now that he has an apartment with a studio, and doesn’t have to spend hours flipping to make ends meet, Gavin looks forward to the future of his art and bringing more value to his collectors.