The Definitive Timeline of Early NFTs on Ethereum 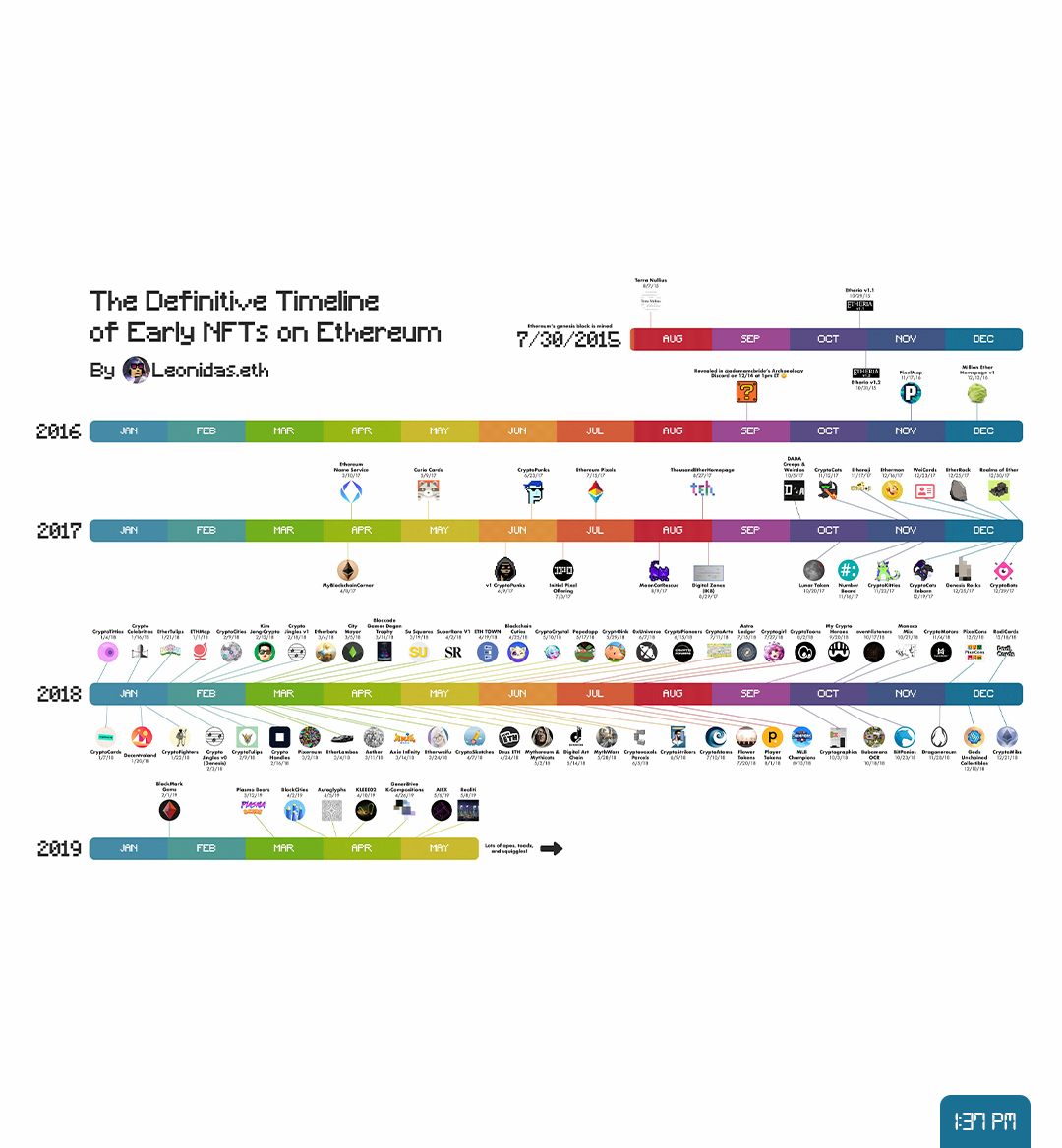 Thanks to Leonidas.eth, I was able to gather a list of some of the most significant NFTs created on the Etherum blockchain. This list doesn’t include every NFT on Leonidas’s timeline, however.

The Definitive Timeline of Early NFTs on Ethereum V2

Here are 25 of the earliest NFTs found on the Ethereum blockchain.

Terra Nullius is the first NFT on the Ethereum blockchain with a mint date of August 7, 2015. According to this Reddit post, it appears that this project was built to allow you to stake your ‘claim’ on the blockchain.

When you staked your claim you got to write a short message, meaning you can customize your NFT. This was a cool idea, especially considering how early this NFT project was.

Etheria v1.1, aka Blockplots, was minted on October 29, 2015. Blockplots was the first NFT on Ethereum with a transfer function. This NFT allowed you to own tiles on a map and had a limited supply of only 457 pieces. The transfer function was a huge step towards the NFTs that we know and love today.

Curio Cards is known best as the first NFT art project on the Ethereum blockchain. With an original mint date of May 9, 2017, Curio Cards consists of 30 unique art collectible cards from seven different artists. There’s a total supply of 29,296 cards, each with different levels of rarity and value which has been determined by the market.

The original CryptoPunks were minted on June 9, 2017. The first CryptoPunks contract had a marketplace bug that led to punks getting stolen. Currently, the OG Punks are still tradeable OTC but are banned on OpenSea.

It wasn’t until June 23, 2017, that Larva Labs created the uniquely generated 8-bit collectible characters that are known so well as the OG NFT project today. In fact, CryptoPunks was the project that started the 10k profile pic (pfp) trend and is currently available on Larva Labs with a floor price of over 65 ETH.

Recently, Larva Labs announced that they are working on an open-source, community-driven interface to the decentralized, zero-fee market for buying and selling Punks.

MoonCatResuce is another 8-bit NFT collectible NFT project that came out a couple of months after CryptoPunks on August 9, 2017. MoonCatRescue is the first cat NFT, and the first generative art NFT project found on Ethereum. MoonCatRescue has almost double the supply of NFTs compared to Punks, however, with a total supply of 25,440 pieces.

It didn’t take long for the next NFT cat-wave named CryptoCats. On November 12, 2017, CryptoCats was born as a collectible 8-bit cat on the Ethereum blockchain. The rediscovery of CryptoCats in March 2021 triggered the NFT archaeology movement. Compared to the previous projects, there is a limited number of only 625 CryptoCats NFTs available today.

The crypto cat trend continued with CryptoKitties. This NFT project was minted on November 23, 2017, and allowed you to collect and breed digital cats. CryptoKitties are a huge part of the Ethereum timeline considering these NFTs were the first ERC-721 tokens, however, they weren’t fully compliant.

CryptoKitties definitely have their place on the timeline, but with a total supply of 50,000 NFTs, they haven’t become extremely popular or valuable like CryptoPunks.

Ethermon was launched on December 16, 2017, as an early NFT play-to-earn game, allowing players to own, improve, use, and profit from their in-game digital assets. The current upgraded version of Ethermon was relaunched in 2019 by the game’s most dedicated players and an expanded team.

The game objective is to collect Ether Mons in order to participate in a growing range of p2e game modes. You can enjoy Ethermon via the 2D RPG on their site or a full-fledged 3D MMORPG in Decentraland’s metaverse.

EtherRock, which was minted on December 26, 2017, was one of the first crypto collectible NFTs on Ethereum. Only 100 original rocks were ever created and made available. Each new rock was created to become increasingly valuable. This game is completely constructed on the Ethereum blockchain, with a decentralized smart contract managing everything from buying and selling pebbles to their pricing and owners.

The only purpose these virtual rocks serve is to be bought and sold and give you a sense of pride as an owner of these limited rocks that are available in the game.

The Cryptocards collection was established on January 7, 2018. It is the first NFT collection with over 50 cards detailing the history of Bitcoin, with a total supply of 8,451. The first CryptoCards were issued as ERC-20 tokens, but the developers later created an ERC1155 wrapper to make them available on OpenSea.

On January 20, 2018, the popular metaverse world Decentraland was born. Decentraland is a 3-D virtual reality realm built on the Ethereum blockchain that is decentralized. You may engage in numerous activities, play games, purchase and develop lots of LAND, and earn cash known as MANA, which can be swapped for real-world currencies.

Etherbots is a game that went live on March 4, 2018, in which you acquire, create, trade, and combat completely customized robots. There are more than two million robots that could exist, and each one is immutably yours thanks to the blockchain.

The total number of robot crates ever sold is set at 3900. Etherbots is built by the same team that created the popular free-to-play trading card game Gods Unchained.

Etherlambos are digital high-end luxury cars that were minted on the blockchain on March 4, 2018. These digital vehicles can be accumulated, exchanged, and modified on the Ethereum blockchain.

Etherlambos offers a selection of limited-edition versions to pick from, or collectors can design their own upon request. Furthermore, you can tune your Etherlambo vehicle which alters both its performance and appearance. These digital vehicles are a known flex in the metaverse world today.

Axie Infinity was originally created on March 14, 2018, and is known as the first play-to-earn game that has gone viral. Axie Infinity is a combat pet universe that uses NFTs and blockchain technology to empower players in an innovative way.

On the surface, the game is about battling Axies and earning crypto, acquiring rare Axies with limited edition skins, and constructing a land-based kingdom where you may partner with others and battle for control of resource nodes.

Axie Infinity continues to lead the way as the most popular NFT and blockchain-based game with over 1.8 million active users logged into the platform as of August 2021.

If you are familiar with the popular meme Pepe, then you may have heard of PepeDapp, minted on May 17, 2018. PepeDaap is a set of NFT Pepe cards on Ethereum with a low supply of only 50 cards (supply varies by card). It’s important to note that PepeDapp was reminted and is a community-owned project that was airdropped to holders of the original PepeDapp collectible.

The reason this NFT project was reminted is that the original PepeDapp wasn’t written to be ERC721 or ERC1155 compliant. The new wrapper contract is ERC1155 compliant, meaning the NFTs are now tradeable on secondary marketplaces such as OpenSea and Rarible.

On June 5, 2018, another popular metaverse world named Cryptovoxels came to fruition. In the Cryptovoxels world, you can buy, own, and sell parcels. Moreover, as a parcel owner, you can choose to build on your parcel or make your parcel a sandbox parcel, which makes it free for anyone to build on.

CryptoStrikers (aka Wrapped Strikers) was brought to light in 2021 by entrepreneur Gary Vee as the first sports NFT on the Ethereum blockchain, originally minted on June 9, 2018. Holders of CryptoStrikers NFTs can buy, sell, and trade player cards like traditional collectibles. The cool thing about CryptoStrikers cards is the trust and transparency provided by the blockchain.

You can learn more about CryptoStrikers and Gilang Bogy, the artist behind the project, in this behind-the-scenes interview with Gilang.

CryptoArte is an early generative art project minted on July 11, 2018. Each CryptoArte painting matches its hash on-chain, ultimately creating the generative piece of art that you see displayed when you view the collection.

The creators of CryptoArte describe their project as an NFT art collection that tells the history of the Ethereum blockchain. There is a total supply of 9,895 NFTs in the CryptoArte collection.

MLB Champions is the first officially licensed MLB NFT blockchain-based sports game minted on August 13, 2018, which collectors could play using their own crypto figures. When MLB Champions was originally created, the goal was to have every game tied to a live MLB game in real-time and your figures earned stats based on how well they performed in the real-life MLB game.

However, the partnership between the MLB and the third-party developer was discontinued after failing to roll out new features on time and to align its NFT releases with the MLB calendar.

December 10, 2018, was the day that Gods Unchained unleashed their own NFT collectibles to give users complete ownership over their in-game items. As a player, you have the ability to collect rare cards, build your deck and sell cards to other players.

Plasma Bears was first minted on March 12, 2019, and is one of the most underrated NFT projects in my subjective opinion. Gary Vee was among the first to mention Plasma Bears and the fact that pieces of these collectible bears were created by famous artists such as XCOPY. In one of Gary’s recent podcast episodes, Gary even claims that his XCOPY Plasma Bears are his most prized possessions in his entire NFT collection.

The Plasma Bears were originally minted on the Loom network, which shut down unexpectedly, and once the game shut down and the sidechain bridge was closed, the opportunity for players to retrieve their bears ended, which ultimately created even more demand for these collectible bears.

I felt that ending this list of early NFT projects with a bang was the only way to go out. That’s why Autoglyphs is number 25. Autoglyphs was created on April 5, 2019, and is the very first on-chain generative art NFT on the Ethereum blockchain created by Larva Labs. There are only 512 Autoglyphs available with a current floor price of 195 ETH at the time of writing this.

Surely Autoglpyhs will hold strong as one of the most sought-after NFTs ever minted on the Ethereum blockchain, largely considering that the creators are also responsible for the creation of CryptoPunks, another highly-desirable NFT collectible.

This timeline originally created by Leonidas.eth builds on the research of many other NFT Archaeologists and would not be possible without their hard work and dedication to the NFT space.

Overall, it’s tough to say what the future of NFTs on Ethereum holds, but we can assume that whatever it is, it will be exciting and full of surprises. There are plenty more innovative NFT projects and brands that are likely to emerge from the NFT space, and as this list of early NFTs shows, this is only the beginning. The future looks bright, will you be a part of NFT history?

STEPN: The Web3 Running App That Pays You to Exercise