From 'Dexter's Laboratory' to 'Ed, Edd, n Eddy,' These are the 25 Best Cartoon Network Shows, Ranked 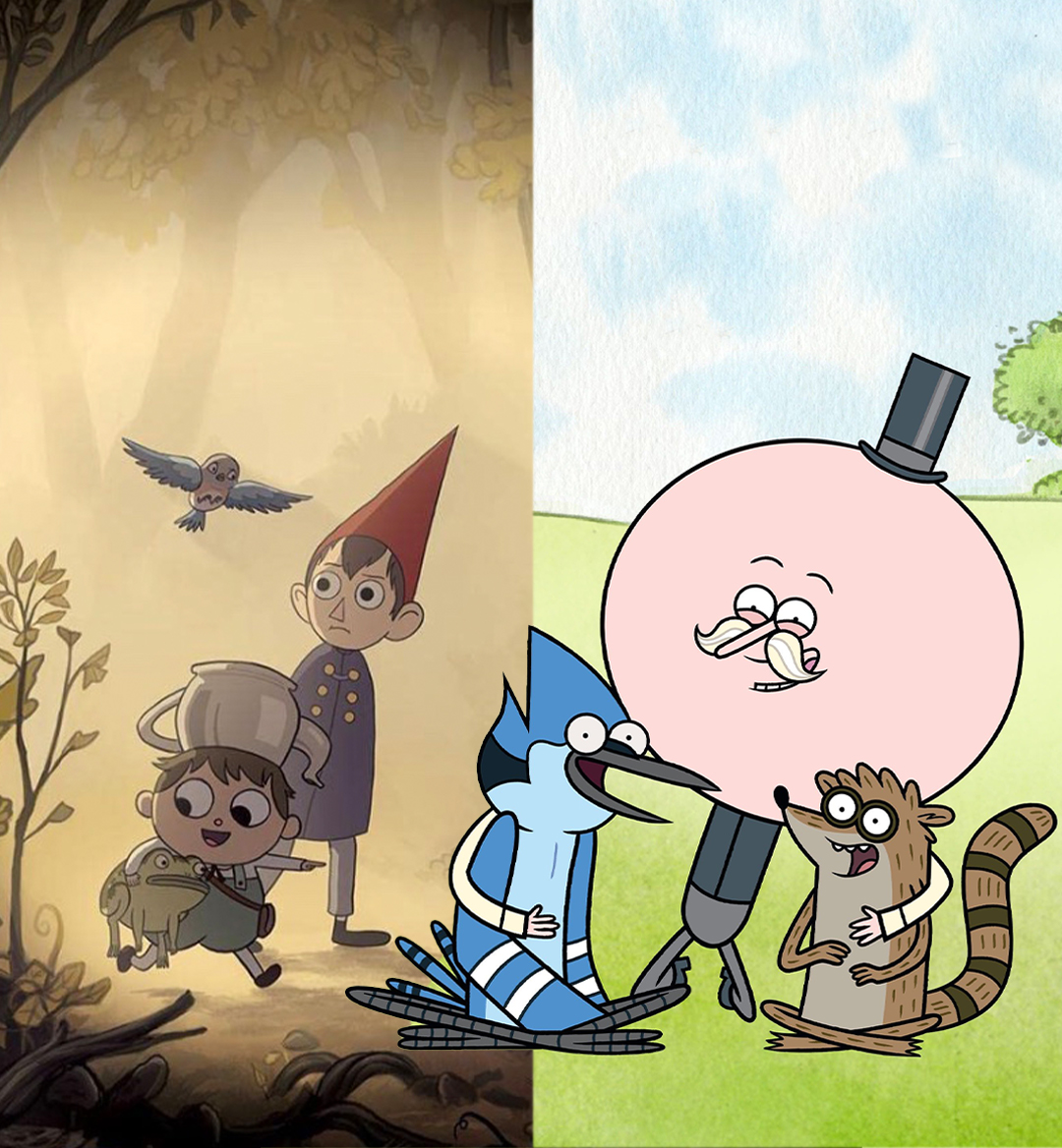 If that bright red, lanky, half-devil half-lobster abomination from The Powerpuff Girls still haunts you to this day, then you're in the right place. Actually, come to think of it, half of the things that lurk around in the back of my mind today all come from Cartoon Network.

Whereas Nickelodeon hit its largest stride in the golden age of the '90s, Cartoon Network practically had a death grip on the early-2000s with shows like Ed, Edd n Eddy, Dexter's Laboratory, and Courage the Cowardly Dog. Somehow I've brought myself to rank the 25 best Cartoon Network shows that we've ever seen, from the early days of the lesser-known Sheep in the Big City all the way to the more recent Over the Garden Wall.

What initially started off as Total Drama Island eventually became part of its larger-encompassing series, Total Drama, which has a number of different iterations under its umbrella. The entire series is meant to mock the genre of reality and competition shows with each season featuring a different sort of adventure.

10-year-old Ben Tennyson lives quite the double life as the watch that he wears around his wrist doubles as an alien-summoning device, more well-known as the Omnitrix. The thing is, the watch doesn't just summon aliens in the classical sense: it transforms Ben into a number of different aliens which he uses to fight off different villains who threaten both the planet and himself.

Though Totally Spies! originally saw its heyday when it first aired in 2001, the show was brought back for a reboot which is set to premiere in 2023. The original series is about Alex, Clover, and Sam, three teens who also happen to work as spies in their spare time.

Okay, I really pulled this show out of the depths of my brain to write about it. ¡Mucha Lucha! is an often-forgotten series that aired on Cartoon Network from 2002 to 2005. It's all about Rikochet, the Flea, and Buena Girl, three friends who compete in lucha libre wrestling in Luchaville, California, and make their way through school at the same time.

Okay, Sheep in the Big City is a major throwback from Cartoon Network, but there's a fair chance you'll recognize the sheep in question: Sheep. Yes, he's well-named. The series follows Sheep as he's tracked down by a military organization in an effort to bring him to the big city and use him to power its mighty ray gun, which specifically calls for a sheep in its blueprints.

Now, this one's throwing it waaaaaay back. Cow and Chicken revolves around the aptly-named Cow and Chicken, two animal siblings with human parents. You know, because that makes total sense. Most of the time, the two are facing off against Red Guy, their main enemy, though Cow and Chicken get themselves into all sorts of other trouble outside of that.

Although this one wasn't my favorite series, it's definitely one of the best Cartoon Network shows for its sheer OG status.

A spinoff of Cow and Chicken, I Am Weasel is actually about two different animals: a weasel and a baboon who are good buddies and enemies at the same time. Basically, I.R. Baboon is a little jealous of how universally beloved I.M. Weasel is, so the two end up sparring quite a bit throughout the series.

18. 'The Marvelous Misadventures of Flapjack'

A series that I was forced to watch because it was one of my brother's favorites, The Marvelous Misadventures of Flapjack stars the eponymous Flapjack, a boy who was raised by a whale named Bubbie, as he becomes friends with Captain K'nuckles, an old captain in Stormalong Harbor. They go on a series of different adventures both on and off the water as Stormalong Harbor is a city right on the water, comprised of various docks and piers.

Now, Chowder might not have been my favorite show on the planet, but because it was (again) one of my brother's favorites, I was forced to watch it and—eventually—at least appreciate the art style behind it. Basically, the series is about the eponymous Chowder, a young, aspiring chef who works with Chef Mung Daal at his catering shop.

The only good character on this show was Truffles. There, I said it.

Okay, this series might have a bad name and premise, but throw all of that out the window because My Gym Partner's a Monkey was actually a pretty solid addition to Cartoon Network when it first aired in 2005. Adam Lyon becomes friends with Jake, a spider monkey, after he's accidentally sent to a middle school for animals because of a spelling error in his name.

15. 'The Amazing World of Gumball'

A show that ran for almost 10 years, The Amazing World of Gumball tracks—you guessed it—Gumball Watterson, a cat, along with Darwin, his goldfish brother, as they navigate middle school in their home city of Elmore, California. While the series first takes place at Gumball's school and home, it eventually journeys into different realities, most notably in a realm known as, "The Void."

Camp Lazlo centers around Lazlo, a spider monkey, and his two friends, Clam (a rhinoceros) and Raj (an elephant), as they take on Camp Kidney and deal with the other campers and counselors. More so a boy-scout camp than a let-loose type of summer camp, Lazlo and his buddies explore old camp traditions and get themselves tangled up in some drama of their own.

Alright, this show isn't ranked the highest, but it's definitely iconic and well-deserving of being one of the best Cartoon Network shows that we've ever seen.

Sort of like a blonde-haired Elvis, Johnny Bravo was a pretty solid mainstay on Cartoon Network even years after the actual series came to an end. The entire premise of the show revolves around Johnny Bravo wanting to find a girlfriend, though it never really ends up working out for a variety of reasons, including the fact that he lives with his eccentric mother.

If you really think about it, the kids from Codename: Kids Next Door were basically the blueprint for most of the street styles that we see around today, because who doesn't want to walk around and fight crime in oversized cozy sweaters and sneakers? The series is about five kids—numbered one through five—who are all part of a secret underground organization with the mission to tackle crimes (usually committed by adults) against children.

Three best friends—who all go by some nickname derived from "Edward"—get into all different sorts of antics around their town, and though they all hold the same name, each one is more different than the next. Eddy is the de facto leader of the crew, Ed doesn't really know which way is up or down, and Eddy is the smartest in the gang.

This show might not be the first one that pops into your head in the realm of the best Cartoon Network shows, but it's definitely gained a well-deserved, massive following since it first aired.

The titular character in Samurai Jack doesn't actually have a name, though it almost doesn't matter because his skill level as a training samurai prince leaves each of his opponents at a loss for words. The series ended up becoming extremely successful for Cartoon Network with a total of eight Emmy Award wins since its creation in 2001.

Still extremely popular today, one of the largest draws to Cartoon Network happens to be the Regular Show. The series is about Mordecai and Rigby, two friends in their early twenties who work as park groundskeepers and deal with the daily annoyances of their boss and co-workers.

One of the more recent and beloved shows on Cartoon Network is Adventure Time, which only just ended in 2018 after a long, 10-season run. The series stars Finn and Jake (a human and a dog) who journey out on a number of different hilarious adventures across the Land of Ooo.

7. 'The Grim Adventures of Billy & Mandy'

Okay, now this is one of the best Cartoon Network shows of all time. You know, because nothing quite compares to a series about two kids who hang out with the Grim Reaper on a daily basis.

The Grim Adventures of Billy & Mandy follows the three main characters—Billy, Mandy, and Grim—as they do just that, though the "hanging out" aspect of it usually turns into something much different, as they often travel to the Underworld and encounter tons of different creatures and problems.

Before there were blockbuster DC and Marvel shows, there was Teen Titans. The series groups together the teen versions of different superheroes, including Robin, Starfire, Cyborg, Raven, and Beast Boy, who live out their lives in a massive T-shaped tower (Titans Tower) and attempt to fight off a wide range of villains who come after them.

The title of the show basically sums up the entire series: it's about an aspiring child scientist, Dexter, and the secret laboratory hidden behind a bookcase in his room. There, he runs a number of different experiments which almost always leads to something terrible happening. On top of that, Dexter also has to deal with his older sister, Dee Dee, who gets overly involved in his work.

The Powerpuff Girls—comprised of Blossom, Buttercup, and Bubbles—have to fight off quite a few reappearing villains throughout the course of the show, including the almighty Mojo Jojo and probably the most frightening character in all of Cartoon Network history, Him, which is an extremely tall, red lobster-like creature with legs as long as his torso.

A lesser-known tale in the realm of Cartoon Network, Over the Garden Wall is a 10-part series with each episode lasting only about 11 minutes. It follows the brother duo of Wirt and Greg who get lost in a forest and attempt to find their way home, though in each episode, they're thwarted by some sort of creature, place, or supernatural force.

Looking back at this series now, I don't know how Courage the Cowardly Dog was legally allowed to air on a kid's TV channel, but I'm more than glad that it did. This show was so screwed up that it actually gave me nightmares, as it featured a poor, scared, purple dog having to fend off a new, creepy character in each episode. Most of the encounters would also include his gullible and oblivious "parents," Muriel and Eustace Bagge.

Foster's Home For Imaginary Friends is an amalgamation of everything that is good and holy—the crown jewel of Cartoon Network. In the series, we're thrown into a towering mansion that houses the imaginary friends that children come up with in their heads and the scraggly staff that supports them, including a bunny named Mr. Herriman, Frankie (a human), and the icon that is Madame Foster, an older woman who created the home. The main residents include Bloo (along with his best friend, Mac), Wilt, Coco, and Eduardo, with the occasional sighting of the icon that is Duchess.