The 10 Best Fighting Anime That Bring the Hype 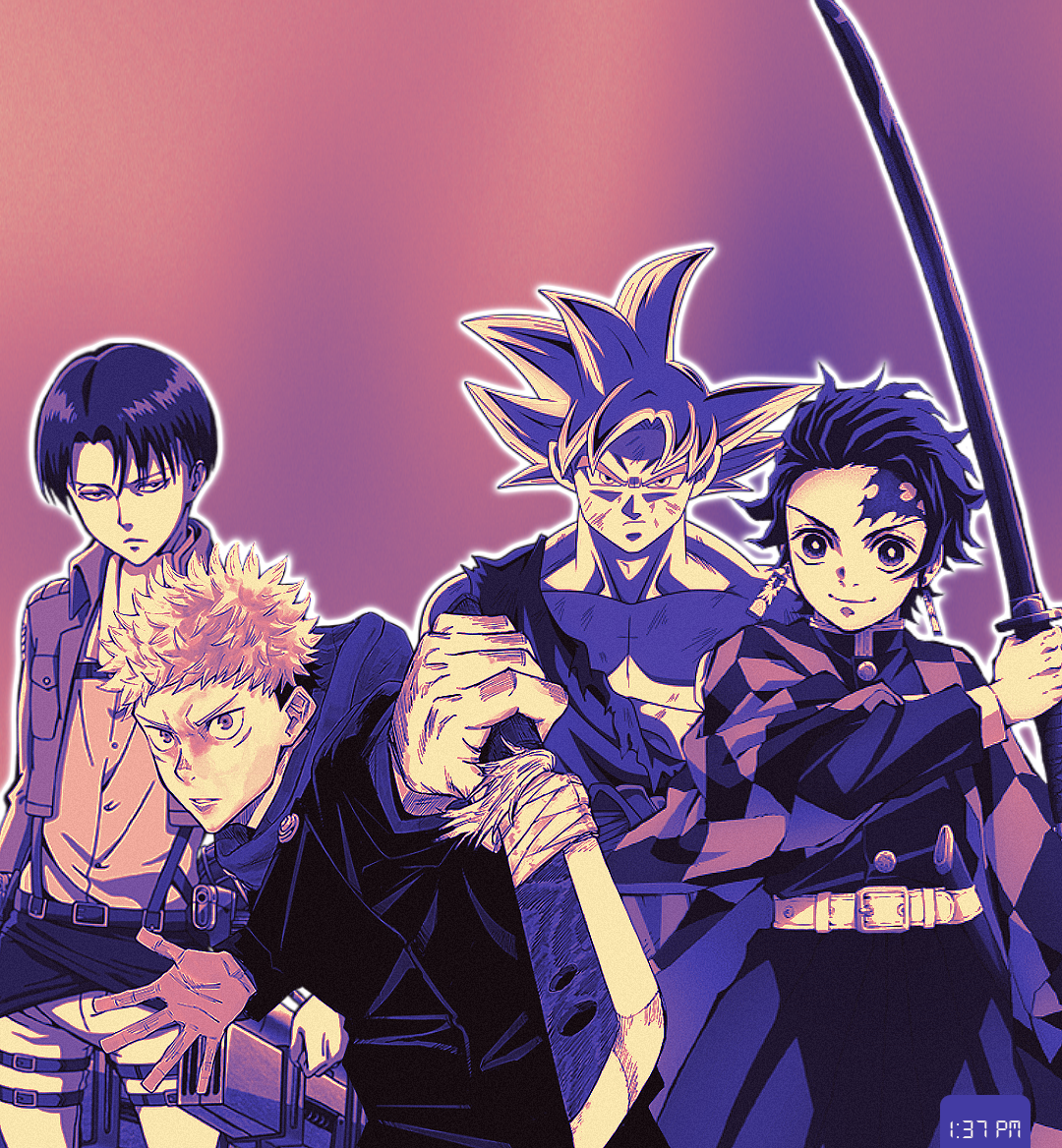 The anime genre is known for featuring some of the best stories and the best action scenes within the entertainment medium.

The fantastical nature of it all and its striking visuals make way for hyperkinetic clashes that can't be easily emulated on a live-action show. As animating technology continually advances, those aforementioned battles look all the cleaner and are filled with even more intense.

But the anime action greats of the past still hold weight as they still pack a punch. A great fight in an anime is exhilarating and always gets the blood pumping. As such, this list will focus on the fighting aspect of 10 of the very best anime, which means factors such as plot and characters aren't deciding factors here. So below is my list of the top 10 fighting anime that will have you hype enough to climb Mt. Everest and form a Spirit Ball with ease.

Disclaimer: Making a top-tier list is always controversial as everyone will have their own opinions and bias toward a particular pick. As such, I want to note that these are my picks for the top 10 fighting anime and I want them to serve as a backbone for initiating conversation.

If this list was about anime with the best stories, Attack on Titan would be closer to the top of it. However, in terms of action, it's the weakest of this bunch. Attack on Titan focuses on humanity's survival against giant cannibal creatures known as "Titans. "These Titans vary from being three feet tall to 200 feet tall. With humanity's back against the wall, a chosen few decided to fight back against these creatures with the assistance of omnidirectional mobility (ODM) gear.

This gear enables humanity to traverse the terrain at great speeds and with great agility, enabling them to maneuver around the battlefield with precision to strike at the Titan’s weak points. This high maneuverability leads to strong fight scenes that will get you excited about future combat encounters between the humans and Titans (the Titan vs. Titan battles are pretty dope, too!).

God of High School follows student Jin Mori and several others as they come to blows during an epic fighting tournament. With such a strong focus on combat, this anime has managed to elicit high expectations from its fanbase. While relatively short with only 13 episodes shown thus far, God of High School follows the motto of "quality over quantity." Those 13 episodes contain some amazing fights as its students engage in combat with powers borrowed from high entities, including demons and gods, for a chance to have any wish they desire granted.

Fate follows a similar plot format that's comparable to that of God of High School. Fate’s combat scenes are also centered around throwing hands (and feet!) during a deadly tournament. Whereas the God of High School relies on borrowed power, Fate relies on the combatants' usage of magic and the summoning of historical heroes to fight in what is called the "Fifth Holy Grail War." The animation studio behind Fate (Ufotable) utilizes the latest technology quite efficiently to produce some of the cleanest-looking animations, which regularly results in jaw-dropping cinematics.

Jujutsu Kaisen is one of the more recent anime featured on this list and it has quickly taken the world by storm. Although its mysterious plot and high drama are keys to that success, the show's biggest appeal is its action-packed fights. As you've probably realized already by its appearance on this list, Jujutsu Kaisen has some amazing fights. Best of all, the exhilarating fights are unhindered by needless dialogue.

More importantly, there's no filler content present to drag out the fights' length (which has sadly become the norm for numerous anime). The fights are action-packed and some of the outcomes are unpredictable, which does an admirable job of keeping everyone that watches them on the edge of their seat. With no two characters sharing the same fighting style, every character utilizes their signature "Cursed" technique to great effect.

One Punch Man is an anime about one superhero that exists in a world full of superheroes. As such, you can expect there to be a wealth of exciting action in tow as heroes and villains go to war. The hero Saitama, known as the titular One Punch Man, is capable of taking out an opponent with a single punch.

This central ability makes the main character insanely strong, which leads to some pretty weak action scenes as Saitama eliminates his foes with a single punch every time. Which isn't very exciting, obviously. Fortunately, all the other heroes and villains (especially Saitama’s “sidekick” who will not be named to avoid spoilers) get caught up in some insane fights that don't end with just one landed strike.

The Dragon Ball series is one of the OG animes. So it comes as no surprise that it's almost always viewed in a favorable light. I will highlight that I too am biased in that regard. Dragon Ball and Dragon Ball Z (and even Dragon Ball GT!) feature some truly unforgettable fight scenes. My main gripe is the fact that those fights dragged on way too long for my tastes. Going back to watch them can sometimes be a chore since the characters spend a full two to three episodes' worth of time “powering up.”

Fortunately, the remastered version of Dragon Ball Z eliminates a lot of that redundancy, which significantly improves the show's pacing. The series eventually expanded to Dragon Ball Super, which widened the franchise's universe to unimaginable levels and greatly enhanced the characters' fighting prowess.

Naruto is most likely the first anime that comes to mind when one hears the word “anime.” This makes sense since Naruto is a highly recognizable anime. Everyone that's followed it from beginning to end knows that its action scenes are the bread and butter of it all. Naruto is all about the trials and tribulations of a ninja named Naruto.

Naruto lives in a world where ninjas and their fighting techniques are common, which comes into play during epic struggles between the ninjas tied to various villages. These ninjas fight using Taijutsu (martial arts), Ninjutsu (techniques utilizing chakra), and Genjutsu (illusionary techniques utilizing chakra). The fights involve the ninja’s attempting to one-up each other with their techniques to achieve victory. Each ninja has its own skills and affinities - watching those powers in motion leads to some amazing fights as everyone attempts to outsmart and outlast each other with them.

"Bankai!" That word alone is enough to get the blood pumping for avid followers of this anime. Bleach follows the exploits of Ichigo as he fulfills his responsibilities as a "Substitute Soul Reaper (think something along the lines of the Grim Reaper). Through his many ordeals, he combats evil spirits and other dastardly entities.

Bleach is one of the greatest anime of all time and rightly so. The combat that breaks out during it is top-notch, plus it also plays host to the BEST music in all of anime. Similar to Jujutsu Kaisen's cursed techniques, the characters in Bleach use an array of unique weapons and abilities in the form of "Kido" and "Zanpakuto."

If Naruto isn't the first thing that comes to mind when you hear “anime,” then the name One Piece certainly will. One Piece is an iconic anime that's still going strong to this very day. Casual onlookers are quickly overwhelmed when they hear this anime has 1000+ episodes, but it's still worth delving into. The later episodes do struggle with pacing, but I digress. The fight scenes in One Piece are intense and epic, topped only by the next anime on this list.

Within the wide world of One Piece, some characters have eaten "Devil Fruits," which give them a special ability. The main character, for example, eats a devil fruit that gives him the power of rubberized limbs. It makes each body part of his extremely stretchable, which goes hand in hand with his imagination as it leads him to concoct some very forceful techniques.

Many of the other characters in One Piece have a specific ability that also utilizes their high creativity. Similar to Naruto, the fight scenes center around those types of characters using their abilities and wits to emerge triumphant over their rivals.

Demon Slayer is a fairly recent series that's taken the anime world by storm. It's grabbed a ton of attention thanks to its efficient utilization of modern animation techniques to produce some of the most striking images I've ever seen. And as some of you already know, those techniques bring the show's jaw-dropping fights to life.

In Demon Slayer, the fights are focused on demons with various abilities taking on the Demon Slayers who're tasked with taking them down. Those Demon Slayers employ the use of specific breathing forms that are perfectly in sync with their sword-wielding mastery. There has never been a dull fight in Demon Slayer - every fight that's broken out in this anime is definitely highlight-worthy.