The 20 Best FX Shows to Stream on Hulu Right Now 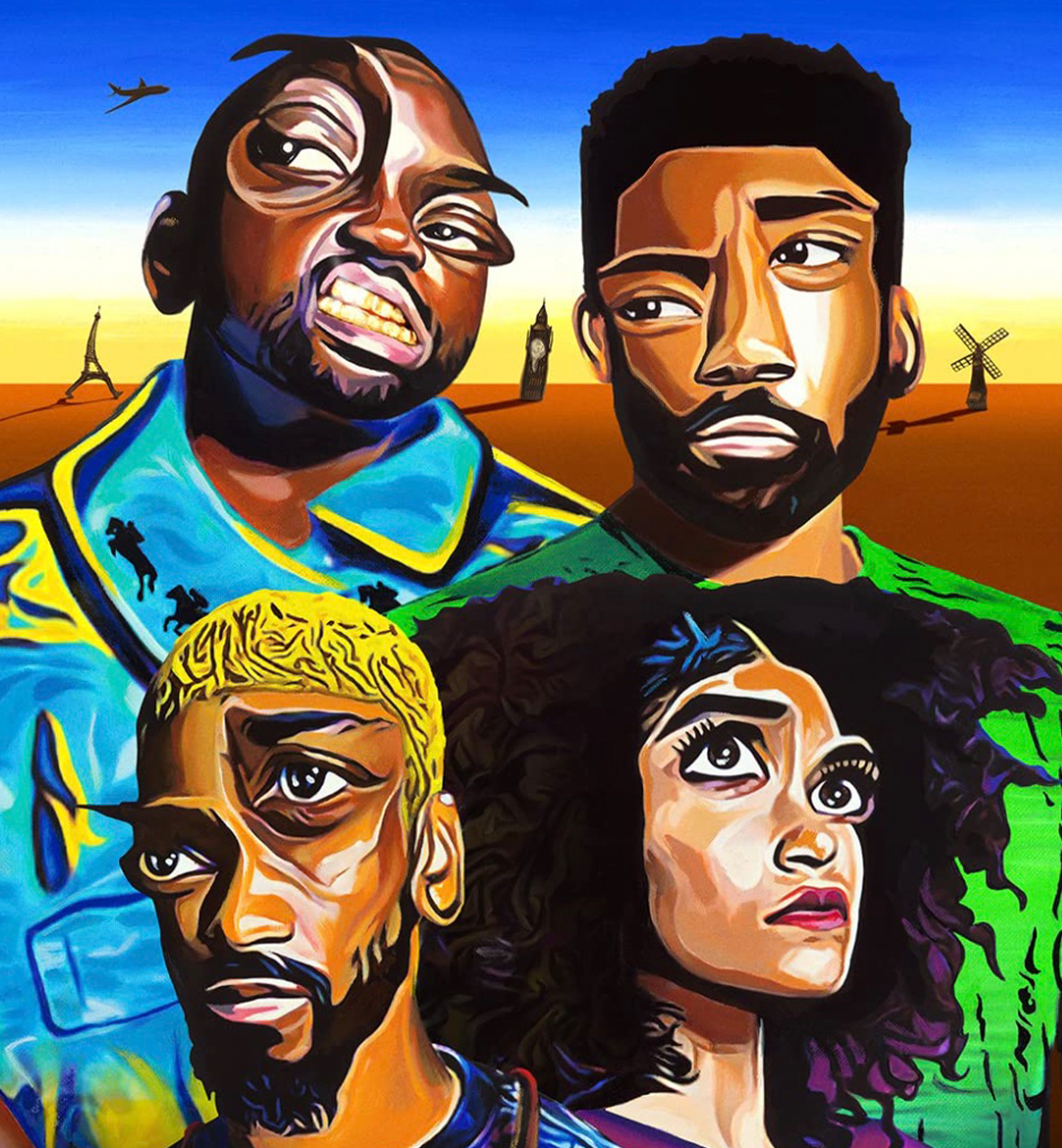 It turns out that FX cranks out a lot more than just Ryan Murphy shows on its network.

Given FX's partnership with Hulu to stream all of its original series, it's fairly easy to forget that the content actually comes directly from the network. Because FX is more concerned with the quality of its content as opposed to driving traffic to its own streaming site, it allows each series to shine as its own and stand out from the crowd at large, which is why its seen a slew of niche, successful shows come its way over the last few years, including American Horror Story, The Bear, and Reservation Dogs. These are just 20 of the best FX shows that we've seen come our way.

One of FX's more recent original series, Under the Banner of Heaven, stars Andrew Garfield in the centric role of Jeb Pyre, a detective and devout Mormon who's thrown onto a murder case involving a mother and daughter who were killed in their home. However, Pyre begins to question his faith when the murder looks more and more like it was connected to Mormonism. Garfield pulled off an exceptional performance as Pyre, earning himself a solid Emmy nomination for Best Lead Actor in a Drama Series along the way.

Based on the formation of the London punk band, the Sex Pistols, Pistol carries us all the way back to the 1970s when Steve Jones (Toby Wallace) is trying to scrounge up a solid crew to jam with. After wandering into a local punk clothing shop one day, he makes acquaintances with Chrissie Hynde (Sydney Chandler), Malcolm McLaren (Thomas Brodie-Sangster), and Vivienne Westwood (Talulah Riley), who take a special interest in the band and begin to help Jones form what will become one of the most iconic punk rock bands of all time.

We're thrown right into the Cold War with The Americans, a drama that tracks a pair of Soviet KGB spies who pretend to be a classic American couple in a Washington, D.C. suburb. The series both follows the spies portrayed by Keri Russell and Matthew Rhys as well as those working in the main FBI office, creating a dichotomy in opinions about the conflict from both angles.

What was first simply a series about two seemingly different people attempting to make their relationship work, You're the Worst became both a hilarious and telling look into the nuances of relationships and mental health. Not only does the series focus on these themes through both Jimmy (Chris Geere) and Gretchen (Aya Cash), but it also works in another plot with the couple's friends, Edgar (Desmin Borges) and Lindsey (Kether Donohue), who are going through some major troubles of their own.

Ryan Murphy's second original series was this OG gem, Nip/Tuck, which was ultimately responsible for creating the multi-year relationship he forged with FX, as it was later home to a number of his shows, including American Horror Story. Nip/Tuck is a genre-bending drama that follows the goings-on of a center for plastic surgery run by Dr. Sean McNamara (Dylan Walsh) and Dr. Christian Troy (Julian McMahon).

Who's in It: Jeremy Allen White, Ebon Moss-Bachrach, Ayo Edebiri

Another recent series from FX, The Bear—though not receiving a ton of hype beforehand—ultimately became a bit of an underground hit with its main character, Carmy (Jeremy Allen White), portraying an elite, successful chef who's forced to take over his late brother's Italian sandwich shop in Chicago, Illinois.

The restaurant is a major mess which Carmy attempts to make quick work of, though the original staff isn't as willing to make changes as he is, creating some major conflict between the two sides. Though it's a more recent show, The Bear has already been renewed for a second season and is shaping up to be one of the best FX shows we've seen in recent years.

A mockumentary-style series following a group of four vampires living in Staten Island, New York, What We Do in the Shadows is based on the film of the same name from 2014. The series is a hilarious look into how vampires would probably react to our present-day world, with it also featuring tons of guest appearances including that of Beanie Feldstein and Nick Kroll.

Who doesn't love to get into the depths and nuances of a rough-and-tumble motorcycle club? Sons of Anarchy went strong for seven whole seasons, tracking the Sons of Anarchy Motorcycle Club and its members as they smuggled guns and made different arms deals throughout California. On top of all the illicit activity, they're also forced to deal with various rival gangs and the police, which almost always throws a wrench into their plans.

Timothy Olyphant takes the lead in Justified as Raylan Givens, a U.S. Marshal in the eastern section of Kentucky who runs the area like it's practically the Old West, except it's not—it's the modern-day world. Because he upholds justice in his own, very specific way, Raylan always finds himself to be at the forefront of someone's radar, as he's often sought out by various criminals in the Appalachian mountains area.

Co-created by Taika Waititi and Sterlin Harjo, Reservation Dogs revolves around a group of Indigenous teens living out their lives in their Oklahoma community, though they spend the bulk of their time both fighting and committing various crimes in the area. While the series hasn't been nominated for any Emmys just yet, the show as a whole has received an extreme amount of acclaim, as it was even a part of the American Film Institute's list of the 10 best shows of 2021.

Based on the 1996 film of the same name, Fargo (2014) takes the same general premise and setting and creates a different investigation to follow along each season, complete with a new cast, as well. An anthology series in every way, the show has received high praise for its approach, earning itself eight Emmy nominations and two wins throughout its four-season run.

While there's an obvious difference between both sides, Schlafly's personal actions as a woman end up becoming more telling of who she would be if she decided to let go of her firm conservative beliefs. Though the series flew a bit under the radar, it still turned out to be one of the most well-thought-out, best FX shows we've ever seen.

A bit of an underground sleeper hit, Better Things takes both a hilarious and serious look into the life of Sam Fox (Pamela Adlon), an actress and single mother who's raising her three daughters in California. Not only is she dealing with a ton of stressors in her life already, but to pile onto that, her mother, Phyllis (Celia Imrie), lives right across the street, causing chaos in her own way.

Pose instantly became a groundbreaking series when it first aired in 2018, revealing the underground world that was the Ballroom culture of the 1980s and '90s in New York City. Though each character aims to strut their way to the top of the heap for their designated "house," there's a whole lot more going on than just dancing and serving in this series. Pose deals directly with the unjust treatment of LGBTQ+ people during this time period and additionally shines a close-up light on the impact of the AIDS epidemic.

A glimpse into the major rivalry between Joan Crawford and Bette Davis during their time filming What Ever Happened to Baby Jane? in the early 1960s, Jessica Lange and Susan Sarandon doubled down on their perfectly-campy portrayals for Ryan Murphy's original anthology series, Feud: Bette and Joan, with their performances earning them both Emmy nominations.

Feud is an anthology series, after all, but since its inaugural season aired in 2017, we have yet to see another installation. There was supposed to be a series about the feud between Prince Charles and Princess Diana, though that was ultimately scrapped; as of right now, the second season is currently subtitled, Capote's Women, and will revolve around Truman Capote's book about various socialities in his circle.

Ah, FX's original crown jewel, American Horror Story. This is where Ryan Murphy really cemented himself with the network, and while I'd argue that the first four seasons are the best, the series is still putting out new seasons after all these years.

Basically, every season features a somewhat new cast (though many actors have stayed for multiple seasons) and a new, frightening setting to go along with it, which has included a haunted house, a mental asylum, a witches' school, a carnival, and quite a few more. The show even received a more recent spinoff, titled American Horror Stories, which easily solidifies the overall series as one of the best FX shows of all time.

Borrowing the name right from its predecessor, Ryan Murphy came back with yet another anthology series, this time titled, American Crime Story, set up in much of the same way as American Horror Story. Thus far, we've been brought into the criminal investigations and stories behind the O.J. Simpson trial, Gianni Versace's assassination, and most recently, the impeachment of president Bill Clinton.

An iconic series that many people aren't even aware is from FX, It's Always Sunny in Philadelphia has created an insane cult following since its premiere back in 2005. The comedy series follows a group of friends who run a bar—Paddy's Pub—in Philadelphia, Pennsylvania, and get into various conflicts with each other for usually absurd reasons. For the sheer comedy alone as well as the show's unstoppable relevance, It's Always Sunny in Philadelphia is by far one of the best FX shows to date.

Even though the third season of Atlanta just wrapped up in May of 2022, we've got a bittersweet, fourth and final season with a premiere date of September 15, 2022. The series tracks Earn (Donald Glover) while he makes various changes in his life as a way to get ahead in the game and support his daughter, which includes reconnecting with his cousin, "Paper Boi" (Brian Tyree Henry), an upcoming rapper.

Glenn Close is both terrifying and inimitable lawyer, Patty Hewes, in this psychological thriller series that features a new investigation each season. Rose Byrne portrays an up-and-coming lawyer, Ellen Parsons, who joins Hewes' firm, though what she doesn't realize is that she's stepping foot in what will turn out to be a long, arduous, and (sometimes) murderous career.

One glimpse of Glenn Close as Patty Hewes is enough to solidify this series as one of the best FX shows to ever air.

Watch now on Hulu
Slide 1 of 3
Did you like this article?