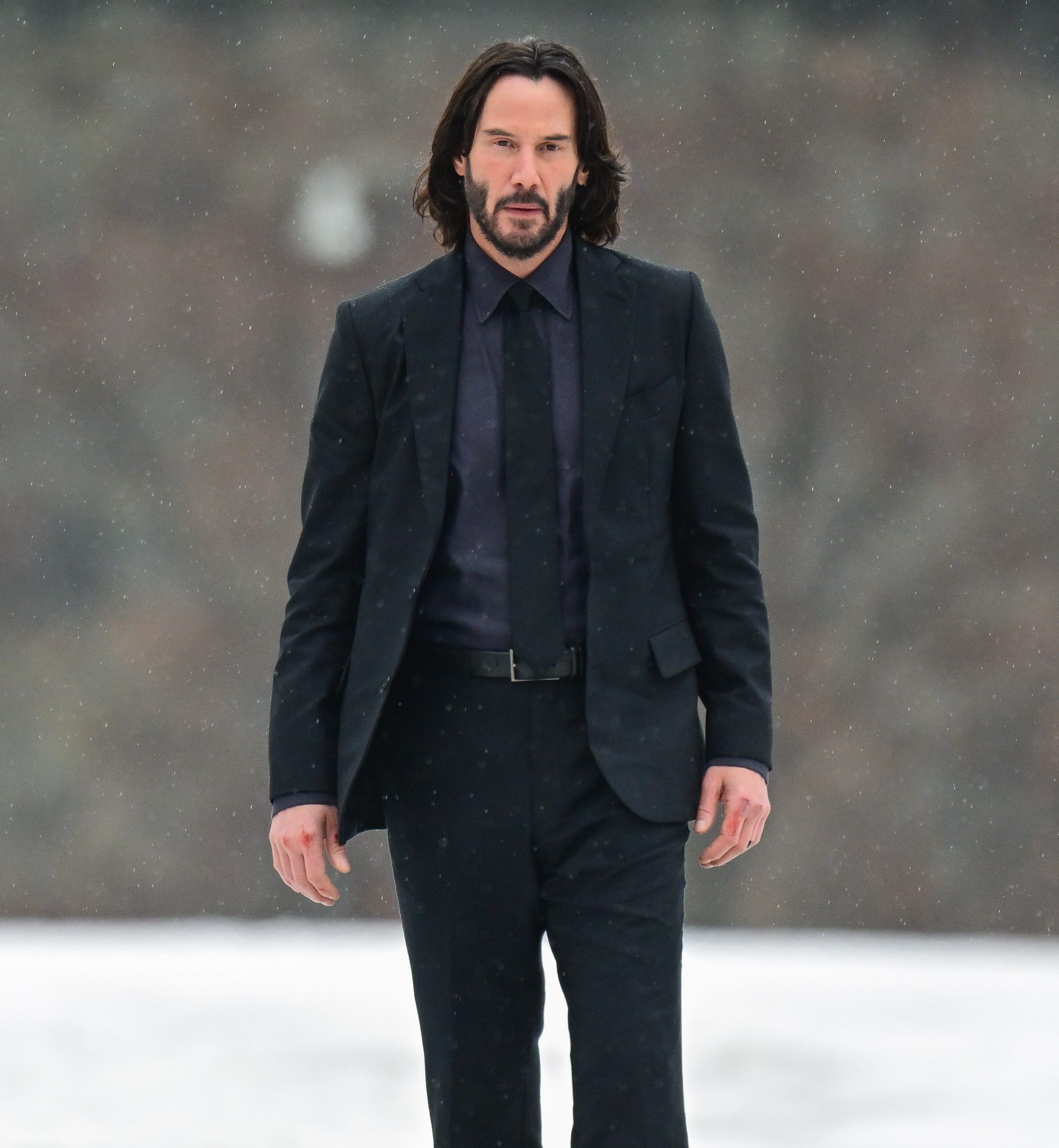 There are a handful of actors/actresses that hold a special place in our collective hearts. Whether they had one big blockbuster that brought everyone to the theater, or you consistently put out great movies, it can be difficult to gauge public interest. Keanu Reeves on the other hand, is beloved no matter what he does. Reeves has been acting on the big screen since the 80's and has touched just about every genre there is. Here is our list of the 20 best Keanu Reeves movies.

"Okay, it seems like a cop out to include more than one Matrix film on this list, but that’s exactly what we’re doing here. We’re copping out because each of the early Matrix films elicited an equally memorable reaction from the public that makes it worthwhile to include. To this day, we’re not sure if there’s anything that will top the reaction that everybody had in the theater when they saw Neo (Reeves) do that iconic bullet dodging backbend in slow motion for the very first time. That was incredibly high tech for the year 1999, and we don’t get theater moments like that very often anymore. In the future, there may be more Matrix remakes, but nobody will ever be able to top Reeves as Neo." - Jael Rucker

"If you are looking for some of the best straight up action cinema has to offer, the John Wick series is a must watch. As the story goes, John Wick is a legendary retired assassin who's wife had recently passed. The last gift she had left him was a puppy, who would meet an unfortunate end due to mobsters. John Wick would enact his revenge and then some, leaving a clear message: Do not fuck with John Wick. John Wick: Chapter 4 is slated to hit theaters in March of 2023." - Justin Cohen

"Fun Fact: Both The Matrix Reloaded and The Matrix Revolutions were filmed at the same time with filming for both beginning in 2001. Nowadays filming multiple sequels isn’t unheard of (I.E. Avatar), but back in the early 2000s it was considered a heavyweight approach. Reeves was just as calm, cool, collected, and badass in The Matrix Reloaded as what he was in the original movie, and despite many thinking the follow-up wasn’t on the level of the first film, the number’s said otherwise grossing $741.8 million worldwide, and becoming the highest-grossing R-rated film of all time until Deadpool surpassed it in 2016. Men lie, women lie, numbers don’t." - Jael Rucker

"There are a number of movies that had a deep impact on me as a child, but I'm not sure if any had as much an impact as Bill and Ted's Excellent Adventure. The wildly hilarious and dumb-witted combo of Keanu Reeves and Alex Winter make for some of the funniest dialogue exchanges in any movie. Beyond that, Bill and Ted's Excellent Adventure presents history in a fun and digestible form. I can genuinely say my love for history spawned after watching this movie." - Justin Cohen

"The Matrix Revolutions and Reeves’ third take on Neo holds a very special place in our hearts. While it might sound silly, there’s just something about the film that is very 2003. It represents a simpler time not just in our lives, but in the world of cinema. While not as commercially successful as The Matrix Reloaded from a box office standpoint, the film did receive positive reviews as Neo and the gang picked up right where they left off in the medical bay of the Hammer ship. Revolutions was another action-filled butt kicking movie, and was the first feature film to be released both in regular edition and IMAX at the same time." - Jael Rucker

"Point Break is so jammed pack with storylines and themes there is literally something here for everyone. You have Keanu Reeves playing Johnny Utah, a former Ohio State quarterback turned federal agent, tasked with infiltrating a gang of surfers who have been robbing banks across Souther California. Seriously, this movie has everything. A Patrick Swayze antagonist, Lori Petty as Keanu Reeves love interest, and a cracked out Gary Busey delivering hilarious line after hilarious line. This is peak 90's cinema." - Justin Cohen

"We didn’t have Keanu Reeves voicing a Toy Story character on our 2019 prediction board, but it was a welcoming sight to see. Reeves doesn’t do animation very often, but apparently there was something about Duke Caboom that tugged on his heart strings. In Toy Story 4, Woody, Buzz Lightyear, and the rest of the crew decide to go on a road trip with Bonnie and a new toy named Forky. The adventurous journey takes an unexpected turn as Woody encounters a reunion with his friend Bo Peep. The fourth installment of the Toy Story series was wildly successful, commanding $1.073 billion at the box office, and earning two Academy Award nominations amongst other accolades." - Jael Rucker

"Imagine you're on a bus. Now imagine that the bus is going 50 miles per hour. Finally, now imagine if that bus goes under 50 miles per hour it will explode. It might sound dumb, but that's the premise of Speed and it sets-up for nearly two-hours of high-intensity situations. There is some insane action sequences, but I really remember this movie for how great the plot is built out. This movie will leave you constantly anxious but is well worth the payoff." - Justin Cohen

"Do you guys remember how films in the mid-2000s had a bunch of different things going on at the same time that you had to keep up with? Constantine was one of those movies. Reeves starred as detective John Constantine whose main job was to oversee exorcisms and get rid of supernatural and bizarre creatures. In the meantime, Detective Constantine has to deal with his own life which has been filled with tons of hardship. In short, Detective Constantine hasn’t always been a good person, and because of that he feels that he has an automatic ticket to hell when he dies unless he drastically changes the course of his life. In the meantime, he also gets caught up in a supernatural plot involving demonic and angelic forces. See? There was a lot going on here, people." - Jael Rucker

"Without a doubt, The Replacements is the most underrated Keanu Reeves movie of all time. The Replacements is a very cheesy sports comedy about a rag-tag group of former athletes from all backgrounds signed to an NFL team to fill the places of players striking. Reeves delivers a wholesome performance as Shane Falco who helps lead his team to the playoffs. Jon Favreau also gives one of his funniest performances to date as a cop-turned NFL linebacker." - Justin Cohen

"Let’s take it back to 1992 when Reeves appeared in the film Bram Stoker’s Dracula alongside Gary Oldman, Wynona Ryder, and Anthony Hopkins. The then 27-year-old Reeves wasn’t a total newbie in the acting game, but he still had a ways to go on the ladder. In the film, Reeves portrayed a young lawyer by the name of Jonathan Harker who is sent to Dracula’s castle in the hopes of securing a land deal. However, thing’s take a turn for the worst when Count Dracula sees a photo of Harker’s fiance who happens to be a splitting image of his dead wife. As a result, Count locks up Harker, and sets sail on a journey to London to track her down. As for what happens next, well, you’ll have to watch the movie for that." - Jael Rucker

"Revisiting My Own Private Idaho today is a sad but poignant reminder how fragile life is. Keanu Reeves and one of his closest friends at the time, River Phoenix, stared in this Drama about two young men who travel across Portland, Oregon. The relationship between Reeves and Phoenix characters on screen was something not seen in big Hollywood at the time so it was quite refreshing. Sadly, River Phoenix would pass away of a drug overdose just a year after the film was released." - Justin Cohen

"Parenthood was a cool little 1980s film that focused on three siblings attempting to raise their children with different parenting styles, and was so successful that it eventually led to a spin-off television series being developed. While Reeves didn’t have a starring role in the film, he did make an impression as Tod Higgins, the boyfriend and eventual husband to Julie, a high school student who could care less about education. Not a bad credit to have on your film resume, especially as a rising 23-year-old actor in Hollywood." - Jael Rucker

"In Keanu Reeves directorial debut, he used the opportunity to show his true passion of martial arts. Man of Tai Chi is nothing new, but it is a great addition to the robust genre of Martial Arts movies. The movie may have only grossed $5.5 million at the box office, but this was a passion project for Reeves and his fans loved it. I would not be mad to see another martial arts movie directed and starring the great Keanu Reeves." - Justin Cohen

15.) The Day the Earth Stood Still

"Reeves embarked on another journey into the extraterrestrial world in 2008’s The Day the Earth Stood Still as Klaatu, an extraterrestrial visitor to this strange planet known as Earth. The film was a remake of the 1951 version (which itself was based on the 1940 short story Farewell to the Master), and Reeves received positive reviews for his take on Klaatu with critics calling the character charming as he tries to desperately change human behavior to save earth from environmental degradation." - Jael Rucker

"Rivers Edge is one of those movies that you sit and watch, thinking, 'what would I do in this situation?'. The 100 minute drama chronicles how burnout Samson murdered his girlfriend and then bragged about it to his friends later. Matt, played by Keanu Reeves, goes through a mental and moral debate internally the entire movie on if he should go to the police or not. The film is actually based on a real story where a California high schooler had murdered his girlfriend and even after bragging about to his friends, it took days for the police to be notified. Talk about a bystander effect." - Justin Cohen

17.) Much Ado About Nothing

"Labeled as a 'Shakespearean Farce,' Much Ado About Nothing was a rom-com based on the William Shakespeare play of the same name. In the film, Reeves took on the role of Don John, the illegitimate brother of Don Pedro who has an awful attitude. Don John doesn’t like to see anybody happy, and sets out to create a scheme to ruin Hero and Claudio’s relationship.The film earned $43 million worldwide, making it one of the most successful Shakespearean films." - Jael Rucker

"Keanu Reeves and Al Pacino. That's all you need to know about the Devil's Advocate. While the movie itself isn't anything special, seeing Reeves and Pacino on screen together for an entire movie is special. There are some great twists and Pacino delivers every line of dialogue with such sinister enthusiasm it really makes you think, is Al Pacino the Devil?" - Justin Cohen

"Now this is not a movie starring Keanu Reeves, I would even go as far to say this isn't a Keanu Reeves movie. Always Be My Maybe is a Rom/Com starring Ali Wong and Randall Park as childhood sweethearts reconnect after not speaking for 15 years. We do get one cameo from Keanu Reeves who plays... himself in this movie. Watch the above embedded video for the best 30 seconds of Keanu Reeves screen time that exists." - Justin Cohen