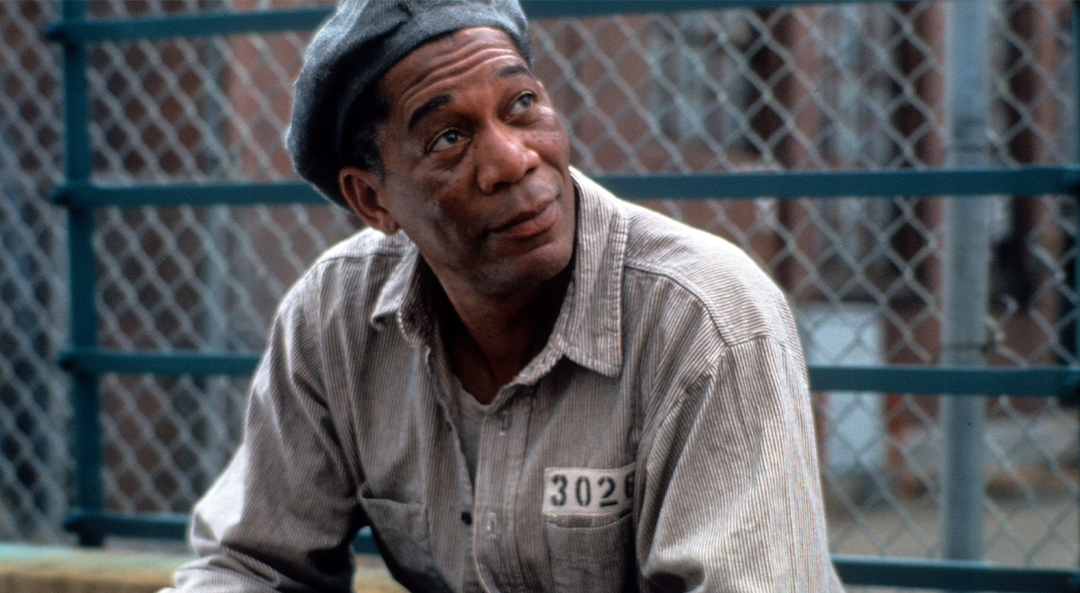 Morgan Freeman. Initials MF, making him Morgan “MF” Freeman. And rightfully so considering he is one of the most prolific actors in entertainment history. When you’ve had a storied career such as the one Mr. Freeman’s had, it can be hard to narrow it down to what’s considered to be your best. The recently turned eighty-five-year old has a resume that spans over sixty years, beginning his film career in Sidney Lumet’s 1964 drama The Pawnbroker, where he played the small role of a random man on the street. Unpacking the best Morgan Freeman movies can certainly be an arduous task.

The bit parts continued for over twenty years until his breakout role in the 1987 film Street Smart, making him approximately fifty-years-old at the time. That’s part of what makes Morgan Freeman so inspirational—he didn’t achieve mainstream fame until he was considered an “older actor,” proving that things may not always happen when you want it to, but more so when the timing is right. You can do anything at any age, and Freeman is an example of that.

With that, let’s take a look at a few of his best movies:

March of the Penguins

RELATED: The 15 Best Will Smith Movies of All-Time, According to ONE37pm

It’s only right that we start with the film that broke Morgan Freeman into Hollywood’s coveted A-list group. Released in 1987, Street Smart is about a struggling reporter (Christopher Reeve) who decides to make up a story regarding local prostitution when he can’t find any good leads to come up with an authentic article.

One of the characters in the reporter’s story is strangely similar to an old school pimp named Fast Black (Freeman) who is outraged over being “exposed.” An angry pimp is nothing to play with, and the movie earned Freeman an Academy Award nomination for Best Actor in a Supporting Role.

12. March of the Penguins

There’s two people on the face of this planet that have the best narrator voices ever, and that’s Morgan Freeman, and the guy from the All-State commercials. March of the Penguins is a documentary by filmmaker Luc Jacquet about the emperor Penguins annual journey to the South Pole at the end of each Antarctic summer to partake in their traditional breeding grounds. The narrator was of course Morgan Freeman, and the documentary itself earned an Academy Award for Best Documentary (feature).

It’s hard to believe it, but this classic film is turning the big 2-0 next year. Bruce Almighty was one of the most successful movies of 2003, earning close to $500 million at the box office. The cult classic is about a man named Bruce Nolan (Jim Carrey), who’s struggling to come to terms with the fact that his once successful television career is now, well, struggling.

Upon being passed over for a highly competitive tv anchorman job, Nolan complains that he is being treated unfairly by God, which spurs a counteroffer from God himself (Freeman) who offers him his powers to see if he can do a better job managing his life. An absolutely hilarious movie.

Angela Bassett and Morgan Freeman are a great power duo. Olympus Has Fallen is about everything going to H.E. double hockey sticks when a group of armed and highly dangerous terrorist decided to launch an attack on the White House.

The White House is overrun with President Benjamin Asher (Aaron Eckhart) and his staff being taken hostage, leaving Secret Service Agent Mike Banning (Gerald Butler) no other choice but to save the day himself. Olympus Has Fallen is a part of the highly successful Fallen series, with Freeman portraying U.S. Speaker of the House Allan Trumbull, who has to help lead Banning under these circumstances. Olympus Has Fallen is one of those kickback weekend afternoon movies that you watch to relax.

Also starring Kevin Costner and Alan Rickman, Robin Hood Prince of Thieves is the tale of Nobleman crusader Robin of Locksley (Costner) who breaks out of a Jerusalem prison with the assistance of Moorish fellow prisoner Azeem (Freeman). Azeem in turn becomes a trusted resources for Locksley, who upon returning to England discovers his father brutally murdered at the hands of the Sheriff of Notthingham (Rickman). Together Locksley and Azeem join forces along with a few others to help save the kingdom from the domination of the sheriff.

Before Samuel L. Jackson was in Marvel, we saw Morgan Freeman in DC, albeit in much different ways. The Dark Knight will always hold a special place in many DC/Batman fans' hearts due to the brilliant performances of everybody involved, and one of those performances was from Morgan Freeman, who portrayed Lucius Fox, Batman’s (Christian Bale) personal tech wizard.

The character was first introduced in the 2005 film Batman Begins, but here we see the role elevated as Batman needs even more gear and vehicles. Freeman would follow up his role as Lucius Fox in 2012’s The Dark Knight Rises.

Amistad is undoubtedly one of Morgan Freeman’s best when it comes to his filmography for a few reasons, the first being, it’s a Steven Spielberg directed project. Spielberg is a genius himself, and this film marks the only time the two have worked together. Set in 1839 on a slave ship sailing from Cuba to America, a slave uprising/rebellion is led by Cinque (Djimon Hounsou) in which they are eventually released in a controversial manner.

Freeman portrays freed slave Theodore Joadson who recruits a property manager Roger Baldwin (Matthew McConaughey) to help him secure the release of the other slaves. Yet another one of Freeman’s outstanding performances, adding another entry to his impressive filmography.

Who better to play Nelson Mandela than Morgan Freeman? Chronicling Mandela’s 27-year imprisonment and his tenure as President of South Africa upon his release, Mandela is faced with the difficult challenge uniting a country just month’s removed from Apartheid with tensions still very much high. An international rugby match becomes the center of Mandela’s attention when he realizes that the sport serves as a way to bring the divided communities together, and in turn develops a friendship with the team’s captain (Matt Damon). Invictus was directed by Clint Eastwood, earning over $120 million at the box office.

Serving as Ben Affleck’s directorial debut, Gone Baby Gone (which also starred his brother Casey Affleck), Gone Baby Gone is about a private detective (Casey Affleck) hired to find the missing daughter of Helene McCready (Amy Ryan). The prospects are bleak as the young girl has already been missing for over 72 hours, but takes on the assignment anyways as he recognizes that the danger has been lurking in his neighborhood for a long time.

Freeman portrays Captain Jack Doyle, who works alongside the detective to help figure out the case. It doesn’t take long for the detectives to realize that this case is much deeper than previously expected, and is a brilliant film with loads of twists and turns as the story progresses. Gone Baby Gone is a fine piece of art amongst Freeman’s resume for sure.

This, our friends, is the movie that finally got Morgan Freeman his Academy Award after many years of being overlooked. Also starring longtime friend Clint Eastwood and Hilary Swank, Million Dollar Baby hones in on the character of veteran Los Angeles boxing trainer (Clint Eastwood), who is very much anti-social, only associating with his old pal Eddie “Scrap Iron” Dupris.

When a young woman named Maggie Fitzgerald (Hilary Swank) unexpectedly arrives at the facility looking for training, a reluctant Frankie hesitantly agrees to offer his services. Freeman also narrates the film, and like we just mentioned, it was his passionate performance as Scrap Iron that finally nabbed him that Oscar.

Morgan Freeman and Denzel Washington have only collaborated once in their film careers, and that was for 1987’s Glory, which centers on a commander (Matthew Broderick) offered the role of leading the United States’ first all-African American regiment, the 54th Massachusetts Volunteer Infantry. The commander is able to put together a strong unit which consists of an escaped slave named Trip (Denzel Washington), and the wise gravedigger (Morgan Freeman).

There has been some talk over the decades as to whether or not the film is historically accurate, to which all accounts point to the answer as being yes. Glory is in fact the first movie to ever tell the story of the role of Black Soldiers in the Civil War, but it is fact checked as being accurate from a historical perspective.

Honestly, Morgan Freeman could have very well won an Oscar for Se7en as well. Portraying retired police detective William Somerset who decides to take on one final case with the new young guy on the scene (Brad Pitt) where they make a gruesome discovery of elaborate murders. It soon becomes very clear that they are dealing with a dangerous serial killer (Kevin Spacey), who is specifically targeting people who he thinks represent the Seven Deadly Sins. Morgan Freeman, Brad Pitt, and Kevin Spacey together in one film is definitely a good two hours spent.

Most agree that Shawshank is Morgan Freeman’s best when it comes to his movie catalog. While you can make a strong case for the others included on this list, it’s hard to top this heart tugging story which tells the tale of a man (Tim Robbins) sentenced to two consecutive life sentences for two murders that he didn’t commit. While imprisoned, he meets Red (Freeman), a wise older gentleman who helps him understand the ins and outs of prison life.

These thirteen movies are certainly not a complete roundup of all of Morgan Freeman’s films. Whether you agree with our selections or not, we can all agree that he has had a career for the ages.

ONE37pm may earn affiliate revenue for some of the links in this article.