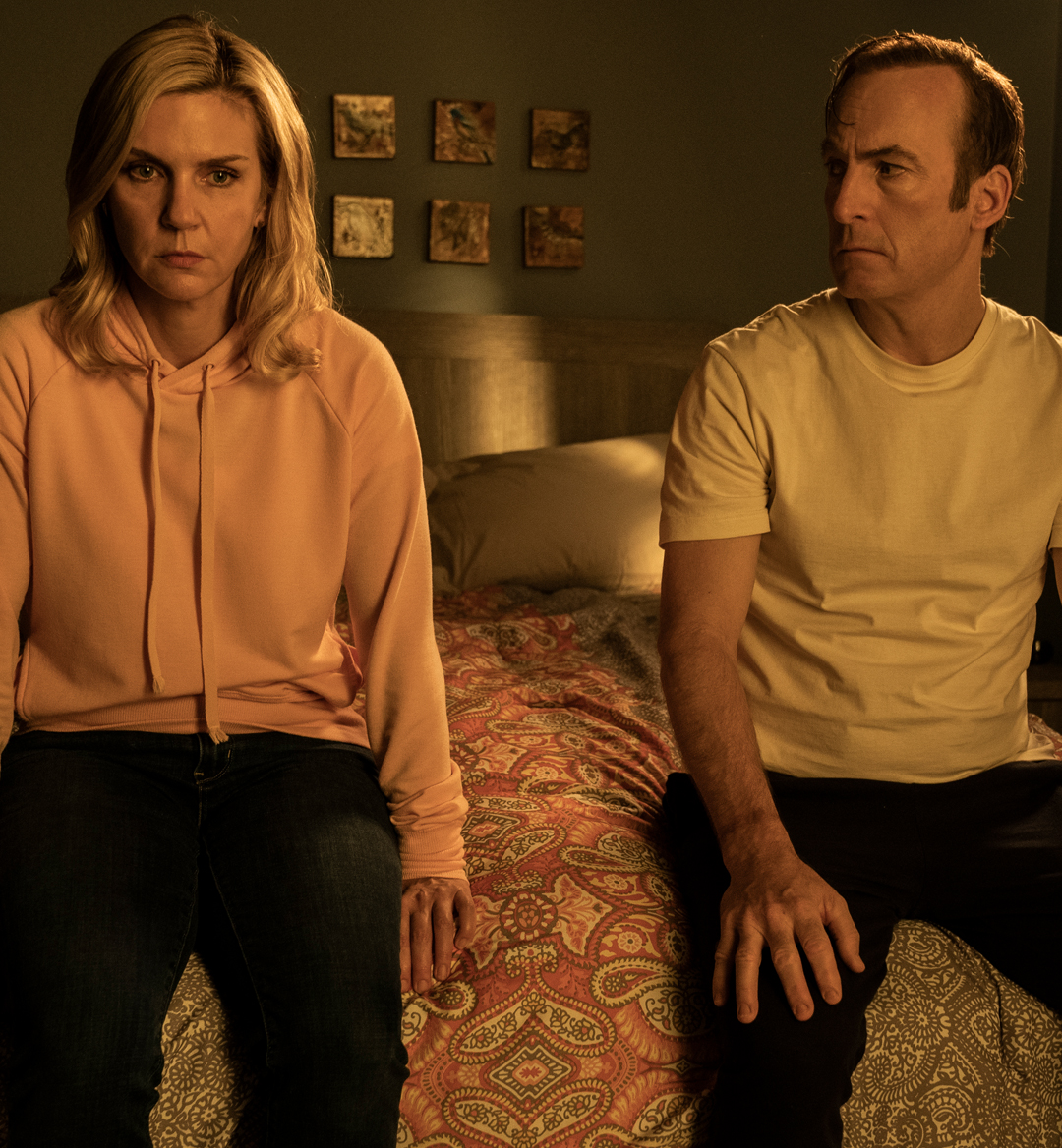 While it might have only been about six weeks since we last watched Better Call Saul, those weeks felt like years, given how the last episode ended. It was an explosive, shocking, and horrifying finale as we watched Howard Hamlin, a character we've known since the show's start, get executed by Lalo Salamanca right in front of Jimmy and Kim.

We all held our collective breaths in a near panic, trying to guess what would happen next, and even though we knew that Jimmy would survive, Kim's fate was a genuine concern. Lalo is a notorious psychopath who is not above killing innocents, so anything was possible.

Lalo's Going to Make Them an Offer They Can't Refuse... No, Literally 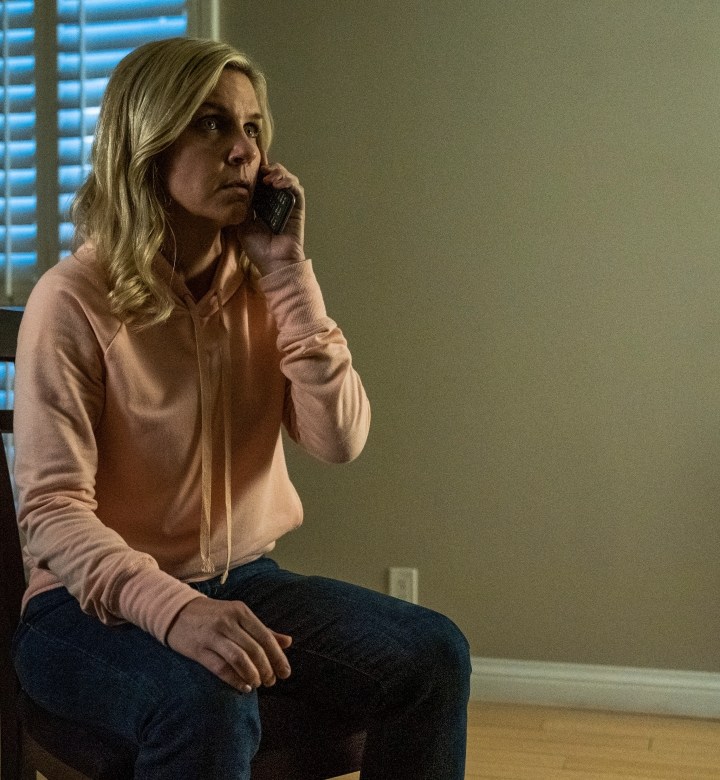 The episode begins with a peaceful shot of a beach, with the ocean waves crashing along the shoreline. We see a leather shoe floating in the water, and the camera continues to pan back as another shoe appears until finally we come across a familiar Jaguar parked on the sand, "Namast3" vanity plates and all.

The show jumps back into the past, and we see the immediate aftermath of Howard's death. Jimmy and Kim still stand in shock as Lalo tells them to remain quiet and remain calm; he's not there to hurt them.

At least not yet.

Jimmy attempts to reason with Lalo, saying he had nothing to do with any wrongdoing against him. Lalo hands Jimmy a note, giving him an address and a map to a house, telling him to take his car to get there. Once he gets there, Jimmy will take a gun Lalo has placed in the glove compartment, and once he gets to the front door, he rings the bell, and when the door opens, he shoots whoever is inside. Lalo also tells Jimmy to take a photo of the dead body, saying that Jimmy has an hour to do the deed; otherwise, Lalo will kill Kim.

Before Lalo finishes, Jimmy says that he should send Kim instead. Admittedly at first, I thought this was out of cowardice on Jimmy's part, but he simply wished to get Kim out of the room. He trusted Kim to get in touch with the police or get herself to safety. Even if the police got there in time, Jimmy recognized that whoever remained there would more than likely die.

On the way to the house, a police car pulls up next to Kim, and she seems to contemplate letting them know but only for a moment. Kim drives to the house, which we know belongs to Gus, following Lalo's instructions, and rings the bell. As she waits for the door to open, she's suddenly grabbed from behind by Mike, who takes her away.

At the apartment, Lalo ties Jimmy to a chair and gags his mouth. Lalo tells Jimmy about the assassination attempt that killed everyone at his house except for him. Lalo explains that he knows Nacho Varga set him up and that he's here because Jimmy was introduced to Lalo by Nacho.

Lalo turns up the volume on Jimmy's TV to drown out any noise Jimmy might make, and he leaves. Jimmy tries to get out of his binds but only succeeds in tipping over the chair he's tied to, leaving him face to face with Howard's corpse.

As Gus watches through the security cameras, Mike asks what happened and why Kim is here. Kim explains that Lalo is at their apartment, and Jimmy is being held hostage, much to Mike's surprise. She says she's supposed to kill Gus, take a photo, and then leave. She admonishes Mike and his crew for failing them, as he had promised to keep an eye on them.

Mike tells Gus to remain at his safe house while he and his crew go to the apartment to help Jimmy, but mostly to try and kill Lalo. It's here we see that Lalo is parked across the street from the laundromat, which he had learned the location of earlier this season and knows that Gus is building his superlab down there. As Mike's guys leave the place unguarded, he sneaks in through a fan on the roof.

Gunshots in the Dark 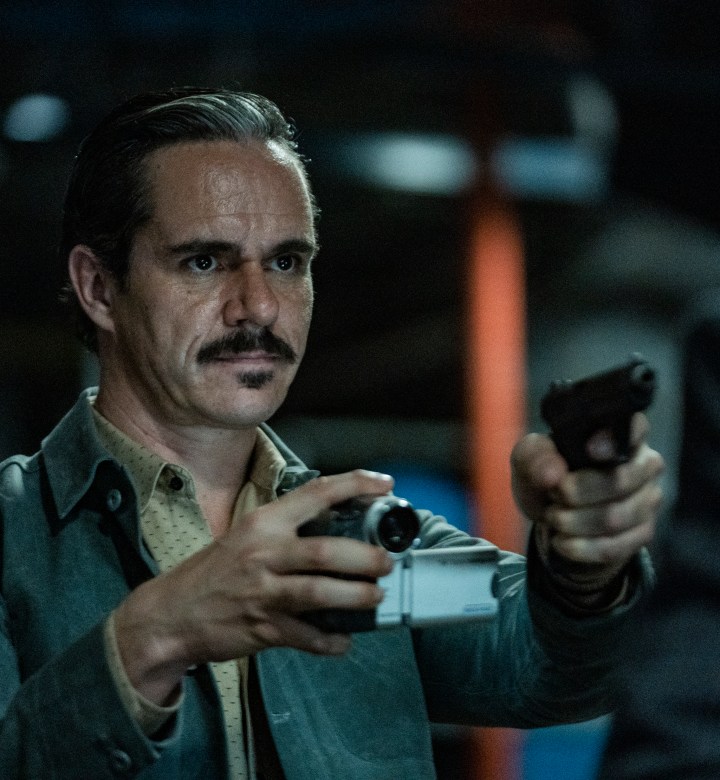 Gus is in his safehouse, becoming increasingly agitated and nervous that, for all his planning, he may be close to meeting his end. Gus gets Kim on the phone and asks why Lalo sent her to kill him, and she explains that he wanted Jimmy to kill Gus instead. After she says this, Gus is amazed that Jimmy, of all people, was able to convince Lalo to change his plans.

With some of his men in tow, Gus goes to the laundromat, thinking that Lalo may be there. As he walks through the facility, trying to see if anything is out of place, his men are gunned down by Lalo. He finally has Gus right where he wants him.

At the apartment, Mike maintains his perimeter with guys in every direction and a sniper on the roof of the opposite building. Mike and some of his guys go to Jimmy's apartment, where they find him bound and gagged on the floor. He lets Jimmy know that Kim is safe, and Jimmy lets him know that he doesn't know where Lalo went and that he left right after Kim did.

Mike attempts to call Gus, but Lalo has him at gunpoint and tosses his phone aside. Lalo films Gus to provide evidence to Don Eladio about Gus' schemes and gets him to open the secret entrance to the lab under one of the washing machines. Gus nearly refuses to open it, but Lalo shoots him in the chest, knowing that Gus is wearing a bulletproof vest. 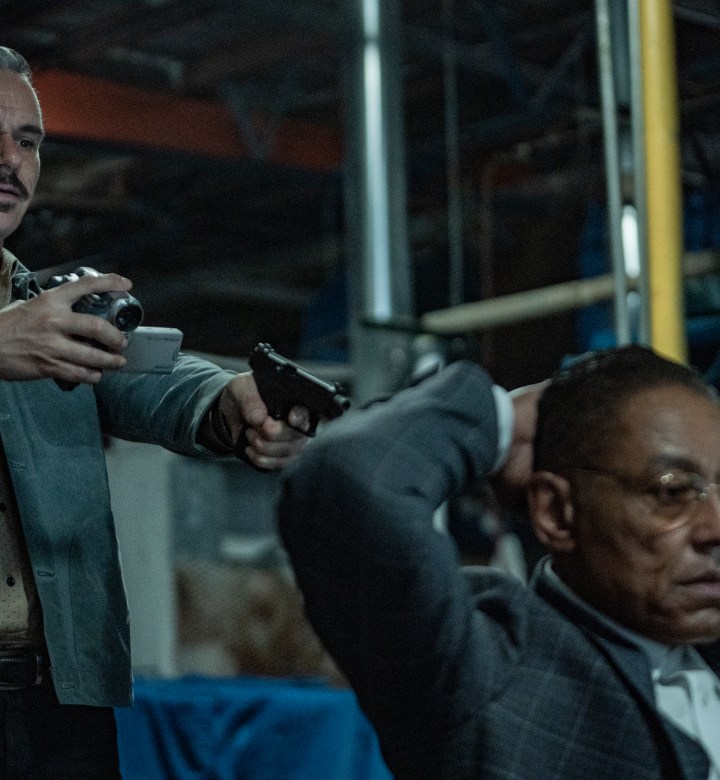 Gus brings Lalo down into the lab, which is still under construction, where Lalo explains just what Gus has been building for the video. Lalo had learned what Gus was doing from the German engineer he questioned when he was in Germany.

Lalo says that Eladio and the cartel could take over the lab and use it for themselves to cook meth. Before what he presumes to be his death, Gus lets loose all the hate he's had for Don Eladio over the years, ever since Eladio killed his brother.

Saying how dumb he was for not picking up on what he was doing here and spewing venom toward the Salamancas, especially Lalo and Hector, Gus suddenly switches back to English. Gus explains how he kept Hector alive but trapped in his wheelchair, saying that he will ensure that Hector knows he buried all the Salamancas before he's killed.

Suddenly, Gus kicks a plug on the ground that cuts the power to the room, and the lights go out. As Lalo shoots in the dark, Gus grabs a gun he had hidden there before and fires back. The gunshots from both men suddenly stop, even as Gus continues to fire from his empty revolver.

Gus turns the light back on and discovers Lalo's body on the ground, bleeding from the neck. With Gus standing over him, Lalo is slowly dying, and right before he finally expires, he laughs one last time and dies with a smile on his face. 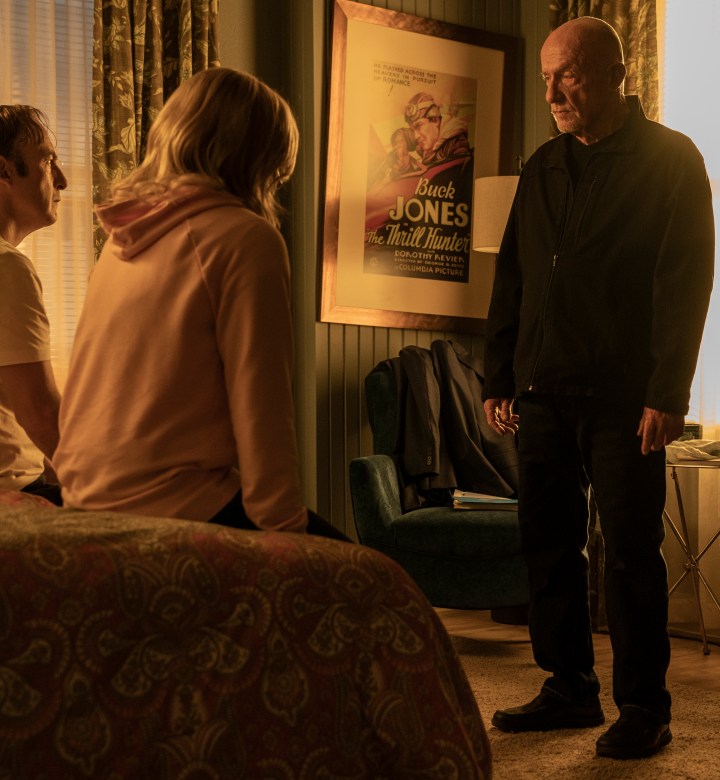 At the apartment, Jimmy sits in his bedroom as one of Mike's guys begins to empty his refrigerator. Kim arrives home, and both are still visibly shaken by what's happened, given how close they came to death.

Mike and the rest of his guys arrive with a brand new refrigerator, and as he stands over Howard's body, it becomes clear that they're going to use the old fridge to sneak the corpse out. Mike sits Jimmy and Kim on the bed and explains how this will all play out.

He says Howard's car will be found several states away by the water with cocaine in the upholstery. They're setting up the story as a suicide and that Howard walked into the water, never to be seen again. He says that people would have noticed Howard was there for hours and that they need to stick to their lie, explaining that they'll say he was there for hours but left, and they didn't know where he went.

They need to go about their day as if everything is normal, saying they need to do everything they can not to arouse suspicion. In a slightly menacing tone, he stresses that they need to remember that none of this ever happened, as far as they're concerned.

Back at the super lab, we see a deep hole being dug and two bodies lying next to it. Howard's body had been brought there, and he is tossed into the deep grave alongside Lalo. As the dirt begins to fall, Mike looks on with some regret that a man who was so far removed from this world must be buried alongside this monster. 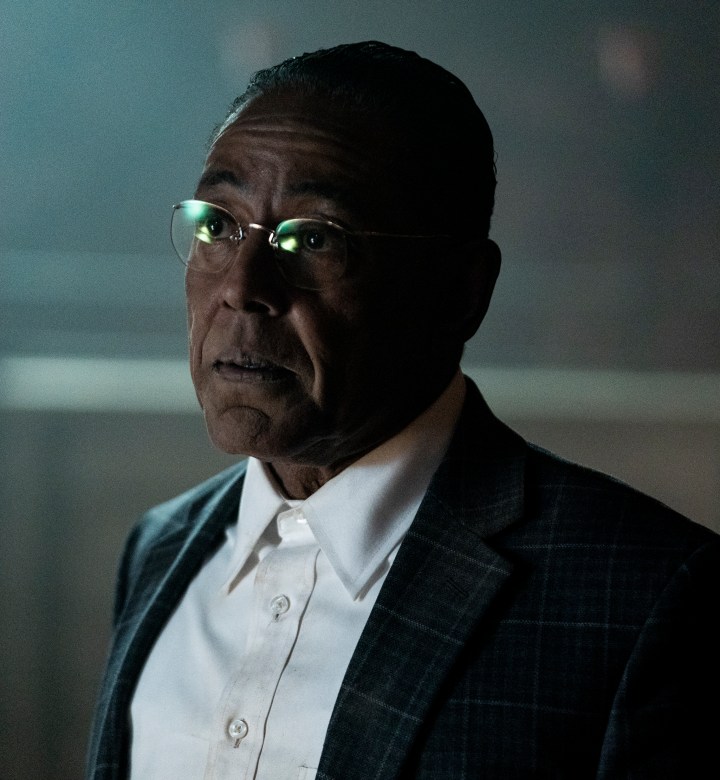 Better Call Saul has always been about the long game, even alluding to this sort of narrative styling in the earlier parts of this season. At the Sandpiper retirement home, Howard preaches the virtue of patience, and Better Call Saul is a show that follows that ideal wholeheartedly.

"Point and Shoot" was a start that seemingly finishes the Cartel plot line, as Mike and Gus find themselves in the position they need to be in prior to Breaking Bad.

While I was a little disappointed that Lalo was killed off so early, I understand the decision by the writers. They have so much ground to cover that trying to fit in more of the Cartel story would be using the time they really don't have.

Jimmy and Kim got themselves into this position by enacting their revenge plan against Howard. They didn't intend for Howard to get killed, but when you're involved in a world such as this, you should always be prepared for these consequences.

Five episodes of Better Call Saul remain, and while we know the fates of Jimmy, Gus, and Mike, Kim remains a mystery. Since the only genuine threat to her life was Lalo, her odds of dying have seemingly gone down, but anything is possible with this show.