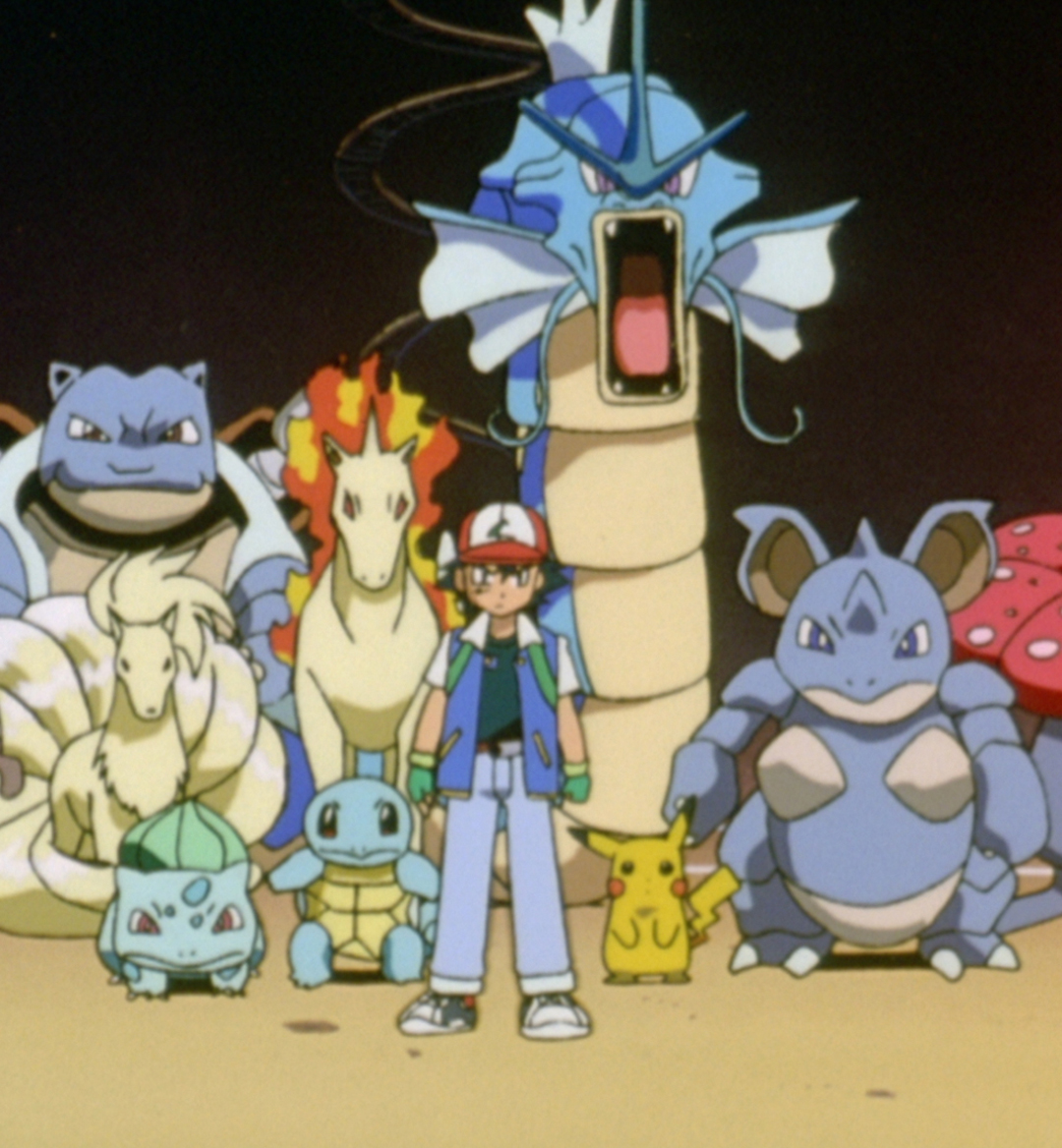 Pokémon is such a powerhouse that it’s not bound to just a few kinds of media. Though it originally started as a video game, it has since grown to become the highest-grossing media franchise, including books, films, comic books, animation, and more. Pokémon has grossed an estimated $110 billion in revenue, which is more than the MCU and Star Wars put together and Pokémon movies are a big reason why.

Approximately $1.85 billion of that number comes from the box office. The first Pokémon movie dropped in the summer of 1998 in Japan and November of 1999 in North America and ever since they’ve been dropping steadily for nearly a quarter of a century.

Below, we’ve outlined what all of the Pokémon movies are and what order to watch them.

How Many 'Pokémon' Movies are There?

In terms of actual Pokémon movies, there have been 23 animated ones and 1 live-action movie. There are also television specials and Pikachu shorts, but while they’re more than TV episodes, they don’t quite count as movies either.

What Order Should I Watch the 'Pokémon' Movies In?

For all but one series of movies, the release order for the Pokémon movies is actually also the chronological order, so that’s the order we’ve got for you. The first two movies released in the Sun & Moon series are actually set in an alternate continuity and the first is a CGI remake of a previous film, but this order’s great because you’re watching in release order and by the time you get to 2017’s I Choose You, it just feels like a prequel.

Where Can I Watch the 'Pokémon' Movies?

There isn’t one spot where you can stream all of the Pokémon movies, but for the most part, they’re easily accessible with platforms like Hulu and Prime Video.

In the first movie, Ash, Brock, Misty, and many other Pokémon trainers travel to an island where they think they’ll be battling another Pokémon trainer. Instead, they’re met by Mewtwo, one of the most powerful Pokémon ever. He’s genetically engineered and plans to take over the world with other cloned Pokémon. When released in Japan, this film grossed ¥7.6 billion at the box office in Japan.

In this movie, the legendary Pokémon Lugia is the focus. At a festival honoring Articuno, Zapdos, and Moltres, Lawrence III plans to capture them and Lugia. Ash, Misty, and Tracey find themselves there and must try to stop him. This film did slightly less than its predecessor at the box office in Japan, grossing ¥6.4 billion.

A girl called Molly Hale is left alone after her father Professor Spencer Hale is sucked into the dimension of the Unown after doing research on it. Delia Ketchum, Ash’s mother, is one of the people who go into the dimension to help. Ash and his friends do their best to try to retrieve everyone. This film grossed ¥4.85 billion at Japan’s box office.

The Pokémon at the focus of the fourth Pokémon movie is Celebi, a Mythical Pokémon. Celebi is being hunted down by the evil Iron-Masked Marauder of Team Rocket. Ash, Misty, and Brock meet up with Celebi and Sam, a boy from 40 years in the past. In terms of the box office, this film followed the downward trend since the first movie, doing just ¥3.9 billion at the box office.

Ash, Misty, and Brock are on their way to Alto Mare when Annie and Oakley try to steal the Soul Dew, a crystal that will give them access to the legendary Pokémon Latios and Latias. Without the crystal, the city cannot stay safe, so Ash, Misty, and Brock must keep it safe. This film did ¥2.67 billion at Japan’s box office.

Jirachi – The Wish Maker marks the start of the Ruby and Sapphire series for Pokémon. The Millennium Comet appears once in the sky every thousand years. This coincides with the awakening of Jirachi, a Mythical Pokémon. Jirachi grants a wish every time it awakens and this powerful capability makes it the target of former Team Magma member Butler. This film broke the descending box office numbers for Pokémon, pulling in ¥4.5 billion.

A meteorite that crashes into earth reveals Deoxys, who is eventually destroyed by the sky guardian Rayquaza. Four years later when Ash, May, Max, and Brock are visiting LaRousse City, they meet a boy named Tory whose parents are testing the egg from which Deoxys came in a lab. They end up having to protect the city. This film grossed ¥4.38 billion at Japan’s box office.

8. 'Pokémon: Lucario and the Mystery of Mew'

In Lucario and the Mystery of Mew, Ash, May, Max, and Brock must help Lucario trace the events that led to his abandonment. They must also save Mew, Pikachu, and Meowth from the Tree of Beginning. The eighth Pokémon film did ¥4.3 billion at the box office.

9. 'Pokémon Ranger and the Temple of the Sea'

The egg of Mythical Pokémon Manaphy falls into the hands of a pirate. A Pokémon Ranger gives the egg to May, telling her, Ash, Brock, and Max to keep it safe until it hatches. When it does hatch, the Manaphy must not fall into the hands of the Phantom, or it will lose its home forever. This film managed to gross ¥3.4 billion at the box office.

This film marks the start of the Diamond and Pearl series for Pokémon. Dialga and Palkia are battling in their dimension before the Space-Time Towers pull into Alamos Town. Ash and his friends must not only try to save the town before it gets destroyed but also clear the name of the Darkrai that people blamed for it. This film grossed ¥5.02 billion at Japan’s box office.

When dark clouds form in the Reverse World, Giratina goes after the cause of the storm, Dialga and Palkia. Giratina and Dialga battle in the Pokémon world and Giratina’s realm. Meanwhile, Ash, Dawn, and Brock help out Shaymin. Giratina & the Sky Warrior managed to gross ¥4.8 billion.

Michina Town is an ancient area that is surrounded by legendary Pokémon. When Dialga and Giratina continue fighting, a woman called Sheena who guards the town stops their battle and brings them peace. At this point, Arceus returns and wants revenge for the fact that the town betrayed him long ago. Ash and his friends must travel back in time to stop this betrayal from happening.

This time, the Pokémon Baccer World Cup should be the focus, and Ash, Dawn, and Brock arrive ready for the tournament but instead find themselves faced with Raikou, Entei, and Suicune who are destroying the city. It turns out that a villain is behind it all and they must stop him. This film did ¥4.16 billion at the box office.

As you might be able to tell from the name, this movie kicks off the Black & White series of the anime. In this movie, Ash, Iris, and Cilan arrive in Eindoak Town for a battle tournament. They meet the Victory Pokémon Victini, but not long afterward, he is captured by Damon who plans to destroy the world. This film did ¥4.33 billion at the box office.

15. 'Pokémon the Movie: Kyurem vs. the Sword of Justice'

Here, Ash, Iris, and Cilan must help the Mythical Pokémon Keldeo escape from the Legendary Pokémon Kyurem after it challenged it and failed to beat it. This film celebrates the 90th anniversary of Shogakukan, one of Pokémon’s main publishers. It did ¥3.61 billion at the box office.

16. 'Pokémon the Movie: Genesect and The Legend Awakened'

To close off the Black & White series comes Genesect and The Legend Awakened. While Ash, Iris, and Cilan are visiting New Tork City while the Genesect Army is attacking it. Ash is protected by Mewtwo, who surprisingly sides with the city despite sympathizing with the Genesect Army. Mewtwo and Red Genesect end up battling.

17. 'Pokémon the Movie: Diancie and the Cocoon of Destruction'

Diamond Domain is a land that is given power by the Heart Diamond, which can only be created by the princess, Diancie. Unfortunately, she does not have the power to do this and the land is aging. Ash and his friends must help her on her journey.

18. 'Pokémon the Movie: Hoopa and the Clash of Ages'

Ash, Pikachu, and friends meet Mythical Pokémon Hoopa who tells them the tale of a hero who stopped a scary Pokémon from taking over some time ago. It has been bottled up for a long time but is in danger of coming back once more. Ask and his friends must help stop it.

19. 'Pokémon the Movie: Volcanion and the Mechanical Marvel'

Closing out the XY series of Pokémon is Volcanion and the Mechanical Marvel. When Ash and his friends see a bunch of smoke in the sky, they come across Volcanion. Ash becomes bonded to it, despite the Pokémon hating humans. Ash must go with Volcanion as it tries to rescue Magearna.

Kicking off the Sun & Moon series is I Choose You!, which is actually set in an alternate continuity. We go to Pallet Town where it’s Ash’s tenth birthday and his goal is to become a Pokémon trainer with Pikachu by his side. This film grossed  ¥3.55 billion at the box office.

The Wind Festival in Fula City celebrates the Legendary Pokémon Lugia. A danger threatens not only the festival but the city and Ash and Pikachu must help to save it. The Power of Us grossed ¥3.09 billion at the box office.

This is a CGI remake of Pokémon: The First Movie – Mewtwo Strikes Back. Despite this, it still did ¥2.98 billion at the box office in Japan.

23. 'Pokémon the Movie: Secrets of the Jungle'

Interestingly, this movie is set in the alternate continuity that is first introduced in 2017’s I Choose You! movie. Ash and Pikachu meet Koko, a young man who is certainly a human but believes himself to be a Pokémon because that’s how he was raised. They help him realize his past, which eventually unearths a plot that could destroy the young boy’s home. This film did ¥2.02 billion at Japan’s box office, the lowest of any movie yet.

Detective Pikachu was the 2019 offering and is the only live-action Pokémon movie. It’s a mystery film directed by Rob Letterman and it’s a loose adaptation of the 2016 game of the same name. Tim Goodman’s father Harry Goodman goes missing, which prompts Tim to find out what happened with Detective Pikachu by his side. Tim is the only human that can talk to Pikachu, making for some interesting moments. The movie grossed an incredible $433,514,834 worldwide.

Watch Now on Netflix
Slide 1 of 3
Did you like this article?