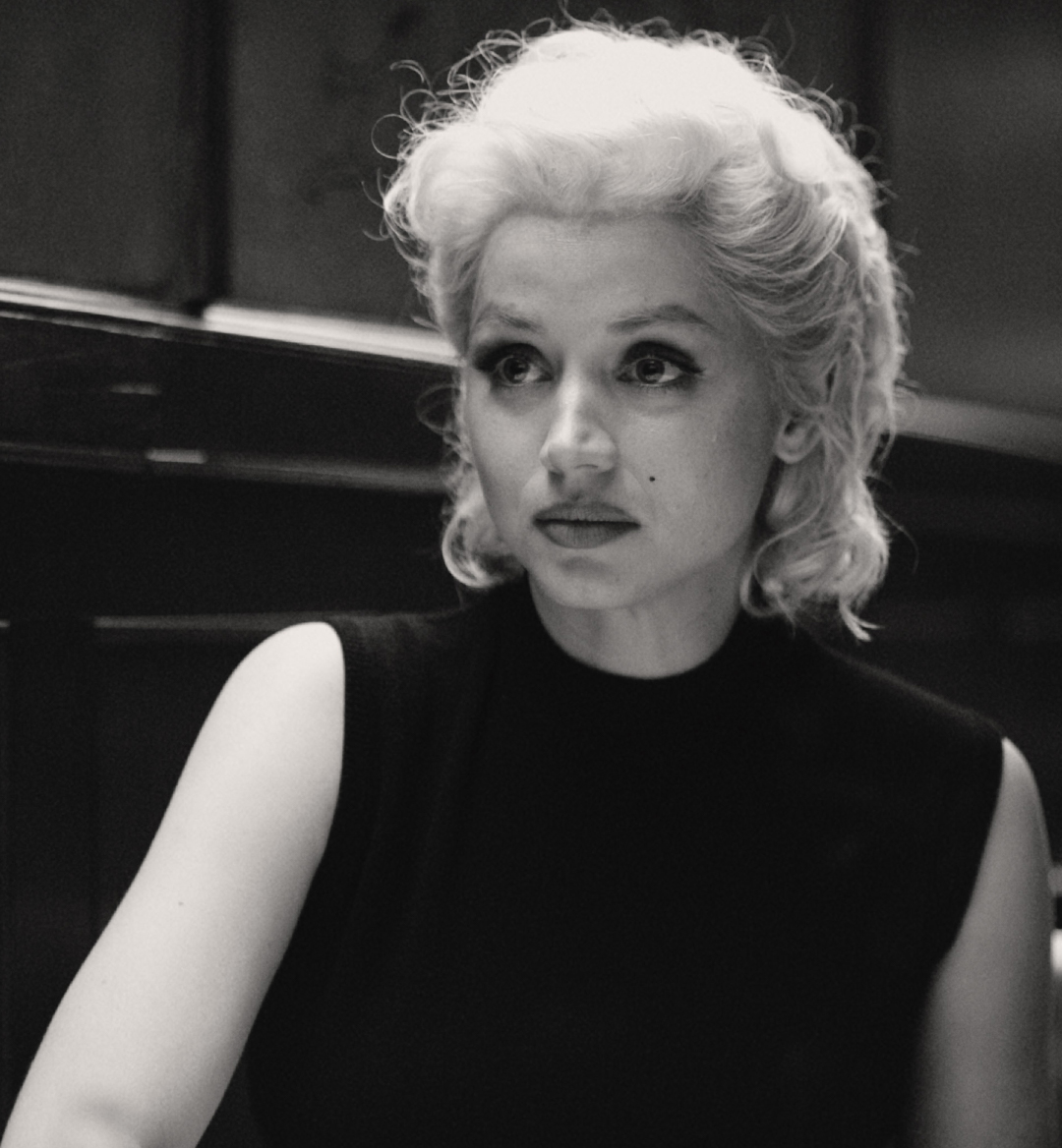 Is it really a Marilyn Monroe biopic if they don't exploit her all over again?

Actually, it's not even a biopic—directed by Andrew Dominik, the film is based on the historical fiction novel of the same name by Joyce Carol Oates, meaning that a fair chunk of what we actually see on screen isn't even accurate.

While one could go on and on (and on) about the pressing issue of how this movie is exploitative, that's not even the main problem. More than anything, it felt like an excuse to throw someone on screen who could really pass off as Monroe, and if we're discussing just that aspect of the film, then sure, it was successful. But in 2022, I'm not sure if that should be the point of a movie about one of the most complicated, iconic actresses—and women—of all time.

While Blonde did have a sense of order given that it was organized chronologically, outside of that aspect, it felt like the movie was flailing around with no set purpose. That overall disorderly feel is one of the main reasons the film clocked in at just under three hours—an absolutely absurd amount of time that legitimately forced me to take breaks, which I mostly used to stare at the wall and eat Doritos in silent confusion.

Quite a few scenes were purposely shot entirely out of focus in order to show Monroe's lack of grip on whatever situation she was currently in, though because we would spend so much time in those warped, blank-screened realities, major time was wasted in an effort just to be artsy.

This film felt like a whole experiment in the artsy realm, perhaps driven by the notion that films that appear artsy are more important, though all of the actual efforts to make that a reality for this film just felt like a flimsy veneer. Every out-of-the-ordinary camera angle was yet another distraction from the fact that the whole movie seemed a little lost.

Basically, Blonde was trying way too hard to be an "important" film when actual important films don't need to actively set out to make that happen. 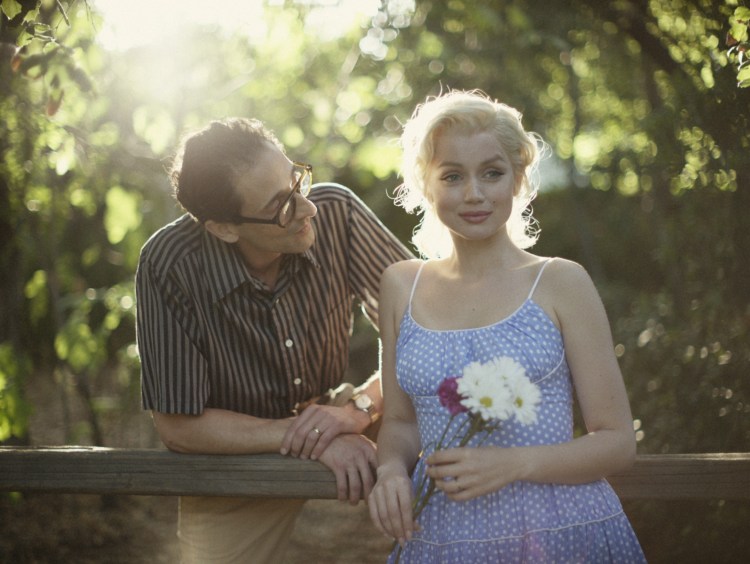 Cannavale and Brody were both physically believable in their roles as DiMaggio and Miller. Still, for a film that was so bent on being outwardly emotional, it felt almost completely devoid of it in their performances. While there was plenty of emotion shown on screen, it's as if there was a glitch that scrambled the transfer of emotion from actor to audience. It's possible that I'm just completely dead inside, but as a whole, the emotion was never a sucker punch—it just simmered on the surface, never being brought to a solid boil.

As for Ana de Armas' actual performance as Monroe, it was about the same as her co-stars'; people seem to be a little quick to unequivocally applaud her portrayal because they're distracted by how much she resembles Monroe. Now, if this film got anything right, it's definitely the casting: de Armas was practically a resurrected clone, forcing me to genuinely question whether certain scenes were actually using archival footage of Monroe.

While de Armas' portrayal was certainly the best out of the entire cast, it—again—just felt like something was missing. In watching Blonde, I kept wanting to compare it to Spencer, a film with a similar set-up being that both give their full attention to a central woman being depicted.

As Spencer doubled down on its intentions to be a psychological, up-close analysis and depiction of Princess Diana, Blonde found itself lost in the mix. Kristen Stewart transcended the film in her portrayal—the sheer fact that she received an Oscar nomination for her performance while Spencer itself did not is a testament to that.

In that sense, Blonde's overall disorganized state overtook de Armas' performance instead of her portrayal being strong enough to lift both herself and the film up out of the chaos. 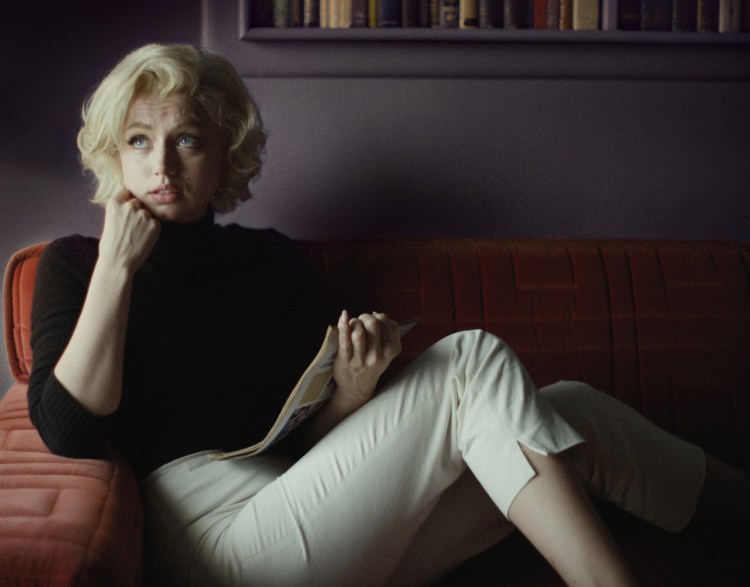 Now, let's not forget about what was actually happening in the film itself, which—at many times—was nothing short of bizarre.

At one point, we watch on as Monroe talks to her unborn fetus, which then proceeds to verbally respond to Monroe, resulting in a heated conversation between the two. The fetus is shown at various times throughout the film in utero, depicted through what seems to be stock-video imagery—in essence, something that would be shown in a boring documentary about the miracle of life. That fetus made so many appearances in Blonde that it deserves a casting credit on IMDb at this point.

Then, of course, we've got the staging of the famous white dress-over-the-sidewalk-vent shot, which we're forced to watch over a dozen times, making the film feel even more exploitative than it already is. After practically five minutes of replay upon replay of this, it just convinced me even further that Blonde is playing into the same things that ultimately led to Monroe's death back in 1962.

In that sense, the film is one big look into how little has changed over the last 60 years, which is suuuuuper comforting.