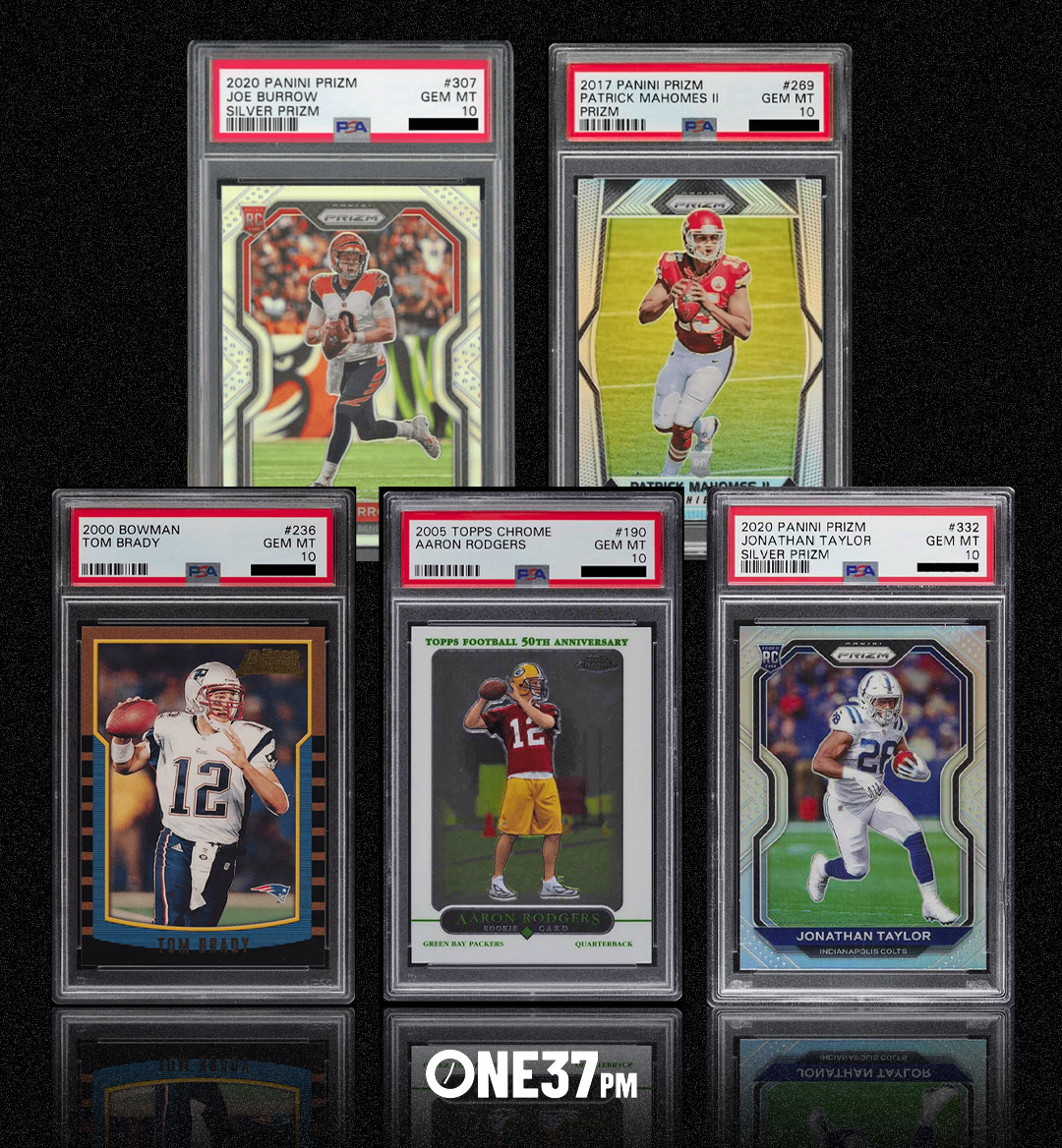 As we enter the first-ever week 18 of NFL football, it’s time to revisit the card prices of the top 10 most likely MVPs for the 2021–22 NFL season. Vegas Insider has just 10 players remaining as MVP candidates, but it’s clear that it will come down to Aaron Rodgers and Tom Brady.

Nonetheless, this list looks much different than it did when we wrote a too early look at the top MVP candidates in late September. Kyler Murray, the former top MVP candidate has fallen to the 8th spot. Justin Herbert, Lamar Jackson, and Russell Wilson are no longer on the list and Joe Burrow, Jonathan Taylor, and Cooper Kupp launched themselves into MVP contention.

Let’s dive in and see how the MVP odds near the end of the season have impacted card prices. 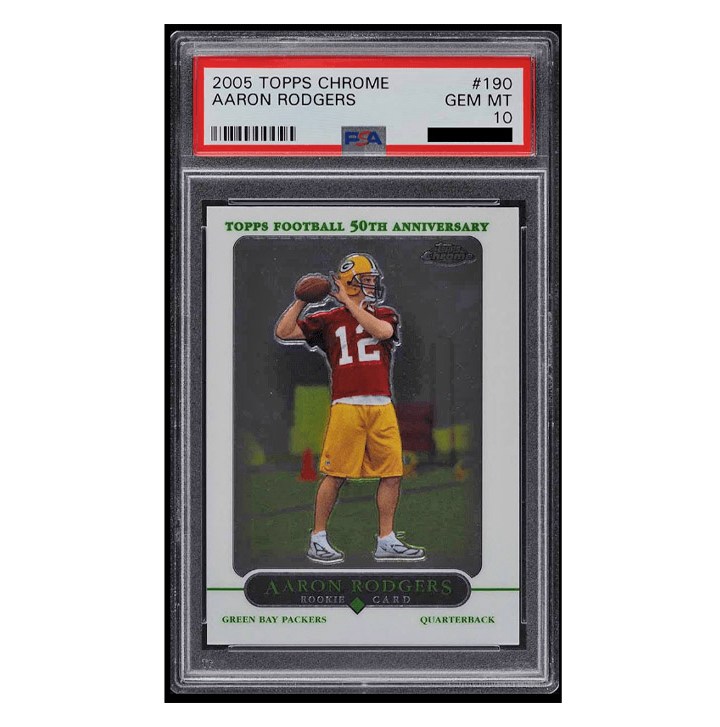 Aaron Rodgers and the Green Bay Packers are 13–3 and have clinched the top seed in the NFC heading into the playoffs. Rodgers won the MVP award last season, putting him in a tie for second all-time with 3 MVP awards. If he wins it this year, he officially takes second place for most MVP awards, moving past Jim Brown, Johny Unitas, Brett Favre, and Tom Brady.

It’s clear that the sports card market has responded to Rodger’s MVP-caliber season after a 68.6 completion percentage, 3,977 yards, 35 touchdowns, and just 4 interceptions. 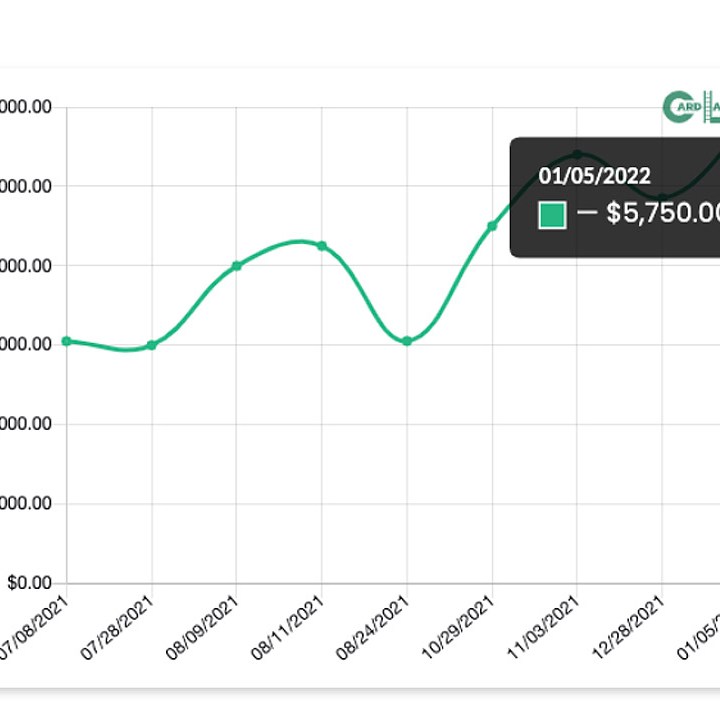 However, despite the gains of his most popular rookie base card, his Playoff Contenders Rookie Ticket Autograph (pop 54 in a PSA 9) last sold in November for $8,100 which is a $900 drop from its $9,000 sale in August.

His PSA 9 2005 Topps Chrome Refractor rookie last sold on 1/3 for $3,500, a $500 decrease from a $4,000 sale in August. Either the market hasn’t caught up to Rodgers’ rarer cards, or the current prices have absorbed his impending fourth MVP award. 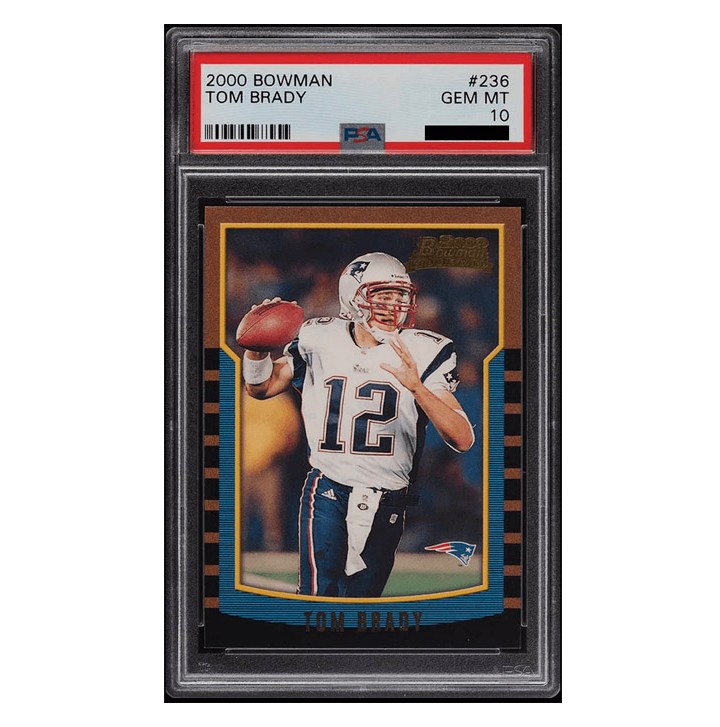 Tom Brady and the Tampa Bay Buccaneers are 12–4, NFC South Division Winners, and are the current 3-seed in the NFC playoff picture. However, the Buccaneers have lost two of their top receivers to injury and behavioral issues.

Brady’s thrown for 4,990 yards this season with 40 touchdowns to 12 interceptions. Not too bad for the 44-year-old 7x Super Bowl Champion, but the Bucs now have the 5th best odds to win the Super Bowl. 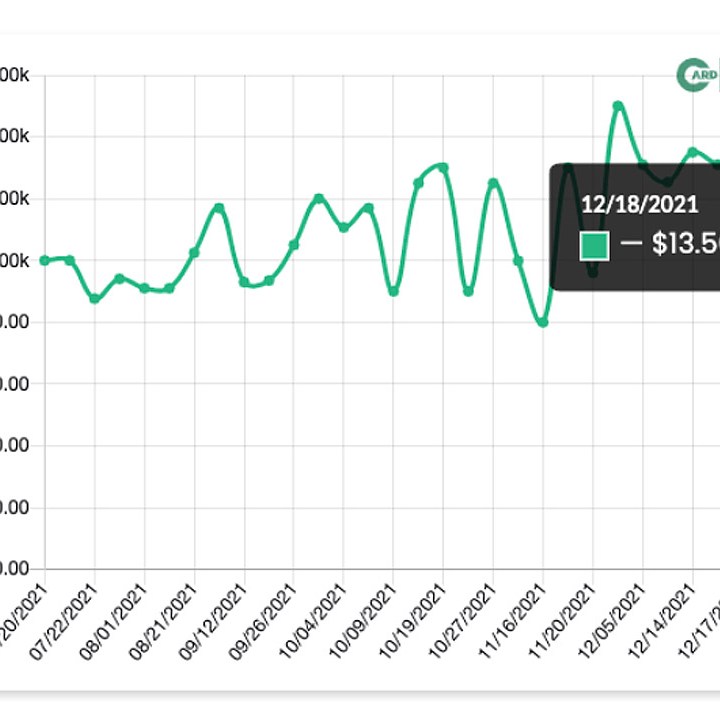 A number of Brady’s Bowman and Bowman Chrome rookie cards peaked in the third week of November when the Buccaneers looked like a lock for another Super Bowl, but have settled leading into the end of the season.

While it seems unlikely that Brady will edge out Rodgers for the MVP award, yet another Super Bowl run would likely positively impact the value of his cards. 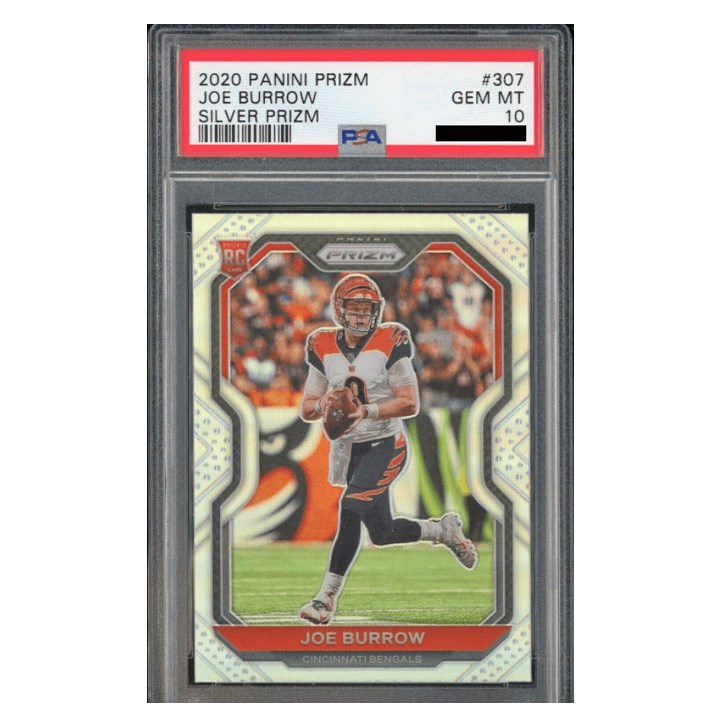 Joe Burrow and Ja’marr Chase have been a dynamic duo this season and the 10–6 Bengals have won their division to secure a spot in the playoffs. Burrow wasn’t even in MVP contention back in September but now he finds himself at number 3 on this list.

While it’s highly unlikely he wins the award, the second-year Quarterback has been impressive coming off an ACL injury with a 70% completion rate, 4,611 yards, 34 touchdowns, and 14 interceptions. The Bengals clinched the AFC North in style, defeating the Kansas City Chiefs by just 3 points. 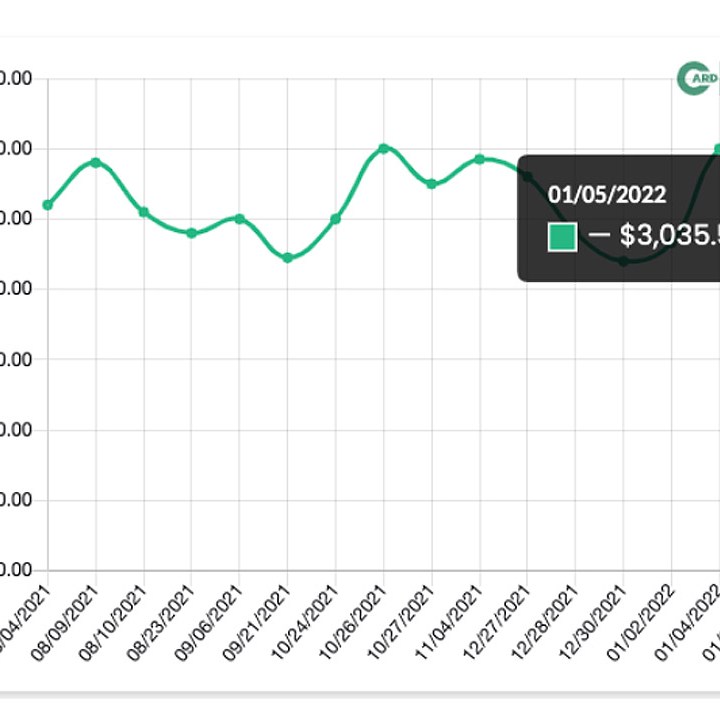 Burrow may not win the  MVP award this season, but he and the playoff-bound Bengals are certainly a surprise contender, and some of Burrow’s lastest card sales reflect that. 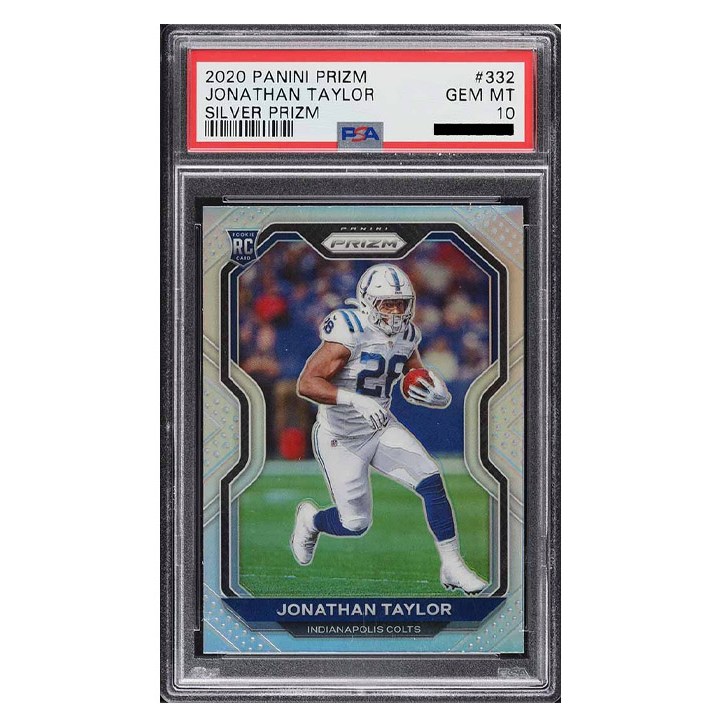 Jonathan Taylor has been an absolute beast this season rushing for 1,734 yards at 5.5 yards per carry, 108 yards rushing per game, and 18 touchdowns. He’s also added 342 receiving yards and 2 touchdowns.

While Taylor had a slow start to the season, he’s had two games this season with over 170 rushing yards and had a season-high 4 rushing touchdowns against the Buffalo Bills in Week 11. 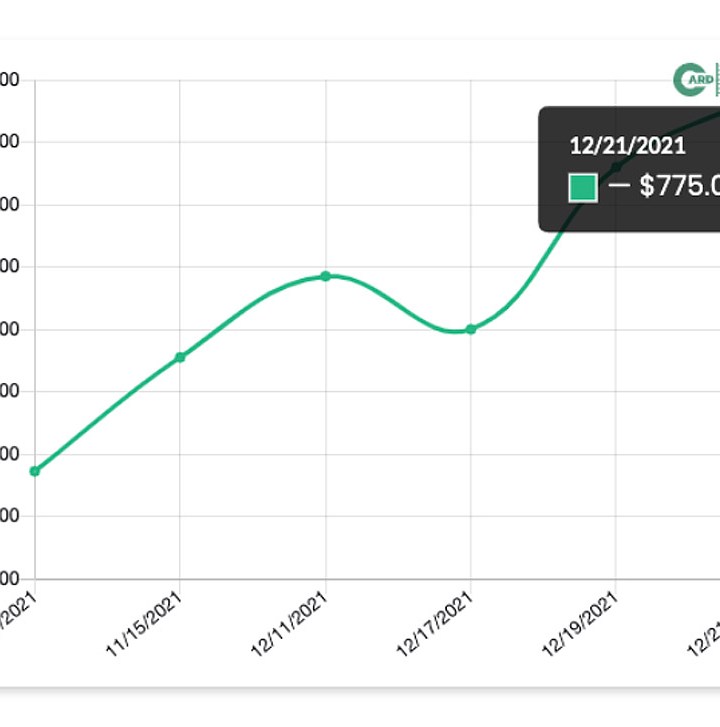 The Colts have an 82% chance of making the playoffs and if they do, it’ll be more time for Jonathan Taylor to shine. Positional players don’t get as much love in the hobby because of shorter careers and less spotlight, but Taylor’s remarkable season has helped his cards buck that trend.

For reference, running backs have an average career of just 2.57 years. 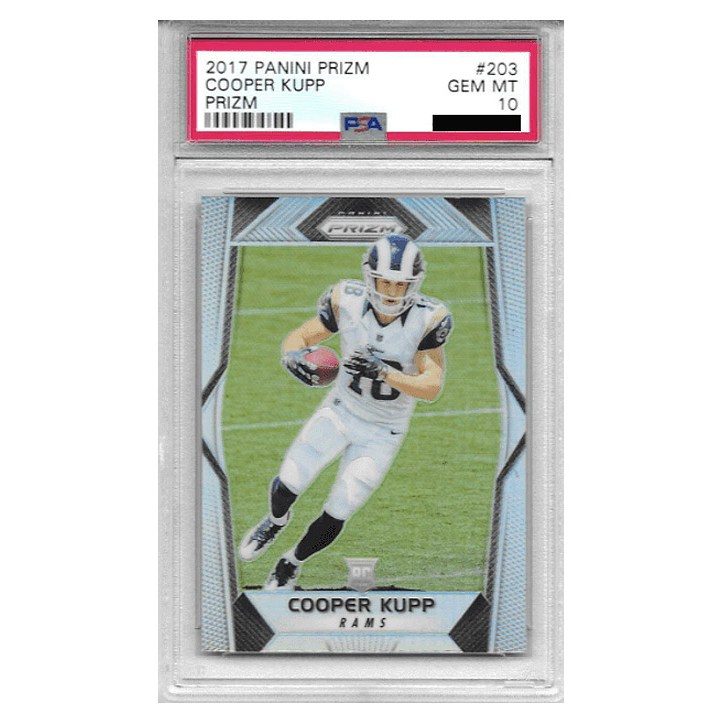 Cooper Kupp has better odds to win the MVP award this season than his own Quarterback, and for good reason. Kupp is having a historic season and is just 12 receptions and 136 yards away from all-time records in those categories.

While the records may be asterisked because of the extended season, his 138 receptions, 1,829 yards, and 15 touchdowns put him in elite company. 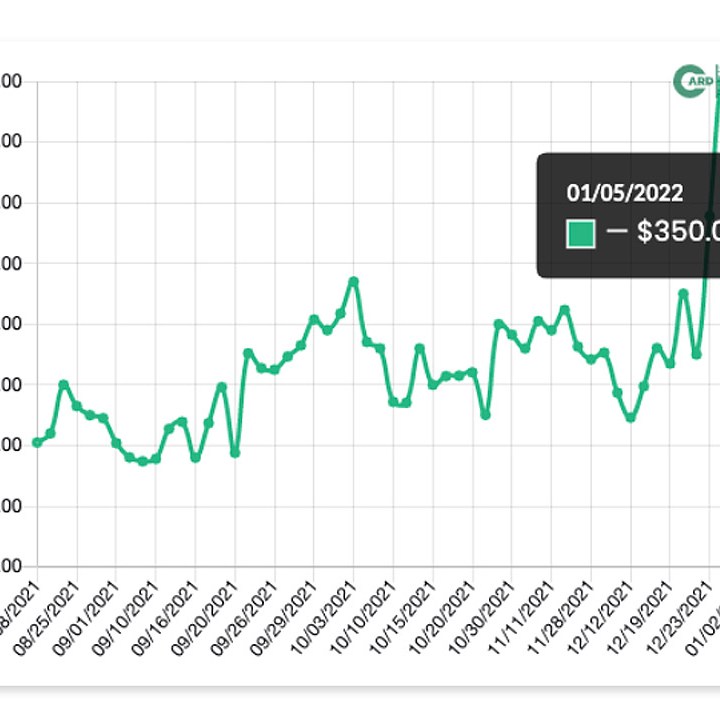 The Rams are 12–4 and headed to the playoffs, and Kupp has one more game to break some records. It’s not uncommon for a receiver’s rookie cards to command less money than Quarterbacks for the reasons listed in the last entry, but a 1/1 National Treasures Laundry Tag Patch (ungraded) sold for $2,500 on January 3rd via eBay.

Kupp’s prices have generally increased during his season and could see another spike if he breaks records in week 18. 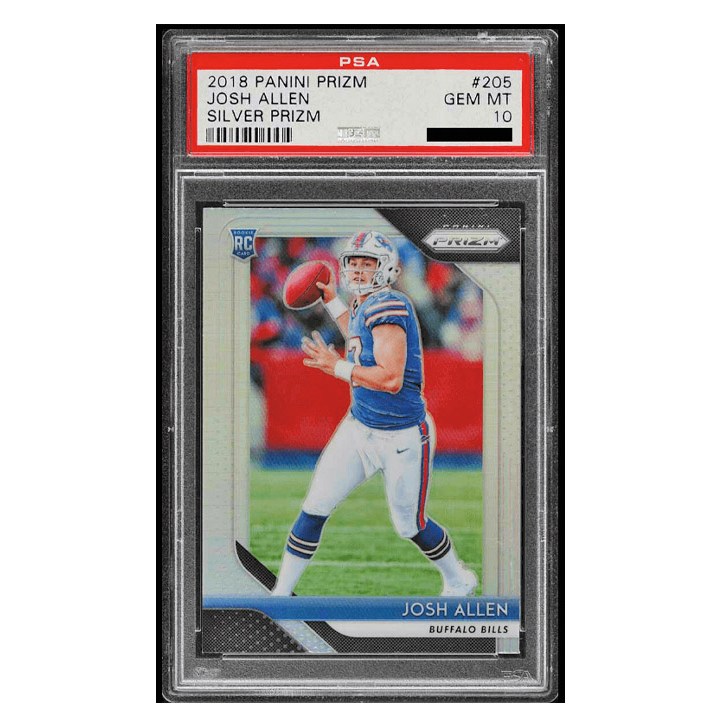 Josh Allen was hyped up coming into the 2021–22 NFL season after going 13–3 and making it to the AFC championship last year. However, the hype has died down on Josh Allen as the playoff-bound Bills are 10–6 this season. 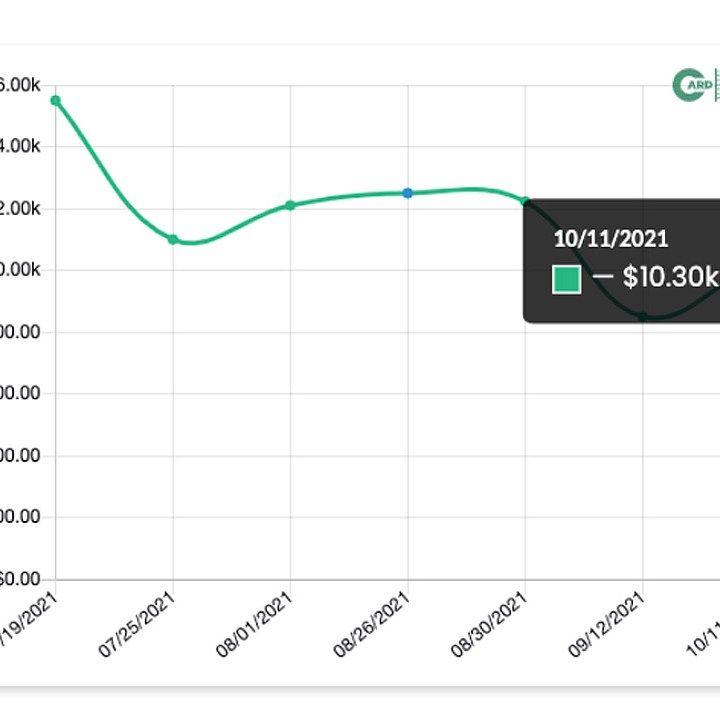 Cardladder projects the value of the card even lower, at $8,521.

If we zoom out and look at a two-year sales history, the card has experienced remarkable growth. It once sold as low as $255 in January of 2020 and has grown significantly in value since. Overall, Allen’s cards are on a general downtrend, but that all could change with a Super Bowl run. 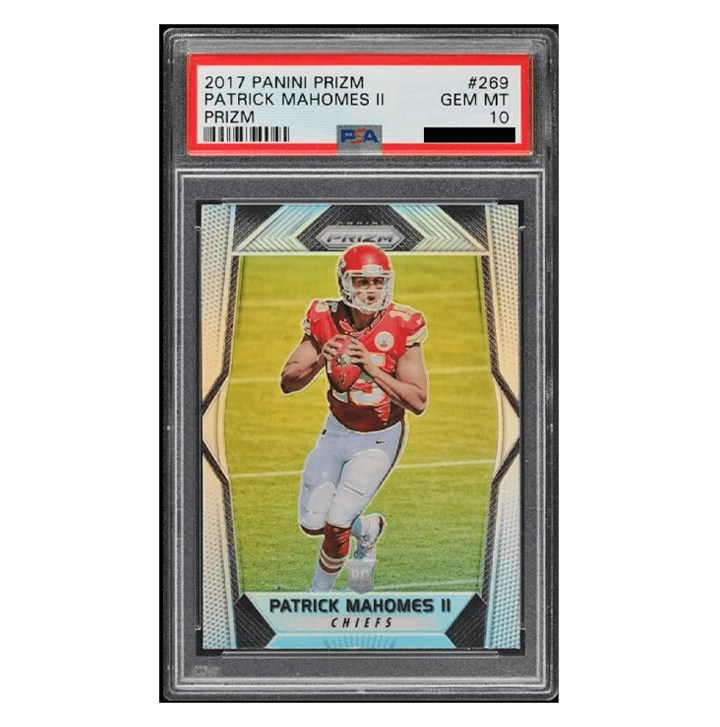 Despite being just 26 years old, Patrick Mahomes has an MVP award and a Super Bowl championship under his belt. Some of his rarest rookie cards have outsold the rookie cards of 7-time Super Bowl Champion Tom Brady throughout 2021.

The Chiefs clinched their division, but are 11–5 this season and Mahomes has seen his share of struggles. Mahomes has still thrown for 4,569 yards with 35 touchdowns to 13 interceptions and the Chiefs still have the 2nd-best odds to win a Super Bowl. 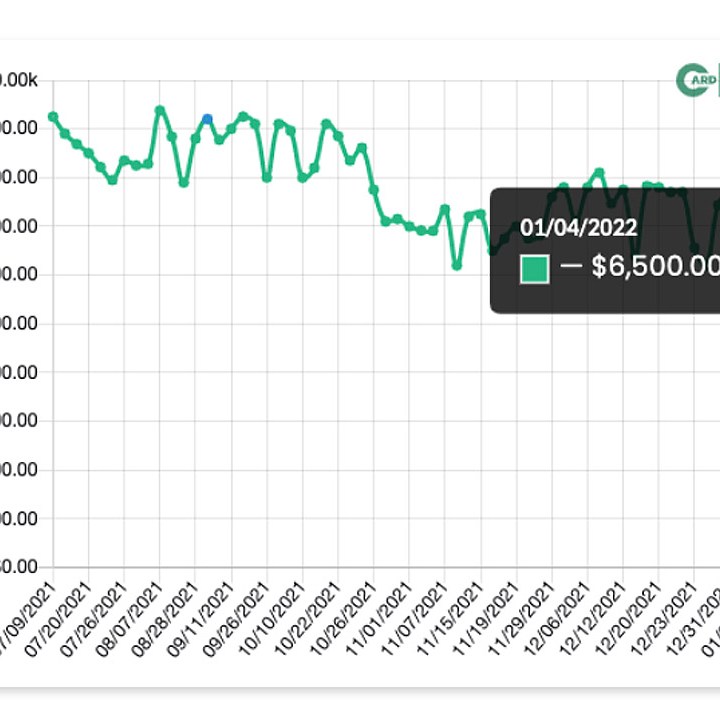 Mahomes may be struggling more than usual this season, but he appeared in 2 Super Bowls in his first 3 seasons (and should have been 3 for 3 if it weren’t for a gut-wrenching penalty). The market hasn’t lost total faith in Mahomes, as his 2017 Prizm Gold Vinyl (numbered to 5) sold for $660,000 this past October at Goldin Auctions. 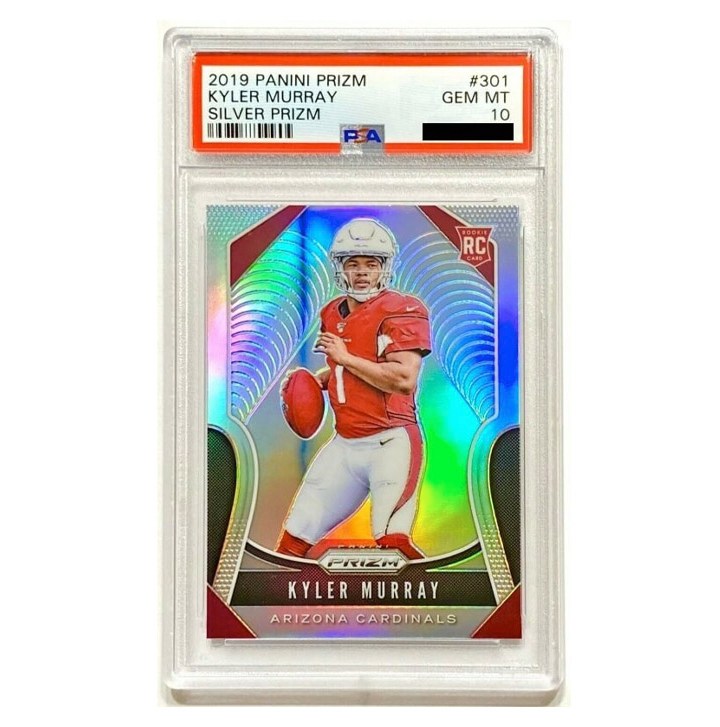 Kyler Murray was once the MVP favorite, especially after the Cardinals starting 7–0, but have since fallen to 11–5. They are playoff-bound, but now have the 8th best odds to win the Super Bowl this year.

Murray’s thrown for a 69% completion rate, 3,547 yards, and 23 touchdowns to 10 interceptions this season, despite missing 3 games to injury. 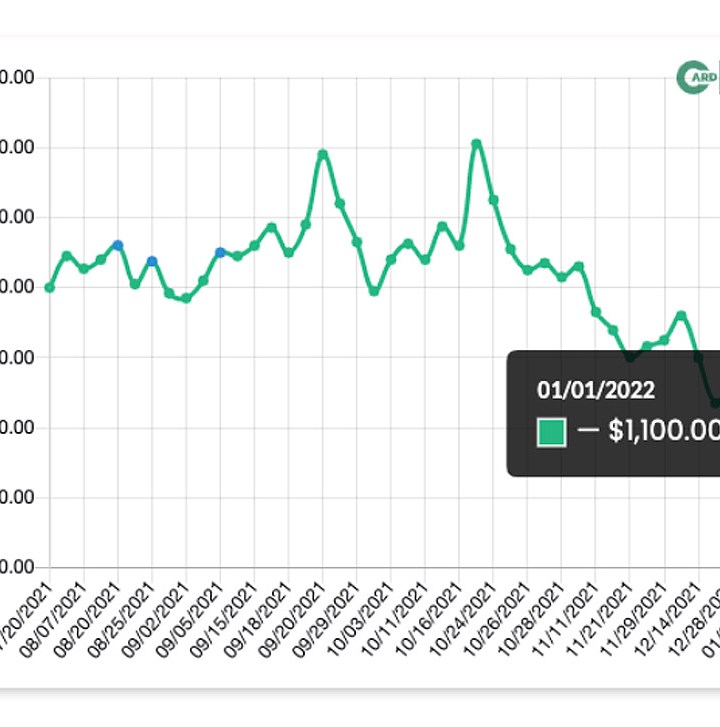 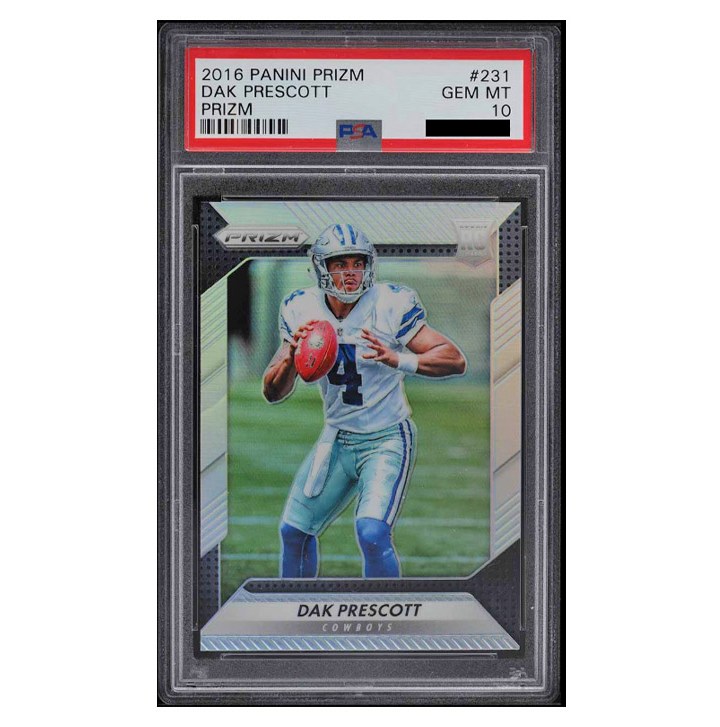 Dak Prescott and the Dallas Cowboys have clinched the NFC East with an 11–5 record this season with 1 game to go. Dak threw for 4,154 yards and 32 touchdowns to 10 interceptions after coming off of a gruesome season-ending injury. The Cowboys currently have the 6th-best odds to win the Super Bowl this year. 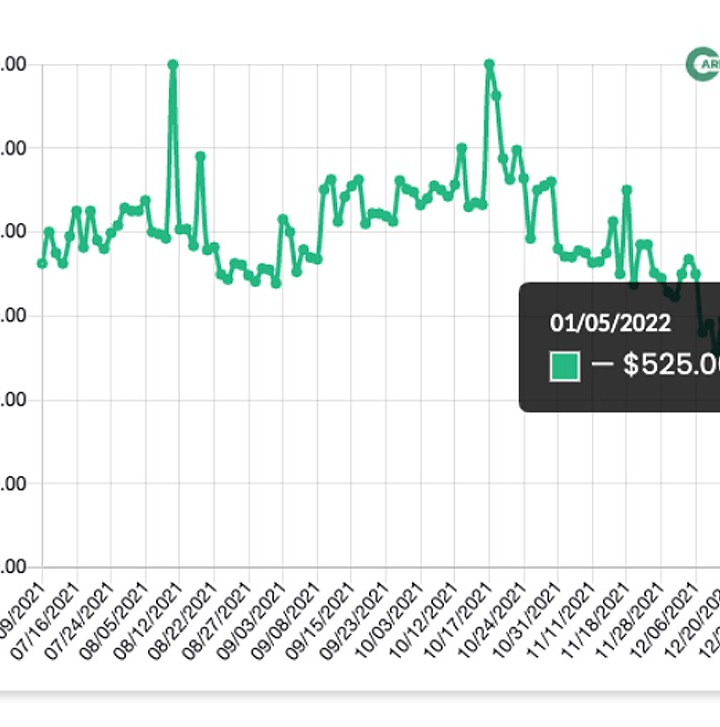 In that time frame, the card peaked at $1,200, before starting a steady decline after key losses to the Chiefs, Raiders, and Cardinals.

Like other Quarterbacks on the list, Dak’s rarer cards command eye-popping values. For example, his 2016 Prizm Gold BGS 9.5 sold for $43,200 in October via Goldin Auctions. 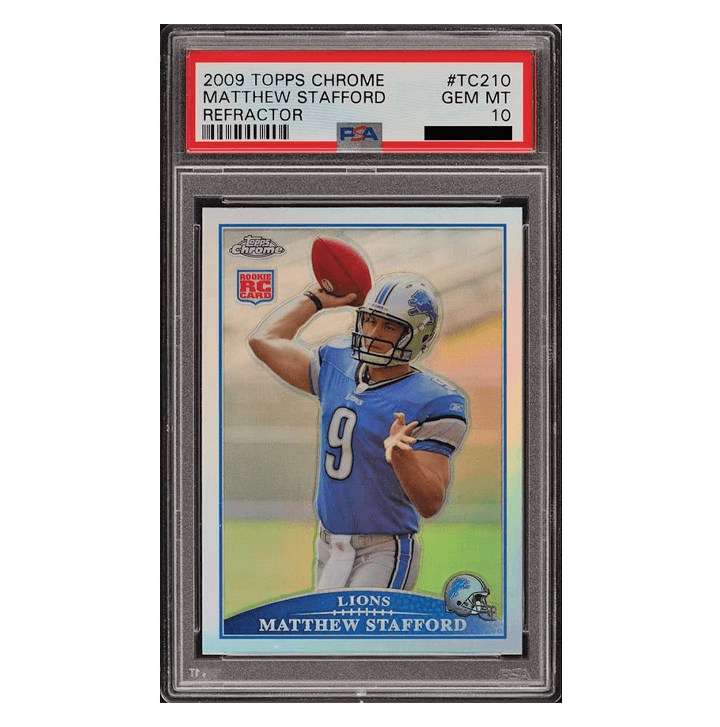 Matthew Stafford started the season with the 4th best MVP odds but has since dropped out of contention. Stafford is in his 13th NFL season and spent the last 12 with the Detroit Lions. He’s never won an MVP award, a Super Bowl and has never won a playoff game.

He’s thrown for 4,648 yards this season with 38 touchdowns to 15 interceptions but has thrown 5 interceptions in his last 2 games. The Rams are first in the NFC West at 12–4 and currently have the 5th best odds to win a Super Bowl. 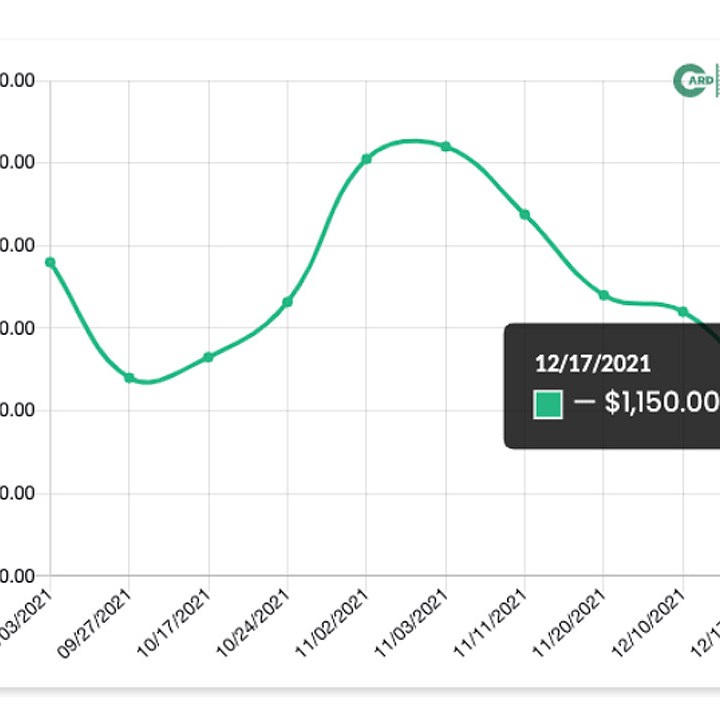 The card peaked at $2,600 in early November, but it would likely take a legitimate Super Bowl run to turn the downtrend around.