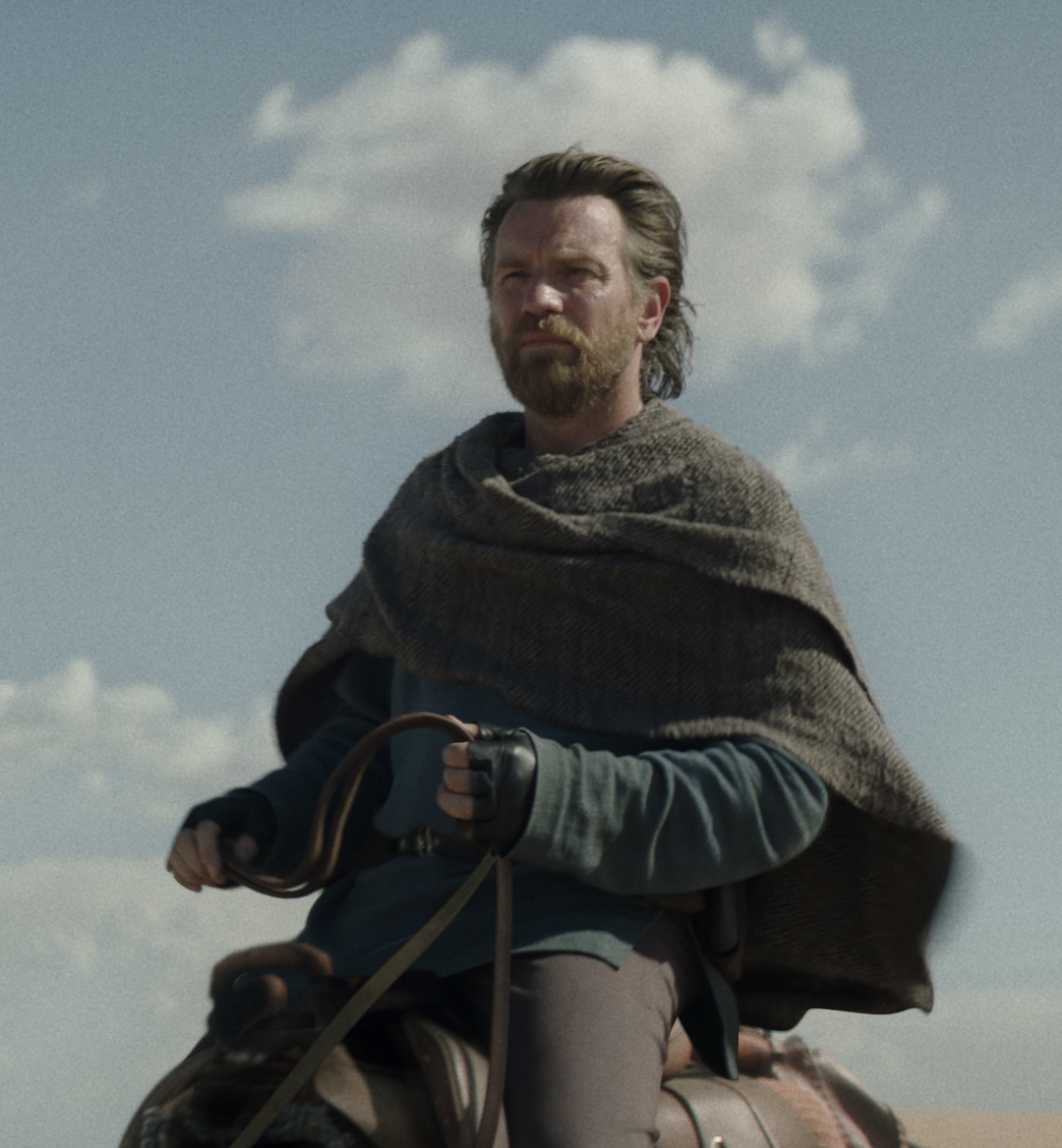 If there was one thing that we knew from the first teaser for Obi-Wan Kenobi, it's that the overarching theme of the series would be that hope—even when the light is most dark—survives. Whether through someone like Obi-Wan, a future Rebel like Princess Leia, a resistance fighter like Tala or Roken, or a con-man like Haja, hope will survive.

While at the beginning of the series we saw Obi-Wan at his lowest, we began to see him believe again, not just in himself but in people as a whole.

The Hunt is On 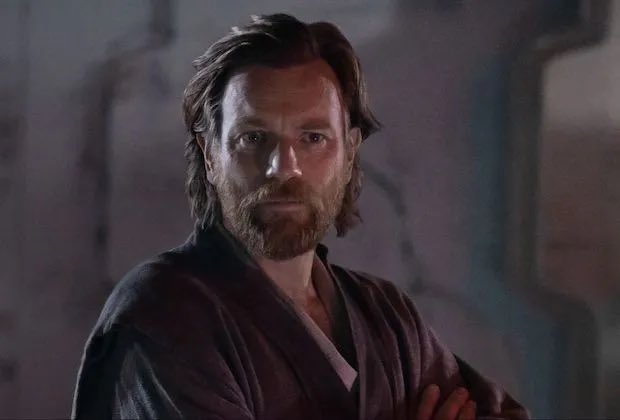 The finale begins on Tatooine, where we see Reva has arrived, clutching her side and struggling to recover from her injury at the hands of Vader. She says to a man in town that she's looking for a farmer named Owen, clearly still looking for whoever Bail Organa was talking about in his message to Obi-Wan.

Meanwhile, Darth Vader's Star Destroyer is pursuing the transport ship carrying Obi-Wan, Leia, and the remnants of the Resistance Cell. With the hyperdrive damaged and not likely to be fixed any time soon, Obi-Wan volunteers to take an escape shuttle to a nearby planet.

Knowing that Vader will abandon the chase and despite protests from Leia, Roken, and the others, Obi-Wan knows this is the only way. As Leia runs away, Obi-Wan makes Haja promise to get her back to Alderaan.

Owen finds that Reva has arrived on Tatooine and is looking for him; he returns home and tells Beru they need to leave. However, Beru refuses, hands him a blaster rifle, and tells him that they need to get ready for when she attacks that night.

Leia, angry that Obi-Wan is leaving, reminds him, "You said you'd take me home." Before leaving, Obi-Wan gives Leia Tala's blaster holster that Roken found before they fled Jabiim. Tearfully, they both say their goodbyes, with Leia making Obi-Wan promise that they will see each other again.

Obi-Wan speaks to Qui-Gon one last time, telling him that regardless of whether or not either of them dies, his conflict with Vader ends today. Vader tracks Obi-Wan's ship and tells his men to follow Kenobi.

Obi-Wan lands on the planet below and discovers that Leia had placed Lola in his pocket, hoping to make him feel less scared as it does for Leia. 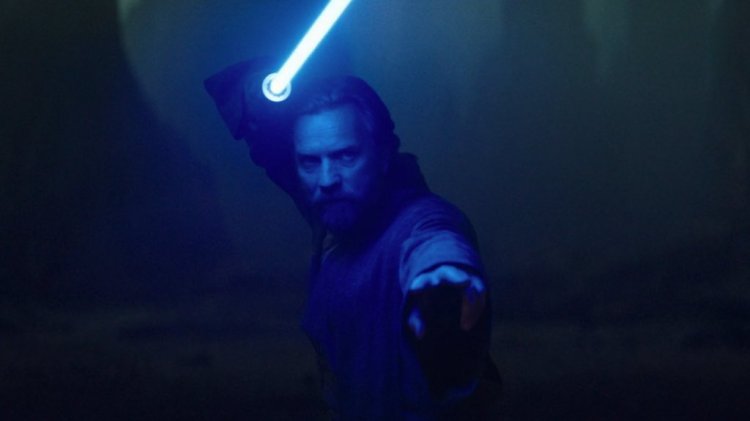 Vader lands on the planet, where Obi-Wan is waiting for him. They both eye each other down, believing that this is where it all ends for them. While the audience knows otherwise, the conversation that follows is no less impactful.

"Have you come to destroy me, Obi-Wan?"

"I will do what I must." Obi-Wan sure does love that line, doesn't he?

This time is different, though. They both know it, and Vader confirms it: "Then you will die."

The duel we've been waiting for begins, and as the music swells, both men fight angrily but look as strong as ever with the Force and their sabers. Vader knows that he's no longer fighting someone with the inexperience of Reva but the man who taught him all he knows.

Obi-Wan's strength has returned since the last time they saw one another, even knocking Vader back at one point and trying to bring down a rock face on top of him. "Your strength has returned, but the weakness STILL REMAINS," Vader goes on the attack and knocks Obi-Wan off his feet, causing the ground beneath him to crumble. Vader buries Obi-Wan underneath a massive pile of rocks and leaves Obi-Wan, saying he has failed again.

At the Lars homestead, Reva has arrived and begun her fight with Owen and Beru as she hunts for Luke. They both fight back and manage to hold their own, but Reva defeats them and chases after Luke, who has fled into the desert.

We then see that Obi-Wan hasn't been completely buried but has been using the Force to protect himself. As he hears the voices of his past, from Anakin to Darth Vader, and remembers his journey with Leia and his responsibility for Luke, he blasts his way out of the pit.

He catches up to Vader and goes on the attack once again. We see that Obi-Wan has truly reconnected with the Force, becoming the Jedi he once was and possibly even greater. He knocks Vader back, picks up dozens of rocks, and begins pelting him with them. Vader struggles to his feet and, for the first time in a decade, finds himself outmatched by an opponent.

#ObiWan spoilers
.
.
.
.
.
i will never ever recover from this pic.twitter.com/DC6zgu5CJl

Obi-Wan continues his attack and damages Vader's chest plate, causing his breathing to become labored as he struggles for air. Similar to the end of Return of the Jedi, we can hear him wheezing and his suit malfunctioning. He struggles to his feet, trying to bring Obi-Wan down, but after Vader is pushed away, Obi-Wan leaps and cuts off half of Vader's mask.

In what is sure to become one of the series' highlights, we see Anakin underneath. Hayden Christensen's voice blended with James Earl Jones', creating a tortured amalgamation that mirrors the man Anakin has become.

Tortured, broken, and seemingly beyond redemption. It is strikingly similar to a scene from Star Wars: Rebels, where Vader duels his former Padawan Ahsoka Tano. She also manages to cut off half his mask and hears Anakin's voice one final time.

Obi-Wan has beaten Vader, and as the Sith Lord looks up at his former master, his yellow eyes briefly fade, and Obi-Wan simply says, "Anakin."

Vader struggles to his feet and reminds Obi-Wan that Anakin is gone and he is what remains. Tearfully, Obi-Wan apologizes to him, hoping his former apprentice will forgive him. However, Vader says that he is not Obi-Wan's failure; Vader has no one to blame but himself for his fall.

"You didn't kill Anakin Skywalker. I did." The glow from Obi-Wan's blue lightsaber fades, and Vader's face is again illuminated by red. Obi-Wan recognizes that his friend is truly dead and leaves Vader there, calling him Darth. The name Anakin Skywalker no longer has any meaning.

Vader is left alone in the darkness, screaming for his former master to return.

We cut back to Reva as she causes Luke to fall right in front of her, knocking him out. Obi-Wan can sense something is wrong and moves to lightspeed to try and get back to Tatooine as fast as possible.

Reva ignites her lightsaber and moves in to kill Luke, somehow satisfying her need for justice. However, as she moves closer, she doesn't see him but rather herself, lying on the floor of the Jedi Temple all those years ago.

As Obi-Wan lands back at the Lars homestead, he finds Owen and Beru searching for Luke in the desert. He joins them when suddenly they see Reva holding Luke, bringing him back home. Obi-Wan prepares himself for another duel, but Reva didn't harm him. She is here to return Luke to Owen and Beru.

She confesses to Obi-Wan that she couldn't bring herself to harm him; killing a child wouldn't extinguish her pain. Reva still feels guilty for not helping her friends during Order 66, but Obi-Wan tells her that she has given them peace.

Reva has chosen not to continue down the path of the dark side, and all those years ago, when Anakin brought his mother's body back to that very home and started his journey toward evil, Reva walked away from it.

At Darth Vader's castle on Mustafar, he has himself a little FaceTime session with Emperor Palpatine. He tells his master that probes are out looking for Obi-Wan still and that they will destroy everything until he is found.

Palpatine sees Vader as possibly being weakened by his obsession with Obi-Wan and tells him that he should leave his past behind. Vader says that Kenobi means nothing and that he serves only the Emperor.

On Alderaan, Leia is getting ready for guests to arrive and her duties to greet them. Her outfit combines future and present Leia with boots, gloves, and Tala's holster, all paired with a dress.

As a ship lands, we see Obi-Wan exit, bringing Lola back to Leia. Obi-Wan reunites with Bail and Breha Organa, and Obi-Wan promises them that if they need his help, he'll be there.

Obi-Wan talks with Leia and says that even though he said he didn't know her parents, he admits that he did. While he doesn't say who they were, he tells her how much she reminds him of them. Leia's theme from John Williams begins to play, and he wishes he could tell her more, but that's good enough for Leia.

Leia asks if they'll ever see each other again, and Obi-Wan isn't sure but promises that if she needs help from a "tired, old man," she can reach out. She hugs him, saying, "goodbye, Obi-Wan."

The Force theme begins to play, and Obi-Wan departs, returning to Tatooine. Obi-Wan collects his belongings in his cave, leaving behind the life he thought he was doomed to remain in. He finds the toy shuttle he bought for Luke and rides for the Lars homestead, hoping to give it to him finally.

Owen spots him riding in and asks Obi-Wan what he's doing here. He lets Owen know that he'll be leaving them alone from now on, placing his trust in Owen and Beru. Owen invites Obi-Wan to meet Luke, and he accepts. Obi-Wan gives Luke the toy and, in a moment that's pure fan service, says, "hello there."

Obi-Wan rides out into the desert, where he finally comes across an old friend: the Force ghost of Qui-Gon Jinn. He had begun to think that Qui-Gon would never come, but his master says that he's always been there, but Obi-Wan was not yet ready to see.

Qui-Gon leads the way, and as he fades away, Obi-Wan continues his journey towards a new home.

In a series of ups and downs, Obi-Wan Kenobi saved its best episode for last. Packed with emotion, action, and nostalgia, "Part 6" delivered a satisfying conclusion to this limited series.

It's tough to produce a prequel movie or show when the audience knows the fates of certain characters, especially primary ones. However, where Obi-Wan Kenobi succeeds the most in showing that despite knowing the future, the drama is still there. Seeing Obi-Wan and Vader duel once more, with both learning to accept that Anakin is truly gone, was one of the most impactful moments in the show and all of Star Wars.

Ewan McGregor seamlessly slipped into the role and seeing him play this character once more was an absolute treat. Even though we didn't get to see a ton of him in the flesh, Hayden Christensen was also incredible. When we do see him, you can tell—despite the criticisms of his performances in the past—how much this character means to him.

Moses Ingram and Vivien Lyra Blair were welcome additions to the cast too. While the writing for Ingram's character was clunky at times, her performance rarely faltered. Lyra Blair's Princess Leia stole the show in practically every scene she was in. She embodied what a young Leia should be: Fearless, clever, witty, and ready for anything.

Overall, Obi-Wan Kenobi wasn't on the level of other Star Wars projects like The Mandalorian, but it provided a welcome dose of sentimentality. There are rumors of a potential second season in the works, and Ewan McGregor and Hayden Christensen have both spoken of their interest in reprising the roles again.

However, if this was the last time we saw them both on screen as Obi-Wan and Vader, it was a welcome send-off for both.