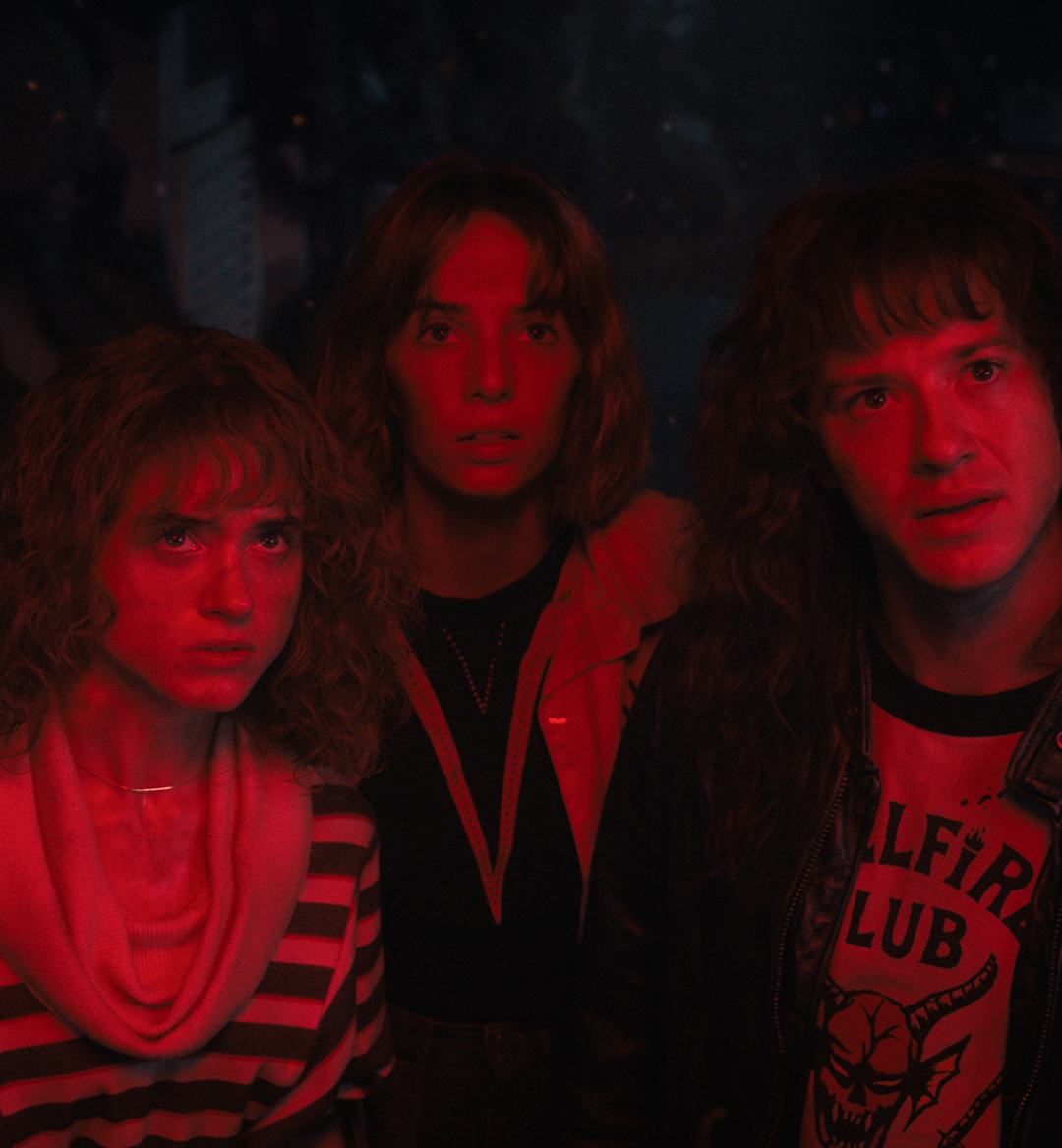 In a (my) perfect world, Barb would be alive, Nancy Wheeler would be stuck in the Upside-Down, Eleven would kill Papa, and Hopper and Joyce Byers would get married. Is it likely that any of these things will happen in Stranger Things' upcoming Season 4, Volume 2? Well, maybe. The newest trailer for Volume 2 was just released, giving us a few hints and confirmations as to what's to come. I touched on some Stranger Things theories a short while ago, but given that the new season is dropping on July 1, let's really dig in and break those predictions down to their cores. These are our official Stranger Things theories for Season 4, Volume 2. 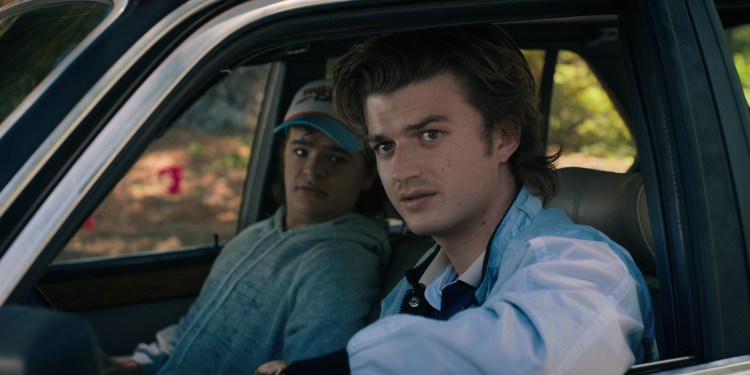 This is one of those Stranger Things theories that I realllllly don't want to happen; alas, I must list it anyway. Listen, the writers did it just last season with Hopper—what makes you think they will hold back with our good buddy, Steve Harrington? Now, I'm not saying that Steve will die in Volume 2, but I could see him sacrificing himself and staying behind to save Nancy (ugh).

I'm not sure how this would physically go down, but since Steve and Nancy have to climb out of the Upside-Down and into reality, he could try and hoist her up and out, landing in Eddie Munson's bedroom. However, that would leave him to take on what's left behind in the Upside-Down. Naturally, he'd be by himself again, just as he initially entered the realm. 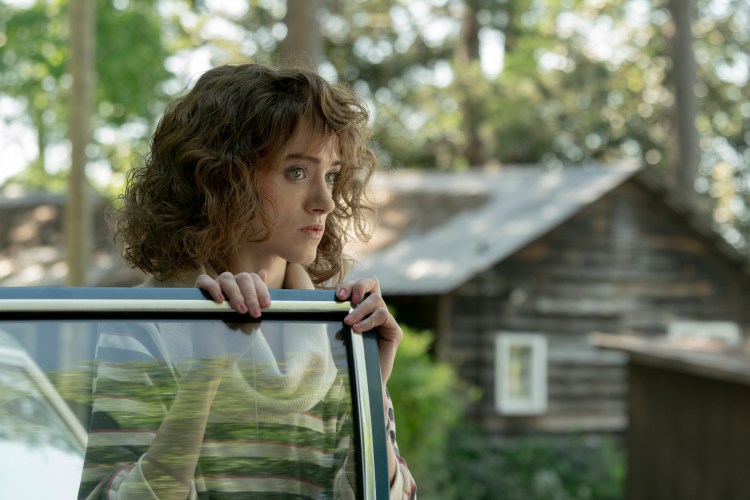 Okay, so this is basically just a flip-flop of the prior theory and I promise it's not just because I absolutely hate Nancy (more on that later), but this is definitely a viable option.

With Robin Buckley and Eddie out of the Upside-Down lying in wait for Steve and Nancy, things are put on an indefinite pause as Nancy is being pulled in by Vecna as a result of her unintentional killing of Barb in Season 1 (RIP, Barb). Does she deserve to get stuck in the Upside-Down? Yes. Listen, she was too preoccupied with Steve to even realize that her girl, Barb, was being viciously murdered by a Demogorgon—that's no good friend in my book.

But back to the main point: if Nancy isn't able to snap herself (or be snapped) out of her current state of mind, it's going to be pretty tough to get her out of there. Also, the latest trailer did reveal that the crew is still fighting in the Upside-Down, which means that Nancy being stuck could actually be true. I suppose Steve could pick her up and force her out, but that would probably prove to be too difficult to accomplish. On the other hand, we saw Robin flicking through Nancy's music collection in her bedroom just a bit ago, so it's possible that strapping a pair of headphones on her will be able to whisk her out. Despite all that, it might just get to the point where Steve has to peace out in order to save himself, leaving Nancy behind in the Upside-Down.

While leaving Nancy stuck is a major possibility, my gut feeling is that the writers will come up with an interesting way to finally retrieve her, even if it means Steve is leaving her behind for the time being.

Okay, this might be one of the more unpopular Stranger Things theories of mine. The cynic in me needs to reject the fact that Joyce and Hopper can safely (and finally) be together after Hopper just narrowly escaped being viciously eaten alive by the Demogorgon. It just can't be that simple—it can't.

Their hug was just a littttttttle too long and they were just a littttttttle too oblivious to the fact that a Demogorgon was being held in just the next room over. Listen, I'd be happy (and relieved) if they weren't confronted by that creature yet again, but this is Stranger Things. I'm not saying that the Demogorgon would kill them—just temporarily thwart them; you know, it makes for good television and all that jazz. While Hopper and Joyce would live, I could see a world where one of their buddies (Murray Bauman or Dmitri Antonov) dies in an effort to save the couple.

Well, at least she better be.

Given what we now know about how Vecna/Peter Ballard works, it seems like we might be getting our girl, Barb, back. Sure, she looks pretty dead at the bottom of that infamous pool, but since Peter was killed, perhaps everyone (including Barb) who had been taken to the Upside-Down will be let loose.

Honestly, if Barb is alive, I'd hope that she'd finally get her revenge on Nancy for being such a terrible friend, but the thing is, Barb is genuinely pure of heart—she'd never do something like that. That's why we love you, Barb.

Okay, one of the more obvious Stranger Things theories is that Eleven gets broken out of the lab she's being held in. I'm not sure if Papa is planning on holding Eleven hostage after the insane string of events that we just saw occur (perhaps he suddenly had a change of heart?), but it's more so in his personality to kidnap children, so let's say he holds Eleven in the lab. With Jonathan Byers' crew on their way to reach her, it's safe to assume that they're going to be the ones who finally break her out (we literally had to suffer through that plotline for the entirety of the season and deserve some sort of reward).

Jonathan's crew's plot has been fairly separate from the rest of the gang this season; saving Nancy would be the most natural way for him to finally reunite with his kind-of girlfriend. If we're still following the theory that this crew saves Eleven, it would make sense for them to travel back with her to the Upside-Down to locate Nancy (that is, if that theory plays out, as well). After all, with the Upside-Down still being shown in the newest Season 4, Volume 2 trailer, it's clear that there's still some unfinished business in there.

The real question: will Jonathancy prevail? Or will Stancy take the crown? While the show has been hinting at Steve and Nancy getting back together since they've been hanging out more this season, let's not forget how close Jonathan and Nancy have gotten over the past three seasons.

Nancy dropped Steve like a hot potato for Jonathan, and up until the beginning of this season, the two were practically glued to each other. Sure, maybe Jonathan doesn't want to go to Emerson anymore, but that doesn't mean the two will simply end things because of that. I'm going to bet that whatever reunion they end up having in Volume 2 will be enough to remind each other of what they have—and that her relationship with Steve is in the past.