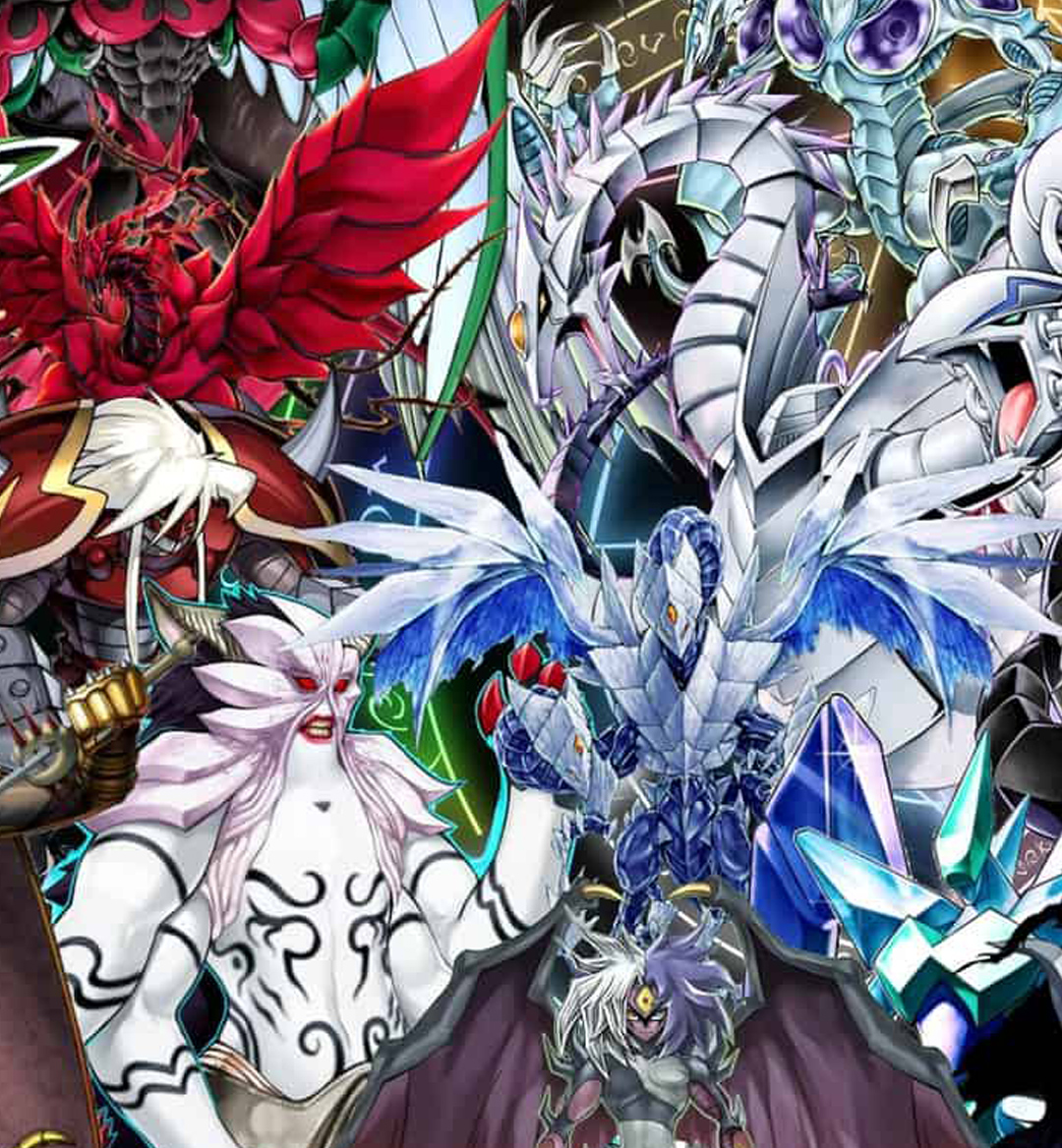 Yu-Gi-Oh! first appeared on our television screens in the late 90s and in the nearly two and a half decades since its first iteration, it has gone through nearly a dozen different forms and remains here to this day. Based on that alone, it deserves a hell of a lot of respect that it doesn’t always get amongst its peers in anime. Today, it remains one of the most well-known card game anime of all time.

Below is our list of the 15 most powerful monsters in Yu-Gi-Oh! Of course, power is relative. We’ve gone with a variety of cards that have been overpowered in tournaments, had the biggest impact in the series, and have a high amount of attack points. Let us know what you think and who makes your list. 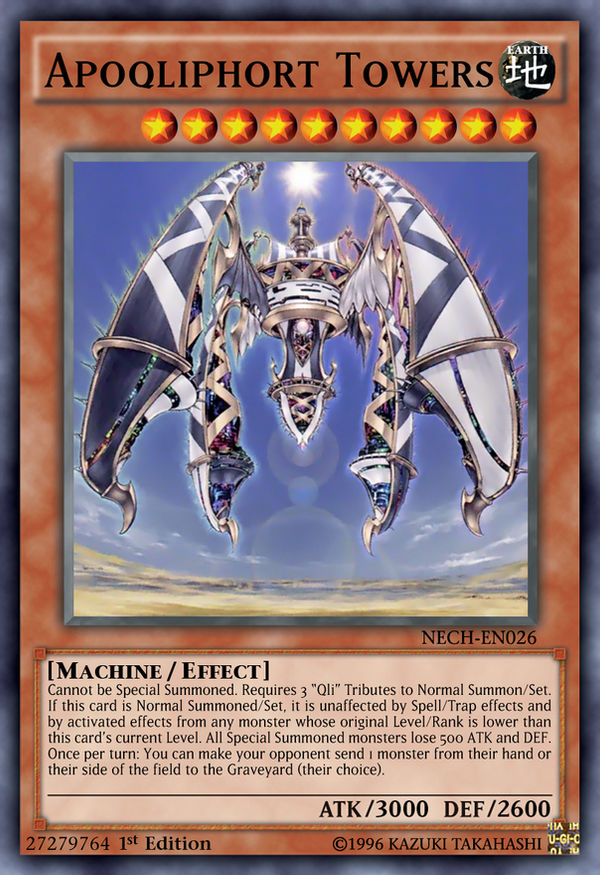 This card is so powerful that it was actually banned from Yu-Gi-Oh! tournaments. For it to be played, three Qliphort monsters must be sacrificed. It cannot be special summoned. Apoqliphort Towers is essentially immune to all spell and trap cards, as well as monsters that are a lower level than itself (10). Basically, it offers almost perfect protection. 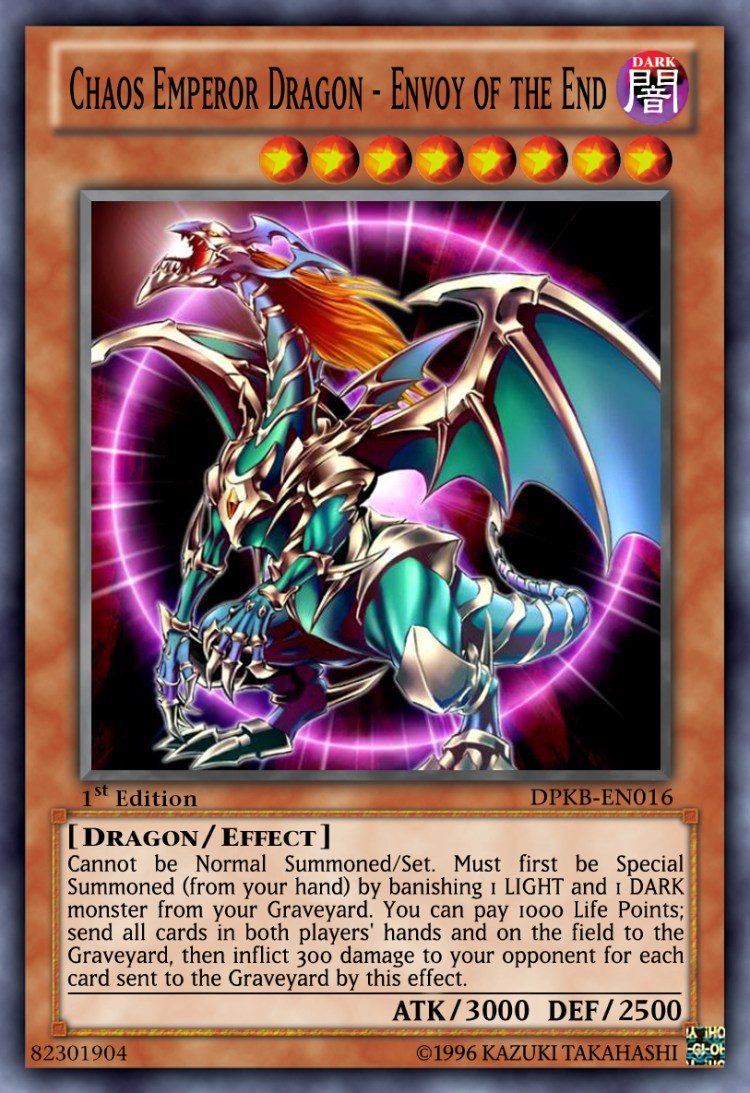 The original overpowered monster in Duel Monsters, you knew this one had to make our list. Not only does Chaos Emperor Dragon allow you to summon one DARK and one LIGHT monster from your graveyard, but if you pay 1,000 life points, you can send all cards on the field and in yours and your opponent’s hand to the graveyard, then do 300 damage for each card that was sent to the graveyard with that effect. It isn’t quite a one-turn kill, but it’s damn close, especially when used with Sangan and Yata-Garasu. Well, before it was banned anyway. 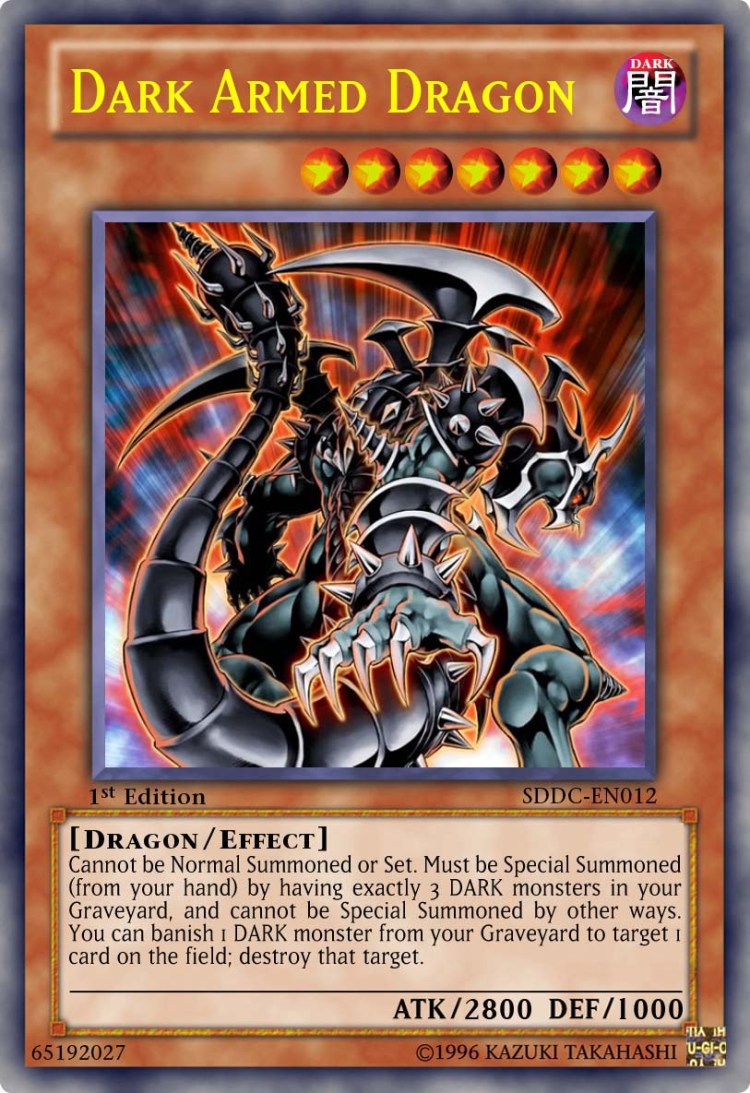 Requiring exactly three DARK monsters in your graveyard to be summoned, Dark Armed Dragon was so powerful that officially for tournaments, you were only allowed one in a deck. Once summoned, you could essentially destroy any three monsters on your opponent’s side. This was a meta for a while and was a main factor in a tier 0 deck. Only allowing players to have one at a time balanced it out a little. 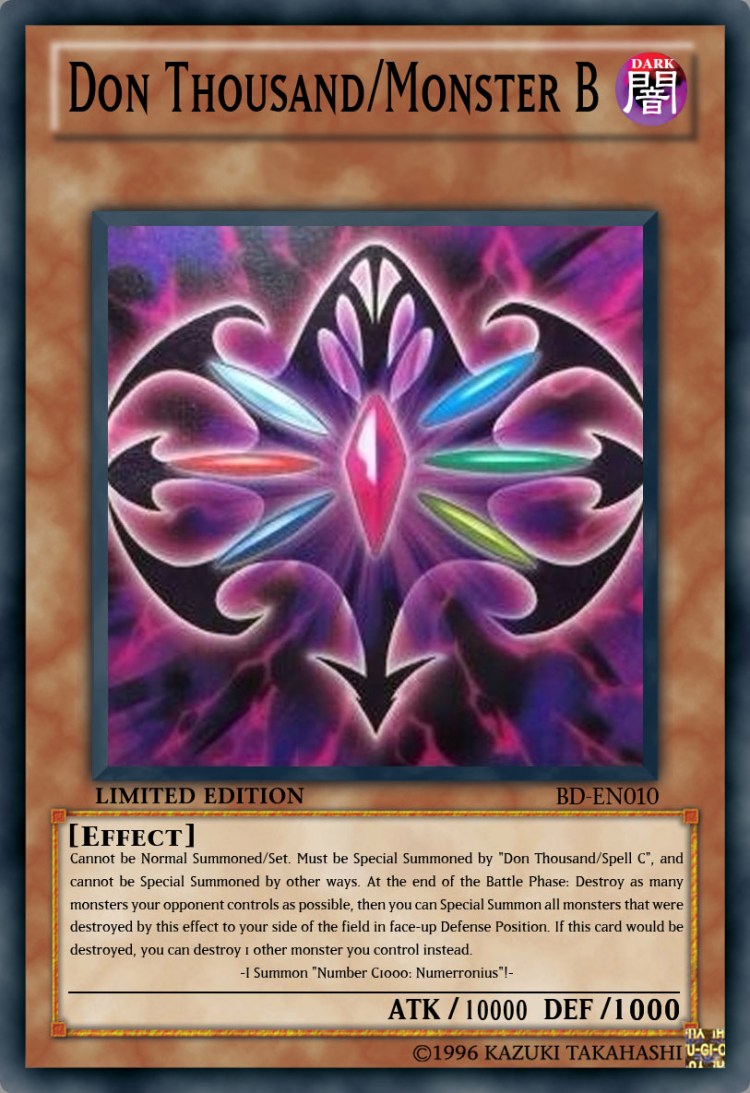 Second only to Don Thousand / Monster C (which also appears on this list) when it comes to its attack points, Don Thousand / Monster B is a beast. It boasts a whopping 10,000 ATK points. When on the field, this card automatically destroys all monsters on the opposite end of the field. To make things worse (for your opponent anyway), if it’s at risk of being destroyed, it can turn around and destroy one of your own monsters to protect itself instead. 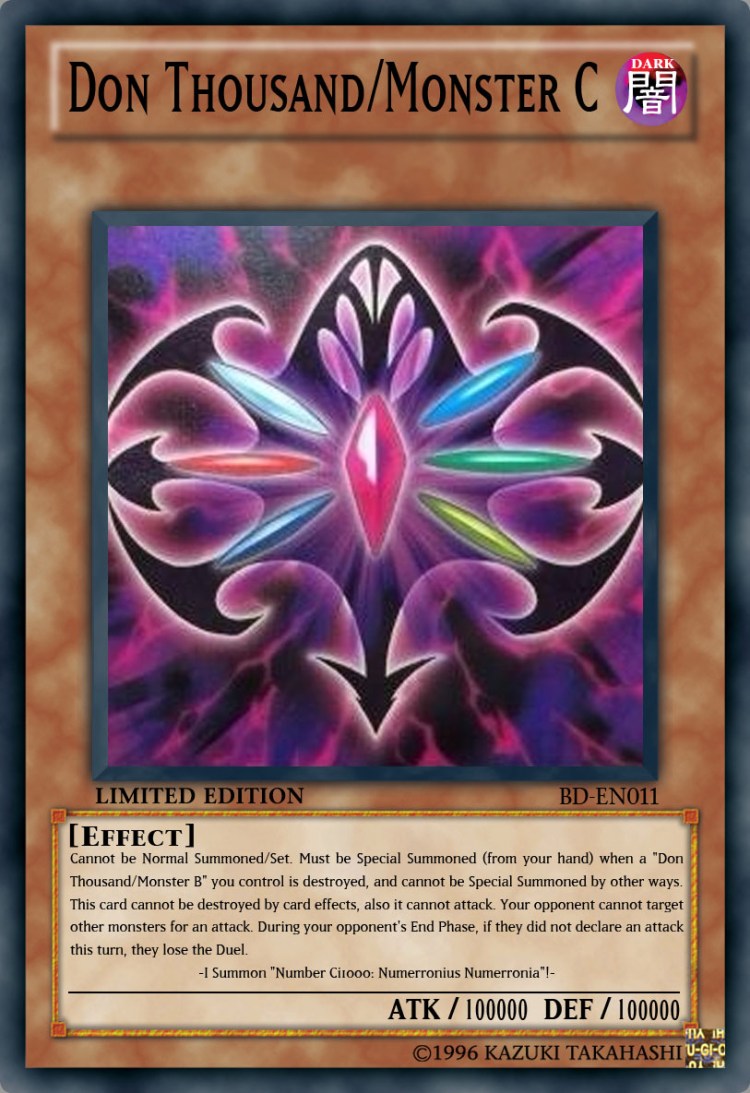 If you follow Yu-Gi-Oh! closely, then you know the name of this card and know exactly why it’s on this list. When it comes to attack points, anything in the 4,000 to 5,000 range was considered powerful for a while, and in the anime, 5,000 was pretty much the maximum any singular card could have without a special ability. Don Thousand / Monster C, however, boasts an unimaginable 10,000 attack and defense points, respectively.

6. Exodia, The Forbidden One 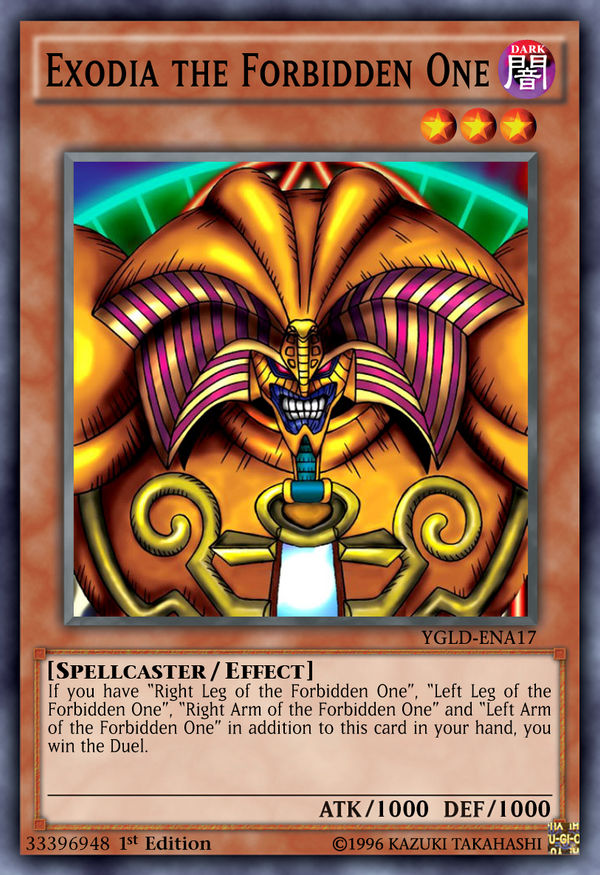 One of the most famous Yu-Gi-Oh! monsters of all time, managing to draw all five pieces of Exodia, The Forbidden One ends the game instantly, so how could it not have made this list? Individually, the pieces are not worth much, but they’re certainly greater than the sum of their parts. You’ll need the heart of the cards for sure because Yugi himself only summoned Exodia once in the entire anime himself. 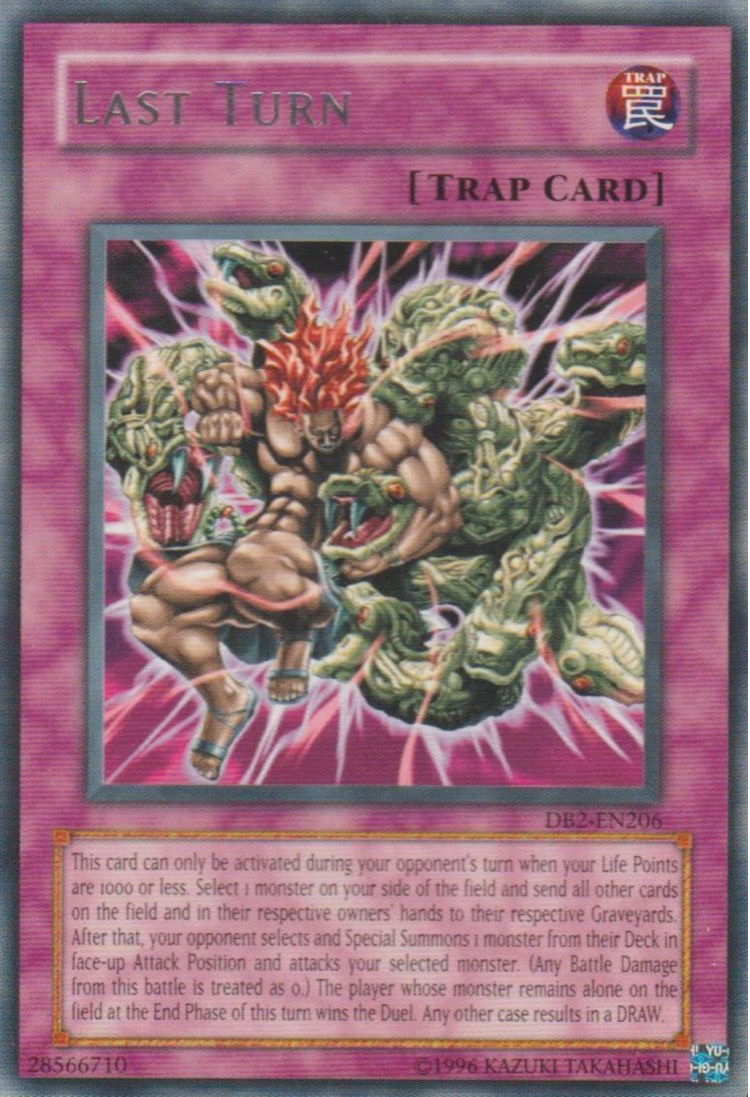 When your life points at 1,000 or less and it’s your opponent’s turn is the only time you can play Last Turn. You pick one monster on your side of the field and send all other cards on the field and in yours and your opponent’s hands to the graveyard. Your opponent then gets to special summon a monster from their deck, but it must be face up in attack position and it must attack the monster you picked. The player whose monster remains wins the duel and any other result means the game is a draw. This type of bail out of course means the card is forbidden. 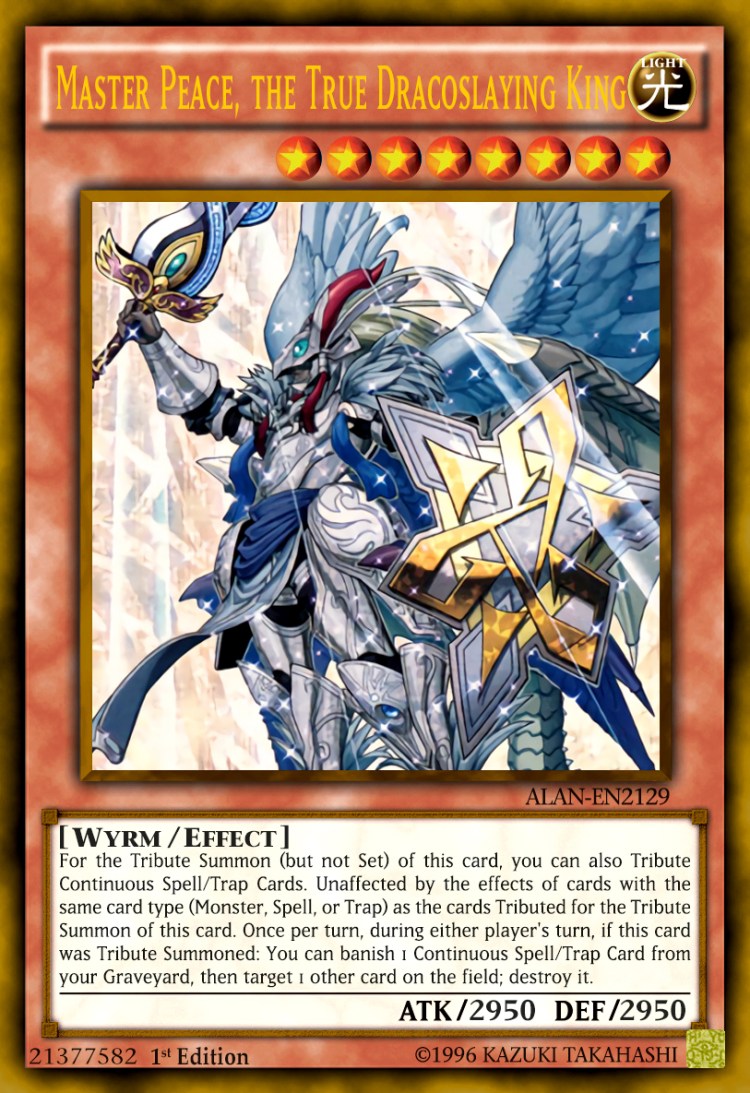 What makes Master Peace, The True Dracoslaying King unique is that it becomes immune to the type of card it was tributed by. So if you tributed a spell card and a trap card for it, it became immune to spell cards and trap cards. If you tributed a trap card a monster card for it, it became immune to trap cards and monster cards. You get the point. This made for an incredibly overpowered card that could often only be beaten with a monster with 3,000 attack points or more if someone got lucky. This resulted in its ban. 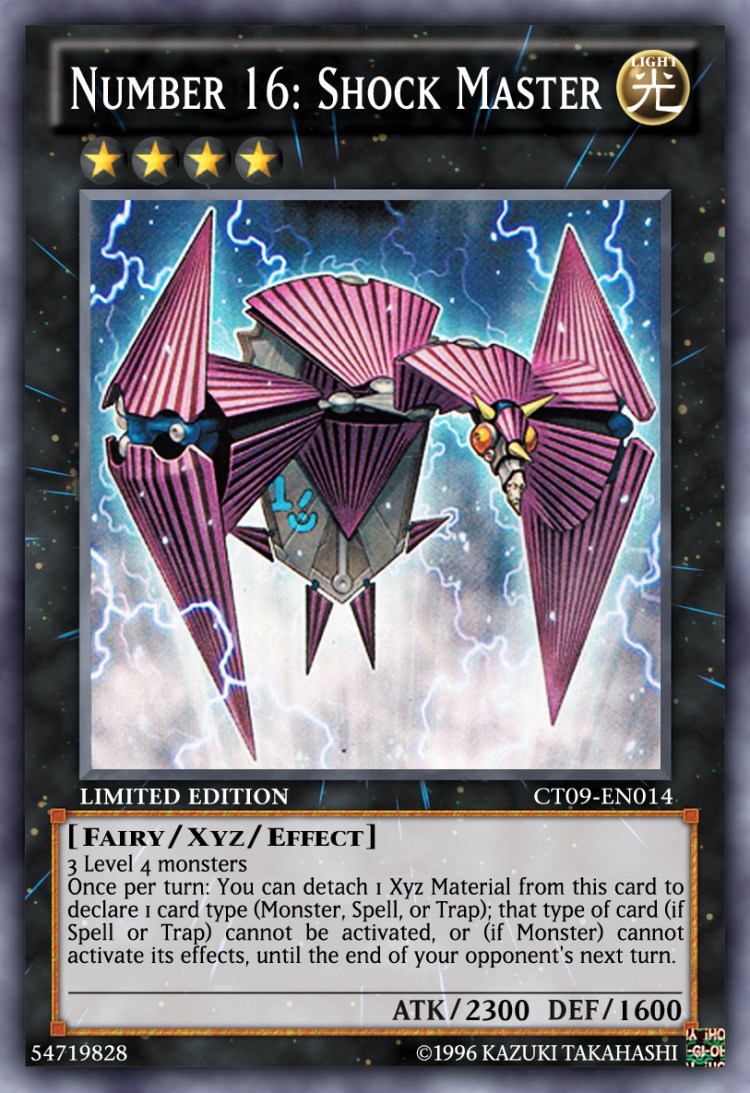 Don’t be fooled by the fact that this card is just a level 4 and has 2300 ATK points and 1600 DEF points. Number 16: Shock Master has the ability to nullify one monster, spell or trap card on the opponent’s side of the field per turn. But here’s what made it even more powerful. At one point, you could play multiple at a time and each one could take away a card on the opponent’s side, leaving them helpless, essentially not getting their turn. 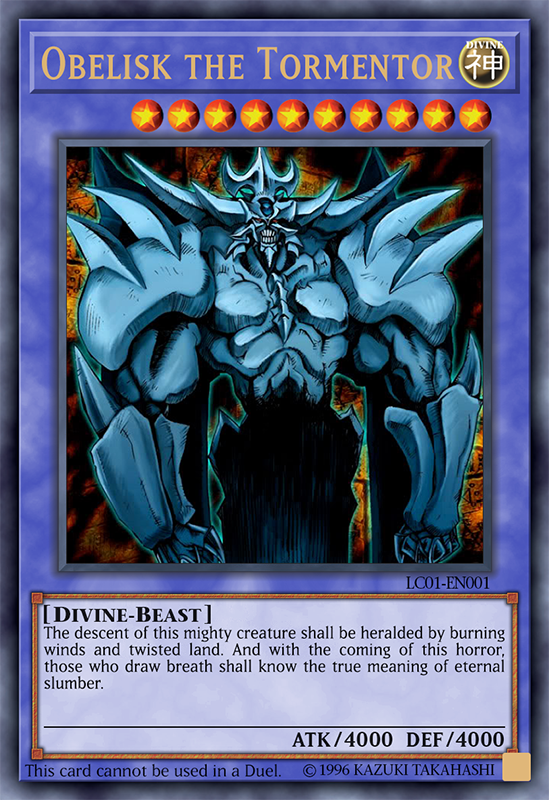 Sure, in tournaments, the Egyptian God cards’ flaws start to show a little bit, and they’re hardly used. But their power and importance in the anime truly cannot be overstated. Obelisk is probably objectively the weakest of the three God cards, but it’s still more than deserving of a spot on this list. If the player tributes two other monsters on the field during their battle phase, Obelisk gains unlimited attack power. It can also attack a player directly and take away all of the opponent’s monsters. 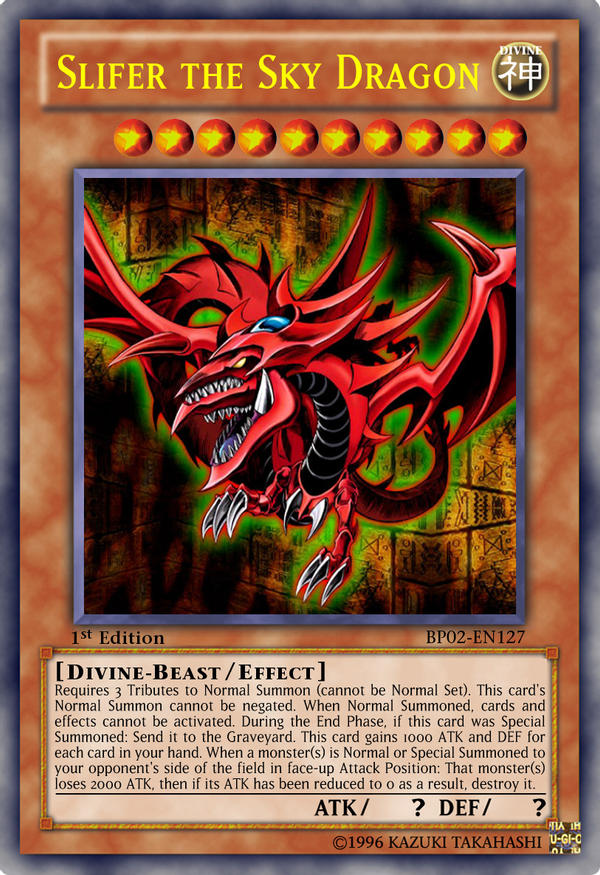 The second most powerful of the Egyptian God cards, Slifer The Sky Dragon is known well because it’s a card Yugi goes to a lot after he wins it. Slifer is powerful because it gains 1,000 attack and defense points for every card the player has in their hands. It also becomes the target of all opponents’ effects despite being immune, takes away 2,000 attack points from monsters in the attack position, and destroys them if they’re at 0 attack points. 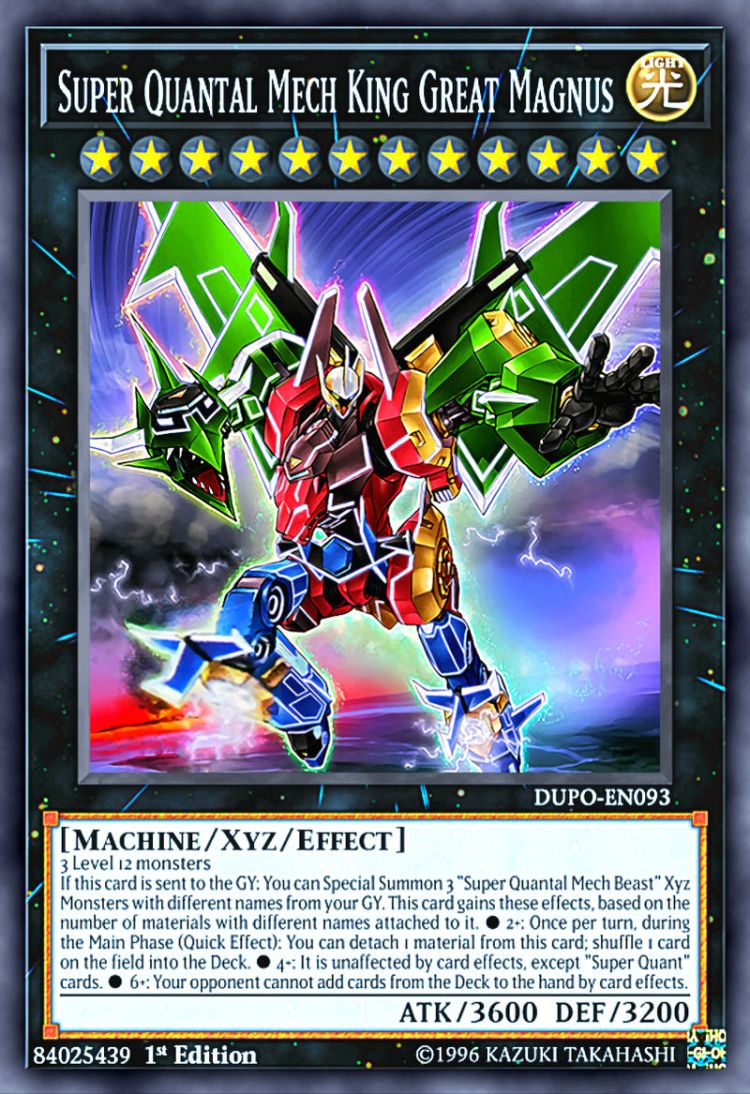 Depending on how many XYZ materials you have for it, this card can get insanely powerful. With 2 or more, you can detach one material to take a card on the field and shuffle it, with 4 or more it becomes unaffected by all card effects except Super Quant cards and with 6 or more, your opponent cannot add cards to their hand. 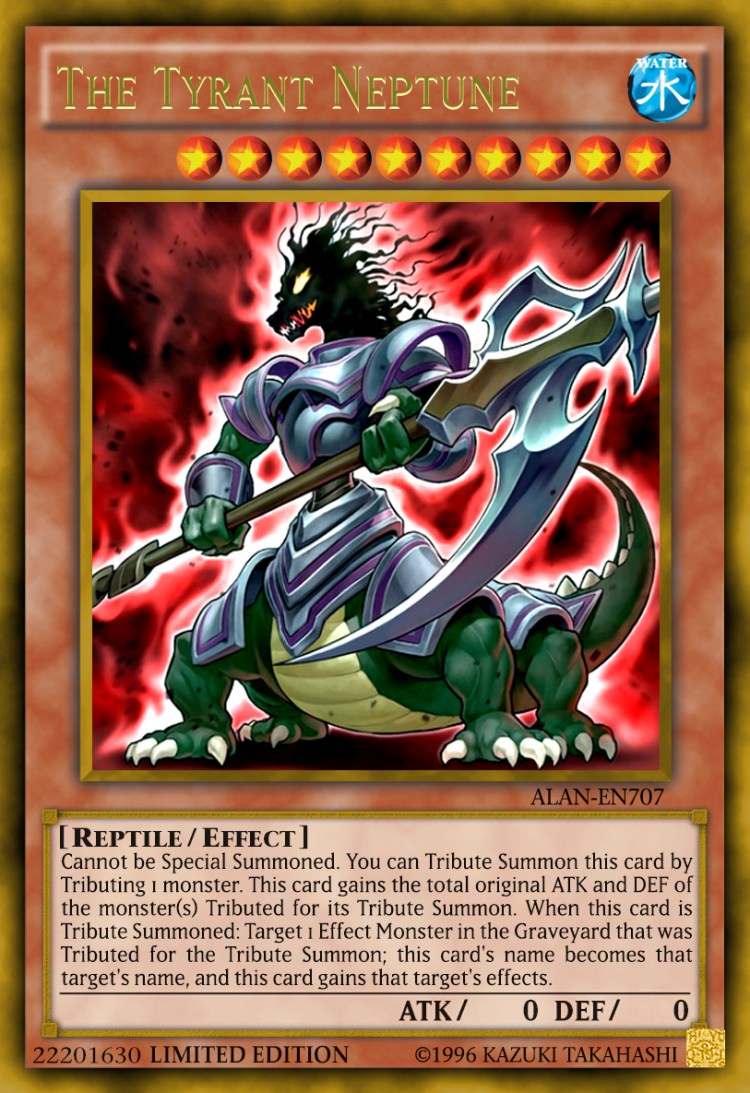 Don’t be fooled by the 0 attack and 0 defense on The Tyrant Neptune. For a certain amount of time in tournaments, this card was almost broken because of how overpowered it could be. When you used Instant Fusion to bring out Lyrical Luscinia – Independent Nightingale and then tributed it for this card, its special effects mean it would be unaffected by anything with 6,000 attack points and would inflict 5,000 burn damage per turn. That’s what resulted in its ban a few years ago.

14. The Winged Dragon Of Ra 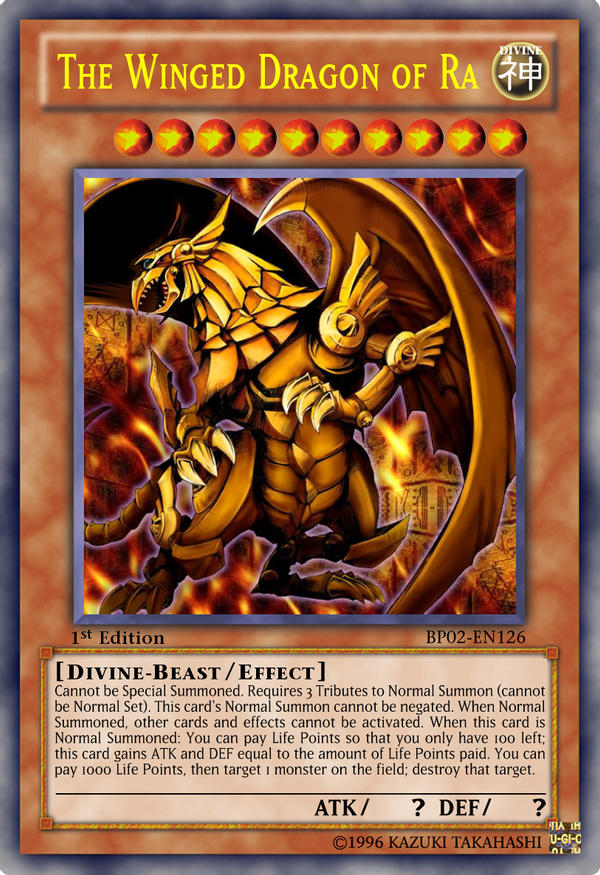 Considered to be the most powerful of all of the Egyptian God cards, The Winged Dragon Of Ra being summoned makes for some epic moments in the anime. The attack and defense points for it are made up of the total of the three cards you tribute for it. You also have the option of giving up all but one of your life points (so 7,999 out of your 8,000 starting points, for example) and making those all attack points for the monster.

If that were not enough, Ra’s God Phoenix ability allows for the player to pay 1,000 life points for it to attack and destroy all of the opponent’s monsters. Just like the other God cards, this one feels like an instant win. 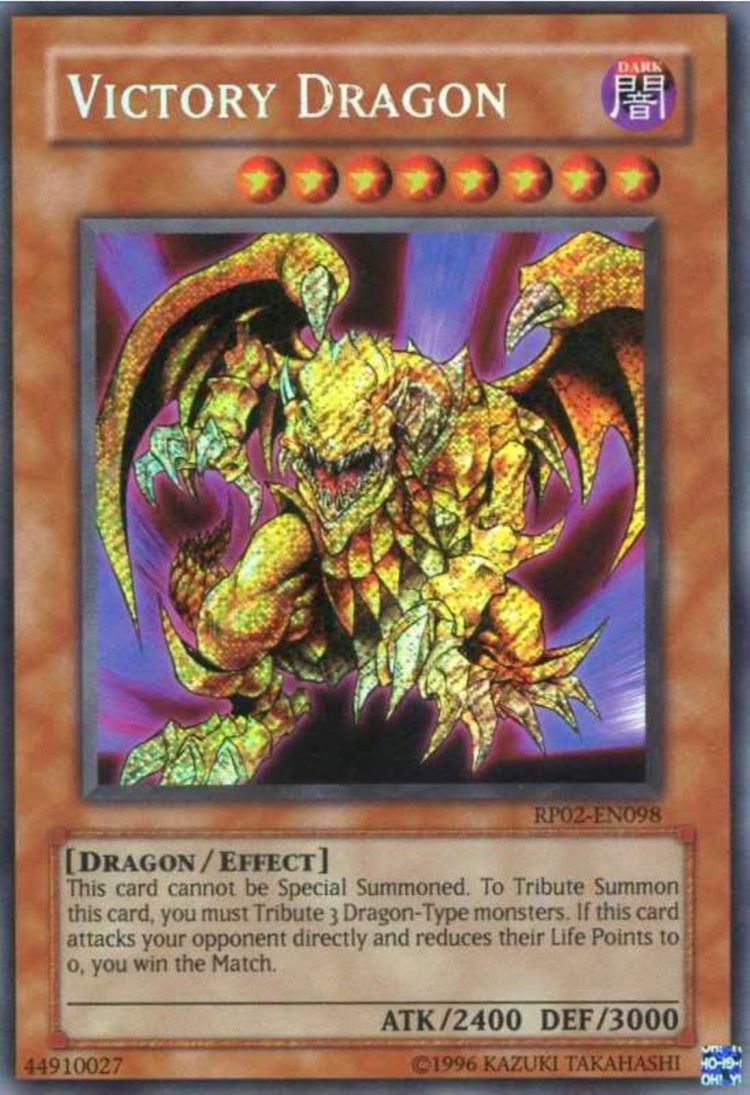 The clue is in the name here. This card was specifically overly powerful in tournaments and has since been banned. Matches are sets of three duels with the winner of course having to win two of the three. However, if you win a duel by attacking with Victory Dragon, you have won the entire match. It was banned not only for this insane rule, but because people forfeited before they were attacked by it, perhaps rightfully so, nullifying it.